Tutorial: How To Get Models From Videogames For Pepakura

Hi everyone I'm going to give a short tutorial on how to get models from videogames whether they are PC, Gamecube, Dreamcast, Wii, XBox360, etc. With all games it all depends on the style of game engine that the game uses on whether or not you can extract from the game.
So to start with PC/Wii/Gamecube/Dreamcast:
Most likely the scenes will come out squeezed or stretched in some way. I use the scale tool in a 3d software(for me Blender or SketchUp). Also it rips the whole scene so you will need to clean all the 'junk" geometry around the model you want.
Something to know before starting is that it only supports DirectX9 games or emulators. For emulators you can change the graphics plugin that uses directx9. If you need help on a emulator just let me know here or a PM. Preferred on this post.
First you need to download the two programs.
http://www.deep-shadows.com/hax/3DRipperDX.htm
Just found out they have a forum also
http://www.deep-shadows.com/hax/forum2/index.php
They have a quick tutorial as well. Might be useful but I'll be explaining it a little different.
The textures you rip will be .dds format so you will need the DDS Converter to convert them to .png, jpeg or whatever you choose. Go here to download
http://www.filefront.com/4470512/DDS-Converter-2.1/

Uploaded with ImageShack.us
After you install the program its time to run it.
Photo shows how I set it up when ripping. I put frames, textures, shaders in the same directory. You don't need to but thats just how I do it. Make sure "Also Capture to Wavefront .OBJ is checked. Very important.
Note: Some games/emulators may use the "F12" key and that can give you problems when you want to rip a scene sense F12 is the capture button as well. So I make sure F12 key isn't used on the game/emulator. Or you can change what "F" key to use in 3D Ripper DX where it says "Capture key". I think some emulators might use F12 to exit so its good thing to know about.
After you click Launch you will see in the top left corner in yellow the words "Ready to Capture". The program you see here is called Dolphin it's a Wii Emulator. But this technique should work with just about any emulator or game that's running under DirectX9.

Uploaded with ImageShack.us
Thats how you will know if everything is working. If it doesn't say that then more than likely its becuase its not directx9 or plugin settings aren't set for directx9(emulators).
After you press the capture button(F12 default) it should be Capturing the scene. You will see red words that say something like "This could take up to 5 minutes.....". Most the time it doesn't take long at all. If its a newer game and/or you got a slow computer it might take longer.
Sometimes it goes so fast I don't even see if it captured. You will know if it freezes for a sec or sometimes I just goto the folder I saved the scene to and if I see files there then I know I ripped it right and can exit without having to redo everything.
After that is finished you can exit out of it and start your editing.
I first convert the .dds textures files using that DDS Converter program.
Then I open the .obj in Blender and so on from there.
---------------------------------------------------------------------
Now that covers the PC/Emulator type games, for XBox360 games those can be even more tricky but I'm going to give a quick tutorial on how to extract models from a game such as Mortal Kombat 9.
First use PowerISO to extract the ISO when you put the disc into your computer and once the ISO is extracted from the disc use Xbox 360 ISO EXTRACT to extract all the files from the ISO. But then you arent finished, the files are in xxx format not psk. So you have to download UModel: UE Viewer | Gildor's Homepage
Use that to take the Source files out of the xxx files, import the .psk character file for each character with Milkshape it will be in the Skeletal Mesh folder, and have something like Rain.psk for the file name, remove the skeleton from the model, break down the armor sections, that's where it becomes a real challenge most of the models will have over 100 model groups, and it's like a puzzle. After you break down the sections you want you will more than likely have to do some more cleanup with a alternate 3D program like for me I use Metasequoia LE or Blender, save the MQO or OBJ file and then open up in Pepakura Designer, and take your time unfolding the file. Getting the DLC characters is a bit more of a challenge, but essentially the same process.
If you have any questions please feel free to ask me here or send me a PM and I'll see what I can do to help.

That is so cool.

Of course you lost me right after "Hi everyone I'm going to give a short tutorial..." but I read it all anyways and would be willing to give it a try.

I always wanted to do a model of the Martian Machines from Jeff Wanes War of the Worlds. 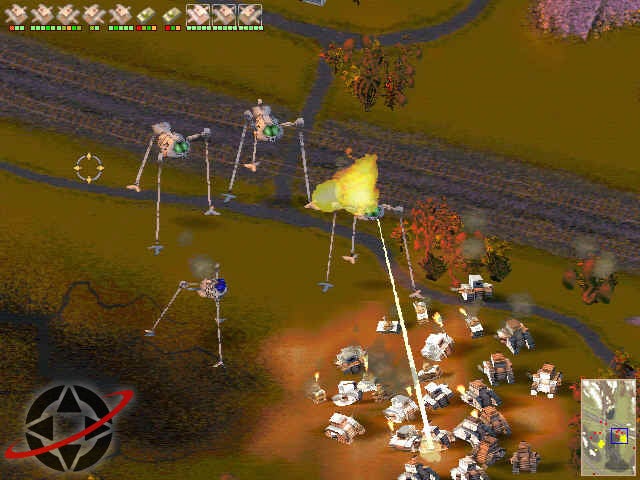 You should have no problem getting those that looks like a old PC game so I would expect those War Machine models to have under 50 polys. Yeah no so short of a tutorial, but still should help some people that want to learn how this is done.

Thanks for this, i've been wondering how to get the models out of xbox games for a while now.
P

No problem , some XBOX games can be harder than other's really it all depends on what kind of game engine the XBOX game is running on that will depend on how you go about getting models out of it. You can still use the same principal as above with getting MK9 Models for instance, but the file formats for the models are different for different game engines.
P

Here's a short list of Videogame File Types. Most of these can be imported via Milkshape some have to be converted though using a program such as Gildors or the Crafty Object Viewer for games such as Half-Life.
http://www.fileinfo.com/filetypes/game

i tried to do this with darksiders for xbox 360, but couldnt achieve anything, the files are in .ifo .bup
P

Hmm did you already make a ISO of the disk? And have you used a program for Extracting the XBOX 360 files from the ISO? If yes to both of those I would suggest trying to use Noesis Señor Casaroja's Engineering Oasis or get in touch with the people at the Xentax forum forum.xentax.com for help on it. I have'nt pulled anything from Darksiders but I know a lot of people have had problems getting models from it.

I unfortunately have to use my wife's' computer and since she relies on it for her classes I have been banned from trying to download and teach myself anything like this until I can afford my own computer...lol. I have a few things that I want to do from Skyrim. The first being the wabbajack, as well as some of the glass and daedric armors and weapons... If you happen to know where I could even find some decent screen grabs of these items from various angles please let me know. Thanks

Hey I was wondering if someone has an official halo recon helmet?
P

I've been working on Skyrim stuff. Just remember, please do not turn this into a request thread. EAGON, not sure what you mean but you might want to check out the 405th.
Skyrim Character OBJ Models.zip

Yea I was looking at the 405th I'm not what file type I'm going to find is UNiversal type .obj or do u think I could get an .iges? (not for pep but for machining (CNC))
P

Are you trying to have the Scout Helmet CNC milled or are you just looking for the pepakura file. If you want to have it milled, I don't think any of the Scout Helmets over there are high poly enough for milling without a lot of extra work, plus you would have to seal off the model, and convert the obj if it's a triangle mesh to quads, and convert the obj file to stl.

ECk this maybe hard do u know where i can find a .stl or .step or .iges of A halo reach recon helmet
P

I'll see what I can do for you, let's just leave this thread for discussion pertaining to the topic for now. I'll contact you via PM when I have something.
R

Pm once again you're a hero gonna try this on arkham city tomrrow unless someone else allready has the models ripped for me?

Pep you're my hero! Thanks for the tutorial.
R

did anyone get this to work with arkham city ?
cause i cant seem to get it to work :/
P

Different games will have different filetypes, sometimes the file will be encrypted, or unusable, what filetypes were you able to extract?
R

nothing lol, it started and everything but nothing ended up happening.
but im just going to model everything i need i think
you up for any unfolding tonight ? haha

B
Electronics for the EMG/Matrix Aliens Pulse rifle.