Next is a concept sketch of what my mask will look like.


Well... I'll be posting more (Hopefully soon...) of my suit's progress. Let me know whacha think and if ya got any ideas. 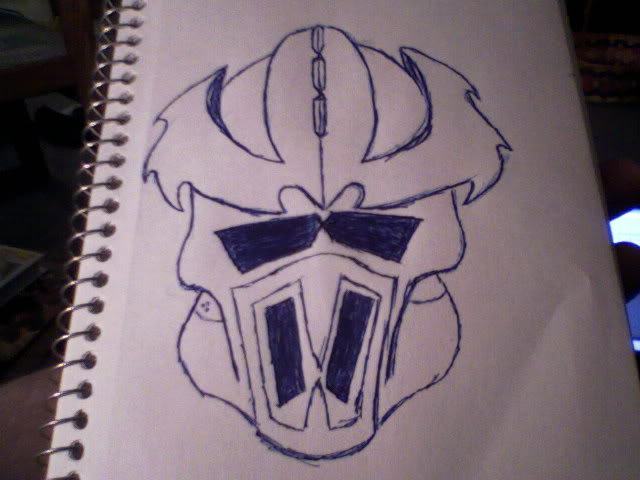 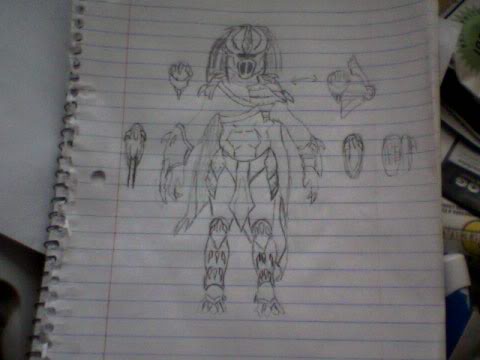 Some nice concepts there, I personally would alter the angle of the eyes upward, sloping them down makes the face look sad (IMO).

That's exactly what i was thinking. So I'll probably go with the eyes from my armor sketch. I didn't wanna give a "Yeah, I'm hunting you, but I'm sad about it" impression. Lol.

Wow... Been a while since I was able to update this thread. But now I'm startin' ta get stuff done.
First, I got my mask. A Lee P2. Here's the pic. 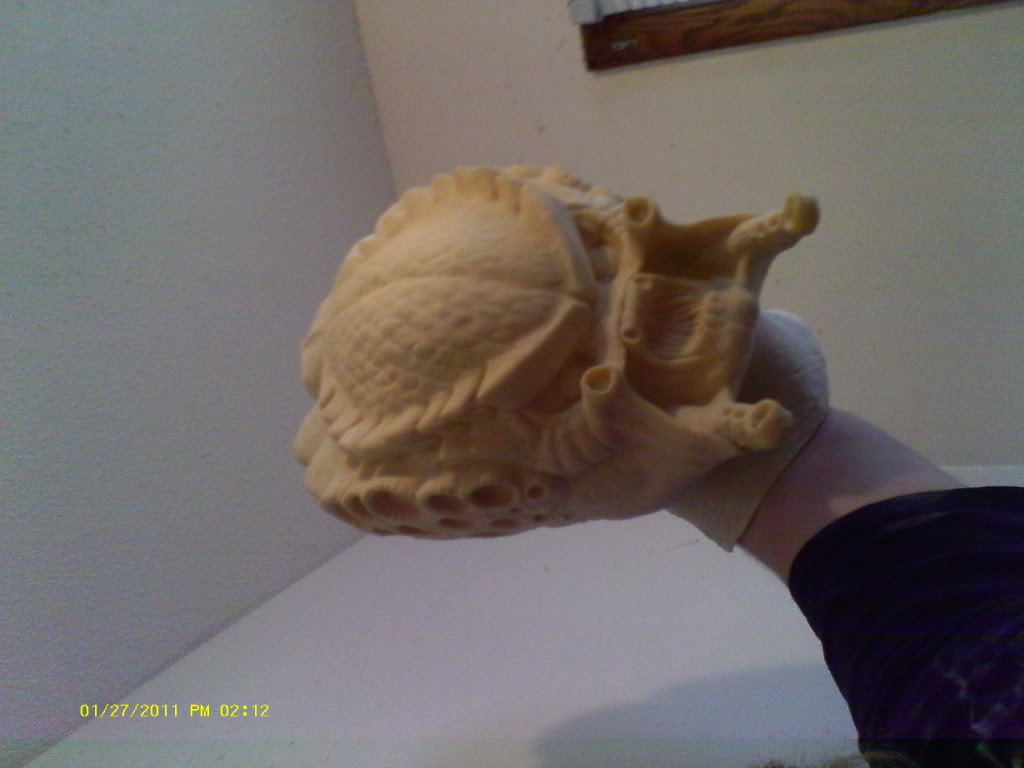 So, now for the bio. I changed my concept quite a bit. Here's the new sketches. 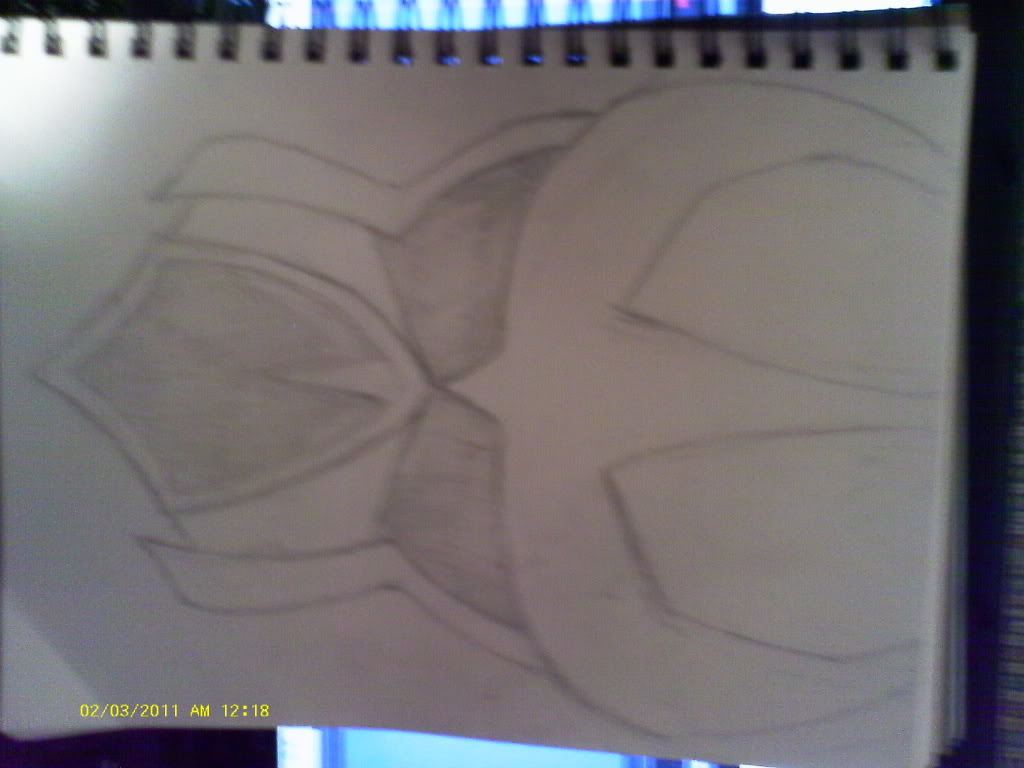 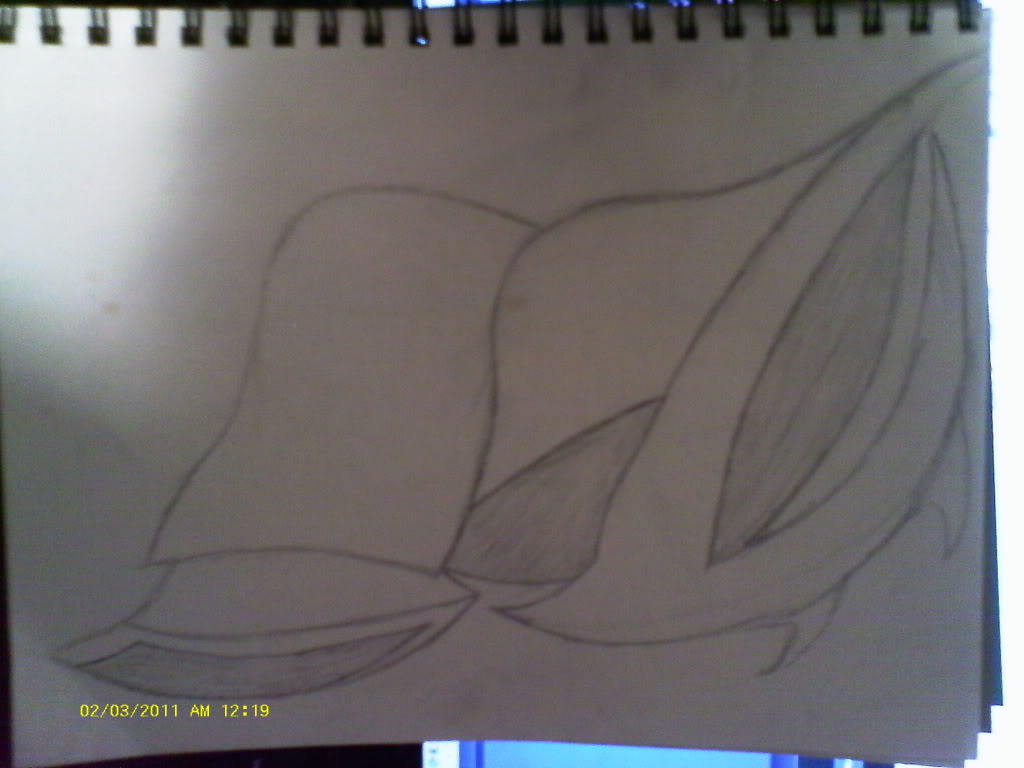 So I'm ready to start my bio, right? Wrong! I know nothing about sculpting or casting, so I turn ta good ol' Elkman for help.

First thing we did was wrap the mask in cling wrap to make sure none of the plaster got on it. 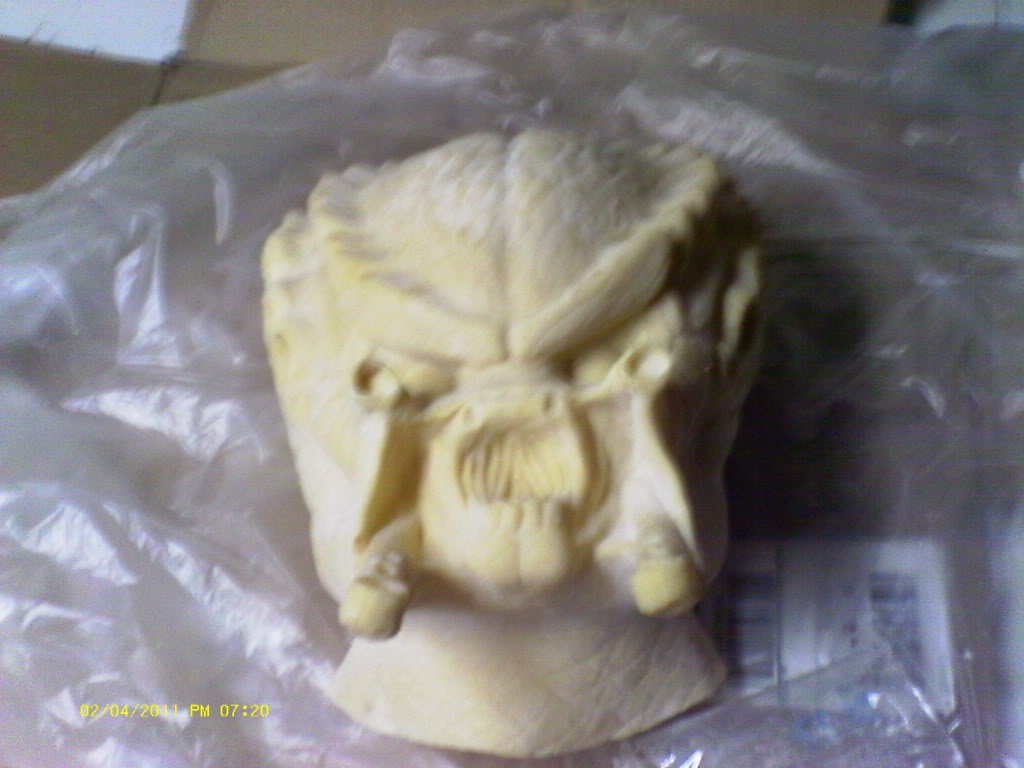 Next we coated the bio area in Rigid Wrap Plaster Bandages (Yes, those are Todd's hands. Someone had ta take the picture! ) 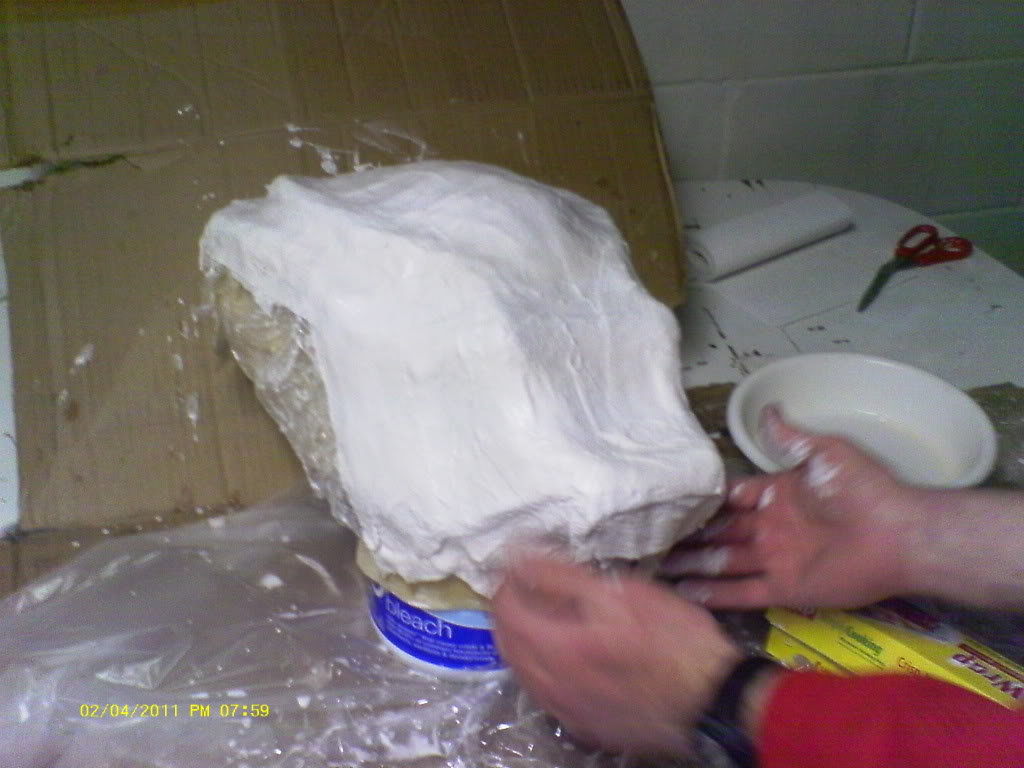 Once we got the shape we'd need, we let it sit for about 45 minutes, but it was still a bit wet, so we threw it in the oven and baked it for
about ten minutes. Turned out pretty good. 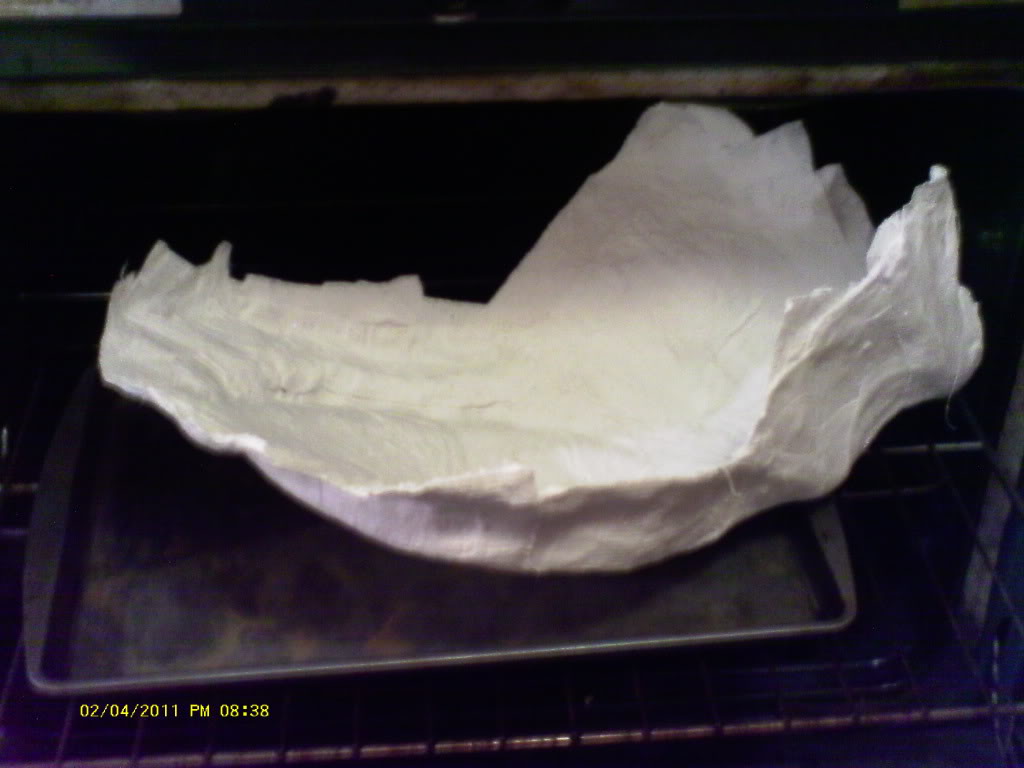 After that, we brainstormed a bit to see how we were going get this to work. But that's it for one day. Now I've sent the cast as
well as my sketches home with Todd. Can't wait ta see how this project's going to turn out.

Next on the agenda are my gauntlets, so stay tuned, kiddies!

Excellent man!!! I will be doing the same tihng for when i sculpt my bio!!! Cant wait to see more progress bro!

exciting to see two of my favorite things come together like this!
can't wait for the final product!!!

I think I like it. The profile sketch is awesome. Not so sure about the face on just yet; but it's not in 3D so I can't really tell.

Thanks, guys. as soon as I have some more pics, I'll be posting them up. Todd's workin' on his leather mask first, so the bio's on the back burner so to speak. So while I'm waiting, I'll be working on the rest of the stuff, starting with the gauntlets and armor.

And, yeah, I know I messed up sketching the front view, but at least there's a ton of reference pics for us to use!

I'm really digging this thread. The updates on the bio are great, however, what happened to the shredder blades on the rim of the bio? Would love to see those reincorporated. Also, are you planning on incorporating a laser shroud in it, somewhere?

There are three blades that make up the top part of the bio. There's going to be one sticking up in the middle, and the two on the sides will be attached to the biohelmet and then start projecting away around the back of the head. It's hard to recognize it from that picture, but Travis and I discussed it for a while until I finally figured out how it was going to work.

Actually, one of the Predator comics, "Bad Blood", has an Arbitrator character with a bio sort of reminiscent of the three spikes, although the two on the sides will be closer to the main helmet than this picture: 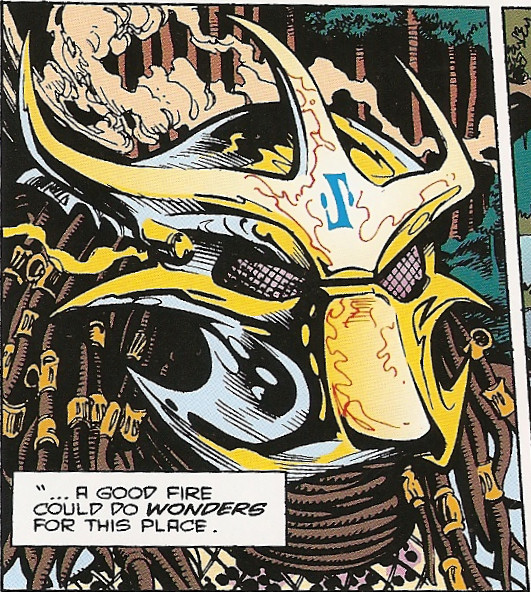 I'm probably going to sculpt the two side pieces along with the helmet, but the center spike will probably have to be a separate piece unless I can figure out how to model and mold such a hellacious undercut.

As far as a laser shroud goes, that sounds like we either made an oversight, or there isn't supposed to be one. Travis, what do you think?

Yeah, tell me about it! I was thinking about that after ya left. We could probably work it so we can attach it on the side that that arbitrator pic you posted. On the other hand, it is supposed to be based off the Shredder. Not a gun user. So I was thinking about going all blades and no plasma caster. What do y'all think? I'd like some input.

Wow... It's been forever since I updated this thread. Okay. First off, I deleted my last post on my gauntlets because they were an epic failure.

My original idea was to use a ren fest gauntlet as the base and then cover it in foam and cut out a slot for a moveable track for the blades. As stated before, failure.

So, I started from scratch.

I went looking through the threads here and came across several threads that were pretty helpful. The first was Master Anubis's gauntlet huntorial. The second was aaron1126's build thread. They both had some great ideas for gauntlets and would work well with the materials I had.

First up, the base of the gauntlet. I decided to go with Aaron's idea of a soccer shin guard. 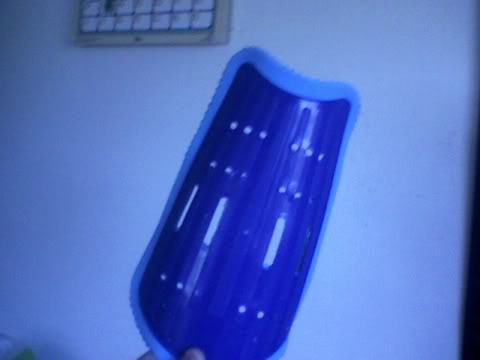 And what I would attach it to would be an item pusher from work. You can see these things in most stores, they push items forward on the shelves when someone takes one off. 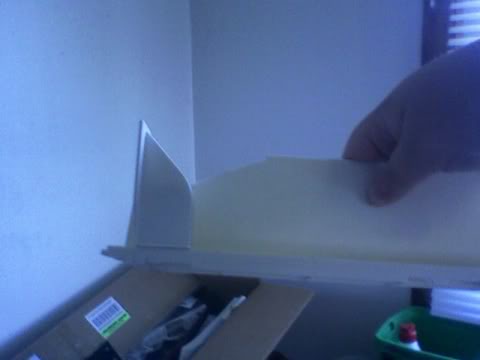 These are propelled by a rolled up strip of metal and it moves pretty fast.

So, I took my blades and attached them to a small block of wood and then attached that to my pusher. I cut a hole in the track so I could work in a catch to hold the blades back and then release them.

On the underside of the track, I attached a small, flexible strip of plastic and attached a wedge shaped block to it that would fit up inside the hole I had cut in the track and into a hole I had drilled in the wooden block. Now, all I had to do was attach a string to the plastic strip on the under side of the track, so when I pull the string, it pulled the wedge out of the block, letting the pusher do its job and send the blades forward.
Once I had all that set up, I bolted the pusher to the shin guard and here's what I got. 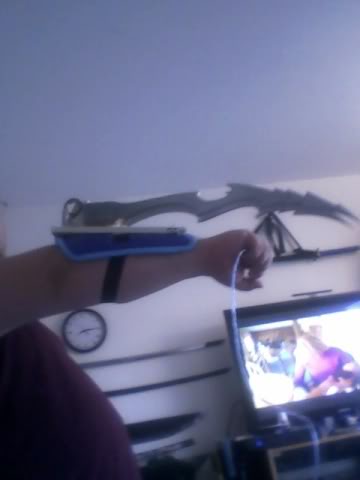 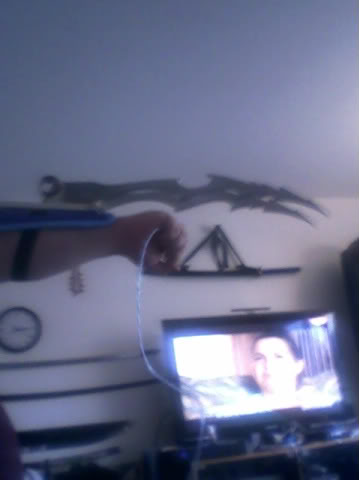 I'll post again once I finish the cover. I'm going to make the basic shape out of cardboard and paper mache, then mold foamies around it and toughen them up with a water/glue mix.

So, as always, let me know whacha think.

And a special thanks to Master Anubis and Aaron1126 for the ideas!

'Ello. Finally got something to update!

My newest addition to my suit is my neck ring. Since my armor's all going to be Japanese themed, I decided that I didn't want a traditional neck ring. so, I went with a Nodowa. That's the neck armor that you see hanging from a samurai's mempo that guards the throat. And since I don't know the first thing about working with latex, I went with leather. I owe Todd (Elkman) a big thank you for his help with working with the leather and supplying the parts I needed in return for doing a little yard work for him. Yes, WILL WORK FOR PRED PARTS. LOL Anyways, here's the pics of the finished piece, on and off my mask.

The lacing didn't really show up in this pic, but you can see the overall shape. 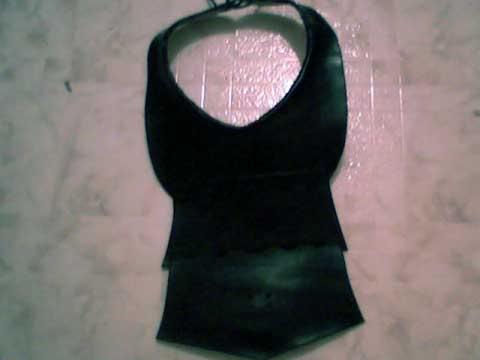 Here's a closeup of the leather lace work. You can also see my pred's clan symbol in the top section. 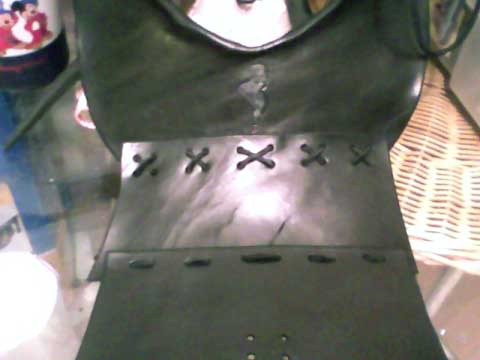 And now, a few pics of it on my mask. 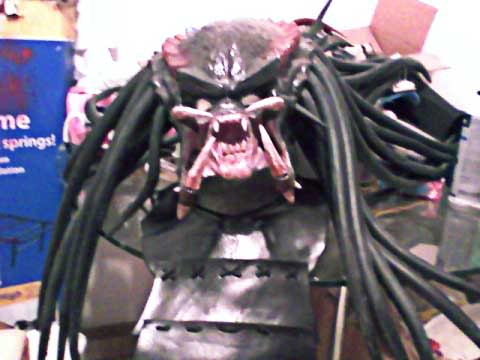 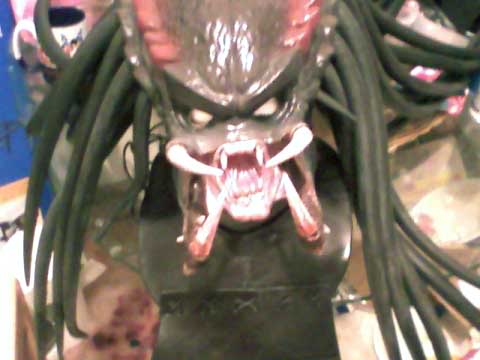 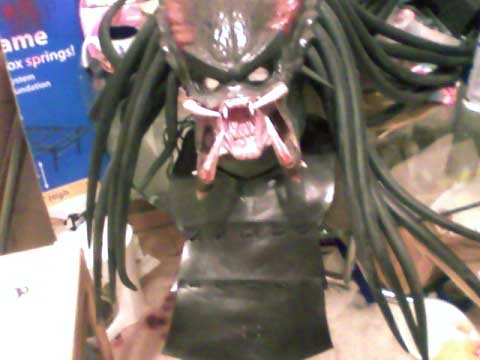 You can see that there's still 4 holes punched into the bottom section that are still empty. I have a snapping turtle skull on its way, but it may take another 2 weeks to get here.