RPF PREMIUM MEMBER
Had occasion to make another copy of this suit a while back. There were a few things I didn't like about how the first two had come together, so I came up with some fixes.

First was the lower legs. I was never really happy with how they fit together and the calves tended to rattle loose or fall off from time to time. To make a rock-solid connection, I picked up some of these handy lever latches: LINK.

Then I added a blob of bondo glass to each corner and mounted them inside the lower legs like so: 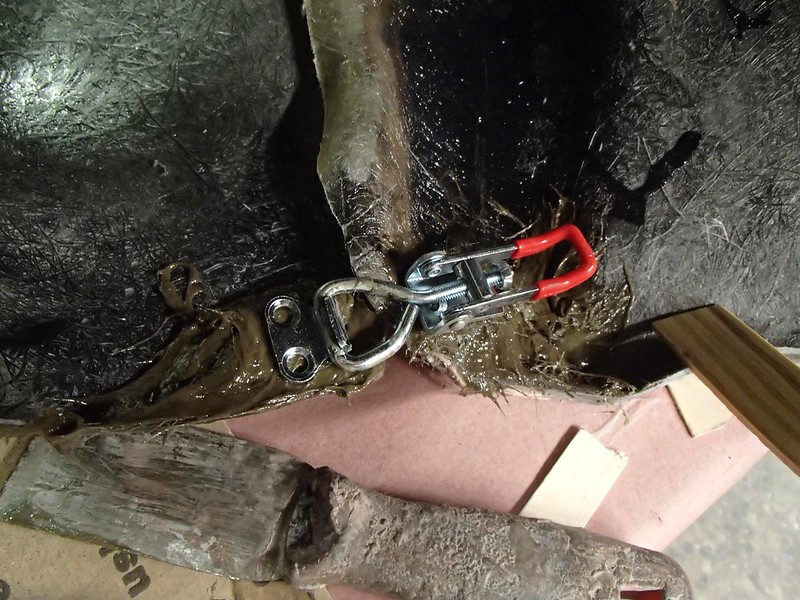 This assembly was installed at the top and bottom of each seam in the lower legs: 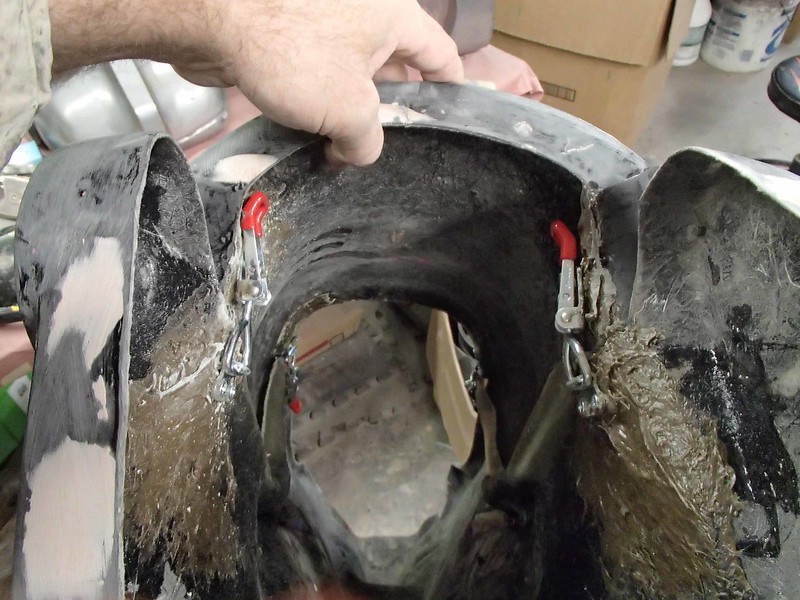 The end result is less than pretty, but it keeps everything in place: 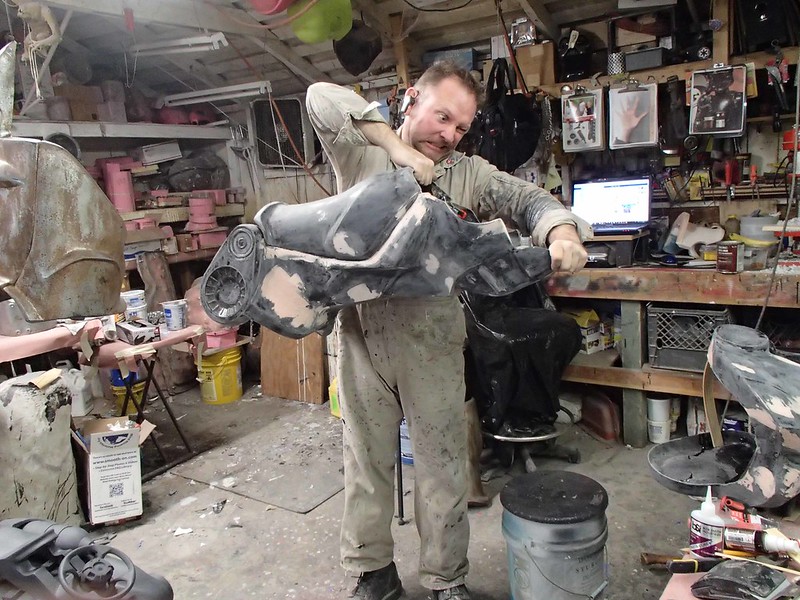 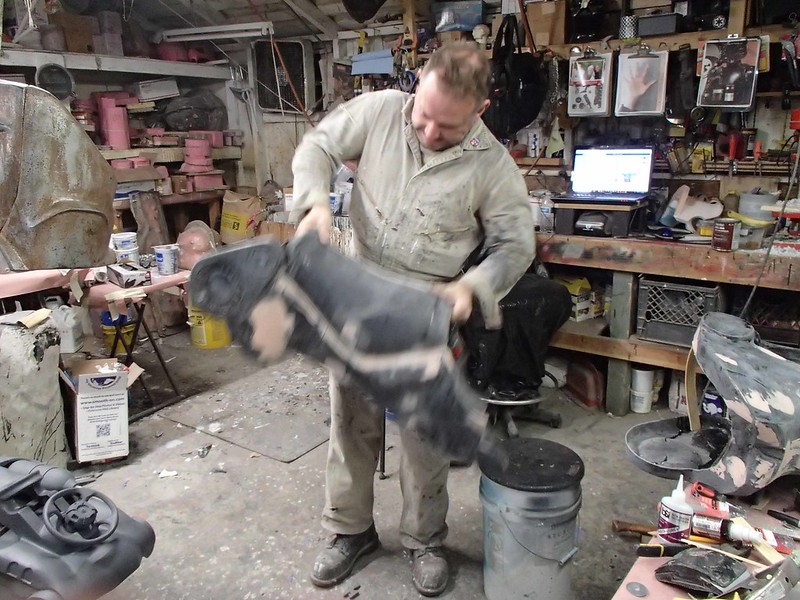 To keep the knee joint better aligned, I set the shins up to have a lot of wobble where they're mounted to the stilts. Then I installed a pair of hooks on either side of the knee so I could loop a piece of bungee cord from bolts on the back of the knee knobs onto the inside of the shin. For some reason I haven't taken any photos of this arrangement. I apologize.

I also decided to add a couple of latches to help hold the chest and back together more securely. So donning the top half of the costume starts with wiggling my way into the back via the shoulder straps: 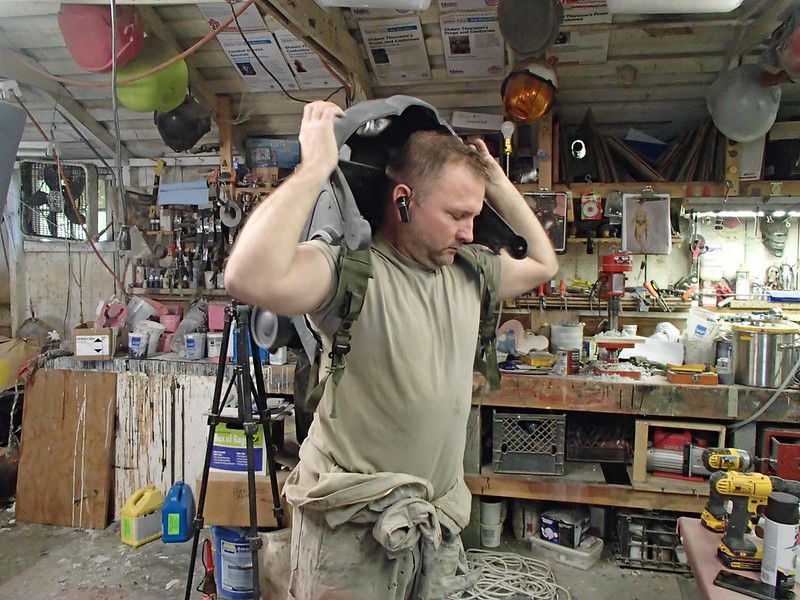 Then I use a bungee to tie the shoulder straps together: 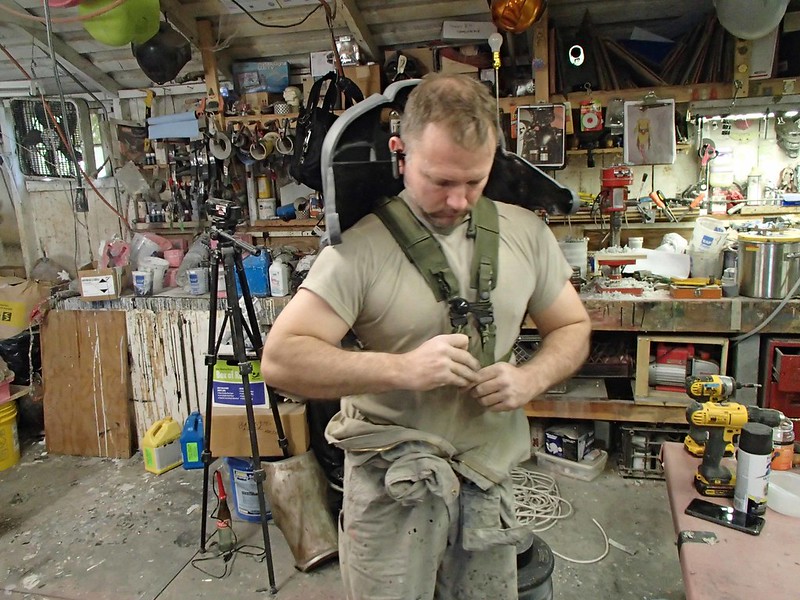 This lets me pull the shoulder straps nice and snug without cutting off circulation to my arms: 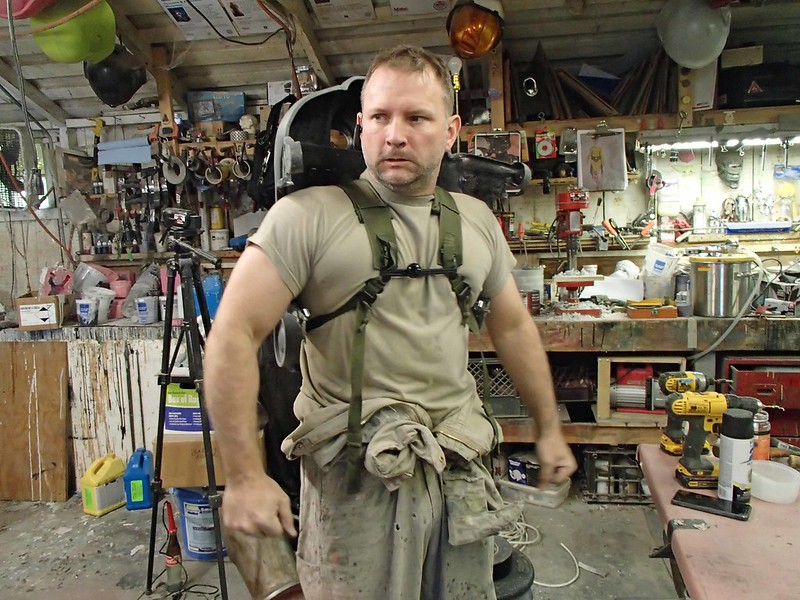 Then the chest slides onto the peg above the shoulder hole: 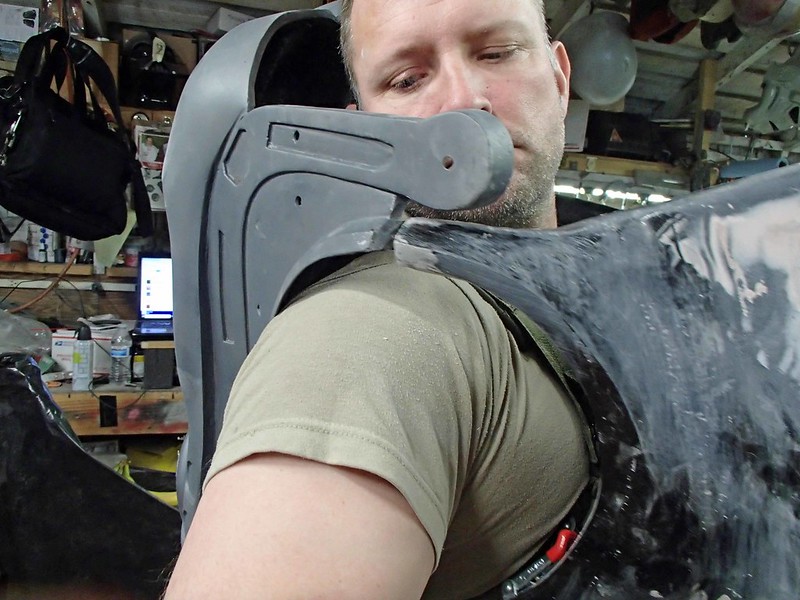 And the latches below the shoulder hole keep everything nice and snug in place: 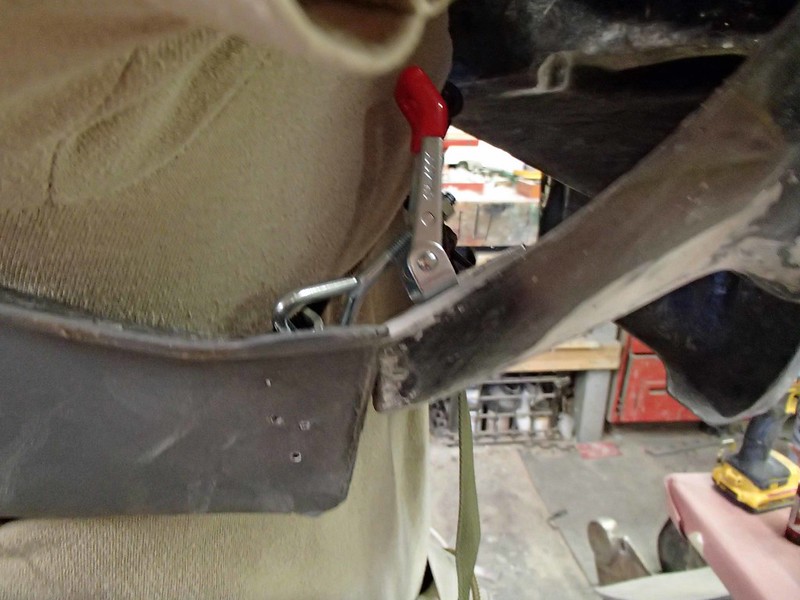 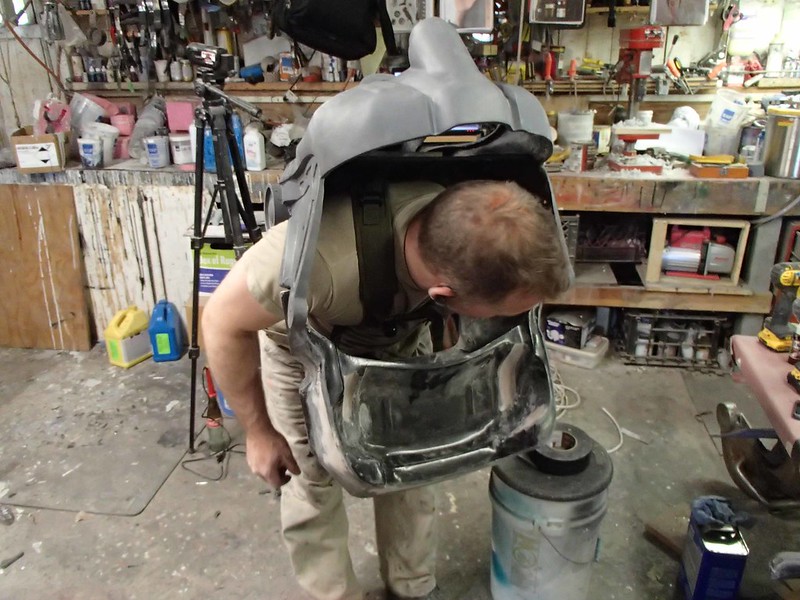 The other thing I really wasn't happy with was the rigging for the hands. Originally, I'd just set them up with handles so the wearer could move them around however they wanted. This had two main disadvantages. First, the handles weren't quite long enough and the hands were always tucked into the forearms too much. Second, this meant that the wearer had to carry the weight of the hands with their fingers. Sooner or later, fatigue would be a problem.

To solve this, I started by making the wooden innards of the hands longer. Then I put a handle off to the side so that it would work for a variety of different arm lengths: 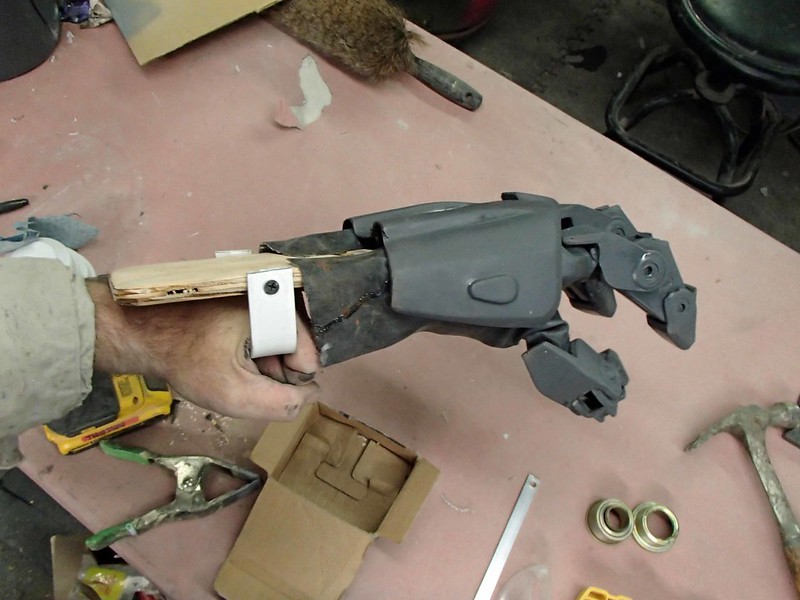 Then I drilled a big, sloppy hole where the wrist needed to be relative to the end of the forearm armor: 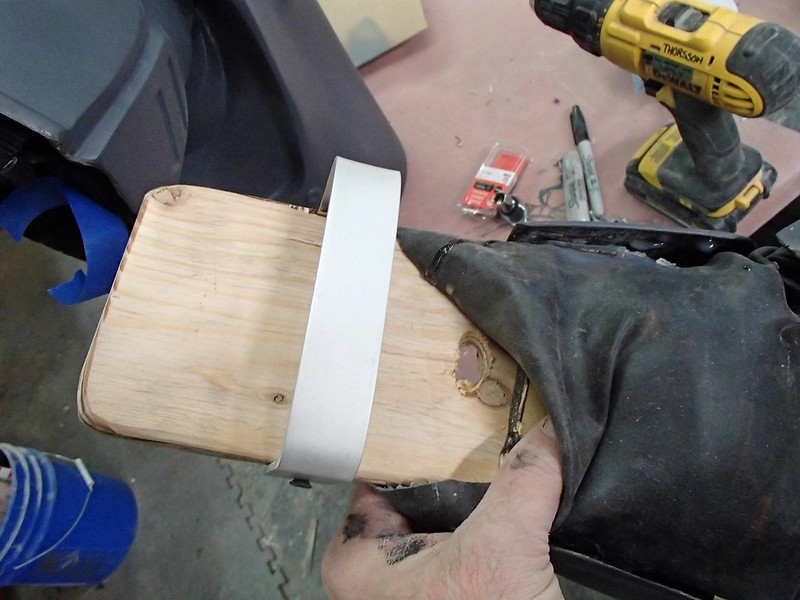 This was fitted to a piece of aluminum bar stock bolted into the wrist end of the forearm: 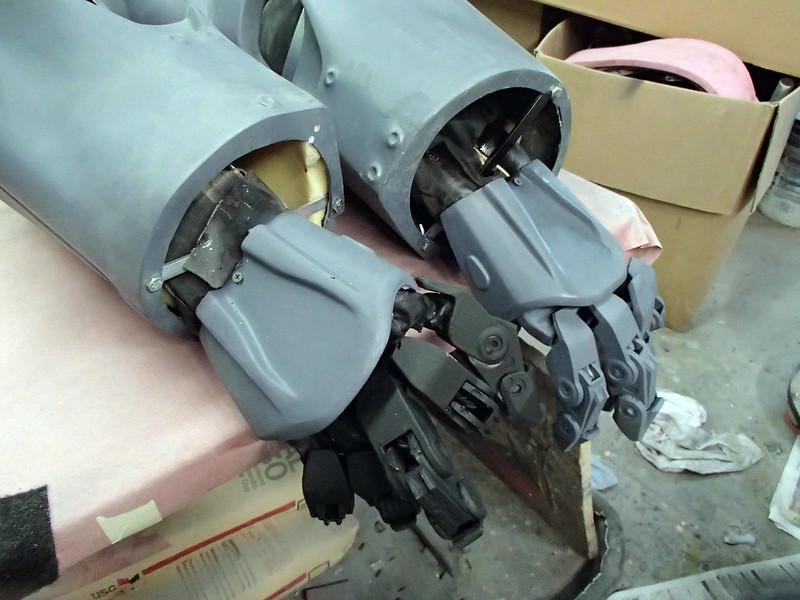 All of which was then wrapped in black fabric in order to pretty it up.

The end result is much better: 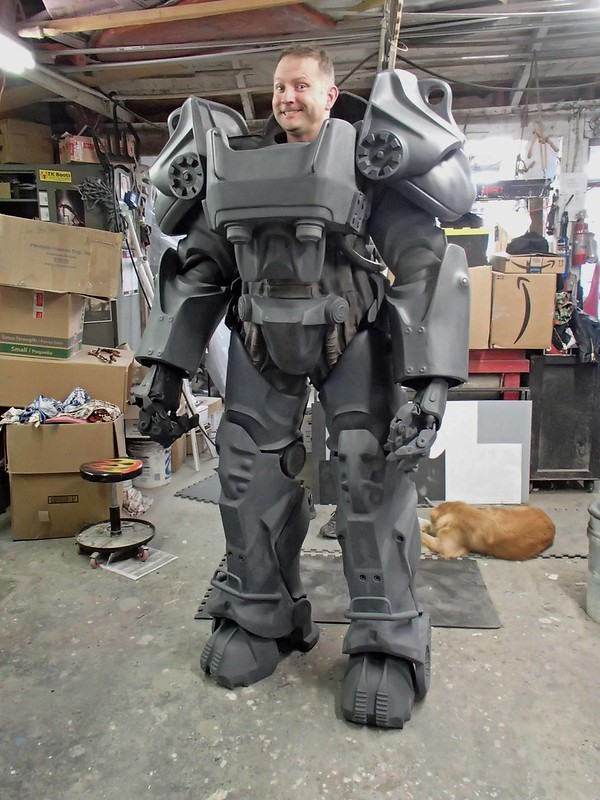 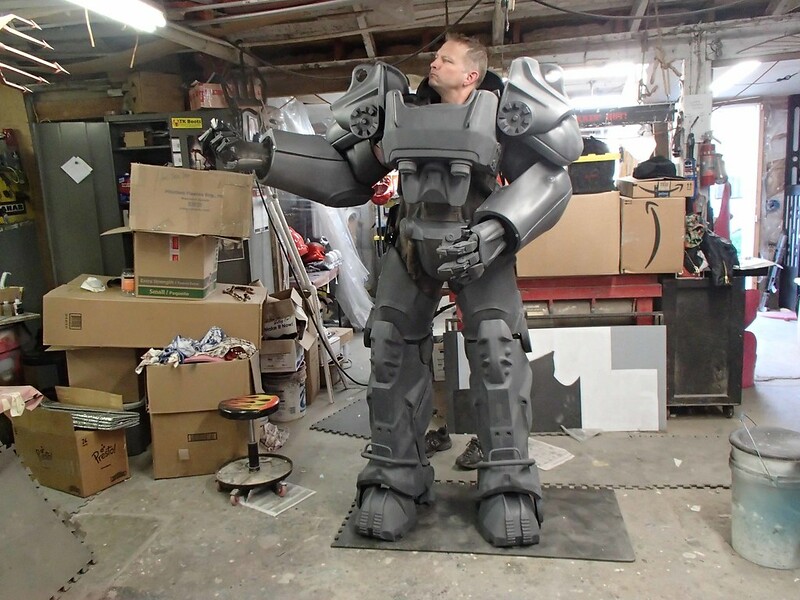 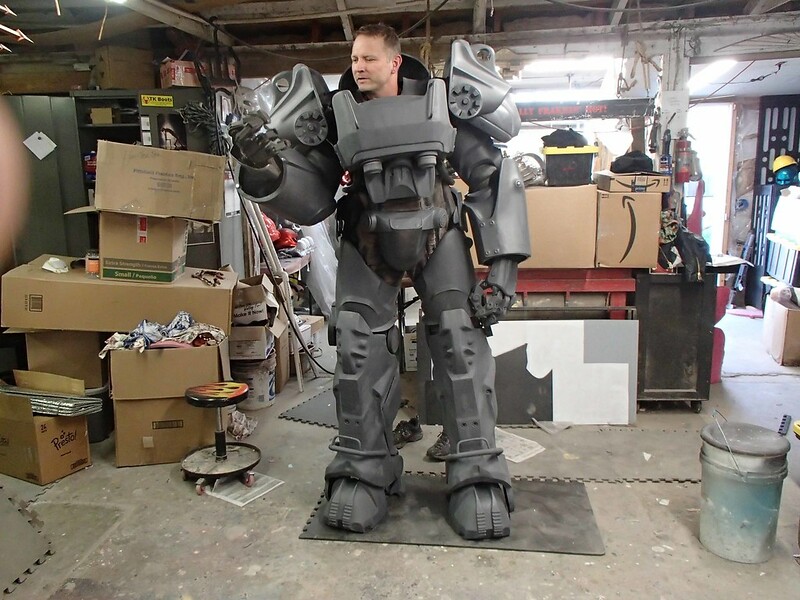 It's still big, heavy, and awkward to wear, but it sure looks good: 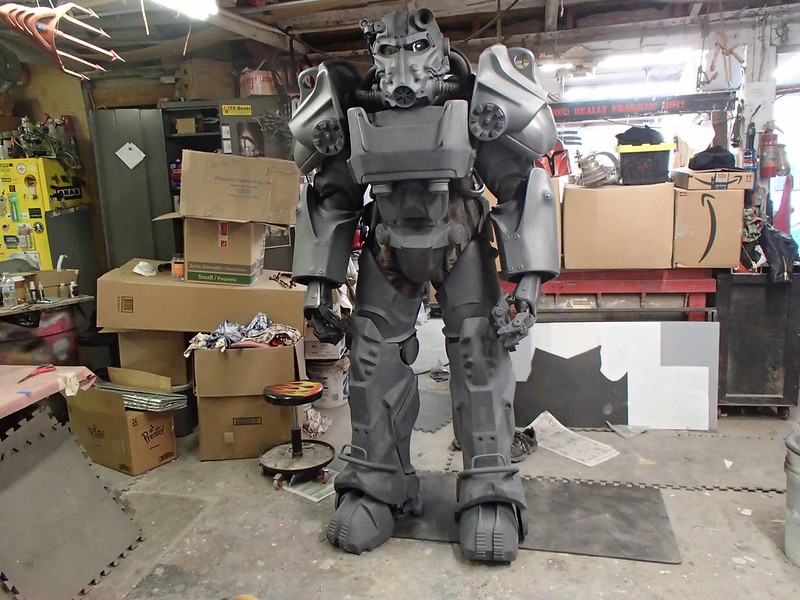 The big chest box also makes it impossible to see where I'm walking, so this is a suit that absolutely needs a handler to help get around: 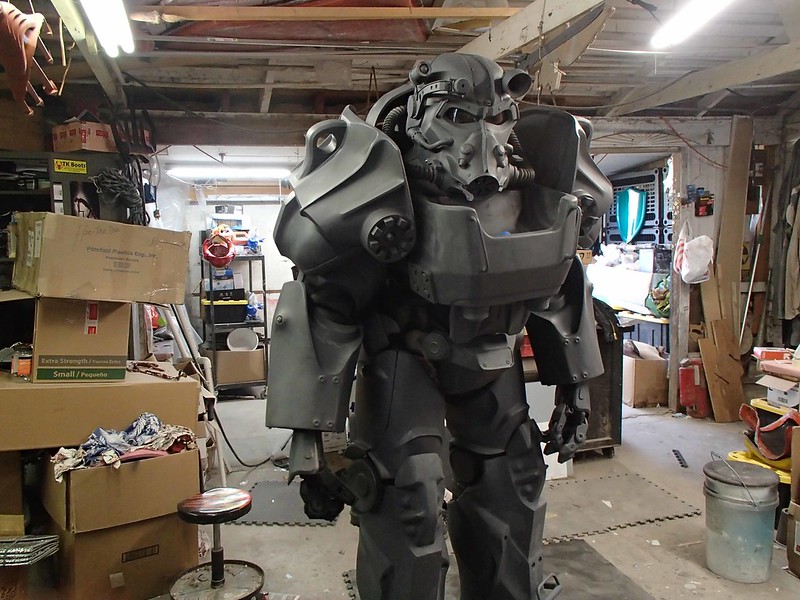 Someone else is going to paint this beauty though, so I crated it up and sent it off to him. Here's a shot of the crate: 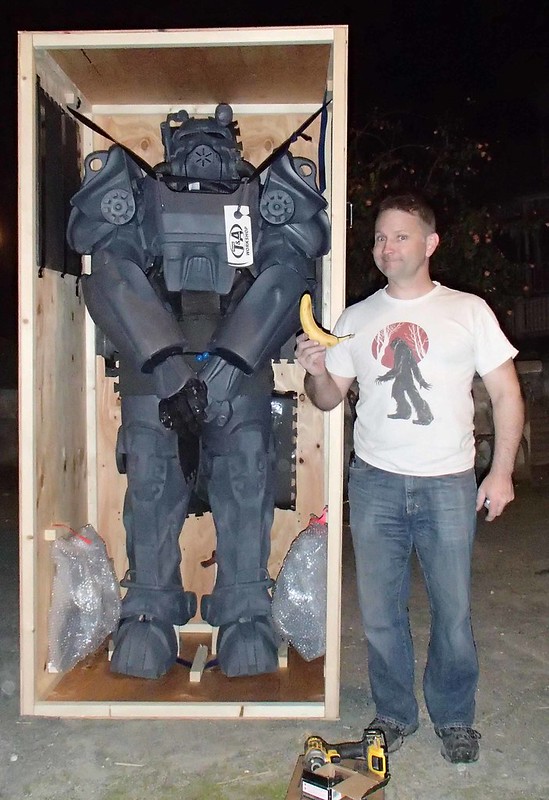 I'm away from my workshop for the moment, but I'm looking to make at least two more of these beasts when I get back.

This update was brilliant! Thanks for sharing your builds with us. Especially the challenge / clever solution portions. Brilliant.

RPF PREMIUM MEMBER
Amazing as always, but next time perhaps you should let the suit use the restroom before traveling, it looks like he will be holding it in for a few days.