Hey guys, I saw LastMinute's
TASM 2 Suit Progress which he' doing a TASM 1/2 Hybrid Mix so Maybe I should make a Pattern using pieces of both Films that I like and create A cool Hybrid pattern.

DISCLAIMER: I Used Spiderm Anneeyys' warped TASM 2 Pattern and un-warped it and therefore this project will be a personal project not meant for anyone else. Sorry guys.

Aspects of each suit I will use:

Awesome idea, and exactly the kind of thing that I was going for when coming up with the take for the suit I'm making

I agree with your main style ideas so far, especially the idea of using the specific honeycomb/hexagon patterning from TASM1 style, that is something that I really enjoyed and missed with the second suit.

Also agree on the shading. Perhaps not specifically muscle shading as TASM2 suit it certainly wasn't as pronounced, but the shading did help to contour the head and the body. 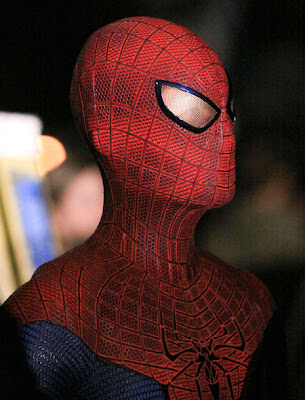 And if I may make a couple suggestions, I really enjoyed the leg stripe. It helped to elongate the body, as well as helping the costume look like modern athletic apparel, which what was Peter's motivation when designing it.

Stick with the Asics. It was athletic, unique, and helped achieve the idea that he made it himself using items he had on hand.

This is the Asics Hyper MD 4, but it is a similar design and type of shoe to the Dirt Dog 3.

And if you're looking for an in-between lens and frame, I used TJacks larger TASM1 option. Bigger than screen accurate, but not as big as TASM2 (I don't think). Those frames plus your idea for the lens colour/material might be what you're looking for. Good luck with this project! I'm really interested to see what you come up with!