I actually saw many of the Saturday morning TV episodes when they aired, in the Fall season of 1977. Jason of Star Command followed along in 1978 and '79, and the shows were in re-runs for a long time on Saturday morning TV, well into the 1980's. From a sci-fi modeler perspective, the spacecraft modeling was outstanding, given the low budget and time constraints. Lou Scheimer's book said that he could only afford to hire part the MCA-57 team, and made it plain in a video interview that he had minimal budget to work with. My best guess is that they (Jonathan Erland, Lorne Peterson, and Paul Huston(sp?) )used a fair number of leftover parts from their Star Wars model kit boxes. What I am doing is making screencaps from the DVD set, printing out sections at the scale I am building, and trying match near-equivalent small scale parts to that.

The actual filming effects miniature was 4 feet long (48 inches or 1.336m). The planetoid miniature that I am building here is 22 inches long, approximately half studio scale. That means scratch building virtually the whole thing; very few off-the-shelf items will be compatible without modifications. This meant using lots of ‘found’ parts to be kit-bashed and tweaked into shape.

Why that size? I deeply admire and respect the modelers who tackle the 4-foot and larger builds, but, my home just has no room for that… and moving to a larger house just to have space for the models is something that my awesome wife (huge sci-fi fan herself!) just says: “No”.

Some quickie math, since I am simply a happier modeler when I have an inkling of the scale I am working with. Based on screen captures of the televised program from DVD's and the hard work of the gentlemen E. James Small and Patrick King Hill, the width of a Seeker was determined to be 18 feet.

Using that to determine the maximum width of the hanger bay, I get a width of 126 feet. Using the best available side view of the Academy planetoid showing the length of the Academy and the hangers, I arrive at an approximate overall length of 20,800 feet. My build is 22 inches long, giving me a scale of 1/11093. Roughly, that is.

Have determined the length and size of my build, I got started by getting a new sheet XPS foam (Extruded Polystyrene foam). Its very light weight, easy to form and sculpt, and can be attached in layers with a variety of adhesives. The surface can be textured with sanding, and with a number of sculpting tools. I am a fan of working with foam; and while foam has it's own unique challenges, it is inexpensive and easy to work. I had determined the overall size and shape of the planetoid, and using a band saw, quickly cut out a top and bottom blank. I used a ceramic kitchen knife for rough shaping as it does not bind up (well, not as much) in the foam the way most other metal blades will - thanks to Robb Merrill for that tip!

*the show itself refers to the "planetoid" and almost never used the word asteroid.

(more as time and schedule allows)

Pics are from: the Oct 29 1977 TV Guide, a PR pic from Filmation via Pamelyn Ferdin's FB page, screencaps from the DVD set, and my creaky I-phone7.

I actually began this build a few years ago, and I've made a truckload of mistakes and start overs; this one will be the finished one. Really!

Here is a comparison shot of my second attempt with the TV Guide pic; I was hoping to force some of the mis-proportioned aspects of my build into shape, but, it turns out that it is *less* work to start over, being a bit more precise. Many of the sub-assemblies that I'd already gotten built were just fine, they just need a bit of adjustment to be done. Like, a better cut planetoid! Hence, this build:

I had a false memory that Space Academy had a ventral weapon…Where are the models today?

Oh, I hope you do both Dragonships!

Space Academy / Star Command had dorsal and ventral weapons(screencaps from my dvd copy):

publiusr said:
I had a false memory that Space Academy had a ventral weapon…Where are the models today?

Oh, I hope you do both Dragonships!
Click to expand...

Where are the models today? Landfill, most likely. Dude, you are *at least* my age, and we've both seen how the attitudes since the Seventies have changed when it comes to collectible filming items! The first season Dragonship was forced to self-destruct by Jason (SPOILER ALERT! ) but, it was nicely done with editing explosions over it. One of it's arms became the main BFG weapon on the second year Dragos ship (the Dragonstar, canonically) was theoretically at Lou Scheimer's home until he passed away in 2013.

It's hard to get good views of the Space Academy planetoid; the Seekers and the Starfires and Adron's ship and Queen Medusa's vessel... and the miscellaneous planetoid installations like the Space AgroLab and it's nearby Specular Mirror Array, the Energy Transmission asteroid, and of course Drago's ships... screencaps is about it.

Got some Stynylrez Grey Primer in, and did a quick test with the older planetoid top part; I am liking the way it looks!

I am not familiar with this show

At any rate, very cool project

Analyzer said:
I am not familiar with this show

At any rate, very cool project
Click to expand...

Ah, the days of the 3 main channels, PBS, and UHF for teevee... these ung'uns will never know what we put up with! Filmation got CBS to pick up the show and it ran Space Academy on Saturday mornings in the Fall of '77, and it was in re-runs for a long time. Jason of Star Command ran from 1978 thru '79, and was also re-run alot.
Last edited: Mar 30, 2022

A minor hurdle; there are two small towers on the dorsal surface, one near the bow, the other near the mid-point by the docking bays. It looks like the f/x model used the Airfix Sat. V, so these might be the LEM shroud, trimmed a bit. I have tried several small cone shapes, with some fails - but, I think I have gotten it right, finally:

And then, onwards with getting the top half to be a bit more planetoid-looking. I use a vintage Bridgeport USA / Holt Tool, Quad Fluted Screwdriver. An old, vintage 4-prong security bolt tool: exceptionally useful for roughing up foam into asteroid surface texture. To cut down on the mess and resulting cleanup of foam bits and fragments going everywhere, I keep a wetted paper towel nearby to wipe the foam with. Doing this periodically during the texturing process allows me to eliminate a lot of the static, which lets the residue drop neatly into a waiting trashcan.

I also liked the minis from METEOR

Joseph C. Brown said:
A minor hurdle; there are two small towers on the dorsal surface, one near the bow, the other near the mid-point by the docking bays. It looks like the f/x model used the Airfix Sat. V, so these might be the LEM shroud, trimmed a bit. I have tried several small cone shapes, with some fails - but, I think I have gotten it right, finally:
Click to expand... 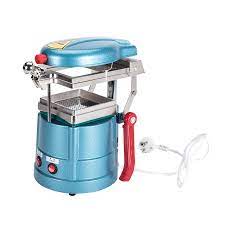 I see you have that vacuform machine (from Micro-Mark?)

I am curious what thickness sheet you use. The few times I have used it I got really thin pulls for a dome shape

You can also use acetone to distress your foam. Use Q-Tips or a long hair paint brush; it's faster and less messy...that's the good part.
Bad part: the acetone fumes + less control as to when the dissolving acetone will stop the processing of eating the foam (you'll have to experiment). For bigger parts/holes I use a solder iron (mask is "de rigueur" of course)

Analyzer said:
View attachment 1561094
I see you have that vacuform machine (from Micro-Mark?)

I am curious what thickness sheet you use. The few times I have used it I got really thin pulls for a dome shape
Click to expand...

I have had good performance with .030 styrene; I have had no luck being able to get good, bubble-free, and clear pulls with PETG or a variety of clear plastic. Too close to the heat source for a micro-second too long / or, not timing it -the droop- properly. But for the sheet styrene, it is great, with very few issues.

I know I could have gotten sheet styrene for less by buying more, but I don't have storage for the *big* sheets of styrene; so I used a reliable Amazon vendor: LITKO Plasticard .030 Inch 8-Pack for about $12.95. The dental vacuum former (mine is identical to the pic you posted) works fairly well for my purposes, but I will, on occasion, still drag out my creaky Mattel Vac-U-Form and do some small piece work. A vendor in NC (LoTekEngineering ?) sells sheets of plastic pre-cut for the Mattel Vac-U-Form, along with a re-conditioning kit which rejuvenated my battered machine!

joberg said:
You can also use acetone to distress your foam. Use Q-Tips or a long hair paint brush; it's faster and less messy...that's the good part.
Bad part: the acetone fumes + less control as to when the dissolving acetone will stop the processing of eating the foam (you'll have to experiment). For bigger parts/holes I use a solder iron (mask is "de rigueur" of course)
Click to expand...

Yep, been there, built that, and got the ugly gooey blobs of miscalculation to prove it! I've been working with foam since the mid-90's, my biggish Whitestar was the blue insulation foam (it's got a B-3 from Broken Arrow from foam to it's left), my Technomage ship also was blue foam, the Brakiri cruiser was in the pink foam:

joberg said:
...the dissolving acetone will stop the processing of eating the foam (you'll have to experiment).
Click to expand...

Good points, but... as of this posting, Wonderfest USA is 64 days away (the website says 65, but I head out that Friday AM for the show, so, 64). So, "experimenting" is kinda off the plate as an option at this point! I'll be pushing fairly hard to have this build completed, plus one or two minor side builds to get entered into the show. My astounding time-management skillz: 404!

<edit> what I meant to say was after doing two prior iterations of the planetoid which were failures (shape, size, width, my klutziness) I learned, for me, the best techniques for doing the foam texturing fairly quickly. Namely, it was a quick 45-minute session to texture the top half; slower than acetone, yes, but lots more controllable!

Minor updates, the real world has kept me a bit busy... the TFA* clear domes that Nico (aka frostrubin ) made for me are finally getting their vacuformed bases. You only get to see the partial successes, the failures are spectacular in a ugly way.

The pics with the Shapeways Andromeda are to demonstrate the scale. By my (potentially suspect) math, the domes are 516m across, and the Andromeda is 1301m in length. The Space Academy planetoid was enormous!


*Totally Freakin' Awesome - also translates into a lot of extra work on my part to insure that the rest of the build matches the excellence of Nico's efforts on my behalf.

I don't remember any nozzles or nacelles. All spindizzy I suppose.

Spindizzies for the drive is my vote.