The other Maltese Falcon threads are a wealth of information, but the last posts were so long ago I figured I'd better start a new one. I'd wanted a Maltese Falcon for a long, long time. Back in 2014 I bought an Oz resin one with the half-baked plan to make a mold from it to make a lead version. Not for any production or sale, but to own a lead one. I ignored the fact that the closest to casting anything in a mold I'd ever done was make a batch of blueberry muffins. I read about metal casting and molding. I even pondered what layers of metal I'd have to use to gold plate the lead bird, prior to painting it over with black enamel. Between life getting in the way, a layoff from work, and moving a couple of times I never got around to it.
When looking for something else on Craiglist yesterday I find a posting: VINTAGE 50 lb Maltese falcon, statue, bird. What?? I got in contact with the guy and ended up buying it today.
It's not the most beautiful version. It looks like a copy of another one that's out there, but not sure which one it's called. There's one on eBay right now that looks pretty darn close. Curiously the plinth seems to be about 25-30% too short, as if the bottom is missing. All the years I'd looked I hadn't heard of anyone making a lead one. This morning I did find this post from 2019 where an unfinished lead version was shown: Haunted Studios Maltese Falcon.

I asked about it from the guy who sold it to me, but all he knew is he got it at an estate sale years ago. He's been using it as a door stop for years. My fingernail test of the bottom and a couple of scraped spots tell me it's solid lead. At 50 lbs it has to be. Unless it's filled with some exotic metal, only lead could come up with ~50 lbs for its size. The chipped areas suggest it was painted with a red primer before the black gloss paint was applied. The bottom is unpainted and unfinished.

The too-short plinth is curious. If I was to make a wild guess the person who made it was filling the mold and just was a little short of lead. That makes more sense to me than someone cutting the bottom off.

I'll be taking some more photos and measurements soon. Not completely sure what I'll do with it, but I'm tempted to strip it and refinish it. Don't know if I'll go crazy enough to try to gold plate it first. I wish it was as good a version as Oz's it, but it was local, reasonably priced, and well, made from lead.

Photos here are from the CL post. It's sitting on a little wooden stand. I've added another one of its bottom. Photos with measurements to come in a subsequent post. 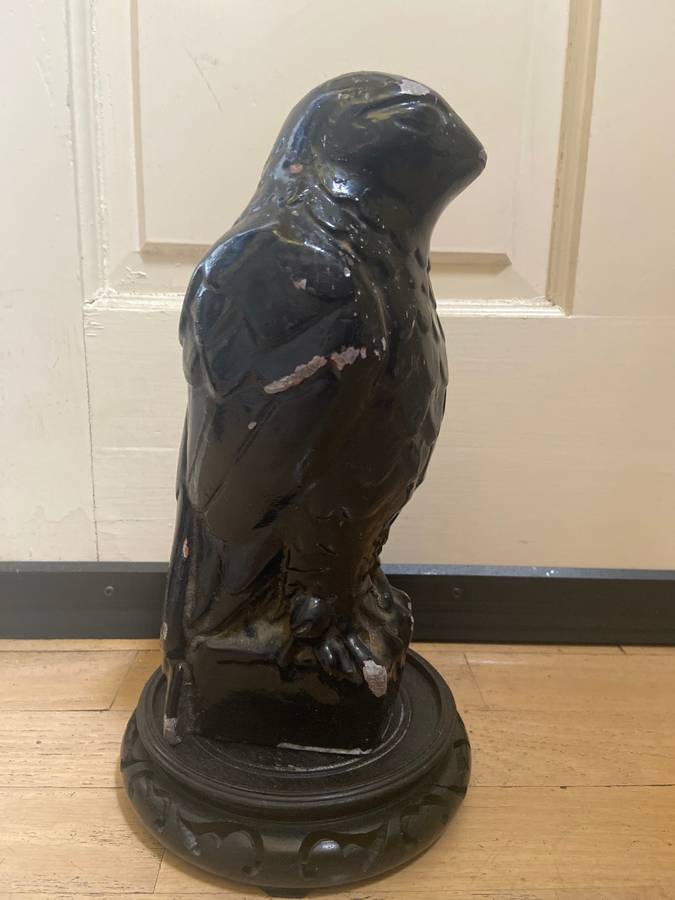 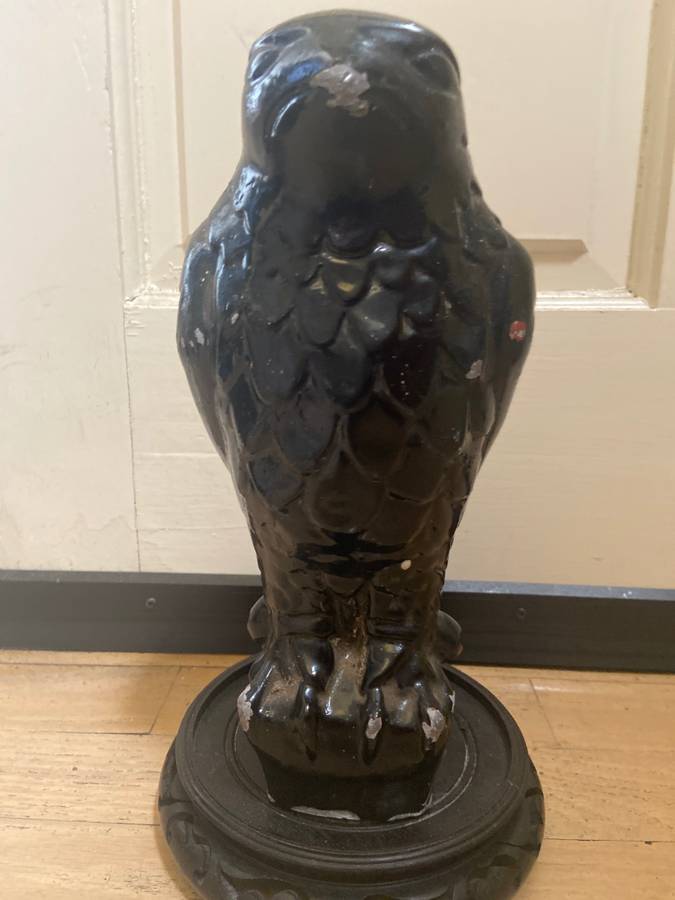 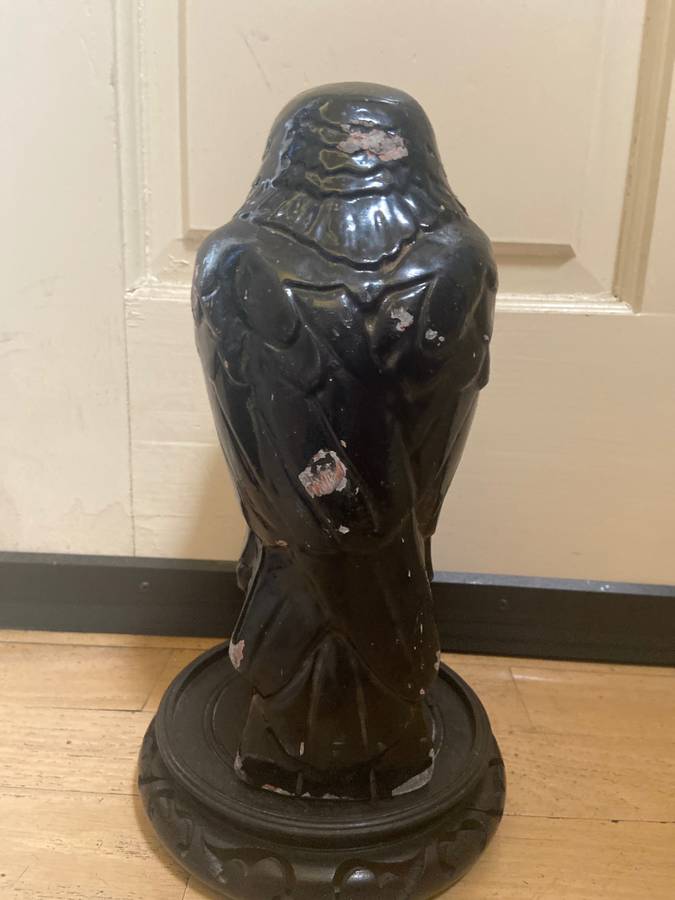 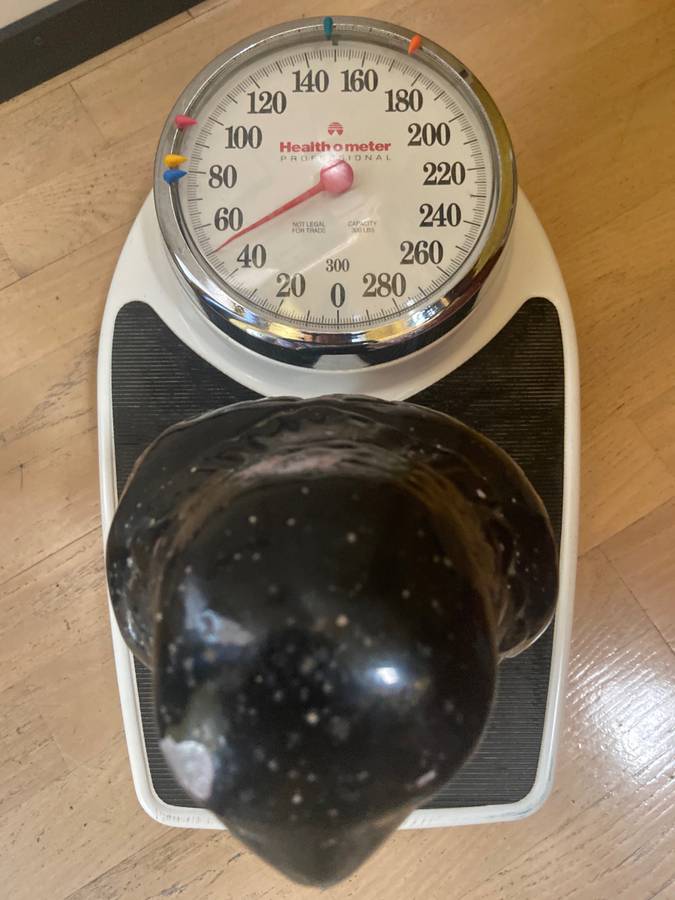 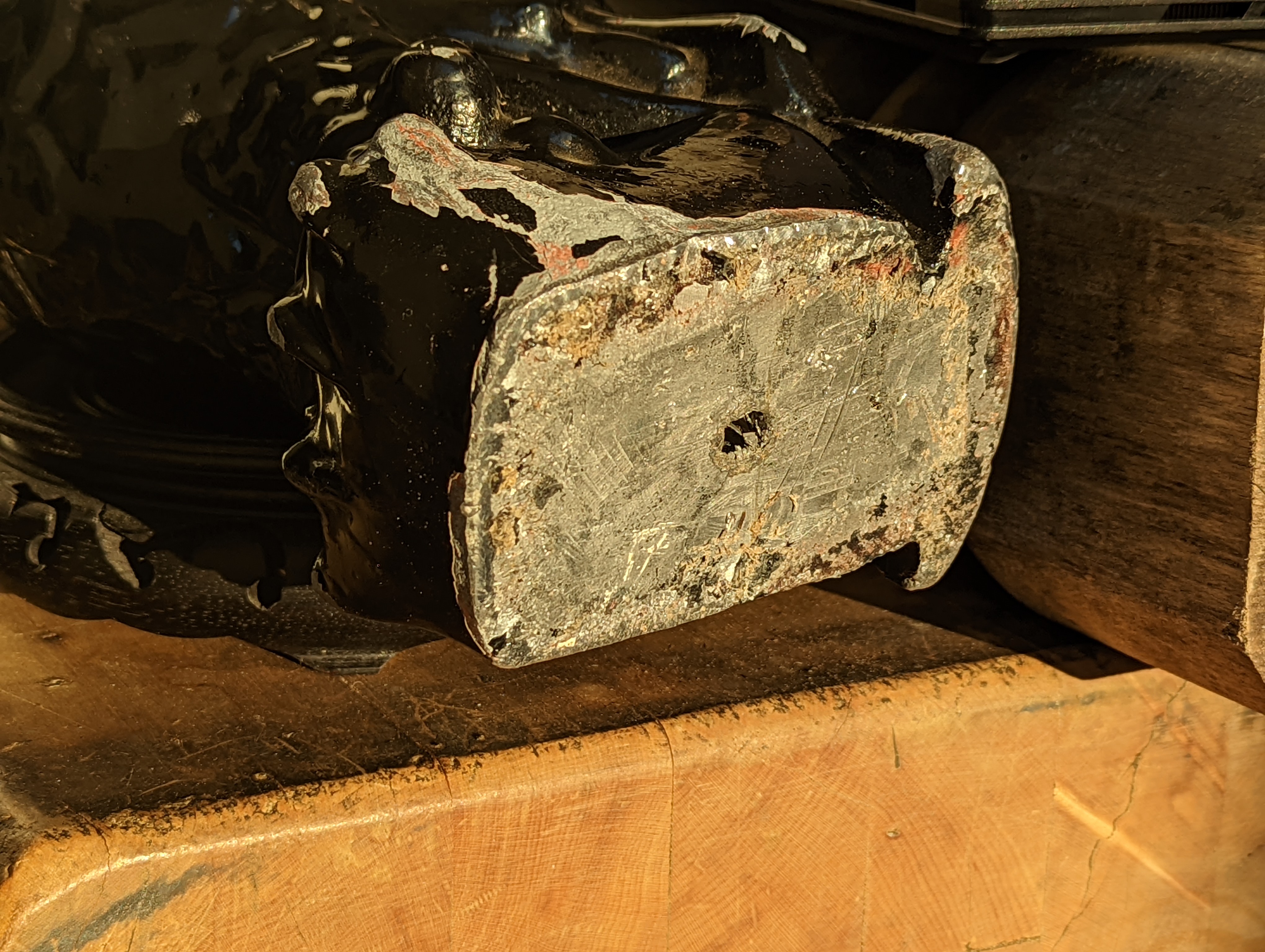 This one on eBay now looks awfully similar. The back "collar" of feathers are both slightly asymmetrical. 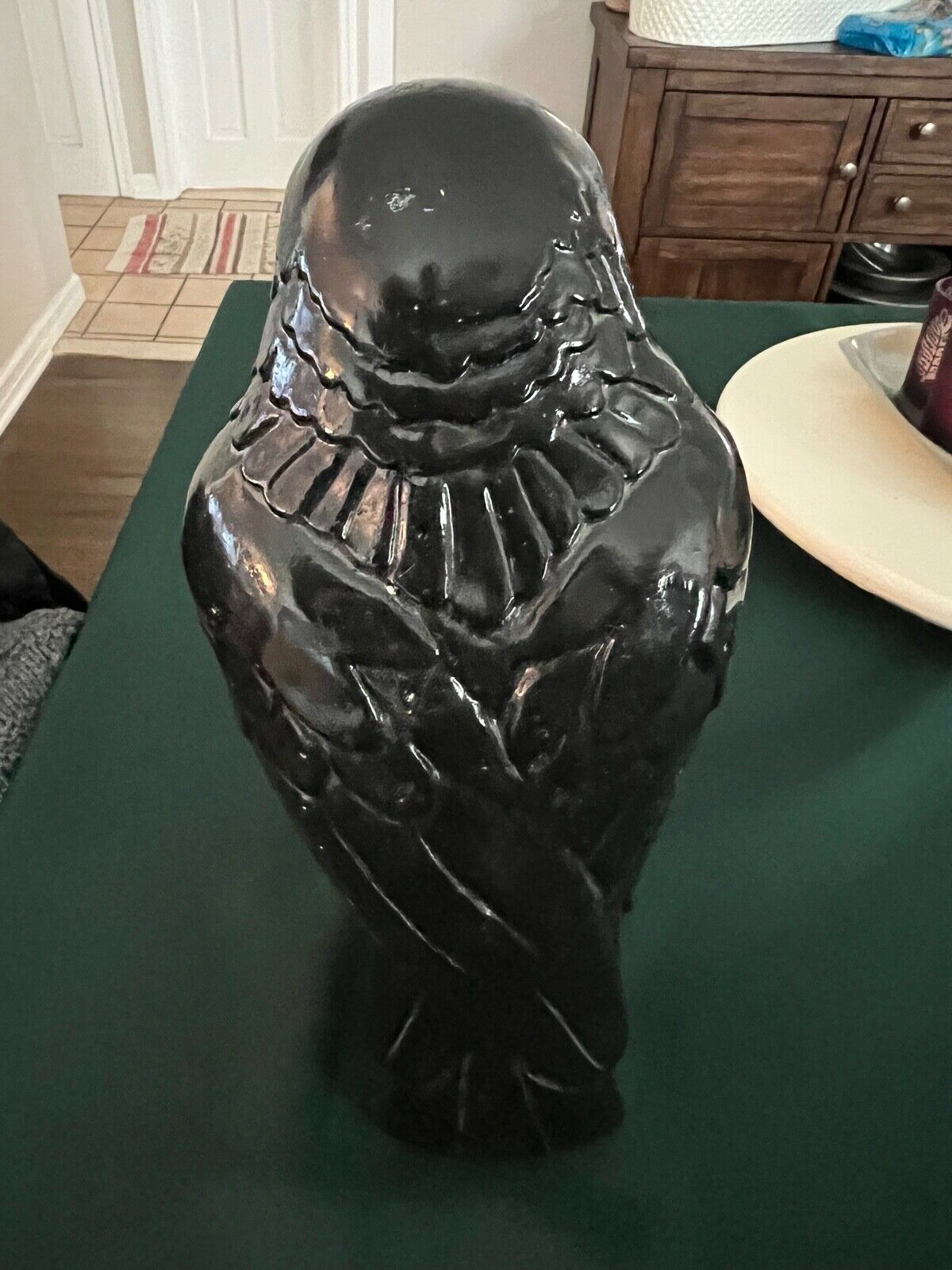 The tail feathers are also similar, but truncated on the lead one. 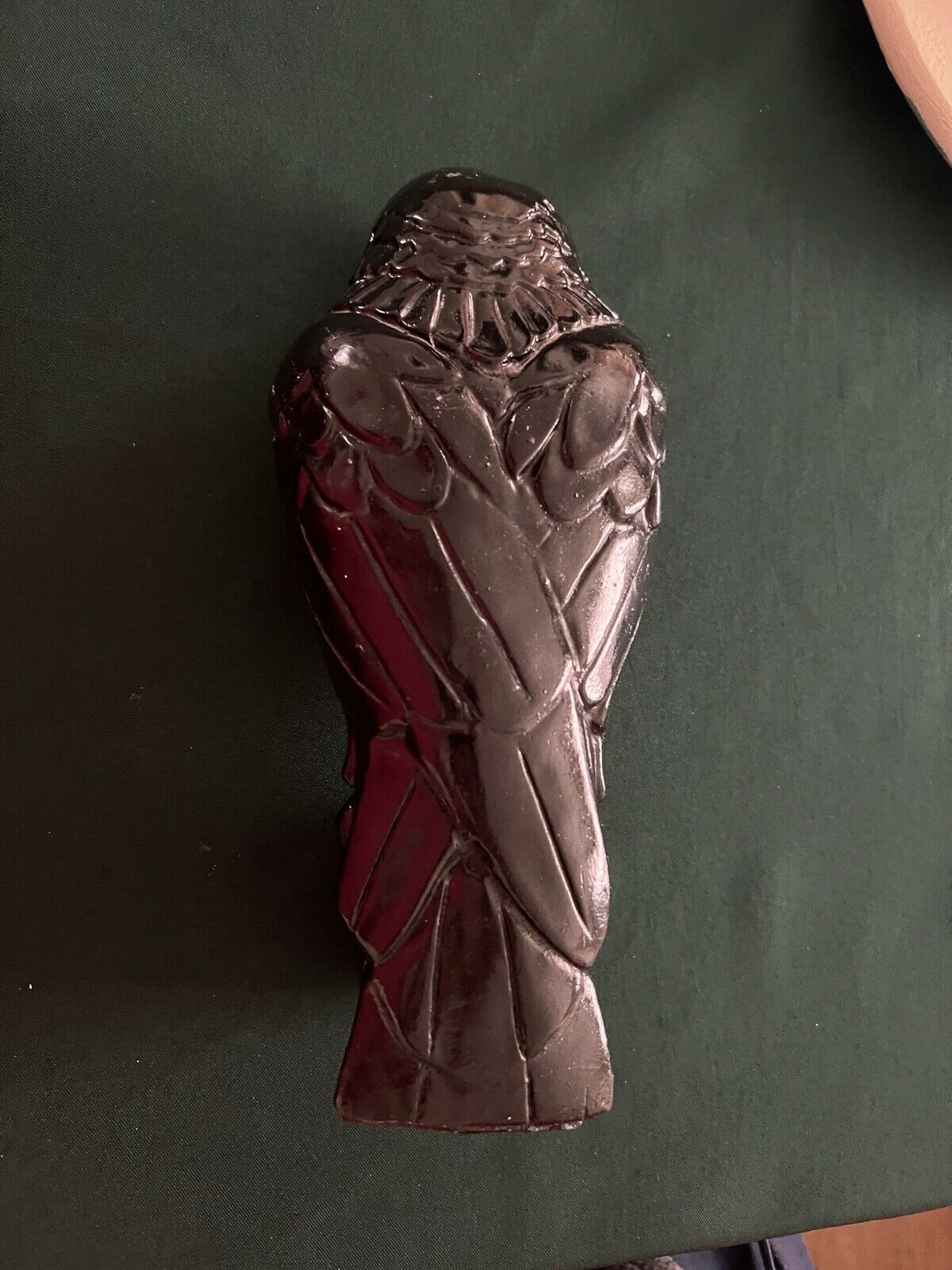