Bought this around Christmas last year when the Mynock's Den offered a couple of these excellent Sith Acolyte Mask kits for sale, ready to ship. Once i had it in hand and could examine his work up close and personal i was very impressed. Excellent work on The Mynock's Den's part. 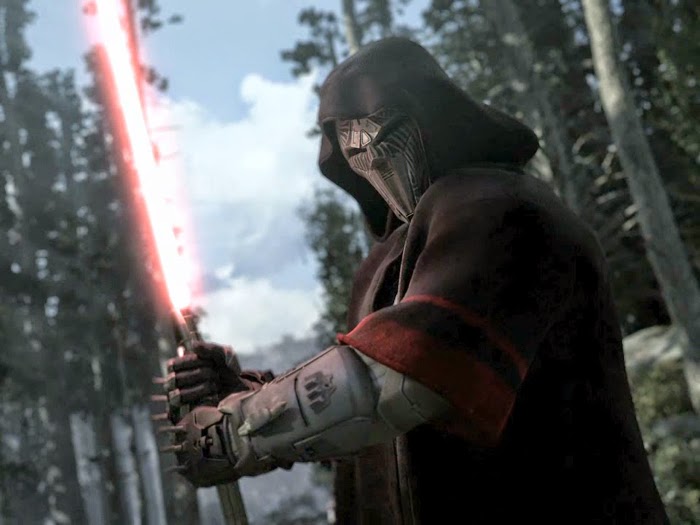 
Started with dremmeling those 3 slots beneath the nose area with a 1,5mm drill and filed these out after that. No scarring in this phase just yet, i added that later with some other dremmel bits. 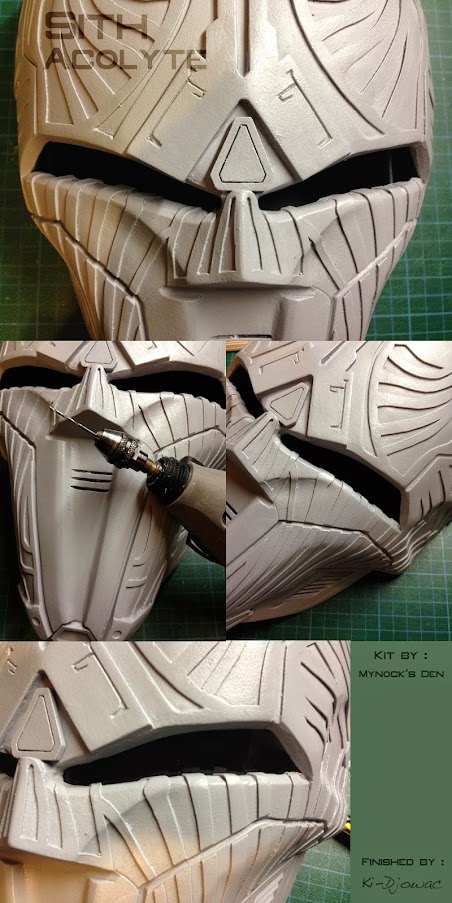 Here's where the eyes were Dremmeled flat on the inside. The kit itself came with 2 pieces of black see through cloth. I decided against that and cut up a T-visor i had lying around from another project. I needed some kind of flat edge around the eye areas to make that idea work. 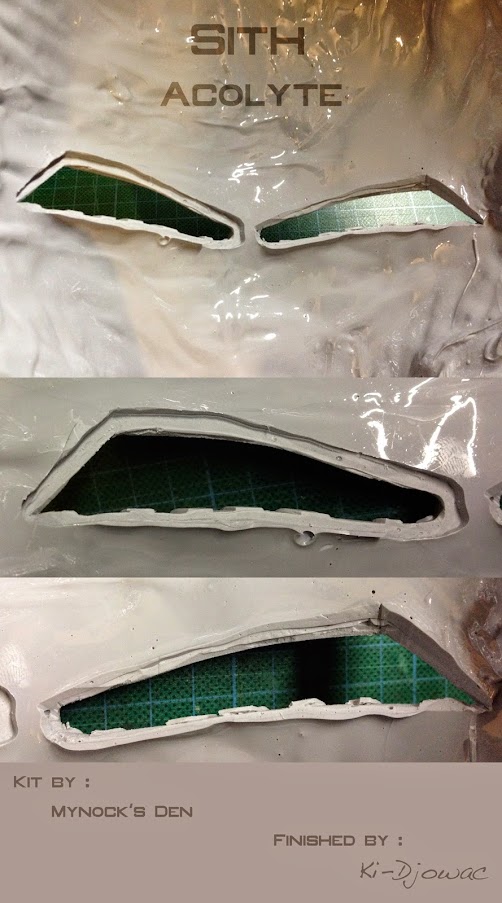 Made a paper template once i knew where the T-visor lenses would be placed and grinded them down into shape with a grinding mill and sandpaper. To get these into the shape to fit into the eye slots, i used one of those paintburners to make them a bit more flexible. Once hot enough, pushed them into place and they stayed into the shape of the mask once they cooled down again. Needless to say if you ever attempt this yourself : BE CAREFUL 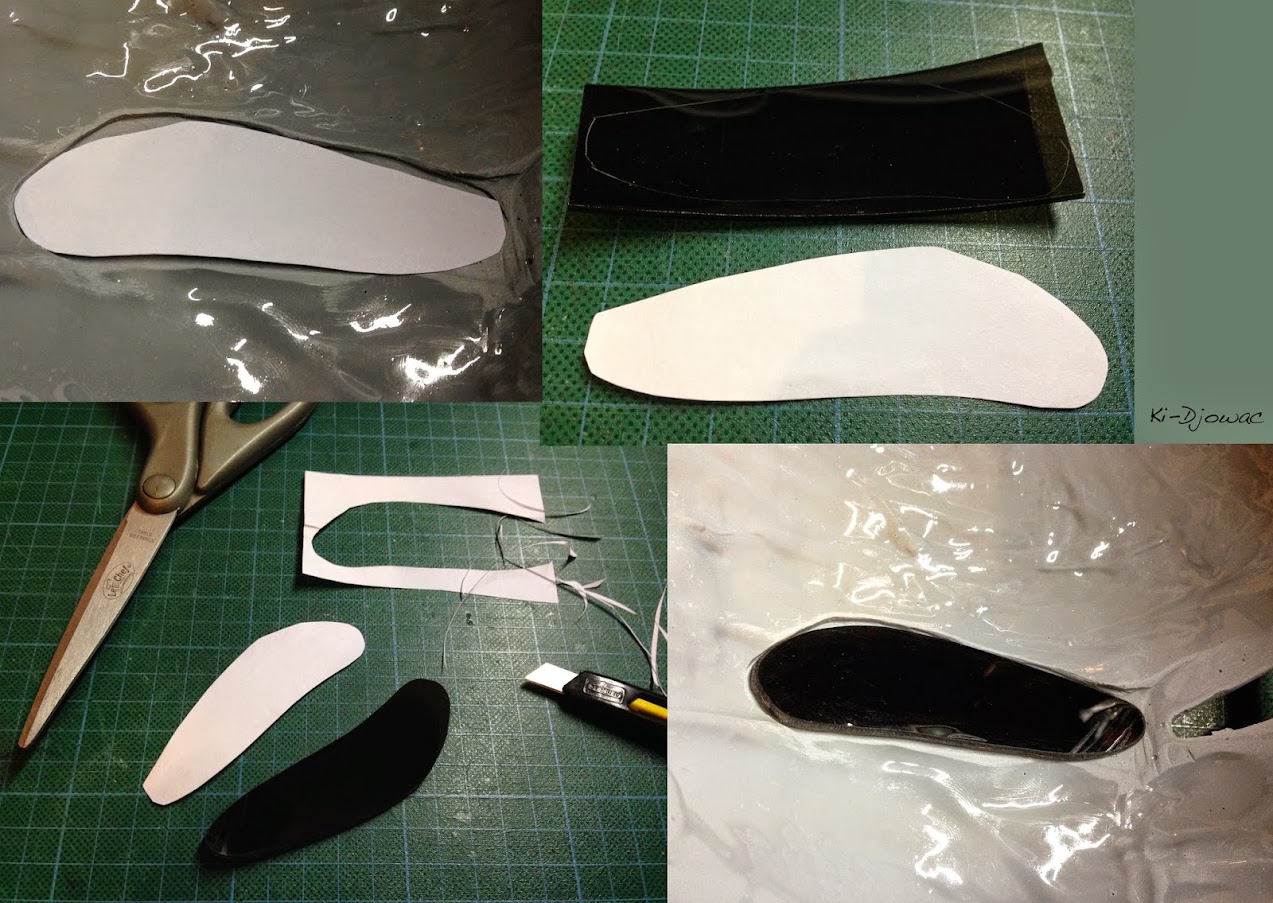 Dremmeled the scars and then it's off to paint. Used some Motip spraycans. First was a layer of primer, second a layer of Matt black (which was unused in the rest of this build) and a layer of steelwheel on top of that. 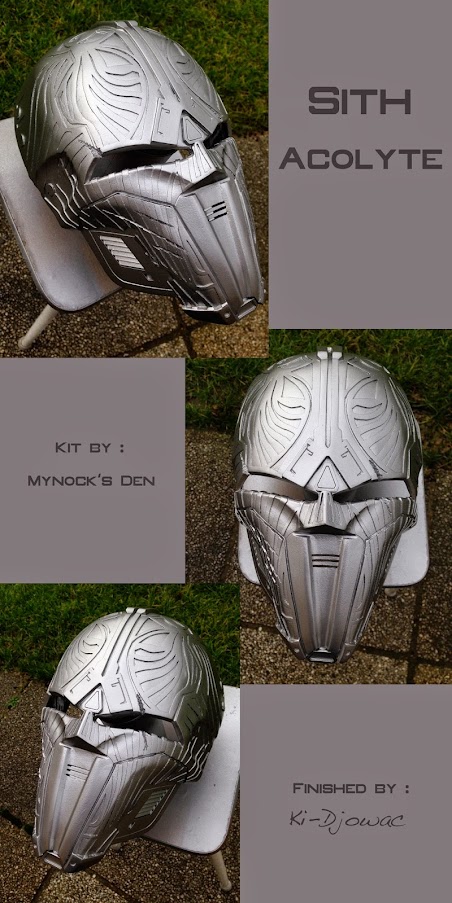 After that i was kinda 'winging it' as i went along. The detailing was done with a brush and some Motip spraypaint. Very clear lines all over the mask, can't go wrong anywhere.The darkened areas were done with the matt black again, but very thin so the layer of steelwheel underneath would still see through a bit. Once i started weathering, this proved to light for my taste. Back to the shop to get another idea : a spraycan of Dark Anthracite. That on top of the black and then the same matt black again on top of that to give it the more weathered all over look in the grooved detailing. Used some matt black and a bunch of cotton balls to weather the steelwheel layer. The area down the middle of the mask above the nose to the back along with the screws were overlayed with silver as these appeared lighter on screen too. Weathered after that with the same matt black. 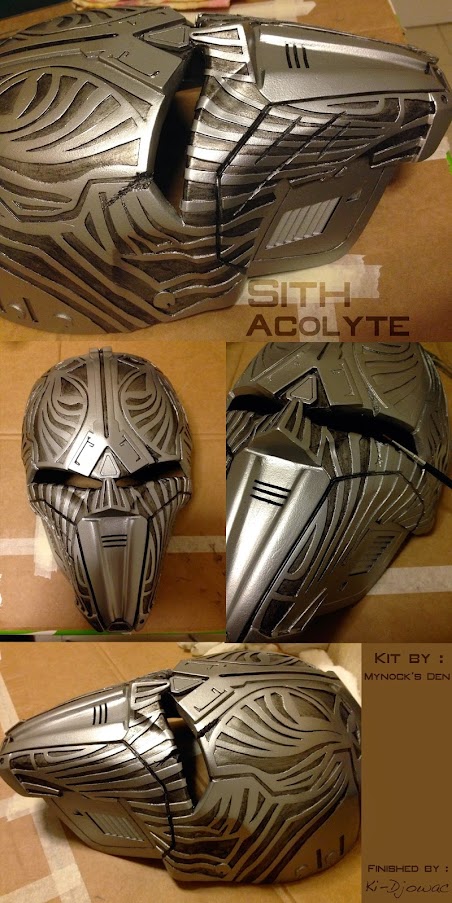 Padding came with the kit also and i used it so the mask became fully functional for trooping. The flexible band that came with kit was also sewed with some velcro. Had to call some external sewing help on this one
The velcro is epoxied into place with Bison Combi Turbo. The padding on the chin is added by me. Everything easily removable and adjustable if needed. 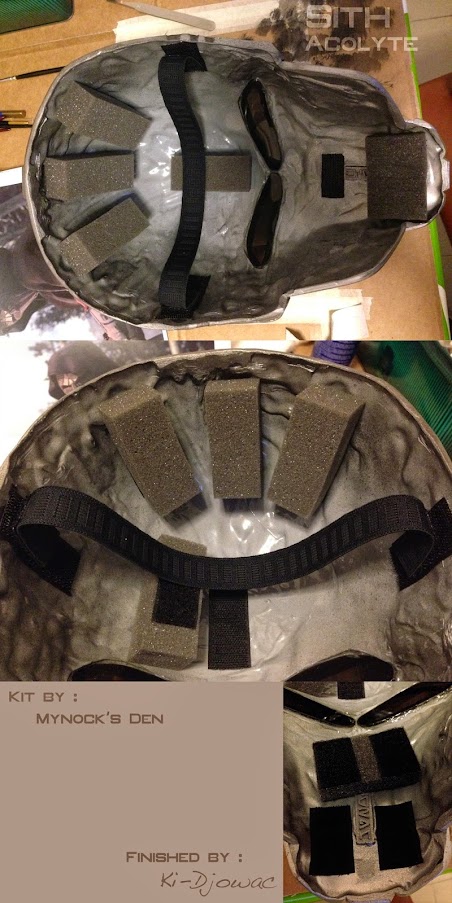 On to the final glam shots


The paintwork of the scarring was a bit of trial and error. A bit of brassy-looking paint in there as well as some black, dark anthracite and some steelwheel. 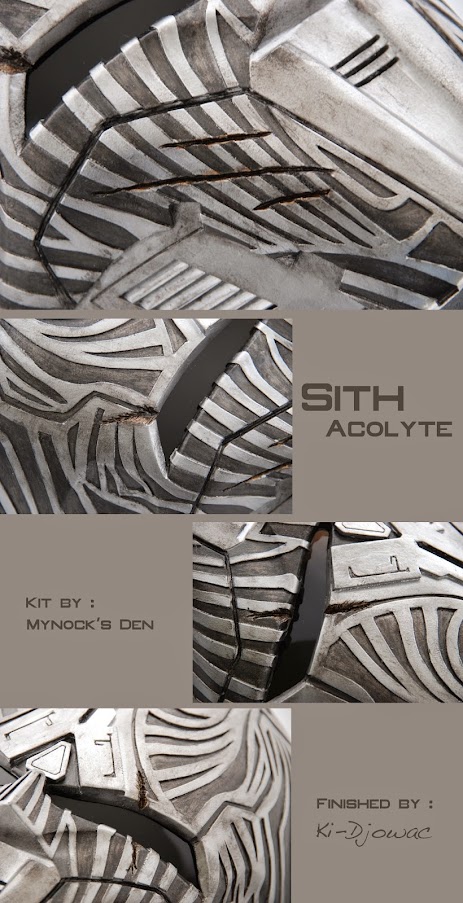 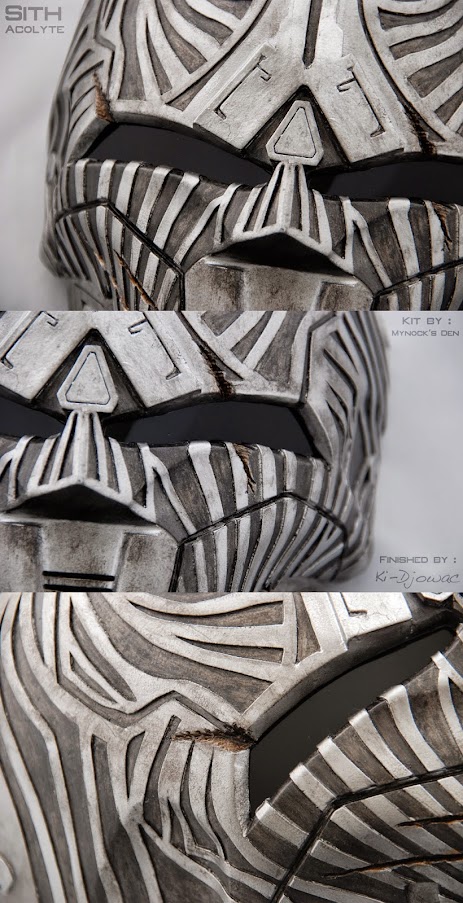 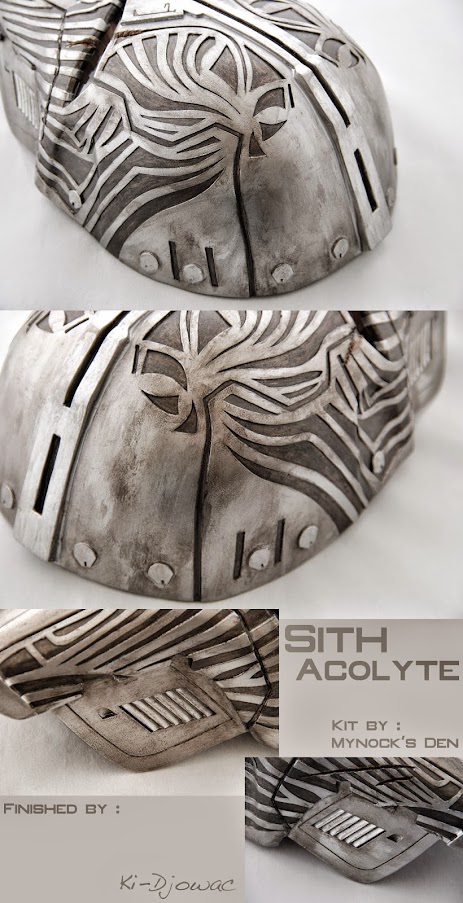 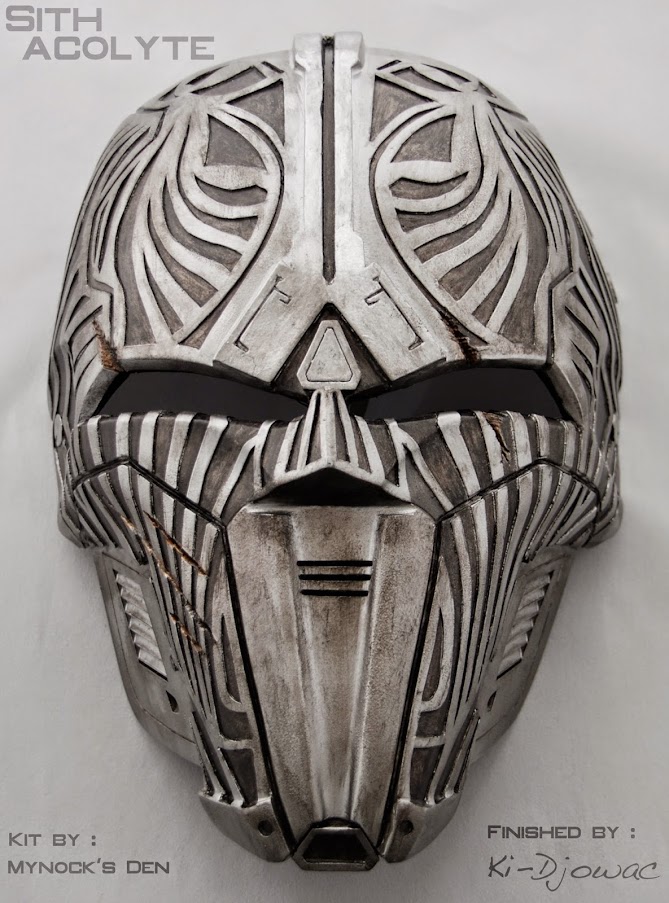 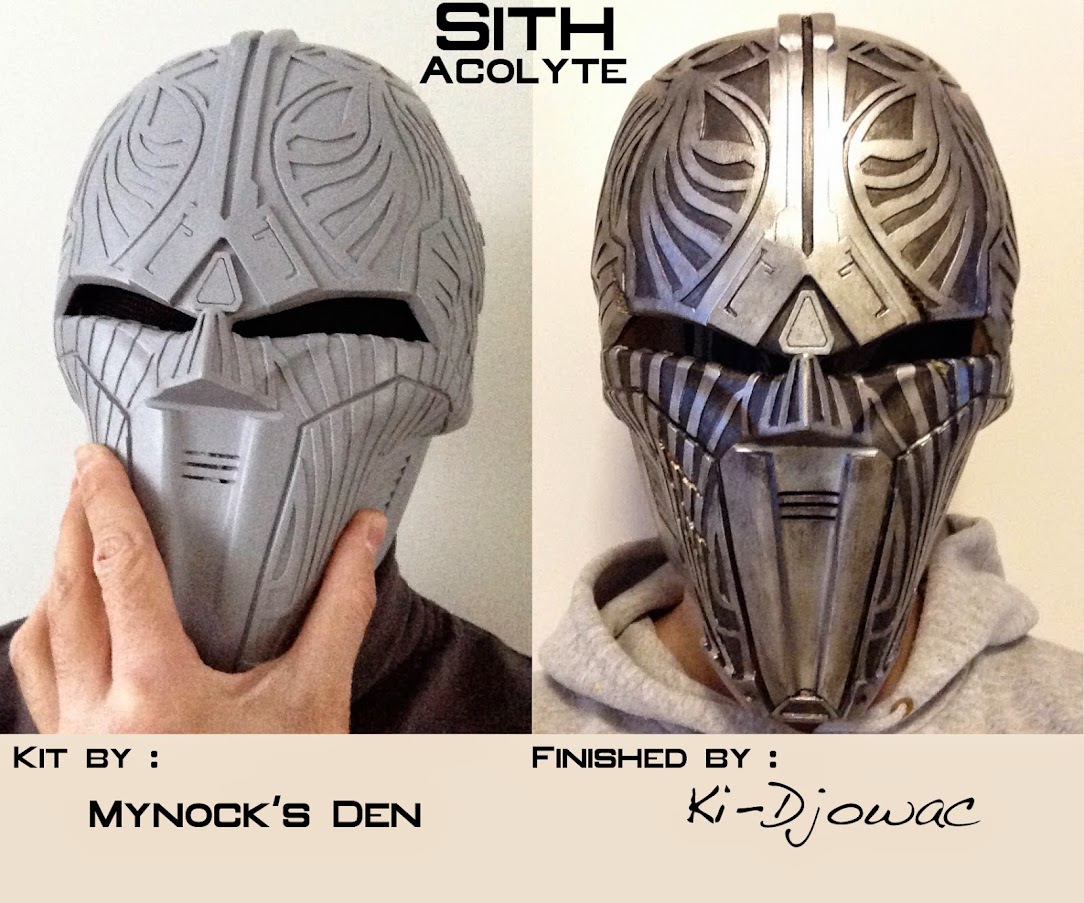 A bit of Photoshop fun : 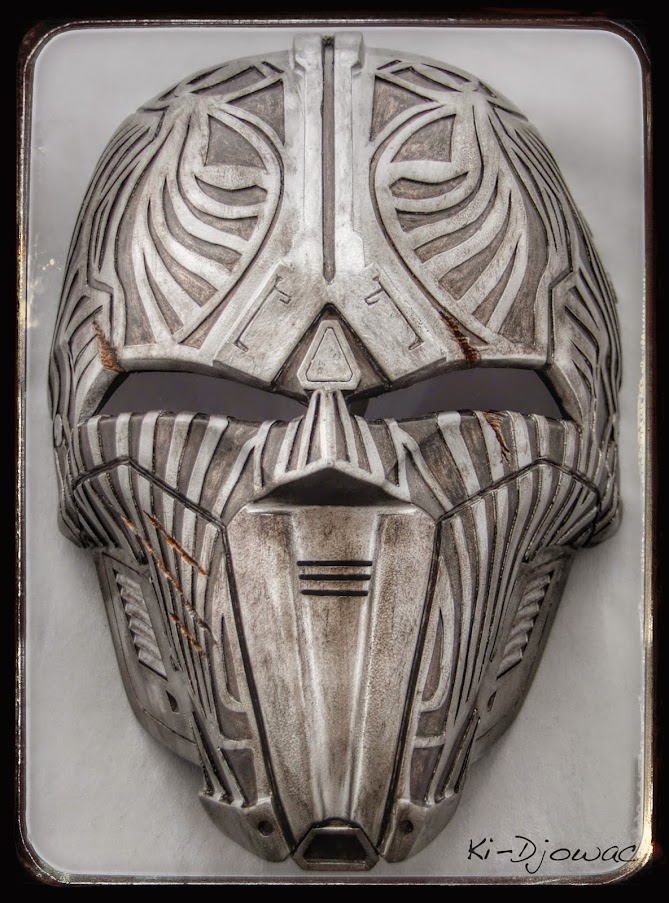 There you have it. Thoughts, comments ? Feel free to share
S

One of the best paint jobs I've seen on my kits. Love the weathering and the battle scars.☺ A+!

RPF PREMIUM MEMBER
Thanks for the positive comments ! Glad you like it