Analyzer said:
I think the MPC shuttle is best displayed in landed position looking at it from the front on since it is based on the full size set which has much different angles than the filming model

It looks a bit odd in flight when viewing from the side
Click to expand...

Who would have room to display it in flight mode?!

Analyzer said:
Round 2 have apparently also confirmed a re-pop of the classic 1/100 AT-AT with "improved parts"
Click to expand...

Analyzer said:
Round 2 have apparently also confirmed a re-pop of the classic 1/100 AT-AT with "improved parts"
Click to expand...

Foot pads that compress together like they're supposed to instead of molded together?

Those rubber bands were great for the "play" factor as a kid, but they did certainly do not stand the test of time. I wonder if anyone still has rubber bands that have not disintegrated and still has the head intact

edge10 said:
Who would have room to display it in flight mode?!
Click to expand...

On top of a bookcase, it doesn't take up *that* much room 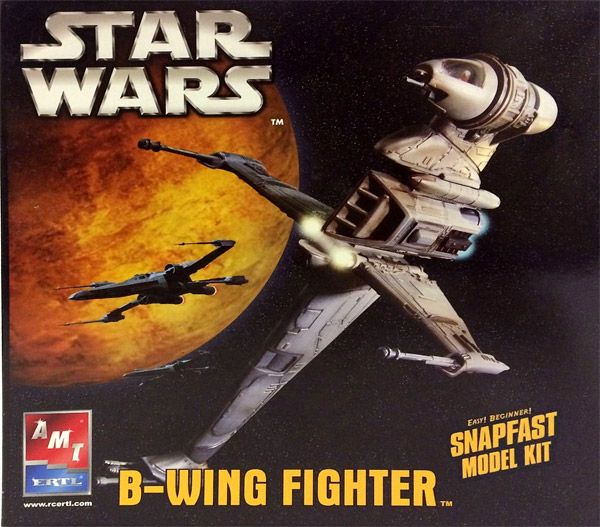 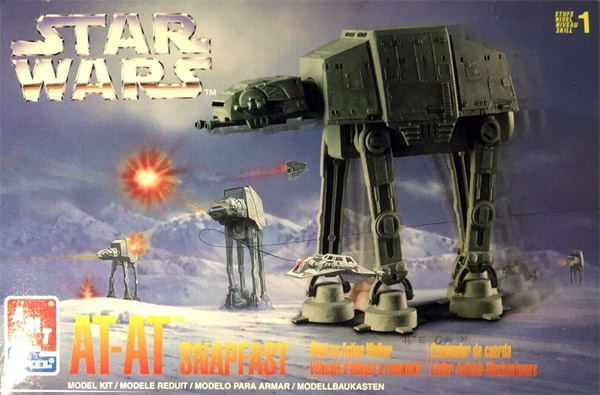 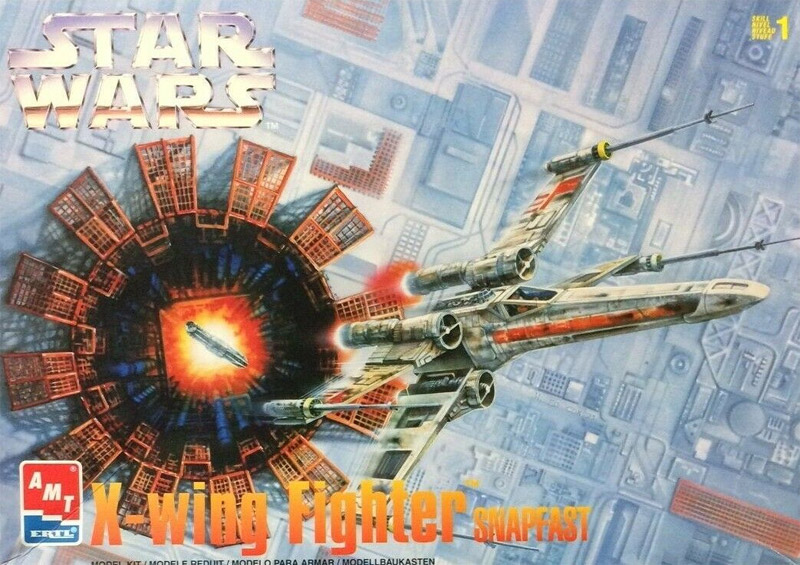 If the scale of 1/100 is correct, then that is definitely the wrong image. If they are indeed re-releasing the wind up version I guess maybe they figure it would appeal to younger kids

Hey if they made the walking features have leg articulation that was somewhat realistic - I'd get one or 2 .

Analyzer said:
Please say that the retailer grabbed the wrong box art for the AT-AT

If the scale of 1/100 is correct, then that is definitely the wrong image. If they are indeed re-releasing the wind up version I guess maybe they figure it would appeal to younger kids

It is a solid no for me if that is the case
Click to expand...

It's listed as part of "The New Star Wars Line" from MPC: $34.99 US for the AT-AT. Not sure if that helps answer your question or not. The other two are listed at $30 each.

The wind up walker I believe is around 4" tall. That is smaller than 1/144

It's 2021, right? Sigh. Sorry, I can't get even a little bit excited about re-pops of 40-year-old inaccurate model kits. IMHO, releasing this stuff just pushes the hobby backwards, not forwards.
J

I see your point - but think of it as a couple of baby steps backwards (repops of older kits) to make real steps forward (new kits). I have no doubt that the new kits they make will be high quality and for the most part accurate... Hey gotta leave something for us true modelers to do

RPF PREMIUM MEMBER
When Round2 bought Polar Lights, one of the first things they did was start re-popping Trek kits. They were all cleaned up tremendously, though. I'm not sure if they re-did the tooling or if there are arcane ways to rejuvinate worn tooling, but the decades-old kits that came out of those re-pops had no flash or other die-wear hallmarks.

They were still as accurate or in- as the originals, of course, but it also gave 'em a leg up to start releasing new tools. Which they've been doing pretty steadily. I figure much the same for the Star Wars kits. I'm definitely getting one of the wind-up AT-ATs for a friend who got the Revell TLJ "Gorilla Walker" for her son... only to not be able to finish building it with him, as it had two 'lefts' of one piece-pair, and no right. Contacting Revell customer support got them... another 'left'. So I want to clear the palate of that experience and give him something simple to build that also does something when finished.
T

I'm still in team Bandai... even if their kits were small, at least they were new and of wonderful quality. I doubt that any other manufacturer will do better than that. If Round2 makes something good I will of course buy it, but until then I hope Bandai just continues.

I would like to have repops of the prequel kits from AMT though... a few more N-1 and the Jedi Starfighter kit (which was far more accurate than the Revell offering) would be nice.

Honestly, I'm skeptical of the "these old kits will help pay for new kits" theory of these re-pops. I'd like to see the sales numbers. I suspect the thinking is closer to "we have these molds, and people on eBay are selling the existing vintage kits for $20-30, so we could be getting that money instead of some hoarder selling their stash on eBay." It's just using an existing asset (the mold) to make something they hope someone will buy. Is making a new kit necessarily dependent on re-popping old kits? I doubt it. Bandai didn't have to start with re-pops of 40 year old kits to start its line of new kits. If Round 2 wanted the Star Wars license but didn't have ownership of the old AMT molds would they really only be able to make 50% less new kits than they would make by first selling re-pops? If R2 thinks it can make money on the kit, they'll make the kit. Re-pops probably help in that it lowers the financial risk of each individual kit because there's far lower R&D and tooling costs, but it probably has more to do with creating a "line" of products to bring to market than the re-pops themselves being so wildly successful that they cover the costs of new kit tooling. I dunno. I look at re-pops like the "Tomorrow is Yesterday" Trek kit -- where R2 just took a dusty Lindbergh jet model mold, added it to their existing mini-Enterprise mold, and put it in a new box -- and it makes me sad. I'm sure the R2 employee who came up with that idea got kudos from his colleagues for finding a way to kill two existing assets with one stone, but there's also something darkly cynical about it. It's a "these suckers will buy anything" mentality that makes me feel like deep down the company thinks we're all fools. And they're probably right.
T

... and I doubt that there is a market for completely out-dated small-ish X-wings, AT-ATs and B-Wings given that we now got far superior kits of those subjects in true collector scales. They would need to be really cheap to make someone choose the old AMT X-Wing over the Bandai one (which is already cheap for what is in the box, and compared to other manufacturers).

The "serious collector" and the kids/casual


Collectors will not be the ones buying these kits unless they want to for completeness sake.

I do not think Round 2 is trying to compete with Bandai in that regard.

They are aiming for the kid/casual impulse buyer who will be browsing Wal-Mart or other big box store shelves and pick the kit up. The MSRP may be around $30 or $35 but I am sure you will see these selling for less in places like that

Don't underestimate the appeal of those big chain stores ordering tens or hundreds of thousands of kits to stock the various stores.

It makes business sense and is a win for Round 2. It is essentially found money
Last edited: May 14, 2021
T

Wait, are Round2-kits sold in places like Walmart in the US?

I had no interest in the repops of the MPC Eagle kit (especially since I got 2 of them in 1999), but some folks did buy them which made the new tool Eagles and Hawk possible. And if the new tool Star Wars kits are at least as good as those then we should all be happy.

robn1 said:
I had no interest in the repops of the MPC Eagle kit (especially since I got 2 of them in 1999), but some folks did buy them which made the new tool Eagles and Hawk possible.
Click to expand...

I guess my question is whether this 'some folks buying a few re-pops made the better new tool kits possible" theory is an assumption we are all making or is it a fact? Did the MPC Eagle re-pop really sell that well? I passed on it the same way as robn1 did, but I scooped up the 1/48 kit the day it was in stock. I totally agree that re-pops are essentially "found money" but the down side is that it floods the market with crappier kits. Yes, there are casual modelers or impulse buyers who might not care, but wouldn't it be better for the hobby if those same buyers were getting simply a better model from jump? Wouldn't the process of building it be more enjoyable, the end product more pleasing, and therefore the entire modeling experience overall better? I guess I look back at my own frustrations as a young modeler building the MPC Falcon or star destroyer models and knowing instantly that "these don't look anything like what I see on screen and in pictures." Compare that to building ANY Bandai kit. They go together with precision, they are in mostly consistent scales, and they look like the filmming miniatures. It certainly serves R2's bottom line to push the narrative that we all need to buy lesser kits to get better kits, but R2 is going to make that better kit anyway if it thinks it can make money. Star Wars is not Space:1999. It's not like it's a mostly cult-appeal British TV show from the mid-70s that is really only still relevant because it had a few cool spaceship designs. It's Star Wars for heck sake.