So I was over at my Parents' house yesterday and they had pulled out an old toy of mine that they thought I'd like to take home with me. It was my old Fisher Price Movie Viewer (I think it was called this as the side label had been torn off for decades).


This is one of them- 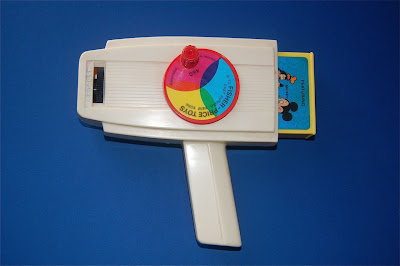 So this was a hand cranked movie player that you inserted a cassette into. The cassette had a movie actually on film. You would look through an eyepiece and point the viewer at a light source. Cranking the handle you could control not only the speed of the film, but you could go backwards or forwards as well (which was really, really cool for a five year old in 1975 :lol)! Best part was the film was on a loop, so you didn't have to rewind it once the movie ended.

(Do you kids know what it means to "rewind" something? :confused :lol)


The movie supplied with the player was a 1937 Disney cartoon called "Lonesome Ghosts." There were other cassettes you could buy separately.

So with a look of glee on my face I decided to relive my childhood and play the film. To my astonishment I realized that "Lonesome Ghosts" is pretty much the plot for "Ghostbusters"!

The cassette is only maybe two minutes of film, but the full length cartoon is on you tube:

Check it out! :lol

They even end up covered in sticky white goo at the end! (Please... no innuendo jokes :rolleyes :lol).


Funny enough- the online pic of the viewer is from a blog in which the author says "Lonesome Ghosts" is "Ghostbusters" as well.

I had that and about 2 cartridges..Lonesome Ghosts was one of them. I must have seen it thousands of times!!

Yeah I think I may have had a couple of other cassettes.

One thing I do remember is having a Six Million Dollar Man cassette (which included the title sequence and feats of Steve's strength), however looking online it turns out to be from a different movie player altogether. Unfortunately that player is long gone methinks.

I wish I could remember the other ones I had..this one stands out for sure. I know I saw actual video clips from this toy online.
H

I had this one too:

I remember a Star Wars one as well.
H

The Dude said:
I remember a Star Wars one as well.
Click to expand...

Surely not!!!! I would have never let that leave my side if I had a Star Wars cartridge!

I remember that 'movie' - I can't remember how many times I watched it as a kid.
A

I read somewhere that the INCEPTION movie was taken from an old Scrooge McDuck comic story. They even posted the original comic pics, too!
I guess there really are no original ideas left, after all..........
H

Of course the opening sequence of Raiders of the Lost Ark was ripped off of a Scrooge McDuck comic.

Goofy actually says "I ain't afraid of no ghosts"

I still have mine! Loved that thing. I was always pissed that the supplied caasette was labeled Lonesome Ghosts but it was actually Mickey in Jack And The Beanstock.

Atlanthia said:
I read somewhere that the INCEPTION movie was taken from an old Scrooge McDuck comic story. They even posted the original comic pics, too!
I guess there really are no original ideas left, after all..........
Click to expand...

It's more that the Scrooge McDuck comics were so far ahead of their time it's unreal. My friend has 2 GN compilations and the stories are the kind that as a kid you enjoy on one level, but as an adult it's like "WHOA" at some of the stuff in there that only an adult mind would catch.

RPF PREMIUM MEMBER
At the San Diego Comic-con they were selling these by the pound. My daughter was less then impressed with what I called a "1970s portable DVD player". I had the Star Wars movie too as a kid.

I had one of these with a pirate ship scene with Mickey and Goofy, and a lot of water splashing. What a great toy.

omg, these were the best! my friend had one with the star wars detention scene in it. I spent the better part of my summer with this glued to my face going frame by frame and backwards and forwards. I attribute this device to my getting a job editing for film and television.

coincidentally, I was trying to figure out what this this was called a few days ago! thanks for the thread!

to this day, i can't watch the new hope detention scene without flashing back to sitting by the kitchen window, cranking the viewer watching hand and chewie blow up the cameras.
Last edited: Nov 23, 2011

I had the Lonesome Ghosts one, and several Star Wars ones. They were super 8 film. I opened up the Star Wars cassettes and spliced the clips together to run on my projector. Star Wars at home on the big screen, before big screens and even before we had a VCR. Silent of course.

Now I wish I had the cassettes still intact, of well :unsure
Last edited by a moderator: Nov 23, 2011

Love that short though and I did indeed have one of these when I was a kid!

I found the "other" movie viewer; it was made by Kenner:

Aside from several "Star Wars" cassettes (with different clips from "Star Wars" 1977) and the "Six Million Dollar Man" one I mentioned, they also had a cassette with clips from Ridley Scott's ALIEN! :eek

Man I would LOVE to see what's on this clip! :eek

By the way, don't put "Kenner Movie Viewer" into a google image search with the safe search off... well... at least not at work or around the wife/kids. :lol

RPF PREMIUM MEMBER
Had the SW and Disney ones as well. If I remember correctly, you could also get a device that the cartridges snapped into to play them on a small screen.

William Hurt has passed away

Sidney Poitier has passed away