Hi! Where can I find a mork vest and any of the multicolor t-shirts he has? 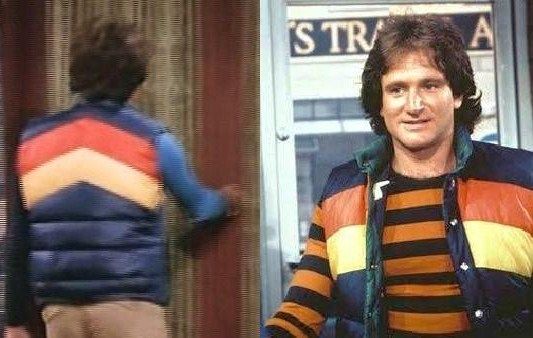 Did you check the other thread you started?

Hi! Does anyone know where I can get/order a vest like mork's from mork and Mindy??? Or how I could make one? I have no sewing machine (it broke) and im not good at sewing by hand.

JW Foust said:
Did you check the other thread you started?

Hi! Does anyone know where I can get/order a vest like mork's from mork and Mindy??? Or how I could make one? I have no sewing machine (it broke) and im not good at sewing by hand.

Morkandmindy4ev said:
Hi! Where can I find a mork vest and any of the multicolor t-shirts he has? View attachment 1414933
Click to expand...

His vest was a Ski daddle

RPF PREMIUM MEMBER
The shirt with red and yellow sleeves I have done approximately a few times.
-A
L

I have one of the Ski Daddle vests. I bought it off ebay 5 or 6 years ago, and it took me several months to finally get one. They were becoming scarce even then, but one would periodically show up on ebay, and it was usually the wrong size. I got outbid another couple of times, until I finally won one. I think I paid $38 shipped, but don't hold me to that. During that time, I also checked etsy, online vintage clothiers, you name it, but ebay was the only place I ever saw an actual Ski Daddle. If you want to get one, you're just going to have to put in similar work, checking those places everyday, and maybe putting out a request on the Want to Buy section here.

There's a couple of things you should know off the bat. One is that sizing is generally a bit smaller for that era, and obesity was rare, so you won't find anything larger than an X-Large, and it will probably be smaller than a men's X-Large made today. If you're bigger that that, you are out of luck, unless you just want a display piece. And the vest that I have, and that pretty much everyone else has is slightly different than the one worn onscreen. The onscreen version has a forest green inner lining, whereas the one you will find online has a navy blue lining. The online version also has two snap tabs on the back that are red and yellow, that can probably be removed with a seam ripper, though I've left mine as is. I think this is likely a latter version of the vest, and I've never seen the other one anywhere, or seen anyone who has that version.

There's a reason no one can answer you about the shirt, and that's because there's nothing commercially available that is even close. There's a reason that virtually everyone who tries this costume makes it with the orange and blue striped shirt and the blue pleated pants, and that's because you can at least find something that looks like the real thing. The shirts were obviously special made for the show, so there aren't even vintage shirts that could be used. I'll be dating myself here, but I was a kid when the show came out, and lived through the Mork craze, and there were a few knock offs back then, mostly unlicensed. A local department store actually sold a version that was pretty accurate, except the panels were printed, not sewn, the fabric was cotton and not spandex, and there weren't any side panels. If you want this shirt, you're either going to have to sew it yourself, find a relative or friend with the skills and desire to do it, or hire a professional. If you can't find the vest, you could also have one made. Green Pepper sewing patterns has a vest pattern for men and women, and one of the variations is perfect.