RPF PREMIUM MEMBER
Hi all,
First my apologies if this has been covered elsewhere. I've been away for quite a while, but my interest in building props has been rekindled. I've tried searching for a few hours now and haven't been able to dig up the info I'm seeking. I'm working on a Power 5 and I'm wondering if the rectangular greeblie(s) on the right-hand side has ever been identified. I've seen various interpretations in different build threads, but they all seem to be different. For reference, I'm talking about this (pic from the SW Chronicles Book): 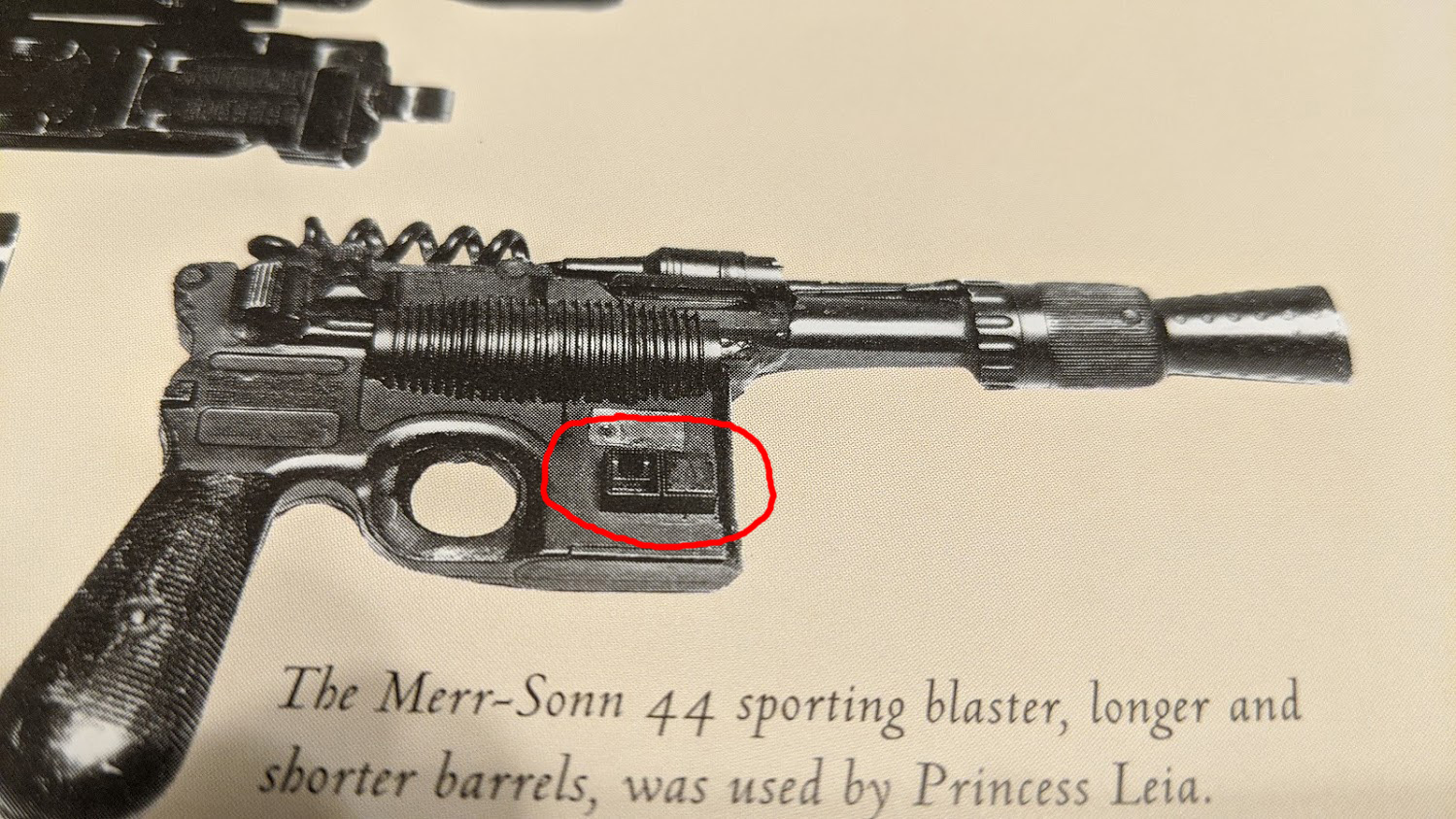 RPF PREMIUM MEMBER
They are square push buttons and the open one has the cap missing. I'm not sure if the exact model of push button was found though.

kurtyboy said:
They are square push buttons and the open one has the cap missing. I'm not sure if the exact model of push button was found though.
Click to expand...

Thanks for replying, kurtyboy! That's what I thought they looked like. Hmmmm...

kurtyboy said:
They are square push buttons and the open one has the cap missing. I'm not sure if the exact model of push button was found though.
Click to expand...

You and OdiWan72 haven't solved that already?! I'm disappointed.

I gotta do a new version of this. I had the Boba Debt kit and sold it once we started figuring out what the real parts were. I really did this blaster.

RPF PREMIUM MEMBER
Is there a thread buried somewhere that discusses the greeblies? I wondered if maybe it's buried in the ANH DL-44 thread, which I'm still working my way through. I'm pretty sure I know what the rest of the MSP5 greeblies are, but it'd been nice to be sure.

I spent some time on a couple electronics supplier websites today looking at pushbuttons. I've ordered a couple that might be close.

I gotta do a new version of this. I had the Boba Debt kit and sold it once we started figuring out what the real parts were. I really did this blaster.
Click to expand...

Sorry to let you down buddy :lol

RPF PREMIUM MEMBER
These are the right size but you'd have to fill the indent: 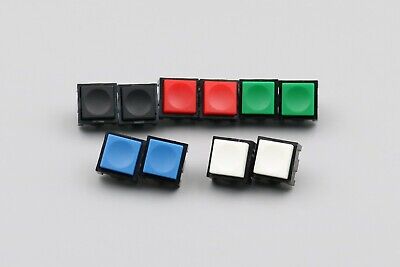 RPF PREMIUM MEMBER
This is one of the ones I found that I thought might work It seems to be about the right size, without the indentation on top:

RPF PREMIUM MEMBER
Yeah I wondered about that. I also ordered these. You'd have to cut the shaft off, and the plunger might have too high of a profile, but they are 12mm. So we'll see when they arrive on Friday. 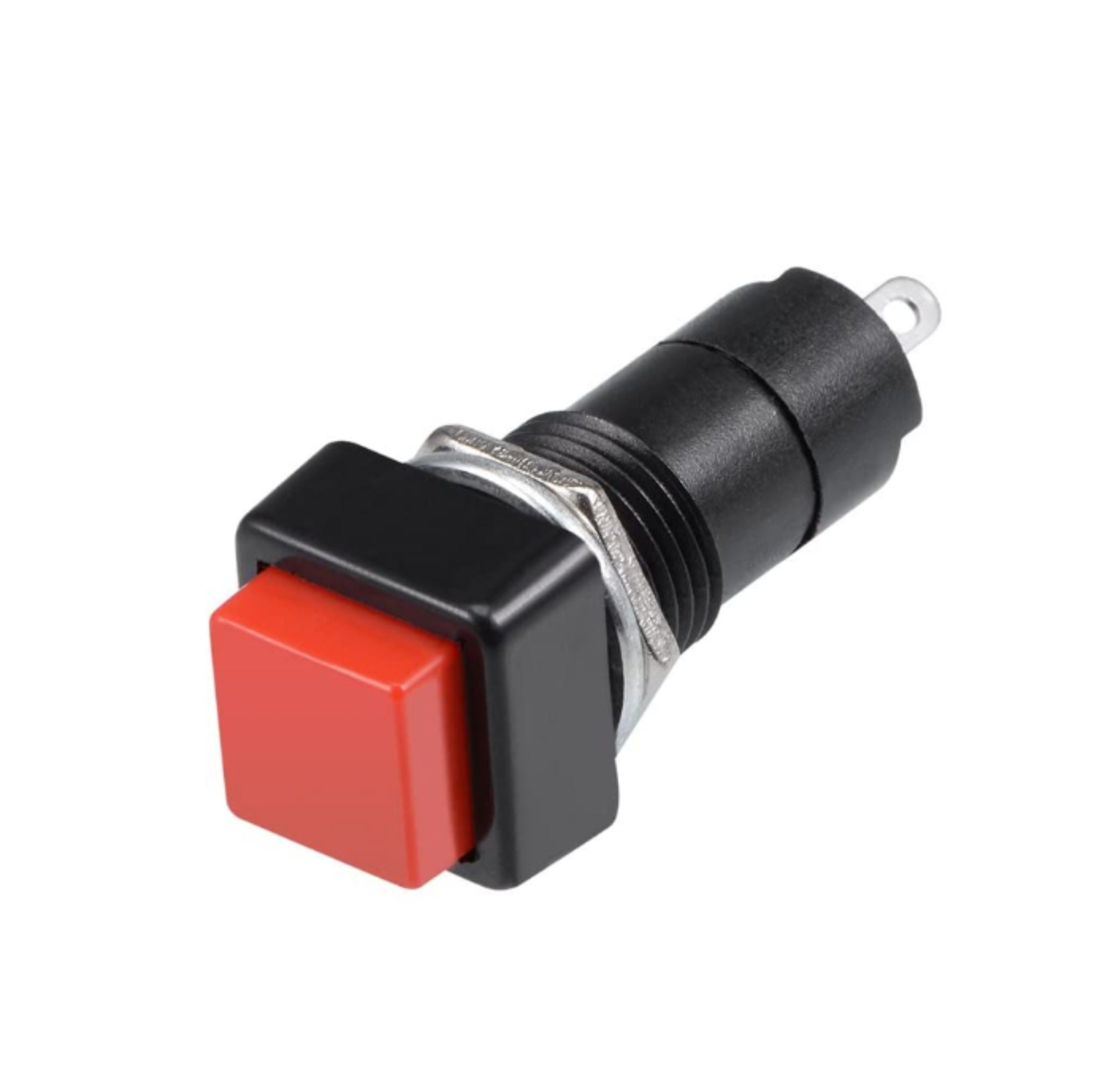 RPF PREMIUM MEMBER
I saw those but they are a bit too ronded at the corners.

RPF PREMIUM MEMBER
I thought I'd share the results of the 3 different "buttons" I ordered. None of them are an exact match, but it was in interesting experiment.

Here are the three I ordered: 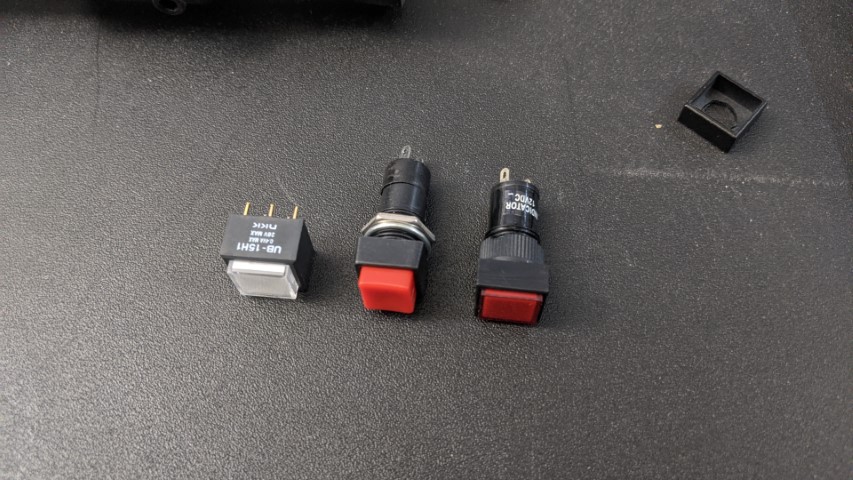 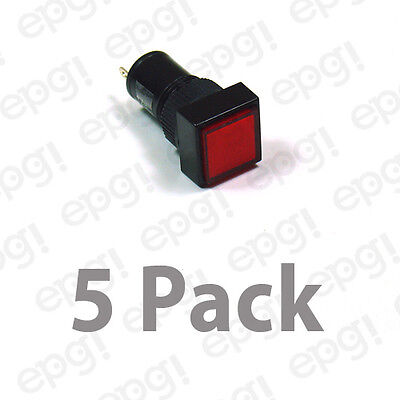 The third is actually just an indicator LED, not an actual switch (I was tired and didn't even notice that when I bought them).

The first thing is that obviously, none of these are the exact item used. So that's probably a deal-breaker for pretty-much everyone on this forum. But hopefully this might help the investigation. If not, then the rest of this post is probably a waste of bits.

Anyway, I took each switch and painted them up. In the case of #2 and #3, I also took one apart to represent the chronicle photo. I couldn't get #1 apart without destroying the housing. With that being said...

#1 (as kurtyboy pointed out) is pretty big, and I concur that it's too large. Not only does it have too big of a footprint, but it's really deep/tall as well. The plus side of it is that it's easy to snip off the terminals on the bottom to glue it on, and it still feels like a functional button. But, placed on the blaster they are large. Also, as already mentioned I couldn't get the actuator out without destroying the housing, so the odds that the screen-used switch had the actuator removed/broken off without damaging the housing are probably really low. 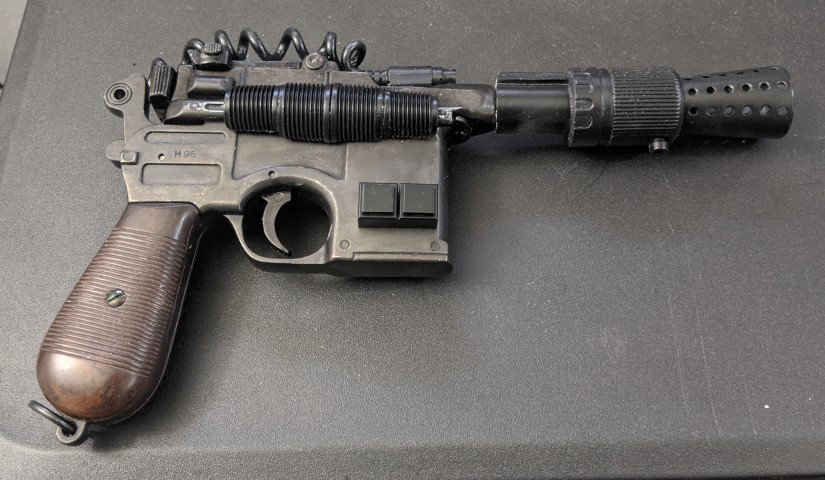 As for dimensions, they actually come in at over 15mm: 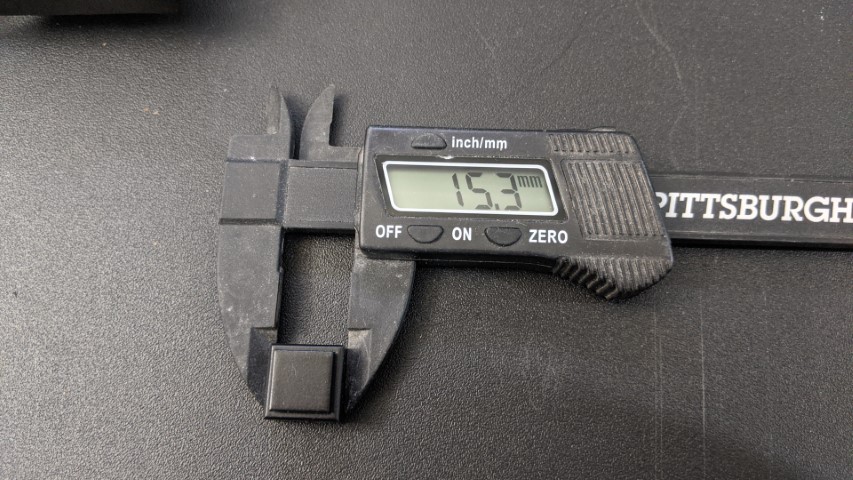 #2 is closer in dimension, but again as Kurtyboy pointed out may be a bit too rounded. I see rounded corners when I stare at the Chronicles pic, but maybe not this rounded. In addition, the sides are tapered, which leaves a larger space between them. The actuator has a slight concave surface to it as well. Finally, when I cut the barrel off, the actual switch mechanism went with it and the entire thing kind of fell apart. I had to superglue the "actuator" in place. 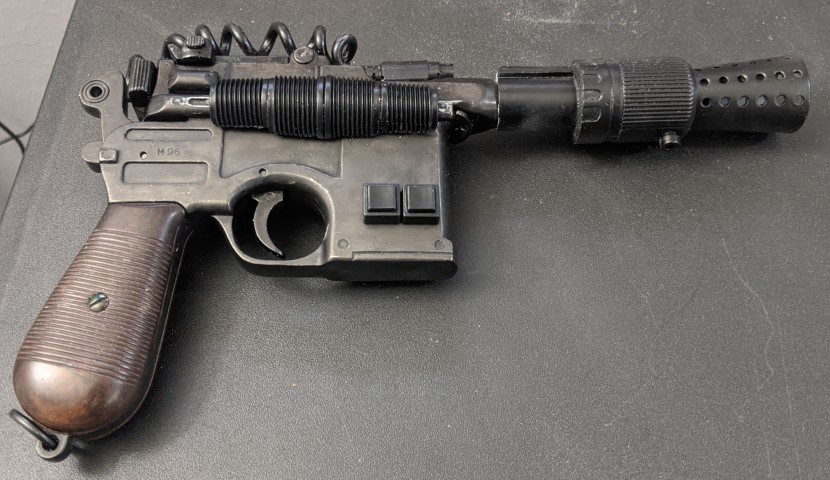 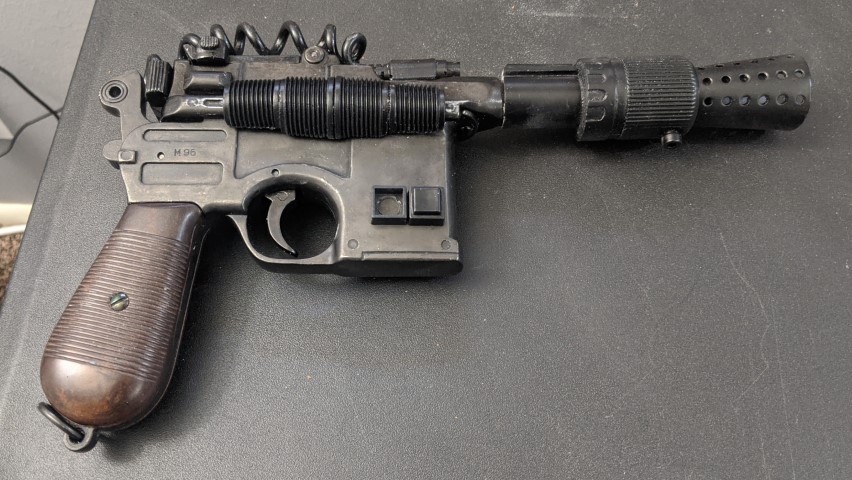 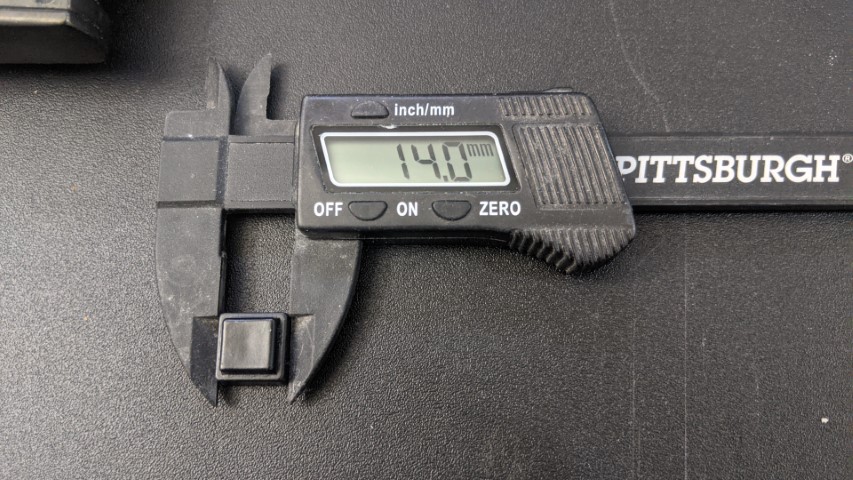 #3, which is actually just a panel indicator light and not an actual switch, I think has the best overall shape of the 3, but might be a tad bit large. The corners are more square however, and the lens actually seems to have a closer profile to the screen-used (based on the one photo). However, it was a bit difficult to remove the lens, I had to push it out from the inside after I cut off the barrel, and it was glued in. 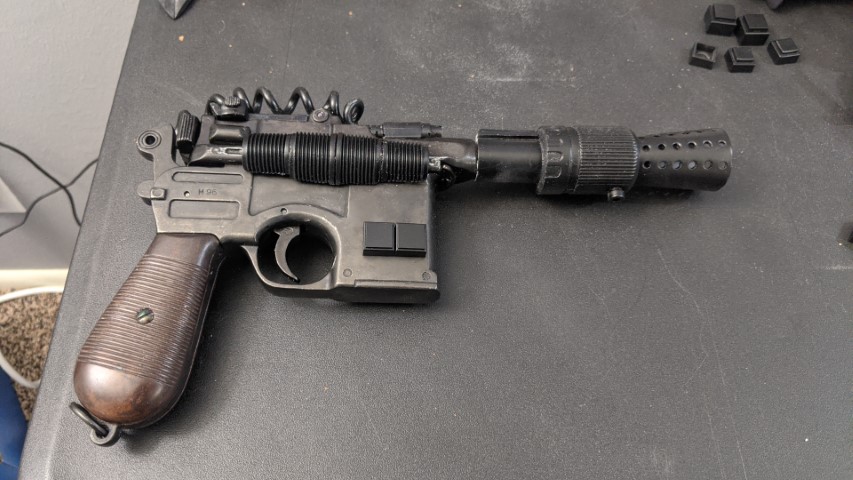 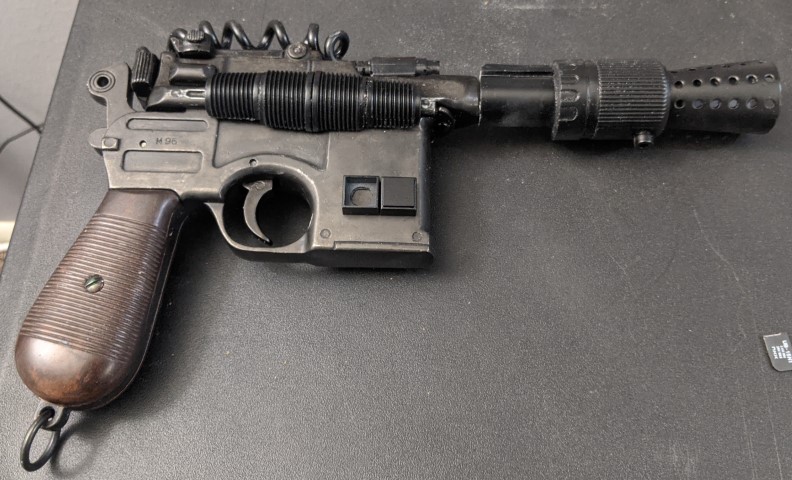 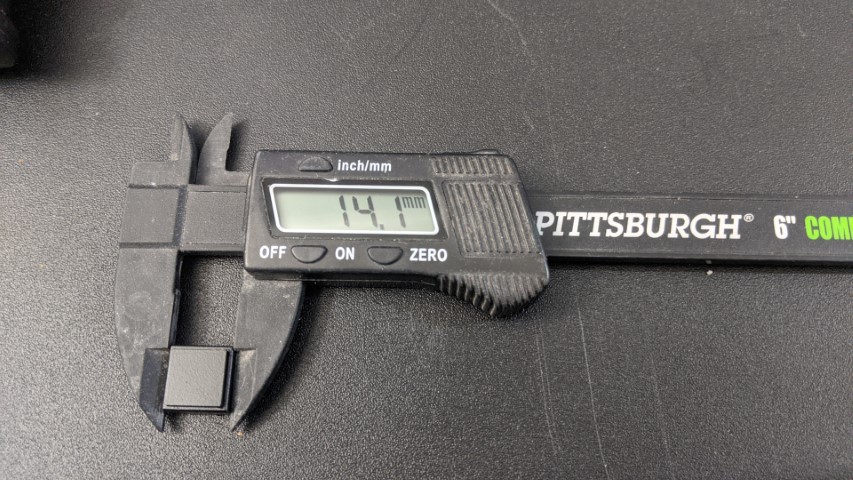 So a few thoughts:
-It is possible that the screen-used part might a panel indicator and not an actual switch, although the fact that you can see what appears to be part of the actual switch mechanism in the broken one on the screen-used prop seems to indicate it was a switch. It could be some sort of bulb contact, but probably not.
-Modern illuminated switches won't be correct as most modern switches use LEDs, which wouldn't have been the case in the '70s (one of the reasons I wanted to test #2).
-It's probably NOT a panel-mount switch (with the long barrel) because the mechanism would probably be in the barrel that was removed. It was probably a PCB-mounted (or some other type of surface-mount) switch or indicator lamp.

C
Has anyone made a lightsaber based on the novel's description?

The Mandalorian Detonator (Chapter 10) - an adventure in conversion