cavx said:
Use baby Powder. Squirt some in, shake and then open the mold and pat to expel the excess. It takes the shine right off, but does not affect the resin. It can also prolong the life of you mold.
Click to expand...

Thanks for the advice, I'll try that next time!

It doesn't matter if it is scented either. I just bought the cheapest stuff I could find and worked a treat.

This looks great! I tried making one from Sculpy a few years ago. I was pretty happy with my ability to sculpt with the stuff, but it deformed a bit when I baked it. Your sculpt is spot on!

Sorry for the huge hiatus, but big progress this past week!
Managed to pull a bunch of class— though the mold is wearing a bit thin... might have to replace it.
Finished trimming the claws today.

Now I'm going through and hand painting each individual claw.

It's not this shiny in real life, I've just got a bright bright light shining onto it.

-----EDIT-----
RIP silicone mold, it served me well. One of the halves of the mold ripped while I was pulling another claw out (a deformed one too ). I'm surprised it lasted this long— was a faulty mold in the first place, but still managed to give me accurate castings.
Last edited: Jul 13, 2018

Well, time to make a new mold— BUT the original clay model from long ago is gone. I could just make a mold from my personal casting, but I don't like making a mold of a casting— you start to lose details, add defects and seam-lines from before, etc. Plus, I don't think my original sculpt was entirely accurate in shape. Comparing it to screen grabs, I think the part of the bone on the bottom of the inside curve should be a bit longer. SO, time to make a new sculpt to mold.

Just roughing out the shape and trying to get the curve and thickness right before going in to measure everything properly.

RPF PREMIUM MEMBER
Continuing to shape it out— it's already a bit more accurate than the first model in several ways: the curved part of the claw is a bit skinnier, the base of the claw is thicker (when Grant is turning it in his hand while in the tree, you can see it's MUCH thicker at the base than expected), and some of the angles and inclines are steeper.

Still a work in progress, of course. The indents are going to be refined and details still need to be added.

RPF PREMIUM MEMBER
I'm pretty close to finishing up, working mostly on smaller details now. I'm working on texturing just to see if it looks right– only one side for now.

And here's a better look at the texturing I've been doing. Last time I actually used a replica of a fossil to imprint texture, this time I'm doing it all by hand.

I'm debating adding the cracks along claw this time, like I did last with the last one— it wasn't entirely screen accurate, but made it look more like a fossil.

And here it is compared to the first model I made. A lot more accurate, fairly happy with it but there's still room for improvement.

I'm going to leave this for now until tomorrow— I've being staring at it for too long.
And I need a fresh perspective; tell me what you think!

Looks great!
I did like the cracks along the claw you had on your first one, it gave it more of a story in my opinion.
That said, if you are going for at 100% movie accurate, then try and stay with what you see in the screen captures

Either way they look great!

Still working on the shape and texturing, but I think I'm getting there.

RPF PREMIUM MEMBER
The first in a new breed of raptor claws.

What's the material these are made from, again?

CT1138 said:
What's the material these are made from, again?
Click to expand...

Are the tiny holes on em part of the texturing you put on the claws or are they in results of bubbles or something from the resin?

ArcSpectator said:
Are the tiny holes on em part of the texturing you put on the claws or are they in results of bubbles or something from the resin?
Click to expand...

A combination of both from the old mold, but I have since fixed that.
B

Does anyone know how thick the claw is?

RPF PREMIUM MEMBER
I haven't posted here in a while, but here's some updated raptor claw photos, with a better camera! 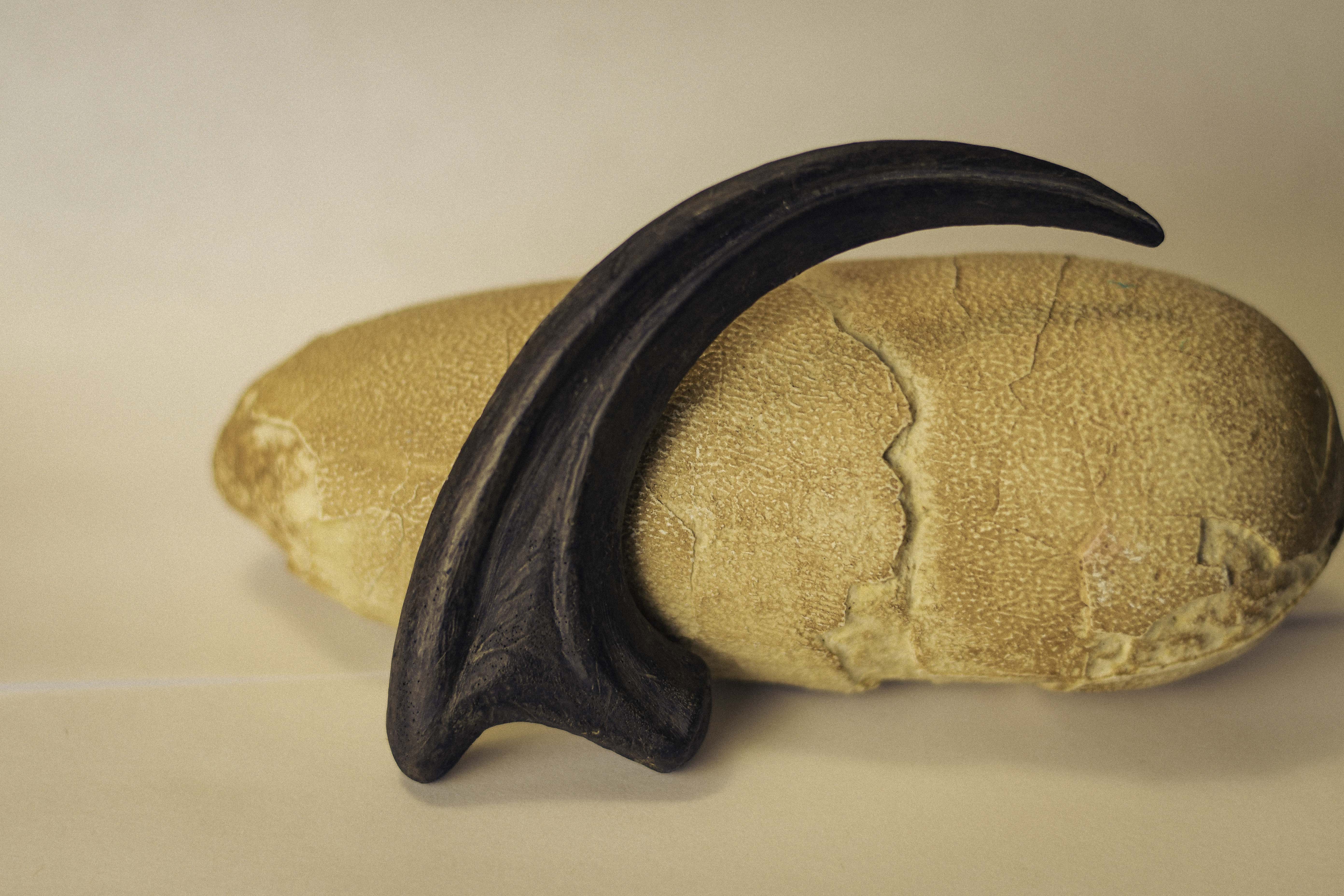 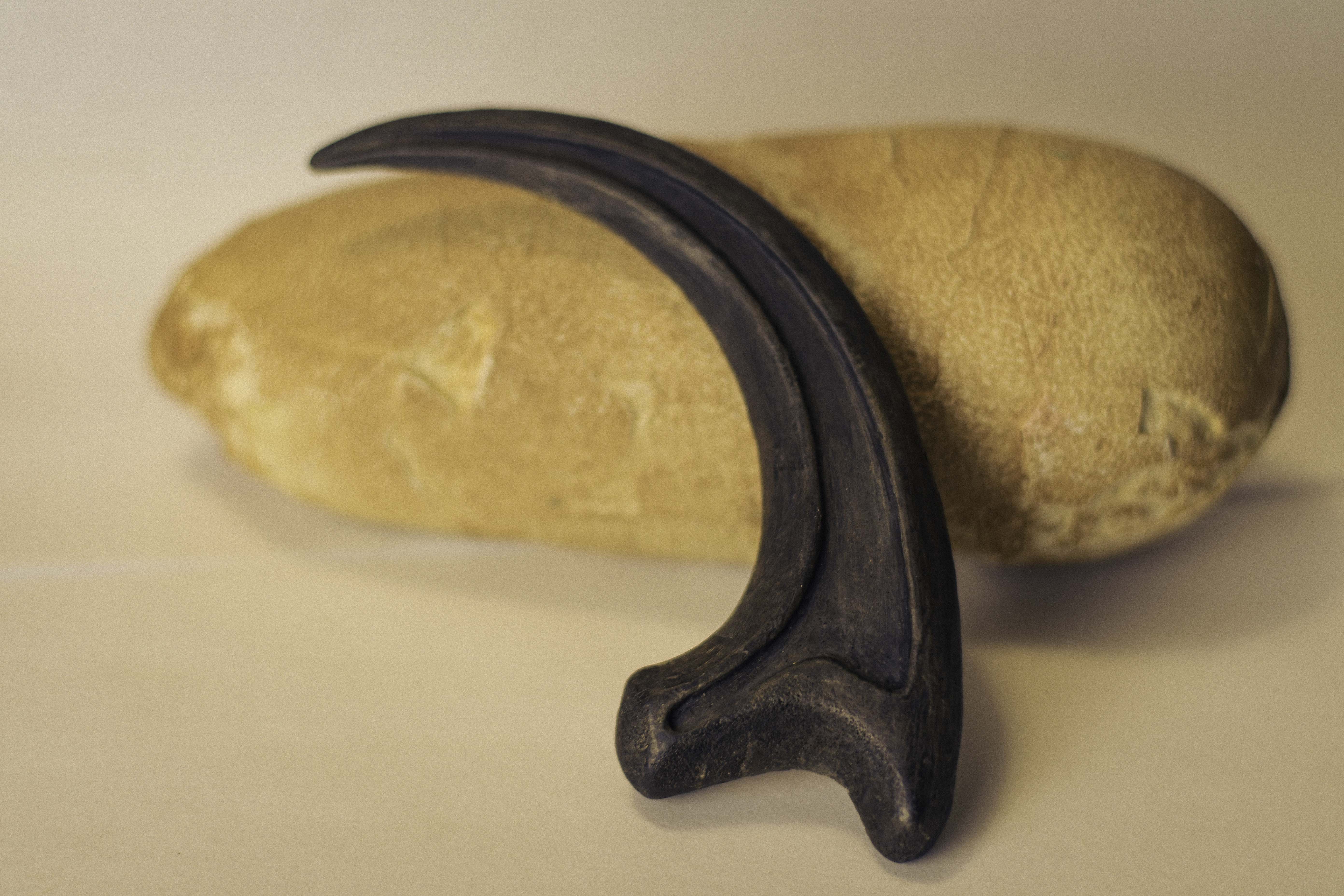 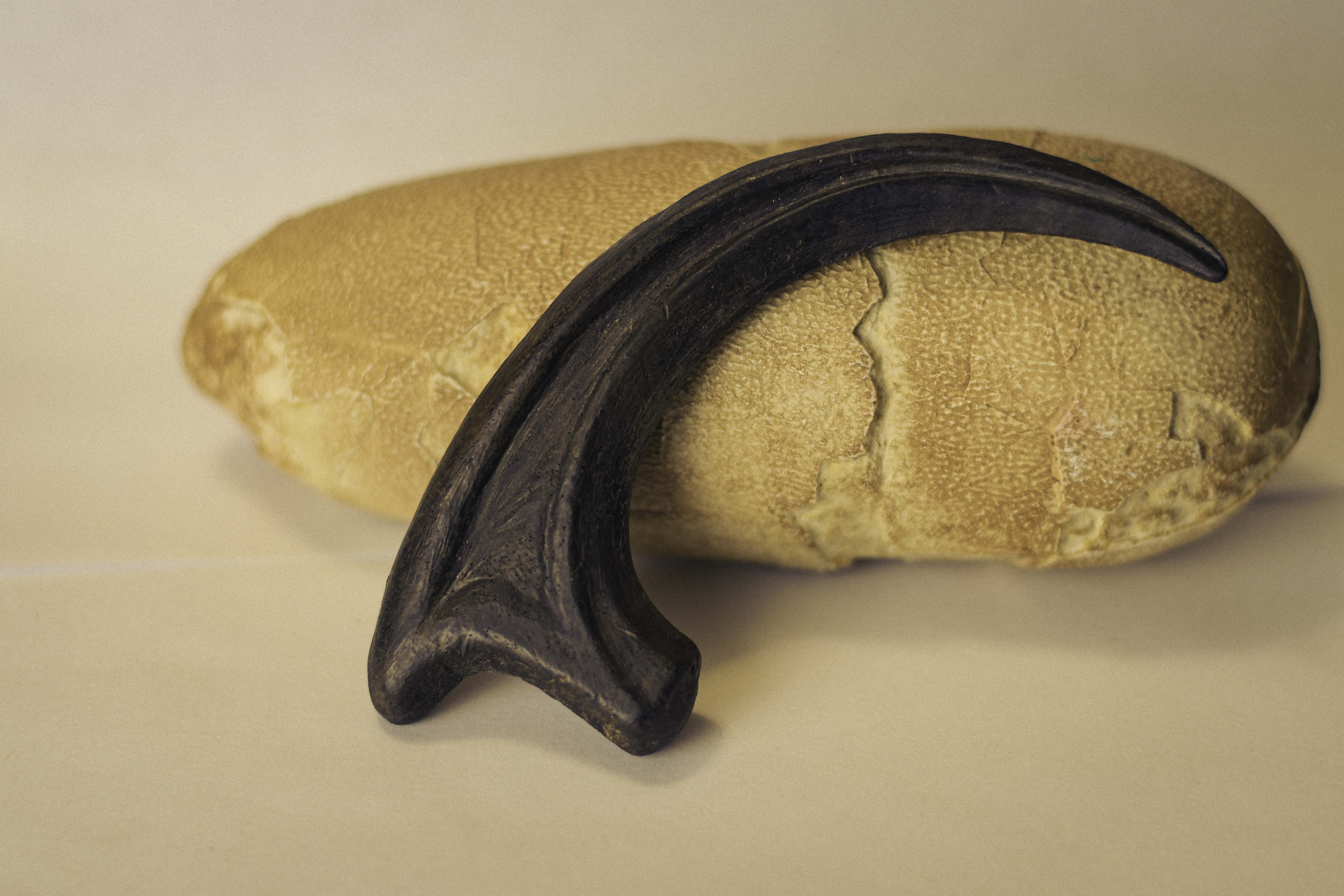 RPF PREMIUM MEMBER
So for the new mold, I decided to try something different:

Using a photo of a claw on this cutting mat, I was able to model a case to scale in blender for the new molding, with keys built in around the claw to help the silicone consistently stay in the right shape each pour. 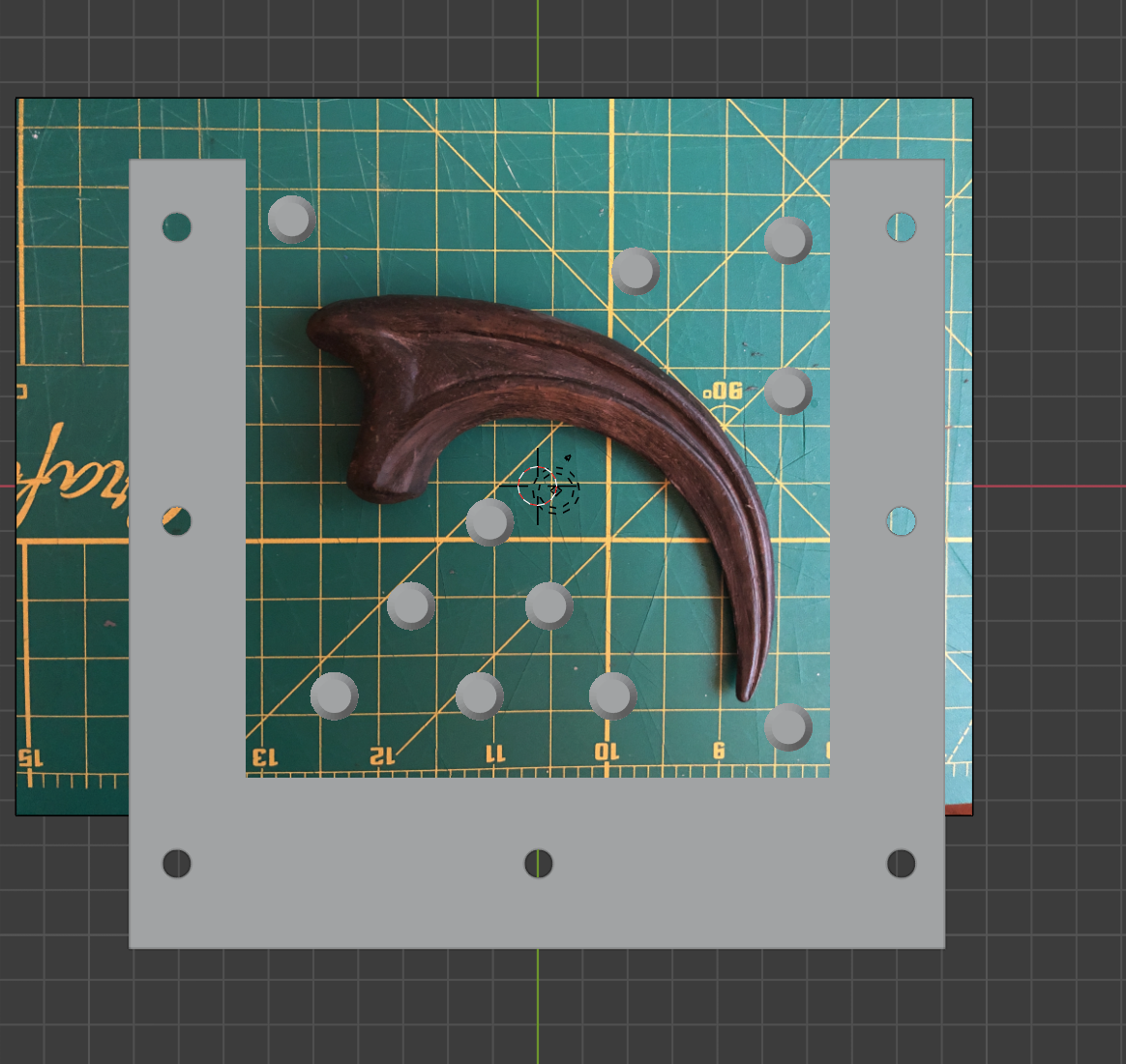 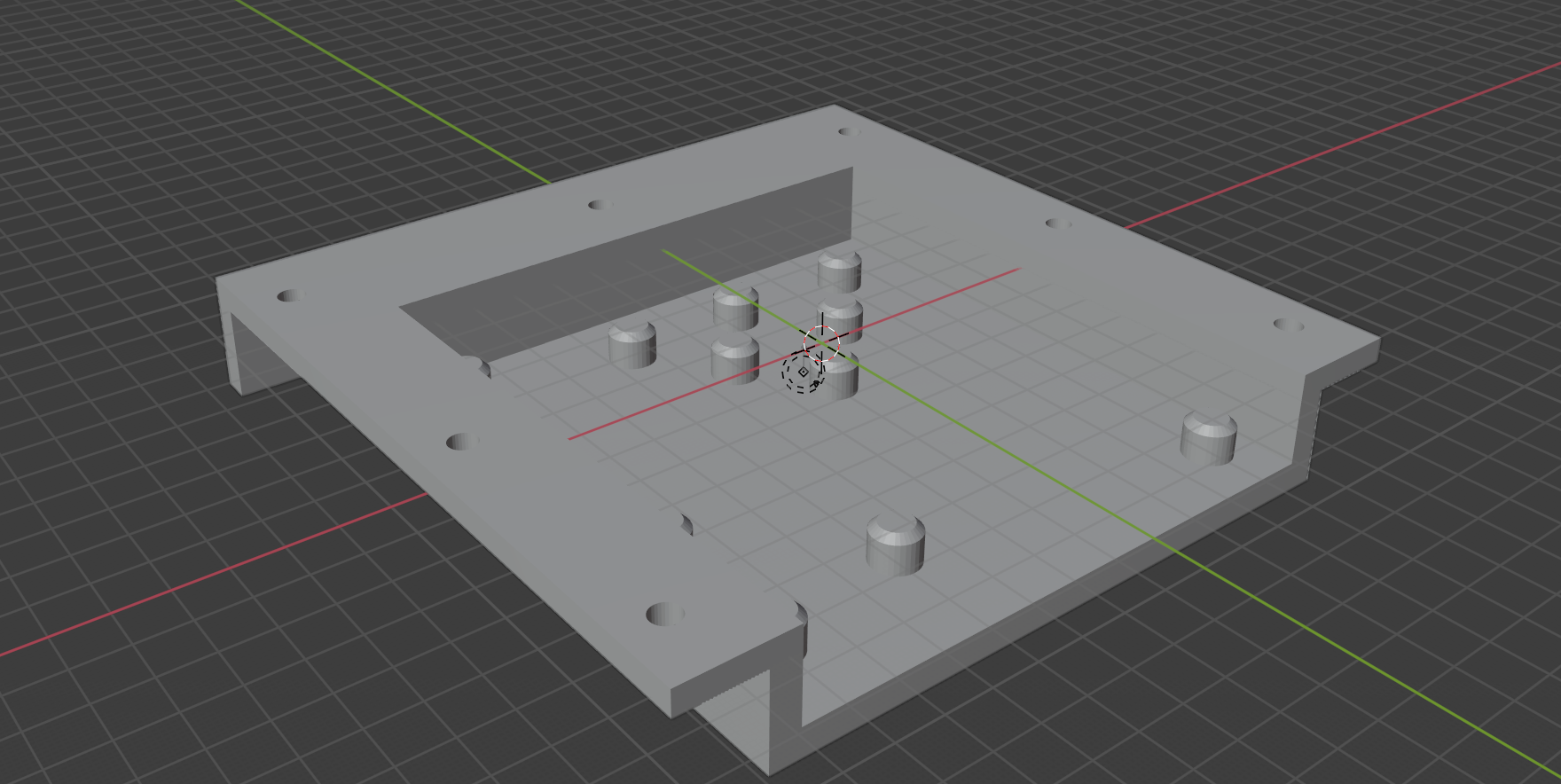 I 3D printed it, flipped it, and printed it again to make both sides. 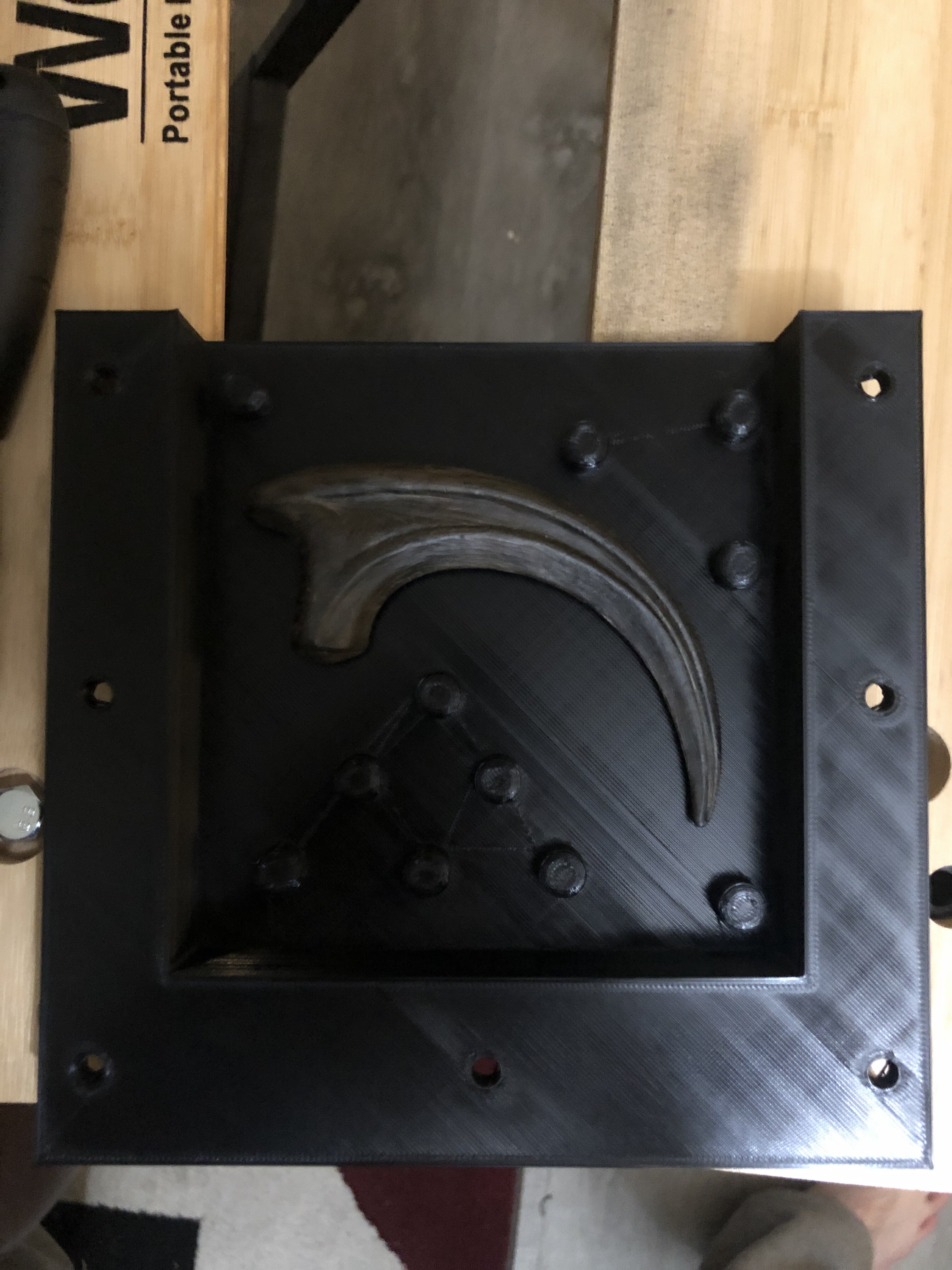 I bolted it together to make it water tight, poured the silicone, and ta-da! Custom fit mold box. I originally used bolts to hold it together, then clamps, but binder clips were quicker and worked way better. 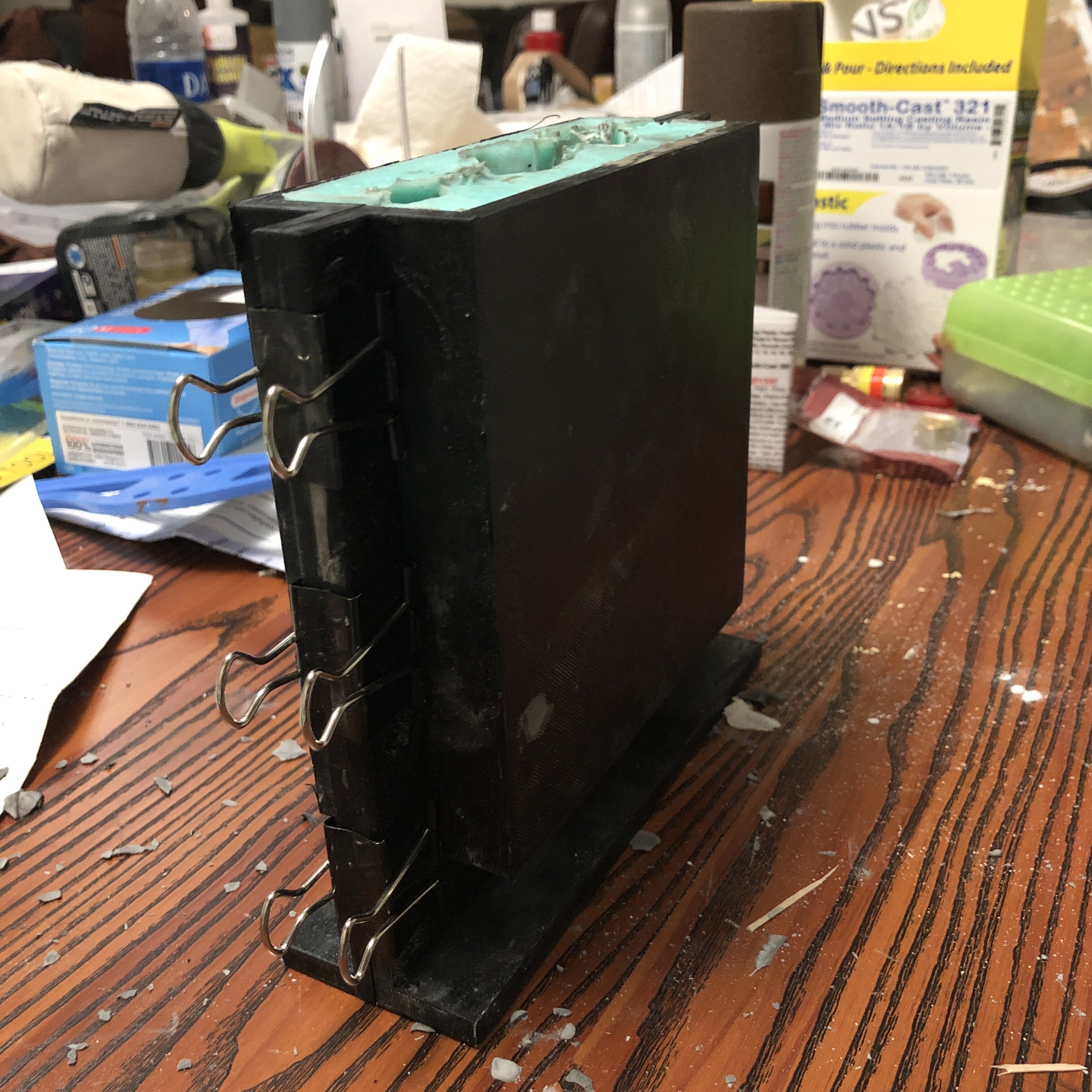 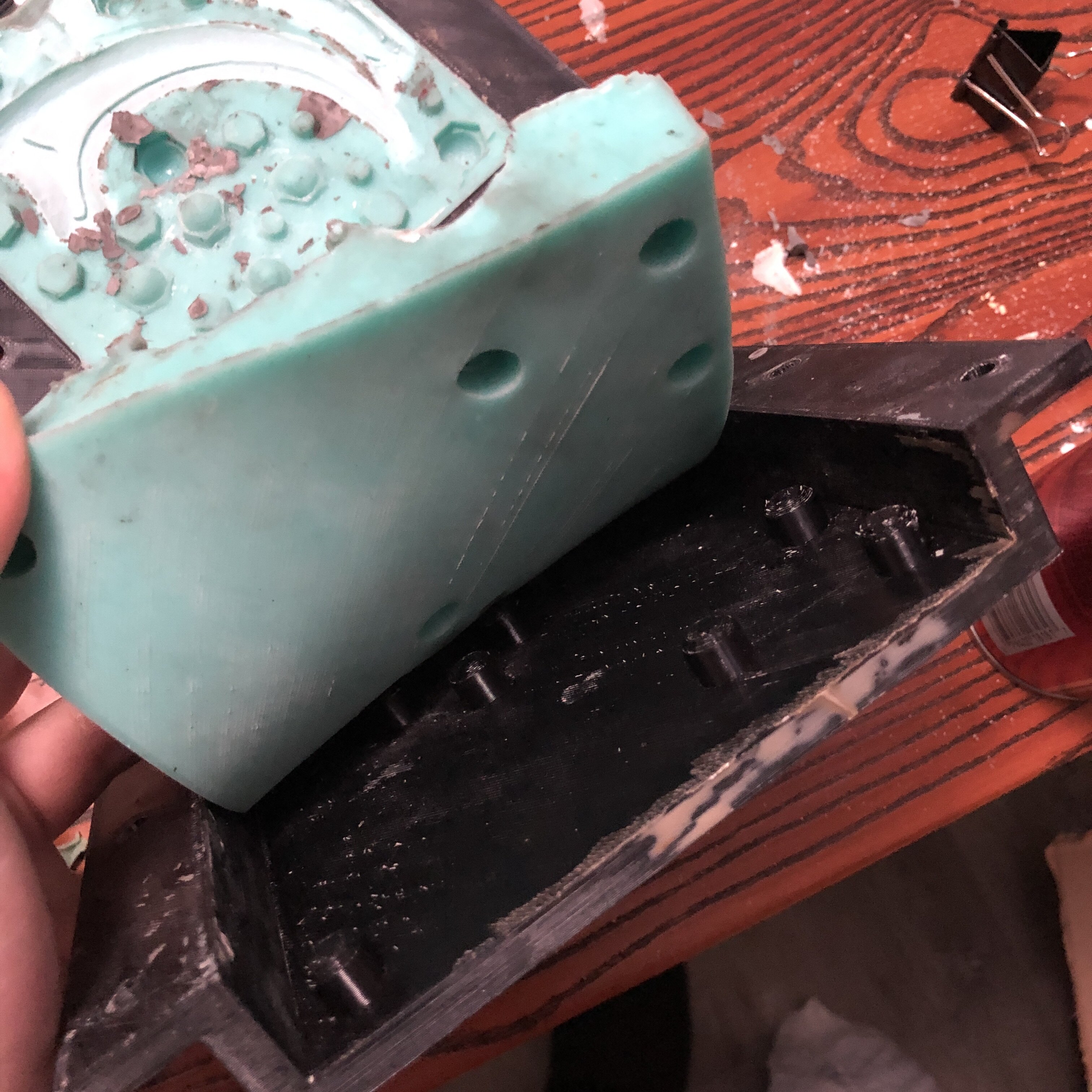 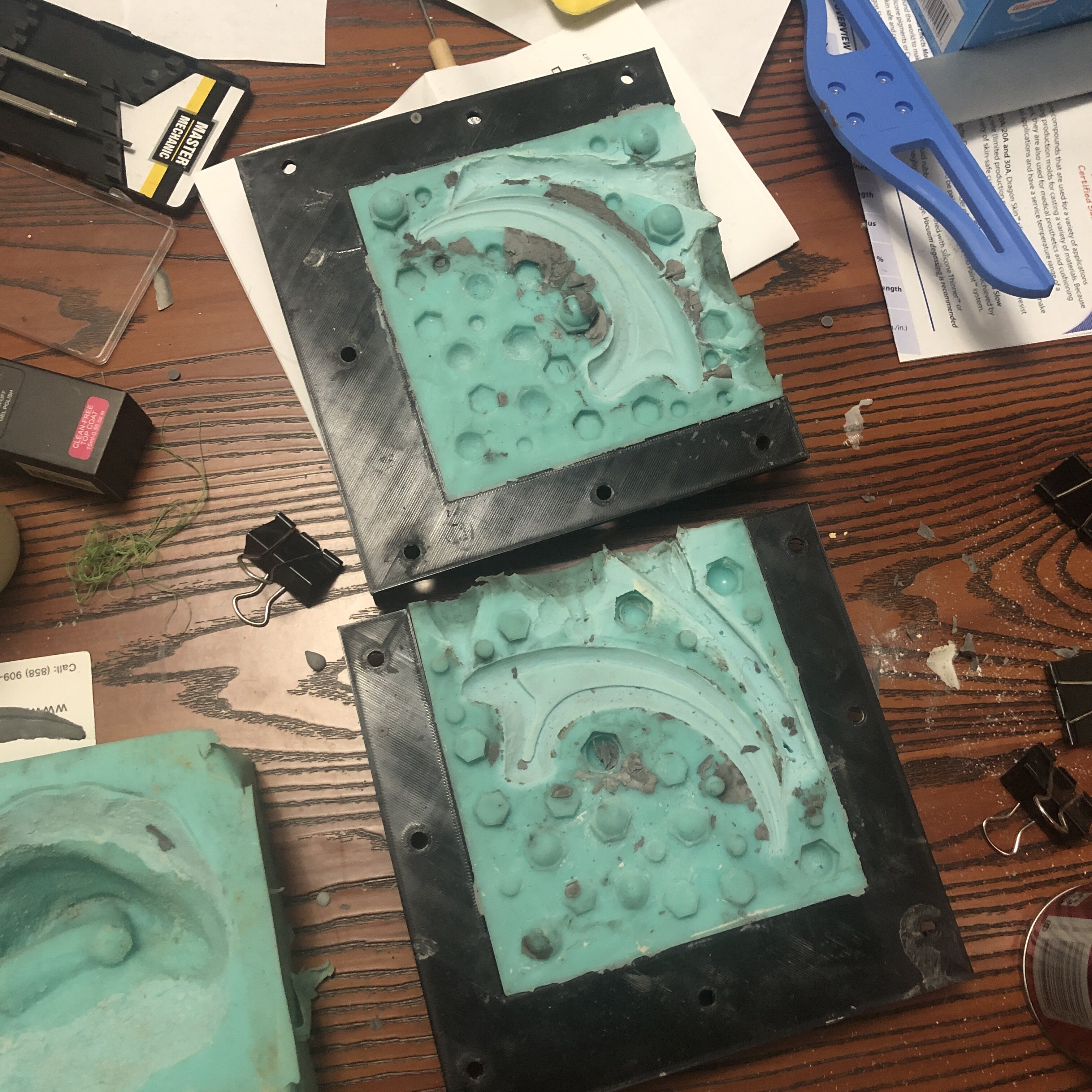 I also sculpted a stand out of moon-sand and eyeballed it to be the shape of Isla Nublar when viewed from the top— but moon-sand was a BIG MISTAKE. I definitely don't recommend using this as a sculpting medium for mold making. I only did it because I had some on hand and though it would work well for that rocky texture. It worked out in the end, but t he silicone seeped into the sand and didn't cure for a while. It was a real mess to clean up. 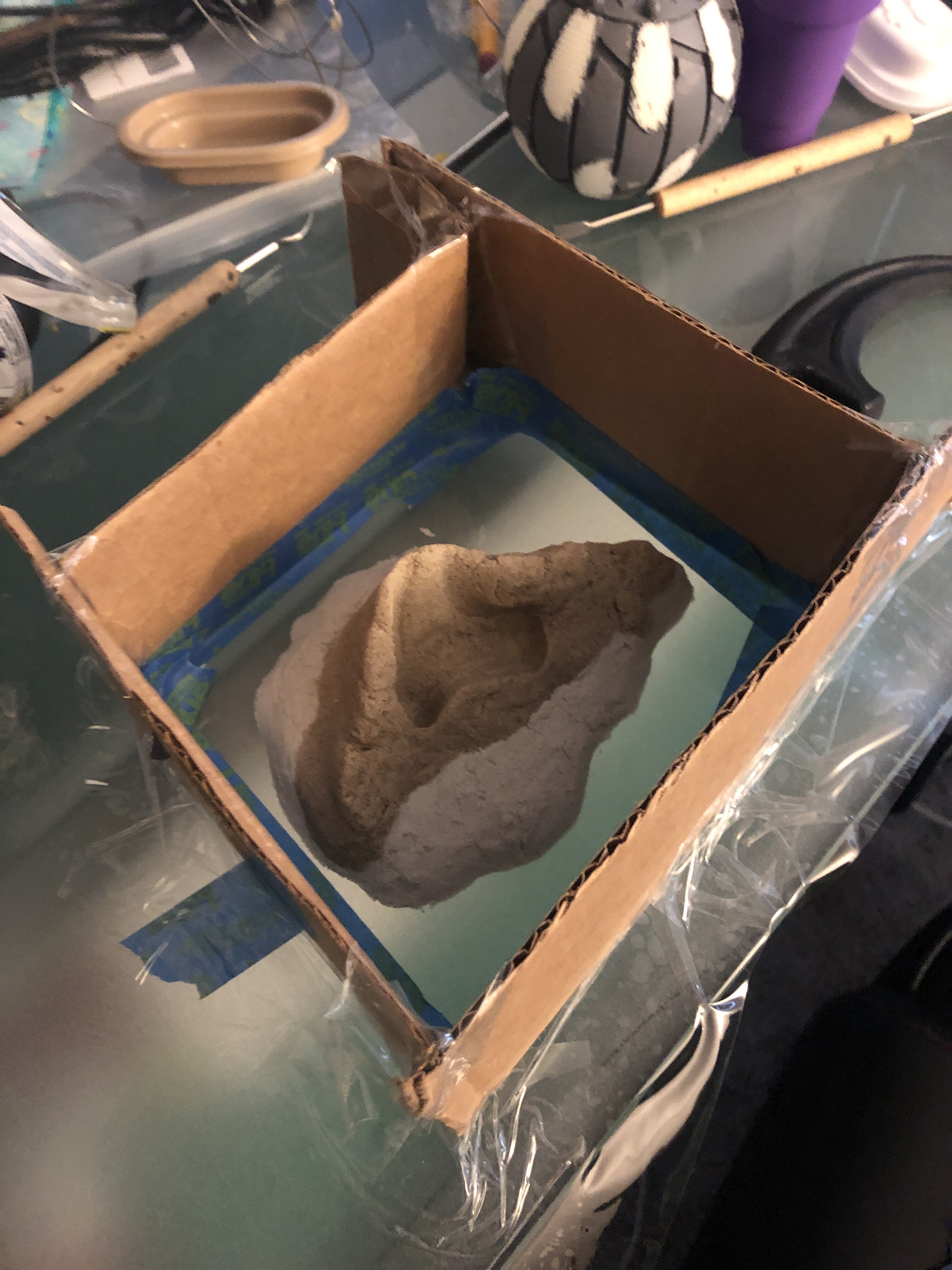 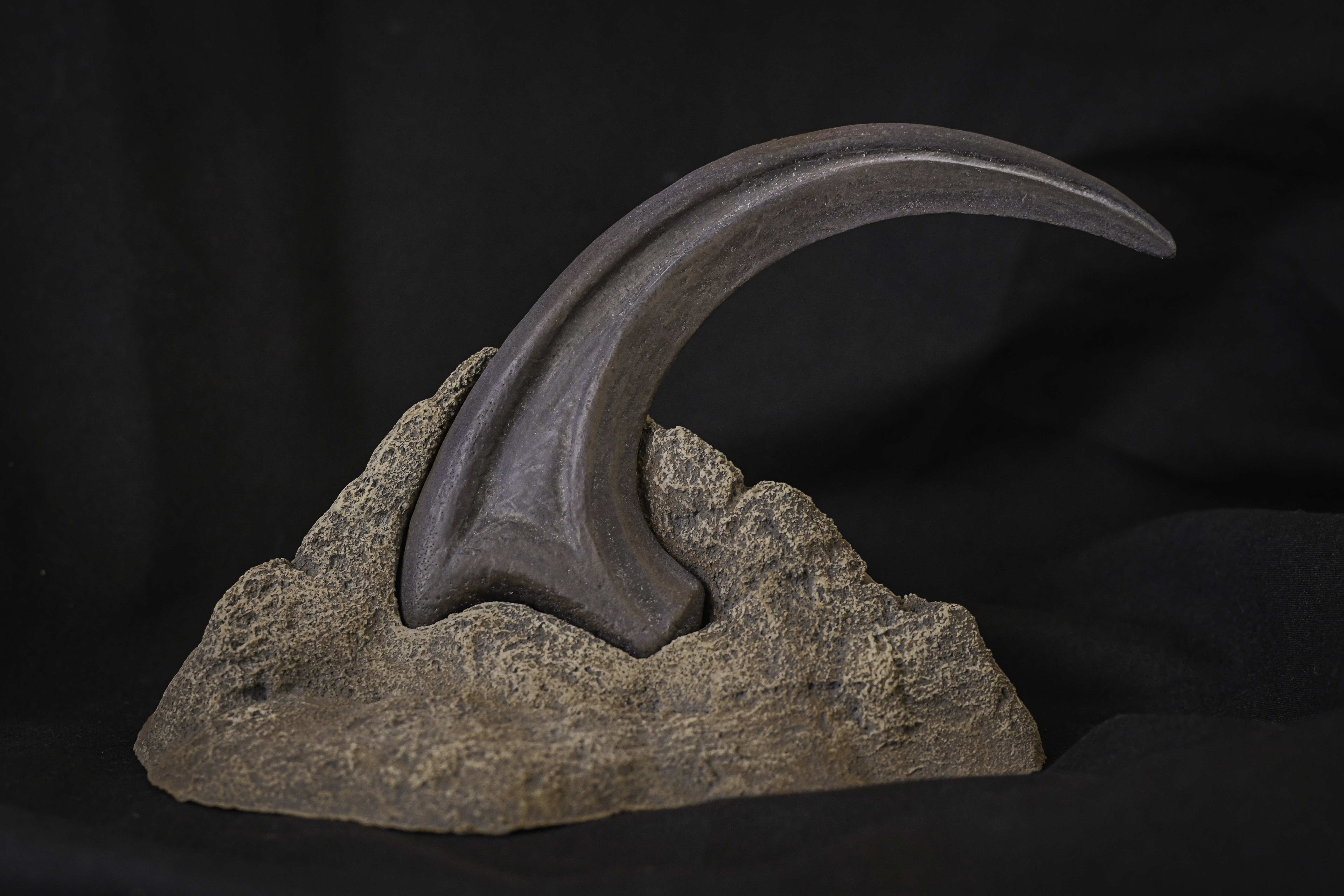 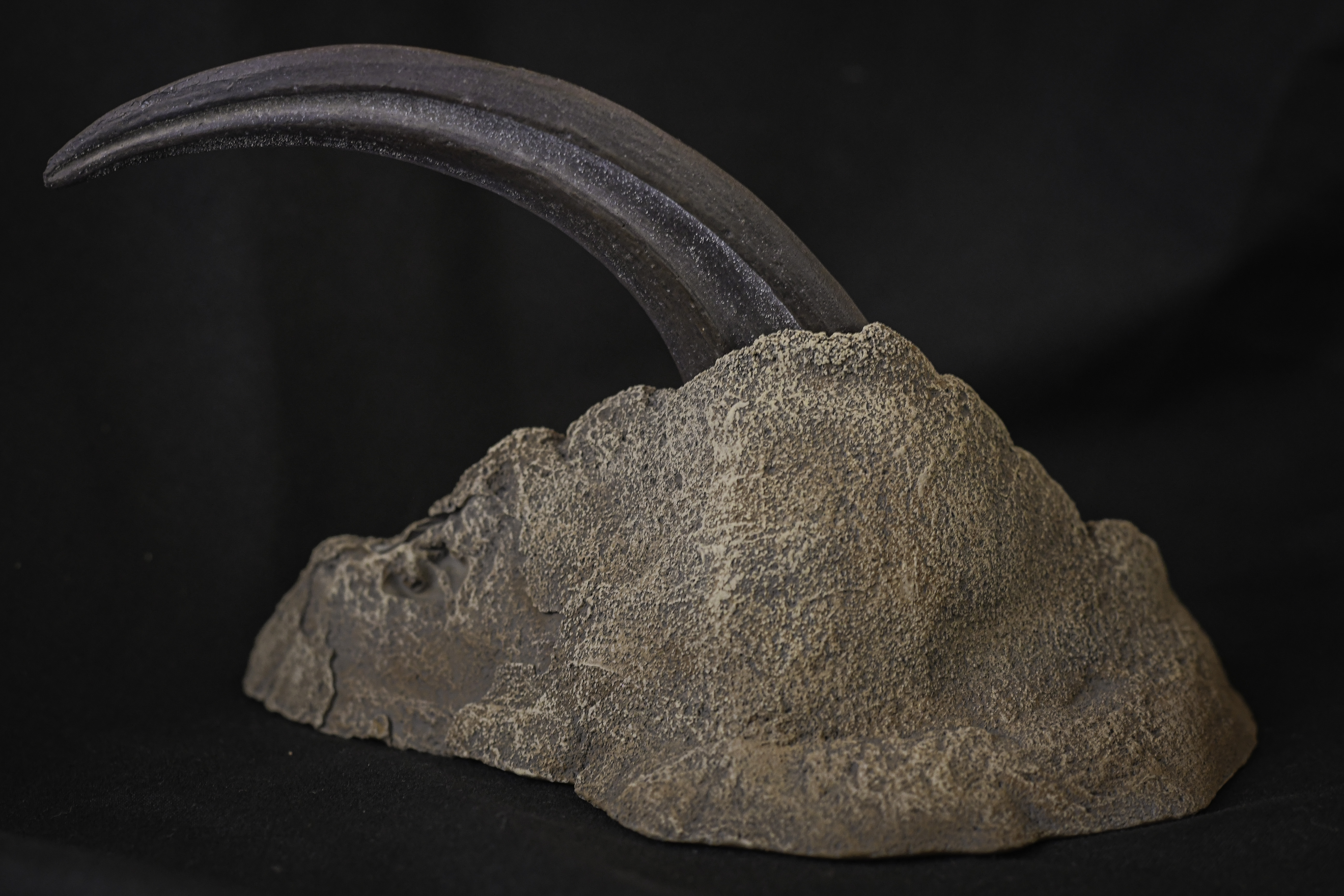 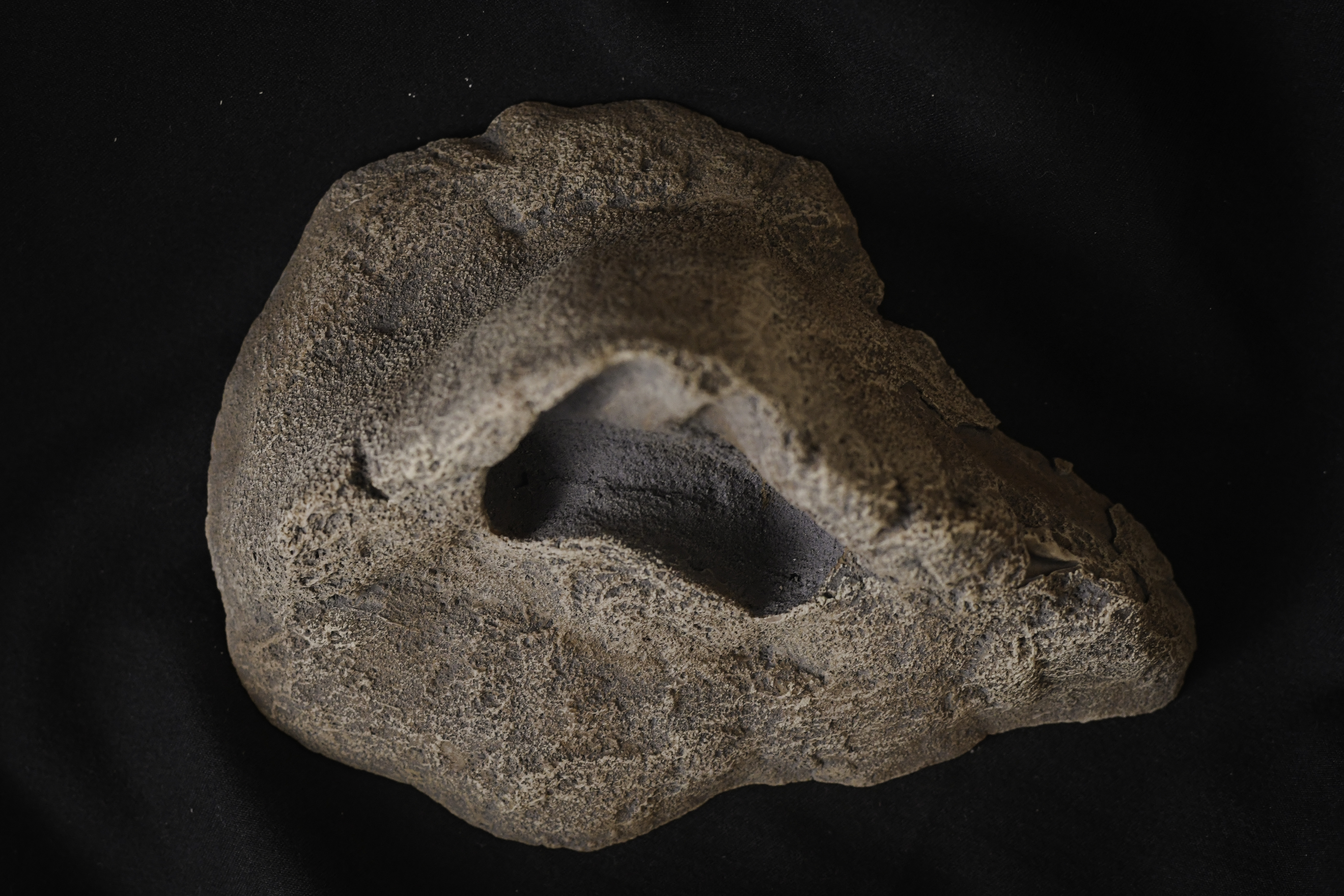 Panting this from the raw color of the concrete was a pain until I remembered I had charcoal concrete pigment. 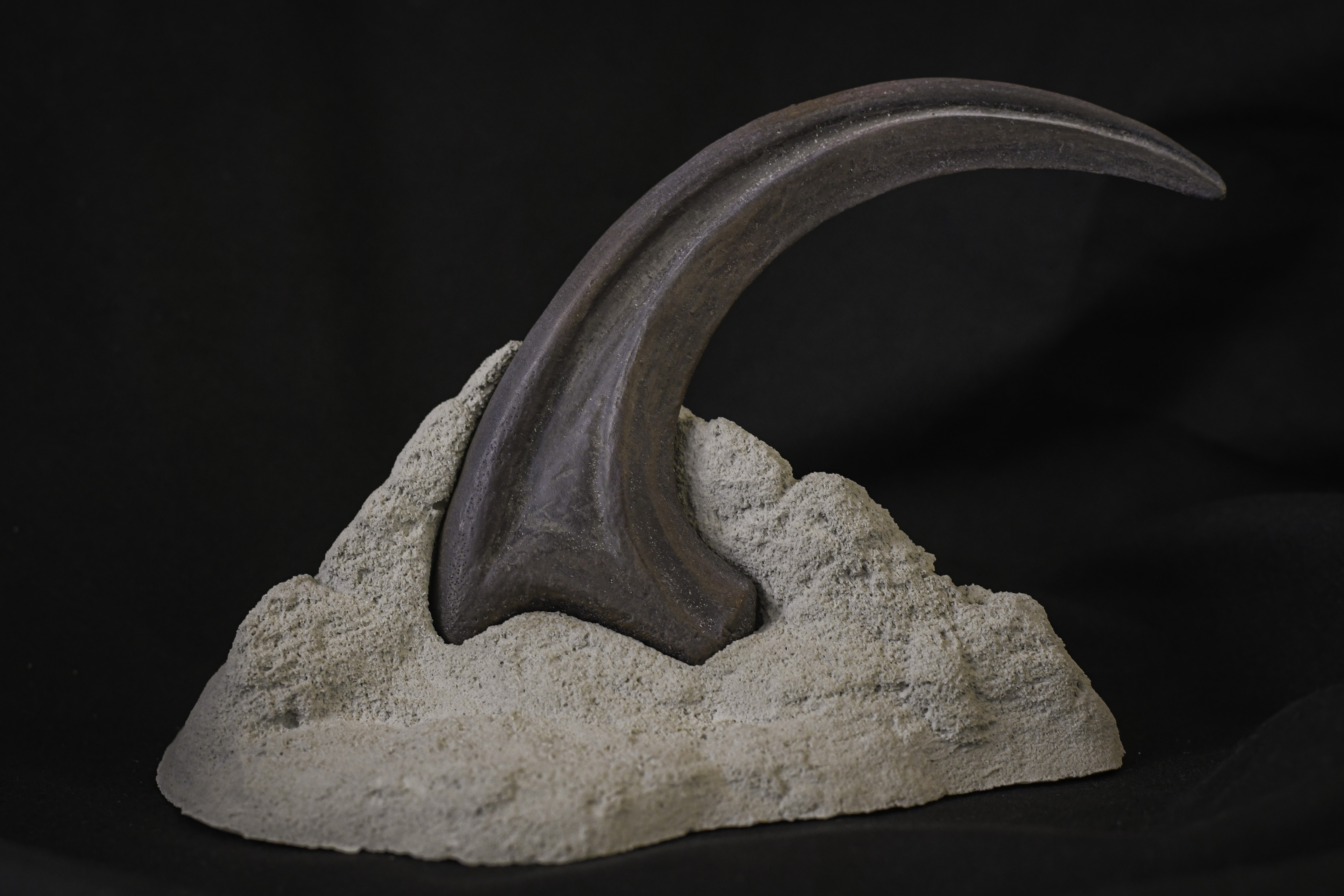 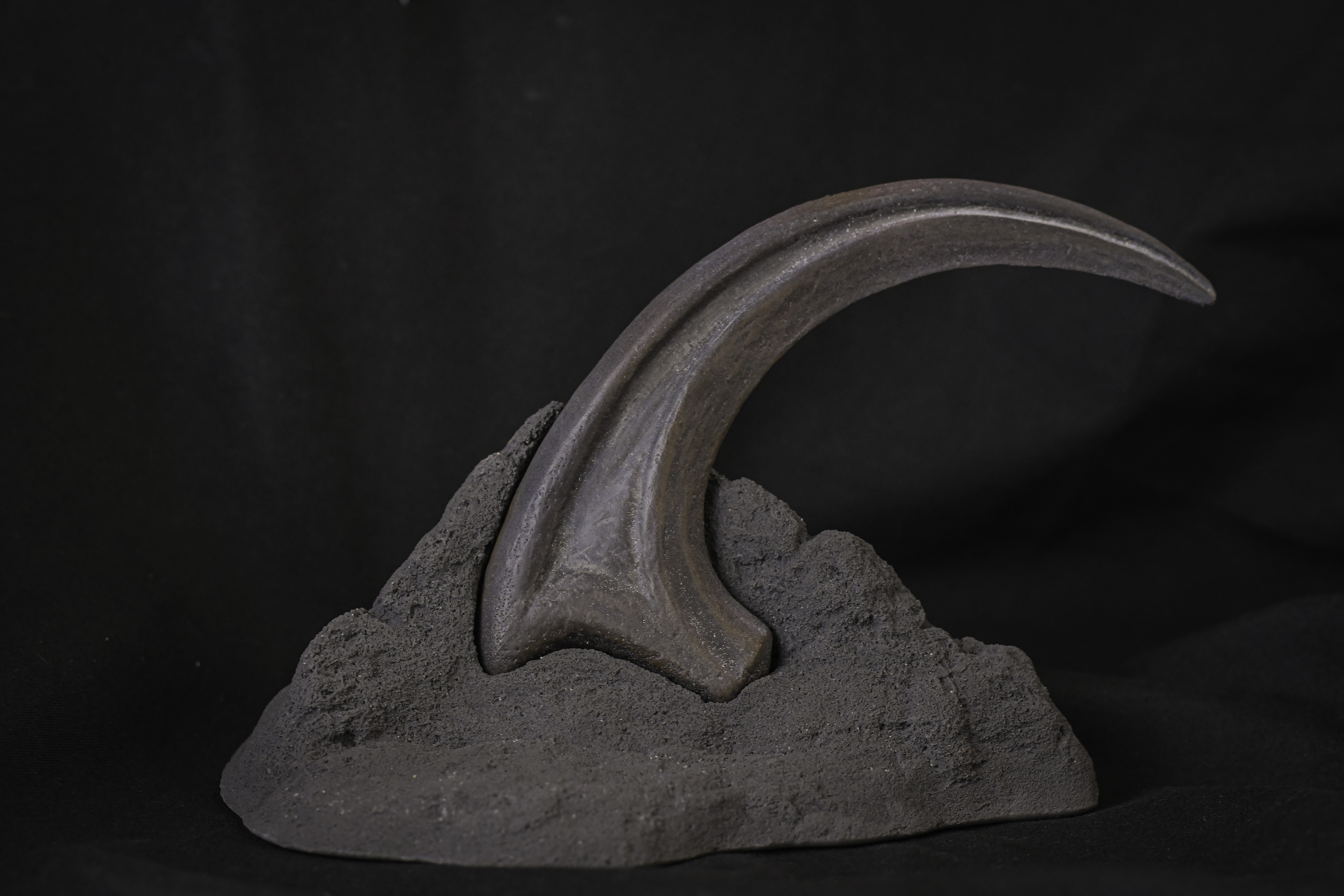 And speaking of concrete, I've also been trying to get a concrete claw because the weight and feel of it is just that much better— feels like a fossil! Too bad it's as delicate as one too... the tip keeps breaking off. I'll figure that out eventually. 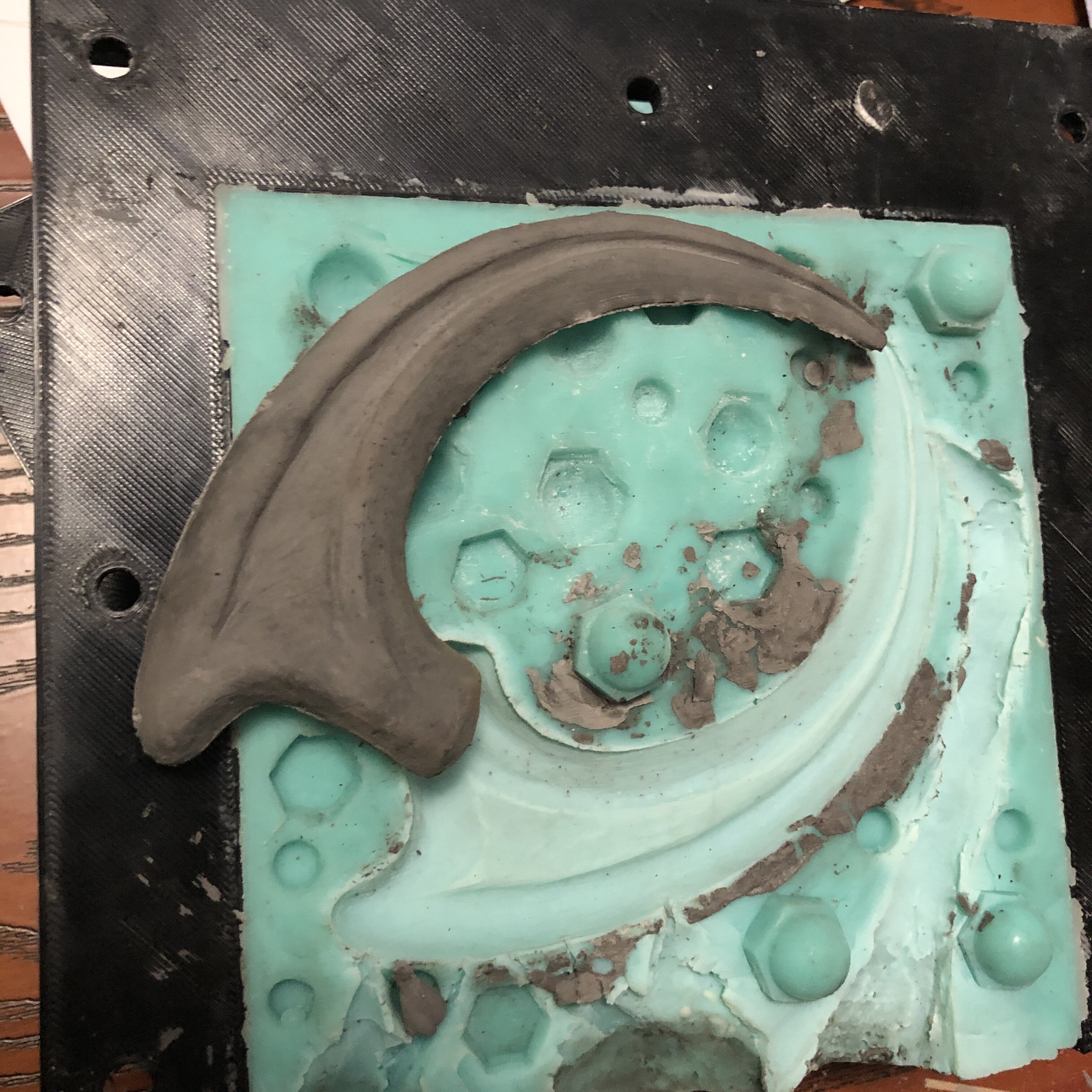