I'm kinda interested in the "missed opportunity" opinion. Would kinda love to hear it.

Too Much Garlic said:
I'm kinda interested in the "missed opportunity" opinion. Would kinda love to hear it.
Click to expand...

Yeah, but... how? Any points in particular that could have been made better?

RPF PREMIUM MEMBER
Saw it today. Phoenix did a great job. But the movie was very depressing and sad. Not sure what they were going for other than a tragic origin movie for the joker.

Congratulations to all involved with this film for taking in almost $600 million in just two weeks and still climbing despite the most insidious campaign from so called journalists, critics, blue check markers and wannabes to date. They utterly failed. Here's hoping they can all put on a happy face.

Apollo said:
He wanted to see more of how Arthur came to be unstable and hated the “Wayne” scenes
Click to expand...

Valid points. The stuff with the Waynes added a layer I didn't really see coming. I was kinda afraid they'd go the expected route of making the Joker the Wayne killers, like '89 Batman and the reason he's so obsessed with Batman in the future because of that, like they tend to do in all those WB tv-series like Smallville and Gotham, where Clark and Bruce basically knows and fights all the bad guys before they become Superman and Batman, making it even more unbelievable that they don't know they are those superheroes, but I never imagined they hint at a biological connection between the Joker and the Waynes.


Mr Webber said:
Congratulations to all involved with this film for taking in almost $600 million in just two weeks and still climbing despite the most insidious campaign from so called journalists, critics, blue check markers and wannabes to date. They utterly failed. Here's hoping they can all put on a happy face.
Click to expand...

Well... the irony is that those journalists, critics, blue check markers and wannabes kinda proves the point of the movie right.


So I'm reading many articles on the ending (Joker Ending Explained: What Happened at the End of Joker? - IGN), and was curious everyone's thoughts on what he mean't by, "I just thought of something funny, but you wouldn't get it'. Also, any take on the look of the look of the hospital at the end vs during the rest of the film? The end has a heavenly whiteish glow, vs the grungy 70's looking hospital during the rest of the film. So perhaps it's in his head? Many articles theorize that the last 30 mins are all in Arthurs head as well.

I'm also reading many theorize, that he isn't even the original Joker, that the Joker we know in the Batman films was inspired by Joaquin's joker which would fix the age gap. Or that Joaquin's joker died perhaps around the time of the police car accident and him getting adored by the mob is how he envisioned it as he was passing.

Since the revelation that his girlfriend was just a figment of his imagination, perhaps the whole film was also just in his mind? And what is real what isn't, it's hard to tell now. I definitely need a second viewing as so much of this is left purposefully vague and to the view to interrupt. Just musing...

I went on imdb to look at how much the movie made so far. Decided to also check out the critic reviews. The “Time” critic was brutal, i quote: “aggressive terribleness of his performance” when talking about Joaquin. Couldn’t believe my eyes when i read that.

To my recollection Thomas Wayne was never depicted as a big enemy or had the personality of a total arse. I believe since it was told from the side of the villain they showed what Wayne was like in Arthur's mind and that they never really met in the theater. You can also see the older dude in the bathroom who was washing his hands doesn't even bat an eye at Arthur's very out-of-place street attire as he passes him to leave. I think it was a fabricated moment in Arthur's head we saw.

There's so much open to interpretation it's truly hard to know for sure what did/didn't happen.

Whoever the "real" Joker is that comes in to the picture to face Batman later, this origin story to me feels like the catalyst to who eventually emerges as the big clown prince of crime mastermind.

Joaquin was excellent in this role and was all the things weird and crazy about the Joker. It was far from a feel-good movie, but it was well done.

I liked it a lot. I feel it would have been a great movie as just a character study of an insane man, nevermind the Joker at all. Phoenix is a fantastic actor.

RPF PREMIUM MEMBER
It's ok. It kinda crept along and only started to get good at the last third. I don't see a lot of repeat viewings in my future.


So I'm reading many articles on the ending (Joker Ending Explained: What Happened at the End of Joker? - IGN), and was curious everyone's thoughts on what he mean't by, "I just thought of something funny, but you wouldn't get it'. Also, any take on the look of the look of the hospital at the end vs during the rest of the film? The end has a heavenly whiteish glow, vs the grungy 70's looking hospital during the rest of the film. So perhaps it's in his head? Many articles theorize that the last 30 mins are all in Arthurs head as well.
Click to expand...

Saw a review yesterday that said the two were not the same hospital. I believe he said one was Arkham State Hospital or something to that affect, with the other being Arkham Asylum. Can anyone confirm this?

Still unsure what to feel about it, but keep thinking about it. I have to admit I would love to see more DC movies done this way. And I like imaging what a Batman and even Superman would be like in this kind of realistic setting. I saw a reviewer on youtube talking about how the setting changes why Bruce Wayne would dress up as Batman - sorry, I can't remember the youtuber's handle, so cannot credit them. But the thought was that because the criminals in this setting run away from law enforcement, run away from authority, you would kinda need an extraordinary player - a lightning pole - to grab their attention in order to engage and capture them. Batman wouldn't dress up to strike fear into the underworld, but to bring them out, attract them, like a bug lamp. I always wondered how a Batman character would work in a realistic setting and this is definitely the most believable way for him to function. And it would push Batman into the detective mode more, and using the batman persona to draw out the criminals.

Superman would work in this kind of setting too... and the very thing of people putting him up as a savior would work better, and the strain it could take on him having to ignore so many cries for help all the time and deciding who to help and the lazy overdependence on Superman doing everything - putting the burden on him for things people should be able to do on their own and ultimately blame him when he fails to live up to such expectations and demands. The pressure that would make any normal man buckle, but he still keeps helping when and where he can. THAT'S how you do Superman in a realistic setting. He can't save everybody. But he still tries to save who he can, inspire people... and don't jump over fuel trucks thrown at him that explode behind him or smash through buildings without care and endanger civilians.

What Zack Snyder failed to do in his "realistic" stories was to actually make them realistic. He made them bizarre and unrealistic and over the top and Michael Bayish. The Joker movie IS is the kind of realism that would have suited the DC movies, if they wanted to make them more "realistic". But frankly, I'm so tired of Snyder's take on realism, because his take on "realitic" just means stupid, unlikeable heroes who doesn't do anything heroic, and has inconsistent powers that are there or taken away whenever the story requires it, because he has an end result in mind that he wants no matter what, regardless of the characters inhabiting the story. The same kind of shoddy, cliche kind of story-telling we see in the Jurassic World series.

RPF PREMIUM MEMBER
There’s no vote options for “I still haven’t had a chance to see this movie yet, but I’m already sick of the Joker memes on the internet”

RPF PREMIUM MEMBER
Well I saw it again with my sister. Still enjoyable I guess. It went by a lot faster. I also noticed they goofed when he was dancing on the stairs. He threw his cigarette away and then the next scene he was smoking again. Lol!

I know a bit late seeing Joker , but here is my thoughts on the film .
Enjoyed watching a different perspective on Joker ,how he came to be etc.
The director had a vision of the film and shared it with actor and everyone else who was involved in the making, and from this Joker was the film that came from this.
That is what is was a vision, different perspective ,another way at looking at Joker from director and actor ,which was great cannot see what is wrong with that, if we only looked at one version of a topic from one director and actor how narrow of a view we would have .
This is not a remake nor was it said Batman would be in it or even that a sequel would come from this,even though this maybe the case.
For myself I enjoyed it.
There we go my view of the film .

Got to see Joker yesterday. Liked it a lot. I thought Joaquin's performance was excellent as always. The guy is an amazing actor.
I like the homage to the gritty 1970s NYC era. Thought they captured that pretty well. A minor grip was I thought a few fleshed out secondary characters would have helped fill out the landscape and add depth to the story. I thought the casting of very good character actors like Glenn Fleshler, Marc Maron and Shea Whigham were very wasted.

One Billion and still climbing with no China release, an R rating and a warning from the media that you may actually be killed if you go to see it. Bravo.

Here's a good example of why there is a massive swing toward independent content creators and a growing disdain of the shill media. 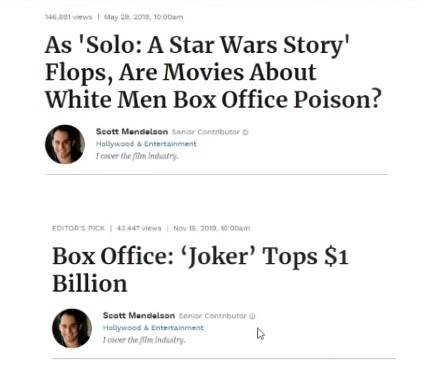 You also know that Disney must be scratching their collective heads. They cannot answer "Joker" with anything.

Does DC's the Joker character have superhuman powers?
2

Leto back as Joker?
2

'Psycho Goreman' Is released in about 1 hour and 12 minutes. .. Have a feeling there'll be some nice props in this for horror fans.