Help- Boring a large diameter hole into PLA print- Is it doable?

RPF PREMIUM MEMBER
So I am working on a blaster, and need to make the barrel portion removable, but in such a way I won't lose structural support.

The basic idea is that I would bore a hole through the main body of the PLA print piece, and then embed a PVC pipe through the length of the body, leaving a section also exposed to slide the main barrel over top and secure it. The issue though, is that this means that I need to figure how to create a hole both deep enough and that doesn't damage the print. IIRC, this is 80% infill

I was thinking of looking into some machining shops in the area to do this as it requires precision, but those experienced, what do you think? This is a pretty big print, the overall length of the piece is 4'. 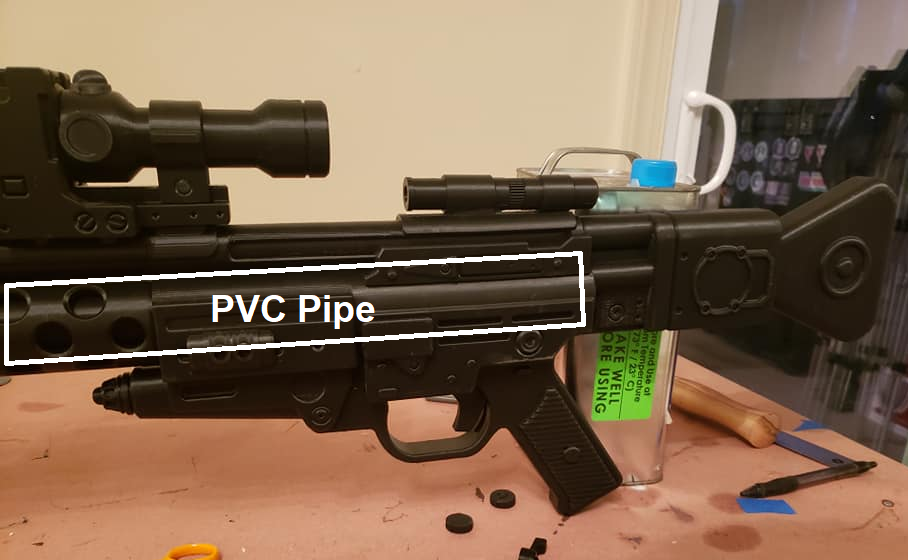 If you have a drill press or steady hands, use an appropriately sized Forestner bit. It's like a combination of a hole saw and a spade bit. It should cut the PLA print better than a twist bit. The PVC pipe won't have to be too big to do what you want. 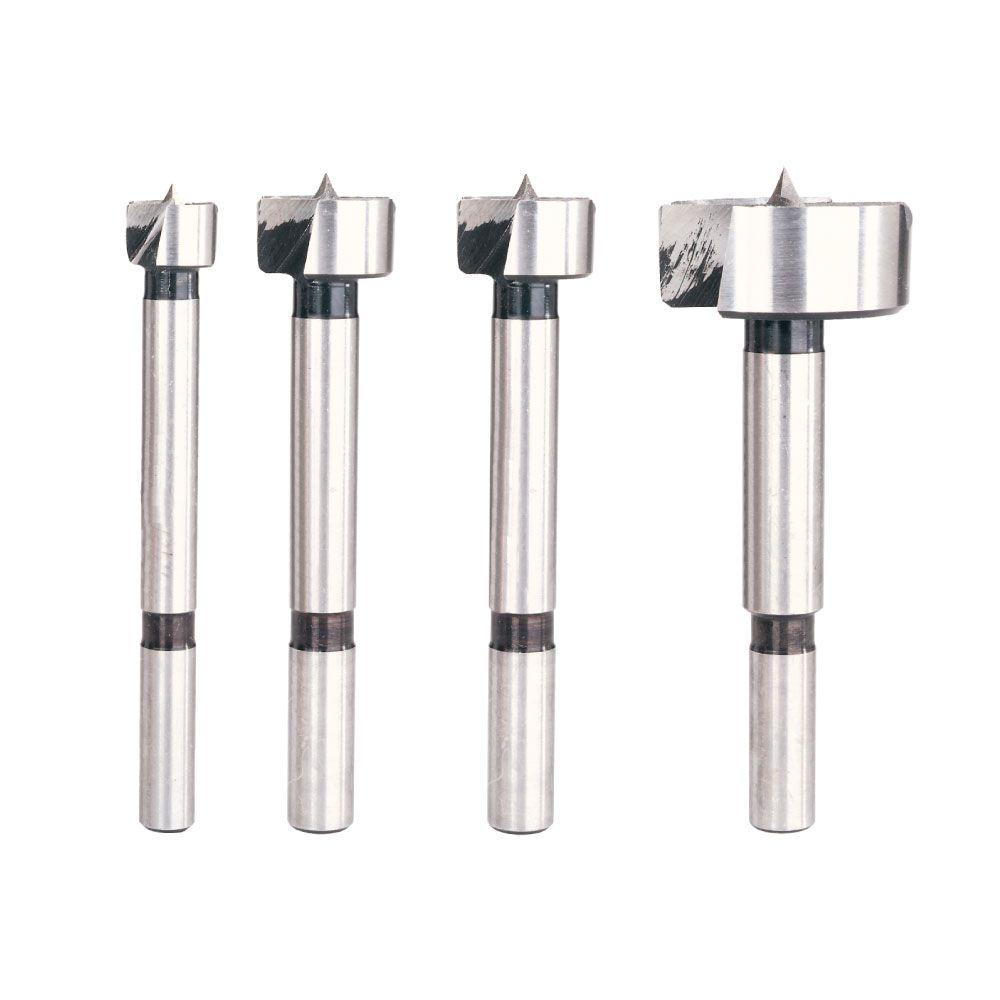 I would recommend against it. Machinists are used to drilling through all kinds of material, but rarely drill through something with a skin and an 80 percent infill. PLA tends to melt when drilling (it doesn't take much to melt), and when the drill edge catches a piece it may pull and start wrapping around the bit like a spool. The part would have to be clamped so the bit won't drift but that might not stop the print from imploding by wrecking the internal structure. I have had very little luck in modifying PLA printed parts using a drill, unless it was 100 percent infill. The only time I did have some luck is when I made holes in parts hat was designed to be joined together with a brass tube, and there was only support in the hole. Even then it gets dangerous.

Its best to redesign the STL and reprint in my opinion.

RPF PREMIUM MEMBER
PLA is very hard and breaks easily but also has a low melting temperature. Gets soft at 60-70C. Boring can heat up things and melt the PLA. I would remodel and print without the part you want to remove. PETG is much easier to work with.

RPF PREMIUM MEMBER
For the most part I agree. Remodel the part with the bore... but you may need to clean the bore with a conventional drill bit. Printed holes/bores are not precises. Or you could make the bore a little oversized and fill between the PVC and the part with epoxy. I would also print the new piece with 100% fill.

Drilling into 3D prints can be tricky, because of the infill pattern, the drill might seek it's way in-between the infill, and mess up the location where you want your hole,
if the outer wall thickness of the print is too thin, it might crack and not leave a neat clean hole.
PLA tends to become soft with temperatures over 35C, and can cause clogs on the drill, so lots of cooling.
M

If I were to bore it I'd use a hole saw or core drill and take it very gently.

However, it may be easier to cut the print in half and remove the support with a Dremel or something.

Get a heating rod and melt the plastic. See videos on Youtube of people using 3D pens to create sculptures - they use one to smooth the print and cut it apart.

Drilling will rip the print and will never look good.

RPF PREMIUM MEMBER
Thanks everyone for the responses. I did a lot of looking into this on top of everyone's responses, and yea, the plastic just won't withstand it. To add, while I thought he said it was 80%, he confirmed it was only 30% infill, which would have made it even more difficult. If I had more time for this project, I'd have considered having the main-body re-worked to already incorporate a space for a PVC pipe.

Adding even further is the fact that my excursion to home depot and Lowes proved that there was no PVC tube that was of proper size to work with my intended modification. That being said, I will likely be making this a one piece prop, however, there may be an alternative solution to still keep the barrel removable.

To keep the 2 separate halves of the heat shroud together, I put holes lined up with each other that peg into place 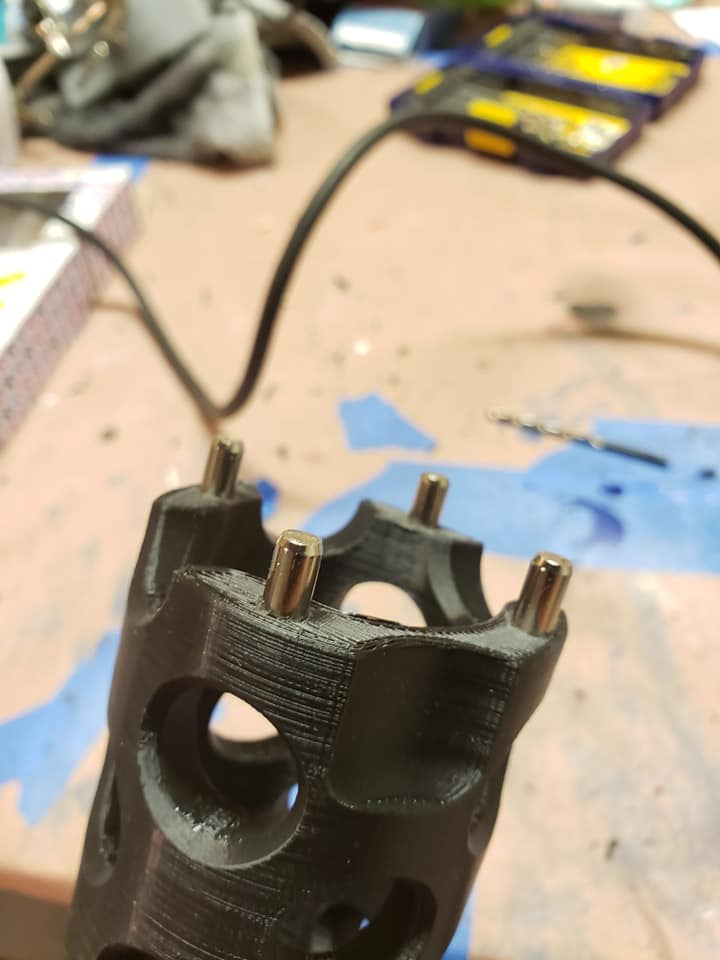 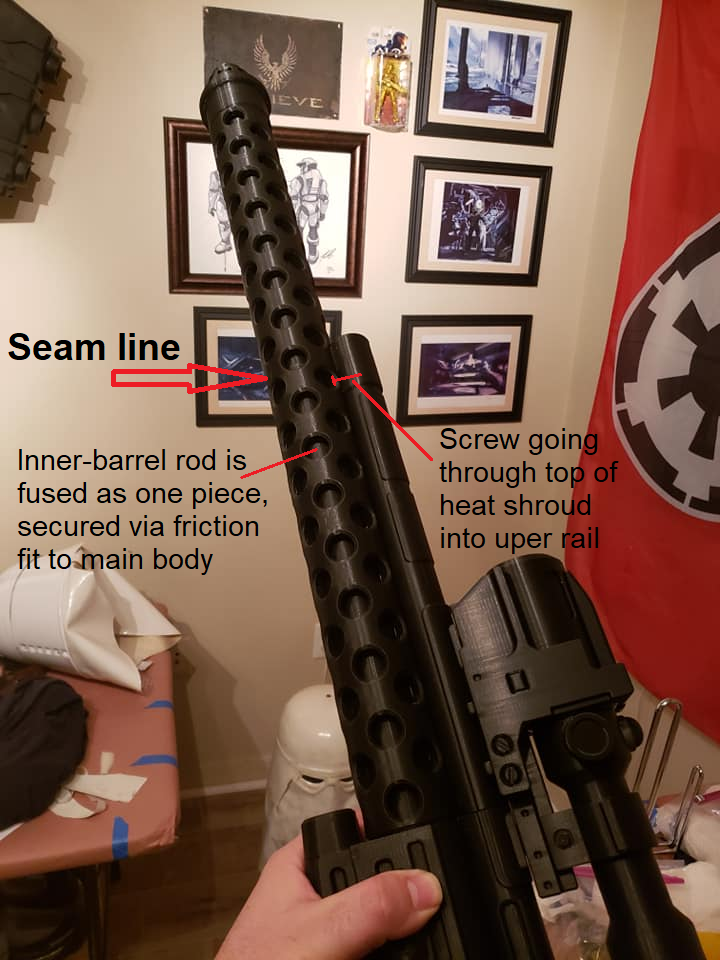 So even without gluing anything other than the inner barrel rod, this is now very secure, and feels good.