Very nice. If you haven't seen it already, there's a 3 part series (and a just released compilation) about the Cerratosaurus by a YouTuber going by Edge.

Riceball said:
Very nice. If you haven't seen it already, there's a 3 part series (and a just released compilation) about the Cerratosaurus by a YouTuber going by Edge.
Click to expand...

Thanks, I think there's an Edge following me on Twitter who makes Youtube dino docs, might be the same. I'll check it out when I've got a min,

A couple of months ago I dragged an old project from backup. I had the animated Allosaurus skeleton on a real-time 3D website iin 2017 but I had to close my account when someone alerted me that people were stealing my work.

Anyway I brought it back as a Youtube video, it was a neat way to make a public record of an old project.

There's a few things wrong with it and if I ever re-visit it there'd have to be a few revisions. I'd love to build a real motorised version of the walking skeleton, pretty sure it's do-able if I ever found the time to work it out.

Been away from arty things for a while but I hope to get back on the cerato soon. Couple of sketches- 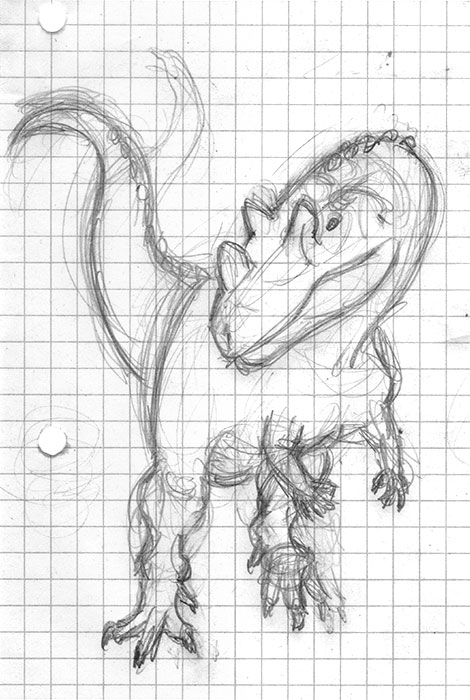 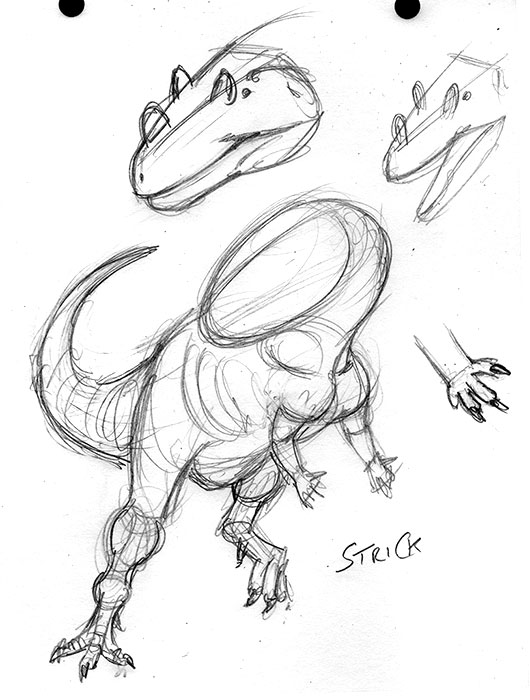 Great job on the Allo. Your work really puts into perspective just how large its arms were and just how small they were on Tyrannosaurs by comparison. I've always known that they had fairly large arms but I've always been more of a Tyrannosaur fan so I have kind of forgotten about Allosaurs except that they existed and were the Tyrannosaurs of the Jurassic.

One of these days I need to buy one of your prints. I've really liked everything that you've posted here. But it's a real toss up on what I'd get. As I said, I'm a big T. rex buff, but I already have a nice T. rex toy and a 2D skull that I cut out from a sheet of brass ages ago in college so I'd probably get either the Mosasaur or the Pterosaur, or maybe wait for your Ceratosaur just for something a little different, something that's not a T. rex.

Haven't had many opportunities to do arty stuff this year, too much other stuff to do. Still need a new desktop PC at some point but I've had my scanner/printer in my old laptop so I managed to scan this the other day. 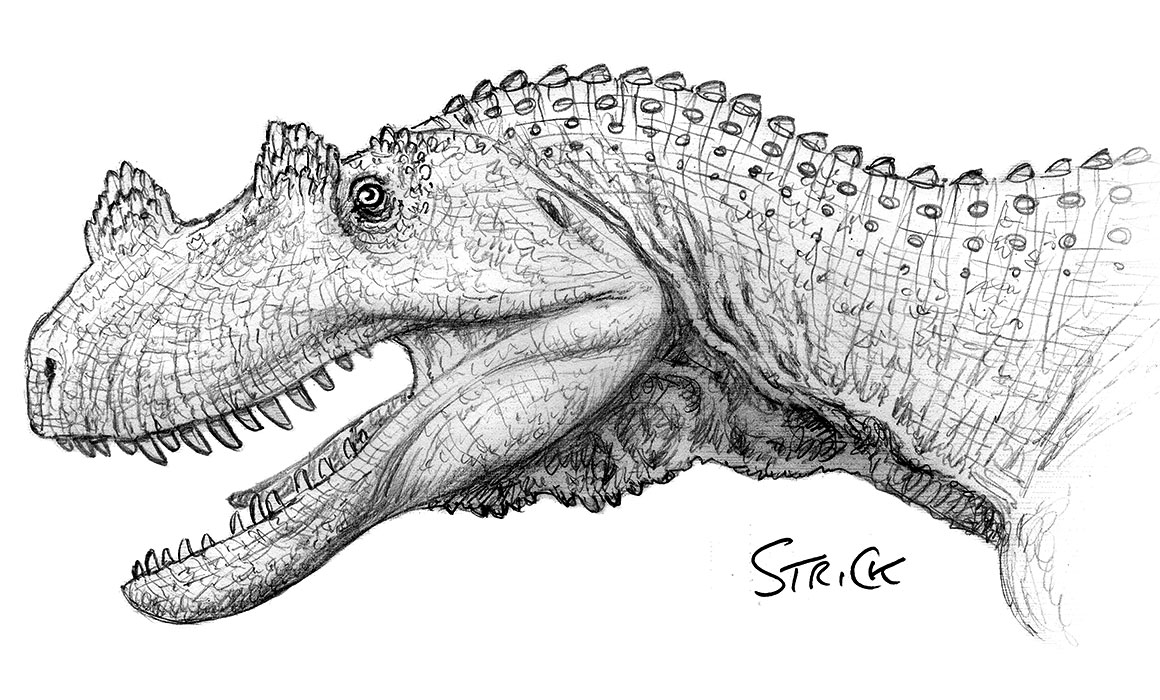 In hindsight I'm not sure if I like Ceratosaurus with this spiky/crusty look, might try something different.

Lovely. Keep coming back to this. Have you seen the dinosauria series on youtube?

Too Much Garlic said:
Lovely. Keep coming back to this. Have you seen the dinosauria series on youtube?
Click to expand...

Thanks! Yes it's really good.

Decided to make another skull for 3D print. Mostly based on specimen MWC 1 with parts adapted from other Ceratosaurus fossils. I normally create these orthographic views traditionally with pencil and tracing paper, this time I drew it entirely digitally in Krita, traced over digitally assembled reference.

In the next few weeks I'm hoping to put a new PC together so I can have a go at the Blender 2.8/2.9 series. With my current hardware I'm still mostly bound to v2.79 but that will be fine for making this model. 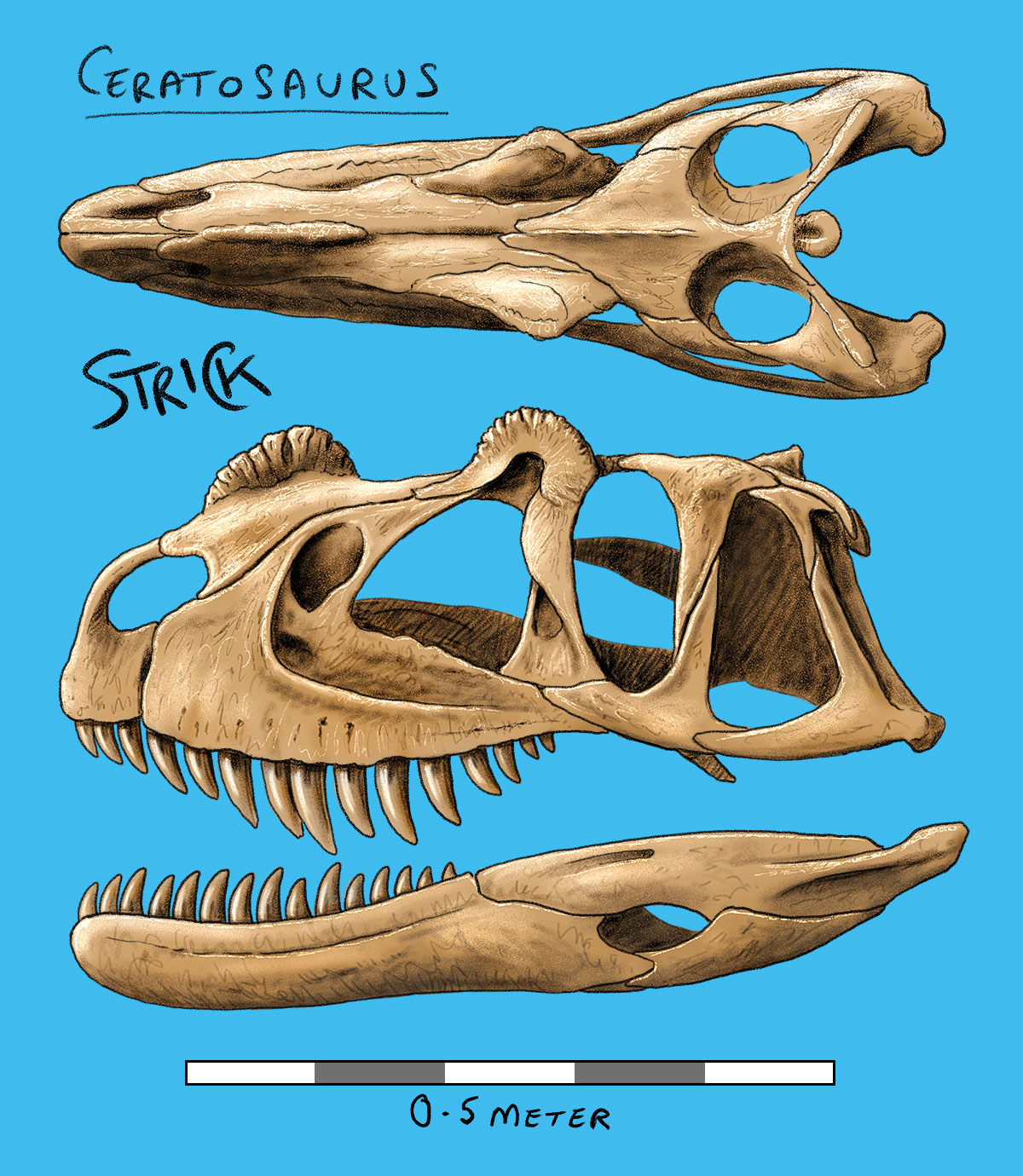 This one's been brooding in the background for too long, time to get started on the 3D model.
I'll put a few process pics up but not too many 'cause it slows me down. If anyone's interested in my methods there's a few threads on the Dinotoy Forum.

Used Krita's color-to-alpha filter to make the ortho drawing transparent for placement in Blender as a template. 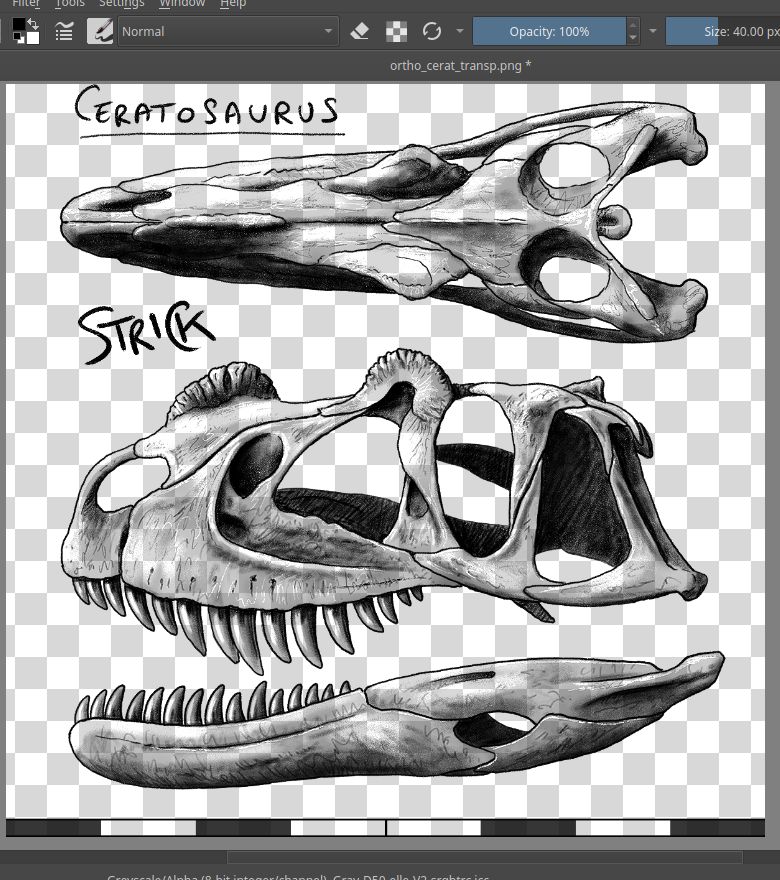 To make the skull I'm going to employ the same 3-step process I used for the Mosasaurus and the Styracosaurus, it's a bit of an odd approach but I like it.
The original orthographic drawing had a 0.5 meter scalebar but I've changed it to 0.8 meter so it encloses the length of the skull. This makes it easy to set up the template images in Blender which lets you set the width of the image numerically. 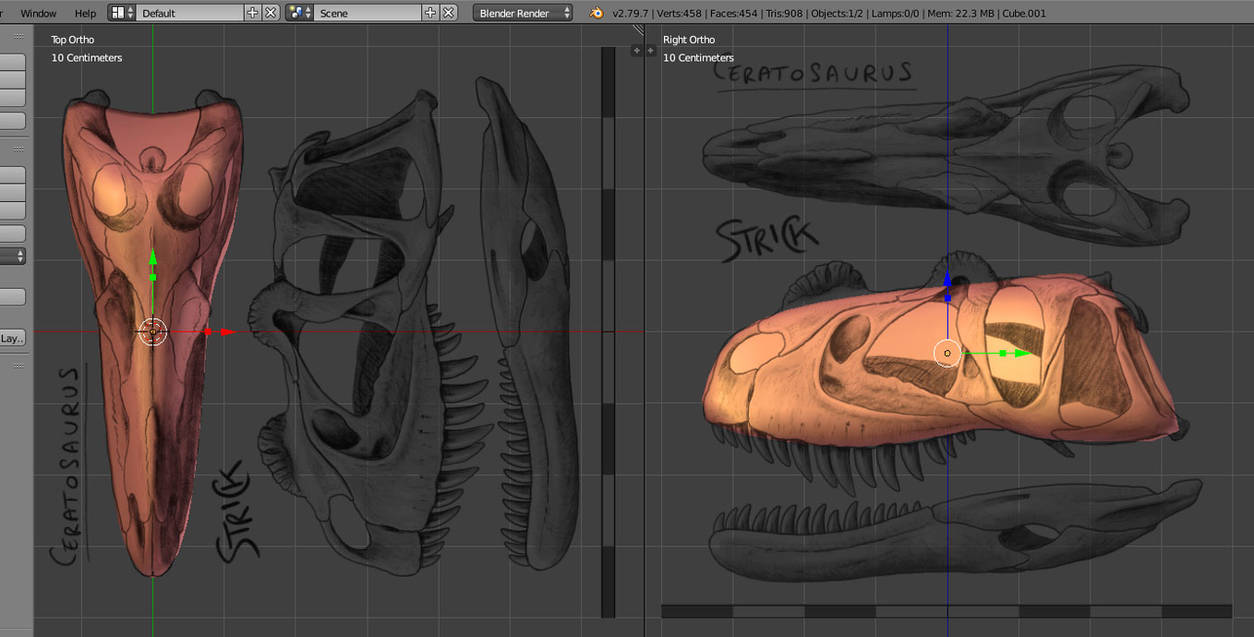 Starting the scaffold by approximating the form with subdivision surfaces, this eliminates a lot of messing about push/pulling a cube or sphere into shape.

Some sculpt brush, a lot of push/pull with the grab tool and a couple of remeshes later
Think I've got the shape roughly where I want it 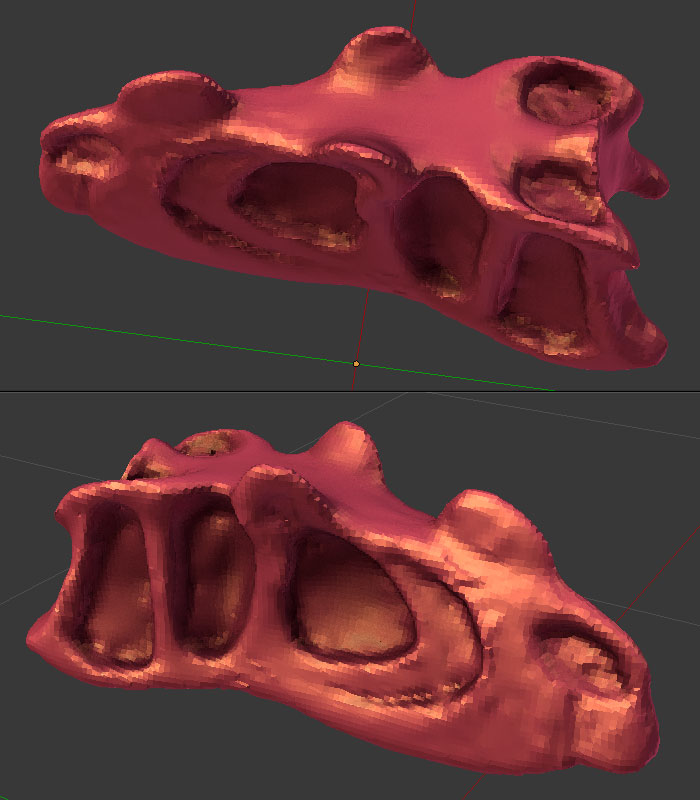 Might as well keep pushing this forward while I'm in the mood. Theropod teeth in Blender, a relaxing break from making the cranium. Apart from the profile shape the main thing is to make sure they are narrow.

The solidify modifier is my quick and easy way to add thickness to the polygon surface. Once it's applied I'll need to make a few adjustments with respect to inner structures. Also form a cranium roof.

Viewed separately, the palette and brain-case section (green) looks like some kind of alien slug. Just need to get it joined to the cranium to complete the base mesh. 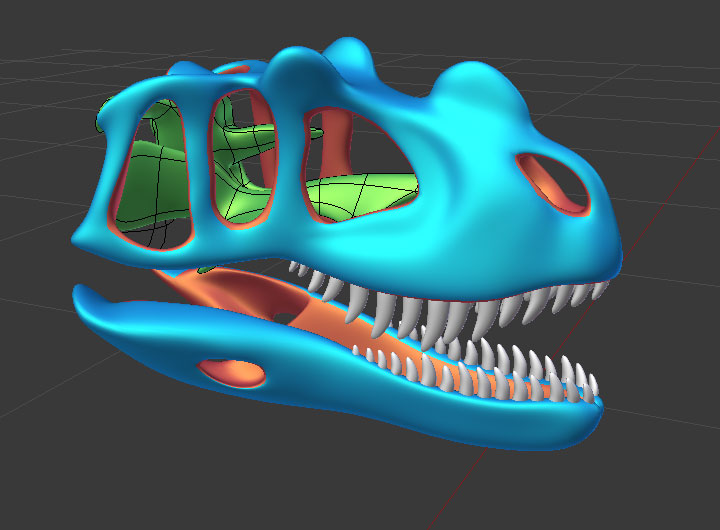 The orange rings are a place holder for the jaw's pivot point. 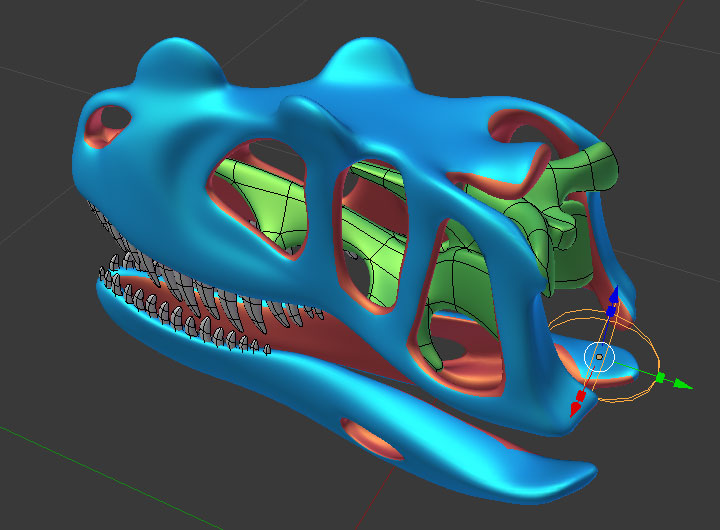 I like how this is progressing and that you show the process you utilize. Very cool.

This is how the connected mesh came out 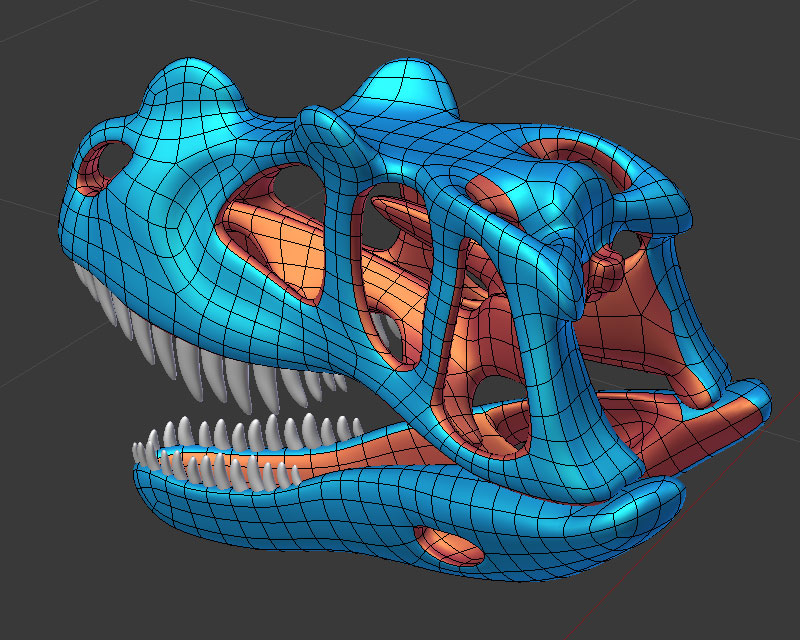 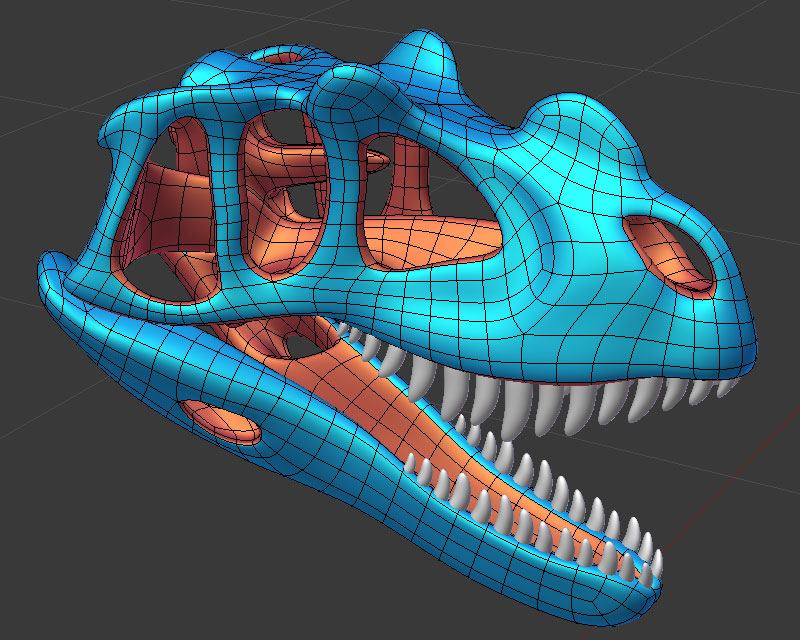 Too much happening last couple of weeks to do much with this but I managed to get back on it Wednesday night. Reckon I'm done with the sculpting part. 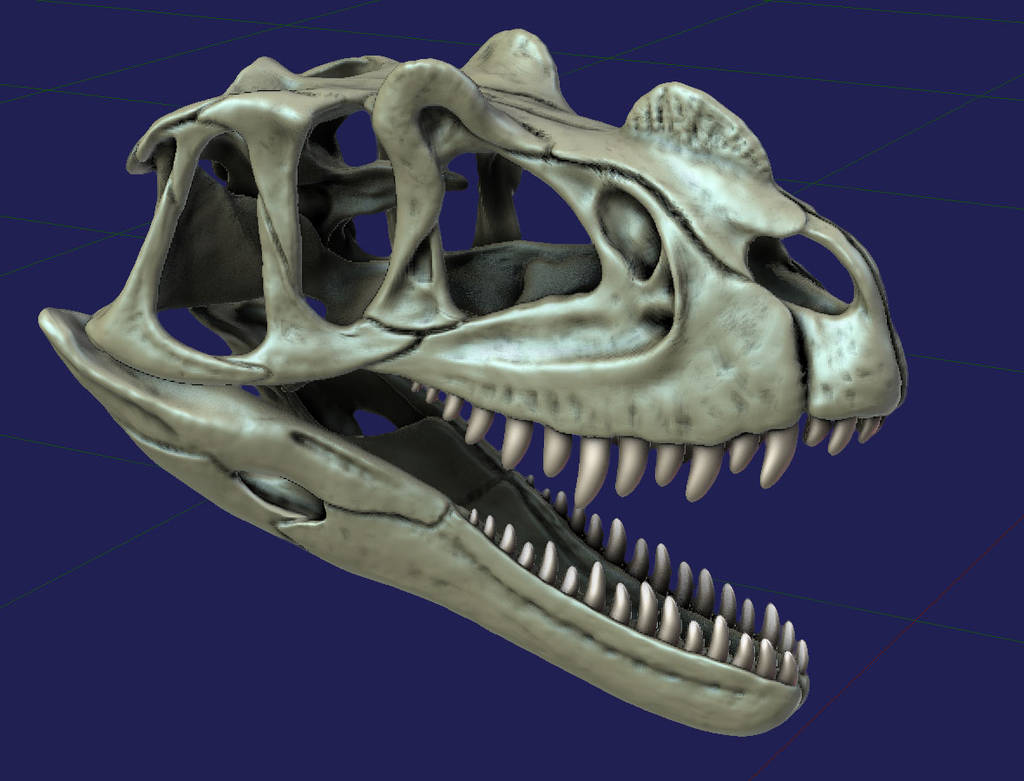 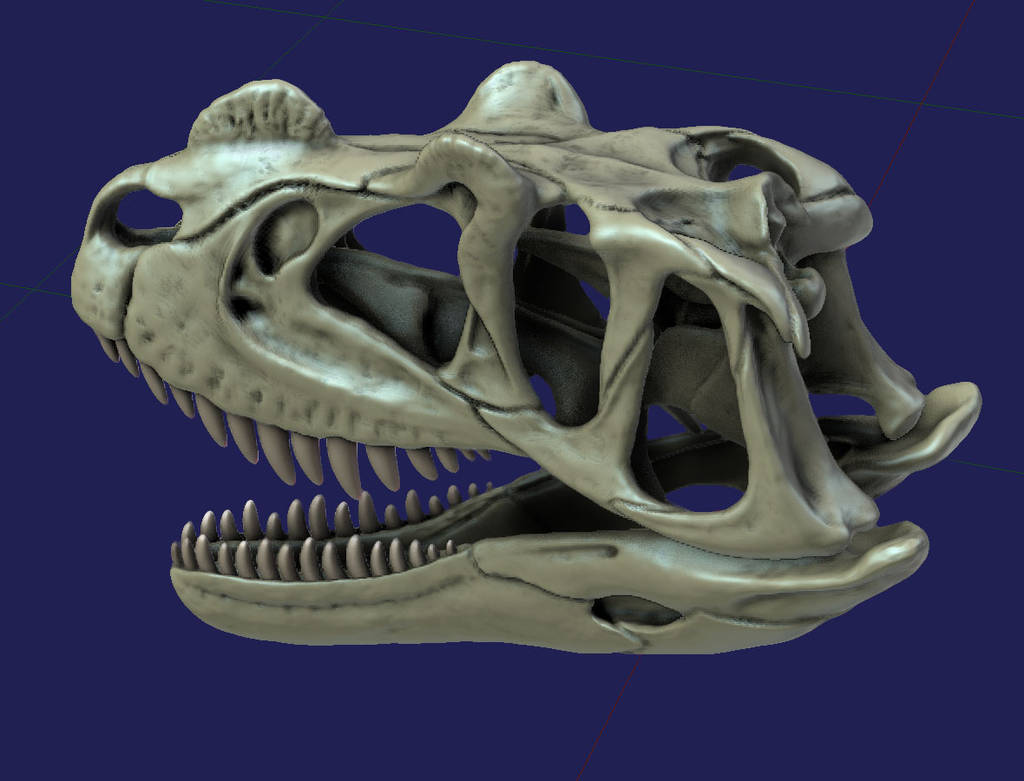 Now for the next stage which is making ready for 3D print, so I'll need to make-

How do you make a poly reduced version without losing any of that wonderful detail?

Too Much Garlic said:
How do you make a poly reduced version without losing any of that wonderful detail?
Click to expand...

Blender's decimate modifier can get a couple of million polys down to a few hundred thousand without mangling the details. I don't go too fine with details anyway as they disappear in the print. 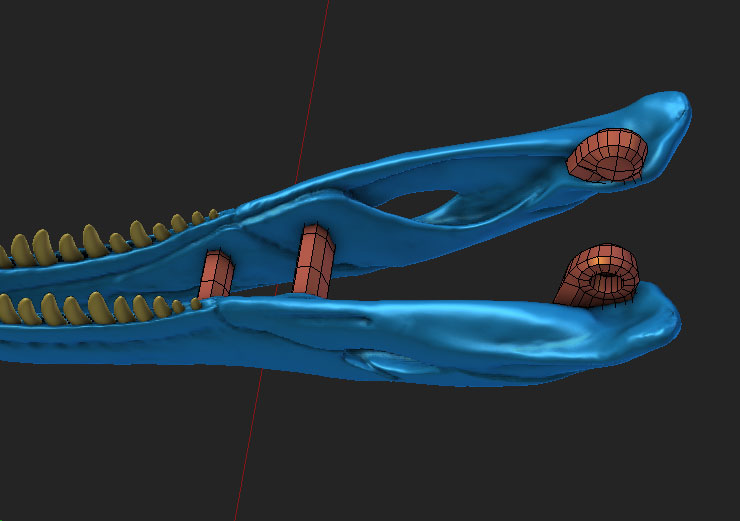 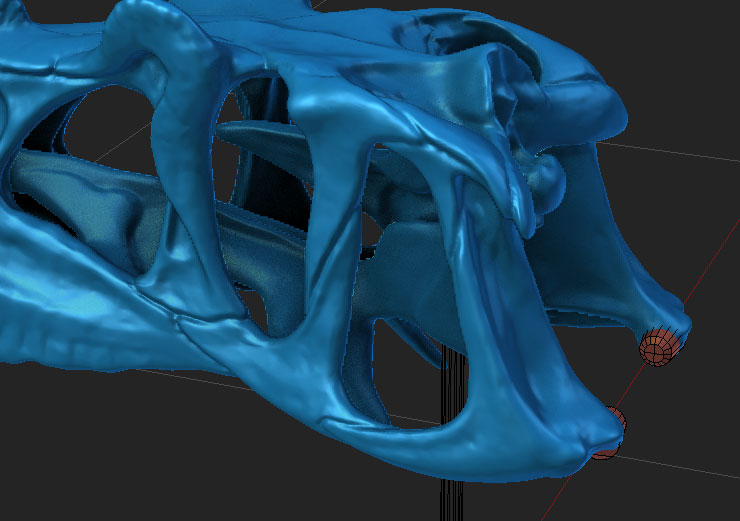 Oooh... thanks mate. I'll have to try out that setting as it sometimes takes forever to work on some of the really large models I have. 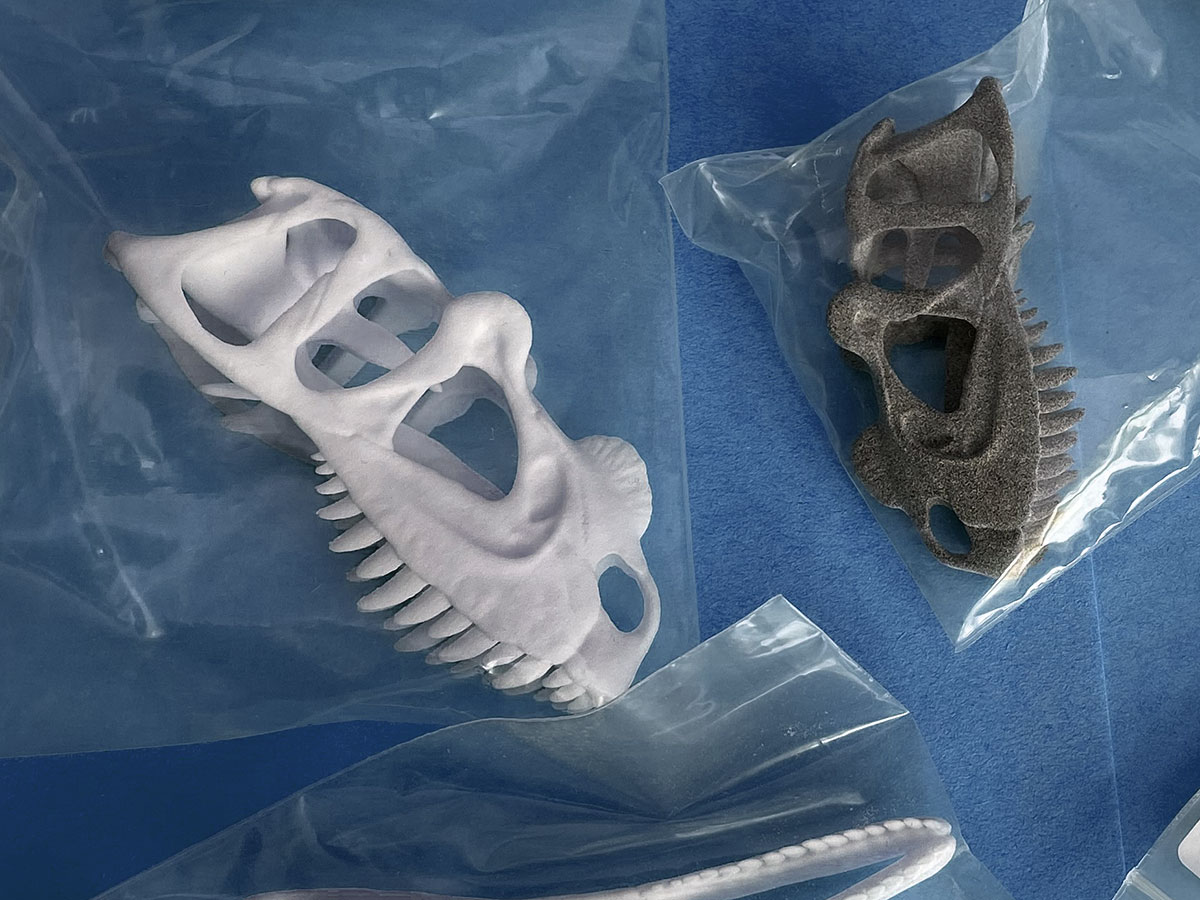 Also got started on my new PC build. It's a fairlymodest spec, a 6 core AMD Ryzen 5 APU with 16Gb Ram.
The old mechanical hard drive is temporary, got an M2 drive coming this weekend but I want to test this now.

It should mean I can finally move on from Blender 2.79 and onto the newer versions. Might add a proper GPU later.
The case was donated by a friend. I had to replace my previous desk and my old Antec 300 case is too tall for the new one. Might keep the case if the cooling is adequate. 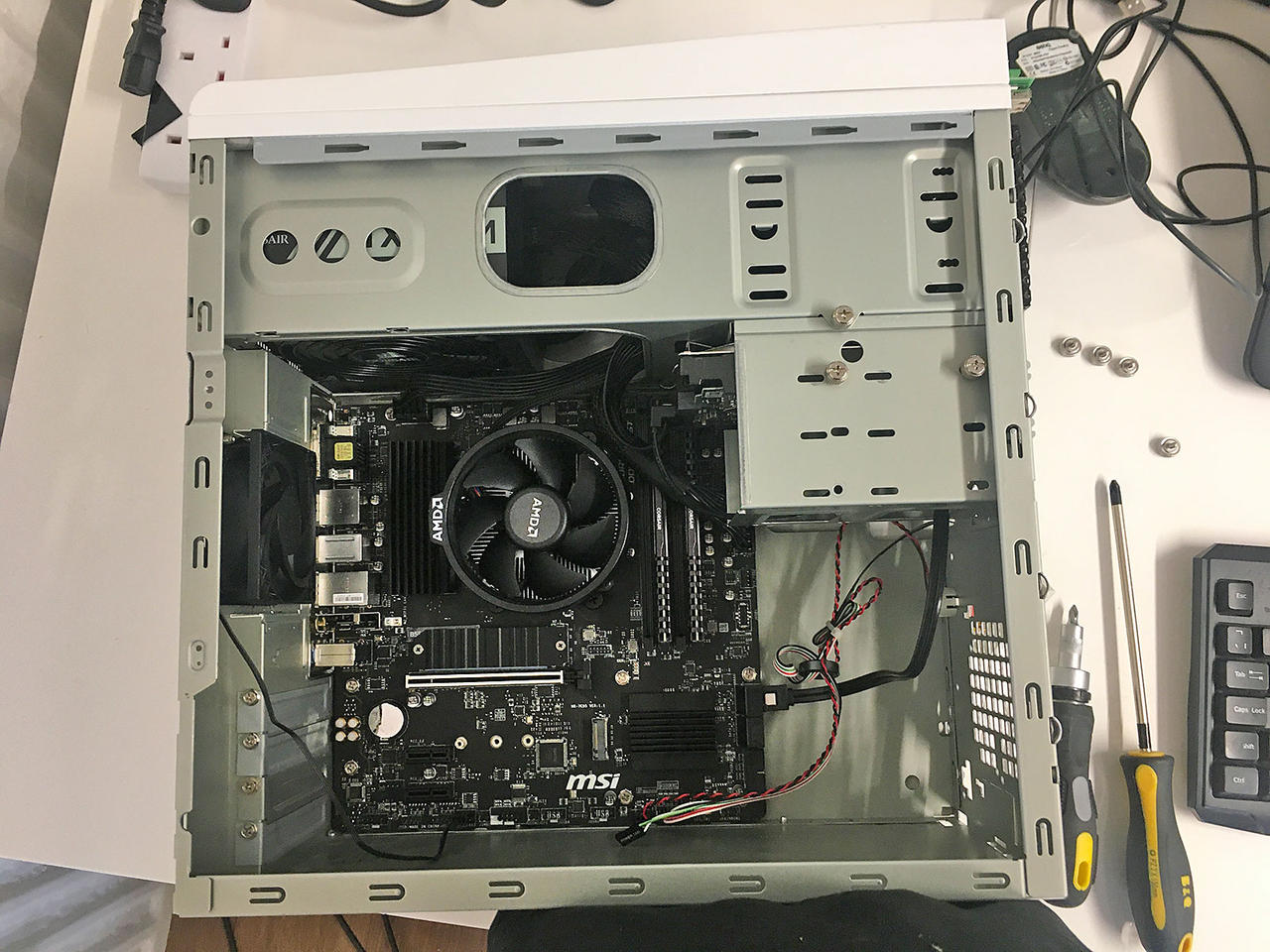 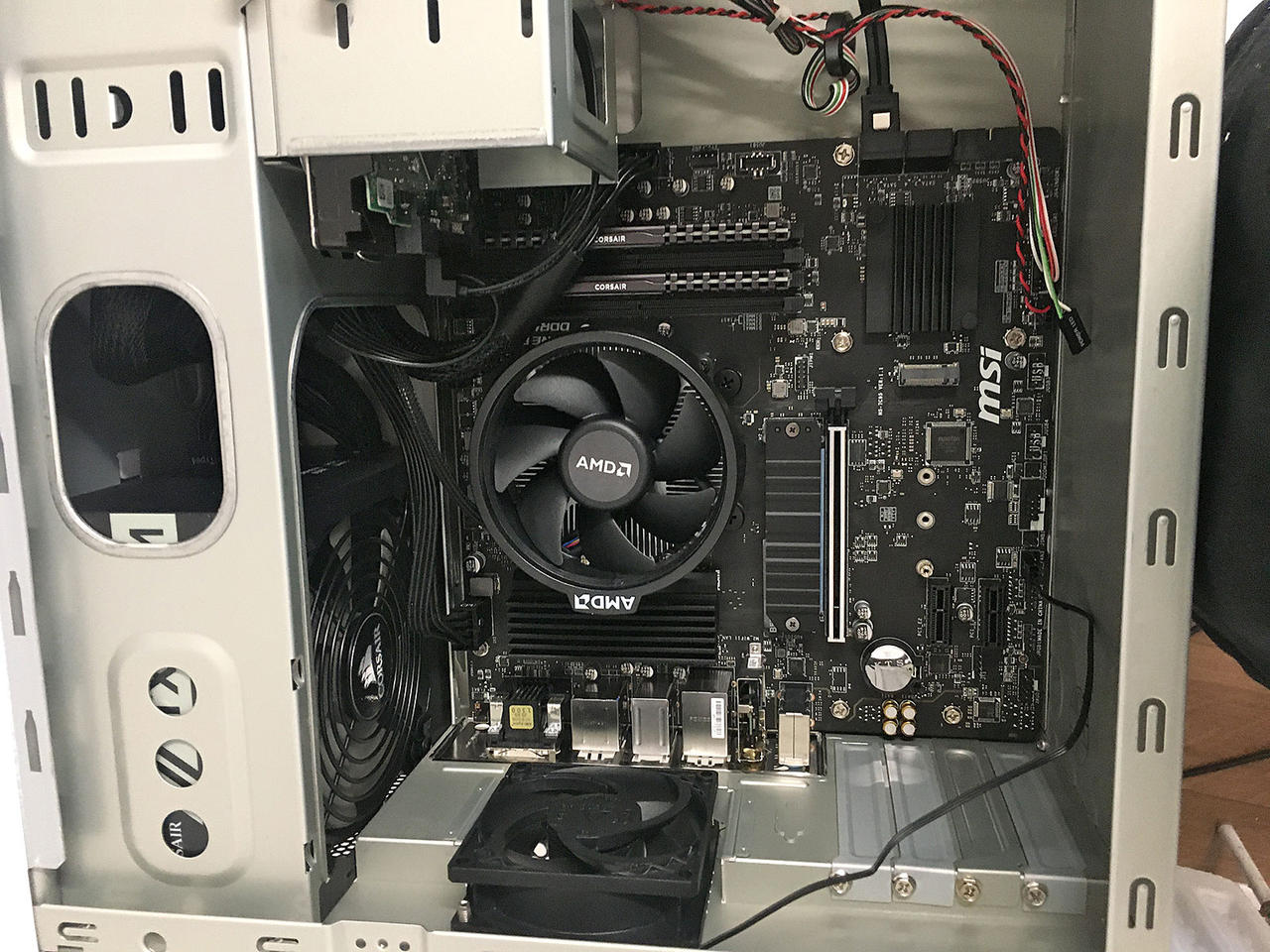 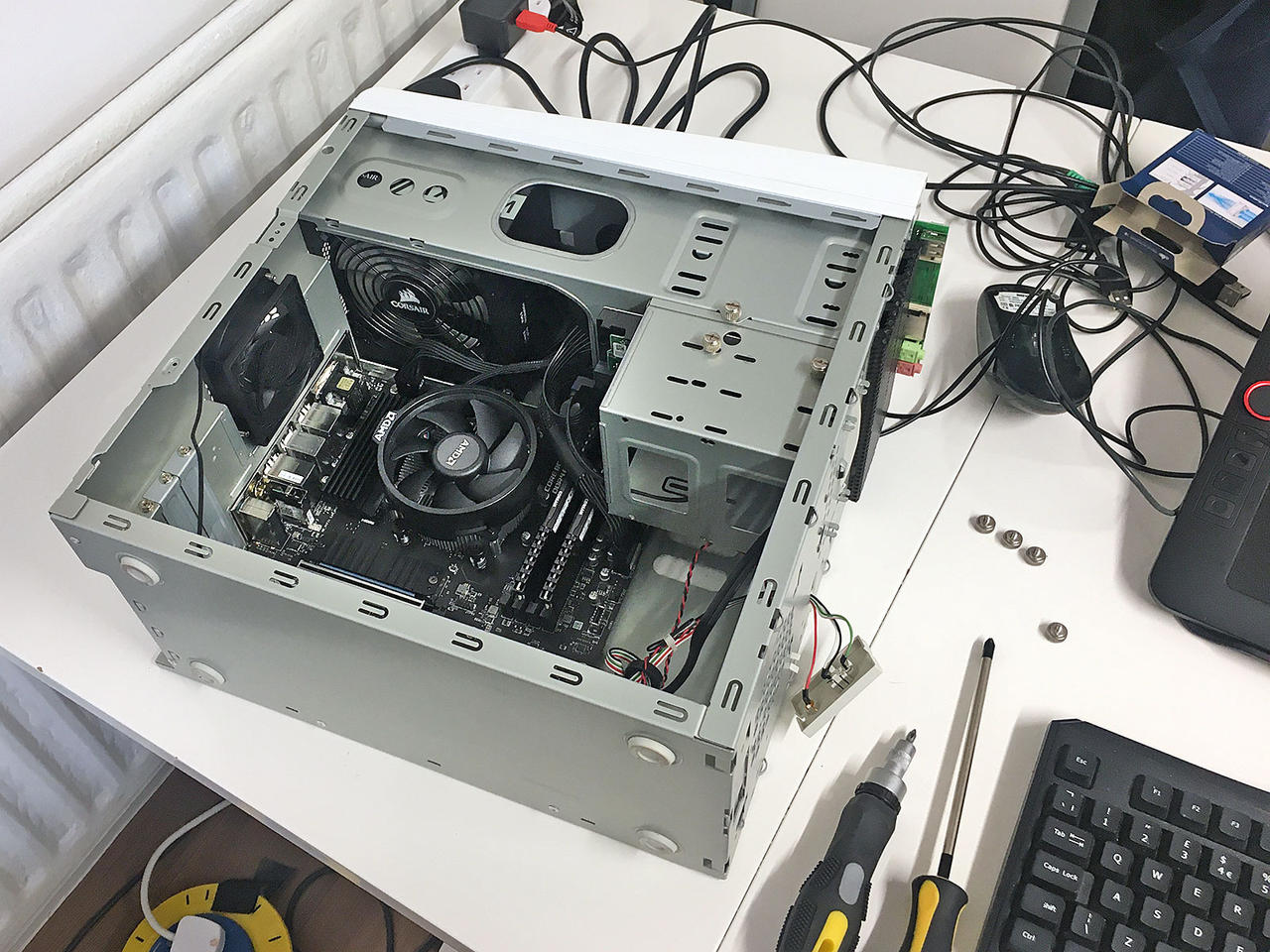 A few more photos before I paint these, jaw articulation seems to work well. Both prints are nylon material, the white one is Selective laser sintering process and The grey is multi jet fusion. 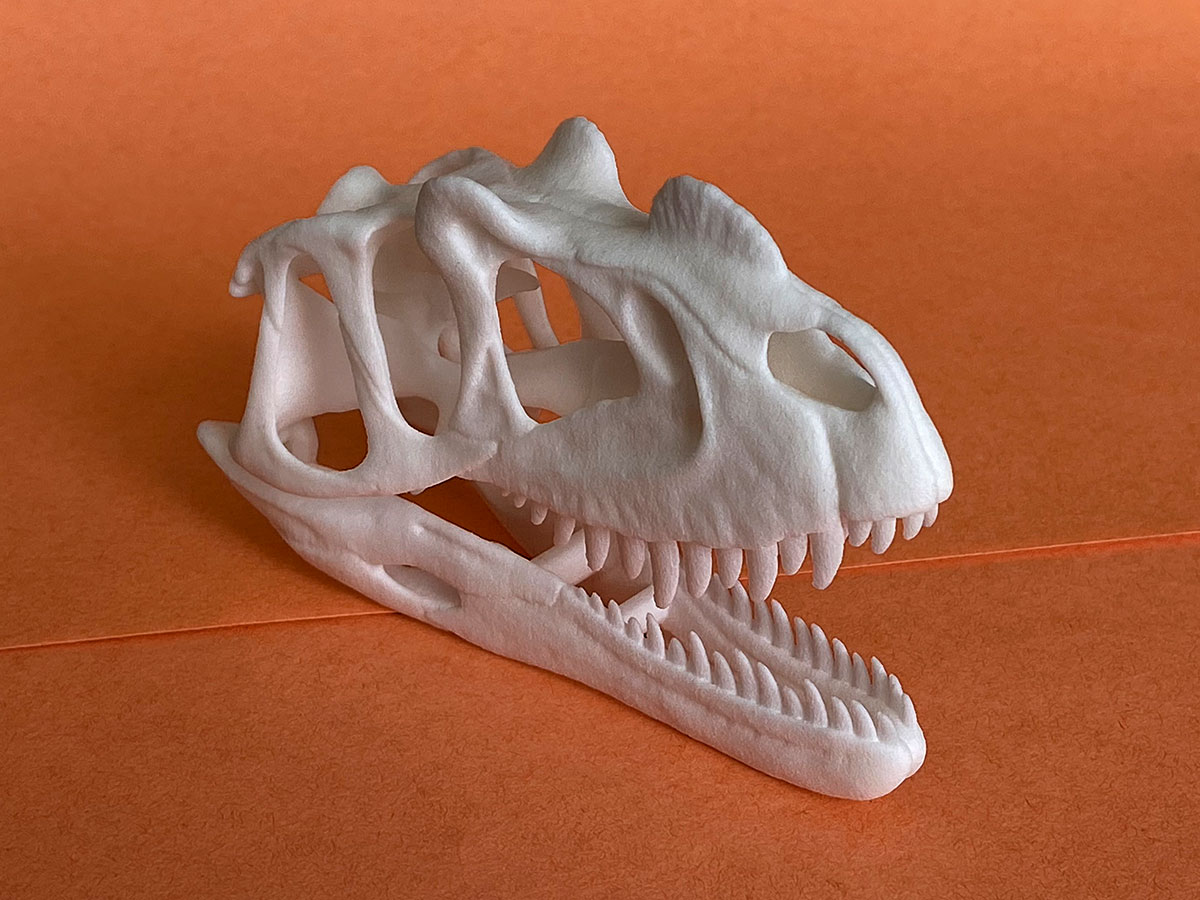 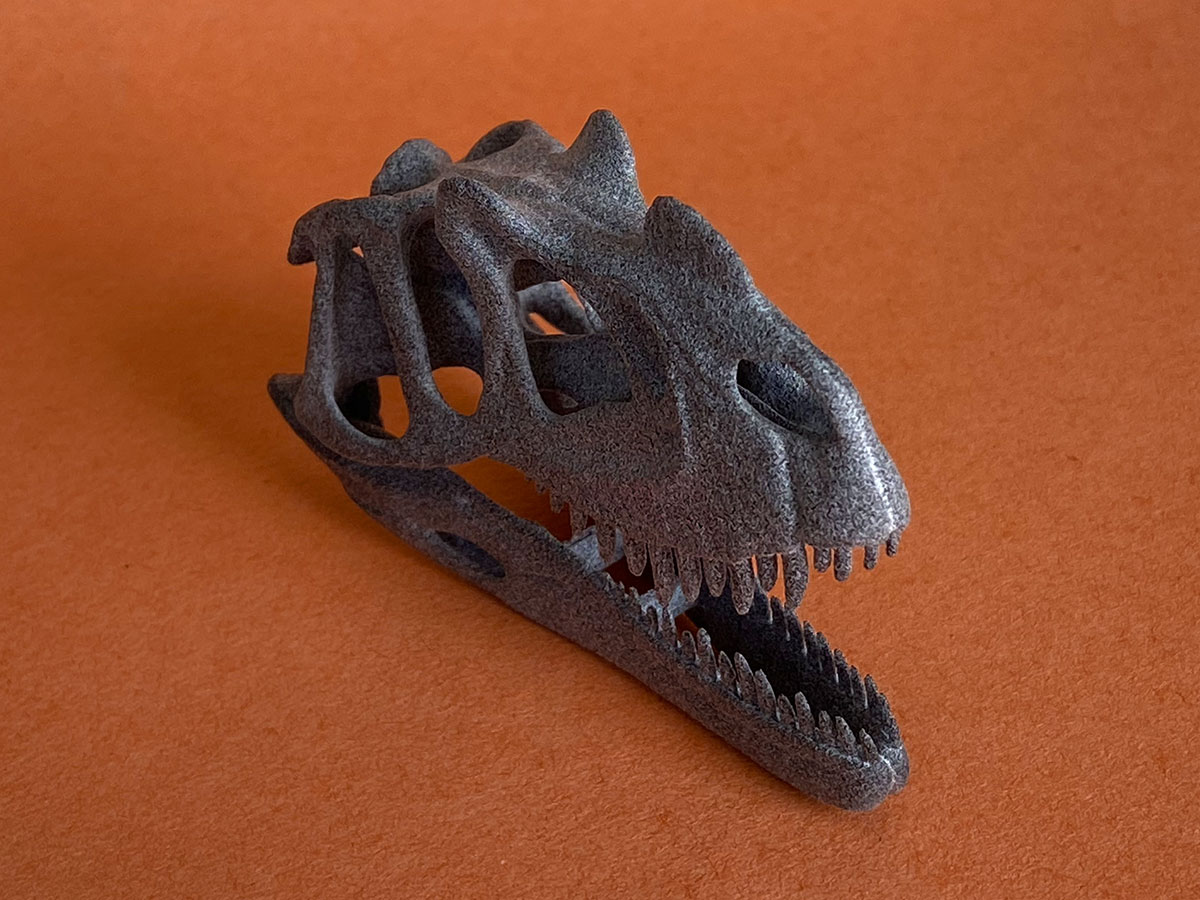 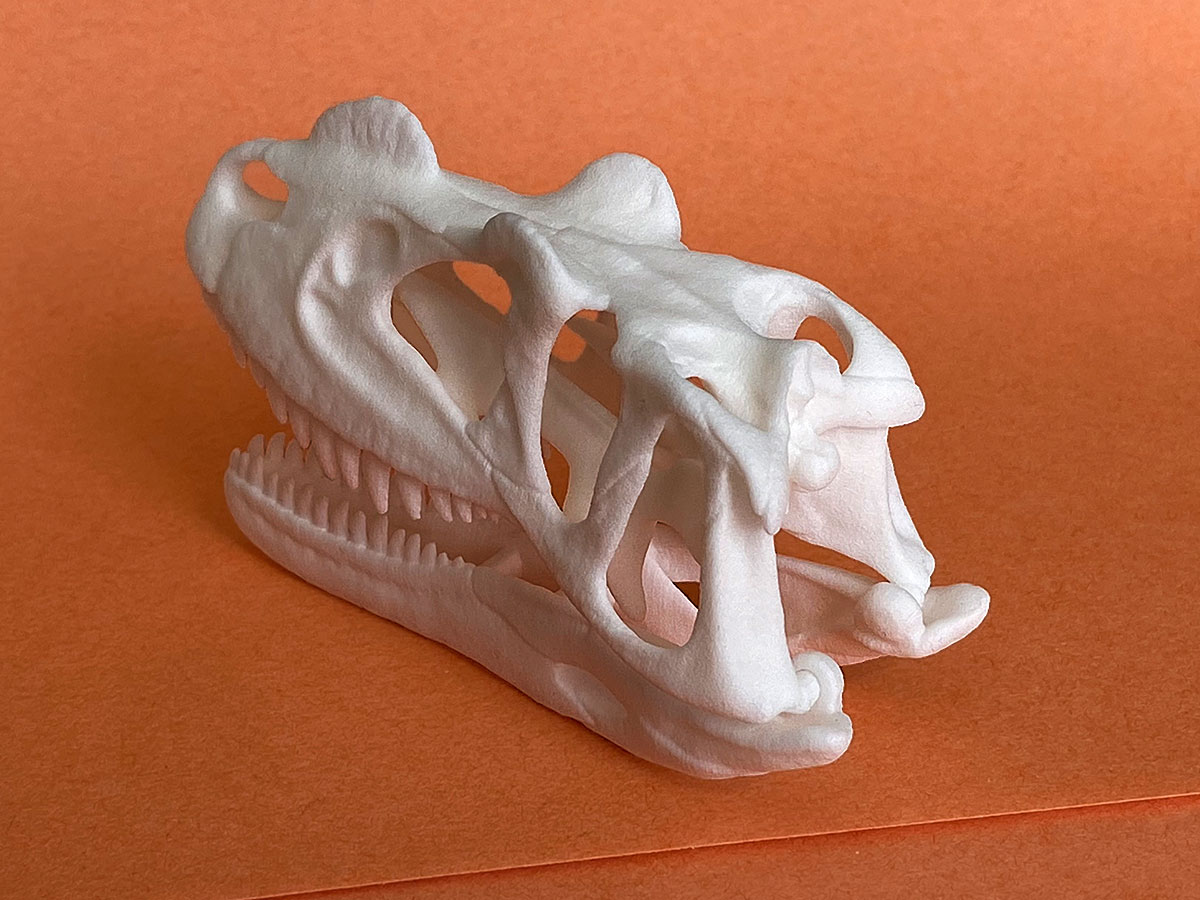 Rick and Morty Ship, for funko 5in figure release