I own a couple of Saberforge sabers with spark, which I am quite satisfied with. However I keep reading how much better other sabersmiths are. I don't NEED another saber, but I'm tempted to get either an entry level Vader's Vault, LDM or Genesis Customs saber or a saber from another maker in the $300-550 range (which is the same price as a saberforge). I keep reading how inferior saberforge sabers are in comparison, and I don't want to miss out on something better

Outside of the customer service electronics issues I've read about in the past (which have not been an issue for me), it's hard to tell if the saberforges are actually a step down or if it's just people saying they're not as good just because everybody else on the web is saying so. And how every different forum seems to be catered towards promoting their own saber makers which makes it somewhat hard to gain a neutral opinion. Of course forum politics obfuscate things.


So my question is, to those who own both saberforge and another custom saber maker's lightsabers, is there a significant enough difference for me to plop down $300-550? (obviously I would assume the $1.5k+ sabers are much nicer). And which ones of the other saber makers would you consider are better?

Gone but not forgotten.
Welcome to the world of saber politics!

Without being biased I will say all of the "name brand" sabersmiths do good work. In the price range your looking at, the most you will probably get is a basic machined aluminum tube with a fancy emitter and an entry level soundboard. My suggestion is to email each Smith with your wants and see what they can do for you. The ones you find on FX Sabers and the Imperial Royal Arms will give you the most bang for your buck. It just depends on how much bang you want.

There are many saber smiths out there, all with different levels of machining skill and electronics expertise. You will have to pay more money for the more intricately machined hilts and electronics installs. Higher end sound board installs, crystal chambers, and lots of blinky lights = more money. If you want to compare sabers from several different smiths, all in the same price range you're more likely to get a comparison of what they offer for that price rather than a decent craftsmanship comparison. To really compare actual craftsmanship levels, you would have to buy the best that each smith offers... which of course would be extremely expensive. However doing it by a set price alone would at least let you determine which is the "best bang for the buck" so to speak.
Last edited: Jun 15, 2015

RPF PREMIUM MEMBER
saber politics is the best term I've seen. What these two above me say is correct and I agree 100%. There's a lot in the details here and there, and some truly amazing work, but none of the best is very cheap.

I've owned a number of the really what might be considered high-end sabers, from some of the big name smiths and have plenty of opinions. The problem with getting honest responses is that there is a sort of... hidden side to the tiny world of custom sabers that deters a lot of people from giving honest opinions and feedback, especially if you're trying to actively build and sell your creations. No one wants to be ousted from what is already a small audience.

That said, Vader's Vault, LDM, and Genesis Customs all do stellar work. The build quality on the hilts I have had have all been top notch. LDM is a jack of all trades it seems to me and will successfully tackle just about anything out there with awesome results. VV as well, but I am only familiar with their Starkiller saber personally, and the build quality is super awesome. Take into account Orbital machining is the forgotten hero behind a lot of it, as his hilt design and machining execution really are the unsung hero of a saber that he makes part of a project.

Genesis custom sabers, is a master as what he does, and his modified MHS based sabers are super solid, well thought out, and hard to fault. He has his own style and does it very well.

Then you have some of the lesser known "smiths" who tackle tough builds and can install just about anything, and you have another group of guys who will fabricate anything.

There are lots of excellent craftsmen doing things in sabers, but also some on the complete opposite end who do terrible work and hide it with **** poor photos and a mask of politics.

Saberforge, while I have only seen one very very old hilt of his in person, has been climbing back from the ashes of his bad rep, and so far has been very active and responsive to people it seems. He also seems to not sit still and keeps bringing out new things. All I can say is that on the forums I don't think his current crop of customers are complaining too much as far as I can tell. From pics, his work looks solid. I'd definitely like to get a hold of his metal to install myself sometime.

Anyway, you ask a rather huge question with lots of different potential answers and opinions.

What Arkm said... you really have to get your hands on them and see for yourself sometimes, because most people who have legitimate beefs will not post publicly due to fear of reprisals. Nerds with power can be intimidating when all you want to do is geek out and be a 40year old kid.

RPF PREMIUM MEMBER
I was gonna come in here and see the firestorm that a certain someone would have laid down regarding Ultrasabers, but then I remembered that he got banned.

Gone but not forgotten.
Professor, that was a low blow at someone who had a strong opinion that just wanted someplace to vent and for people to listen to him.

Too bad he got banned, hehe....:angel

Seriously though, check out some of the saber forums and email the Smiths. I'm sure you will find someone willing to take on a project for you that result in a very cool saber. The real politics come into play when you go to decide what soundboard you want in your saber. Just remember this, the two big boys in the soundboard world, Plecter and Naigon, both make awesome soundboards in normal size and mini size.
S

Thanks guys this is probably the most balanced info I've seen on the subject.
Since you brought up sound boards..are the spark and crystal shard equivalent?

Gone but not forgotten.

scohrdarkshadow said:
Thanks guys this is probably the most balanced info I've seen on the subject.
Since you brought up sound boards..are the spark and crystal shard equivalent?
Click to expand...

Yes, both boards are "similar", in that-

The boards all do what we basically want a board to do. It lights up the saber and makes noises. You can download different sound fonts for both boards you mention. Both boards have different effects like flashing when the blade strikes something, pushing a button to make a different flash and sound for blade lock up effect, etc. Both boards also offer features that may be unique to each other. Is one better than the other? Can't answer that.

I will say that I have a saber that uses the older Igniter R2. The Spark has many of the same features but in a smaller size. I have 9 different sound fonts loaded on my board, nine different blade colors loaded (I use a RGBA LEDEngine LED), it flashes whatever color I want when the blade hits something, and button activated lock up produces yet another color (of my choice) that I pre-load onto the board.

Both boards you mention have many, many adjustments that you can tinker with. Either one would be a great choice for a mid range saber.

Oh, and here is a pic of my Igniter powered saber.

RPF PREMIUM MEMBER
Don't forget unless you're on Erv's approved installer list you can't get a crystal shard unless you buy a saber from a smith who is able to build with it.

Thats not not to say you can't get a take out from someone but you can't just go buy a new one to build with.

Gone but not forgotten.
Good point Scottjua, forgot about that fact. I'm not on FX anymore so it had slipped my mind.

I just posted a thread about finding a good saber for a 500$ price range then found this thread. I'll have to check out the recommended smiths you guys mentioned. Thanks for the saber knowledge.
H

I've been looking at the Saber Forge project on Kickstarter for their modular saber parts - a great idea to bring in a lower price way of getting to a customized sabre and do like their threaded blade system.

The problem I see is he's not posting any answers to questions in the FAQ - and not responding to questions of any technical nature.

Thoughts on the electronics board used in those sabers? Are they programmable? Do they flash when impacting? What is the speaker quality there - as the speaker and amp are likely to affect audio quality as much as anything.

A little off subject, but a good place for a saber noob to ask, is there any smiths out there that could install electronics into an already built hilt?
For a price of course

There definitely are. I am also new to the saber world but have been spending too much time doing saber research for all my dream sabers.

There are smiths that will do custom builds, rip out old components from others sabers and put in custom upgrades, and it also seems to be common to convert Hasbro or Master replica sabers to duel ready sabers with nice new sound boards and/or lighting with removable blades.

I haven't actually used one however so while I am pretty sure who I will use, I don't have any experience with them yet.

Also the politics deal is simply crazy it seems from a newbie. It seems that some boards/communities completely ingore ultrasabers and saberforge. Regardless of what people think about their quality, they seem too big to simply ignore.
D

Whatever you do, do not trust or buy from UltraSabers.

And they scam you more by making sure the couplers on their saber staffs don't line up properly as you can see in the picture and then offer to send you proper ones if you pay a lot of extra money them for it.

It also showed up with two different size blades of different qualities. Save yourself the headache and just shop elsewhere, these are very low quality. 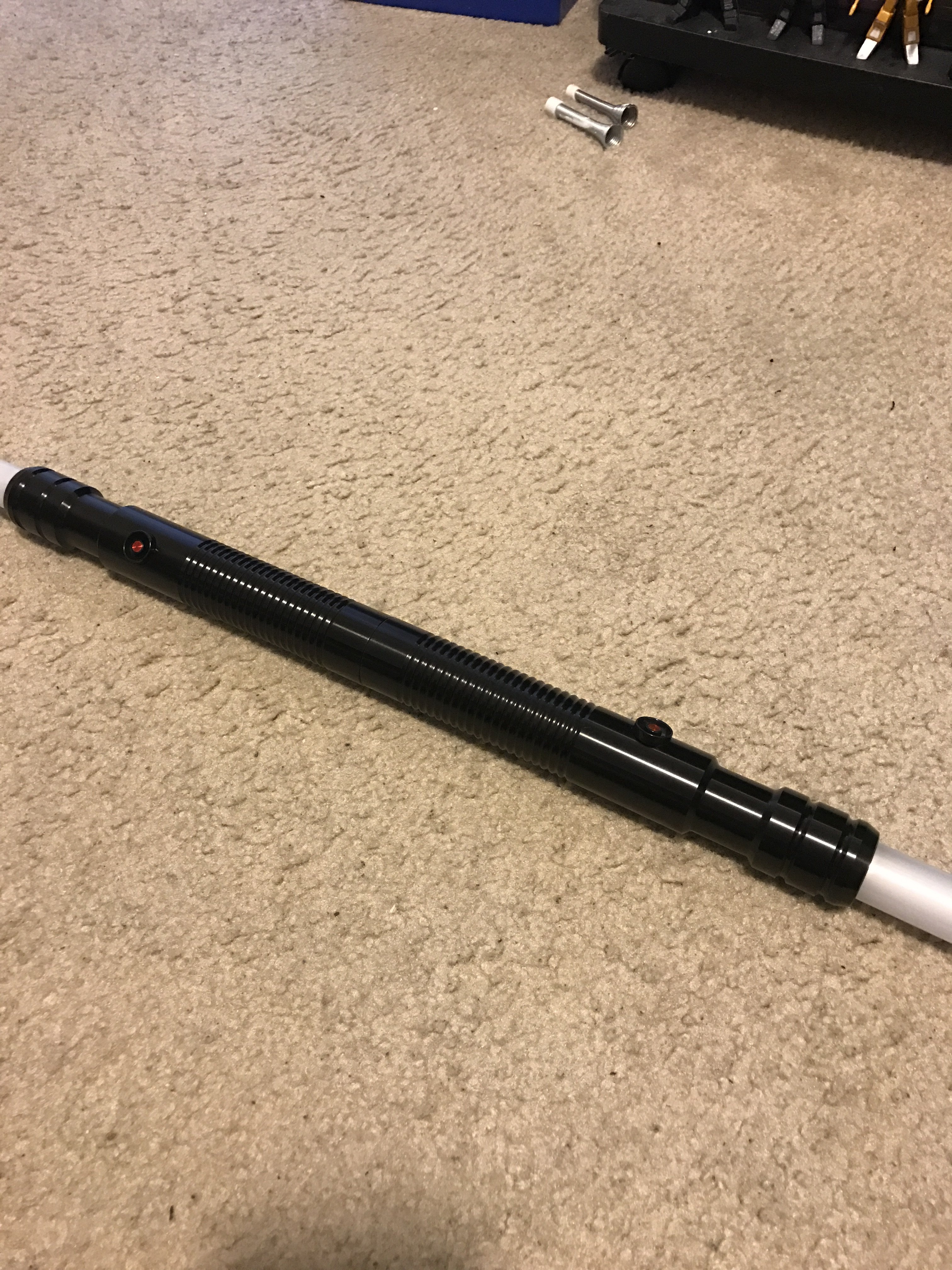 I'm not sure I ever got a direct response, what I meant before was, could anyone direct me to a service where I could perhaps send a saber smith a hilt I made and pay them to install the hardware? I don't possess any electronic skills whatsoever lol

Gone but not forgotten.
Go to https://www.fx-sabers.com/forum/ and http://imperialroyalarms.com/
Both have a list of sabersmiths that you can contact.