RPF PREMIUM MEMBER
EDIT 11/15/21: This run is now CLOSED. All extra copies have been sold. The people who did not respond on the list had their copies sold to others. I've updated the list to reflect the status of everyone's orders.

Ok so it looks like there is enough interest to do a run of these. I am grouping as much of the printing as I can to keep costs down. Here is the price list, as some have asked about only ordering certain pieces:

Order list:
I'm now collecting payment so we can have these in hand by the holidays.

I originally started this in the free paper props thread years ago but I've restarted it from scratch and decided to produce the entire game, box and all. Clue is my #1 favorite board game of all time. I have more versions than I can count and some of them I paid far too much to get my hands on... I even have the VCR game editions. The one that I had always hoped for was one based on the movie. I decided it was time to make one. 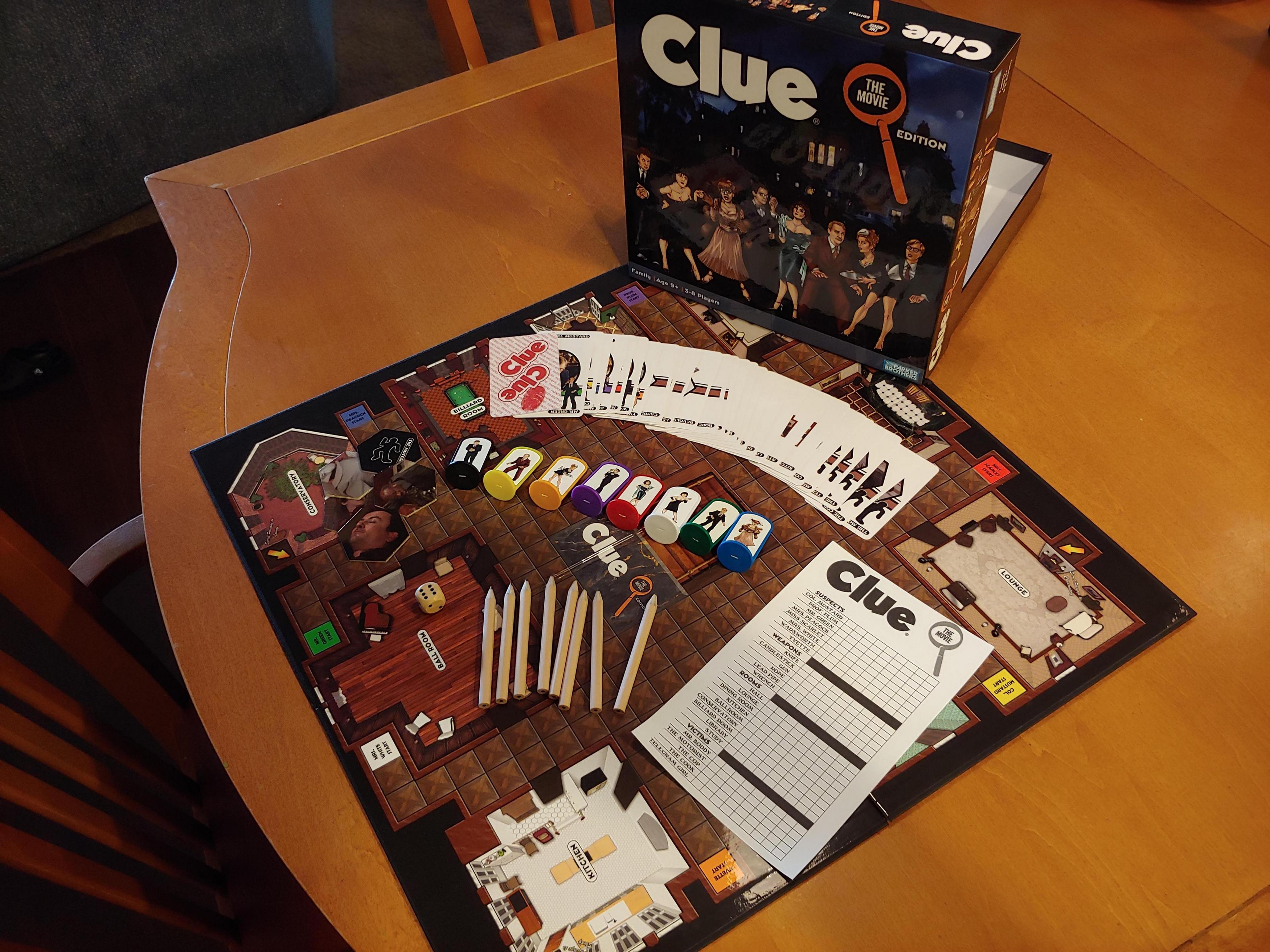 ​
There were some EXCELLENT paintings from this artist:
Movie stuff by MrOrozco on deviantART
He painted them on commission
I pulled the individual characters apart to be used as playing pieces.

Card back (from the closing credits of the movie):

I've also been working on a version of rules where you can add victims to the solution for an added challenge. So you would need to figure out who killed who in which room and with what weapon.

They have tiles that are placed on the board as you play similar to the weapons:

For the board, I am recreating the rooms as they looked in the movie but using the layout of the standard 1986 board, with some modifications. I am also including Easter eggs in some of the rooms from the movie. Some are obvious, some will require a magnifying glass .
Rooms:

I'm modeling the movie weapons in 3d for printing. 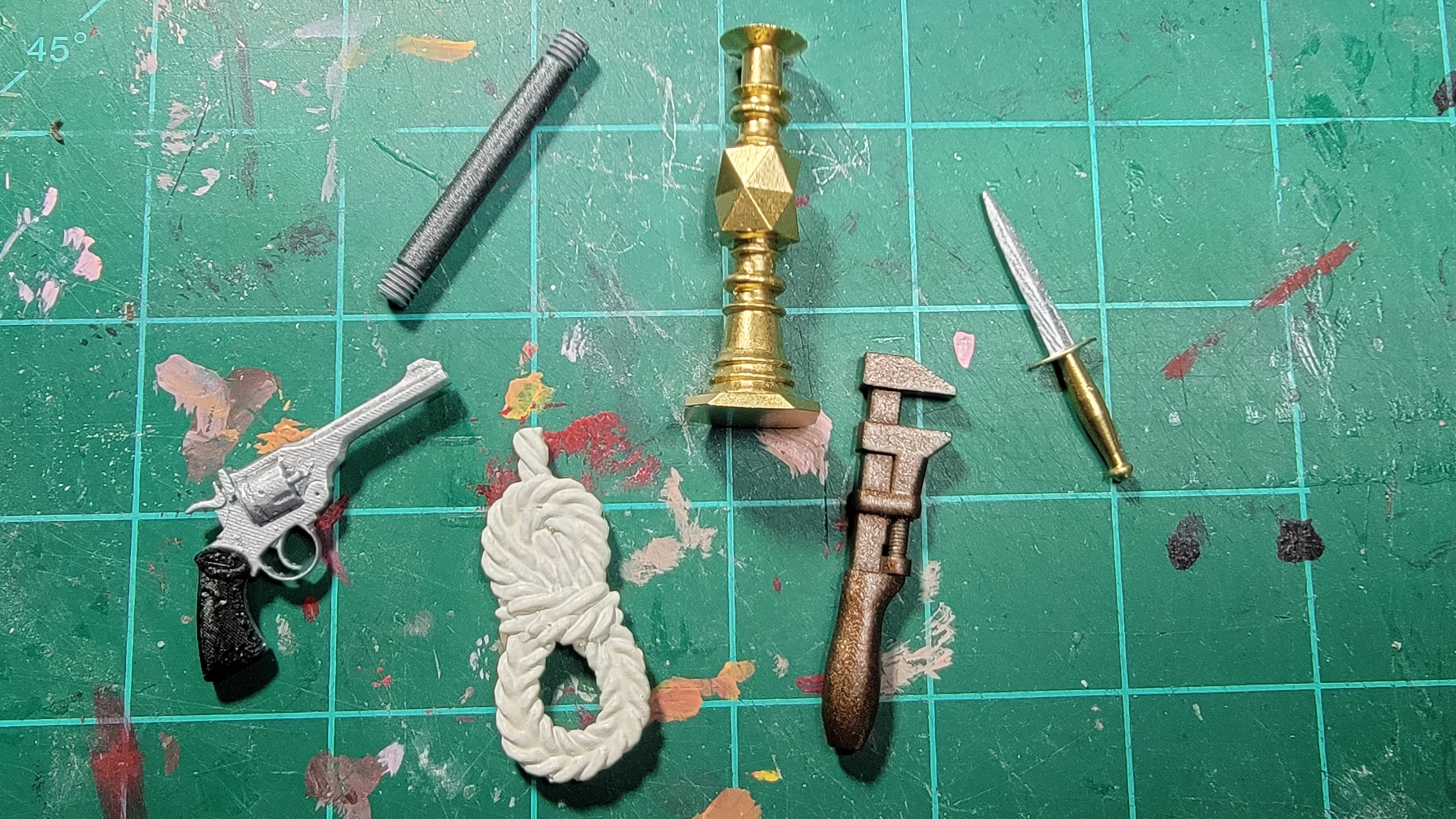 This is excellent! Fantastic work so far

I love Clue, it's one of my favourite films. So re-watchable, so quotable; "Flames. Flames? FLAMES.. on.. the side of my face"

RPF PREMIUM MEMBER
WOW! IMPRESSIVE! Favorite movie and I'll be watching this thread! Would love to have this edition of the game

This is such a great game, and movie. This is an awesome idea. This looks fantastic!

Will you be adding the secret rooms as notes on the rooms?

This is so awesome!! I'll be following this thread.

RPF PREMIUM MEMBER
Added the Billiard Room! Even has the tape recorder Yvette was using

Kal Argos said:
Will you be adding the secret rooms as notes on the rooms?
Click to expand...

What do you mean? Are you referring to the text notating that there is a secret passage? Yes that will be on the board.

Marc Wagner said:
What do you mean? Are you referring to the text notating that there is a secret passage? Yes that will be on the board.
Click to expand...

Yes, thats what i meant.

Great job on this!!

Very nice work - and thanks a lot for sharing!

I have a 1950's edition that I got from my Mom. It has a classic look to it. But I might redo the cards with the Movie Actors and weapons and print off a set of cards to go with my vintage game.

RPF PREMIUM MEMBER
Library is done! I can't wait for you guys to see this artwork up close.

RPF PREMIUM MEMBER
I Love your renders. Can I get a copy for my own use ? (or for a small fee?)

Also, the minimum usable detail for steel from Shapeways is 1mm. Things like the threads on the pipe wrench could only be done in "Fine Detail Plastic". (which is cheaper anyway)

If you want metal and keep those high rez detail, you would have to use "High Detail Steel" from i.materialise.com , and maximum size is 45x45x45mm.

Also, high detail steel is one object per file, so all objects would be independently printed and priced.
Last edited: Sep 25, 2019

Jintosh said:
I Love your renders. Can I get a copy for my own use ? (or for a small fee?)
Click to expand...

Sure! I'm still making small adjustments. The lead pipe in the movie wasn't bent so I still need to fix that. I'm considering doing a run of completed games once I'm finished if there's enough interest.
I do have all of the weapons in physical (and full size) form:

Jintosh said:
Things like the threads on the pipe wrench could only be done in "Fine Detail Plastic". (which is cheaper anyway)
Click to expand...

Marc Wagner said:
Jintosh said: Things like the threads on the pipe wrench could only be done in "Fine Detail Plastic". (which is cheaper anyway)

Yeah I know... I am printing prototypes on my own printer now... we'll see how they turn out.
Click to expand...

RPF PREMIUM MEMBER
This is looking fantastic!
It blows me away that they didn't do a lisenced movie version. What a missed opportunity.

Funky said:
This is looking fantastic!
It blows me away that they didn't do a lisenced movie version. What a missed opportunity.
Click to expand...

Especially since they released a redesigned version a year after the movie came out. However, the movie didn't perform well at the box office so it does make sense that they wouldn't want to pay all of the licensing and likeness rights fees to the actors in order to make such a version.

Oddly enough, there is a 1987 German version of Cluedo where they used the likenesses of the VCR game actors. This was the only version to do so and it wasn't released anywhere else. 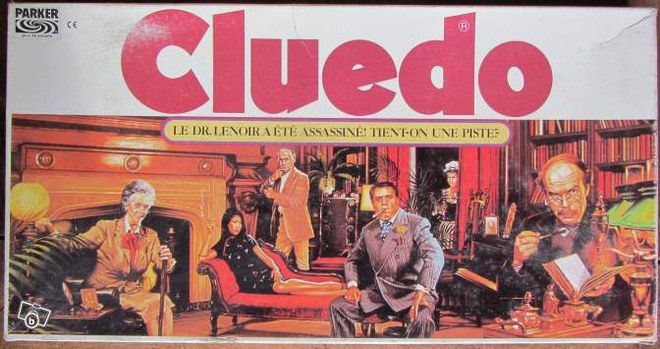 RPF PREMIUM MEMBER
Study is done! This one is full of items from the movie. Only the lounge and conservatory left!

I have to say the most difficult part of reproducing the rooms is tracking down the artwork that was used to decorate the sets. Some of the paintings are very difficult to see clearly so I am having to extract them from screen captures and clean them up as best I can. One of the presidential portraits in the study of James Garfield is in color in the movie but all I can find online is a black and white version from the national archives. So I had to partially colorize it myself. Some of the smaller paintings I was able to simply take a screen grab and shrink it down since they are at an angle and small enough not to look blurry. All in all I think it's coming out well. I have only had to substitute two paintings with something visually similar because I simply was not able to get a clean enough screengrab nor was I able to find an image of the actual painting. There is a portrait in the hall which is never shown close enough to identify who the portrait is of so as a little Easter egg I substituted it with a portrait of J Edgar Hoover
Last edited: Sep 26, 2019

RPF PREMIUM MEMBER
You are going WAY beyond, by looking up the paintings. Awesome job !
I am loving this project.

Jintosh said:
You are going WAY beyond, by looking up the paintings. Awesome job !
I am loving this project.
Click to expand...

Thank you! This one has been on my mind for a long time and I really want to do it right.