RPF PREMIUM MEMBER
In September 2018 I began a project to build an animatronic C-3PO. I'm going to post here to record my progress since then, an hopefully keep updates coming until it's finished. The goal is to have him operational for Star Wars Celebration Chicago in mid-April 2019, working as the greeter at the Droid Builders room. One stretch goal is to have him tell the story of the saga in Ewokese, as he does in ROTJ.

This will be a stationary animatronic with as much range of motion as I can achieve. My goal is to replicate the movement and degrees of freedom of the C-3PO animatronic in the Star Tours queue area in the Disney parks. So, anchored at the feet, with legs and pants that can pivot at the waist, torso movement front-back and side-side, full shoulder-arm-wrist-finger articulation, and neck/head motion. I want to program the motion to be as realistic as possible, and to truly convey the spirit of the character. Voice-over, background sound effects, and a lighted base are also part of the plan.

I’ve wanted my own protocol droid for decades, actually longer than I've wanted my own astromech droid (which I've had completed since 2005). Now’s the time. Also, I am too claustrophobic to even attempt it as a costume. Plus I could never achieve the perfection of Gordon Tarpley or Chris Bartlett or Simon Wilke. So, animatronic it is.

I'll be posting updates as things happen. Here are some of the sketches from my project sketchbook where I try to work things out on paper before going to CAD or fabrication/prototypes:

For 3D printers, I have two Formbot T-Rex2's, a Creality CR-10S4, and a Monoprice Maker Select V1.

Up until Feb 2019 I've been printing everything with a .4mm nozzle. Now I'm looking at switching to .8mm nozzle and .8mm wall upon the advice of Gordon Tarpley and Tom Spina.

About 28 hours into two 72 hour prints for the front half of the torso/chest shells:

Dry fit of back details before gluing and installation on torso:

Printing the first set of shoes (upgraded to a different pair later on), and cutting holes into foot soles for clearance around vertical aluminum extrusions (frame to be discussed in future posts):

I don’t even have any words. All I can come up with is “giggity”.

This was a 41 hour long print job.

After 60 hours printing the front, 12 hours on the leg rings, and a whopping 72 hours for the back half we have COMPLETED SPACE PANTS! SPACE PANTS! LOOK AT THEM! YES ! YES! YES! YES! (From the week of October 2-ish, 2018)

Right hand plate print complete. Next: print the fingers (From models by Gordon Tarpley) on or around Nov 10, 2018

RPF PREMIUM MEMBER
This is very exciting!
I wanted to say something about having to be careful in my excitement to not short-circuit... but anyway, this is looking awesome so far! Goldenrod does not get the love he deserves on the boards.

Plane-cutting the left thigh shell for printing. This produces a perfectly flat face for each part to rest on the print bed surface. (Sept 25, 2018)

Printing and gluing up the left knee assembly - this was the first round of leg printing before Jesse's new files were released (Sept 27, 2018)

Re-printed the legs from Jesse's new files. To paraphrase Morrissey, “Every day is like leg day.” Feb 4-10 has been Left Leg Week. Feb 11-17 was Right Leg Week. After filling and sanding the seams will disappear.

When a critical support tower fails halfway through a 48-hour print, you go full MacGyver to save it.

I am pleased to officially declare the end of Leg Week(s). Here I'm test fitting the legs and feet/shoes on the aluminum extrusion frame. The torso pivot mechanism has been removed for this photo. All of those seams will get sanded out and disappear under the primer coats. 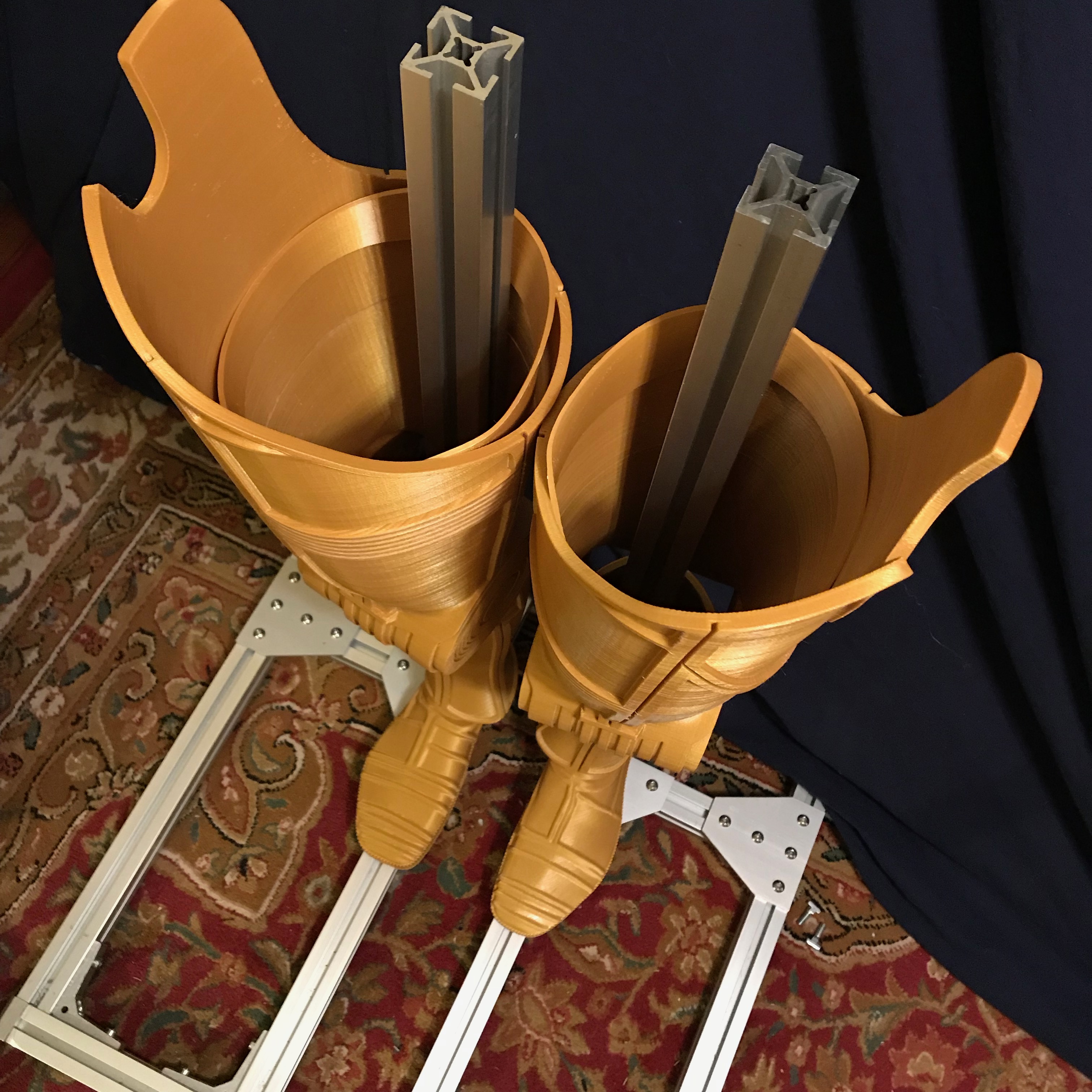 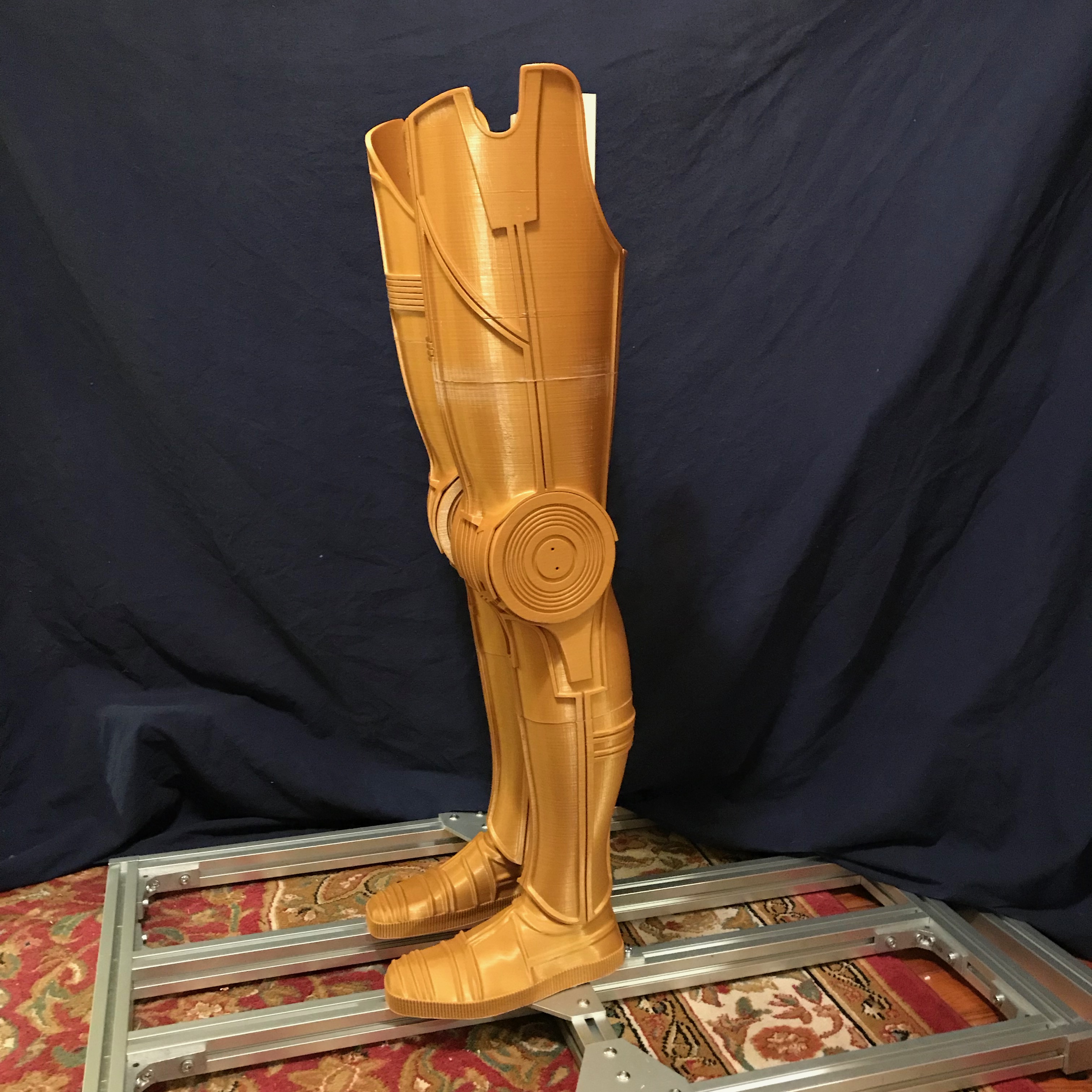 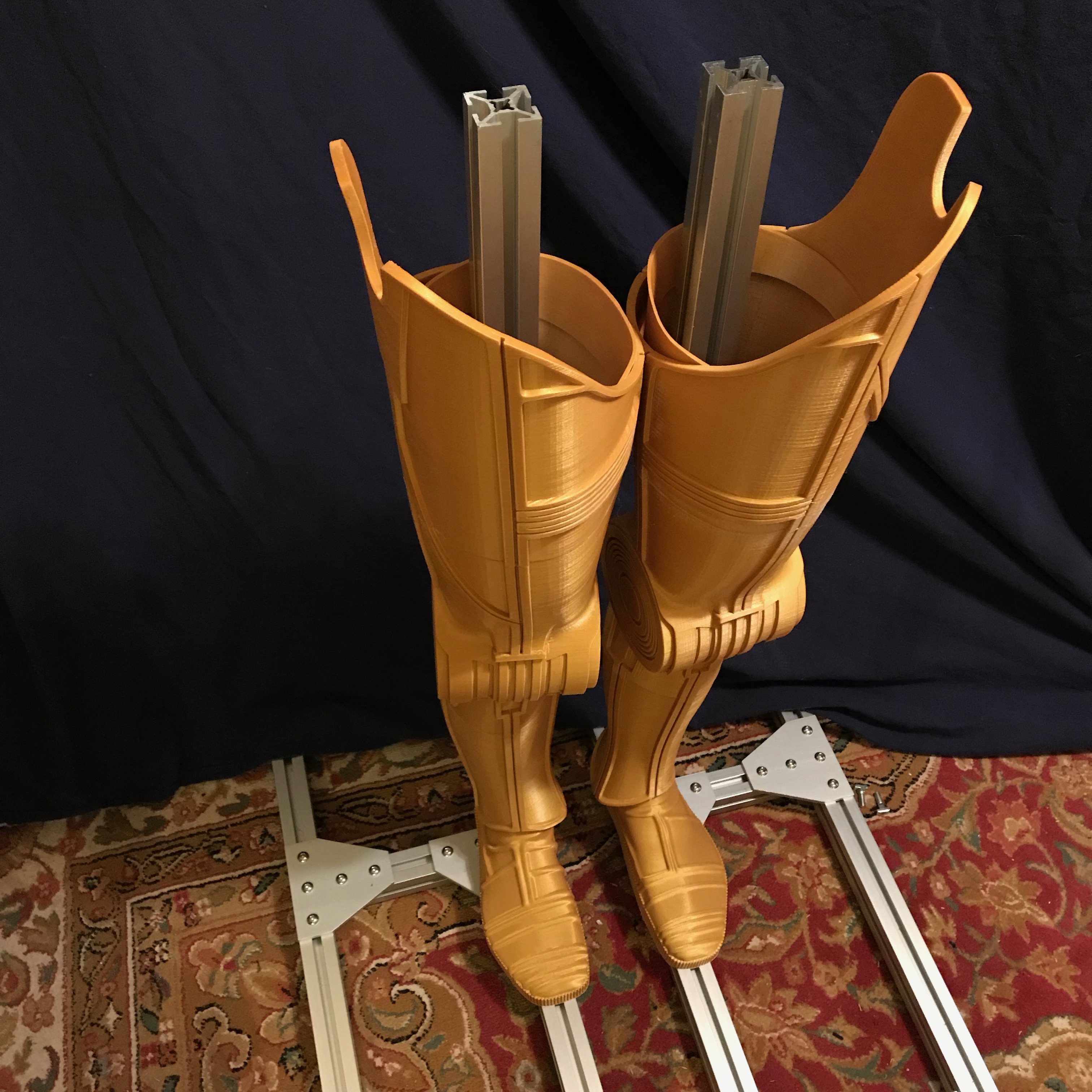 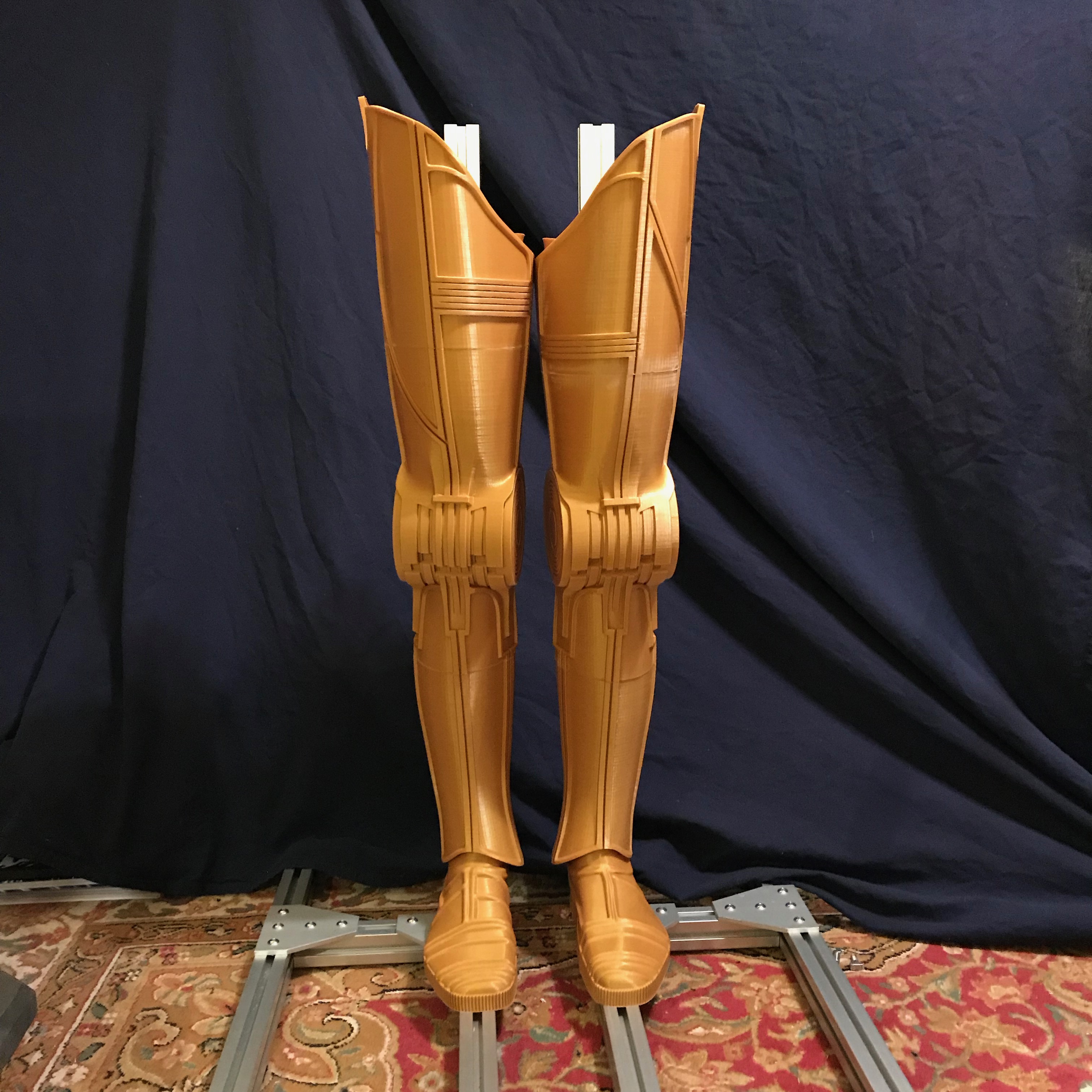 The interior of each body shell part will get a layer or two of fiberglass mesh and resin for strength, and to allow for attachment points. Outer surface will get multiple coats of automotive filler-primer (2K / catalytic) and wet sanding for a gloss finish. Then a coat of hydrochrome for that shiny look.

Here's the first couple of layers of fiberglass mesh and resin on the inside surface of C-3PO’s front and back torso shells and one of the shoulder bells.

Testing the multi-axis neck mechanism. Looks like it will have plenty of range of motion to replicate C-3PO’s head movements. I put this together using all off-the-shelf parts from ServoCity and McMaster-Carr.

The frame uses 4040 aluminum extrusion and connectors. It's good and solid, and allows for adjustment and attachment. Originally built it to be a 42" square base in September 2018.

Later on in October 2018, I spent time cutting down the 40mm 80/20 aluminum extrusion base to get it below 28.5 inches so it will fit through most doorways. Planning ahead for April 2019 when this rig has to travel to Star Wars Celebration.