Hope everything is going well!

Let me sort of introduce myself.

My name is Vitaly, I'm based in Moscow/Russia but currently I'm in Los Angeles and going to make a sci-fi short film here.
Normally, I work as a motion graphics designer/art director and VFX/postproduction artist. My demoreel can be seen on Vimeo: vimeo.com/82774531
Also, I made a sci-fi short film three years ago back in Moscow, you can check out the teaser here: vimeo.com/24678989

Now, the film I'm planning to shoot is a sci-fi short with an '80s vibe to it, with a kind of retro-futuristic touch. There is a scene where a guy uses what I can call a hacking gadget to hack into an electronic lock system, and I think Grid Compass or Gridcase suits this purpose very well: it's from the '80s and very custom-looking. At first glance, this kind of device/prop is pretty hard to find and pick up at a prop shop. I know that one of the Grids was used in Aliens (one of my favorites) -- that's why I decided to post on this forum.

The device/prop can be broken/out of operation since I'm gonna do screen replacements (VFX) with a custom user interface.

I guess my question would be, do you guys know where I can get this sweet prop (again, even out of operation/broken) in Los Angeles for two shooting days somewhere in April? No brutal sledgehammer crash'n'burn scenes in the film.

PS: There is another prop I'm looking for -- Apollo Domain Workstation 1982 or something that looks very similar/scientific and not a home IBM PC, but I think it would be even harder to find.

Just in case, my email: v.verlov@gmail.com

Thank you! I'd appreciate any help.

After some looking around, the odds of finding a Gridcase or a Grid Compass may not be as easy or cheap (I checked eBay, found two Gridcases, no Grid Compass computers). Honestly, it'd be easier to scratch build a prop that looks like a retro computer by using a vacuumform machine and parts from a readily available 1990s laptop (like an el-cheapo IBM Thinkpad, or another 1980s laptop, something like the Zenith Supersport 8088. Basically, you're only borrowing the keyboard from it). Before you say, "how can a scratch built prop look retro?" Well, if you have seen any of the TV show Halt and Catch Fire, which takes place in the 1980s (starting in 1983), the Cardiff Electric Giant computer featured in the show (in particular the later half of the season where the computer is fully assembled), which looks like it came out of the 1980s (as does the attempted rip-off, the Slingshot). Below are pictures from the show: 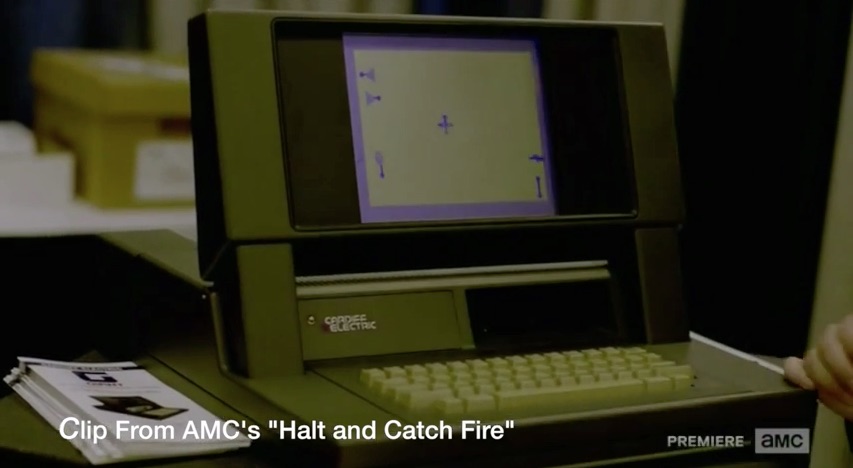 Though both of those may have been made with an injection mold, you can easily design and create a Gridcase-like prop by using a vaccuumform machine and using a thick guide of styrene. Creating a positive wouldn't be too hard (using wood, maybe pieces of wood and detailing added using clay), and you'd have to due a couple of pulls to get the sides and pieces like you need them and then trim and cut the plastic.

For the Terminal, I don't know of anyone who would still have such a terminal. You could cheat it with tight shots of the monitor and a heavily modified keyboard, including some additional grebbling, or if you need to show the full machine, you can create a cabinet that looks similar and only create two or three sides. You don't have to create all four sides, just the sides you need to cheat that it looks like a complete machine (basically, the same trick that many studios used to use for houses by building facades that had two or three sides completely built).

Another thing I can suggest that if you're going to try to make like retro-futuristic hackers, I recommend also looking at made-up gadgets in films from that period. One that comes to mind is the 1986 film Black Moon Rising, and Quint's alarm system hacking device. Another that comes to mind is from TRON (1982) with Flynn's "big door" device. And Hudson's bypass device from Aliens that's another that comes to mind. Or, you can use retro electronics (for the classic John Carpenter film Escape from New York, the tracking device Snake uses to follow the President's personal transponder was made from a readily available hand hand electronic game).

Or, you can actually look at actual historical, homebrewed electronics or hacking devices, such as the Blue Box, as seen here:

But, if you're determined to have a real Gridcase and Apollo Domain computer systems, you may want to check flea markets (for the Gridcase) or maybe see if there is a technology museum in your area that may have them.

Thank you for the reply!

For the Apollo, I forgot to explicitly mention that I need only a keyboard and a monitor. They both look sort of scientific/retro-futuristic which is exactly what I'm looking for. Technically it might be any other computer system from 1982-1984, with a similar scientific look. But still, an Apollo would be a perfect choice. So we'll keep looking for some time.

As for building a prop, I have a couple of really custom ones to build/fabricate, and the budget is pretty tight, so I'm not sure if faking something that looks like a Gridcase would be a better/cheaper idea than having an actual Gridcase (please correct me if I'm wrong). Overall, from what I heard, it looks like it's easier to find than the Apollo.

Basically, for "the hacking device" I need something that has a display and a keypad/keyboard. That's why I think stuff like Hudson's ("Game over, man!") bypass device in Aliens won't do the job. Sure, if I had a larger production budget, I would go for a really customized look (like the device from Alien: Isolation game), but I guess I have to stick to the Gridcase design which, by the way, is a good one and serves the story pretty well, both functionally and visually.

Terminator 2 bust on a budget.