DatCroissantBoi said:
i agree, the usb cable is a great idea, i never would’ve thought of that! right now i have a braided elastic band holding mine together
i had to make the band out of it too since the piece i have holding them together was causing too much stretch when i used the actual casio straps, ah well
may not be f-100s but damn i think these are sexy too
Click to expand...

Interesting. Marine Nationale (French Marines) used an elastic strap similar to that on their dive watches.

I was just scrolling through this thread. I came to the party late, and owe a lot of thanks to the people here that figured this stuff ages ago.
Also, a big thanks to Magnoli for the excellent insignia.
I just ordered a Gildan t-shirt in kiwi. Now I'm looking at all the pockets I have to sew on the crew pants.

RPF PREMIUM MEMBER
Octipig Good you got kiwi; it's darker than the avocado color.

I had a bit of insight to the crew uniforms years and years ago and it went a little like this.
When I saw Alien, I was astounded by the real feel of the crew uniforms and how natural the crew looked in them. My dad came home from work a couple of days later and still had his work pants on ( he was a painter and decorator) and as I was looking at them I was struck by how familiar they looked even though they were new. After a little small talk I pointed out that he appeared to be wearing new work pants, " Oh these" he said, " got them at the Army and Navy Stores on Lime Street, Three quid" .
Flabbergasted wasn't the word, they were Nostromo Crew pants down to the knee pads. So on the next weekend I paid a visit and sure enough the pants were there just as Dad had said, but so were the jackets, pilot shirts, flight suits, you name it the place was full of them.
The Army And Navy Stores was a big chain in Britain at the time and it occurred to me that the wardrobe department must have spent a few days trawling through the wares before coming up with the iconic uniforms we now know so well.
I bought a mk3 jacket and some painters pants (as they were labelled) but never got round to applying insignia and wore them as normal wear.
As a further Great Scott moment, I would like to point out that the store had hundreds of these items!!!!

ZYZYGY said:
I had a bit of insight to the crew uniforms years and years ago and it went a little like this.
When I saw Alien, I was astounded by the real feel of the crew uniforms and how natural the crew looked in them. My dad came home from work a couple of days later and still had his work pants on ( he was a painter and decorator) and as I was looking at them I was struck by how familiar they looked even though they were new. After a little small talk I pointed out that he appeared to be wearing new work pants, " Oh these" he said, " got them at the Army and Navy Stores on Lime Street, Three quid"
Click to expand...

Ballyclare, the UK uniform supplier that makes the MK3 flight jacket makes a ton of work clothes. I agree, it's likely the Nostromo uniforms are based on their patterns. Attached is a screen grab of an Ballyclare EMT work shirt. It would make a great starting point for a crew uniform. I've seen examples that had the additional name-tag/penholder things that are sewn above the pockets. (edit to add) Although hard to see, it even has the small pocket on left shoulder sleeve. 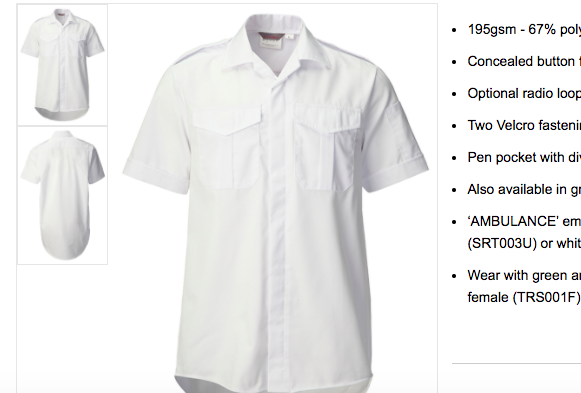 RPF PREMIUM MEMBER
Not in the film of course, but I just thought they'd make cool stickers. I just posted them on my SITE if you're interested!

RPF PREMIUM MEMBER
Hi everyone, I wanted to give something back to a community I have learned so much from.

My journey to the perfect nostromo wings replica.

So while I was working on my own Nostromo jacket, I never was happy with any of the wings that were out there – mostly off eBay which are machine sewn standard patch. Also available is Magnoli’s wings which are the best looking so far but not quite exactly like the on-screen ones.

I am embarrassed to share this picture, this is my first ever attempt at replicating the Nostromo wings, but I will share it nonetheless:

Then I went back to school researching the original wings from the movie:

The ceiling of king Ramses VI tomb in the Vally of kings in Luxor:

Other versions of the winged sun:
It is a symbol associated with divinity, royalty and power in the Ancient Near East (Egypt, Mesopotamia, Anatolia, and Persia).

So I was after a version based on this design by John Mollo:

Turns out there are 2 types of wing designs used by Dallas and Kane's costumes. One for the shirts and one for the jackets.

Shirt design, with somewhat of an "angular" wing:

( I'm not sure where this picture is from but my best guess is the original shirt worn by Parker/Dallas in several scenes?)

Jacket version of the wings, which is truer to Mollo's original sketch of a straighter 'boxed' shape:

Thanks to a few members of the RPF, namely SG-RB and Funky, [EDIT Sept 3rd: Correction. It was stephen210 and funky]I have been able to get pictures of Kane's original jacket, which is a part of Bob Burns’s collection. These pictures are valuable in order to fully understand the design of the original screen used wings:
Kane jacket original:

These pictures gave me a proper understanding of the making process that went in to these wings, namely the specific threading technique, placement, use of gold or yellow thread in combination with the metallic coil and dimensions of the piece as a whole.

Goldwork embroidery is an old embroidery technique considered very luxurious and once available only to the very wealthy. Used in religious, royal and nobility class textiles and military uniforms.

The threads used in goldwork are made from real metal. With some types of goldwork threads, the metal is wrapped around a fiber core, while with other types of metal threads, the whole “thread” is all metal. Therefore due to the intricate work involved, it is exclusively handmade. Thus the price is high compared to machine sewn patches.

Then, after spending hours reading through this very thread, I learned that almost a decade ago merliner made a run of 25 goldwork embroidered wings:

And as they are stunningly beautiful, I couldn’t help but notice that his wings were made from one type of shiny finish metallic thread. Whereas the on screen wings used a combination of shiny and matte finish.
As illustrated here:

And can clearly be seen here, here and here:

I then went to work, perfecting and improving my goldwork skills and working with a professional artist. I ended up with these samples:

First proper attempt, but still not quite there:

Further attempts: (with this one I was very happy, as it was very true to the original John Mollo design)

But, alas, it is not the version that ended up in the movie, so I had to remove the wavy inner part of the wings. I eventually ended up with these two designs. I feel like these are the most true-to-screen and true-to-the-original-patches in both design and production process: 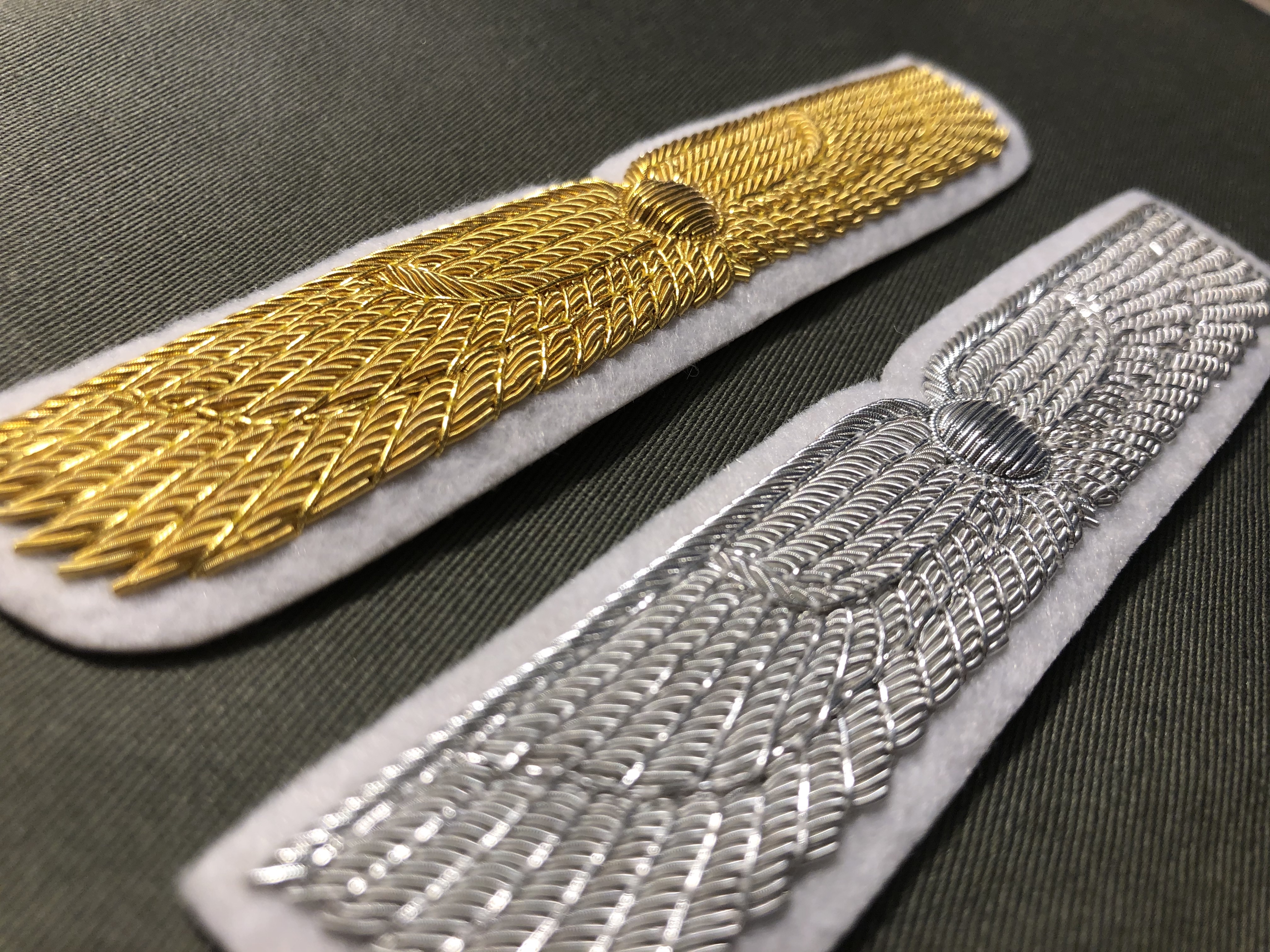 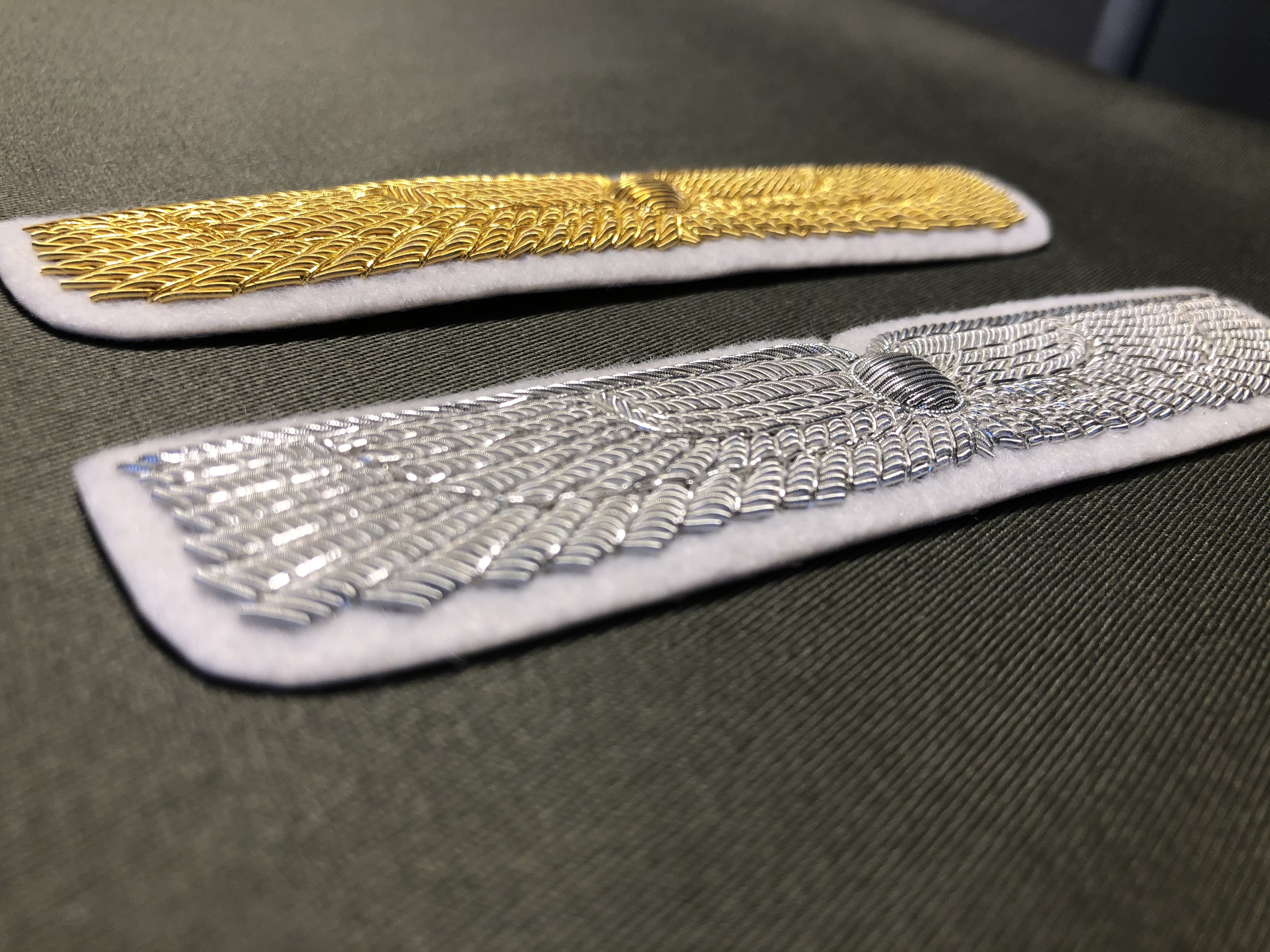 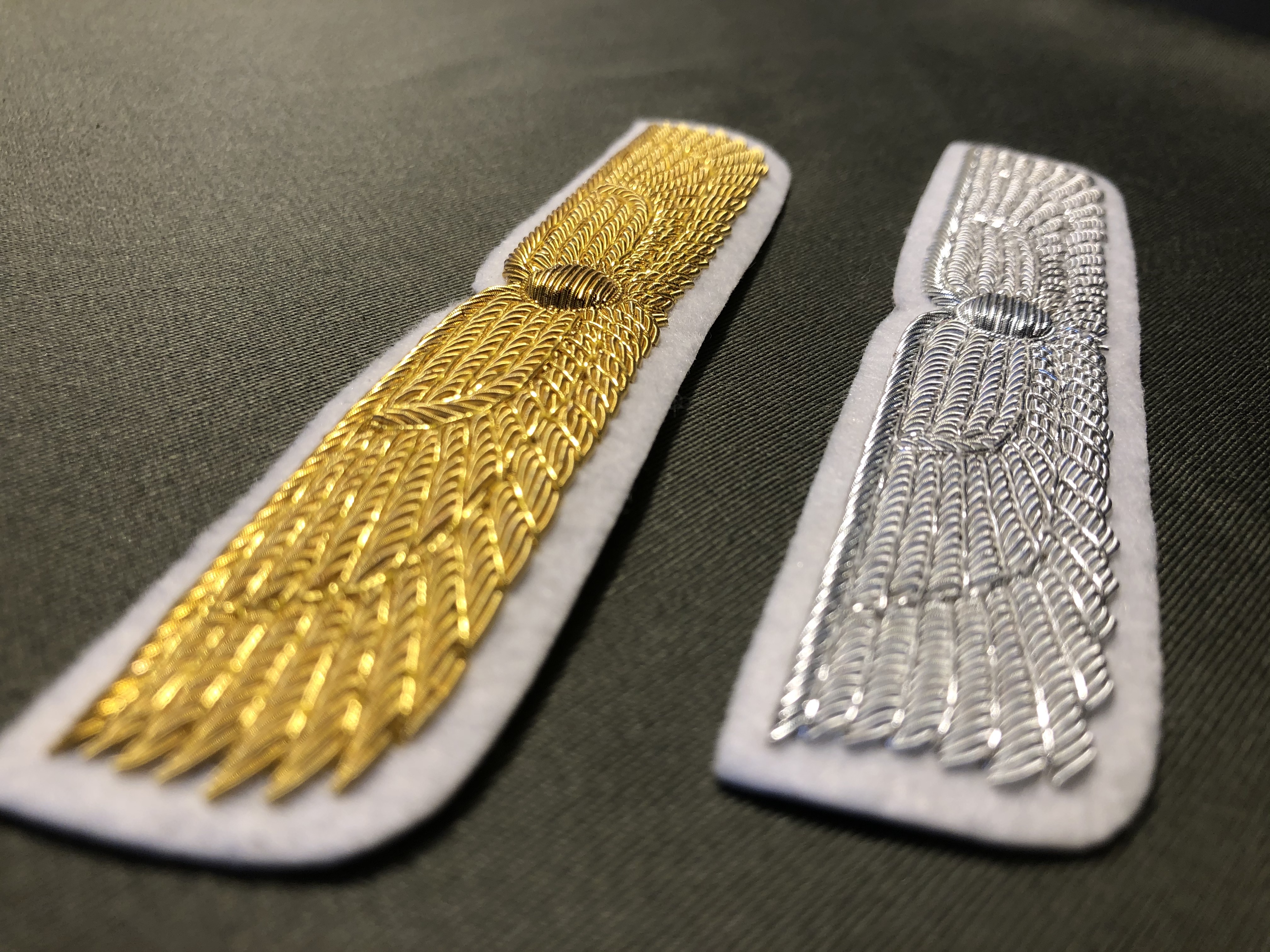 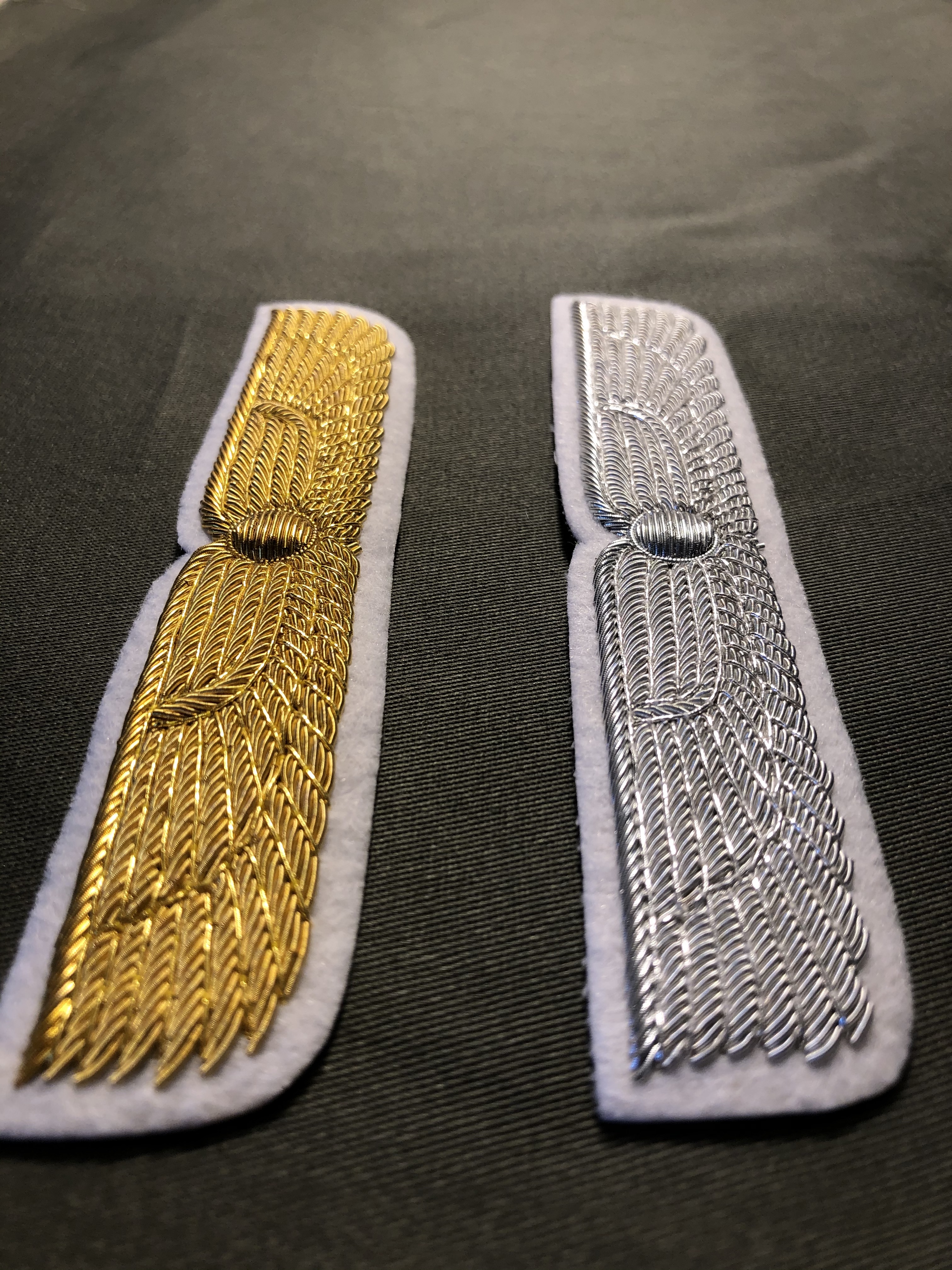 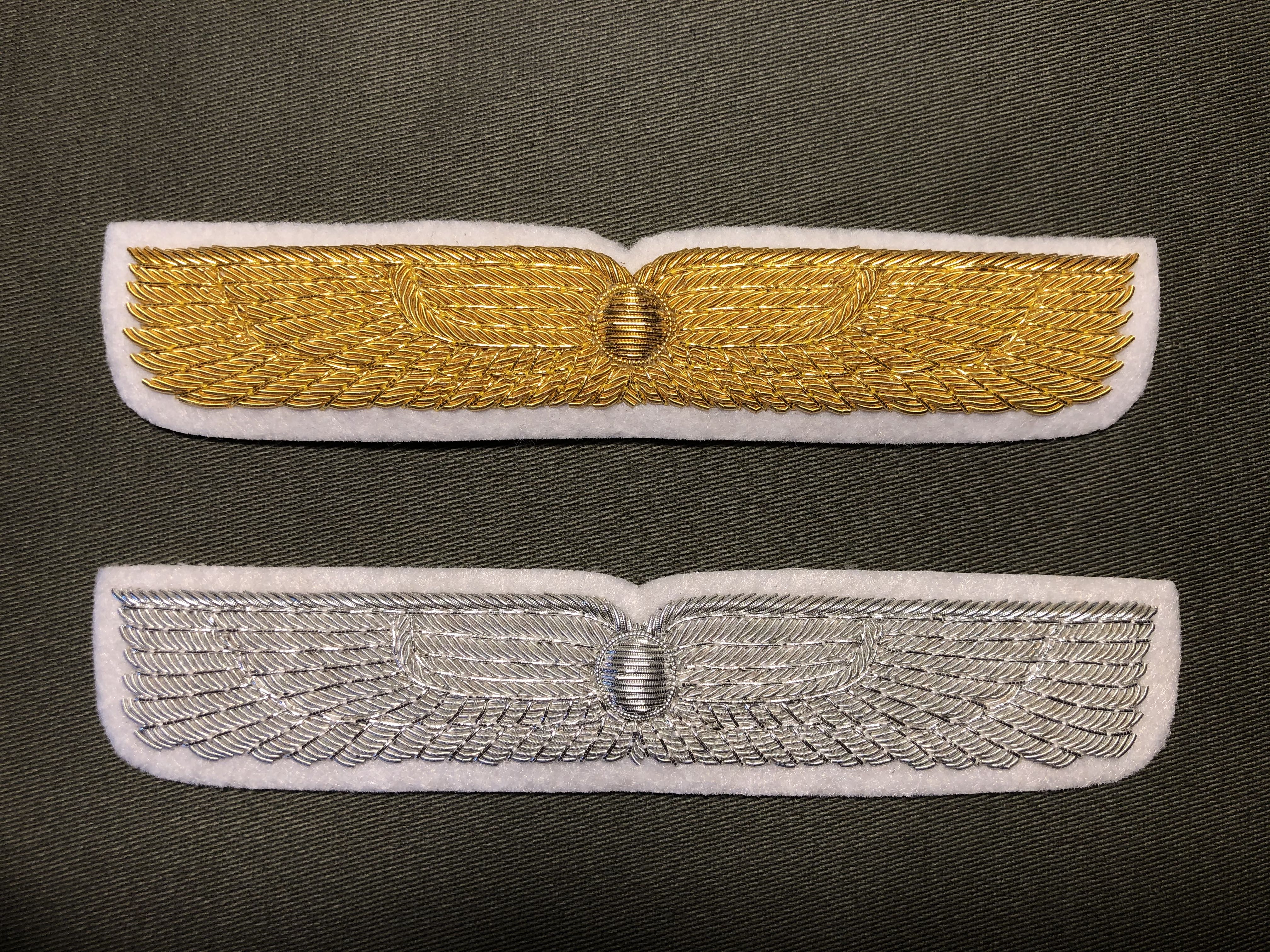 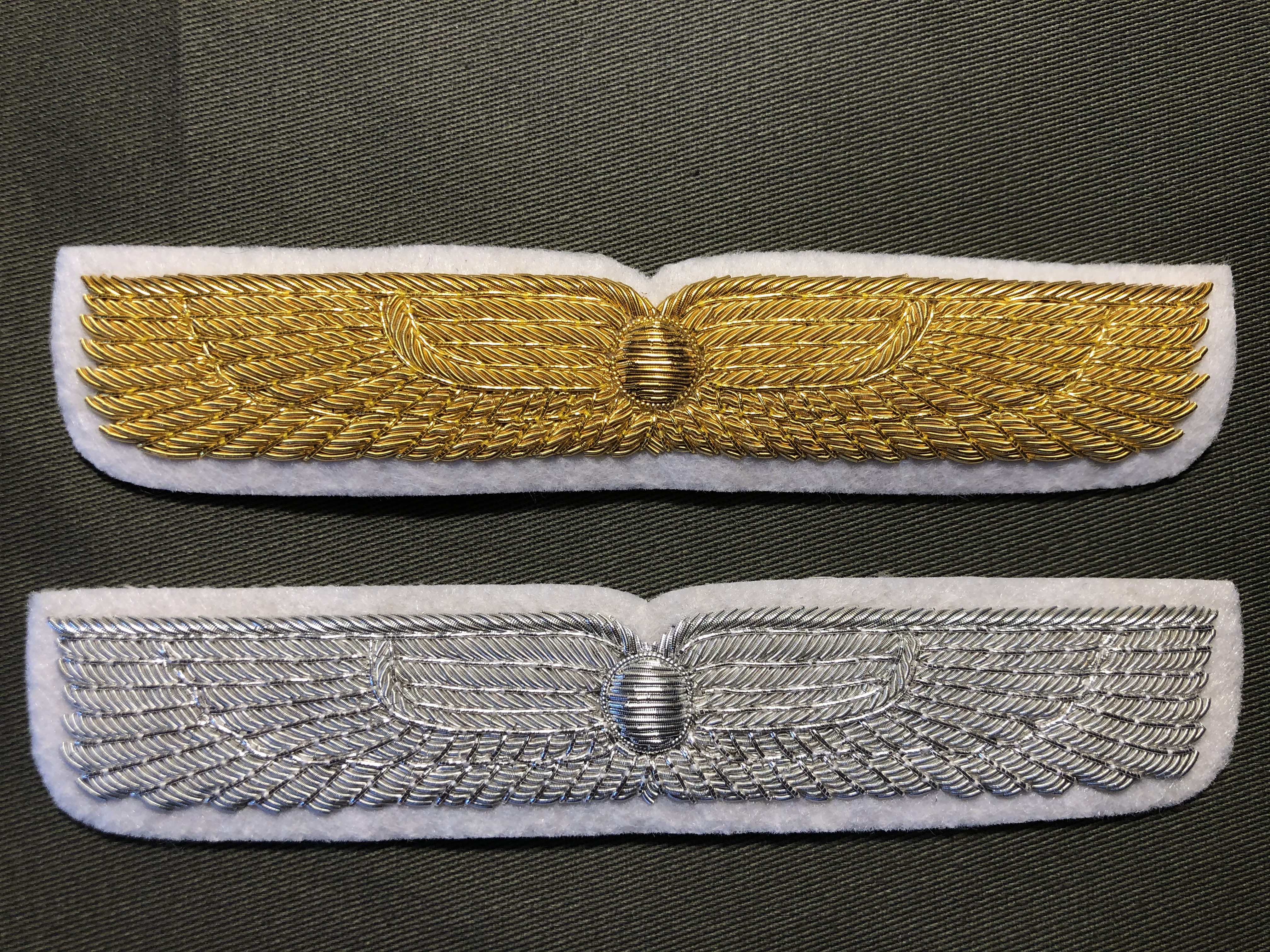 In conclusion, I have spent a tremendous amount of time and effort trying to perfect these wings. it also adds to my appreciation of the creative process that went in to the production design of this film, it is truly mind blowing! It also just goes to show how far Ridley Scott's layer upon layer approach to movie making went. I am a bit biased, but I couldn't be happier with the end result. Hope you like them

Notable attempts (I do not know by who, if anyone knows please let me know):

[EDIT Sept 3rd: SG-RB, has brought to my attention that this is also merliner 's work. Thank you]

(I designed this post to be specifically and exclusively Nostromo wing patch oriented, so that all of the info is a little more concentrated instead of scattered across an 80 page thread..)

RPF PREMIUM MEMBER
NostromoCrew Through research pays off. It could almost use its own thread!

joberg said:
Fantastic research and tutorial Love the final product and your wings are now a must to have for any Nostromo costume maker
Click to expand...

Thank you joberg ! I have more stuff in the works will share soon.

Amazing work. I've hand sewn all my stuff, I can only imagine how long those took to make.

I received mine and the pictures truly don't do them justice! Here's the wings I've been wearing on my jacket (standard patch embroidery from a random ebay seller) next to a pair of these hand-made beauties.

Hand-made quality that cannot be beaten.

kane2122 said:
Charlie, thanks for those great closeup shots! love the whole ensemble! your crew pants show that you don't have to spend a fortune to get great screen accuracy, that lady did a top notch job!
That navy jacket of yours looks fairly scuffed up and well used already and looks great beside the tropical shirt, fits perfectly into the Alien universe. And those boots look the part too! nicely scuffed and worn in, love the clever use of the nylon tubing and screws to make the D-ring holders.
Whatever makes you happy is the main thing!

I've looked for that damn elusive Aspen can label in the paper props section still can't find it?
Click to expand...

An eBay seller produces and vends excellent Aspen Beer full labels that are spot on, and fit 750 mL cans. I bought a couple However getting the proper cans for use, in America was troublesome. I eventually purchased through auctions the correct sized cans and the finished projects are great.

The eBay seller store is "propfiction", they are based in Great Britain.

The gold wings at the bottom of the image are from a vendor out of South America. Fun and funky, but... 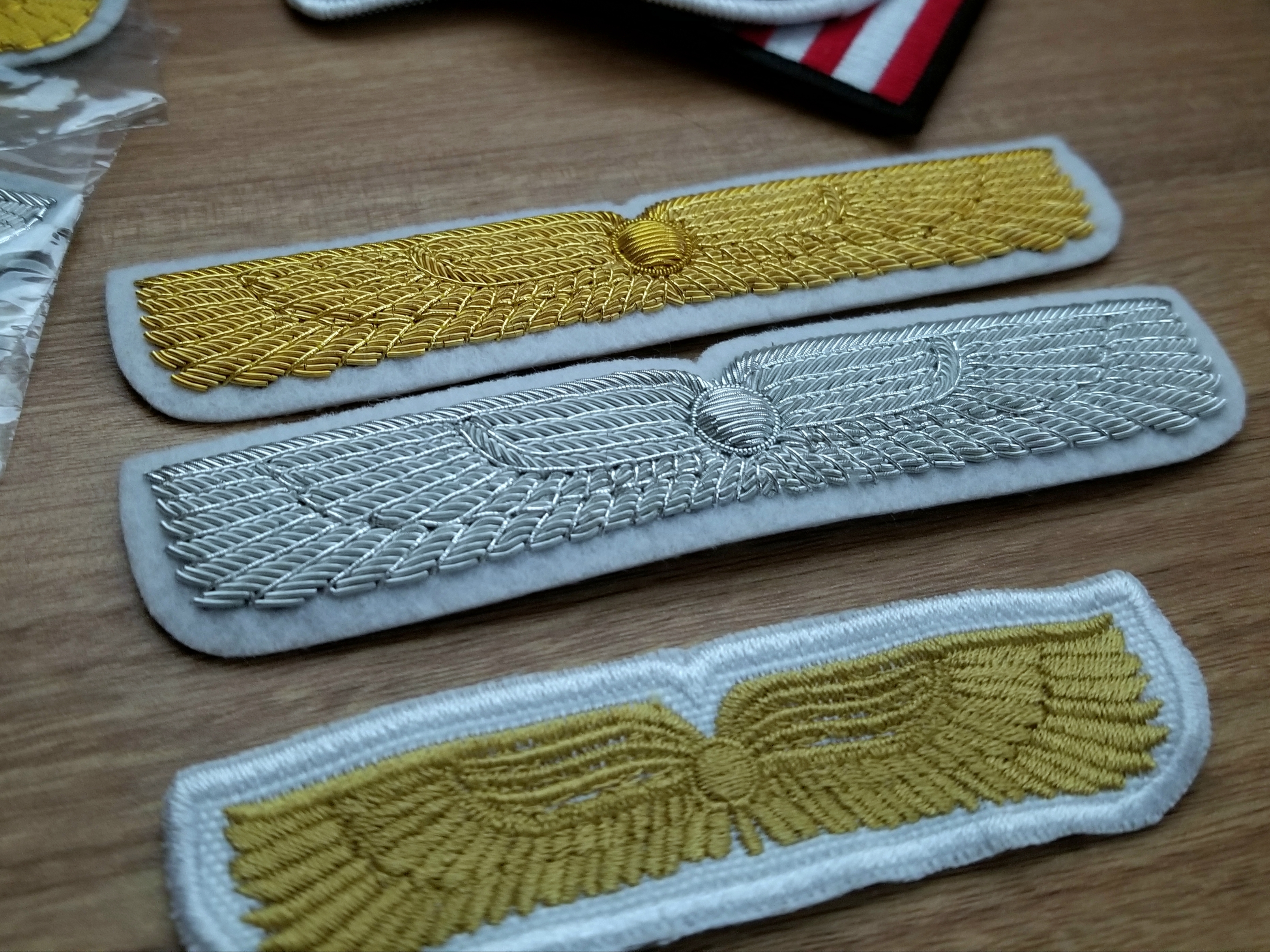 The gold wings at the bottom of the first image are from a vendor out of South America. Fun and funky, but...

Thank you rickhoward, I'm so glad you are happy with them!
That comparison picture of the machine sewn wings and my wings is the reason I've decided to go down this rabbit hole.. very pleased with the results!

Bits and Bobs for Nostromo Jacket