So I sort of got a scratch building itch the other day while I was watching David Lynch's Dune in HD for the first time...
This is my first scratch build. I've been at it for a few weeks and I think it's going pretty well.
I chose 200 as a scale, because I wanted a large model so that I could replicate a fair amount of the wonderful decorative gold detailing on this silver ship.

Thank you so much to everyone online who so generously shared various reference material for the ship. After a good few hours of googling I pretty much had everything I needed to start.
Someone online even got the original studio drawings for the ship (I will credit later when I remember where I got them- might even have been on RPF) but unfortunately they were so low res that I had to re-draw everything from scratch. Though I did realise that there are probably about 5 variations of the ship that was used for various shots in the movie, each with their own differences.
In the end I decided to model my shop after the hero shot of the large studio model that was used for the scene where the Atreides family disembarks on Dune.
I'm happy to share my drawings at a later stage when I've neatened them up a bit if anyone is interested.

From these plans I created a cardboard mock-up to check the drawings in 3d. Various adjustments had to be made to accommodate the curved hull segments, after which I made a final mock-up, which I could use to trace onto my building materials: balsa and styrene.

I've seen some models online of the ship where the hull segments are flat, but the front two, top and bottom rear segments are in fact curved.
I also realised I had to create a balsa support structure for the hull, but especially for the large and heavy wings what would be made of balsa wood.

Next time: the wings.

darn...if anyone can re-name this thread and correctly spell "Atreides", i'd appreciate it thanks!
A

I think you can do it by editing the first post. Great start, by the way!
C

thank you! I just found the advanced editing options
C

Ok this part is about the wings/nacelles...whatever those corn on the cob shaped things are called

After considering various ways of building this difficult shape, I decided to do it with balsa wood.
Each nacelle has ten round trenches, two deep trenches and one position for the wing. These trenches are divided by 13 walls that taper off towards the tips of the wings.
I had to shape each divider by gluing sheets of balsa together and then sanding them down to create the taper.
In the end each one goes form 6mm thing to 2mm thick.

I believe a great deal of the sets and models were construced using wood by local craftsmen in Mexico where the film was made. Their work gives the film its unique (if not universally liked) feel. It is fitting you are also using wood in your replica...
Regards, Robert
C

The panelling in styrene has been really tough. The front two sections have three or four levels of panelling, some with rounded corners. Missions!

Some more shots of the nacelle construction. The trenches will be filled with epoxy putty and smoothed to a concave round finish. 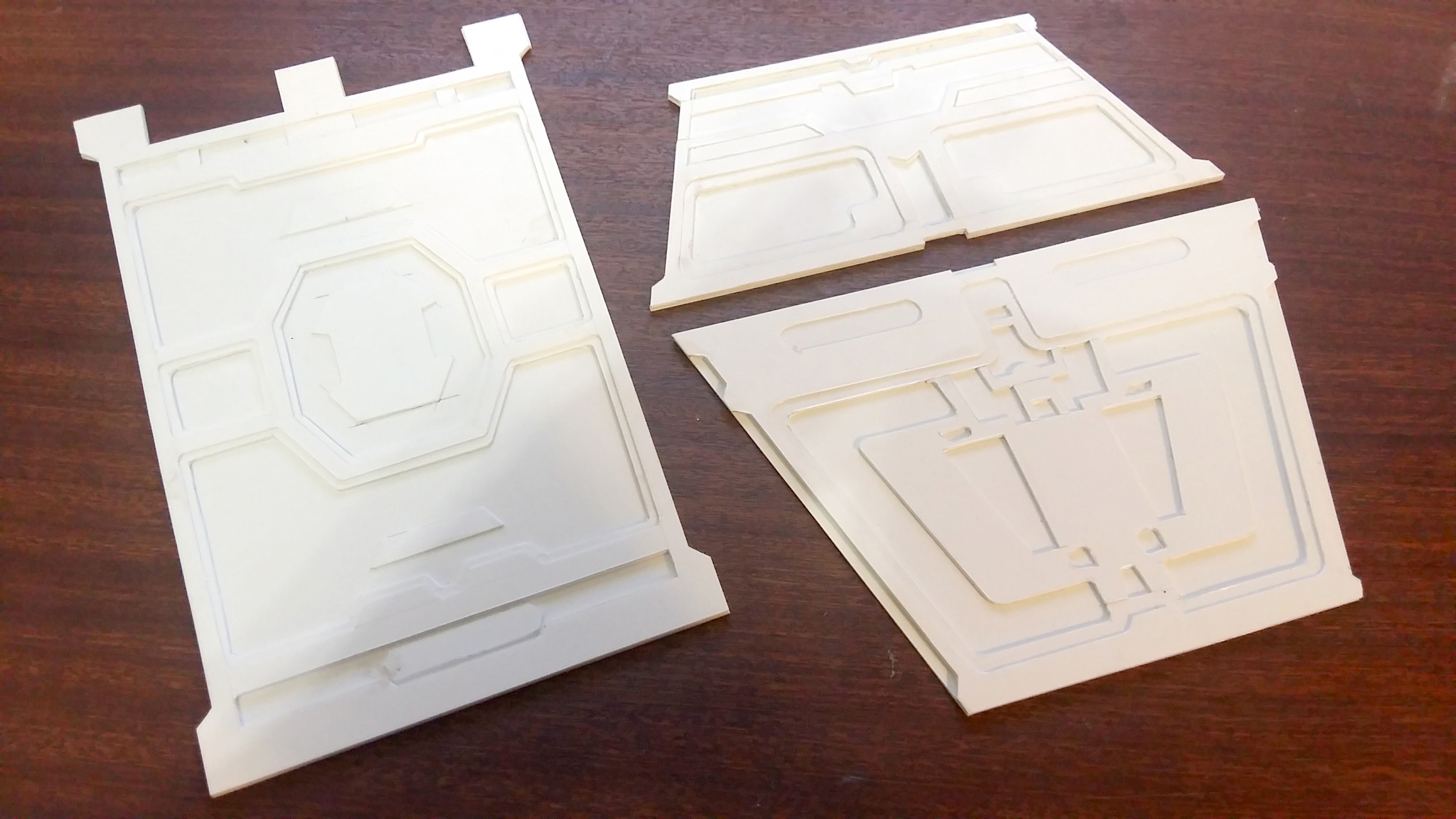 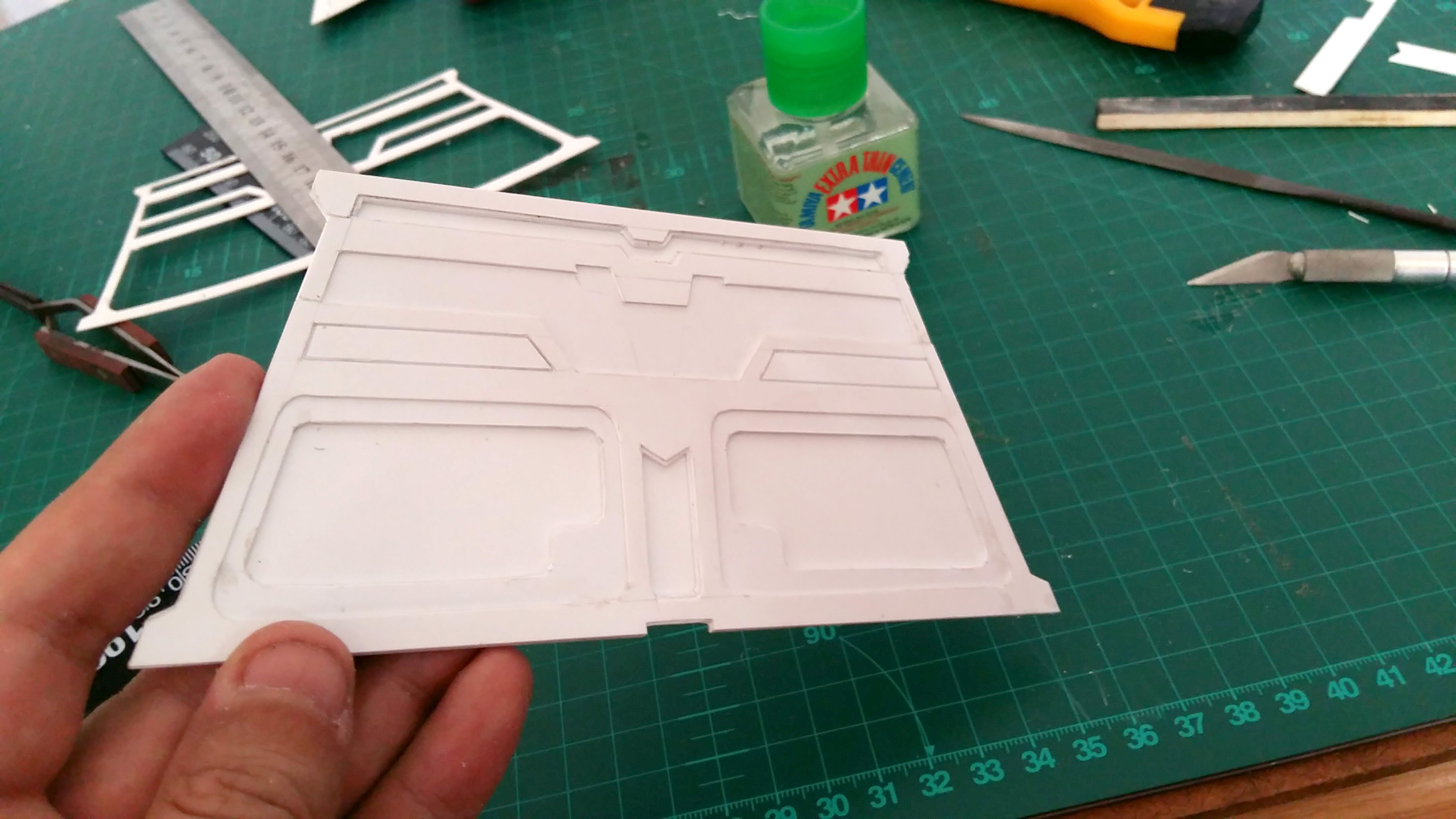 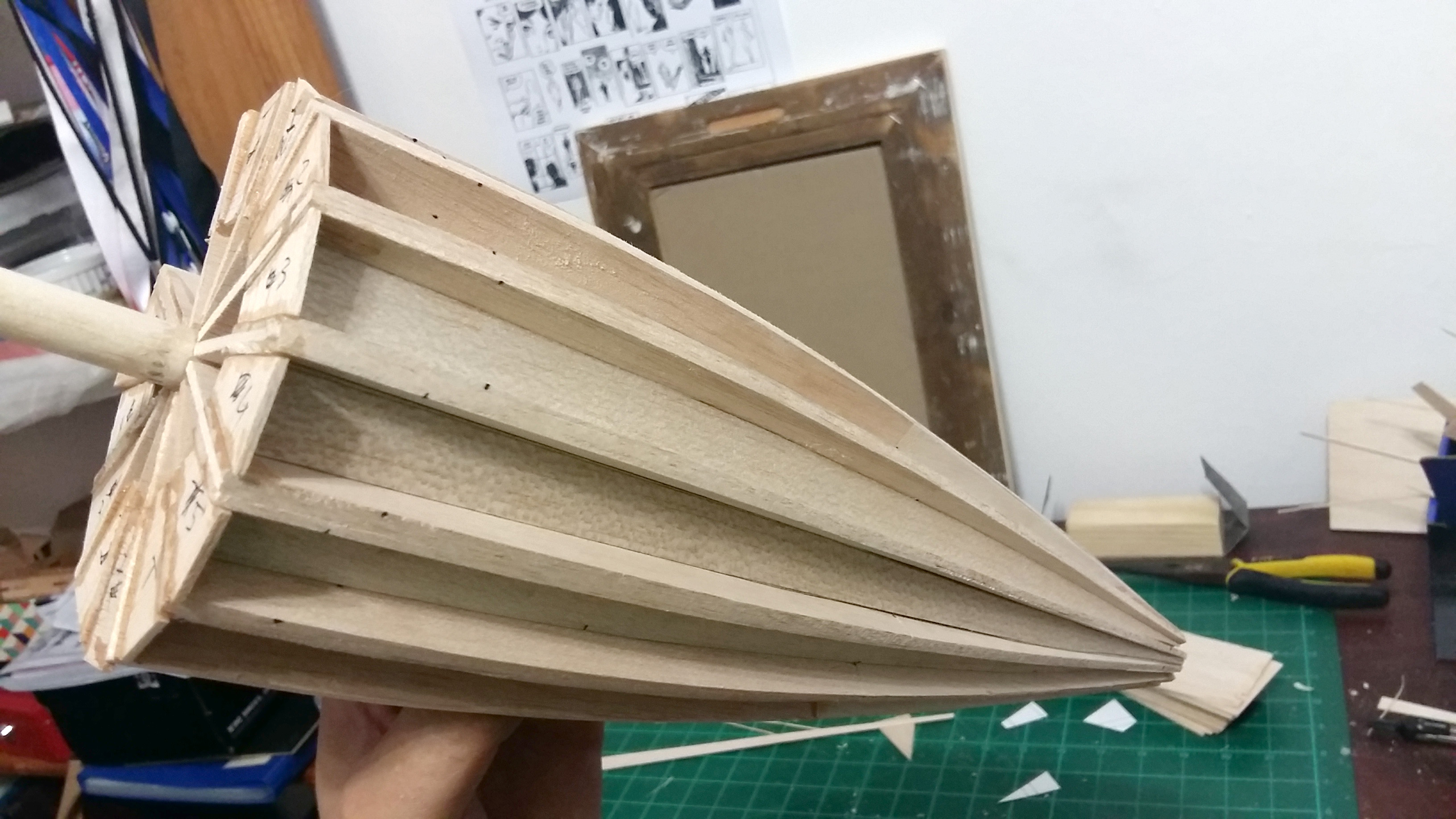 Awesome! I'll be watching this
C

Wings! The wings are made out of balsa. They have a compound curve, so I needed to make a rough frame and clad individual segments, instead of just bending a large pice of balsa for cladding.
I was pretty impressed with how well the wing fitted to the gap on the nacelle!
You can start to see the size now - 85cm tip to tip.

You are killing it, campingboy!
C

Some more progress pics.
All panels cut out, 90% detailed and glued onto the frame.
All windows drilled and some of the chamfers filled with epoxy putty and sanded.
I've sprayed the first coat of primer so that I can see the imperfection where I sand chamfers and other details.

Unfortunately I've had to make the decision to not light this model.
This is due to budgetary constraints, a lack of experience, but also , because the way I've built the nacelles and the frame will make it very difficult to light.

It's all good, one step at a time

So this is where I actually am now, so the WIP posts will come a bit slower form now on in

RPF PREMIUM MEMBER
Wow, it´s really refreshing to see such an obscure design being tackled!!! The "modern" materials make you forget that scratch building once was done by using wood and knives. Love it!

So far so good. Love the way you've used Balsa to make some fairly complicated forms...maybe you know it already, but you can use amonia to bend Balsa sheets to the shape you want. Keep up the great work.
C

DaddyfromNaboo - Thanks - I do tend to like more obscure designs, though my next model will probably be a 1:200 Klingon battle cruiser.
joberg - as in from Jo'berg? - thanks for the amonia tip - I thought you can just use water?

My first attempt to build the engine bays was a total fail because I had already attached the roof.
So I had to rip off the roof and rebuild the bays form scratch. Looking much better now.

Water is o.k. but straight amonia is better, really makes your wood go the form you want.

joberg said:
Water is o.k. but straight amonia is better, really makes your wood go the form you want.
Click to expand...

OT a bit, but is that just balsa or all types of wood?
Thanks! Regards, Robert
C

In the meantime, here's some progress on the retracted landing gear on the bottom of the hull.
I will still be detailing them quite a bit with dremelling.