This is me a few years ago wearing an original "Zardoz" Exterminator mask I got from Ardmore Studios in Ireland when they temporarily went bankrupt in the 1980s. The gun is a real Webley-Fosbury revolver I found in a military junk shop in Bristol and a friend of mine made the costume - I carved the bullets out of lengths of wooden dowelling. It's a good look, but not ideal for doing the weekend shopping or chillin' in public parks... 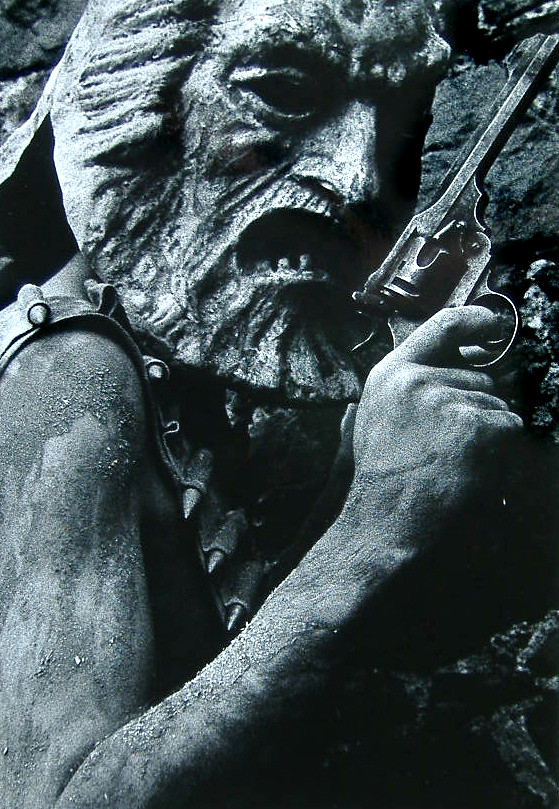 Ummmmm... drat, it looked OK on the Preview page. I used the "Insert Image" icon on the toolbar here - but should I have uploaded the photo to a separate picture hosting site or something?


Computers are witchcraft to me but I think you do upload to a hosting site and then link.

Do you still have the mask?

Hi Apollo and Cunningham - are you receiving me now? Thanks for the advice. I joined Flickr, uploaded the pic, clicked on "Share" and put the "BBCode" into my text here. Yes, I still have the mask - best thing I own! 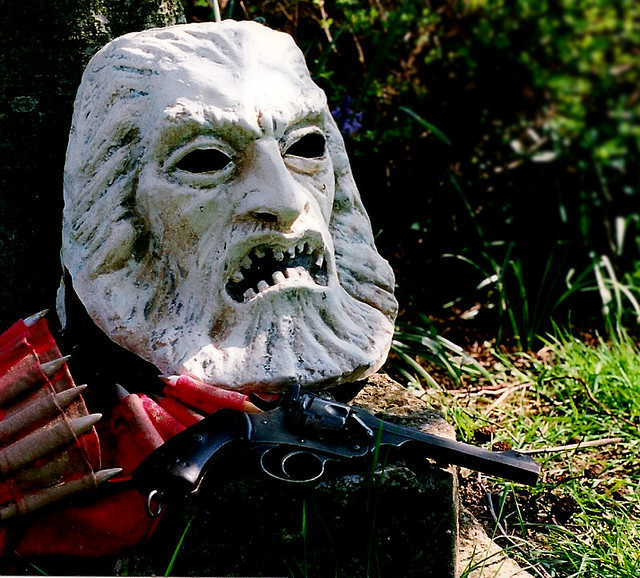 RPF PREMIUM MEMBER
Pics are up!

Nice find, Is it fiberglass?

No, they sculpted a single face in plaster, then vacu-formed the masks in a thin grey plastic, putting the face on the front and back. It IS a strange film. The Exterminators were supposed to be all in mucky grey colours, but at the last minute the masks were painted white, then red for later scenes.

Who can ever forgot seeing Sean Connery in this costume...

RPF PREMIUM MEMBER
Rumor was he would run around set saying, "Who's your diaper daddy! ? " 3 times really fast!

These used to show up all the time on eBay, supposedly cast from original.

Haunted Studios sell / sold these on Ebay and on their site.

They have previous for recasting a sculpt made by a board member on here years ago and selling copies.

To be fair when the board member pulled them up for using his sculpt they said they had bought it from a 3rd party in good faith, apologised and never sold them again.

If it isn't them then please ignore this post

Chris, I have no way to "prove" that Haunted Studios recast my casting. I knew the managing director of Ardmore studios (cos I lived in Ireland and I used to write to him asking about summer jobs when I was a kid). In the late 70s I visited the Studios and was shown around, and I saw several tea-crates with these Zardoz masks piled into them. In the 80s the place went bankrupt and I wrote to the guy and asked if he'd pick one of these things up for me as he left. Amazingly, he did - I got two broken halves. I had to take a while repairing the thin plastic faces and joining them together, repaint it, etc. Each mask had slight differences - the original props people cut out the eye holes and nostrils with sharp knives and weren't too careful how they did it, and the faces got distorted a bit when the two sides were originally joined together - when I compare the Haunted Studios cast with my original, these distinguishing details are absolutely identical. I emailed them a couple of times to ask how they got hold of an "original mask", but nobody answered. I'm not making a big thing about it, I was just disappointed to get recast and lose the little bit of money I was making on it.
L

Contec said:
Who can ever forgot seeing Sean Connery in this costume...
View attachment 483049
Click to expand...

Contec said:
Who can ever forgot seeing Sean Connery in this costume...
View attachment 483049
Click to expand...

I am new here but I have been searching for months all over the web to try to find a wearable Zardoz mask. None on ebay and I did even contact Haunted Studios because they came up in the google search, but they don't have a wearable one any longer, just one to hang on the wall. I've come across pics of a bunch of people at a DragonCon convention all with masks, but there is no way to contact any of those people to see where they got theirs as the pics were uploaded by spectators. I have no idea how to do a plaster casting or any of that, and I am not trying to steal your mold, I just really want to get a mask for upcoming Halloween here in the states. There's a big street Carnival in my town every Halloween,, and i want to go as an exterminator. Would you be willing to make another cast off your original? I know it's not cheap so I'd pay, and also shipping to California (I assume you are in Europe), of course. I just don't know where else to look for one. I've googled so many times and the same stuff comes up (nothing helpful) until today and this group and your posts showed up on the first page of google search for "wearable zardoz mask". I understand if you don't want to as I'm sure it's an ordeal, but I would really appreciate any help. You can answer here or by PM (I assume this site has PM) if you like. I would pay in advance, of course. Thanks.