The TE that ALMOST was... BIG photos!

As a buddy of TE I wanted to show off what his abilities are. Sadly, some ruined it for all. Removed due to too many smart alec comments and people ripping into the man. You all making snide remarks dont deserve such a fine automobile.

Yeah, 3D scanned. A little bird told me someone might eventually be making these, though.

The Holy Grail of Trooper Helms. (besides owning the real deal)

I am not a helmet guy by any means, but that is an absolutely beautiful piece :thumbsup .

If it ever became available, it might the one and only bucket I would consider.

TE outdone himself on that one.

how was it made?

is it one piece?

love to see it finished...

Not sure about the flat spots, but this is a laser scan from TE's 2nd helmet. It was identified on screen as the trooper that says "there's one set for stun".
J

Not sure about the flat spots, but this is a laser scan from TE's 2nd helmet. It was identified on screen as the trooper that says "there's one set for stun".

From the mouth of TE as I can best translate it: "The film helmets are NOT perfectly round at the bottom of the helmets. I feel that the HDPE was used for one purpose over another and it is this: the plastic can be heated and wont shrink or slag out when used to basically heat and then manipulate the parts together to get them to fit. In doing so, some areas are flattened out at the bottom underneath. This is why there are no replcias that are dead on. Not the Gino (and it is WAY OFF anyway) not the TE1, not the others."

So, thats the best way I can describe as to what he is saying. in laymens terms I think it is safe to say they heated and made parts fit since they did not right off of the molds. Thus creating flat spots and squsihed areas.

There was photo's of the prototype of this and some of the fibreglass version on www.sandtrooper.net if anyone wants to jump over join those filthy troopers and have a look.

I wish this was an interest thread rather than 'look what you'll never have..'

That is a beauty. Now, if someone would only do a laser scan of the Boushh helmet, I would be elated.

Is it just me? Facing the helmet, there are 5 teeth on the right and only 4 teeth on the left. Is this correct for this particular helmet? as we know some have only 4 on both sides, and others have 5 on both sides....

Originally posted by Jumpin Jax@Jan 27 2006, 09:59 PM
Sadly since TE has left the hobby, this is the ONLY helmet likely to ever be made.Â

Fine if you want a paperweight, but if you want an accurate Stormtrooper helmet better contact GINO, AA etc. - or wait a couple of weeks until TE comes out of retirement... again. :rolleyes

Community Staff
OK, I want to preface all I am about to say by stating that I am making these points because I detest inaccuracy and opinion that is posted as "fact." Too often things are stated as fact with no proof to back it up and if it is said often enough everyone simply begins to believe it IS fact. this is how props myths like the Obi-Wan "motorcycle grip" and "lawnmower gear" are born. We already have enough problems and issues among trooper helmet enthusiasts without adding more confusion to the mix. I am NOT trying to start a fight here, just squashing fallacies.

This is simply untrue. First, this helmet was made via realscan. Rescan technology is not perfect and is prone to some error not only in the scanning but in the cutting of the part. Also, the original material this was made from was a foam that was very pourous with a grainy, sandlike surface which had to be filled and smoothed and sanded. You could also see a seam line across the dome on the original bust that had to be taken care of. Additionally, here are a few quotes in regard to the creation of the original bust:

"the laser pics up the detail, but sadly the bit used to cut the parts is bigger than the detail areas are sometime"

"you have to guess as to how deep the detail needs to be since the bit only scathed the surface and left where it goes... not everywhere, but in some spots"

Aside from all of that, this was to be a one piece, fiberglass helmet, with all the detail molded in, including the rubber brow trim. 100% identical? This would have been much closer, in term of build, to what MR is producing. It might LOOK very similar to the real thing due to the amazing abilities of the realscan technology, but it would have been nowhere near "100% identical."

Nothing on this helmet was changed.[/b]
Click to expand...

This is also untrue. Setting aside the fact that the entire surface had to be smoothed and sanded, I talked to Matt about a difference I saw in the bust and he openly admitted they had to make a correction. Here is our abridged IM conversation:

Braks Buddy: the details in your real scan casting looks considerably sharper than the real helmet it came from

TE: no not really

Braks Buddy: well then, the pic above is VERY misleading

TE: are you speaking of the detail above the vocoder?

TE: the lip there?

Braks Buddy: it looks considerbly sharper than on the original helmet

TE: that area had a small issue with it being chunked when the bit passed

TE: sadly this is the best we could do to salvage it
TE: the machine made a boo boo

TE: but it captures the essence

What I noticed was that the lip above the vocoder was extremely sharp on the bust while it was not nearly as sharp on the original helmet. If the bust was JUST like the original and nothing was changed this area wouldn't be SHARPER than the original, but it is and Matt explained in the IM conv posted above why that is. The point being, changes WERE made. I will not make any assumptions about other changes but I do know that all realscans have to be cleaned and descrepanices corrected.

You are right. You could. The problem is that from what I see you couldn't on the Dave M helmet from which this bust was scanned. The original does not appear (to me) to be as sharp as the bust and it seems to me (again, my opinion) that not only are the individual vocoder ridges, on the original, thicker, but that the troughs are not as thick and not as deep, as if someone has sharpened them, taking material off the ridges while deepening the troughs. But don't take my word for it. Decide for yourself. 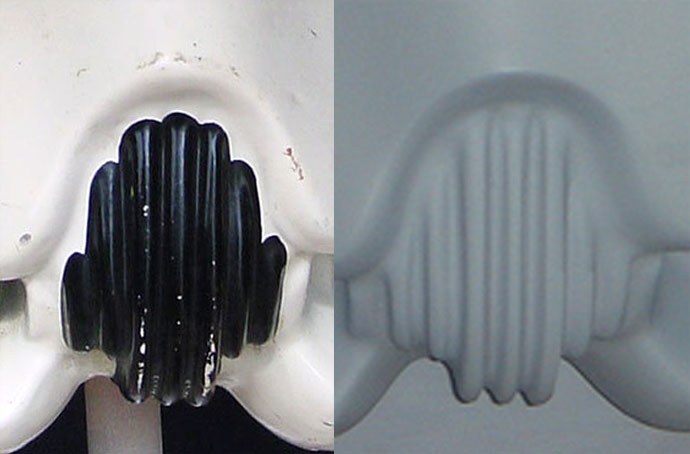 You can also see in the image above the change to the hood over the vocoder due to the machining error.

It may sound like I am just trouncing this helmet or trying to make it look bad. That is not the case at all. It is an AMAZING bust and in many ways you would never be able to get something closer to the "Set for Stun" helmet. However, to state that it is EXACTLY like the helmet it came from (100% identical) and to say that nothing was changed simply is no more true than AA's original claims that his helmets were from the original untouched molds... Scary to see that parallel surfacing here.

If this helmet is ever produced, I am sure that there will be many people happy to line up to purchase it and will be proud and thrilled to own it as they should be, but lets keep facts and opinions seperated.

RPF PREMIUM MEMBER
thats where I left my helmet in the bathroom..thanks for finding it..

i'd wait for the symetrical version

Only Murders In the Building (spoilers)