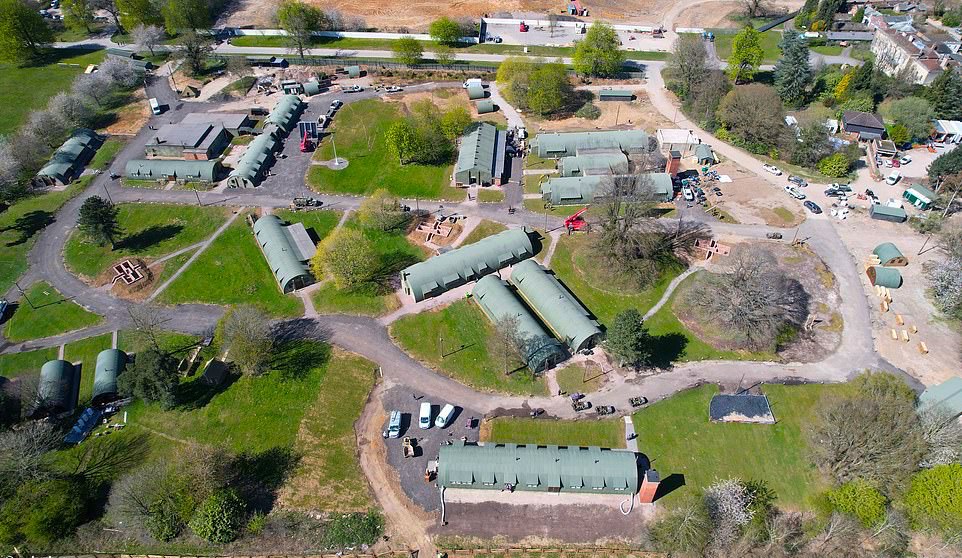 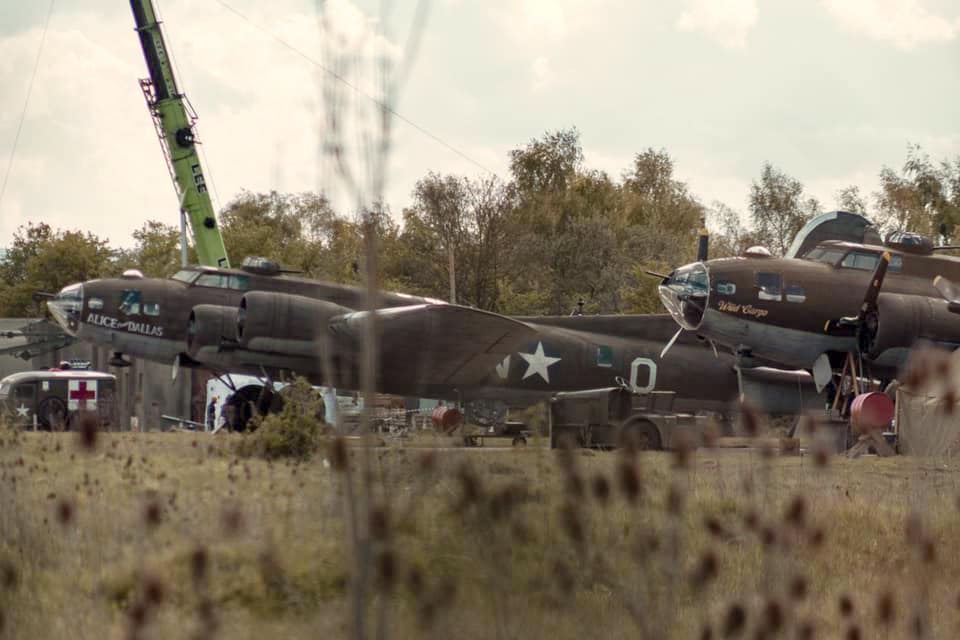 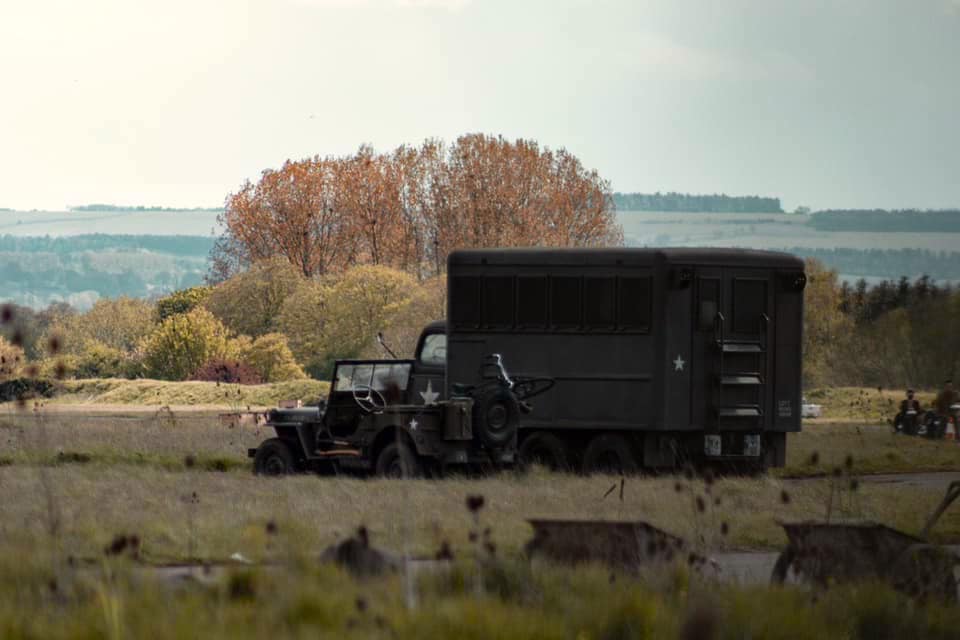 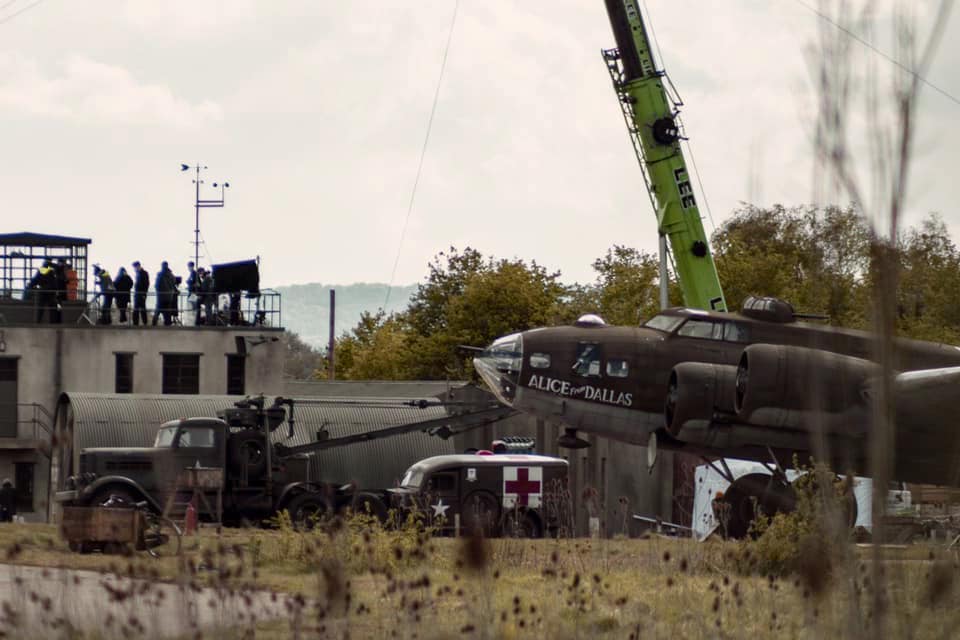 The Bloody 100th.
This is gonna be intense.

Inquisitor Peregrinus said:
Oh, I got all that. *chuckle* Have had for ages. What I've never found anywhere are pictures of that aircraft.

43-37665 "Lassie Come Home" (one of several with that name -- G.I.s were not necessarily all original thinkers)

Manufactured by Boeing, rather than any of the subsidiaries. Delivered to the AAF May 1944. First assigned 551stBS/385thBG. Transferred to 510th/351st June 1944. Radio callsign TU-N. Assigned to 1st Lieutenant Jim Blaney (my granddad) 1st February 1945, formation leader and deputy squadron commander. He flew most of his thirty-odd missions in that plane, before the relief crew botched it in March. The engine fire spread to the bomb load, and the resulting explosion also damaged the aircraft to each side. He had no particular attachment to the several aircraft he flew for the remainder of his tour.

That's him, squatting on the left, with his aircrew. I have pictures of him riding his bike on-base, hanging out with his bunkmate, etc. Just nothing of the actual aircraft, from him or anyone else that I've ever been able to find. It's infuriating.
Click to expand...

43-37665 puts it in the last block of B-17-Gs built by Boeing. 1,099 were built in that block, which makes it the single biggest production block of Gs, across all manufacturers.
Source: Flying Fortress, by Edward Jablonski.

That's all I've got. Can't find any mention of missing cheek blisters, nor any pictures of Gs without them.
But it was among the last built by Boeing, so maybe they had decided to phase out the cheek guns? Just speculation on my part.
Douglass and Vega continued building Gs after Boeing ceased production. Looks like around 3,000, altogether.

And while I'm here, adding up the numbers of these production blocks, it looks like a total of 12,085 B-17s (F and G) were built and delivered to the USAAF.

For the timeframe I think they're having this for, mid-production F models would the latest the 100th BG had.
Wow, those mockups look great, I wonder how many, just these two?
The newer "Catch 22" series showed you don't need many real planes to make it look right, if you do the CGI correctly. I just hope they do the flight characteristics correctly and not have them zipping around like Star Wars spacecraft.

p51 said:
... if you do the CGI correctly. I just hope they do the flight characteristics correctly and not have them zipping around like Star Wars spacecraft.
Click to expand...

Agreed. 'Red Tails' forgot about physics and went WAY overboard with the CGI dogfights. I'm really looking forward to this show, though.

Yeah it's a shame that they haven't had a good movie based on the Tuskegee Airmen. Both movies were kind of bad. I do like that we get the correct planes now and we don't have T6 Texans dressed up as Zeroes like in the old 40s-70s movies. They need to have some aircraft advisors on these to get the physics right though.

Sluis Van Shipyards said:
Yeah it's a shame that they haven't had a good movie based on the Tuskegee Airmen. Both movies were kind of bad. I do like that we get the correct planes now and we don't have T6 Texans dressed up as Zeroes like in the old 40s-70s movies. They need to have some aircraft advisors on these to get the physics right though.
Click to expand...

Ain't that the truth. All that money and computing power, and the Redtails makers don't have the sense to show the props feathered on a stopped engine. Besides the interminable video game action, they totally missed the boat in terms of the opportunity to mine the drama and historical significance of the Tuskegee airmen.

The HBO show did better in each regard but of course was much tighter on its budget.

I only managed like 10 or 15 minutes of Red Tails. Didn't even get to the fighter action. The screenplay and dialog were so insufferable I turned it off and took it back to the Redbox.

That excellent bit of buzz job flying was from the Steve McQueen movie, "The War Lover," which isn't a bad movie. Lots of great B-17 action and I think they had 4 flyable B-17s at the time they filmed it in the UK.
In the 90s, I would volunteer to help out of the Collings Foundation folks whenever they came to my hometown in Florida, and after a couple of years, I'd get flights to the next stop (usually Panama City, FL). One year, I flew on the B-17 "909" and we buzzed the airport at Fort Walton, FL. I was in the bombardier's nose at that point, something really amazing to experience.
Here is a compilation of some of those flights when I had a video camera with me:
Sadly, the "909" crashed and burned at Bradley International Airport in October of 2019, killing seven people. 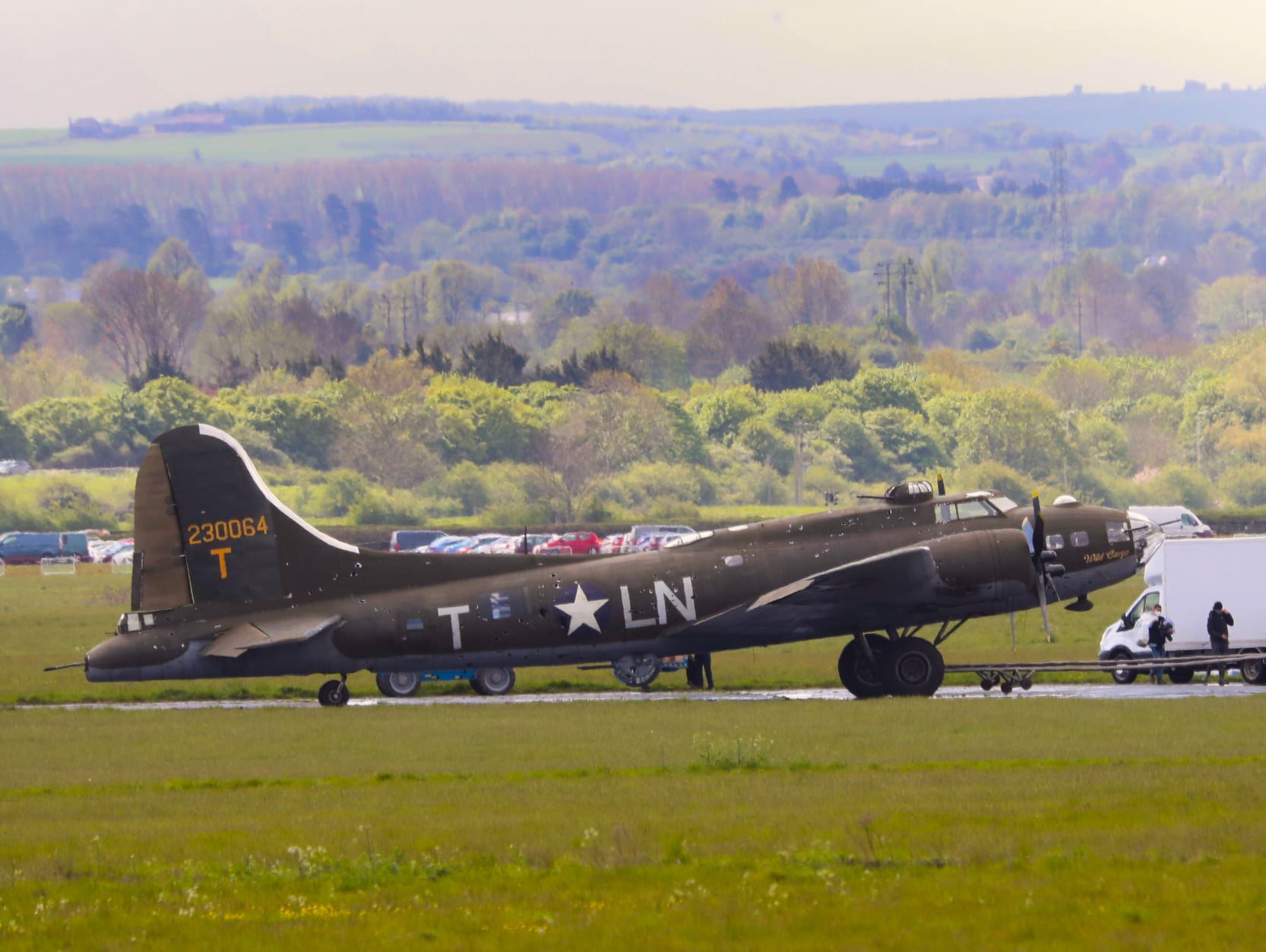 Any news from the set?

RPF PREMIUM MEMBER
No where near the set but connected with some who are. One from this past week. Echoes of the Memphis Belle film. 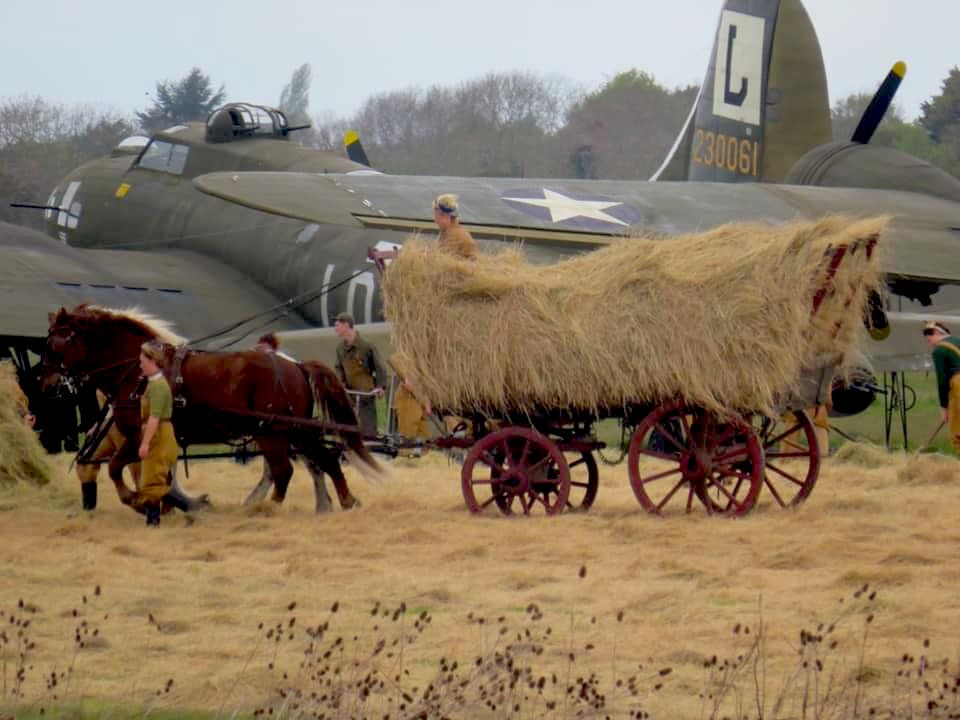 RPF PREMIUM MEMBER
Pretty crazy to see them out in the wild like that. 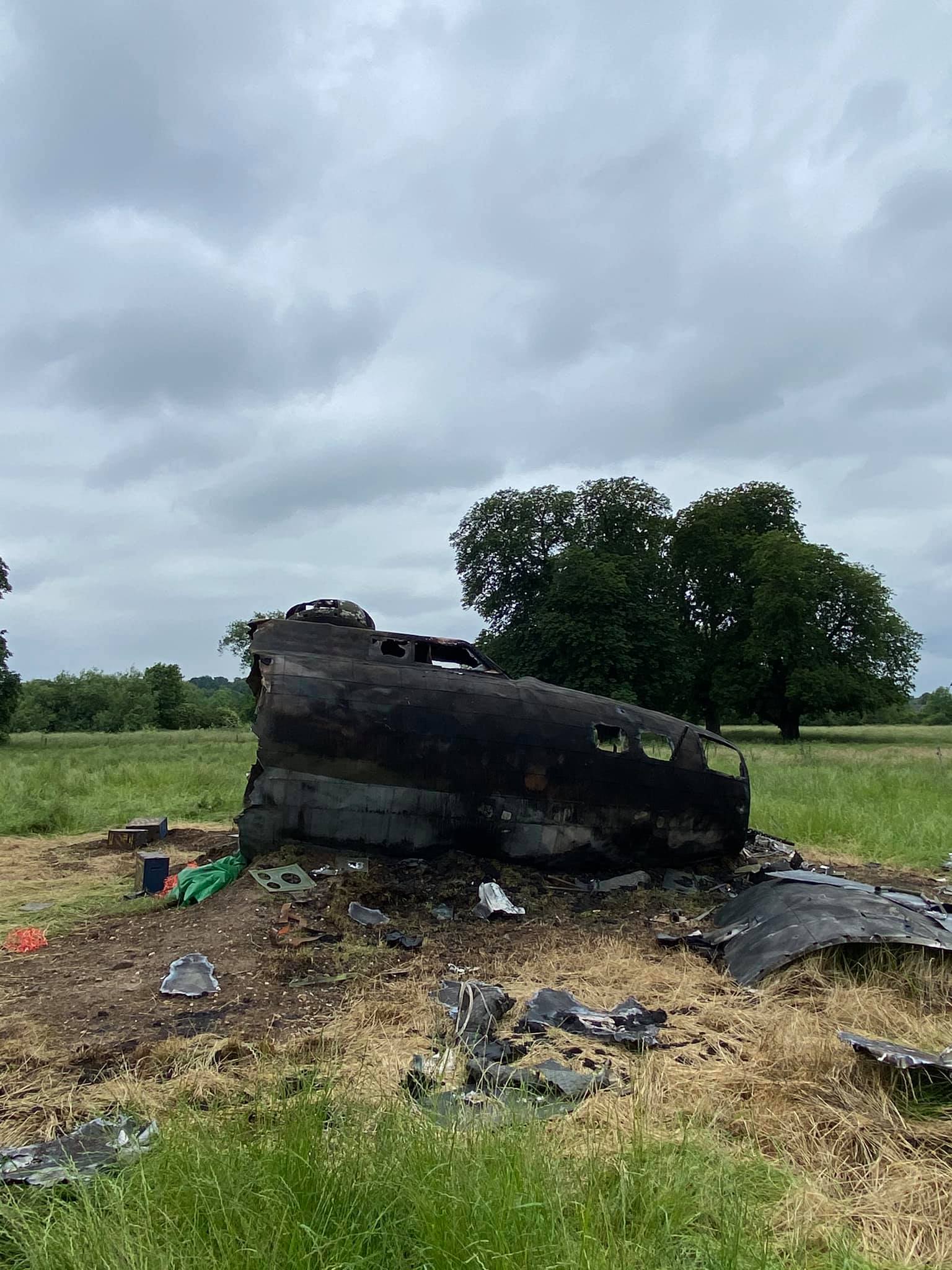 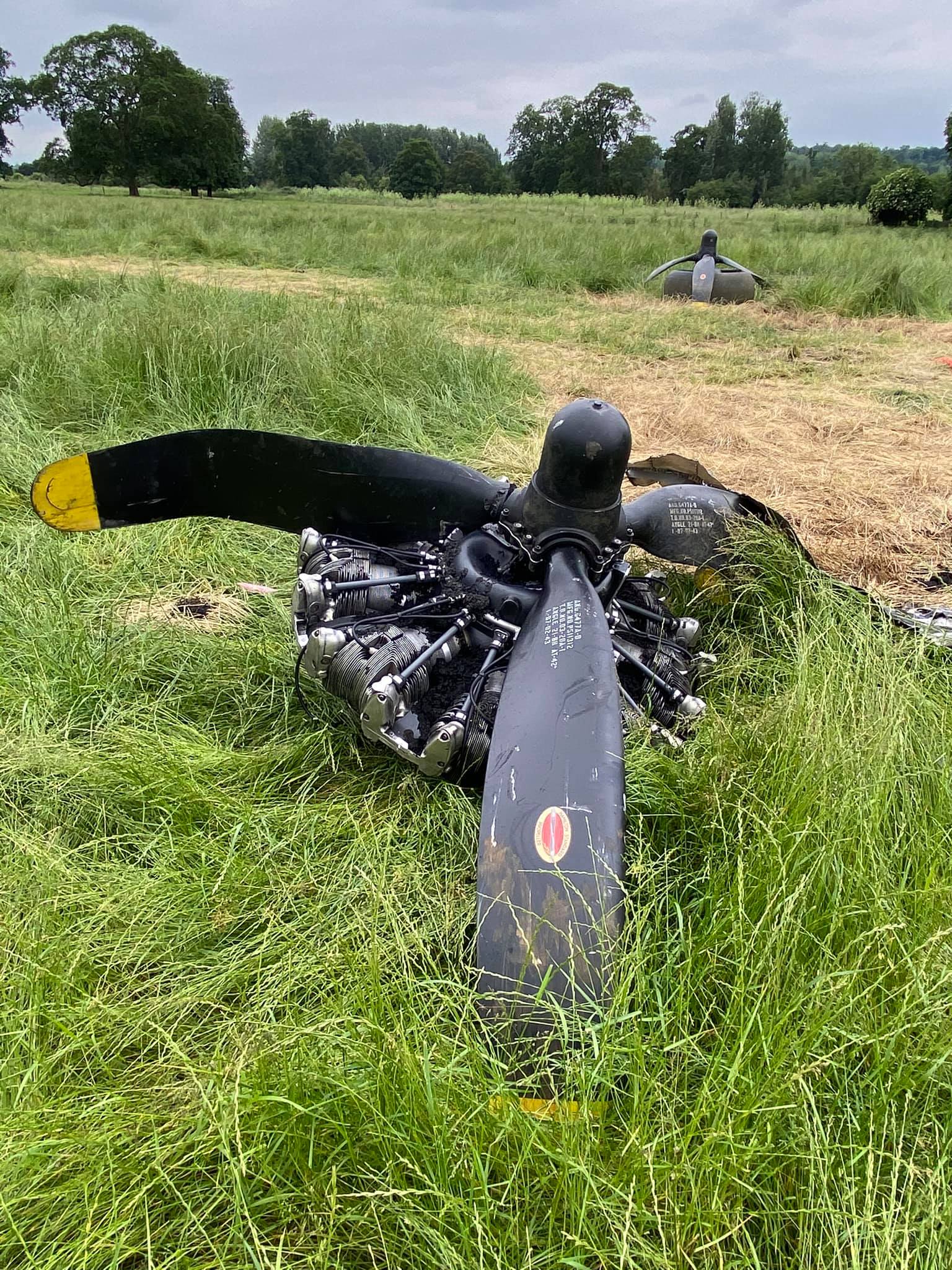 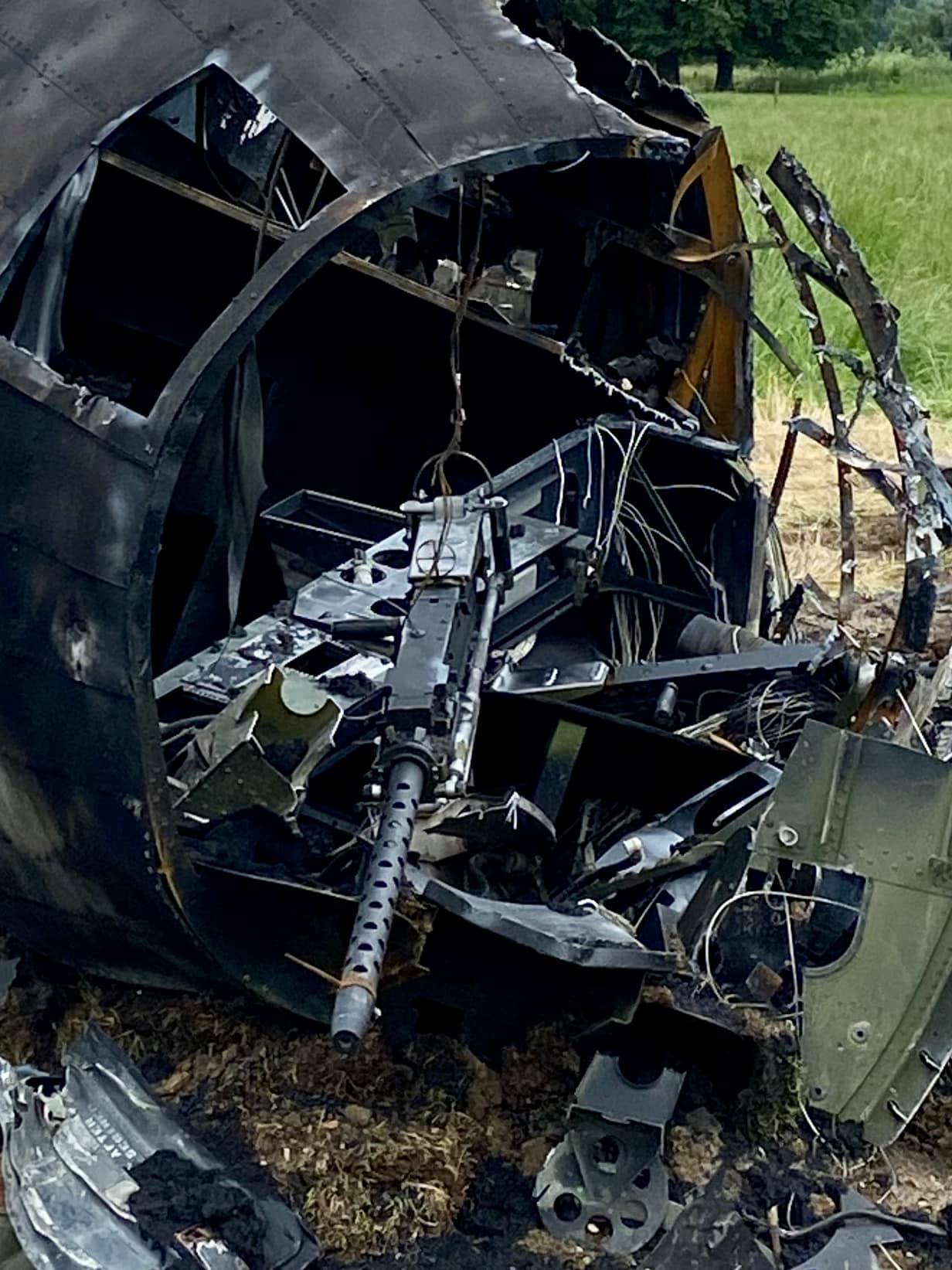 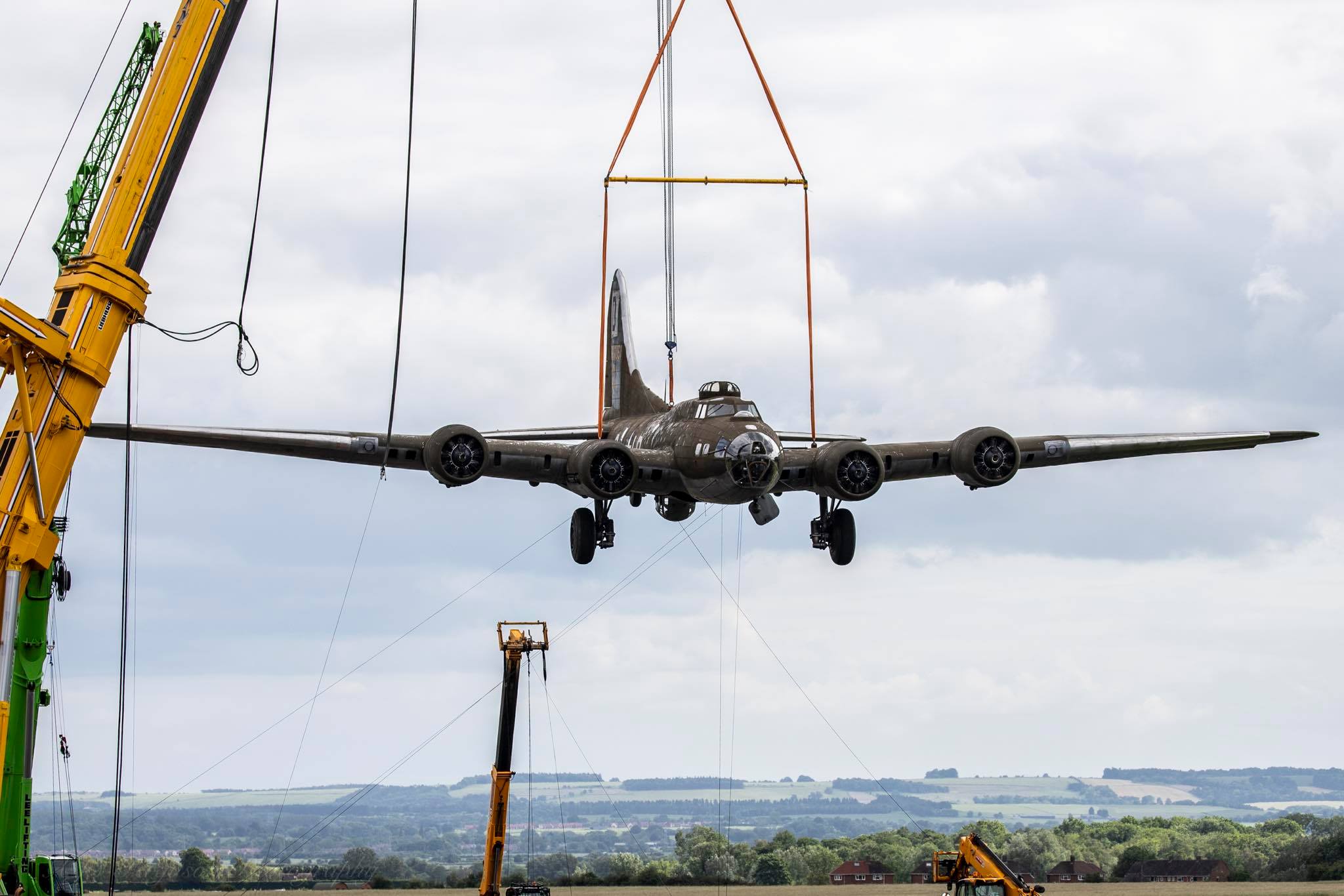 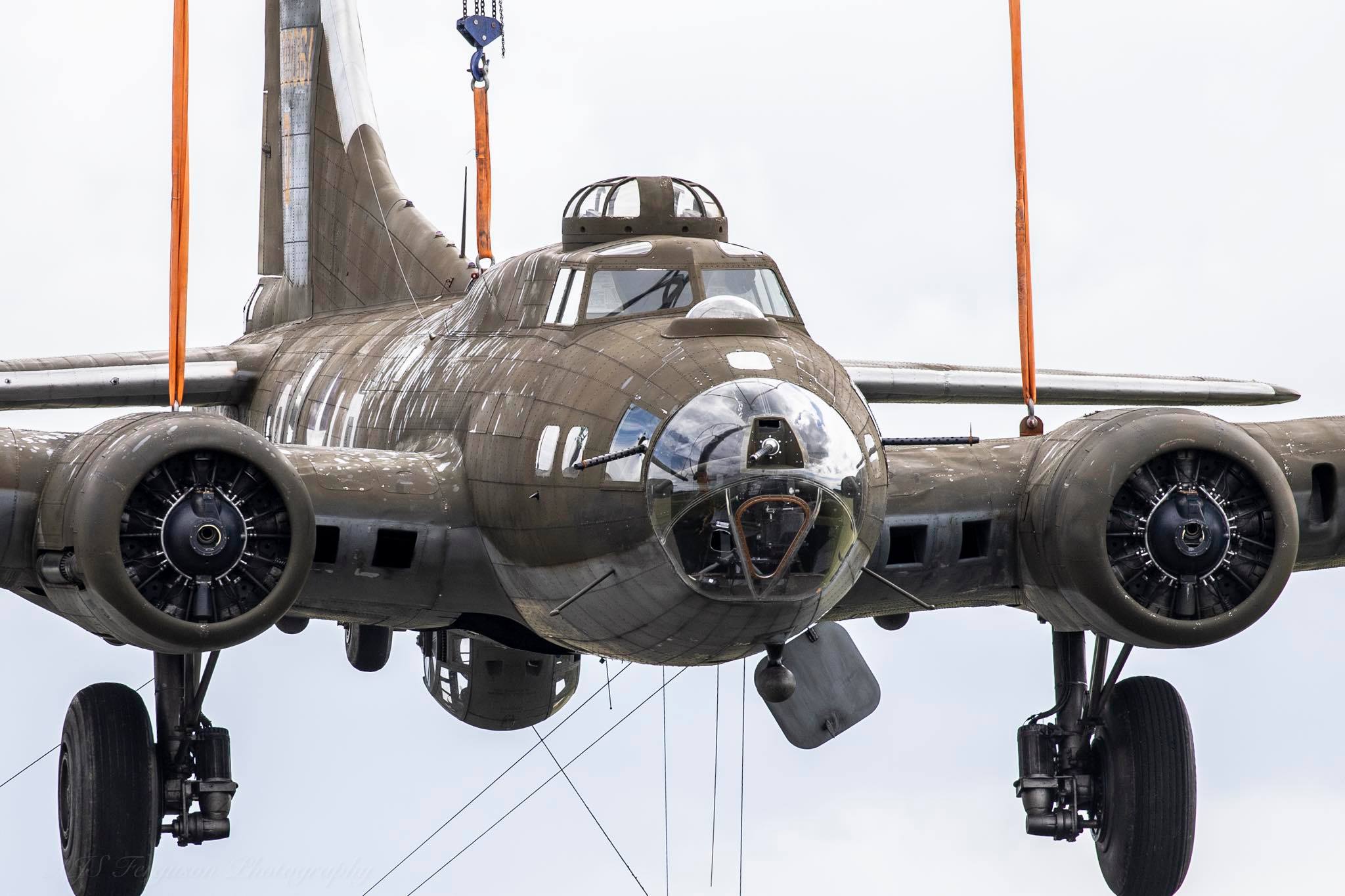 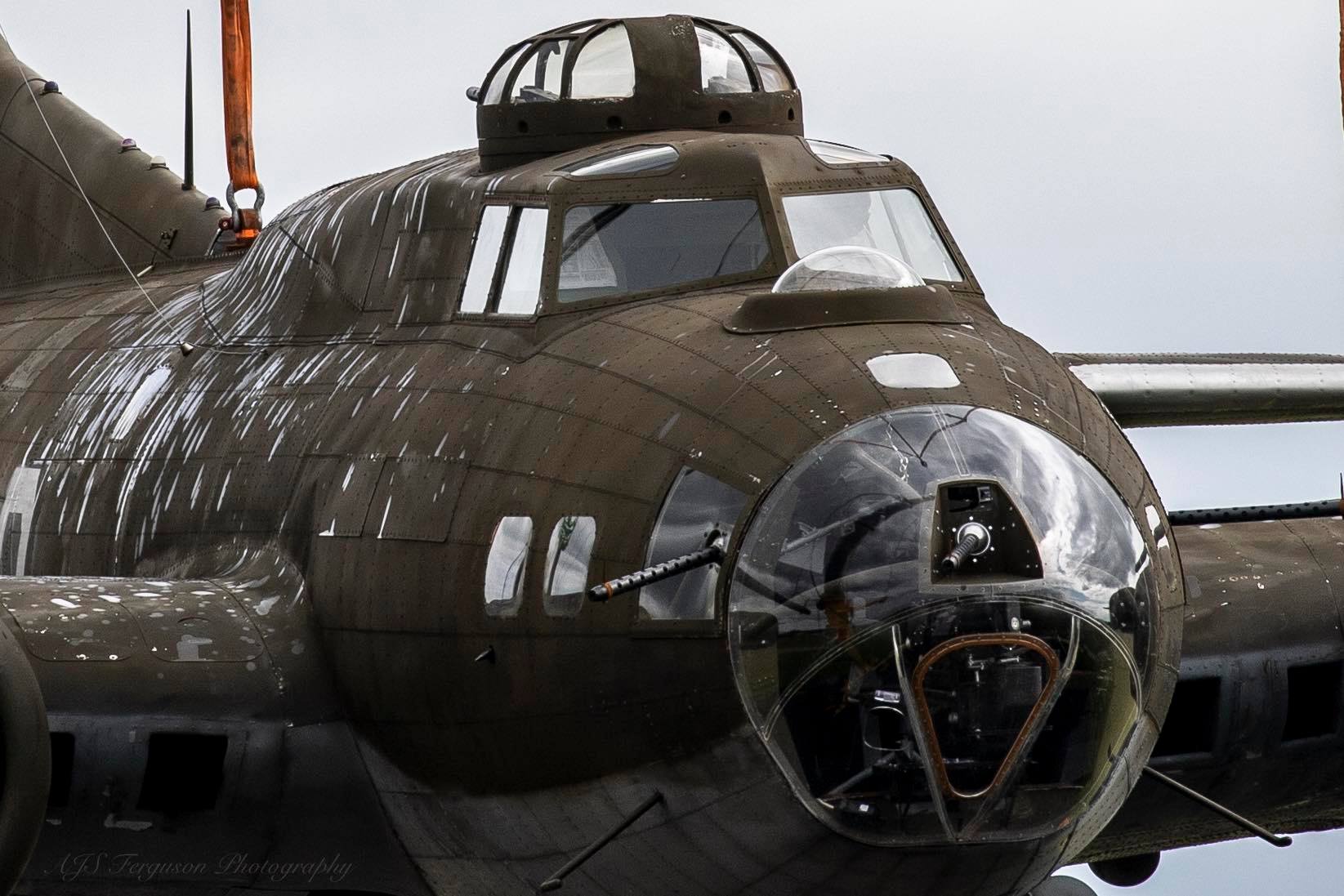 As amazing as that full size B-17F model is, I'm quite confused as to what's happening there. I do get why there are no props hung on the models so they can put CGI spinning props in place, what's up with the 'frozen in place' suspension of the mockup? Clearly they don't intend to making it look like a vertical takeoff variant, so what benefit do they get form hoisting it into the air? From the guide lines, it looks like it's to hang in one spot, so what benefit do they get from that? The first thing I was thinking was maybe they intended to film a takeoff scene with the suspension lifting slowly while moving forward at the same time (which I couldn't imagine how you could do that correctly), but the wires underneath seem to support it's frozen in one spot.
If they intended on a scene with the actors in place, wouldn't it be easier to do like "Memphis Belle" movie did and make a cockpit that could be moved around on it's own?
Also, the flaps aren't set for either takeoff or handling and the crew hatch is open (and I think I might see someone in the commander/pilot's seat). Looks like she's configured for straight flight, but has the gear down.
I'm dying to hear the story behind this.
One other thing, what's up with what looks like white paint splotched all over the top of it, from behind the co-pilot's window to just aft of the radio operator's upper window?

75% of the CW network given away for free to get rid of it!