SS Model Builders, I need your help - reward for find.

trooper said:
Art, I never received a reply to a pm I sent you. can you please take a second and bounce back ?
Click to expand...

I don't have a PM from you... not good. You are the 2nd person who says they sent a PM but I don't have it.

RPF PREMIUM MEMBER
that's weird I just looked in my sent folder, there's no record of it, i'll pm you again, sorry to bug you here...

I just spent an hour googling slot car controllers and drills of the 70s and 80s and got nothing.

I guess I could have spent the same amount of time with some milliput and actually built something that looked pretty much the same anyway.

Sorry to dredge this up as my first post, but I came across this thread...I don't even remember how. I've never even seen the movie. I searched and searched and realized this is still unresolved.

I can tell you that the part you are looking for is not a single part. It's 3-4 parts. The grill seems to have been narrowed. There are cut and glue marks on both examples shown. The mounting tabs are fabricated, not part of any of the parts. I have a hunch that the grill comes from an appliance or radio. I swear I've seen that exact profile before. 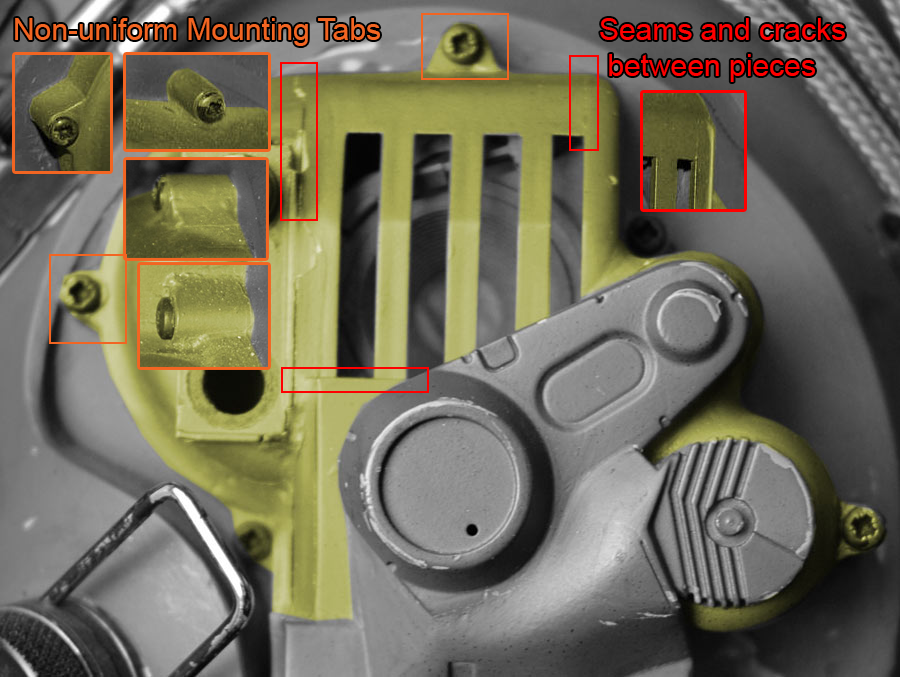 Here's what I think might be the construct of the parts. 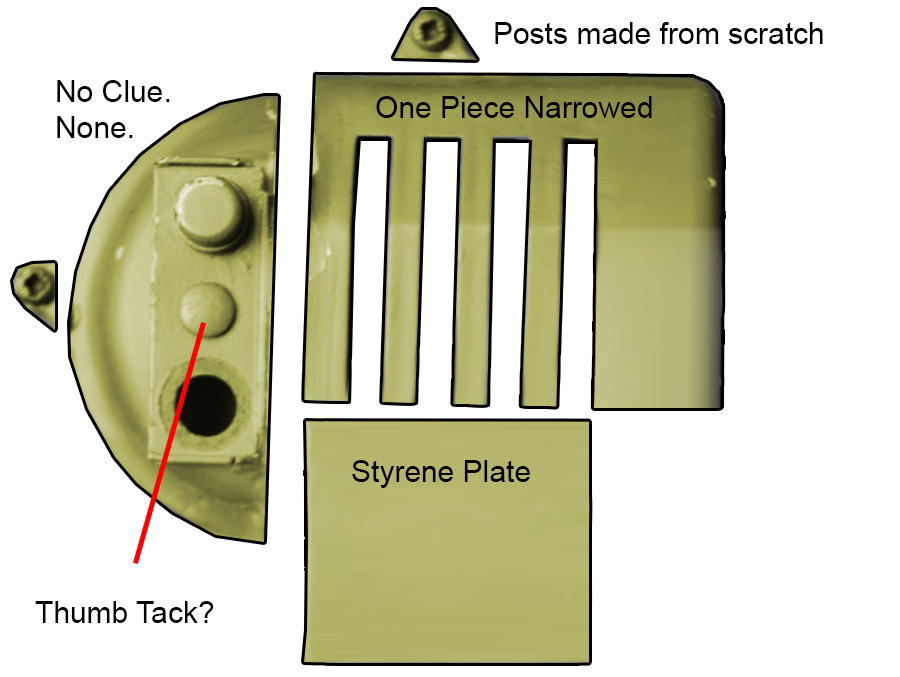 I think the Grill was part of the case of something. The far right opening is narrower than the others. It has a seam line, joining up to the endcap. The endcap definitely belongs to the grill. It has the exact same profiles. The shape I show in the picture is just a guess as to what it originally looked like. I'm assuming they chopped it down because it was too wide. Since there is a seam at that spot, there must've been more material or some other construct on the original piece that wouldn't look good. Hence, the wide spot.

The box on top of the round part at left is almost certainly part of it. The joint where the two meet is perfectly uniform, seen here. I really think that the little cap over the middle hole is a silver thumb tack.

Grill:
Possibly from an intercom? Power Supply? Radio? I could almost bet it's something that used a large transformer. That, or it contained a rheostat.

edit: oh, and the ring around the hole? Whatever was glued on there got knocked off of both of them by the Mic boom.

I agree with Lee S. It definitely looks like a controller off a slot car. An old one most likely by the evidence of wide slots for heat dispersion. Nowadays the controllers are more enclosed.

Some good observations DanielWGK! Not sure you are right, but your ideas are very valid and may help figure this one out.
Last edited by a moderator: Nov 8, 2018

Hi, everyone. I have been looking for this since last night. I came really close looking at cylinder heads. The following pick shows that the shape is a close match, but I can't find the cap part that matches. I think the grid may have been cut out from a solid lid, though, and that is why the score marks are present.

If this is an avenue that has been traveled before, I am sorry. And I will continue to keep my eyes open... no reward necessary. Least I can do for THE Art Andrews.

PS- since it was brought up here, I wanted to give my two cents on the SS forum... I love studio scale models, and I respect the amount of time and effort it takes to restore, find, identify, fabricate, ect. the exact parts of a screen-used model. SS builders have my absolute respect in this hobby. That being said, the roses you all smell are in the lobby, not the toilet. I have avoided the SS forum like the plague since I was new here, because of the arrogance and pompousness of its members. Maybe the reason this forum is so small is because of the attitude of its loyal flock. And maybe it could become the largest forum on this site with a little patients and fellowship. I don't care how special you "think" you are... your not. get over yourselves. Finding lost parts and identifying model bits is a useless skill to anyone outside the world of model building. I have seen that most of the people who use this site are looking for a home. They want a place they feel welcome to share their interests with people who will accept them and share their interests. I am one of them. None of my close friends and family have any interest in modeling, sculpting or otherwise, so THIS is my family for that. And if a person thinks that they are the standard everyone else should aspire to, then they have no place in a community that revolves around fellowship and understanding... I wish you all the best. I will not be following this too clse, but I will keep looking for this part. It has been fun, so far!
W

RPF PREMIUM MEMBER
Was this part ever identified?

wtyler3 said:
Was this part ever identified?
Click to expand...

I'm thinking the grill looks like a top section of an old convection radiator. Or possibly part of one of those old style gel air fresheners

Probably not a disposable air freshener. To me those tabs look built in and companies would not use screws for disposable stuff. It would be glue or snap/press together.

I'm still thinking its part of a slot car controller, albeit a crappy one with the external tabs for the screws.

Need some help with some part IDs...