I went on a tour of Edwards AFB with my work last week .
They had a small outbuilding with a few items in it.
one item was the filming model of the Atlantis shuttle from Spacecamp
I only took one pic that day, and this was it.

The craft behind it is one of the first "lifting body" aircraft ever made. It's the same fleet of craft that they used in the opening sequence of the Six Million Dollar man that crashes.
oddly enough, the pilot (Bruce Peterson) of the real craft in the crash survived.

Edwards gets used for filming quite a bit
The Stark Industries building was there, but it's on the flightline, so no pics were allowed
Last edited: Dec 24, 2010 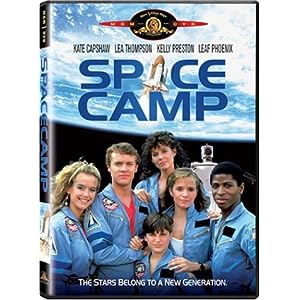 Cool space shuttle picture! I actually enjoyed watching Space Camp on cable tv. It's not the greatest movie ever, but it was a fun-family-style movie.

Accident of timing, I know. But still a new low in tastelessness.

The film itself... well it's another of those "kids accidentally launched into space!" things. Afterschool special stuff at best. As I recall they have camp kids aboard the shuttle during some sort of engine test, which is absurd from the get go... and somehow they get launched into orbit. But instead of dying they somehow manage to grit their teeth and survive using moxie and gumption.

RPF PREMIUM MEMBER
As for accidently launched into space this makes much more sense.


I think that is Chewie at the end before he got the SW gig.

Accident of timing, I know. But still a new low in tastelessness.

The film itself... well it's another of those "kids accidentally launched into space!" things. Afterschool special stuff at best. As I recall they have camp kids aboard the shuttle during some sort of engine test, which is absurd from the get go... and somehow they get launched into orbit. But instead of dying they somehow manage to grit their teeth and survive using moxie and gumption.


You don't have to be all persnickety about it Karl.

I, for one, enjoyed the farsical shenanigans of those young'ns.

I also felt that the premise was certainly plausible. The 100,000 steps required to launch the shuttle could certainly all be bypassed accidently, if ya think about it. Then...

I live in Ohio about 90 minutes from Dayton where the National Air Force Museum is located right by Wright-Patterson Air Force Base if not on the Base grounds itself!

Anyhow, the AFM is bidding to get a Space Shuttle. They probably have next to the National Air & Space Musem (NASM) the best facilities for maintaining and doing restoration on vehicles but without the political B.S. and PC NASM has become known for in recent years.

The Shuttle that AFM prefers to get would be the Atlantis since it's done the most military/top secret missions of the surviving shuttle fleet. NASM is almost certain to get Discovery since it's the oldest intact Shuttle and was the first to fly after the fatal accidents involving Shuttles Challenger and Columbia. NASM currently has the prototype Shuttle Enterprise at its Annex and will probably loan that vehicle out to another museum to clear room for Discovery.

AFM will probably get Atlantis or Endeavour... There have been other bidders for Shuttles including the outdoor facilities at USS Intrepid -- which I think would be a lousy environment to display a Shuttle because of the lack of protection from the weather and pollution in NYC. Again, the AFM just has excellent facilities for restoring and displaying aerospace vehicles and is probably the top military museum --- if not the largest --- for display of historical aircraft and aerospace vehicles.

I went to Space Camp in 1985 and worked with many of the simulators featured in the opening bits at the camp. Yes, the film was a victim of bad timing, but I don't think it is "a new low in tastelessness" by any stretch. In a sense I think of it as something more akin to the last film of the 1980s that show us what NASA wanted to showcase about shuttle, rather than what it became on January 28, 1986. But also the movie had a message of hope in it. When you are a kid growing up with a shuttle launch occurring about once every two months (NASA was trying to get to a flight frequency of a launch a month) you have hope that maybe one day your future will involve perhaps living up there. Challenger sort of killed that dream for me as we became I think a bit too risk averse afterwards and no longer seemed to have the sense of dreaming big anymore or backing up the dreams with funding to make them happen since it is considered too risky and too expensive to do.

Once shuttle retires, I think we are going to look back on it a bit more fondly as we realize there is no craft to replace it. Sure, Americans will continue to go into space on Soyuz and maybe Space X's Dragon will do the job for taking crews to the ISS one day, but we won't have the ultimate utility vehicle for Earth orbit repair work anymore. Plus, astronauts will be coming home on parachutes to land either somewhere in the ocean or on land in remote locations so as not to risk damage to property as opposed to gliding home to land on a runway near civilization. One thing I hear astronauts could do if they had to land at Edwards (due to weather issues at KSC) was grab a bite to eat at the base's Burger King. It may not seem like much, but when you've eaten essentially camping food for the past two weeks, a burger, fries and a soft drink (which you can't drink on orbit since carbonation gives you painful gas bubbles in your weightless stomach) likely tastes REALLY GOOD!

Nice find with the model there. Space Camp to that point I think had some of the best miniature shuttle model work of any film to that point as it looked realistic compared to Moonraker of only 7 years before and Starflight One from 4 years before. IMHO, nobody really managed to surpass that work until Space Cowboys in 2002. Some might say Armageddon got close, but its X-71 shuttles were too advanced and different from normal shuttles to qualify. Granted I regard the launch sequence in Armageddon as cinematic eye candy for a shuttle lover, but still in the final analysis it was digital compositing of the X-71 over a launching shuttle (which funny enough was Atlantis again) since the live shuttle launch was WAY better than anything that the effects houses could do.

One ironic bit is as I understand it, the shuttle flight deck set used in Space Camp got resurrected, rebuilt and modified by Wonderworks for use in Space Cowboys with some modification (such as putting 6 seats on the flight deck, something which didn't come out well in the film edit). It shows that a lot of care was put into that set when it was originally built.