OdiWan72 said:
Chris aka @Field Marshall could do it and would surely be able to offer affordable metal discs for the prop-community :thumbsup
Click to expand...

IDK his means or tools, but we're looking to do stamped metal pieces instead of machined metal like what all metal replicas have been for this piece. The stamped versions would be more accurate, and reflect the nuance details that I don't think could be reproduced via machining. To add, there's a very small detail on the face of the disc that I believe is a result of the stamping process that is not apparent in photos, at least from what I have seen in my research.

I still don't know what appliance/machine it's used for. It's likely for something large, like a boiler or large dryer, and some signs pointing towards even an oven. All I do know is that it's some type of thermostat piece. There's a multitude of these things out there, but these are obviously unique by it's triple-dot design AND it's size. This may also be referred to as a "klixon." While Klixon IS a brand, it's also seemingly used as a generic term- like the use of 'band-aide," so my usual search terms included at least the combination of "thermostat" and "klixon"

The ones I found in South Africa was through a listing on "BidorBuy," which is best described as SA's version of Ebay, with one of the 2 nearly identical listings looking like this.

So there were 2 separate listings, with at least 2 of the desired pieces in each lot, totaling 4. These are clearly older or have been through a lot of use. While the metal portion is easy to clean, the rear plastic portions are quite dirty. I am pretty certain that the white portion on the rear is actually a ceramic material. RS Cracked one open and this possible ceramic portion was formed into the inside of the metal disc portion.

Here, you can read the markings. It's a 2a 250V part. The portion that is not clear is the "Vebe-SpA-ITALIA." Of course, the "ITALIA" leads me to believe this particular piece was of Italian origin. "Vebe" appears to be an actual company producing some type of testing equipment. "SpA" doesn't give me any results other than resort listings. Of course, there's the patent number- 123946, which has not yielded any significant results when searching patent databases

Also something to note, the sequence of stamped letters (from the inside) are different. They are each:

While it's just my speculation, I feel the final series of numbers are the actual manufacture date, so the first one being made in February 1973 and the 2nd being September 1974, and if so, would put these at 45 years old!

I do want to add this, as I did another search, and came across THIS Ebay sale

No, I didn't buy it, but perhaps someone here did It looks that way as the seller had re-listed this very thing multiple times...and was just sold on June 6th. But what's different here is that this seems to be made much more recently. The company "Eaton" appears to prominently produce electric components in the 80s. I haven't done a deep dive yet, but this at least confirms there's been at least 2 manufacturers of this piece at 2 different points in time, which means it may still be possible to locate more. That one in the ebay listing is clearly unused and in perfect shape. The other thing to note here is that according to the listing, this had a patent number of "123948" where the ones we have are "123946," which again, indicates to me that the ebay one is much newer.

So yea, there it is. Goodluck finding them if you can. I will be molding mine regardless to offer up to the community, and I'll post when I do

FYI SpA stands for "Società Per Azioni", which means that the Italian firm is quoted and registered in the Italian Stock Exchange.
Regards,

this is the Bloomberg company profile:
https://www.bloomberg.com/profiles/companies/4236877Z:IM-vebe-elettromeccanica-spa

says it was founded back in 1984, and sells precision measurement accessories.

I've seen that on Italian companies before, thanks for the info!
C

Curious to see if the rest of those assemblies are found elsewhere in the films.

Obviously the thermocouple disc is now an identified part but see the T shaped part on the AB section of the Snowtrooper is that a well known found part?

Just curious as I think I have some.

Slider for an audio mixer if I remember correctly.

Sure that is where I got mine from as well.

Just got the Uher 500 in the other day. Didn't get a chance to post sooner

Whoah! That's actually a really slick looking mixer! I had not yet seen a picture of it. It's apparently also somewhat coveted for its sound. Now I understand how camera guys feel about us! Nice score!


Pedro said:
Whoah! That's actually a really slick looking mixer! I had not yet seen a picture of it. It's apparently also somewhat coveted for its sound. Now I understand how camera guys feel about us! Nice score!
Click to expand...

They're fortunately for the moment not too hard to find but I fear that may change due to folks buying them up to pull sliders off. In keeping mine intact for display purposes


tubachris85x said:
They're fortunately for the moment not too hard to find but I fear that may change due to folks buying them up to pull sliders off. In keeping mine intact for display purposes
Click to expand...

That is the same one I have.

I ripped mine to pieces just to make sure there were no more decent greeblies inside it.

tubachris85x I was watching The Empire Strikes Back the other day and noticed that one of these greeblies is definitely used in the Millennium Falcon cockpit.

Best picture I have of it - it is much clearer on screen.

i think a few of the discs have been spotted in the falcon, pic was posted in this thread post 25 1st page


voice in the crowd said:
tubachris85x I was watching The Empire Strikes Back the other day and noticed that one of these greeblies is definitely used in the Millennium Falcon cockpit.

Best picture I have of it - it is much clearer on screen.

Yea, that's a good picture. I recall there being one clear pic where it was much more clearly visible which is where I remember first learning it was on that set piece.

Wanted to note that I haven't produced molds yet...I am unfortunately "between jobs" at the moment. Once I get my situation rectified, I'll revisit making molds

I will be ordering silicone early next month in order to get molds for these. I loaned out one of the thermostats to a vendor to produce molds for his kits, and I should be getting that piece back hopefully this week. I'd very much like to be able to mold both of them at the same time and so I can knock out more than one at a time.

I decided that my soon to be casts will be cold-cast aluminum, and will not be altered from it's original form, i.e., you're getting a copy of how it actually is, and I'm expecting each to be about $5 each, so it won't break anyone's bank.

Oddly enough, last night, I found another thermostat on ebay, and have secured it. It is not in the greatest condition and frankly no good for any actual prop use, but I decided to get it anyways for my collection. It's got what (I thought was paint) but speculated to be limescale and deterioration due to rust on part of it, but it's the same make/model as the ones I found in South Africa, however, with a white plastic backing, and not a black one.

RPF PREMIUM MEMBER
Great news TC...IN for a couple of the coldcast discs

OdiWan72 said:
Great news TC...IN for a couple of the coldcast discs
Click to expand...

I got a wedding and honeymoon to fund, so I need to sell a lot of these lol

RPF PREMIUM MEMBER
I'm in for a bouquets worth

nailuj said:
I'm in for a bouquets worth
Click to expand...

It's a shame I missed Valentines Day

RPF PREMIUM MEMBER
So a follow on from my other update post. I mentioned that I had found another thermostat on Ebay the other night after feeling compelled to search. This is a pic of that one I found (below). Of course, it's got some...issues. Nonetheless,it's still a collectible to me.

So, after paying for this and him packing it up for shipping, I sent him another message asking if by chance he remembered 'exactly' where he sourced it. He confirmed he got it from "some kind of washer" appliance, as he said he couldn't recall. I responded confirming that it was indeed a dishwasher thermostat, and I was hoping he'd been able to remember a specific brand or model. That was last night.

Not too long ago, though, messaging me that he gave it more thought, and while he still couldn't remember the exact origins, he said he *thought* he may have had another one sitting in his loft (I assume he meant his attic). He went out of his way to check, and sure enough, he found what he was looking for, claiming it's "very similar" and that it "still" has it's rubber gasket on it. Now, he claims it's nearly identical, and while the lot I bought from him had other klixon pieces I didn't need, he re-opened the package, took one I didn't need out, and threw the one he had found sitting in his attic, and said he just made it in time to get dropped off for delivery.

I felt that was very kind and generous to do, given he did not even have to do ANY of that for me, especially for such a low price lot.

So, it is very possible that it is indeed another matching thermostat model. He said "very similar" in the first line, but then said "almost identical" in the later line of message....so right now it's a 50/50 on whether or not it truly is another one. I sent a follow-up message thanking him for it, and threw in a question (3 dots on the top?) in there, but we'll see once I get the package in next month. 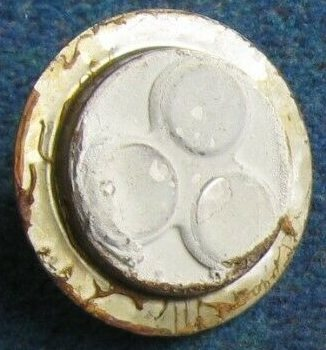