Tsurabisu has a concept for a Predator that's influenced a lot by Shredder from Teenage Mutant Ninja Turtles, as well as samurai armor in general. (I think that's his concept, anyway; correct me if I'm wrong.) He's commissioned me to make a Shredder-inspired biohelmet. Oh, by the way, here's his build thread.

Here are his concept drawings: 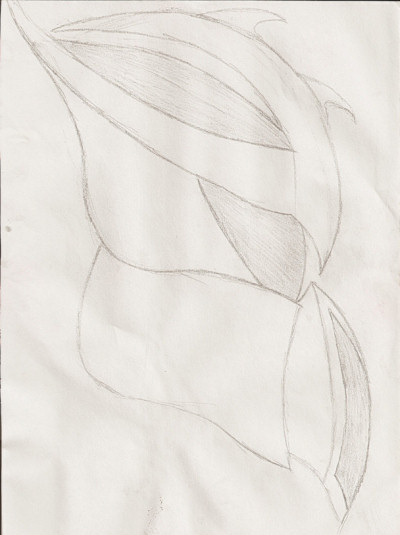 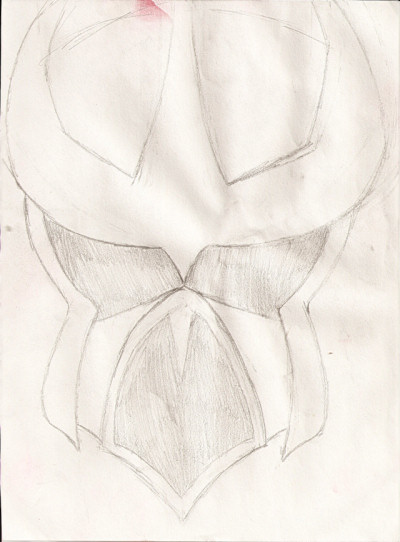 He's using a Usurper P2 open-mouth mask. Since it's an open mouth, the bio has to be larger and wider around the mouth area, so I'm going to have to modify the concept art to make things fit.

I've started the bio sculpt with the menpō, which is a removable mask that goes around the mouth. Here are a couple pictures of my early sculpting on the menpō: 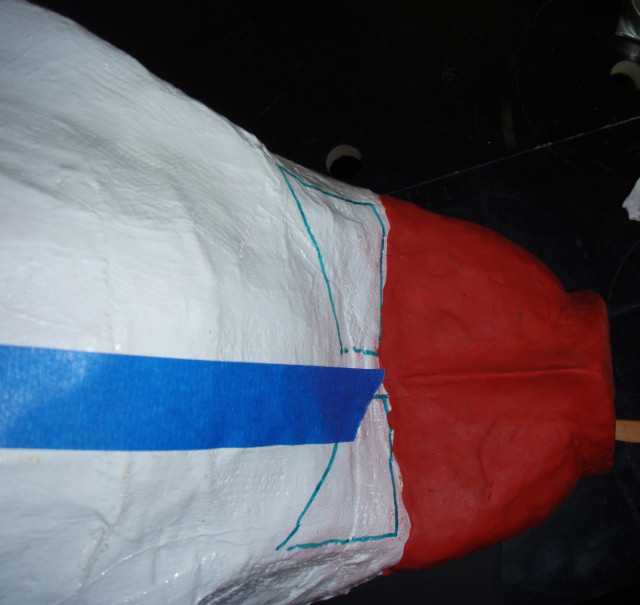 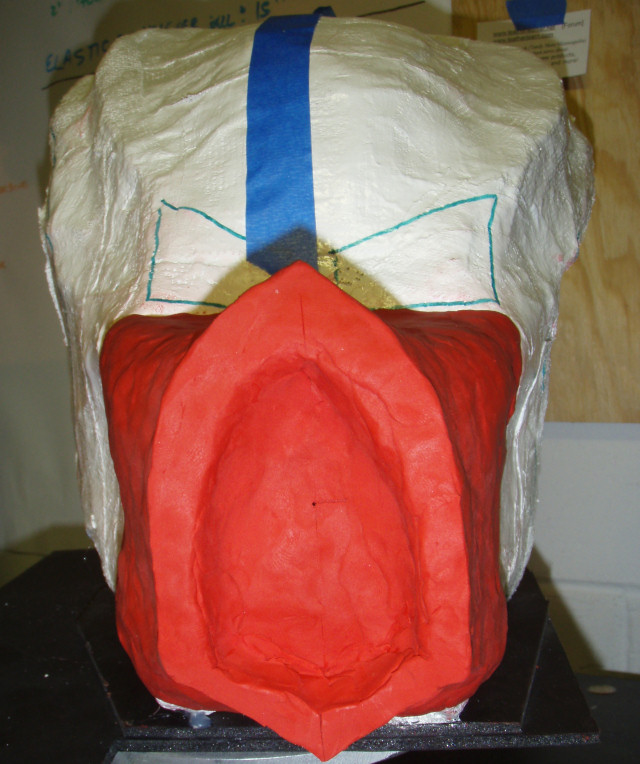 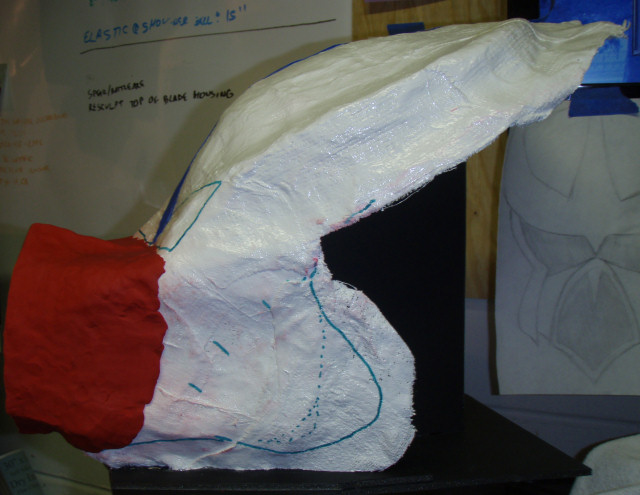 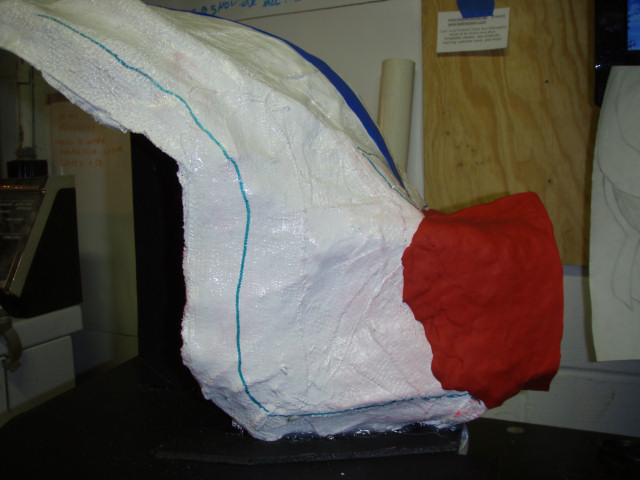 I covered the white plaster bandages with a glossy varnish, and I drew the eyes in with a green Sharpie. With the red clay on there, it sort of looks like an evil clown.

How's it looking so far? And does it look big enough to fit the top mandibles of the mask? (When we did the plaster casting, we didn't have the mandibles attached, so I've added some extra room for them.)

It looks great, Todd. We should have plenty of room for the mandibles, though they are flexable enough to bend a bit if we need. And Lol about the clown comment. *Ponders how a clown pred would look*

Commin along good... I always thought shedder looked like a Pred,, and on the new animated movie of TMNT the turtles wear ninja armour that also looks like Predator..keep those update pics comin

So I've been completely negligent by not posting in-progress pictures of the project. Anyway, against all odds, I managed to cast the mempo last night. The mold was hard enough to do since the brush-on silicone turned into drip-off silicone in the first coat, but I used enough thixotropic additive in subsequent coats to get things to hang together.

Anyway, here's the raw pull of the mempo right out of the mold: 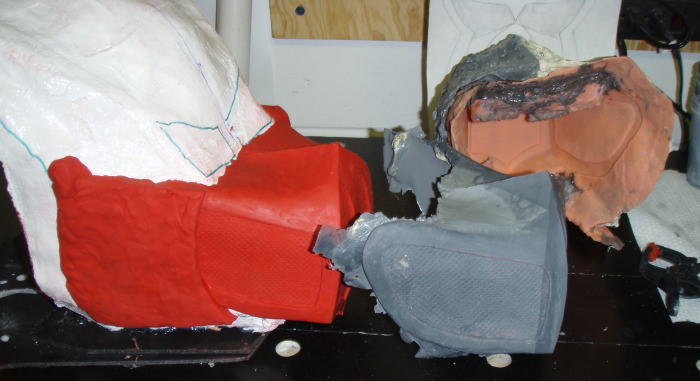 Here's a more-finished product after some trimming and sanding: 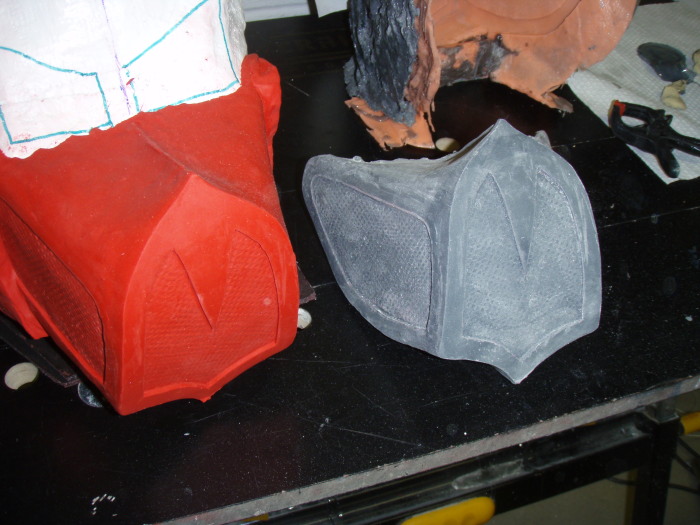 Now that I'm done with that, I'll be sculpting the rest of the helmet. I'll also make sure the silicone sticks properly to the sculpt next time.

Looks great, Todd. Hopefully those new sketches'll help you out a bit.

Seems like I haven't updated this thread, even though I've been sculpting. After I cast the mempo, I started shaping the top of the bio, including working on the three blades. Here are a couple pictures: 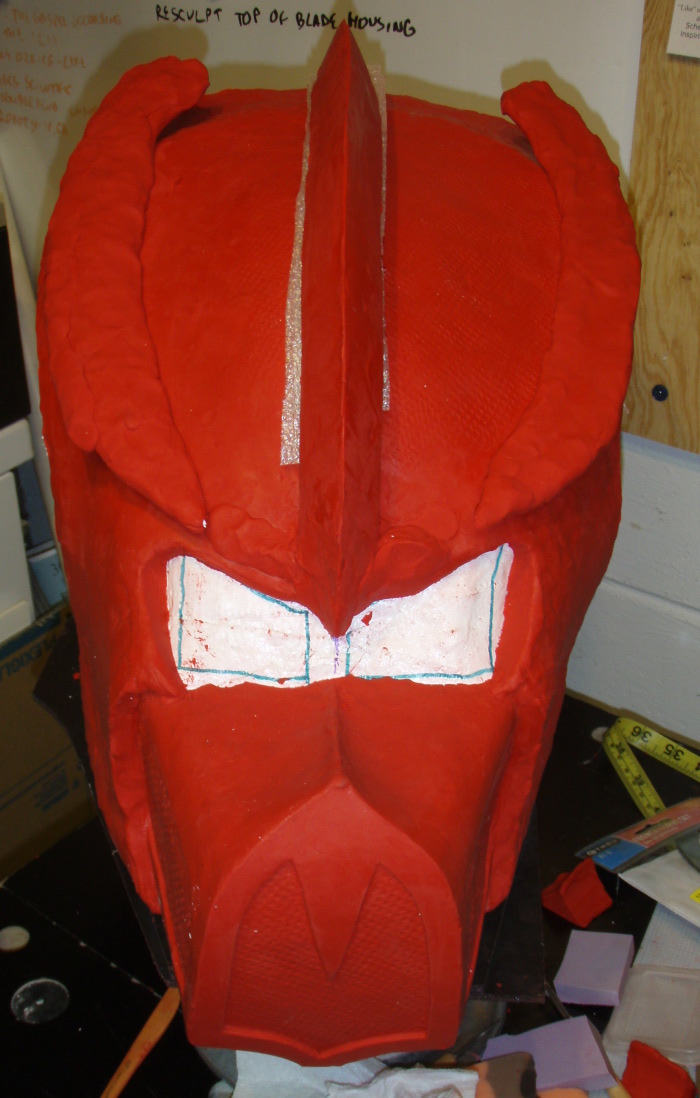 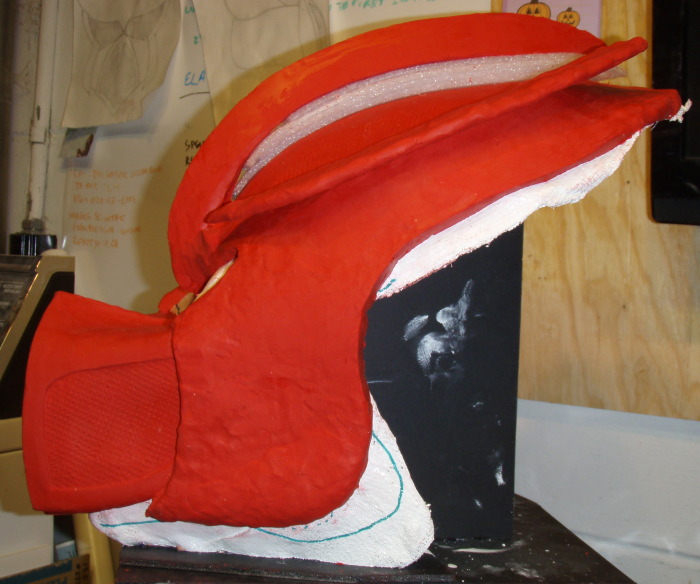 The center blade is pretty much in the shape that I want it. I considered sculpting the sides a bit to make them concave, instead of straight, but I'm not sure it would make a lot of difference. I used some copper wire and U-shaped steel in there to reinforce it, but it still sags a bit from all the unsupported weight, so I'm propping it up with some foam in the sculpting process. When I make the mold, I'll stuff some already-cured silicone between the blade and the top of the head.

I've just begun working on the left and right blades, so they're in very rough condition here (as if it wasn't obvious). I started these by cutting a piece of plastic to support each blade, and then covering them with clay. The plastic will hold up the unsupported weight in the back, where the blade is cantilevered off the side of the bio.

So, that's what I've been spending all my time on lately. (Oh, and you can see what's on my to-do list on the whiteboard in the background. Heh.)

I just finished up the sculpt last night, with Tsurabisu approving things via a Stickam conference. Here are the completed pics: 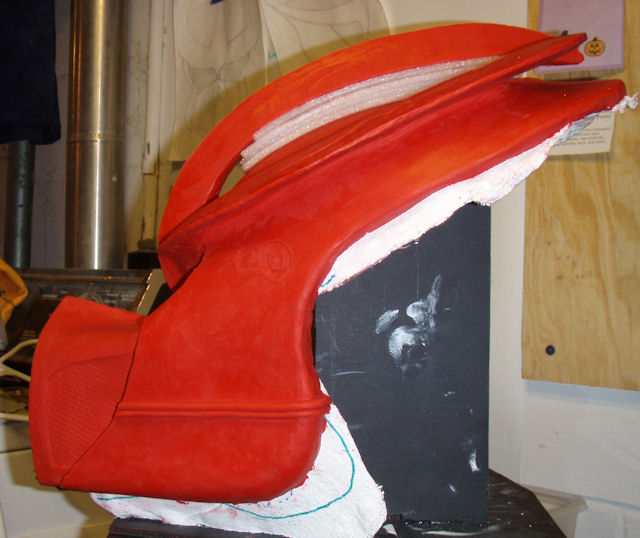 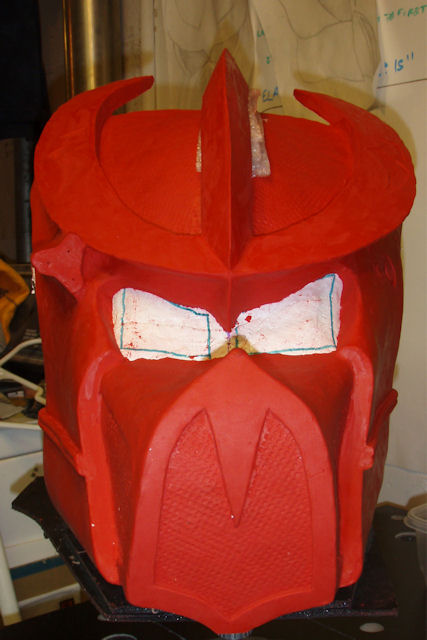 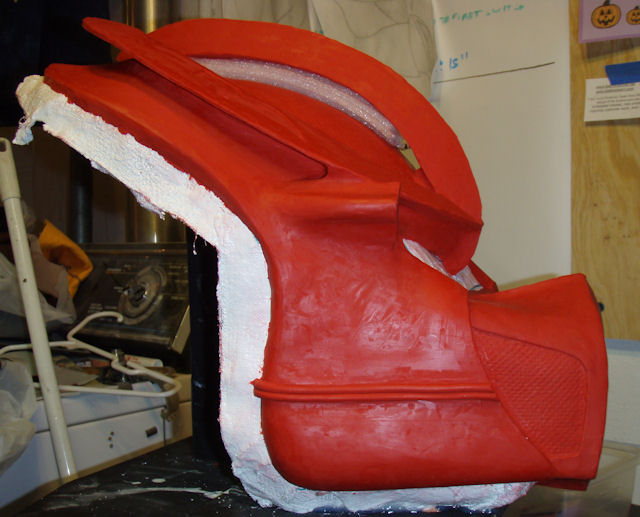 Also, he wanted me to put one of these runes on the left and the right blades as a clan symbol: 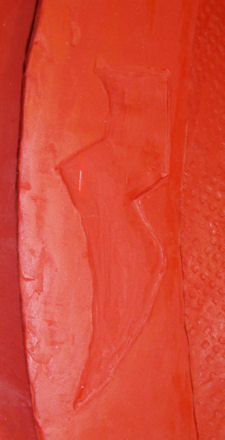 Actually, I think there should be a Midwest Hunters' Clan, maybe with a stylized walleye as a clan symbol. Nah, that'd be kind of weird.

I just started the molding process about an hour ago. It's going to be a little unusual to mold it, given that the center blade floats above the helmet like that. I think I'm going to fill the void with a solid mass of silicone, then cut that chunk in half when it's time to demold the clay. I figure I should be able to pour the Smooth-Cast 320 plastic as usual, and then pull the finished cast out via the line I cut in there to demold it.

I finished doing the casting last week. Here are some pictures of the completed biohelmet, as posed on my own mask: 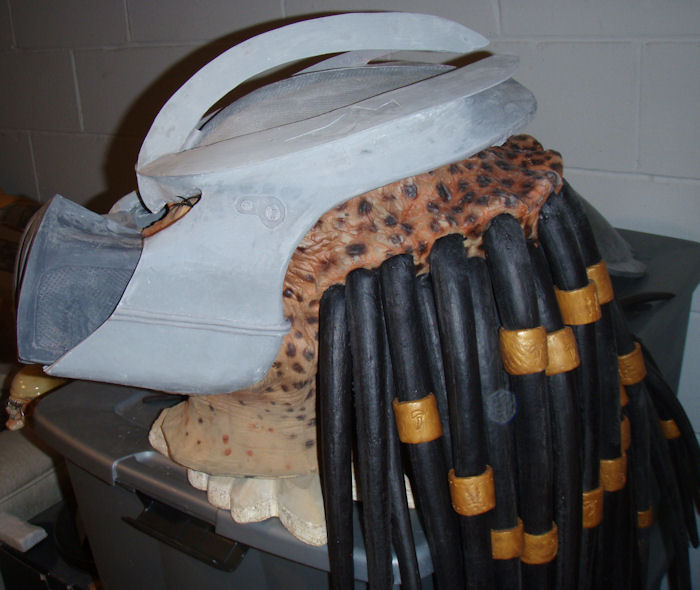 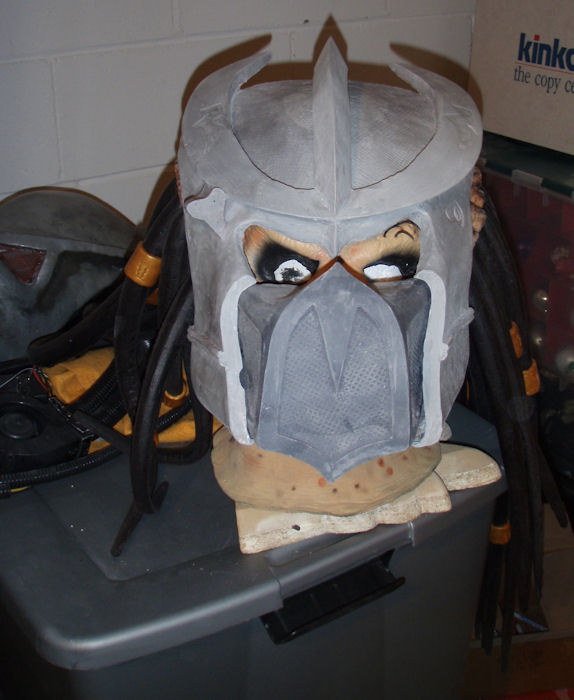 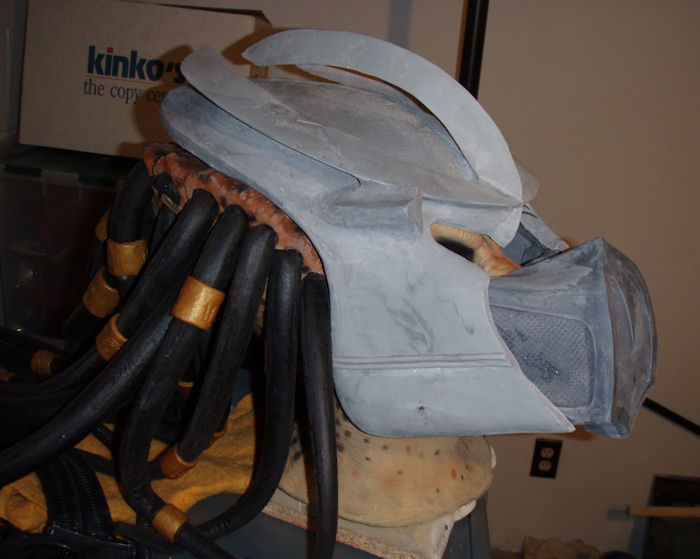 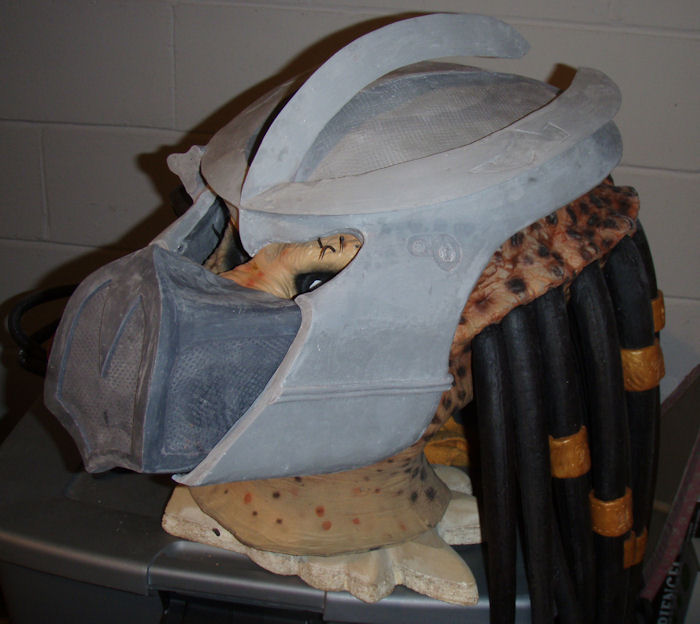 I still need to do some trimming on the inside, so it sits properly on the mask. Actually, since this is a P1 mask, the dimensions are probably different than they are on Usurper's P2 mask.

I think this is coming out nicely. It's definitely a unique design.

I delivered the Shreddator bio to Tsurabisu today, in exchange for a sword that I'm borrowing for a masquerade contest in a couple weeks. Here are a few pictures. The first couple pictures are of his mask paintup. It's definitely a unique color scheme, but I like it. Besides, if the characters from Predators had some really out-there color schemes, then why can't he? 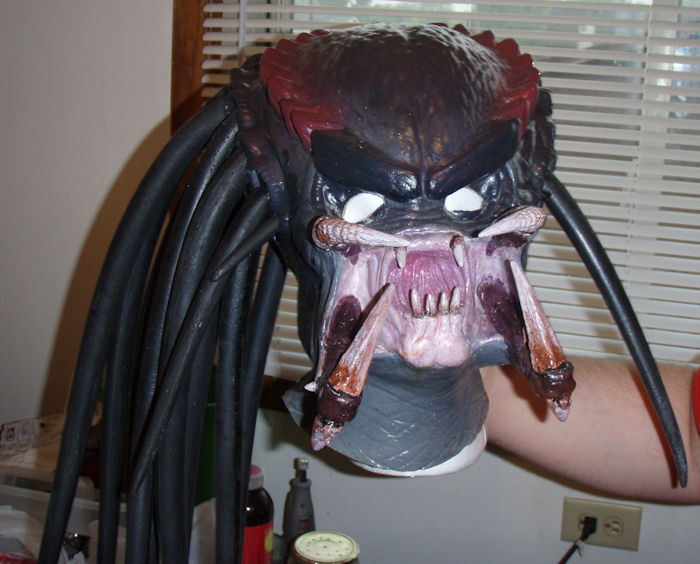 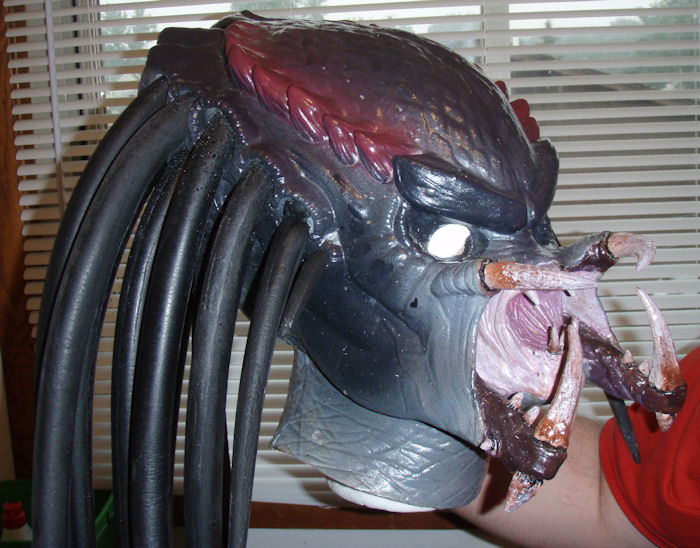 By the way, when I went over, he was about halfway through attaching the dreads on the mask. That's why there's only one dread on the left side.

Here's the mask with just the mempo, the face mask portion of a samurai helmet. Since Shredder from TMNT is a samurai, the Shreddator build is going to be inspired by a lot of samurai armor. 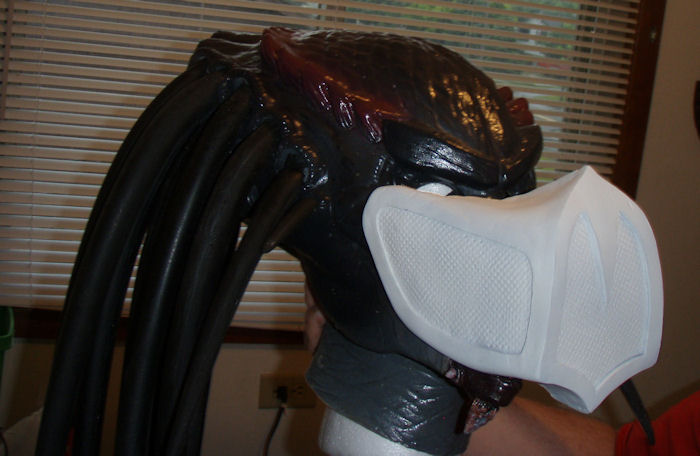 And, here are a couple pictures of the whole biohelmet. It fits on the head nicely. I thought I'd have to do a lot of trimming, but the proportions of Lee's P2 mask are different than Pete Mander's P1 mask that I was testing it out on before. 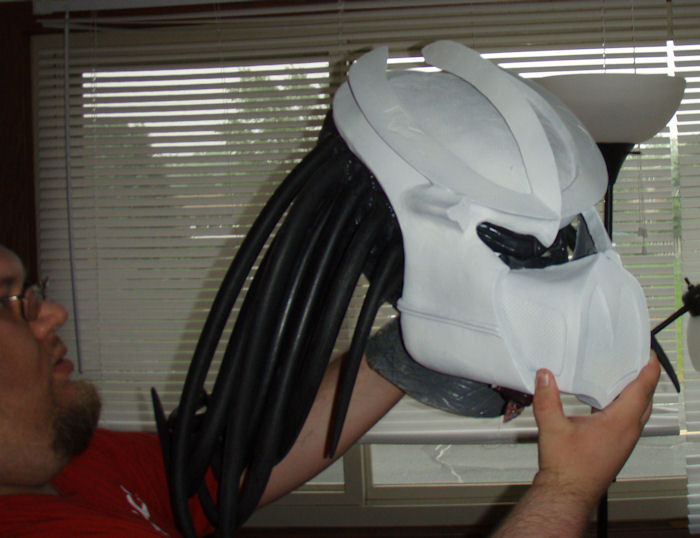 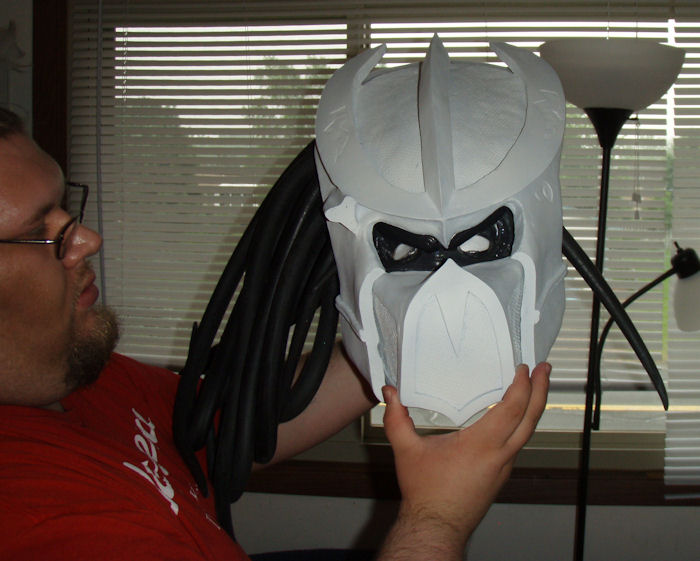 Travis was really pleased with the way this biohelmet came out. I had a good time working on it. It's cool to do something original and unique.

Is there lenses for it?

I didn't originally build lenses into it because the mempo part was removable, and I wasn't sure how Tsurabisu was going to attach lenses or how he was going to do it. I believe he mounted lenses in there after he did the paintup, but I'm not sure what he used.
You must log in or register to reply here.
Share:
Facebook Twitter Reddit Pinterest Tumblr WhatsApp Email Link
Top