I started working on my Barristan costume back when the show was still running. My costume got pushed to the back of the bench, it took the Quarantine for me to finally get it done! 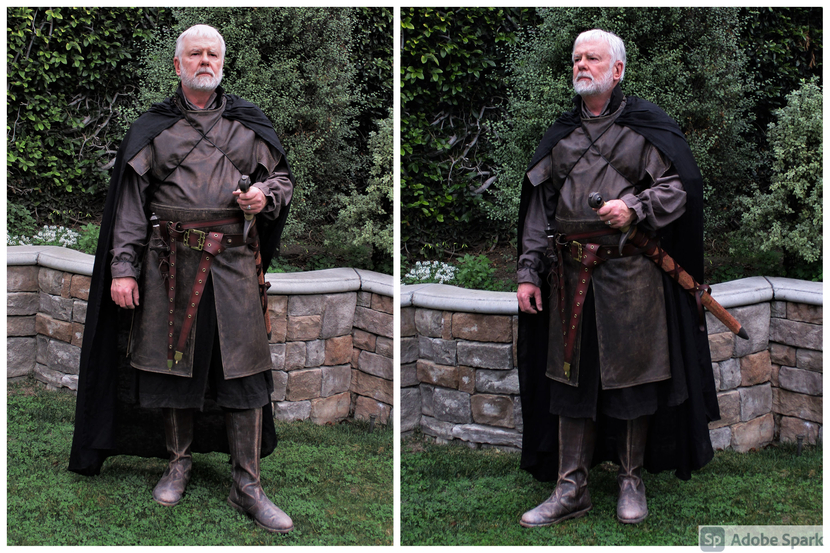 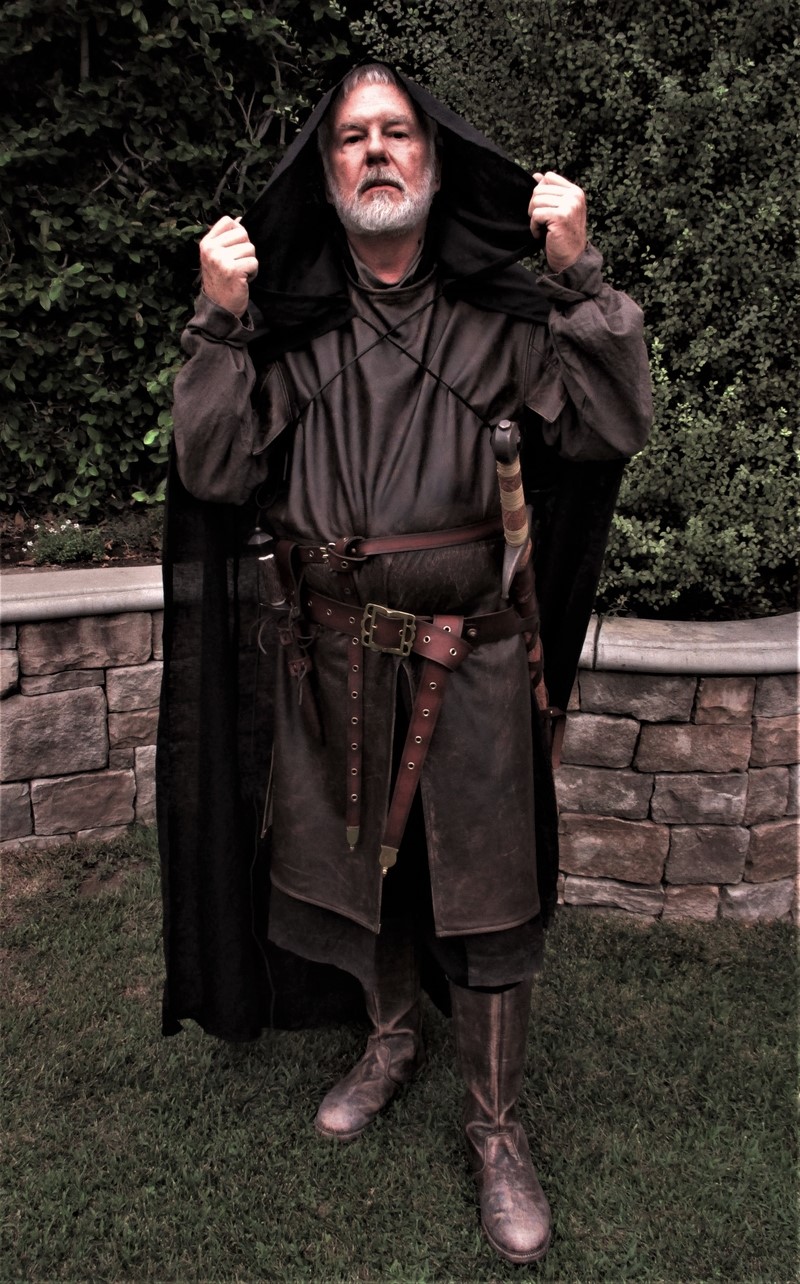 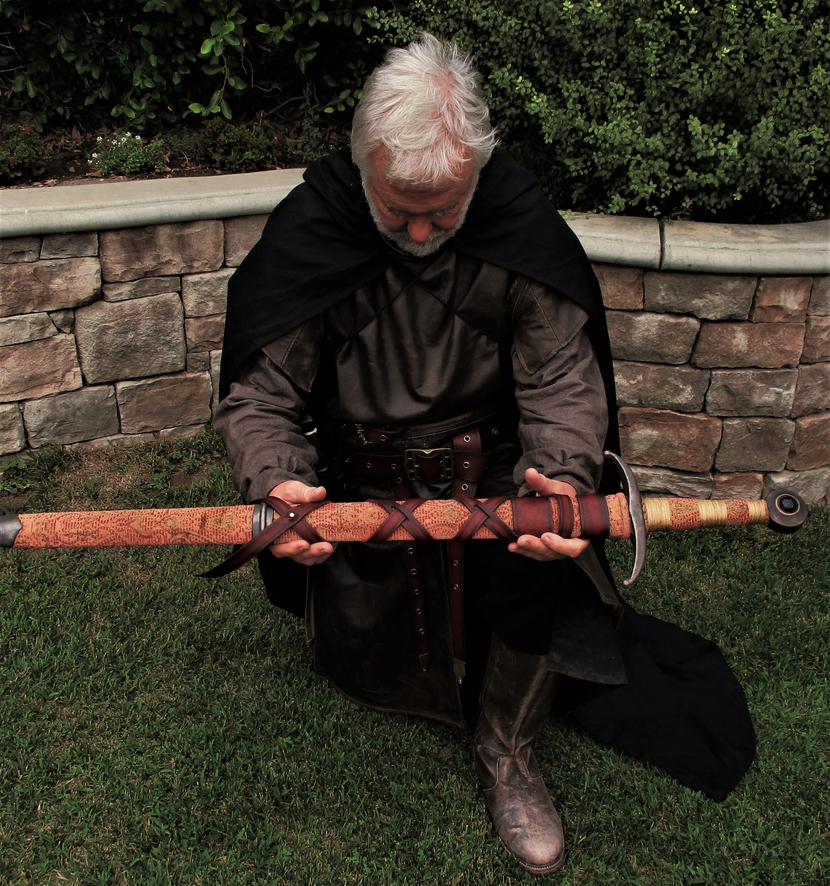 There are things that need addressing, for one thing I need to rough up the leather jerkin more. It's amazing how shiny it looks in the photos considering how much I roughed it up already.

The "exile Barristan" costume remains the same except for the linen shirt he wears under both the leather jerkin and the black wool sleeveless tunic. At first it's a dark brown/olive/grey (which is what I went with) and later it changes to a light grey (seen in Barristan's final battle).

I'm always thinking about the practicality of wearing a costume at Comicons, therefore both the sword and dagger are one-piece props (no blades, the grip and scabbard are one unit). 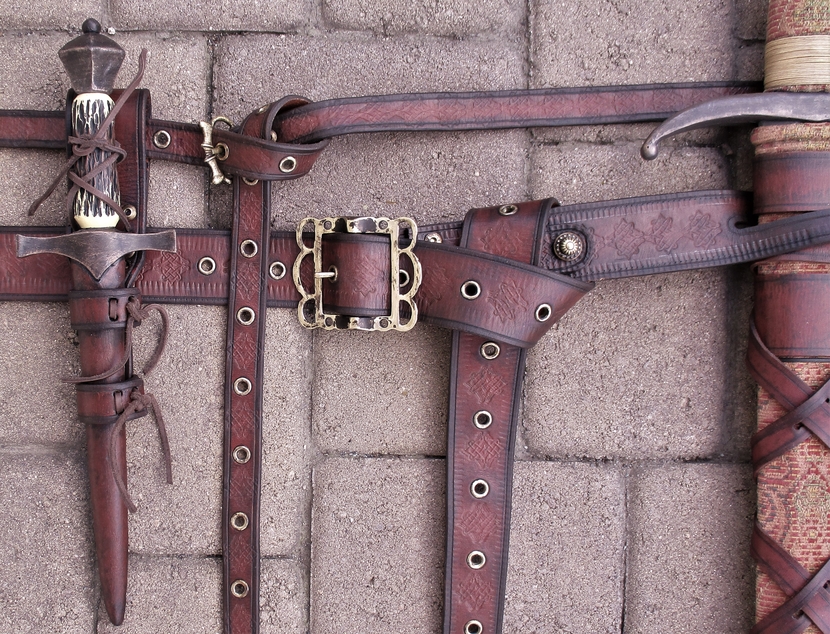 The dagger is my first experience with making something out of Sculpey. Here's the process it went through, from the blobby beginning to baking, sanding, painting, and making the frog. The pommel and crossguard look completely black in some scenes, gleaming bright metal in other scenes, so I split the difference and did sort of a bronze effect. 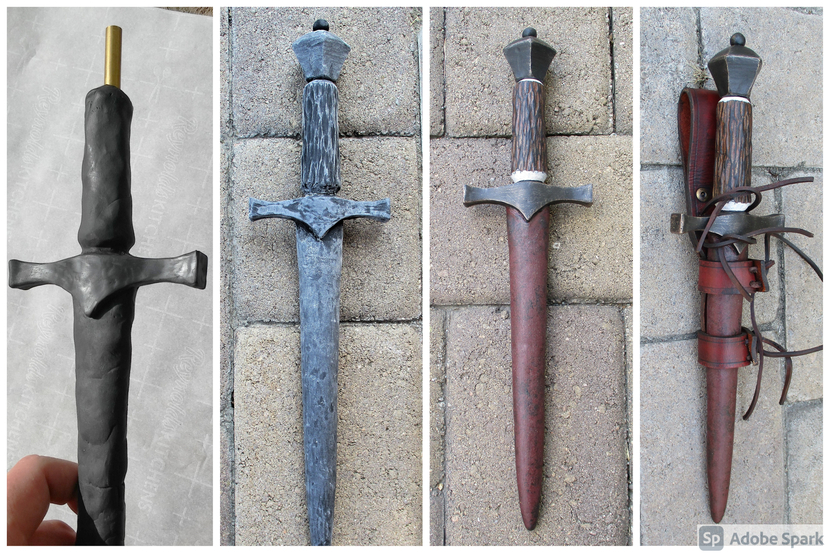 The sword and scabbard are a one-piece foam prop, my first working with foam. Like the dagger, the sword's pommel and crossguard look different in different scenes, ranging from clearly looking like steel to clearly looking like brass. Once again I took the middle path. So in this comparison it looks like my prop isn't brass enough. Had I chosen a different screen shot my prop wouldn't look steel enough! 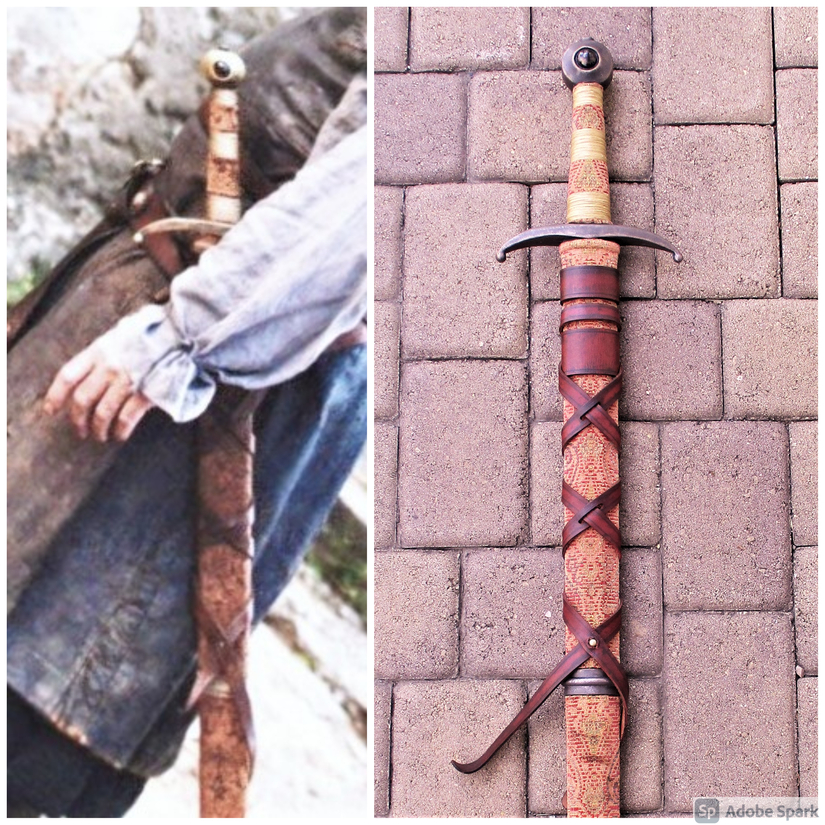 By the way that buckle crops up in various costumes, here it is for Barristan, The Mountain, and Rob Roy (Liam Neeson) 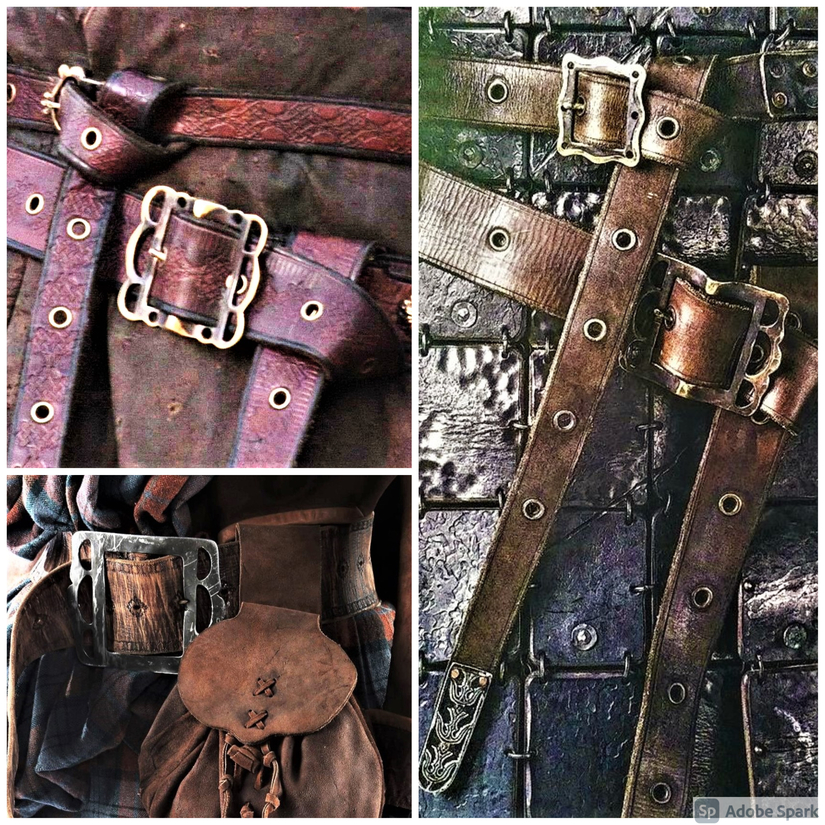 now only if Con Of Thrones isn't cancelled!

RPF PREMIUM MEMBER
As you can see above my buckle isn't screen accurate. In the photos above the buckle was in its off-the-shelf condition.

That buckle was used in that way for The Mountain's scale-armour costume. 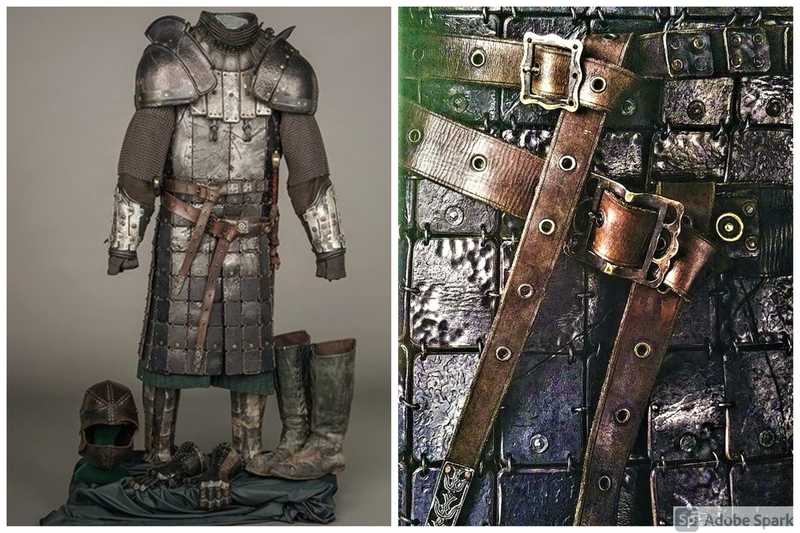 But the GOT costumer, not wanting to have two characters with matching buckles, did some modifications on the buckle used for Barristan's exile costume.

So the last couple days I did those same mods to my buckle. First I ground down the extra bulges on either side, then I drilled four holes, and ground down the top and bottom to create semi-lunettes around each hole.

The product was a screen-accurate buckle, here you can see the buckle as it came, a middle stage with the extra side bulges ground down, my finished buckle, and a screen shot of the "hero" buckle. 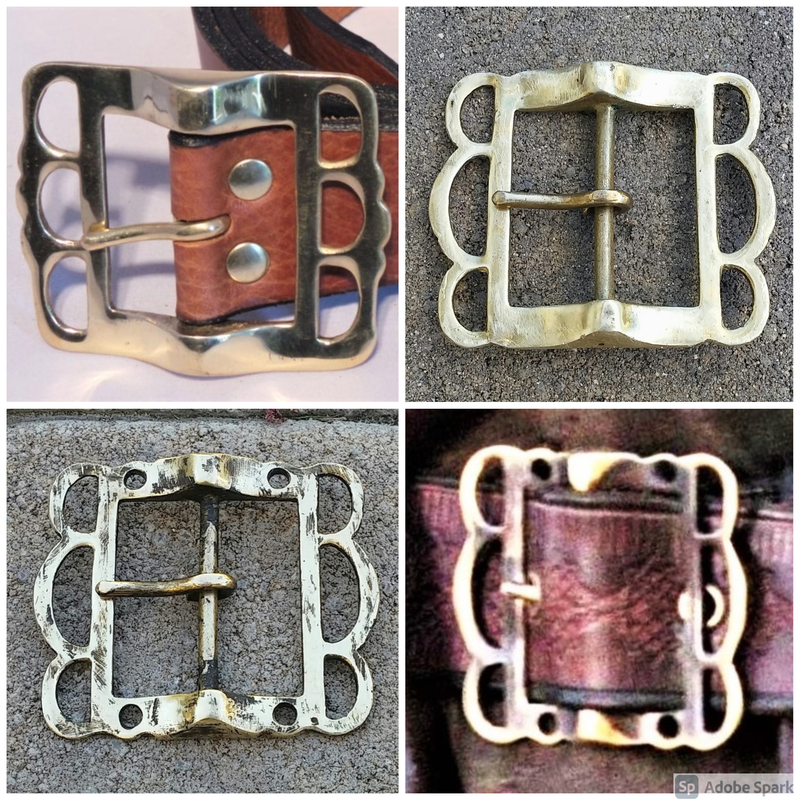 So far so good, here's my belt rig with the screen-accurate large buckle: 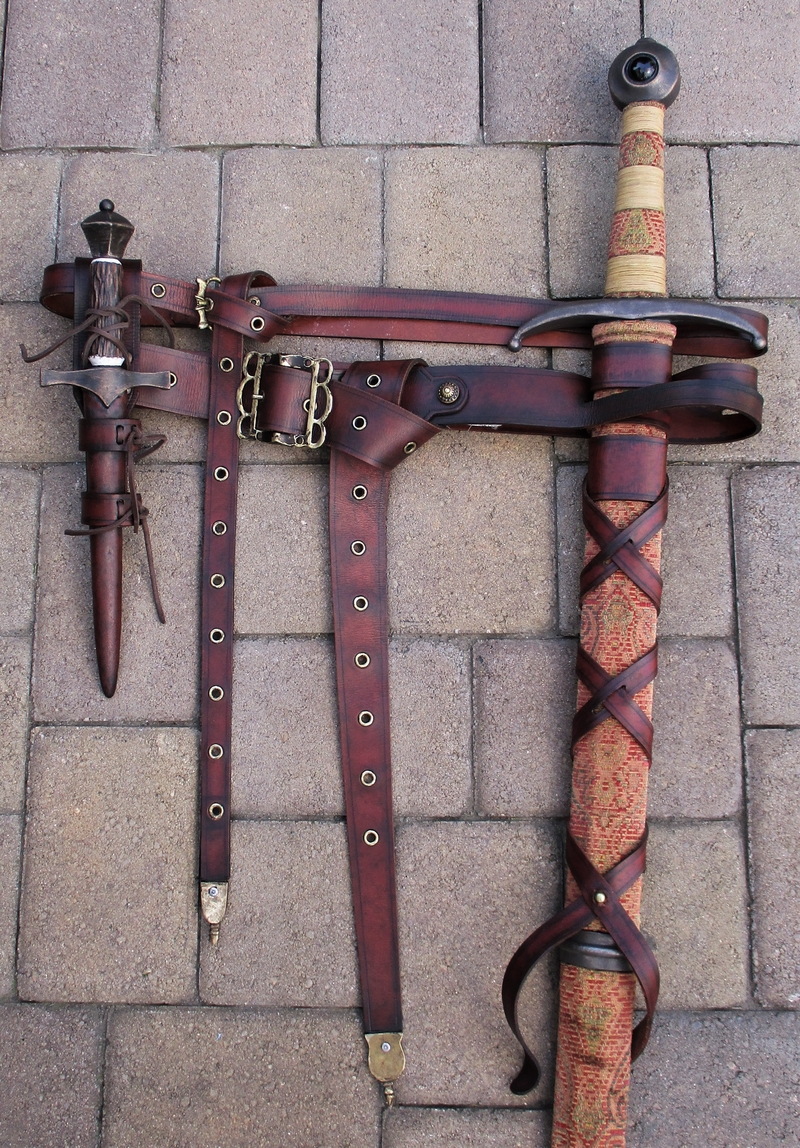 But what's missing is the tooling on the leather! As we know the GOT costumer adorned many of the sword-belts with Celtic knotwork. These were mostly common and widely available patterns.

But Barristan's pattern had me stumped. I scoured the internet for people selling Celtic-stamped belts and didn't see the Barristan pattern.

Then I switched from looking at finished belts to looking at the tooling itself, and immediately found what I believe is the stamp used by the GOT costumer for Barristan's exile belts, bottom row second from right 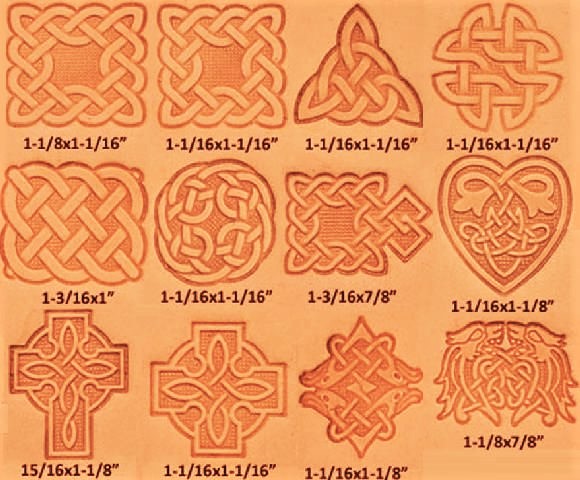 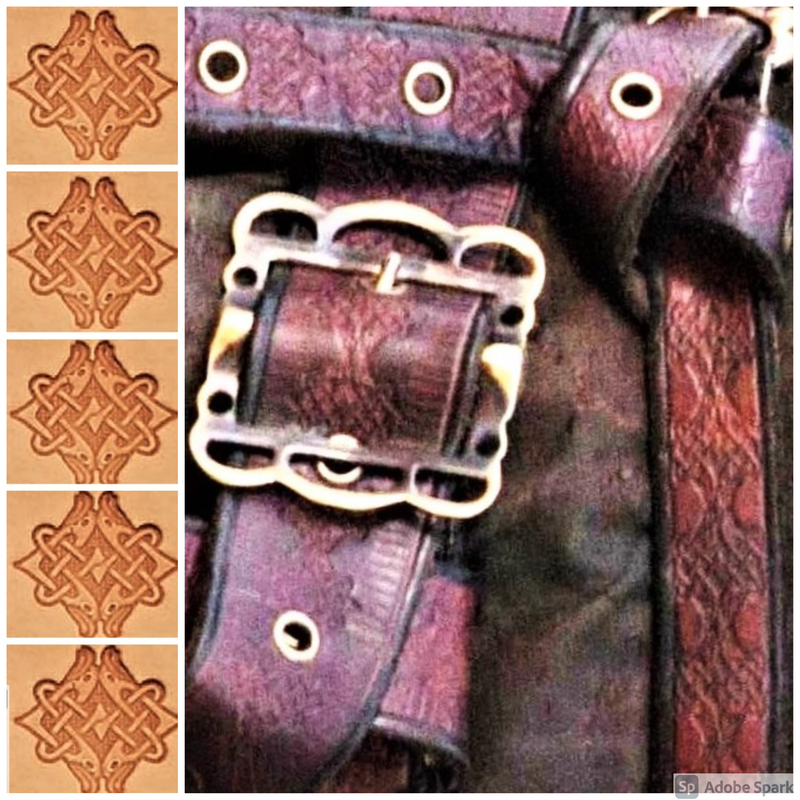 On the wide belt the stamp goes down the centre, and there's a stamped pattern of lines on either side.

Here are the belts with the stamping, and border treatment, compared to a screen shot. My belts are very close to screen accurate, however I did the stamping after the grommets had been done, so I had to stamp in between them. On the original the stamping was done first with the grommets put over. I made many mistakes with these belts! Now I know how to do everything correctly, I plan on making new belts done right from the start.

Still the upper buckle is not correct as you can see. I've not been able to find that buckle! 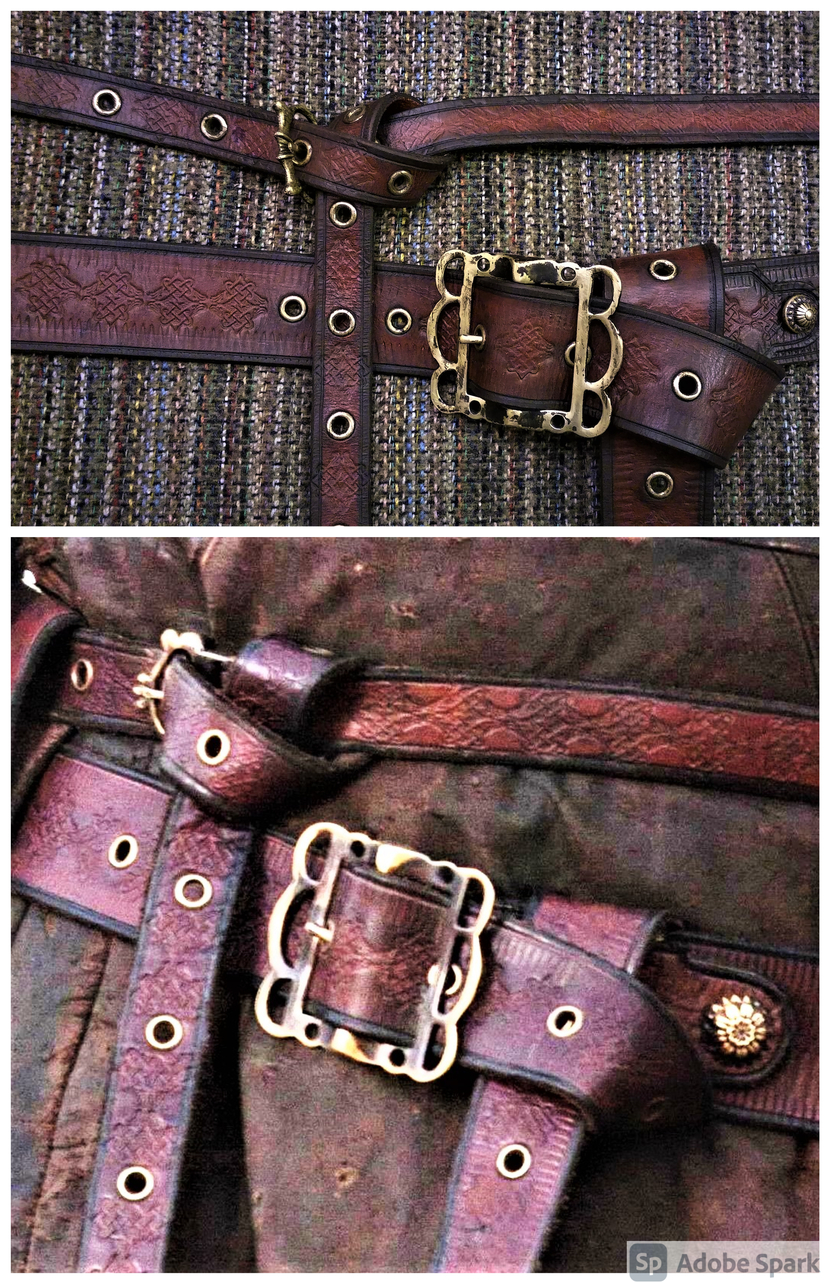