This is hilarious, just how some people try to break **** down.This photo got posted on a blog and someone gave me a heads up..

then at the bottom of the blog they try to break down the "meaning of a predator" i could not stop laughing my ass off... 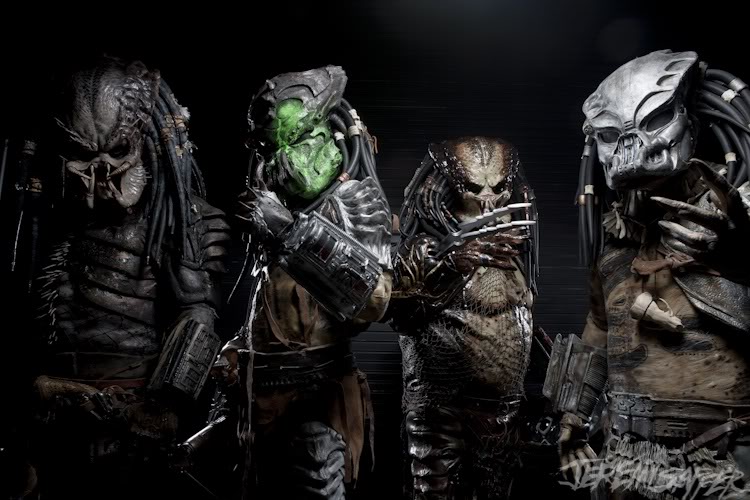 Andrew, last night and this morning I got two text messages with the same photo from io9 attached. The text came from two of my friends that have been in my basement and seen all the Predaphenalia. Your photo got their attention and the comments were "How frikkin cool is this?!" and "Check this out: there's more people like you!"

I am pretty blown away by how your pictures with Arnie (and all the other amazing ones) have traveled across the internet and pretty much made you famous! Not to mention increased the traffic to the Lair. That's pretty awesome...kudos Andrew!

but according to the article i'm just a gay marine predator.

Sitting on my first day here on set in Winnipeg and it gave me a big laugh.. Thanks Andrew

your hand shake with arnold was on the chive today as well lol
Last edited by a moderator: Aug 2, 2017

kinda cool to read everyone take on the photo outside the lair.

if it pops up in your daily surfs...always send them to the lair.

the more the merrier

Funny, I read a full article about the &ldquo;homosexual erotica and symbolism&rdquo; hidden in the film Predator ( 1987) a good while ago. I may still have the link to it. The one in the link you provide seems to contain an excerpt of something derived from the original article..plagerisim???)

The piece I had read, from what I can recall, was far more detailed than this and was basically stating that, Predator (the film) represented homosexual behavior and the risk of aids. Dutch and team, being the practicing homosexuals and the Predator( the alien); the disease; H.I.V.

&lsquo;Billy&rsquo;, was the most effeminate of the men, according to the article, as his cuts ( the ones made across his chest) represented female vulnerability and him ( Billy), opening himself to the Predator. The article even, had the gall to say &lsquo;Billy&rsquo;s wounds also represent a
&ldquo; menstruating woman &rdquo;
&ldquo;Billy&rdquo; so easily gave himself to the Predator and.... died. Or, gave into his homosexual desires and succumbed to aids .

From what I can recall- it&rsquo;s been years, The Predator ( alien) wasn&rsquo;t directly seen as gay, where this article says he is. According to the original article, The Predator, was the metaphor for aids, he was &ldquo;gender less&rdquo;
I&rsquo;ll post the link...hold on a sec...or two!
~Estelle
found it!
"One CUTE Mot&@er F@c&er!"
http://classic-horror.com/newsreel/homosexuality_and_the_threat_of_aids_in_predator

wow i knew i needed therapy for years....
so what does this say about other classic monsters???..

the creature from the black lagoon ...you dig sushi?

Dracula: you want to sleep in a coffin?

Frankenstien...you want do do a zombie?...

get my point?....you can break stuff down and apply any meaning to it...

Who's genderless? The Predator is the ultimate man's man--but not in the gay sense. He hunts and is into weapons. He keeps trophies.

He also has a belly button, which means he's the product of a live birth and a mammal of sorts, which means he has reproductive organs of some sort, and he has no mammary glands, hence he's all male.

However, if one examines P2, the Predator there is referred to as having a vagina for a face by Mr. Danny Glover. Taking this a step further, the Predator does indeed represent the temptations a potential sex partner for the modern man, but the sharp mandibles and teeth surrounding the female anatomy no doubt make a point against the dangers of unprotected sex (i.e. poke that and you could lose your tallywacker). It makes a strong underlying statement for wearing a raincoat before diving into the pool.

Furthermore, flashforward to Gary Busey being sliced in half. This scene is an all too obvious cue to a man going through a divorce, with everything being "divided in half." Many people miss that one, but those who have been through a divorce--or who have fallen into a meat grinder and lived--know exactly what I'm talking about.

The part I'm still trying to work out is the significance of Danny Glover turning white at the end.

kithunter said:
get my point?....you can break stuff down and apply any meaning to it...
Click to expand...

So, true..That was my first thought upon reading the article for the first timer....The lengths some go, to read( or write) **** into things that aren&rsquo;t even there!

Slave 1, in the article, &ldquo; One Cute MotherF@c&er&rdquo; the Predator is seen as a metaphor for Aids; which is a disease. A disease is nether male nor female,it&rsquo;s genderless, and will effect both male and female.
This is the authors interpretation.
of the film.
~Estelle
The Predator&rsquo;s &ldquo;belly button&rdquo; is only indicative of him being a product of a &ldquo; placental birth&rdquo;, some reptiles are also &ldquo;placentals&rdquo;, boa constrictors give live birth. The Predator is an alien, even understanding the most basic aspects of his biological nature is complex at best. We can only guess. But I agree in that he&rsquo;s not a &lsquo;reptile&rsquo;, as we understand reptiles.

Hmmm, I was losing interest in the Predator character, this definitely brings me new inspiration. I'm gonna create a new type of Predator called the Rainbow Yautja. His bio will be rainbow colored and it will be all decked out with jewels and crystals. Bling!

Estelle said:
Slave 1, in the article, &ldquo; One Cute MotherF@c&er&rdquo; the Predator is seen as a metaphor for Aids; which is a disease. A disease is nether male nor female,it&rsquo;s genderless, and will effect both male and female.
This is the authors interpretation.
of the film.
Click to expand...

Yeah, I got that.

I noticed this pic bizarrely in one of my mates Facebook feeds on something he has read on Yahoo. I don't think he know's I'm working on my own suit. I'll have to get his take on it when I speak to him next.

You're still famous. Found this on DevArt: