This could be superb trailer for whole movie.
A predator hunting in bigest conflict in whole history, world war 2. somany preys, so many hunts and trophys to get.
So many days for killing and hunting.
This could be really interesting.
Iam planing to do some short scene but iam lack of Nazi clothes, any ideas-suggestions from where to get them?

Same we could do with IRAQ conflict, Serbian conflict, Wherever, whatever, in ANY KIND OF TIME.
This is what i love and like in predator concept, u can change time, u can change place, anything.

A predator in age of Greece, or anywhere any year, AMAZING...
M

I like this one alot. Ideas are just popping into my head....keep going on this. I would love to hear more.

You should check out the Dark Horse comic Bloody Sands of Time.

It has Predators in the trenches in 1918 for World War I.

Destroyer said:
You should check out the Dark Horse comic Bloody Sands of Time.

It has Predators in the trenches in 1918 for World War I.
Click to expand...

You mean this one?

I saw in one site that there are lot of predator comic, also pred vs alien, vs superman and so on.
There was even predator cold war and other interesting stuff, really nice source for ideas and storys. 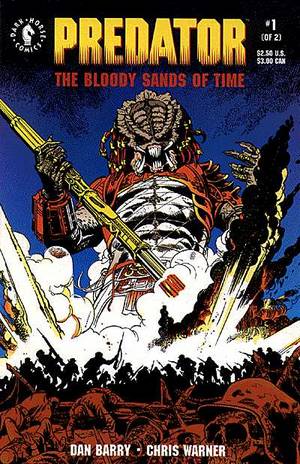 True, and I personally don't want any of them in film.

But the concept of predators showing up in various wars as a great introduction for Predator characters. Think about having a short scene, much as described, followed by a blackout, fade in of titles/credits, then cut to another scene and so on and so forth.

Personally I think Concrete Jungle, the first Predator story by DH would have made a great movie...

As would the first Aliens vs Predator story with Machiko Noguchi, much better than AVP...
S

Hate to rain on your parade, but Predator 2 IS Concrete Jungle, most key-scenes where directly taken from the comics, and proving my point: good comicbooks don't always make good films. P1 was by far superior to P2.

But sure, take some influence and go from there, I'd say...

Skullsplitter said:
Hate to rain on your parade, but Predator 2 IS Concrete Jungle, most key-scenes where directly taken from the comics, and proving my point: good comicbooks don't always make good films. P1 was by far superior to P2.

But sure, take some influence and go from there, I'd say...
Click to expand...

As i sayed, predator concept is infinitive space of creative work.
One just need good team, good idea, money.
Then the shooting can start.
Anyway i want to make full movie of predator becauase it would be honor for me.
I dont think i could put it in theater since i dont have rights for that, it could be nice to get them, but also expensive
Looking forward to read any predator movie ideas!

I agree that many of the scenes from Concrete Jungle were lifted but Predator 2 could have been so much better.

First reveal of the Predator against the blown out window... the penthouse scene doesn't compare.

Predator ships cruising over New York as seen through the captured Predator mask.

Final battle and the Predators leaving the hunting ground because of the rain and lack of sport.

Harrigan was a poor man's substitute for Dutch's brother.
S

All point you named would've made the movie even worse IMO, LOL

P2 tried to match the book too much, just look at the cloathing of the characters...
The portrayal of characters, the camera-angles, everything has a very comic-book feel to it. Much like Aliens, but with the difference that Aliens benefited from the approach.

Keep the Predators a mystery, I don't WANT to know about their families or homeplanets, I just want a bad ************ with plasmacasters strapped to his shoulders, but mean, lean, pure agression with a hint of rituals. Keep the films independent from each other and only let some of the previous films shine through (merely a cameo of facts).

in keeping the spirit of the thread....

this bio was taken from a hunter on the sands of iwo jima.... 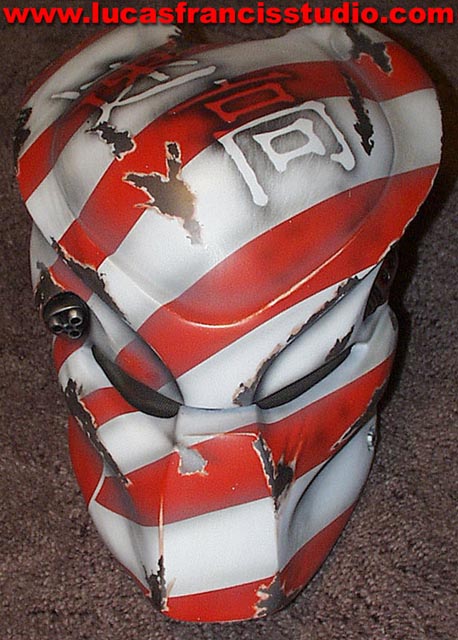 I've also heard of a similar "helmet" found during the early days of the Blitzkrieg in eastern europe....I have yet to see it though.

I know this is an ancient thread but I just stumbled across it.
The Predator movie they never made that I think would be great was having one at Iwo Jima. In Predator 2, Gary Bussey’s character specifically mentions one having been spotted there. I even tried to pitch a comic book story about that for Dark Horse, but I never heard back from them. I even drew a color drawing of a Marine with Tommy Gun, just starting to look over his shoulder with a uncloaked Predator getting ready to use his knife-claws on him (I need to dig that drawing up and scan it, as I know where it is).
I did the title with the Predator logo, was going to call it, “Predator – Semper Fi”