I thought this might be of interest. I recently aquired an original studio script for Predator 2, it is the first draft and I got round to reading it last night. I was most interested in knowing what differences there were to the final film.
Most of the characters, names and dialogue is the same though Jerry is named Tony and doesn't have any jokes.
The opening scene is with the Scorpian who is doing a deal for weapons when the Predator drops in. Harrigan's team arrive and enter the building (none of the opening firefight with the police in the streets).
The next different scene is in a warehouse rather than a penthouse apartment and there is no girl, here the guy is tied up by his wrists and is the shocked survivor found by Harrigan's team.
Danny dies the same but finds a Saint Christopher instead of the dart and the forensic scientist (a man) finds traces of a metallic oil on the victims which helps the Predator's blades cut stronger.
Harrigan is suspended after Danny's death and Tony (Jerry) and Leona continue to follow his orders.
The Predator also does a bit of walking, firstly through a park where he pick up the "give me some candy" line from a whining child. Harrigan and the others are driving while the Predator keeps up by running alongside. He follows Harrigan around the streets and goes into the taxidermy store to admire a stuffed lion.
King Willy dies firing and Uzi and his dreads are left on his skull. The trophy cabinet is a diamond of jelly which they are placed into leaving a space at the top for one more.
Leona also dies at the blades of the Predator on the subway, no mention of being pregnant as she is celebrating her 35 birthday with her husband and already has two children.
Peter Keyes lead the OWLF unit but doesn't enter the meat packing building, he watches on the screens and has all of Garber's lines. Dutch and Anna both gave one line on the screens. Their events were in 1984, this movie is set in 1994.
The Predator flees from the slaughterhouse with Harrigan pursuing across rooftops, firstly climbing the next building's extra five floors by the crumbling fire-escape. Then when the Predator jumps a forty foot gap to the next building Harrigan has to use a piece of cable to slide down two heavy duty power cables to catch up.
The old woman was to be played by Billy Crystal. Harrigan has to run down the stairs when the Predator escapes down the lift shaft, the fight agin in the basement and through a fake wall where the brickwork is a Predator hologram. Then through to an abandoned tunnel where they fight to the predator's death outside the spaceship and the clan appears and gives him a 1640 flintlock. He walks out of the lobby to reporters and police and walks round to find keyes standing by the newly exposed tunnel exit to say "we came so close".

Another alternate version I have is a storyboard sequence where the Predator finishes himself honourably in front of the clan with a sword.

Interesting! Thanks for sharing this.

Very interesting to read about, where did you get the script?

The script came from someone who was employed at Fox. I have to correct myself on the storyboards, I must have seen that different somewhere else. My boards show the Elder striking the killing blow to P2: 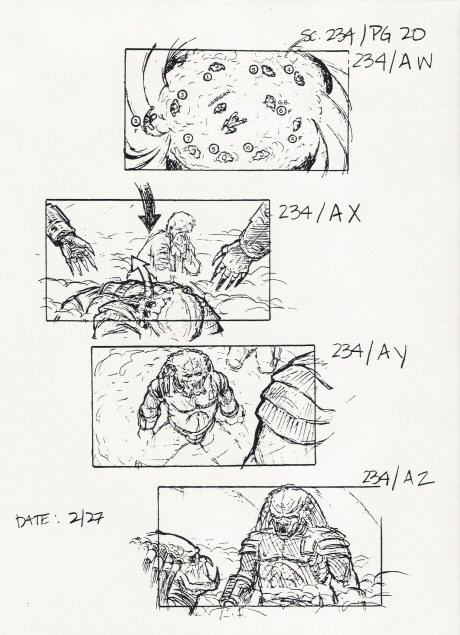 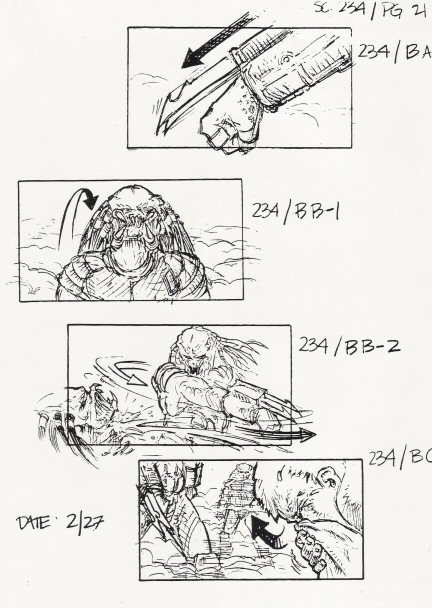 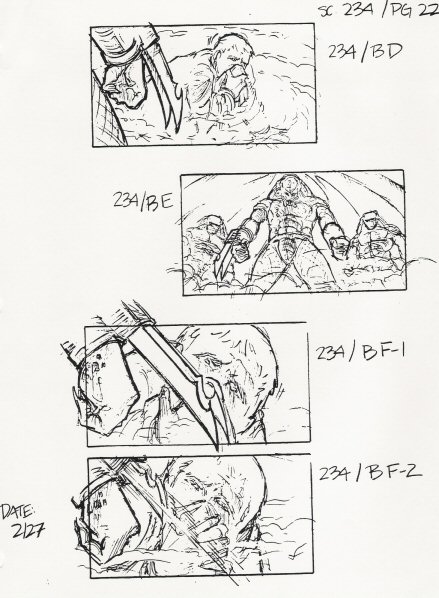 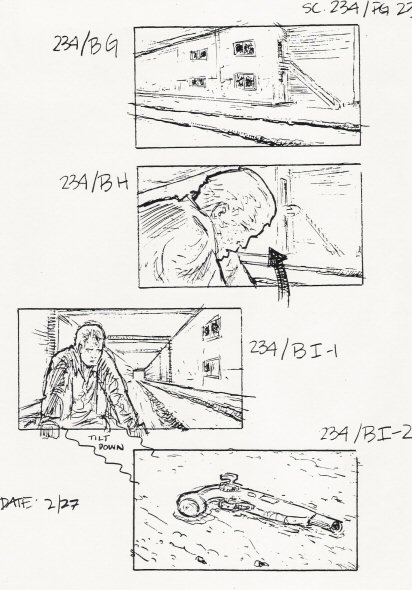 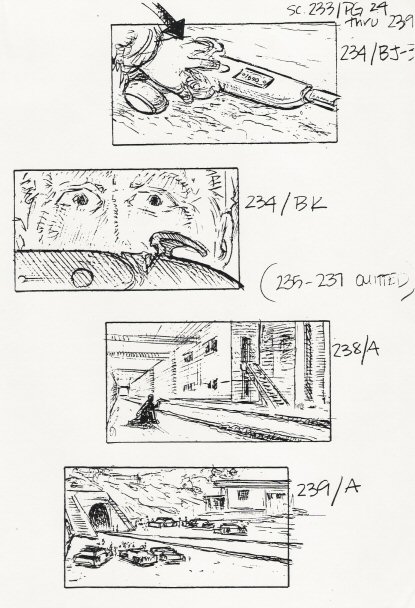 wow cool, i wish someone could get a hold of some more behind thes scenes stuff that fox must have.... like some more lost hunter pics etc..... sweet stuff tho dude!

extremely cool indeed. great alt ending stuff there, i take it the concept musta been the Elder dispatching the P2 for the dishonour of losing the fight?

I wonder why they changed the last scene with the predators, the Elder killing P2... Think it would have worked too.

Thanks for showing the storyboards - those were cool! I'm glad they didn't use that ending tho...

Very cool.
I picked up the novelisation of P2 last month and it has the elder killing the pred ending, though most of the final cut version of the movie is in it.

There really isn't much around except for pictures shared between fans. When the Stan Winston Studios site was launched they were starting to do behind the scenes stories for the feature films they worked on, Predator was covered with about five pics but they never did Predator 2. Most of the pictures turned up in the Winston Effect so I doubt there is much outside of Fox archives. I've also got some P2 slides but they are the same as what was on the special edition DVD, though they are numbered up to about 280 so there must be lots more we will never see.
Incidently, these storyboards were Kevin Peter Hall's. The same seller had many of his wife's scripts.
U

Damn i totally missed this thred, looks like it got bumped to the 2nd page by ******** threds grrrr.

man are those actual P2 storyboards?...

Hmm, never knew that was the proposed ending. Thank you for the storyboards, Predian!

TDJC said:
Very cool.
I picked up the novelisation of P2 last month and it has the elder killing the pred ending, though most of the final cut version of the movie is in it.
Click to expand...

I wondered if the novel ending was based on an actual script, mystery solved.
They incorperated a variation of the Predator being killed/offing himselve in the 1st Batman Vs. Predator series.
Cool find

I never knew Hall did boards for P2.... or that he even drew. Very neat, thanks for uploading these and the info.

It's good to see more people enjoying the scans, I have only seen one other storyboard which was sold with a later draft script so these boards are a treat to see. I always wonder if this type of production item is archived by Fox but I doubt it, what little exists is mostly in the hands of those who worked on the movie. I got later P2 script and the seller said he was the gang leader on the train, I also got some call sheets from the guy who was inside the car that the Predator step on and the roof pushes down. He was also a stand-in for some of the lead actors to mark out scenes, he played a corpse in the meathouse. Both of them told me they got signed photos from Kevin Peter Hall as a funny apology for "killing" them.

greyback said:
I never knew Hall did boards for P2.... or that he even drew. Very neat, thanks for uploading these and the info.
Click to expand...

Hi Greyback, he didn't draw them himself, they were previously owned by him as he used them to reference his scenes. They were sold along with other pieces including stuff from Harry and the Hendersons.