Little bit of background here, I am an active LEO in the states and, unlike many of my compatriots, really never got into the patch collection/trading scheme. Probably because my department is unreasonable skimpy on spare patches, but also just in a general sense. But the thought of a patch display did sort of appeal to me, so I decided to tie together profession and my appreciation for the cinema and began collecting suitable patches over the course of several years. Also, tried around 15 angles and lighting options, could not figure out how to get a good readable shot without showing you guys a reflection in the glass of me, the far wall, or a light source. 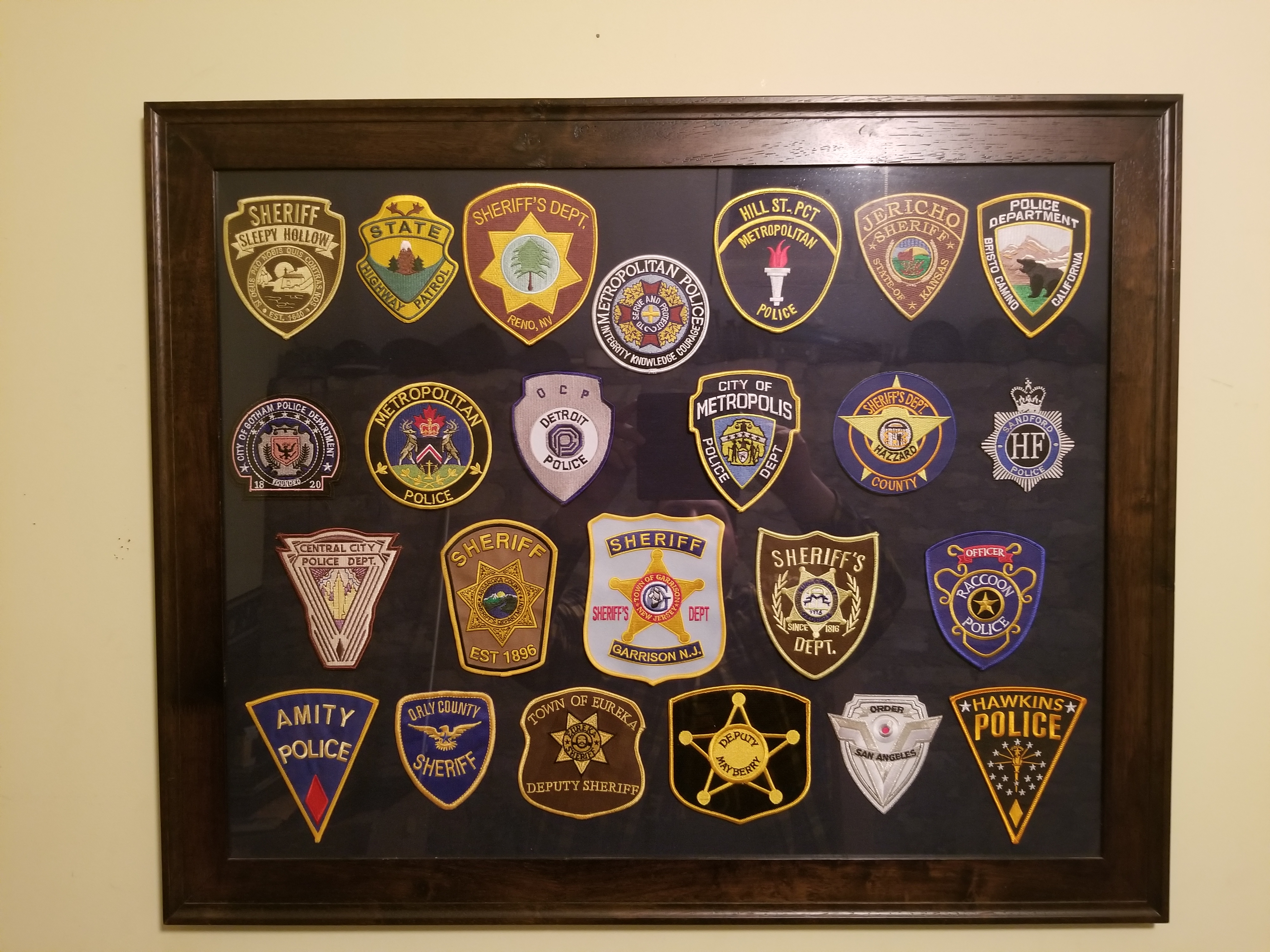 Put it in replica props as these are nominally all replicas, though the Orly county and Copland ones are....odd. Were both sold very cheap, different sellers who didn't have anything film related, years apart, not associated with either production in the name or description, and are both near unknown productions today so not sure why anyone would reproduce them, especially as a one off. Do have a screen used "Harlan County Sheriff" patch from Justified but it is not on the board yet.

Decided to limit myself so it never gets unmanageable, so one patch per IP/Show (I found 4 different takes on the Gotham PD patch, from various shows, plus special unit patches for SWAT, EOD, etc). If possible, go with the patrol version (full color Flashpoint patch was difficult to source vs. the 'tactical' subdued version), stick to state/local departments, and no patches from real organizations (Justified used both the correct and a fictional version of the KSP patch, neither would be included here).

The fun thing is, have had many other cops in my home over the course of the 2 or 3 years it has been complete, most gloss over it, few comment on it, only one has realized they're all fake. I think the only one that really looks out of place is the San Angeles one, might replace it or add to the collection as various patches catch my eye and/or become available, though I'd call it largely complete now.

Nice patch collection, very cool that you're collection only fictional PD patches. It really says something about the various show's art/costume departments did such a good job in designing their patches that only 1 cop that's seen your collection actually realized that they were all fake.

Nice collection. I like to collect fictional police patches as well, I have Twin Peaks Sheriff Department patch, Hill Valley Police Dept patch from Back to the Future, King County Sheriff's Department from the walking dead. not much so far but little steps.

absolutely, as I said up there, took me several years of just nabbing patches here and there, it was something that was always on the back burner and it seems various patches come and go in spurts. Never found a Hill Valley one for instance, wasn't looking on ebay at the right time I suppose.

Master Chef said:
absolutely, as I said up there, took me several years of just nabbing patches here and there, it was something that was always on the back burner and it seems various patches come and go in spurts. Never found a Hill Valley one for instance, wasn't looking on ebay at the right time I suppose.
Click to expand...

I was lucky to get the Hill Valley one here on the RPF.