Hi everyone! I'm pretty new here and just floored (and a bit overwhelmed) by how much cool stuff everyone's sharing/crafting on the RPF.

For any kids of the 80s (or anybody who loves Johnny Five), I thought I'd share this little guy who lives in my apartment: one of the toy robot props from the Short Circuit sequel. I made a video about these props and how we repaired this one:

I grew up watching the Short Circuit films way too much. We didn't even have legit copies of the movies (remember how VHS copy protection made the colours all weird?) and I still wore out the VHS tapes. There was something about this robot and his performance that just grabbed me. And seeing little toy versions of him rolling around made me crazy for one.

Year after year at Christmas, I would ask Santa for a Number Five toy, thinking elves in his workshop would make one just like in the film. Kid brains think anything is possible, right? As I got older, I used any excuse to make one myself. Tons of Lego versions that I kept refining. For my fourth grade 'structures' unit, where all my classmates were making models of the CN Tower or a famous bridge...I made a toy-sized wooden Number Five. Yeah, I was obsessed.

Fast-forward to adulthood, when I understood these were cheesy 80s movies but still had a soft spot for them. One day, work sent me to a film set for a commercial shoot. Here's where my years of obsessing over these films 'paid off': I recognized one of the crew members there from behind-the-scenes photos of "Short Circuit 2". Yeah, I know. It's almost sad how obsessive I was. Anyway, we became friends, and one day I told him about how kid-me was obsessed with those Number Five toys, and he said...

So of course I asked if he'd bring it to our next hang-out so I could see it. And given that it was well over 30 years old, it was in pretty good condition. Some bits were broken, some parts of its head were missing, but here it was. That toy I'd been dreaming about my entire childhood. And of course, it's really not a toy. It's a crazy-fragile prop that would've been pretty crazy-fragile while they were filming in 1987. Seeing the effect this thing is having on me, he offered to let me hang onto it for a while (I rode the subway home with this thing in a file folder box, which was pretty nerve-wracking).

When my friend asked if I'd repair the broken/missing bits, I of course agreed to — by this time, my wife and I were doing a lot of film prop and puppet building. With the help of the Johnny Five builder's group called Input-Inc., I repaired the prop's missing/broken bits (a combination of 3D printing and some moulding and casting) and painted the new bits to match. And when the thing was more or less looking as it did in the movie, I stared at it. And stared at it.

And then, of course, I asked my friend, "Hey, how badly do you want this thing back?" And he, being the wonderful human that he is, offered to sell it to me. And now Number Five hangs out in our apartment, looking for more input.

I guess I never got over my obsession. 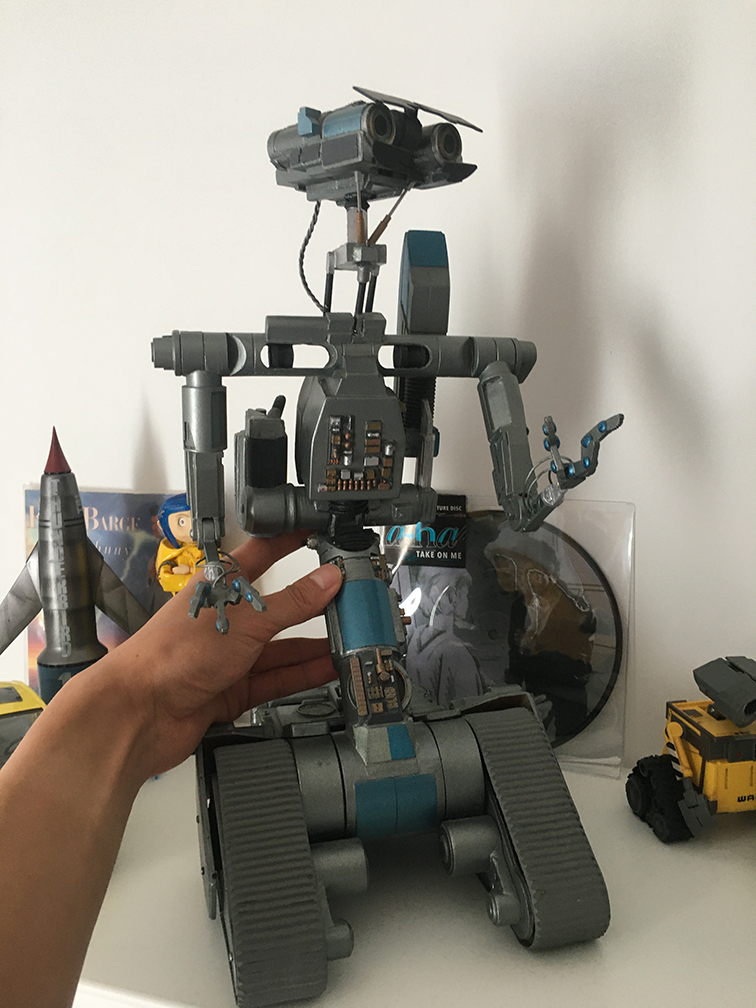 Very cool!
I wanted one of those too, when I was a kid.
I'd love to see more details about the restoration.

RPF PREMIUM MEMBER
That was some friend!

RPF PREMIUM MEMBER
Soooo cool! I think I watched Short Circuit 2 more when I was a kid - it was probably the only one we had on tape. But who could forget the little Johnny Fives?! I gotta get me one of those.

Duncanator said:
Very cool!
I wanted one of those too, when I was a kid.
I'd love to see more details about the restoration.
Click to expand...

Beyond what's in the YouTube video, I haven't properly documented the restoration, so I'll keep posting stuff about that here for anyone interested!

Here's a photo of what the prop looked like when I first got it. It certainly had fared better than some other surviving ones that have turned up over the years. I think my friend was overall quite careful with it, but at some point one of the forearms had snapped apart, and his entire neck had bit the dust. The wrists are teeny tiny, so they'd been broken. The eye flaps on all these props go missing since they're so fragile (at least one toy in the movie has broken ones on screen).

On the photo of the back below, you can see the cavity within the lower body/boom where the R/C receiver went in the motorized versions. On the real full-sized J5, that's just a hollow area inside the lower structure. 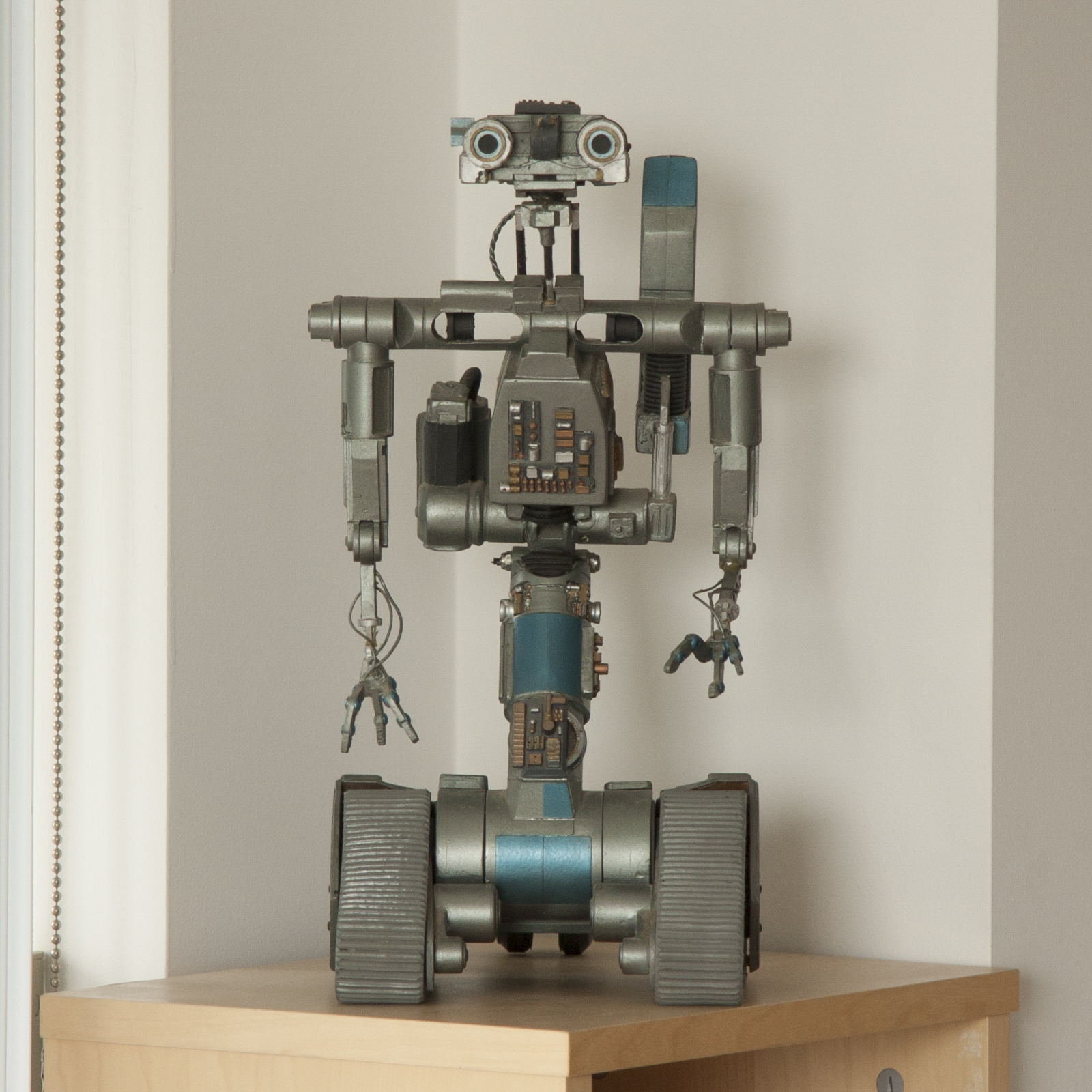 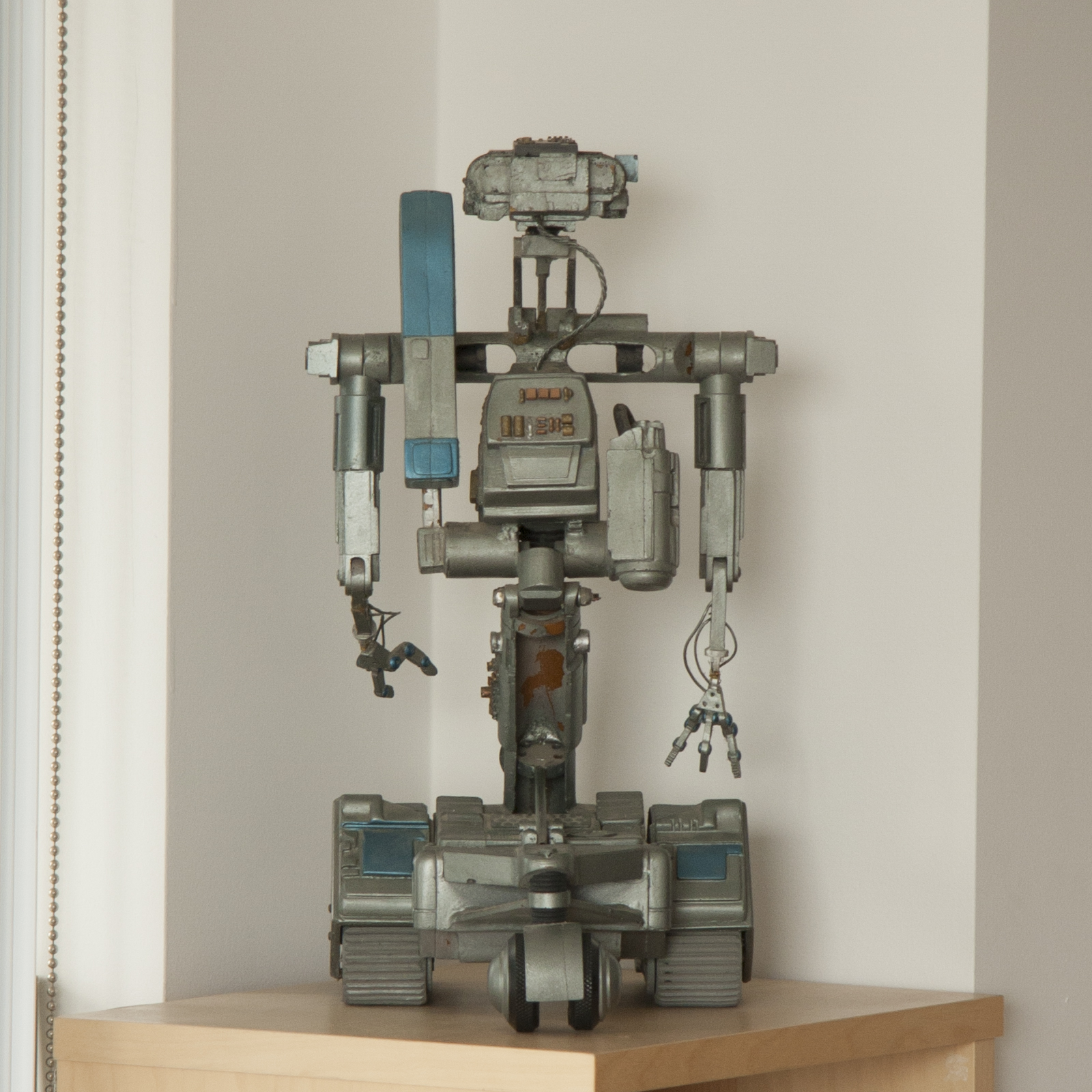 It sounds like yours was a static prop originally.
It looks like you added R/C controls to it from the video. How did you go about that?

Duncanator said:
It sounds like yours was a static prop originally.
It looks like you added R/C controls to it from the video. How did you go about that?
Click to expand...

You're right on, Duncanator — this was one of the many static versions seen covering the toy factory tables (they all look so similar, I'll probably never figure out which one it was!).

I wish this one had R/C! For the two shots in the video where it appears to move, it was just me pushing the prop (on the first shot) and doing a bit of stop-mo with it (for the bit where it drives out of shot).

Here's a photo from the restoration process, test-fitting the new neck components created by Input-Inc. You can see here that the lower neck assembly was completely separated from the shoulder tube/torso, and this was because this section had broken off at some point while my friend had the prop (some time over the 30 plus years), and he'd quickly glued it back together. So I took the opportunity to clear off the glue globs and do some paint clean-up where the three struts join the shoulders. 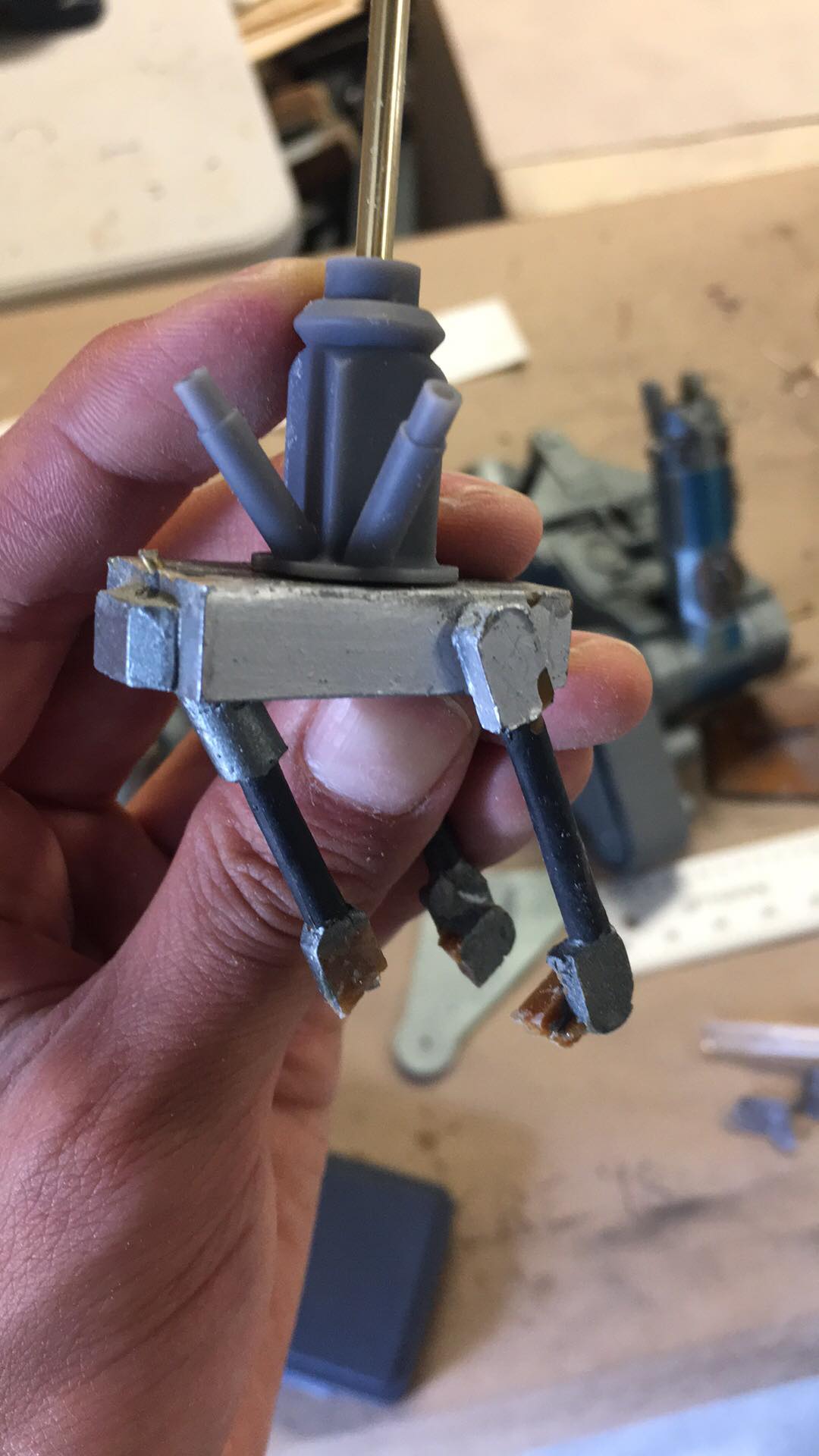 hubba hubba, holy smokes. Johnny 5 was a big part of my childhood too, except I'm guessing about 20 years later. This looks so good!

Hylanos said:
hubba hubba, holy smokes. Johnny 5 was a big part of my childhood too, except I'm guessing about 20 years later. This looks so good!
Click to expand...

Thats totally awesome....and I totally missed this thread when it was first posted last August.
I also grew up watching SC2 a ton, more so than even the first. I also wanted a small model of Johnny 5.
Its now been years since I've seen it....and wow, from memory, I was thinking those little guys were actually smaller, but they are a bit bigger than I was thinking.
How tall is it anyways?

JediMichael said:
Thats totally awesome....and I totally missed this thread when it was first posted last August.
I also grew up watching SC2 a ton, more so than even the first. I also wanted a small model of Johnny 5.
Its now been years since I've seen it....and wow, from memory, I was thinking those little guys were actually smaller, but they are a bit bigger than I was thinking.
How tall is it anyways?
Click to expand...

Isn't it strange that things in movies usually look bigger on screen, but these little guys always come across as smaller — it's about 15-16 inches tall! There's a bit of a range, since it can squat down or stand more upright, like the full-size one.

Even if I was to find a nice diecast one, or even styrene plastic but painted correct, that would totally be worth it, well, if not too much money anyways.