I started my first project of 2019...a scale model of the Nostromo Airlock from the 1979 movie Alien. I will be working from this Ron Cobb concept drawing and a handful of photos and frame grabs from the movie. 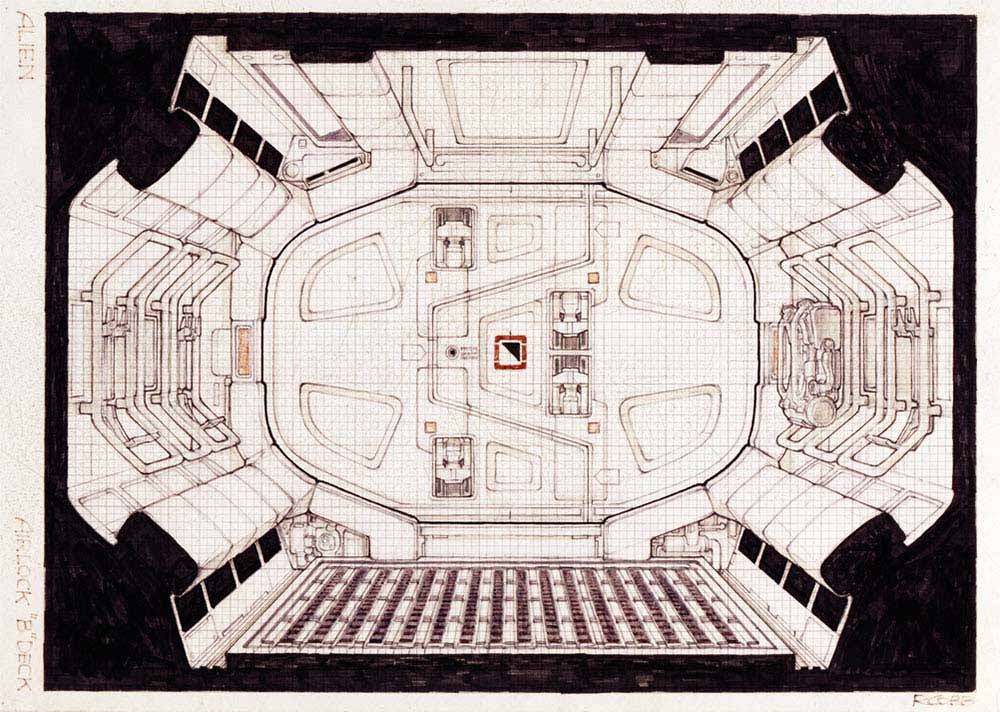 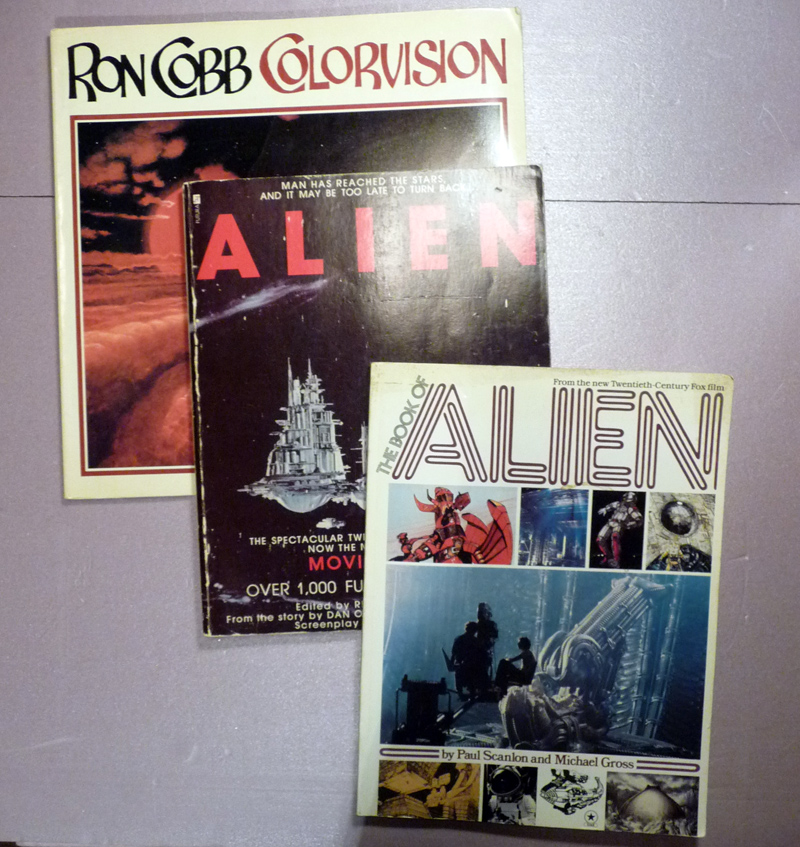 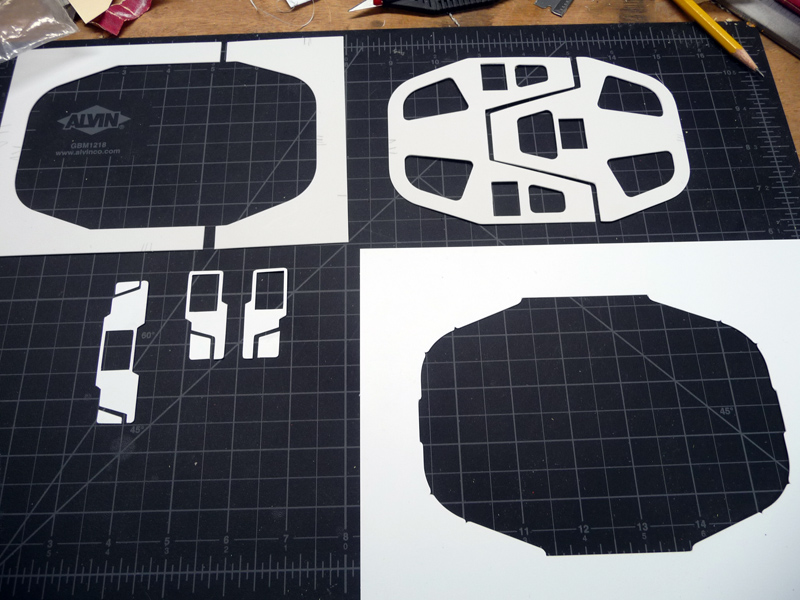 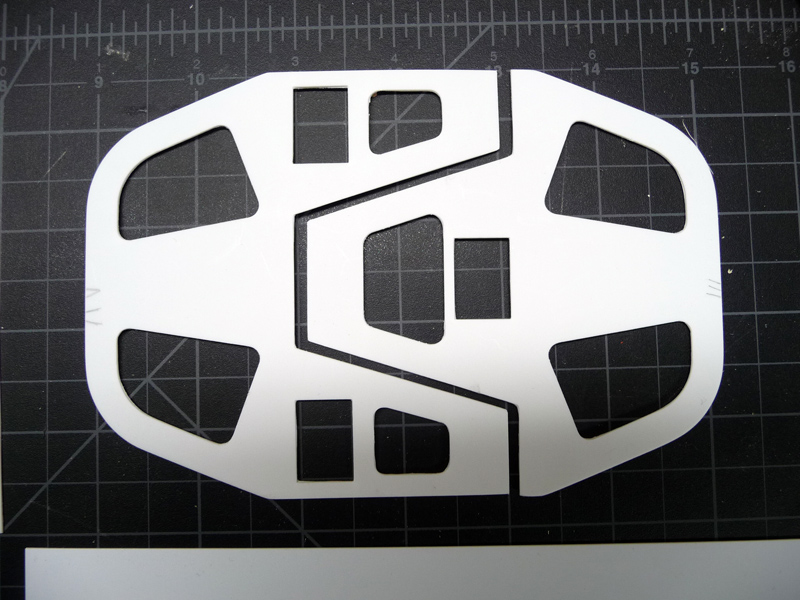 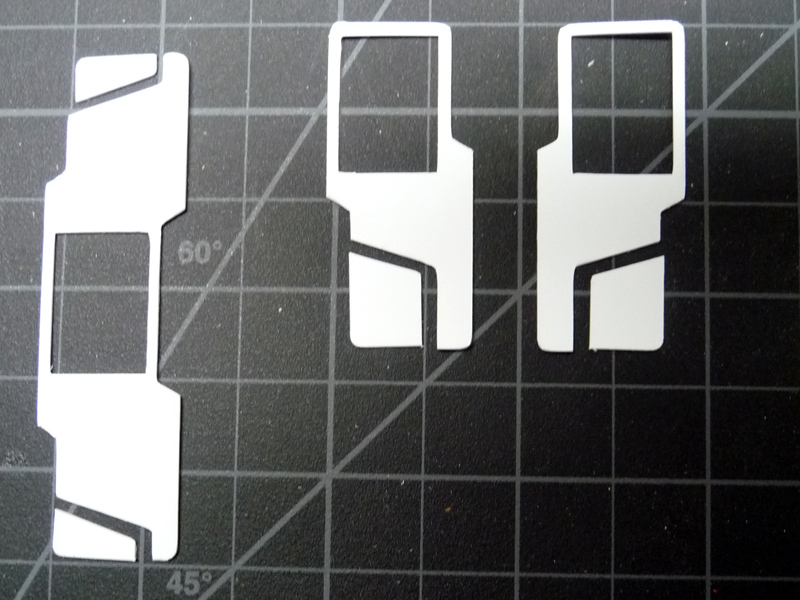 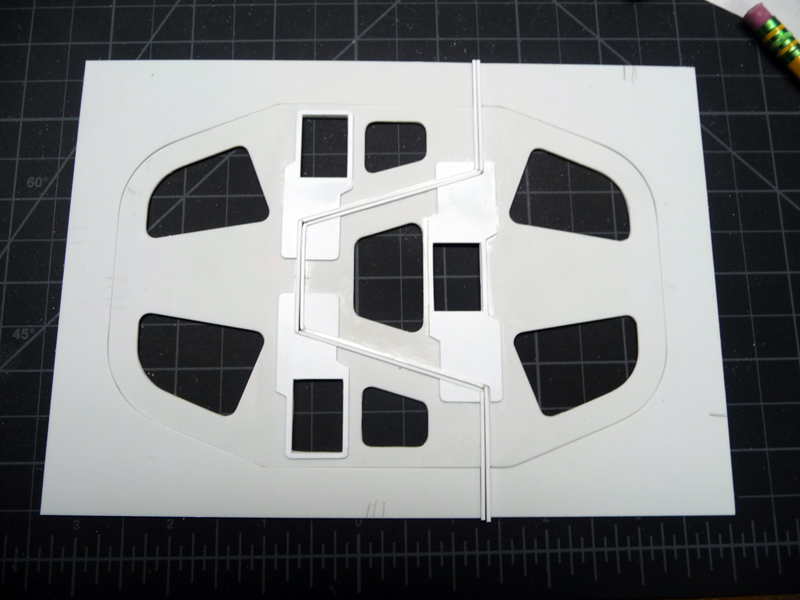 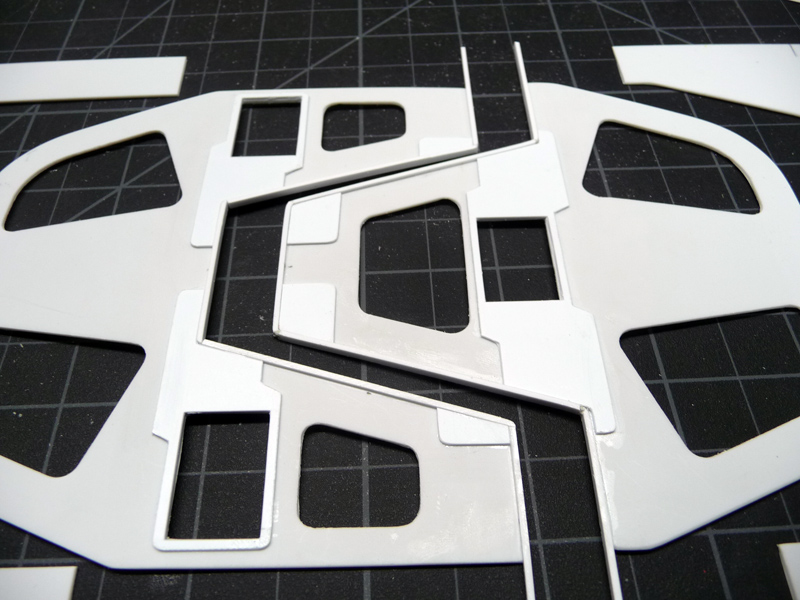 Out of curiosity, what did you use to cut out the shapes?

Analyzer said:
Out of curiosity, what did you use to cut out the shapes?
Click to expand...

I was thinking the same.. What clean cuts and the curved edges. Clean.......

Thanks!
I used a Silhouette Portrait 2 cutter. I just got it a couple weeks ago it was only $119 USD. The files where drawn in a CAD program and exported to Illustrator to be converted to .svg so they could be cut by the the Portrait. The machine is amazing. I never could have cut those out by hand in a million years. The doors are cut from .030" styrene, the raised panel details are cut from .020". The pieces were not cut clear, you still need to snap them out by flexing the plastic along the score. They do snap clean, even along curves.

I've really got to look into getting something like that. Very clean and precise cuts

Wow, sad thing is I have the Cameo 3.. Just no CAD experience. Very impressive.

For the indented areas on the doors, I printed some suitable positive shapes in polystyrene. I gave them a quick sand and filled in any low spots with auto body filler. 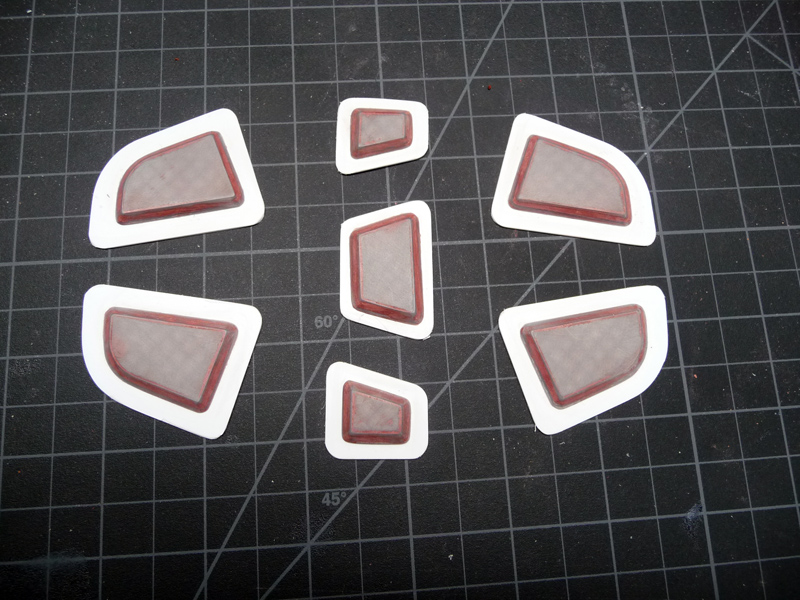 These were positioned on the bed of my vacuum former and a sheet of 0.5mm card was loaded in the frame. 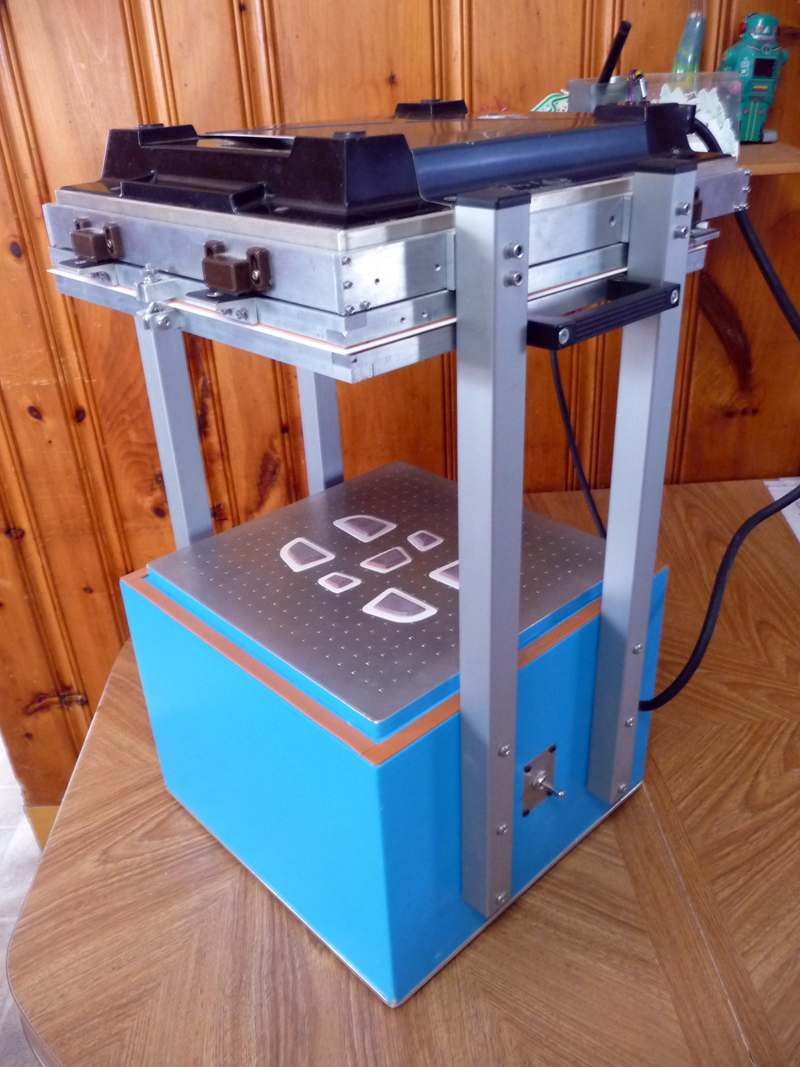 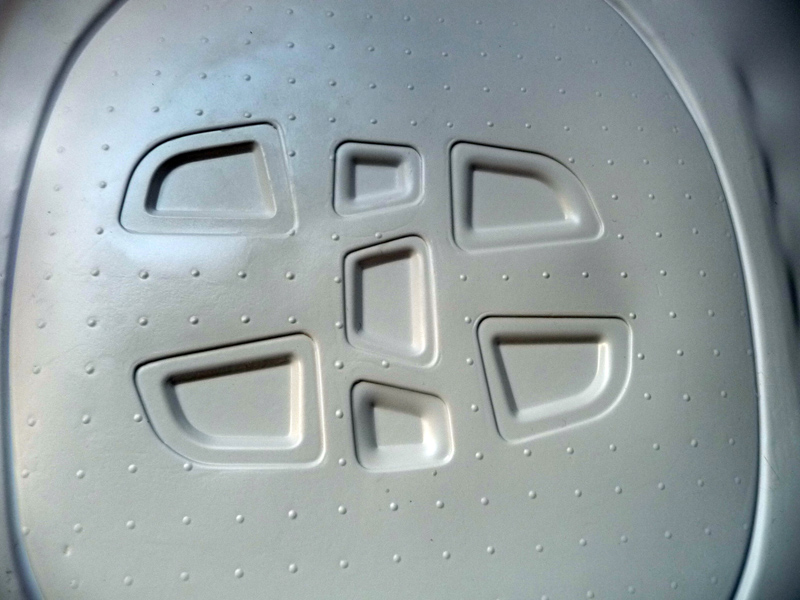 The detail is a little soft in places, particularly the two smallest dents in the middle column. I'll have to try a second pull to see if I can get those smaller ones to resolve a little better.

Here I've cut and glued the dents for one of the doors: 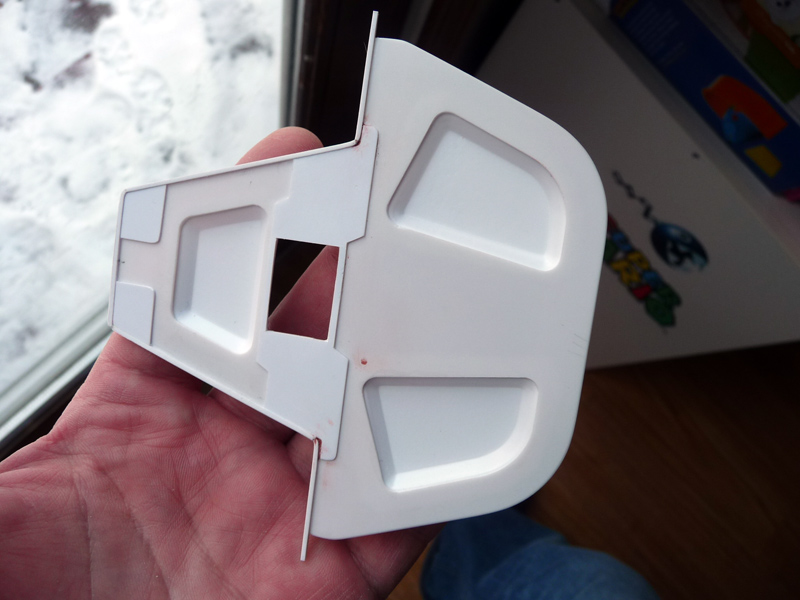 and the back side: 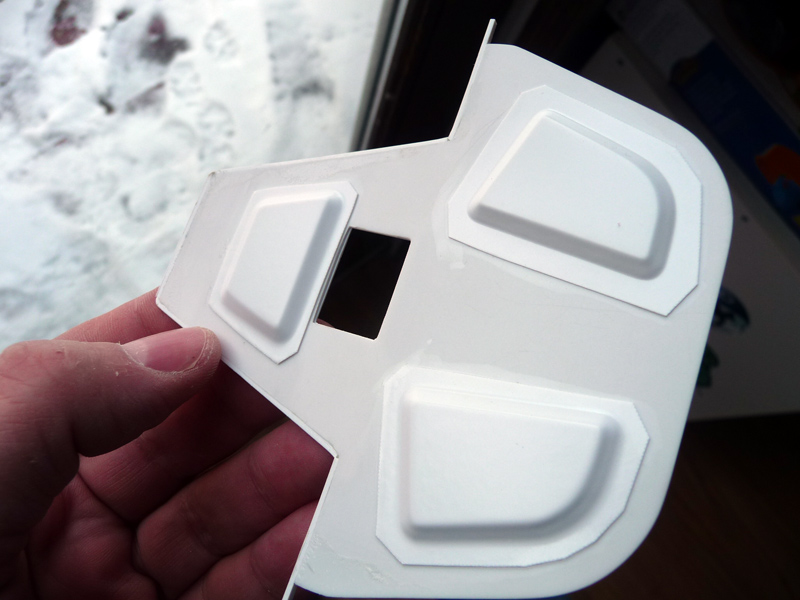 I'm very pleased this worked out. It's something I have been thinking about for a while: vacuum forming over a 3D printed shape.

This looks great. Is it in scale with the NECA figures?

portland182 said:
This looks great. Is it in scale with the NECA figures?
Click to expand...

Unfortunately, no. I wasn't really aware those figures existed.

Thanks for those screen caps! What an awesome resource.
J

Not sure if you've seen this one. It looks like they stayed pretty close to the concept drawing. Got it from Inside The Alien Shoot Part 3

JoeCS said:
Not sure if you've seen this one. It looks like they stayed pretty close to the concept drawing.
Click to expand...

I'm pretty sure that's an actual miniature used for the scene where they eject Kane's body.
I've been toying with the idea of building this as a shadow box sort of display and including the ship exterior- like your looking into the airlock from outside. This would be technically incorrect, because the view I'm showing is from inside the ship and the interior doors to the airlock are much smaller, but I think it would make for a really cool display.
Last edited: Feb 1, 2019

Thanks everybody. I really appreciate the encouragement.

So, I've been been running my 3D printer solidly, turning out all the "padded bits". I've got the ones that surround the doors pretty much done. These were printed in polystyrene, as I typically do. A bit warmer today ( -1° C), so I sprayed some primer on them, then ran in the house and hit them with the hair dryer.
Here they are arranged on a 1:1 CAD drawing: 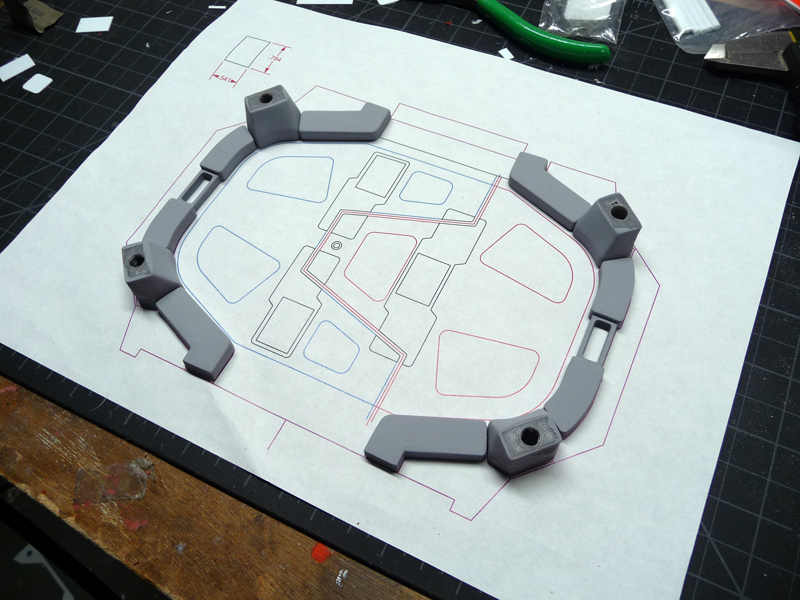 Something that's been troubling me is how I'm going to bend up the tubular racks seen on both walls. I made up a couple of jigs and tried my first one today. It's not perfect, but I think the technique has promise. 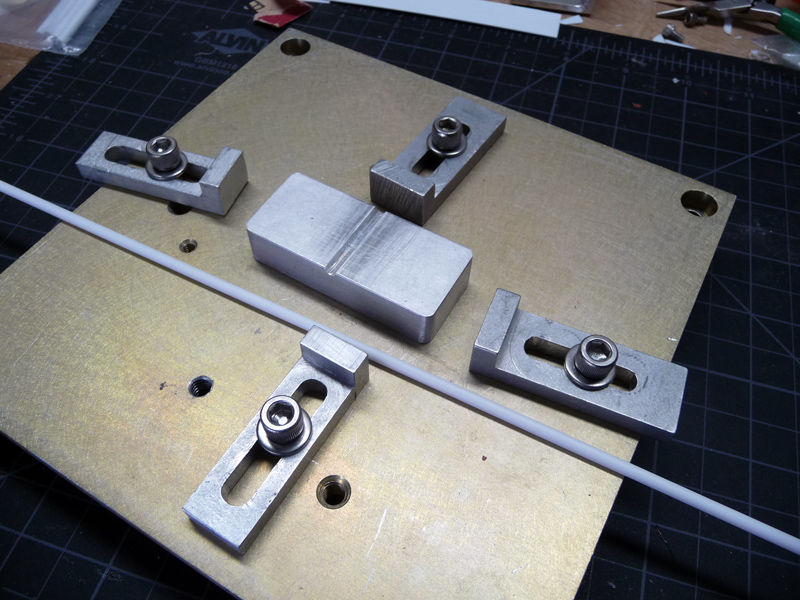 The aluminum block in the center is fixed in place by a couple of screws through the bottom of the plate. The 1/8" rod is held against the block with one of the clamps, then heated locally with a heat gun and bent. The next clamp holds it place and you repeat for the next one, working around the block. The two ends overlap each other. I remove it from the block and cut the overlapping ends flush with a razor blade. The groove in the top of the block is used to align the two ends while gluing. 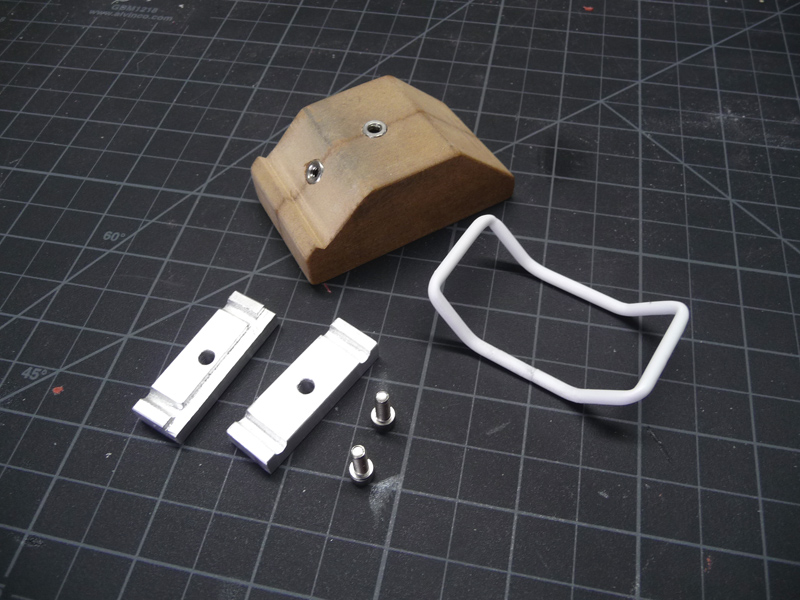 To get the two 45° bends, I use a second fixture. This is made from a piece of MDF. There is a stop at one end to align the frame to, and then clamped in place with a small piece of aluminum. The nuts in the MDF were pressed into a slightly smaller hole with my vice and secured with a little cyanoacrylate.
I heat the rod again locally with the heat gun and bend over the form and install the next clamp. The last side is heated and bent but held by hand while it cools. The picture below will help: 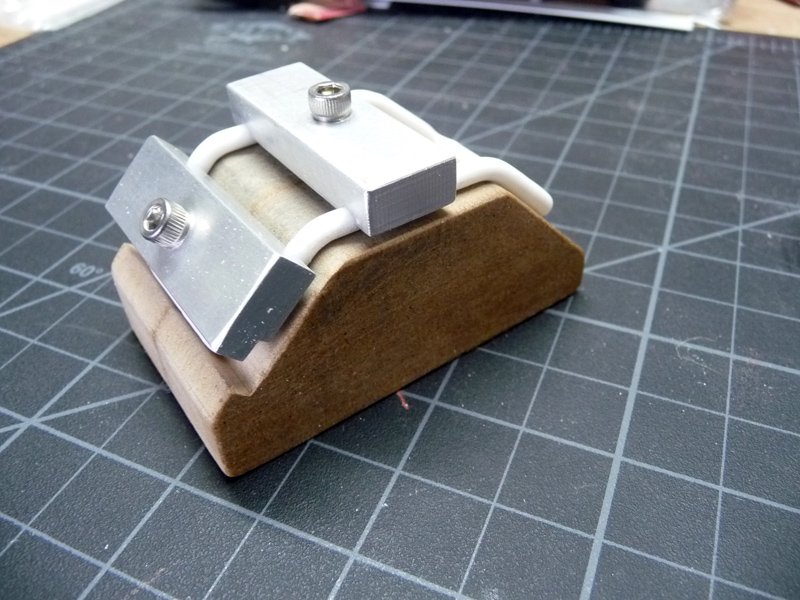 For the legs of the tubular racks, I made a jig that will allow me to drill a 1/8" hole exactly in the middle of the rod. Here's a test piece: 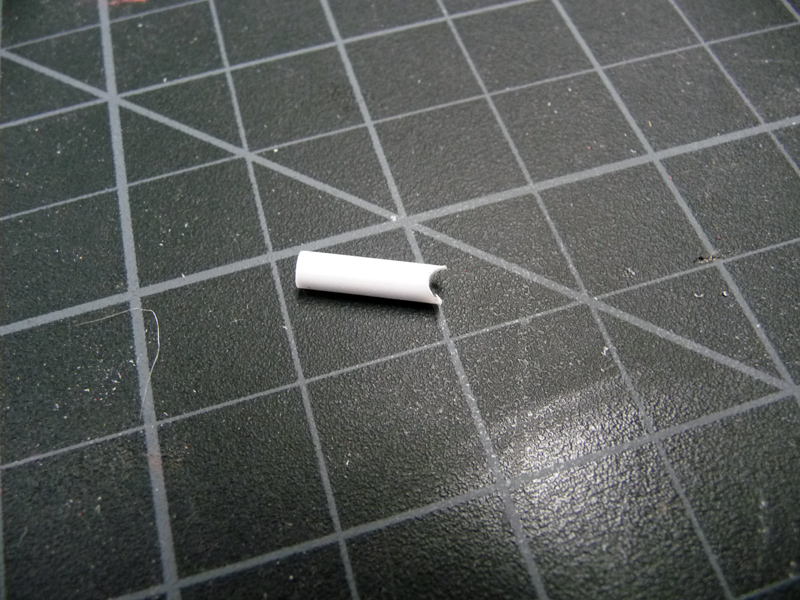 That's it for now. Thanks for looking in.

Some progress this weekend after not working on this for a couple months...

I cut out and glued up the wall sections that will make up each side of the room. 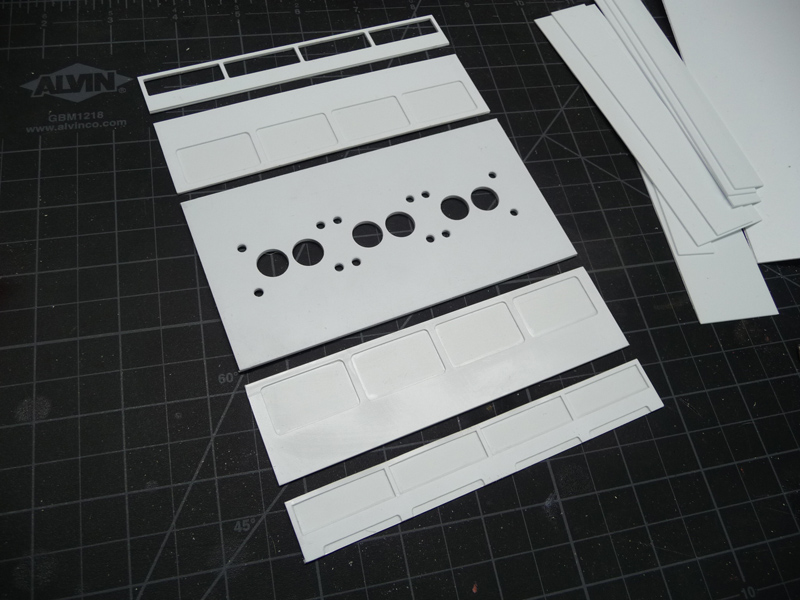 I designed a simple frame to support the wall sections at 45 deg. 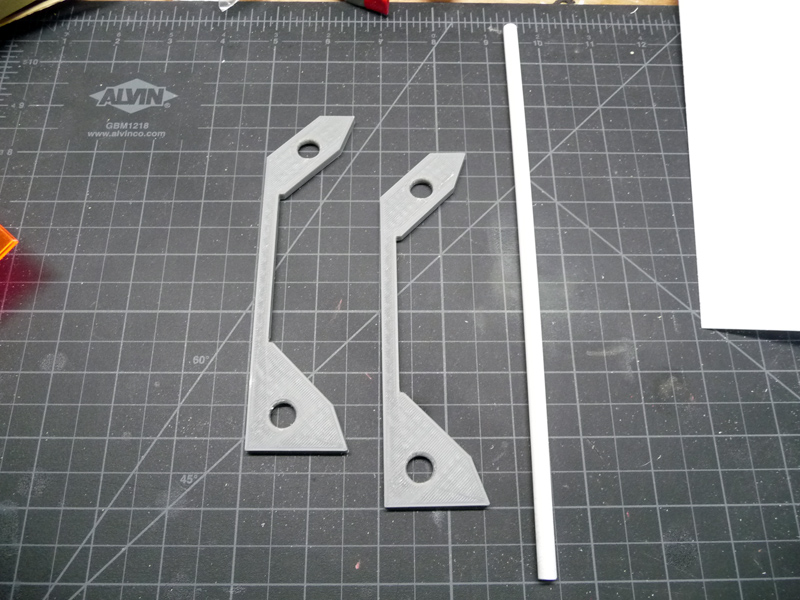 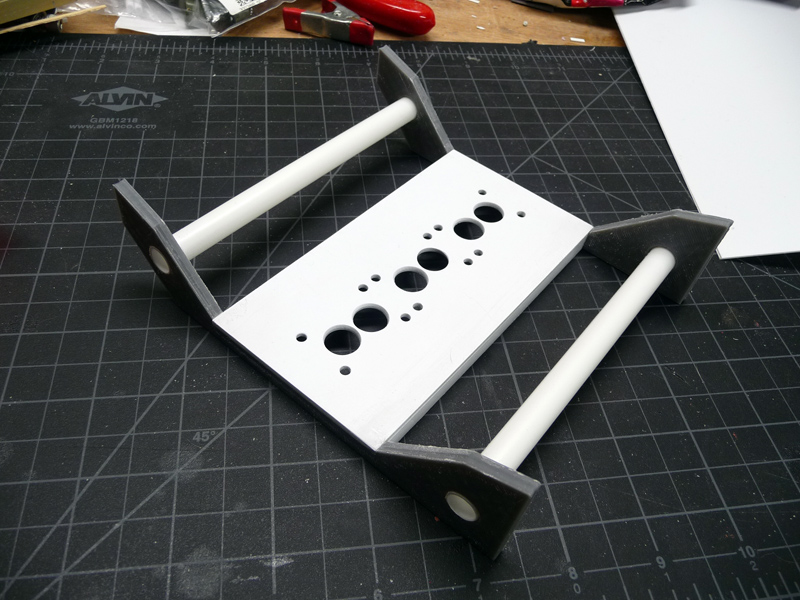 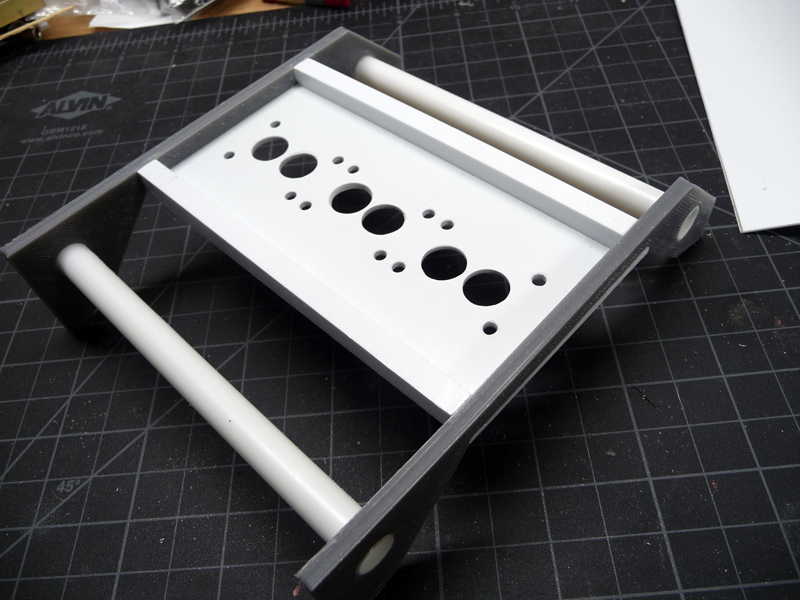 I found a decent picture of the Airlock set that showed some details that are hard to see in the film. I'll try to bring some of these
details into my model, specifically the row of vents above the padding and the 6 cylindrical shapes behind the racks. 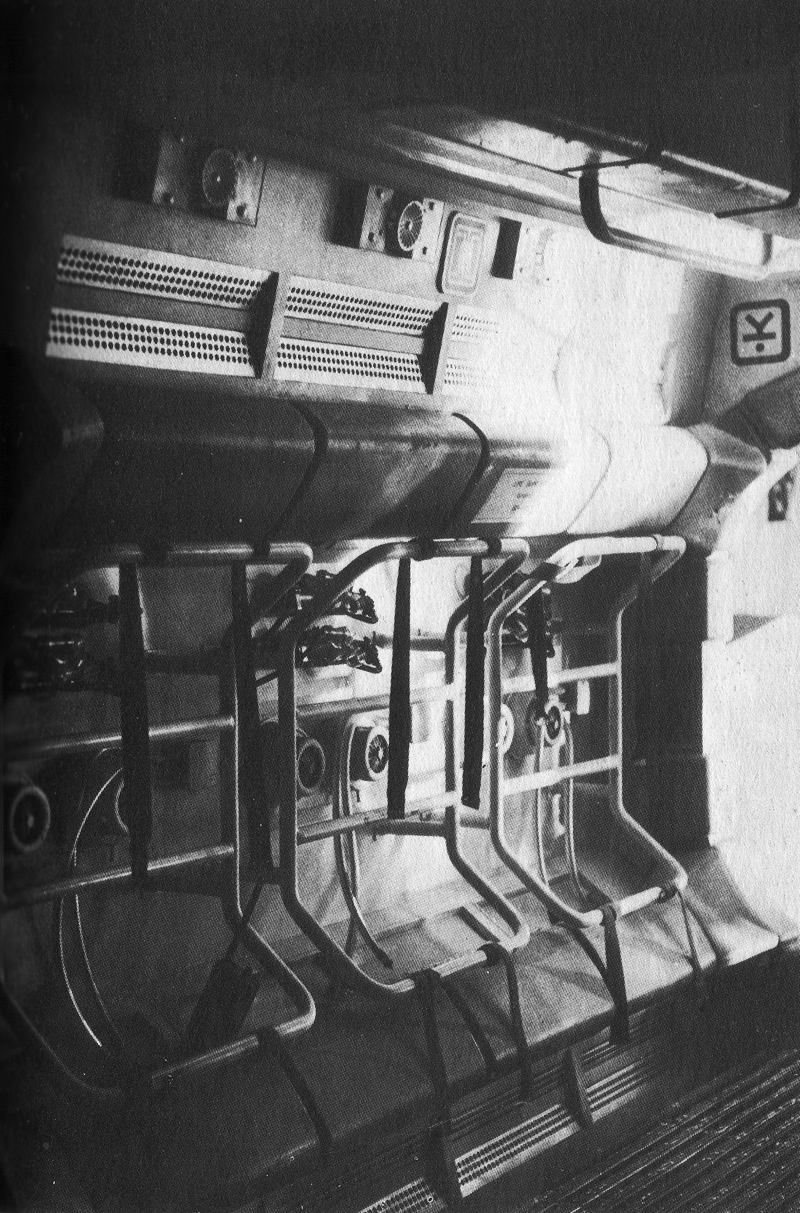 I had some 1:72 wheel hubs from the Zvezda Ballistic Missile Launcher Topol kit on hand that are pretty close (close enough, anyway). 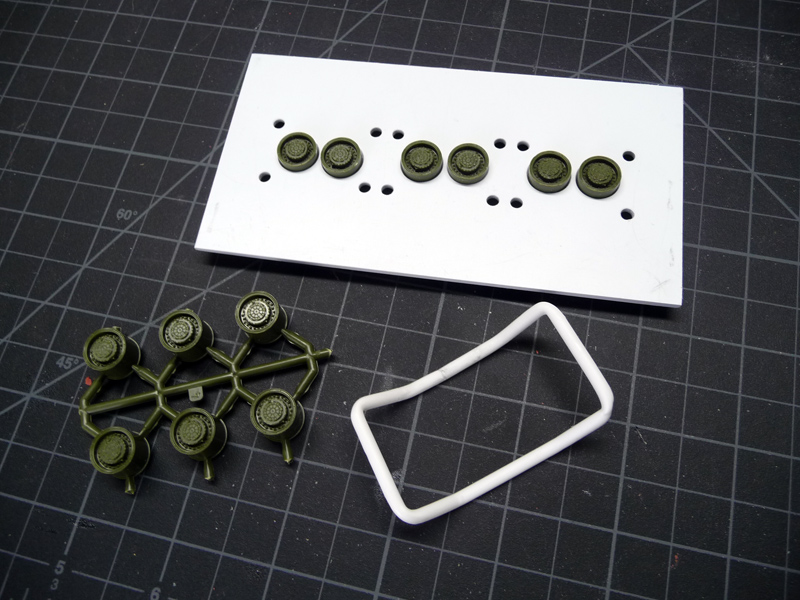 I printed the vent structures and glued in some styrene spacers. I didn't sand these and will let the layer lines provide a bit of 'vent-like' detail.
Hopefully it won't look too crappy. 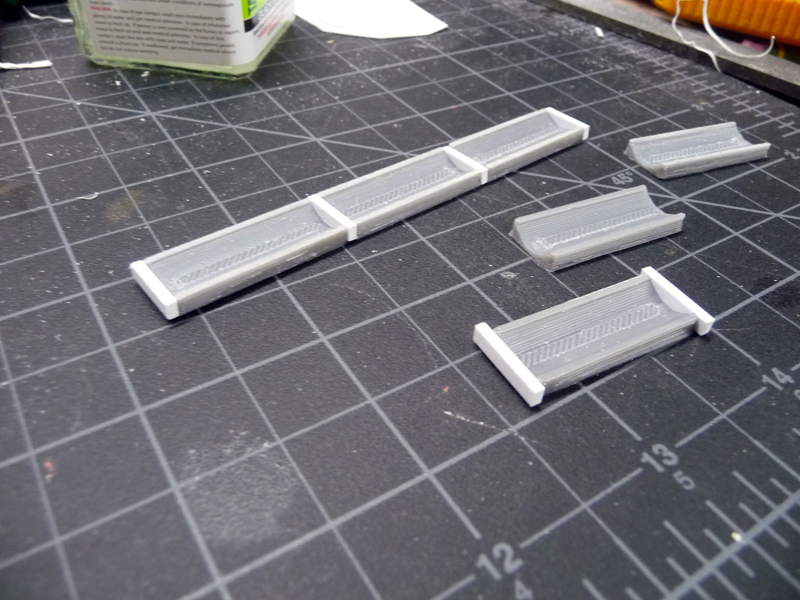 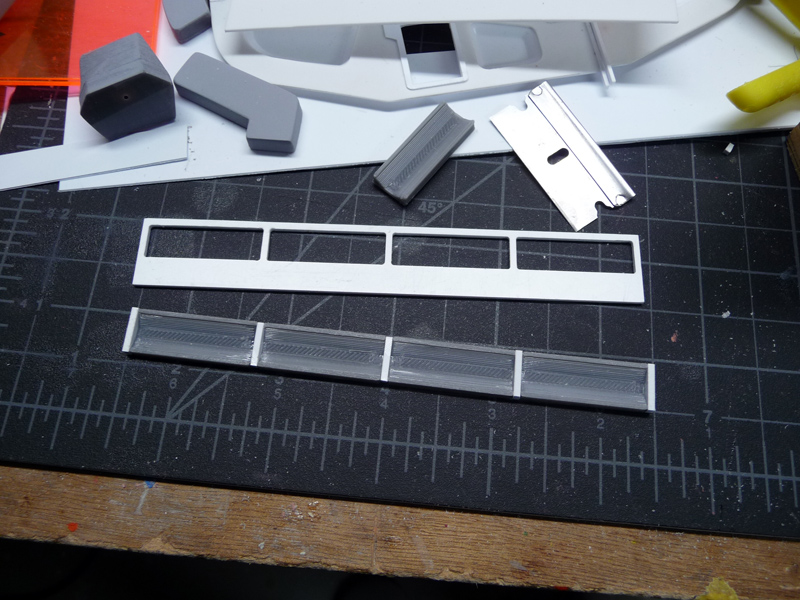 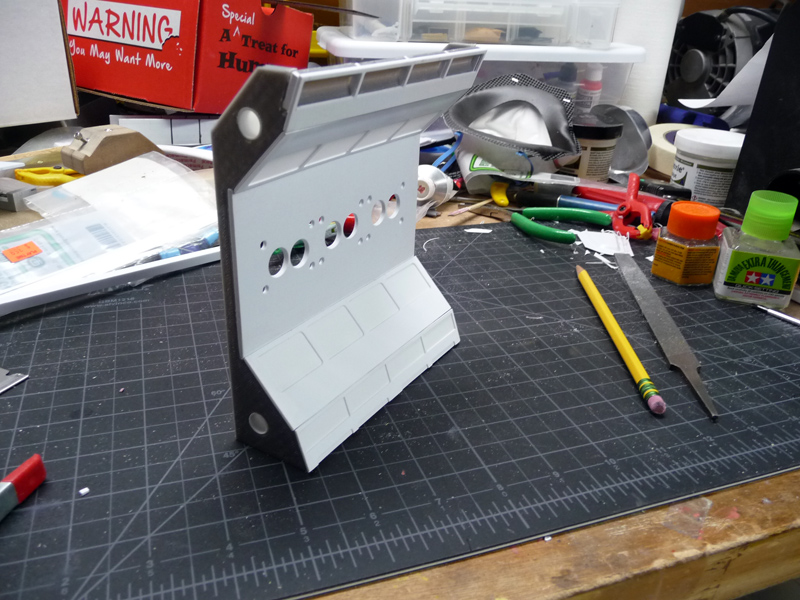 thanks for stopping by.

Stopped in today to do a search for "Nostromo", and this popped up. Nice work!