RPF PREMIUM MEMBER
I know this board has a fair number of MST3K fans.

In case you didn't know, Joel Hodgson has a new Kickstarter to launch another season (and hopefully more) via a MST3K-dedicated streaming platform.

The idea is to use crowdfunding and subscriptions to break away from the "network" model, so the show's existence isn't tied to the whim of an executive or to an algorithm.

If you're a fan, you can chip in here: http://kck.st/3rVpIql

For those who aren't MST3K fans:

Not sure why you are still reading ( ), but even if you are not a fan, odds are good that you've had a show you loved that was cancelled by a network.

Perhaps this project is worth a donation as proof of concept that a show can live on indepently of the "network" model, so the next time a show you love is on the chopping block, the creators/showrunners know that there's an alternative that works?

I kicked in at the $250 level the first day. I'm not the biggest fan of the revival -- I don't feel it captures the "vibe" of the original terribly well -- but the way I look at, they can't get better if they don't make more.

I kicked in at the $250 level the first day. I'm not the biggest fan of the revival -- I don't feel it captures the "vibe" of the original terribly well -- but the way I look at, they can't get better if they don't make more.
Click to expand...

Not that I wasn't expecting to like the revival, but I wound up loving it.

That's not to say I didn't find problems - the Mads segments were a little disjointed sometimes, and the riff pacing was far too rapid - but I really, really enjoyed every single new cast member. And in terms of riff quality, I will hold "Reptilicus" up there with "Mitchell" or "The Final Sacrifice" any day of the week, and twice on Sunday.

And as you said, AnubisGuard, one can only imagine how much better they can get if they don't have a Netflix truncating a season from 18 hours down to 8, like they did in S12.
Last edited: Apr 18, 2021

RPF PREMIUM MEMBER
48 hours to go. They hit the target and most of their stretches. There's one tier left. They're just about at $4.8M, which gets us 9 episodes, and need to get to $5.5M for the full stretch, which is 12. The swag is, IMO, quite worth it.

RPF PREMIUM MEMBER
Update for anyone who cares. Fully funded, with ten hours to go. And Joel also announced a super-secret mystery bonus reward if they manage to top the record amount or number of backers as their previous two Kickstarters, and they're only $120,000 away from hitting that. So we'll be getting a full season of twelve episodes, two shows hosted by Joel, a Rifftrax show from the Gizmoplex filming set they're building, and a bunch of other neat universal rewards for hitting all their challenge goals and amount targets. I have faith they'll hit that last $120K in ten hours.

My MiSTie heart dreams that the super secret reward is Mike coming back, but it's probably an extra episode.

Hey, it's Joel again... but I guess you knew that by now.

I've gotta admit: I knew these last few days were going to get wild, but I didn't know they would get this wild. And since today will be the craziest day of the entire month, who knows where we'll be in another 9 hours, when our campaign to #MakeMoreMST3K finally ends?

But since I know today is going to be pretty busy, I want to share a few really important final updates, so that you know where things stand.

First, if you haven't heard, I have some really good news for you:

This morning at 8:08am EST, we reached our "final" goal of $5.5M, which means that we're officially making a full season of TWELVE NEW EPISODES and – for the first time since you #BroughtBackMST3K – we'll also get to riff TWELVE NEW SHORTS!​

And, for those of you keeping score at home, that also means we've finished all of the remaining "Bonus Challenges" and unlocked even more rewards, including DOUBLE CLASSIC EPISODES for all backers getting the "Classic Episode" rewards, and a FREE RIFFTRAX LIVE EVENT in the Gizmoplex for all Gizmoplex members!

There's a lot that I want to say about this, and how grateful we are, and what this means for Mystery Science Theater , but you know... it's not time for that yet, because our big "FINAL COUNTDOWN" TELETHON doesn't even start until 3pm PT / 6pm ET... and our Kickstarter doesn't end until 8pm PT / 11pm ET! That means we still have 9 hours left to #MakeEvenMoreMST3K, and to see how far we can get.

But if we want to keep things going now, we're going to need some new goals... which is why it's time for me to announce our FINAL BONUS CHALLENGES.

FINAL CHALLENGE #1: If we're able to beat our previous Kickstarter record, and reach either $5.8M or 49,000 backers, our upcoming 3-D episode will also be our first-ever Halloween Special... and we'll give free 3-D glasses to all backers!*​

*If you're not getting other physical rewards, you will need to pay for shipping... but the 3-D glasses will be free, so that you can enjoy our HALLOWEEN SPECIAL in glorious KINGAVISION 3-D!

And if you're getting the T-SHIRT reward, and choose our "3-D MOON" design, your glasses will work with that too. See? They're not just for movies anymore!

Anyway, a Halloween special is one of the most common requests we’ve gotten during this Kickstarter, so it seems like a great way to celebrate breaking our Kickstarter record... and if we get there, we'll even premiere it with a live Halloween event in the Gizmoplex, just for members!

Now, I want to make sure you understand that the Halloween special will be one of the twelve episodes we're now going to make, and not an "extra" episode. That's because funding another episode would cost about $300K... and to keep that much from the Kickstarter, we'd actually have to raise another $470K. Remember, it's like I explained at the bottom of our Kickstarter page: only 65% of what we raise goes into making new episodes: the rest gets spent making your rewards, paying fees, and that sort of thing.

Also, we want to reserve some of the extra funding as a "safety buffer", so that we'll still be able to finish all 12 episodes if one of them runs into issues, or goes over budget. And, I've got some neat new ideas for the live "Gizmoplex events", and I want to set aside a little extra budget for those too. So, I think we'll be able to get a lot of extra value out of those funds.

And then, if we reach that goal, I've still got one more challenge for you.

If you look at the very end of our #BringBackMST3K Telethon, you can see for yourself: 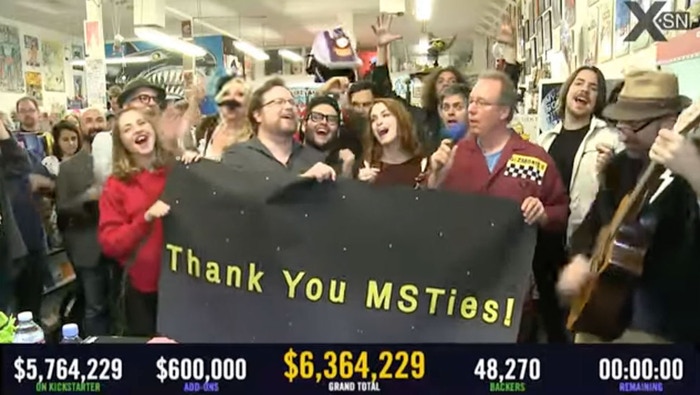 So yeah: if we really want to break our own record, that's the number to beat... which brings me to:

FINAL CHALLENGE #2: If we can break our "total" record and reach $6,364,230, we'll add a THIRTEENTH EPISODE to Season 13 – a NEW HOLIDAY SPECIAL featuring JONAH, EMILY and JOEL – and we'll add an extra month to all Gizmoplex Pass rewards so you can see it!​

Like I said at the end of our last Kickstarter, I've always loved holiday TV, and the tradition of "special episodes" from Bing Crosby, Charlie Brown, and of course, Rankin/Bass. We've already got three of our own holiday episodes – one each for me, Mike, and Jonah – and now, if we're able to meet this final goal, it'll be Emily's turn.

Also, I think a holiday special would be a really nice moment to make sure that all three of our hosts "meet" on screen before the season ends – and it'll be a great episode to watch together at our "GRAND FINALE PREMIERE" screening, if you've gotten tickets for that.

So, there you go. We've got 9 HOURS LEFT to break our own record, make crowdfunding history again , and to go "13 for 13" with a thirteenth episode for our thirteenth season.

Since you've unlocked all of the bonus rewards we offered, the pledge levels are getting pretty plump, and have a lot more in them than when we launched. So, if you haven't already, it's a good time to alert your friends and family that these offer a lot of value.

Also, I just want to tell you now: if we don't meet finish those last two goals, that'll be okay too.

We're already so amazed and grateful for everyone's support and enthusiasm, and that you trust us enough to come along and be part of Mystery Science Theater's next chapter.

Now, we've got to finish preparing for the FINAL COUNTDOWN TELETHON at 3pm PT / 6pm ET – and again, I hope you'll come join us. It's going to be a lot of fun, and a great chance to celebrate together. Also, we've got a bunch of special guests joining us, and a few really crazy last-minute reward offers from some of our friends, including Rick & Morty's Justin Roiland, and the one and only Weird Al Yankovic!

Yeah, the email popped into my inbox about two minutes after I posted that.

RPF PREMIUM MEMBER
I just don't know which "three hosts" Joel means. Him, Jonah, and Emily? Him, Mike, and Jonah? Some other permutation? I'd love a "Four Doctors" sort of episode, but I don't know what everyone's feeling are about everyone else. The tension between Joel and Jim that led to Joel leaving was dividing people into pretty clear camps. I feel like Joel and Mike get along okay, but I don't know for sure. Me, I'd love to see Trace come back in some capacity.

What movies are they doing?

Laspector said:
What movies are they doing?
Click to expand...

Historically, they've never revealed the movie prior to broadcast, first run, but Joel actually revealed the first two movies: 1993's Robot Wars, and 2019's Demon Squad. We also know there's one 3D movie planned (one of the lower pledge levels includes a set of KingaVision™ 3D glasses -- but with practically all of the challenges and goals met or very likely to be met, it looks like there may be a second in the offing, if I read that right, and everyone's now getting a set of glasses).

Incidentally, we've now passed the $5.8M super challenge, and are now reaching for the no-seriously-we-can't-think-of-anything-past-this challenge of $6.4M, which is what they'd need to be able to do a full additional 13th episode (the Holiday Special mentioned in the update I posted above). Considering the Final Countdown telethon doesn't even start for another two and a half hours, and with that offering now laid before us, I have high hopes.

As more is announced, it'll be posted here -- by me if no one else beats me to it. *lol*

It's not a physical set, it'll be a virtual gathering place with separate "theaters" to watch stuff.

Treadwell said:
It's not a physical set, it'll be a virtual gathering place with separate "theaters" to watch stuff.
Click to expand...

I thought the Gizmoplex was the sets, greenscreen stage, and streaming/member-hosting service all together...

***ETA*** Of course I missed where they laid out who the three hosts in the Holiday Special would be -- it was in the BIG HEADER, and I was carefully reading the fine print. -_-
Last edited: May 7, 2021

RPF PREMIUM MEMBER
Welp, they made their super-ultra stretch goal just now with half an hour to go in the telethon.