My thoughts on the Berserker and the "bad bloods" ;)

I like berserker Or else I would not have got the toy but its NO WHERE as good as a classic!!!

I picture this one (Just a random make believe one in a fan fiction like setting) is about the same size as the one from the original that versed dutch,
that one stood 7 '4 it was 3 inches taller then the berserker.

I think the "bad bloods" have no point in the movie in comparison/resembling to the comics.

People seem to think the bad blood was just criminal/pirates/gorillas/etc Yautjas nothing more. NOOO!! They are a WHOLE different species. The a example for relation would be alligators and crocodiles (maybe even closer relation if the two species could breed) similar but different in many ways. Their is some motivated grudge to keep the war going between the two. More then likely at one point these species was together a home planet neighbor planet or in the same galaxy (the similarities is armor,tactics,weaponry they have been together working at some point or copied each other) the "bad bloods" was less equiped seemed like their mask did all the work for them but they was SUPPOSED to be the DVD vs the movie Tape in technology. IF I was to guess I would think these "bad bloods" are the minority of the two sending a message out to the other species. The P1 in the movies was beaten deprived of weapons,starved,de hydrated in whatever fashion. It was a young blood ready for the hunt a teen like Yautja. However if you send a Predator like scar,wolf,the first HUGE P1, or a elder different story.

I hope in the new film (whenever the production will start in the years ahead) that the classic species will make a come back, A good title would be Blood feud or something.

Hollywood does this to good cinemas for example, the classic Tyrannosaurus Rex of Jurassic park was killed by a Spinosaurus (in jp3), the Spinosaurus was 43 foot and it killed a juvenile 37 foot t-rex, However in the first film the T-rex was 46 feet! See the similarities??? Hollywood has something great and poops on it.

To the defense the new chapter brought new fans and a boost in the series and the movie was exceptionally great! However I personally would have liked to have seen a classic kill another classic, It would show problems in their alliance and give a good story to a new movie.
Regardless the Movie was well and brought a good kick in income and fans in the series. Long live the Yautja series!!!!
Travis


Noland: Anyway, there's two different types of them out there. Hmm? Now, they're similar, but they're different. It's kind of like the difference between dogs and wolves. The one's that are running things up there, the larger ones, hunt the smaller ones. It's some kind of blood feud, I guess. Been going on for a long time.
Royce: They do this just for sport?
Noland: Oh, yeah, they bring in fresh meat season after season. I mean, **** you wouldn't believe. Bring it in, hunt it and kill it. In that order.


Quoted from the movie from http://www.imdb.com/title/tt1424381/quotes 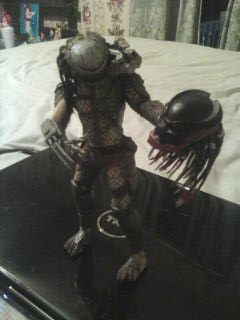 Well, a lot of the stuff we see in the AVP movies are all ripped off from the comics, the whole AVP concept was almost entirely comic books until the new movies came out. The only 'hint' we got in movies prior to the less than stellar AVP/Predators presentations was the scene near Predator 2, showcasing a Xenomorph skull as a trophy. Now, with all that said, the original bad bloods, if I remember correctly were the same exact species, they weren't retarded or deformed looking like the creatures featured in Predators.

That's just my opinion on them, anyway let me wrap this up before I get banned. If you don't like the latter movies, I would just disregard them, that's what I do, if it makes you feel better, Predators isn't even technically canon, since it's just a re-make. ...and also, some things work well in comics, that just don't work in live action movies, I think that applies largely to the latter movies as well.

I believe I heard somewhere that the Berzerker, Tracker, and Falconer Predators were "subspecies". They were still "Predators", just deranged in a sense. But, since it says blood feud, they very well could be bad bloods. Do I believe "bad bloods" all look like that--no. A bad blood could very well mean a Predator that doesn't adhere to a clans tradition, honor, rules, etc...It could very well just be a "Good Pred vs. Bad Pred" too. There's many angles at which this could be played. As for me, I really like the concept of a "bad blood". The suit I'm working on is a "bad blood".

As for the movie, I really liked it. I don't believe it was meant to be a 1:1 exact remake of the first one. They did incorporate a lot of items from the first one, which to me was better then seeing Hollywood do their own thing like in AVP. As for AVP, yes the comic concept came out but the movie was inevitable. I'm also glad that it wasn't a try to make the same exact thing as in the comics too. The movie gave us a small look at the Predator history and I thought the overall concept was perfect, but the execution was a miss. They could have did more with it. I mean "the enemy of my enemy is my friend"?

I like the comparison of alligators to crocodiles. This actually makes me feel a little better about the horrid look of the new predators. I still say the worst looking without a bio was scar... terrible.


So happen to find this link out a few moments ago frankly quite mad about it.

Don't make another post saying I am a "douche" I am behind my back.

Real Hunter like attitude with all your Profanity (extreme sarcasm intended)

Obviously I am not the lazy one.

Thanks for not contacting me about your post (extreme sarcasm intended again) I know it was towards me.

Also if you go by assumption the movie clearly gives us the assumption that they are a different species. Noland quote "they are similar but different like dogs and wolfs"

Please don't make remarks if you have a opinion or something urgent to tell me make a Pm. Name calling is uncalled for.

Keith I was slagging off the mask design not Ian Whyte. Ian was great in his performance

predator666thepain666 said:
Keith I was slagging off the mask design not Ian Whyte. Ian was great in his performance
Click to expand...

I understand, no one here thinks Ian did a bad job, I just felt bad that he had to wear such a POS mask. No his performance was nothing short of amazing & was the only thing keeping me watching the movie.

EDIT: 12/23/2010: Upon Kit's post, I have decided I will probably delete this or edit it. Calling the mask a POS, especially when I haven't even touched a lump of clay in years, was callous on my part. To any reading who created the mask, I apologize.
You must log in or register to reply here.
Share:
Facebook Twitter Reddit Pinterest Tumblr WhatsApp Email Link
Top