So i decided to do a Predator hound suit. I was looking at a thread creating by another member and took a look at a picture posted by Xdmray. I haven't heard of anyone using it during a convention so I thought I would try to make one. The biggest question on my mind is....


If I build one, will someone walk me?

ha, when my Noland suit is done, i don't know about walking but i can shoot you.

looking forward to this, should be an interesting build.

xdmray said:
ha, when my Noland suit is done, i don't know about walking but i can shoot you.
Click to expand...

Hahaha. Ok. That is something i am definitely gonna consider is the ability to see. Whether I am dodging people and walking or running away from your barriage of fire.

Still would be nice to have a guide to even follow. I am envisioning myself being a fairly low obstruction. The collection toy with the pictures I attached has the tracker holding the hound by chains mounted to the shoulders. I took a few of the pictures that other members were great enough to post on the reference area. thanks guys it saved me a lot of time and gave me some ideas to start off with.

After looking at all of them, They are all different. Obviously from the concept to the movie is very different.
In the concept art the hound is more dog-like in build and the upper seems to have bird-like features. The top of the muzzle is hard and almost looked like bone or cartilage. In the movie, the front of the head was more rounded

The movie seemed to have more of a demonic feel to it. The head was short by wide. The teeth were wide and the mouth was hinge like similar to most large catlike species. Lions, saber tooth tigers etc. The hound also has a predominant upper bite. when the teeth were shut. though most of the teeth are the same length the frontal seem to show more.

The sideshow collectible model of the movie predator hound shows similarities to the design in the movie and not so much the original concept. I went back and watched the movie again after taking a look at this model sculpture. The model shape appears to be dog like, but the skin frog like. It's top lip recedes back showing the bums. The skin and head shape is true

Can anyone share any thoughts on which ones they prefer or have a meaner look to them? Or if there was any lore base around this before the movie came out? Or was it something they added in that wasn't in the original comic? 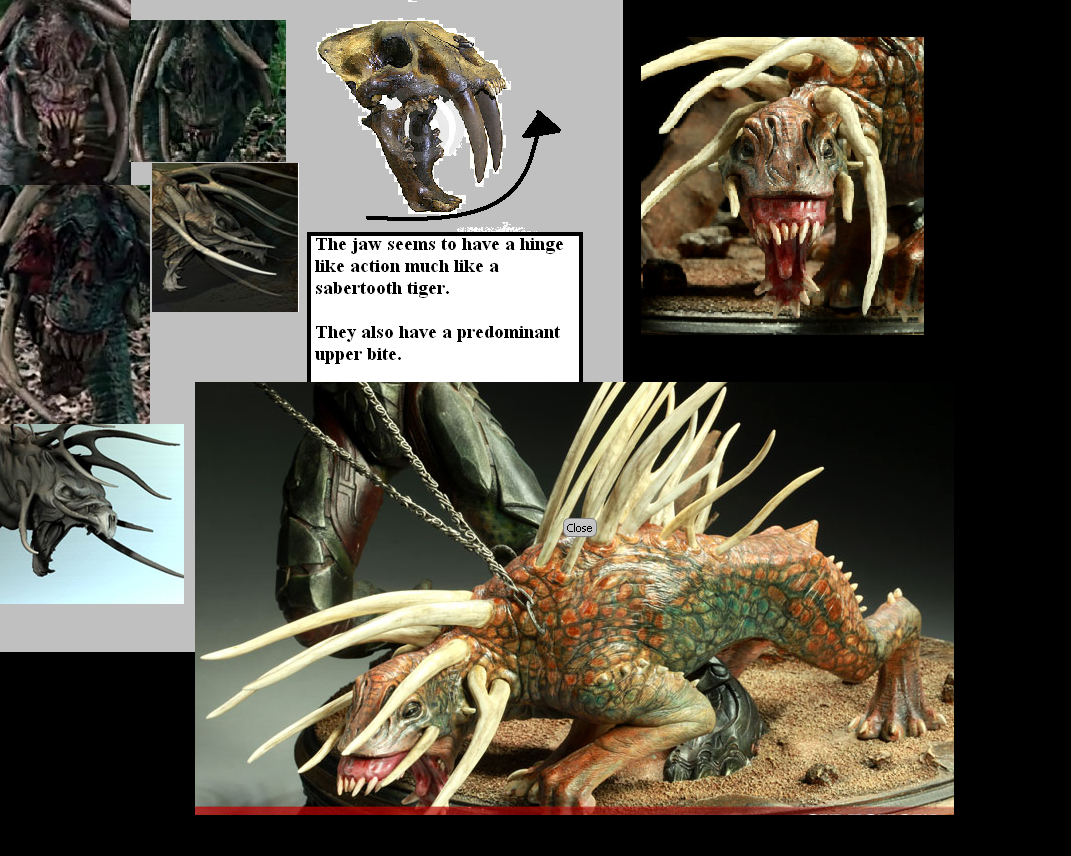 I love this idea! Id agree to walk you but i dont have a suit. itd be kinda weird to have neyteri, if i choose to do that, walking a predator hound.

I dont know any backstory but onanother site i read that the hounds were like kurn from AVP extinction. i havent played the game so i dont know the similarities. maybe thats a place you can look to get more ideas about your suit though.

do u have a big dog?like a german sheppard,rotty?that would b the way to go,permitting u have a cooperative dog!lol...then its in scale to your pred suit!bit of a far cry but that would be freaking over the top!just expose the dog to parts of his costume over a period of time so he gets used to it!....hmmmm...is this border line animal cruelty?i think it would b worth it!haha

Predagirl said:
I love this idea! Id agree to walk you but i dont have a suit.
Click to expand...

Thats very sweet of you thanks. I will also do some research on your recommendation of their background.

biofreak said:
do u have a big dog?
Click to expand...

I never thought about it as an actual costume for a pet to wear. That would be a pretty cool idea, I dont know if my dog would go for it though. I think he may were the costume, but he would probably attack the tusks near the face and body. :S

I have an australian shepherd btw. He is a 1 yr old puppy but he is beefy. he's maybe 60lb catfish.

That whole walking on all fours (Even with front arm "leg" extensions) would just be killer on my back. Best of luck to you, though! I thought about something like this for my pomeranian, but, alas, he would DEFINITELY eat the damn thing, LOL (Not to mention the size differential)...

Darth Pinhead said:
That whole walking on all fours (Even with front arm "leg" extensions) would just be killer on my back. Best of luck to you, though! I thought about something like this for my pomeranian, but, alas, he would DEFINITELY eat the damn thing, LOL (Not to mention the size differential)...
Click to expand...

I did consider getting arm stilts, but at the most I only want to add about 2~4 inches to the height of my front. may consider a weight lifting brace to take some strain off my back and also use that to mount the back tusks onto. I did draw some concept sketches for the teeth. This will be my first biggest project. I figure the head of this thing has to look mean and vicious or this suit wont really be successful. will upload the sketches of the teeth and how I am thinking the jaw may work when i get home. 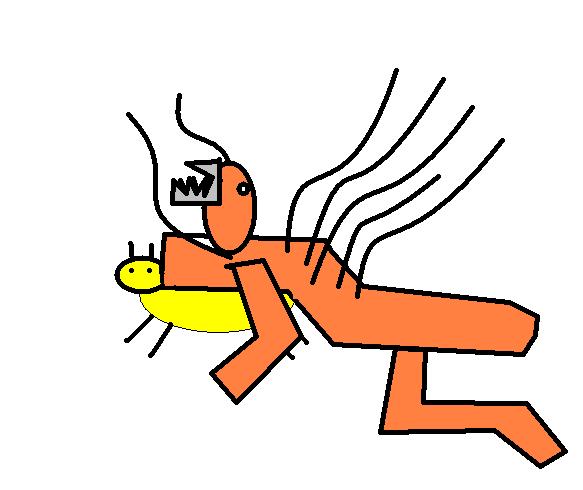 i can just picture it now,your dog running in circles attacking itself! lol...not much of a hell hound!!!!
S

I remember asking about four-legged suits sometime in august or something and I remember xdmray giving me some great advice on it too. I've decided to put mine on hold for now while I work on my femme pred but if it ever gets done, It'd be cool if there were a pack of hounds. I'm real excited to see how yours turns out. Keep at it.

this is an extremely rough sketch. lol

if you have seen some of my terrible comics then you already know what to expect. but I am gonna carve this out and do a mold starting with plaster. Making a head that looks vicious will determine whether this suit will be good or not.

i already know my biggest challenge will be the feet but I the head will be the first part of this beast. This is what everyone will be looking at first. The jaw will consist of two parts: the upper and the lower jaw. I am planning on doing a hinge like the saber tooth tiger. The picture shows both of them together, however the picture shows them both together. This is what I want them to look like together. I am not sure on the mounting system, just yet. I am planning on having something that looks level mainly when I am on all fours, but being able to go from two's to fours and being able to still see the head would be very nice.

The tools I am using for this project are wood carving tools. Flat edges and curved edges. Using bass wood and carving foam. I will also be using an exacto knife and sharp short knive. Most of this you can get at a Hobby/ Art supply store. I went to Dick Blick's. So far I have invested $18.42. 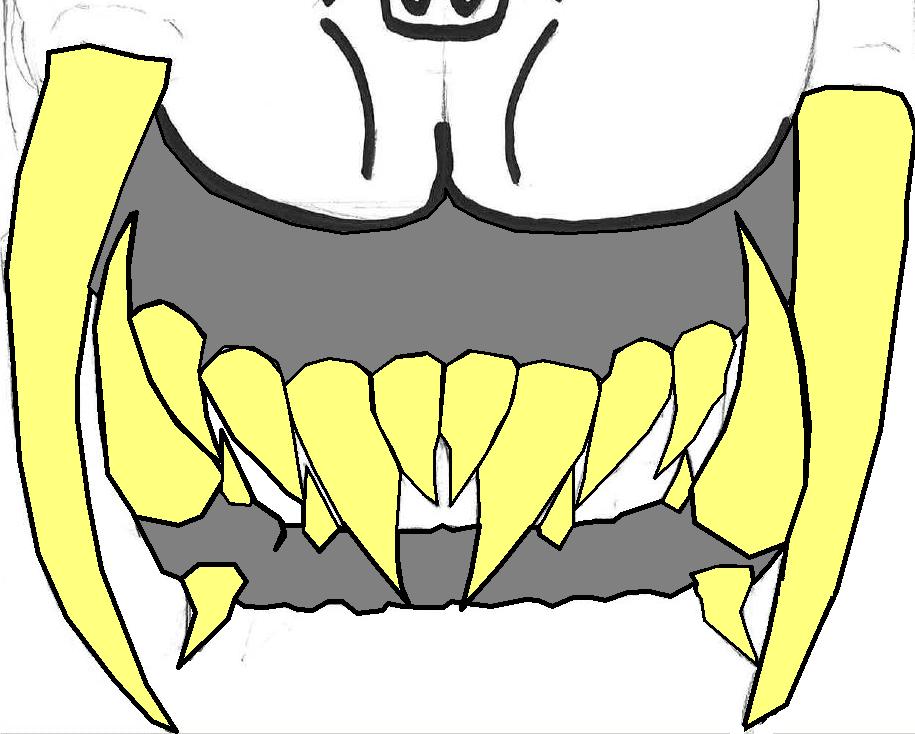 upper teeth carving. I still need to do some refining to this, but this is for the upper jaw. The teeth could stand to be a little sharper but wanted to put something up to show a little progress.

the lower jaw will be a separate piece that will be connected by a hinge so it can open and close. I will make a temporary mold of this when its done so I can still keep the original for reference. 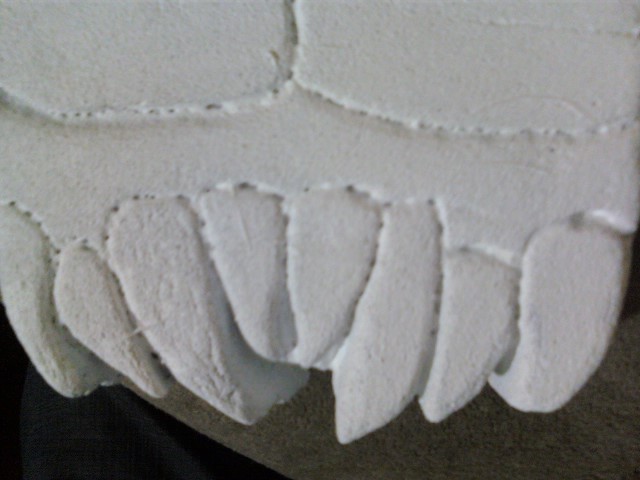 these are the same teeth but I did a little more detail. I added more dimensions to the teeth and another set in the back. This will fill in some of the gaps and make it look more 3D. I will take another picture but I am waiting for the paint carving to dry.

What I have been doing in between carvings is painting the sculpt. I can use the white paint to see what I have done in the previous work and then I can see the areas that I have just cut away. I would recommend white if you use this technique since you can see where the shadows are cast. Normally you wouldnt use this in carving since you like to keep the wood bare. I am gonna make a mold of these to work with for the final project so how my model looks doesnt matter really.

This picture was taken with the teeth upside down laying on the table. Again this is the upper half of the jaw. I will start the lower half within the next few days.

I also wanted to add: If you do attempt to carve anything please be very careful. Your tools should always be sharp. And since they are sharp you can and most likely will cut yourself. 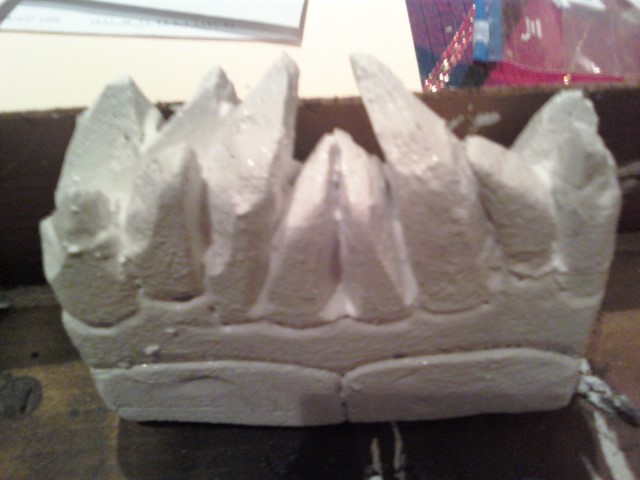