My Own Maltese Falcon

Let me preface by saying that I'm a lazy bum, so I didn't sculpt this dingus from scratch. Much respect to MK, Oz, and Mr. Savage. I took this as a sculptural restoration project to bring out what was lost in those wacky plaster birds that are floating around. You're no doubt familiar with the object in question and its flaws.

I did a clay pour of the plaster bird in Monster Clay (which really excels at pours), then proceeded to match it up to the screenshots from the movie.

I shaved and smoothed the feathers, fixed the scoring on the wing feathers, which had been over exaggerated, and reshaped much of the head. This shot is mid-progress.

Eventually I molded it, and cast it in Smooth On's Onyx resin (the fast setting version). But the big problem I had is that you could no longer see the detail, so it didn't look like the Falcon in the movie.

But I had another idea.

The original lead Maltese Falcon went up for auction about 20 years ago. The first thing that struck me about the promotional images (after the color) is that you can tell it's the bird seen in this shot in the movie because the eyebrow is dented in the same way. I assumed that somehow the gold color had been exposed over the years since shooting. But, as I looked closer at the tonal variations in the screenshot, I saw that the lighter areas corresponded to the gold areas on the auction bird, specifically around the neck. I became reasonably confident that this gold/brown coloration was more or less how the bird appeared on set.

It makes sense, too. Even though the script specifies a "black bird," the art department wouldn't make a jet black prop. It wouldn't show up well on camera. Funny, because it's the same problem I had with my black bird.


So I cast another copy. This time, I wanted to do a bronze bird. I can't tell what material the lead bird is covered with, but bronze seemed like a nice approximation, based on the other images from the auction.

I went with a cold cast bronze process, rather than paint, because I wanted an extra element of authenticity. I polished it and did a black/brown acrylic rub out. I may have been a bit heavy handed with the paint, but it's easy to remove later because it's just sitting on top of the metal.

Not perfect, but it's mine.

Lots more pictures and explanation on my blog, if you're interested: http://chickenhaunt.blogspot.com/2016/07/the-stuff-that-dreams-are-made-of.html

A couple lessons learned that folks may find useful:

The Smooth Cast Onyx Fast is really hot and really fast. It says it has the same work time as 65D, but it doesn't. I was working in batches about 4 fl oz, and this stuff was steaming in the mold.

I'm aware of two methods of cold casting. First is to mix metal powder into the first layer of resin, then buff away the some of the resin to expose the metal particles. The second is to dust the surface of the mold with metal powder, and back it with resin. You can also do both in the same casting. I tested both methods with the Smooth Cast Onyx and felt I got the most out of the second. You get a thicker layer of pure metal, rather than flakes mixed in the resin. Plus, when you mix the powder in this resin, it gets too thick to slush. I'm pretty sure the bronze sped up the cure of the onyx when mixed in, too

RPF PREMIUM MEMBER
Great work! I like that you went with alternate coloring, it was done for Superman, so why not the Black Bird, too!?

Thanks Indy! Exactly. And if I'm dead wrong, well, at least it looks cool, haha.

RPF PREMIUM MEMBER
Great project! I like your final finish - it has a nice "handled" appearance to it.
C

This is fantastic, especially the bronzing color. Now one of the projects I might add to my list.

When you said you "did a clay pour of the bird with monster clay" are you referring to the method of liquifing the monster clay and then letting it set back up to sculpt? Thanks

Customrelic said:
When you said you "did a clay pour of the bird with monster clay" are you referring to the method of liquefying the monster clay and then letting it set back up to sculpt? Thanks
Click to expand...

A clay pour is melting the clay and pouring or brushing it into a negative mold (usually silicone) to get a copy in clay that you can work with, once it's hardened back up.

Thats what i figured. That was a great idea. Your doing a great job with it. Love the cold cast

This is absolutely stunning, and I love the finish of your Falcon!

Thought I would just bump this thread again.

This falcon is without doubt the most accurate replica out there!

I made another one of these recently that I thought turned out nice. Same cold cast bronze as before, but it photographed as a different hue this time. 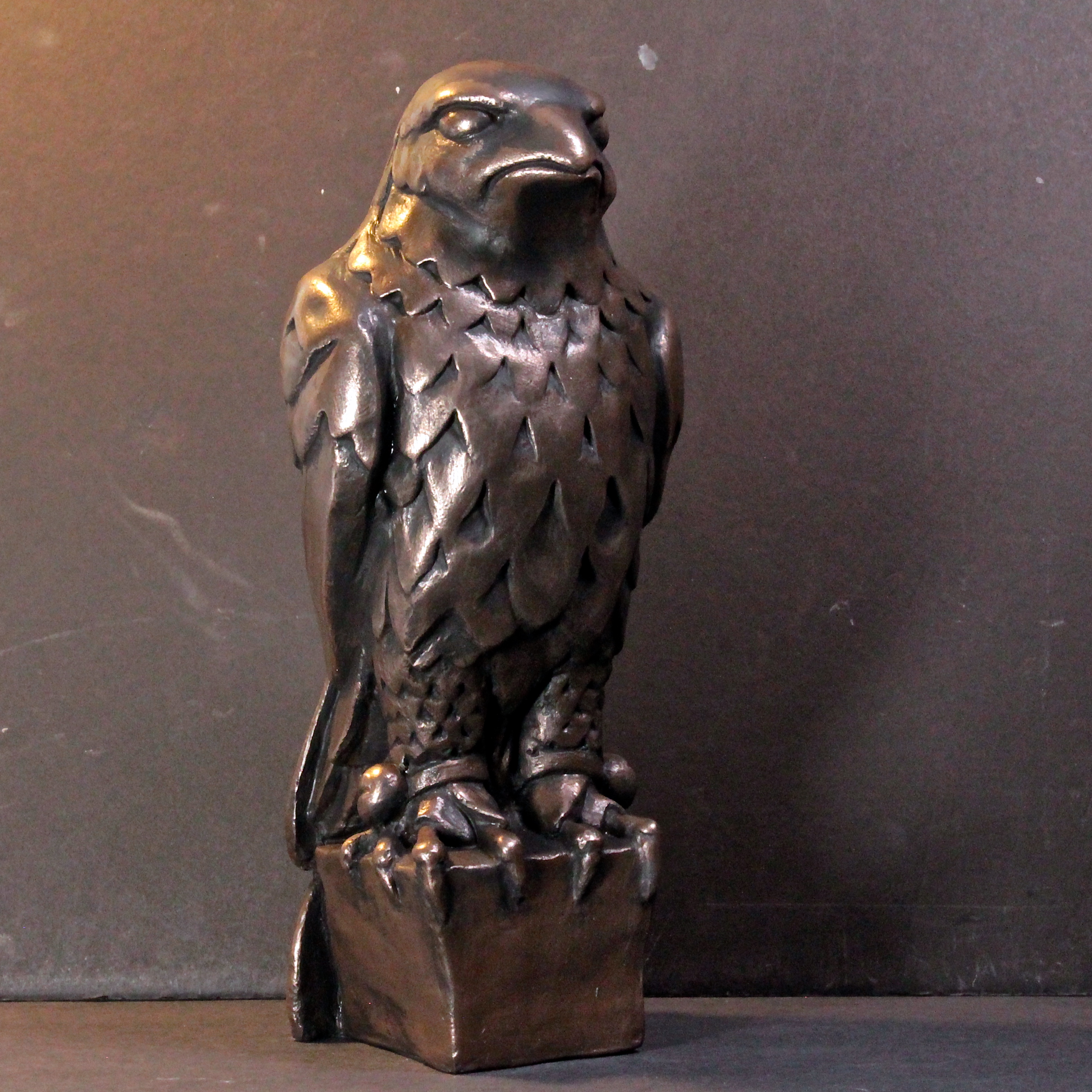 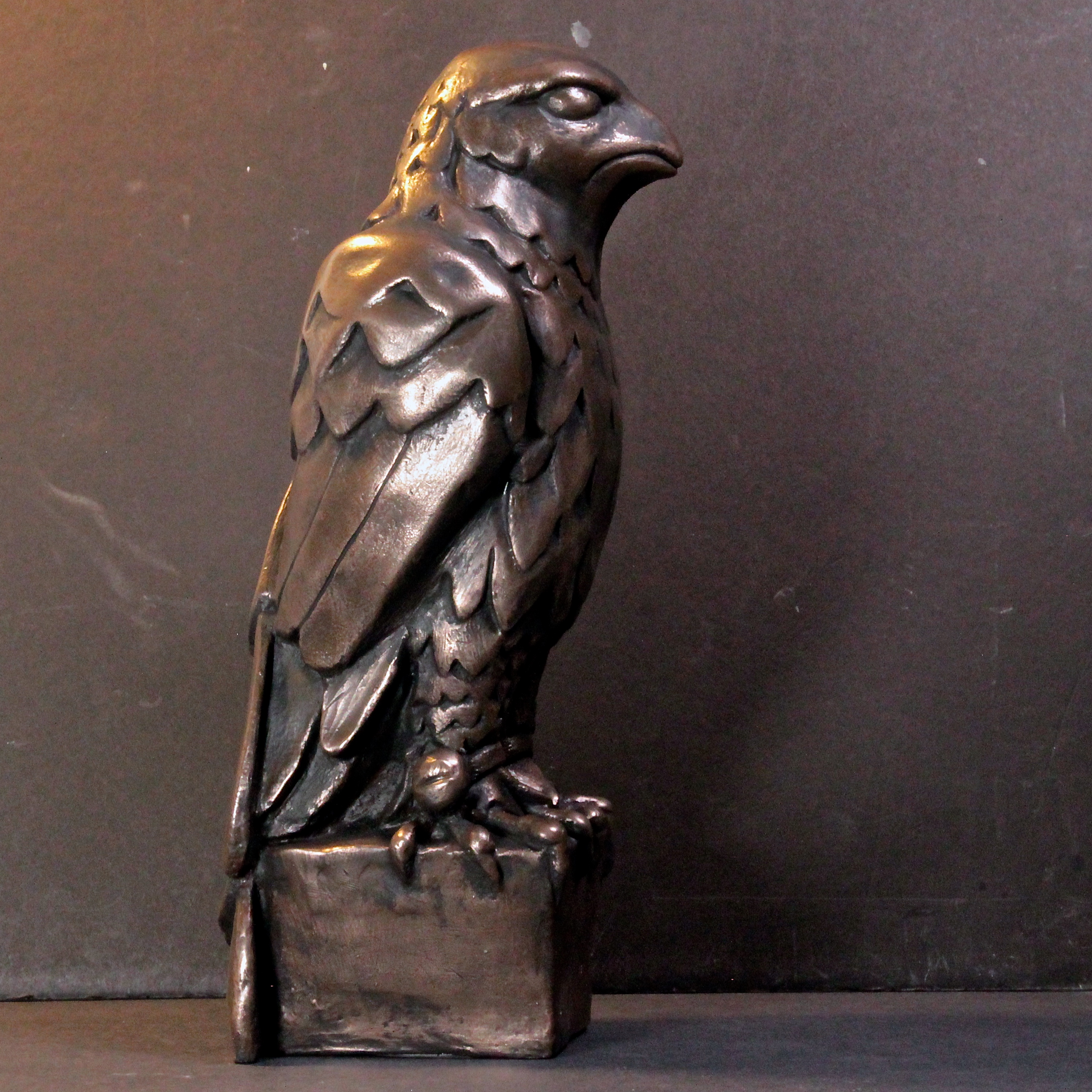 There must by now be someone with an accurate 3D printable version of this! These look amazing. Anybody know where I could get a printable file?
T

There must by now be someone with an accurate 3D printable version of this! These look amazing. Anybody know where I could get a printable file?

No need for an accurate 3D printable version.

This is the most accurate replica of the Maltese Falcon that has been made to date.