I've been a huge Blade Runner fan ever since I watched the first run of the film at the base theater when I was in the Air Force. I have for many years wanted a durable, well-made firing replica of the Blade Runner blaster. I have a Sidkits all metal build I did several years ago. it's beautiful to look at but I've never been completely happy with it because it is stupidly heavy and also very fragile. Not a great combo for a prop you want to carry around and play with or do cosplay. (Gee we never said cosplay when I was making costumes in the late seventies...)​

Anyway I recently decided to build my own Airsoft version. As far as I can tell nobody makes an Airsoft Charter Arms Bulldog .44 magnum like the original prop was based on on so I found a moderately close substitute and purchased a wingun 701s full metal Co2 powered revolver from Evike. this gun is very well made, accurate, and Shoots at around 400 fps.

I also ordered an offworld M2019 Blade Runner blaster which I am using parts from to modify the wingun 701s.

I removed the barrel from the 701s and built a new barrel from scratch using aluminum tubing. I replaced the aluminum inner barrel with a stainless steel one and added a better quality spring inside the barrel. I think the new barrel is a pretty good match for the BR blaster and it shoots quite nicely.

Here's what I started with: 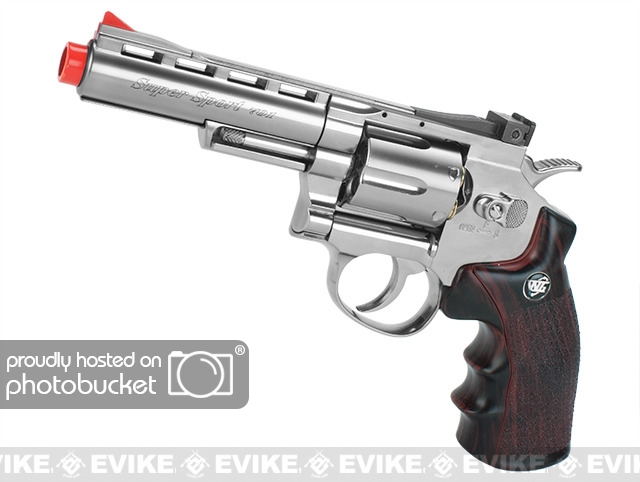 Here's my wingun 701s with my custom made barrel installed, the sights removed, and the extractor rod shortened: 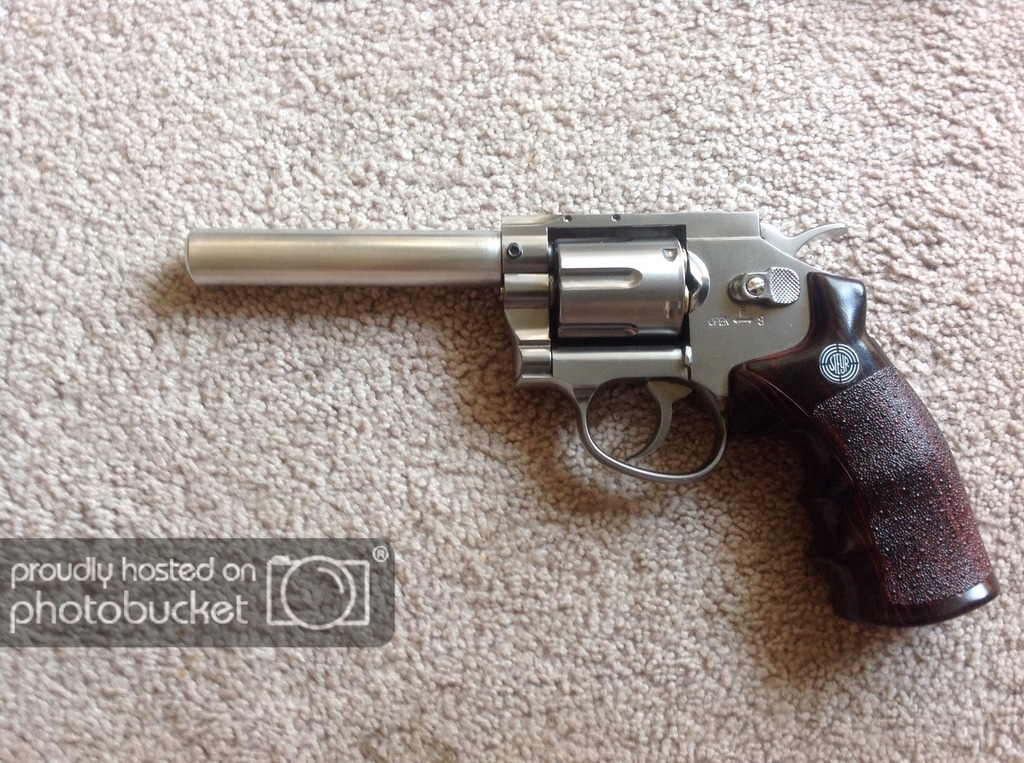 The M2019 blaster arrived today and I immediately began stripping off the black anodizing on the upper receiver. I spent the rest of the evening fitting parts to the Airsoft gun, drilling and tapping holes, and doing minor machining on the gun frame in various places as needed to get the parts to fit.

Here's what I got done today: 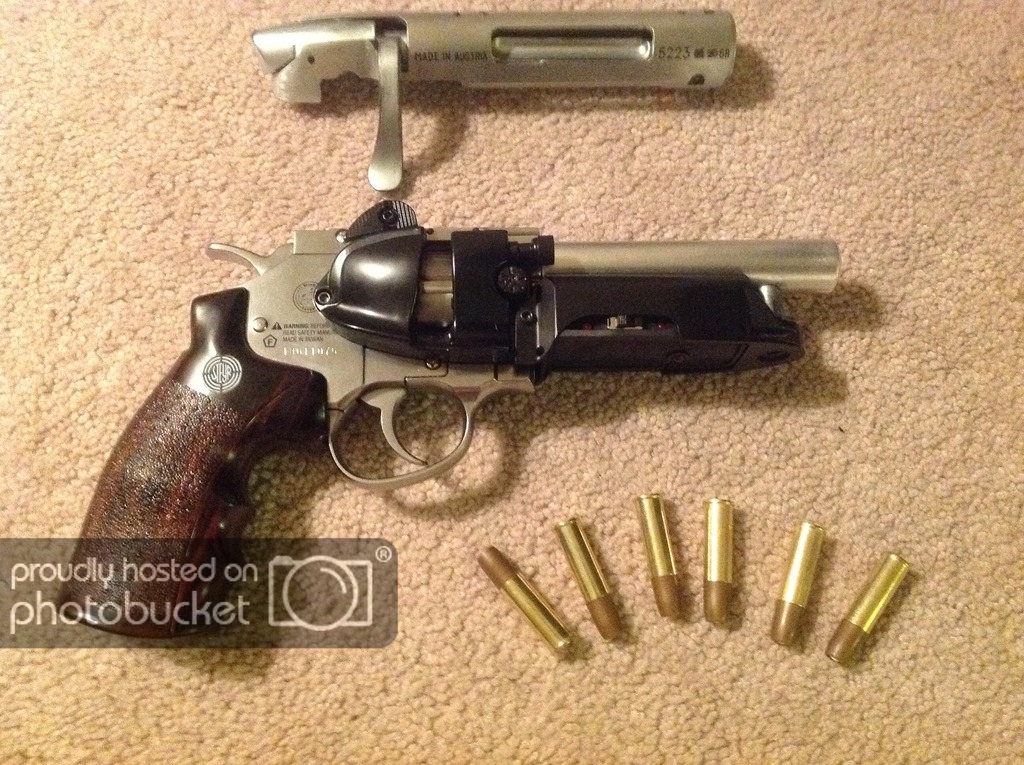 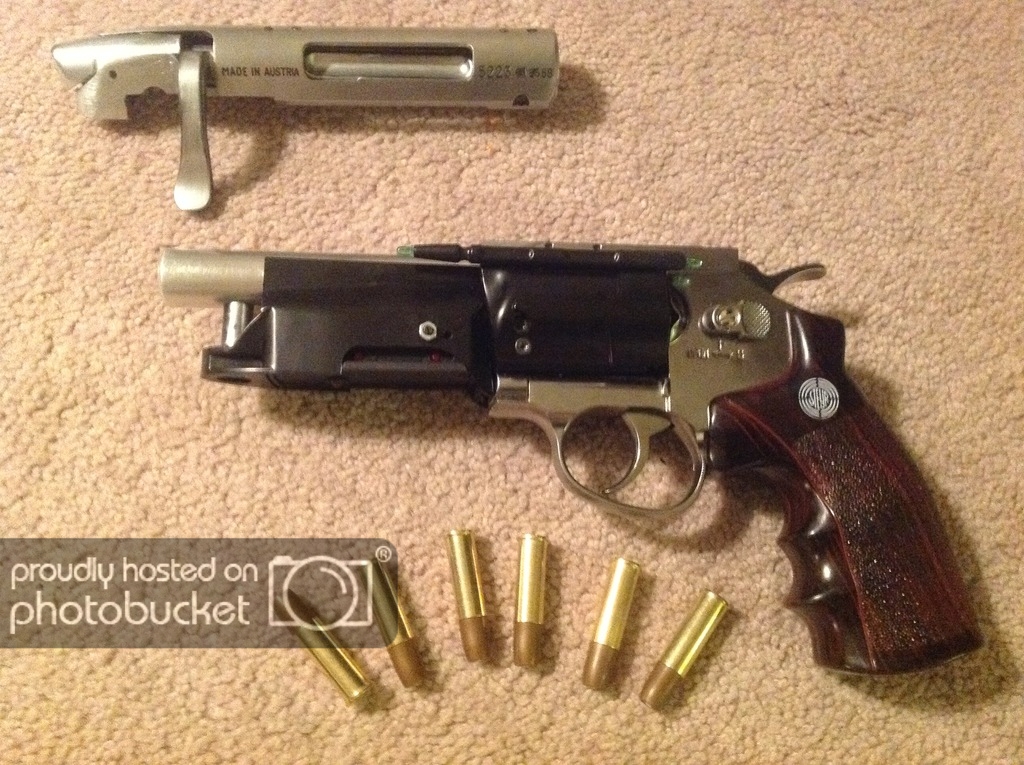 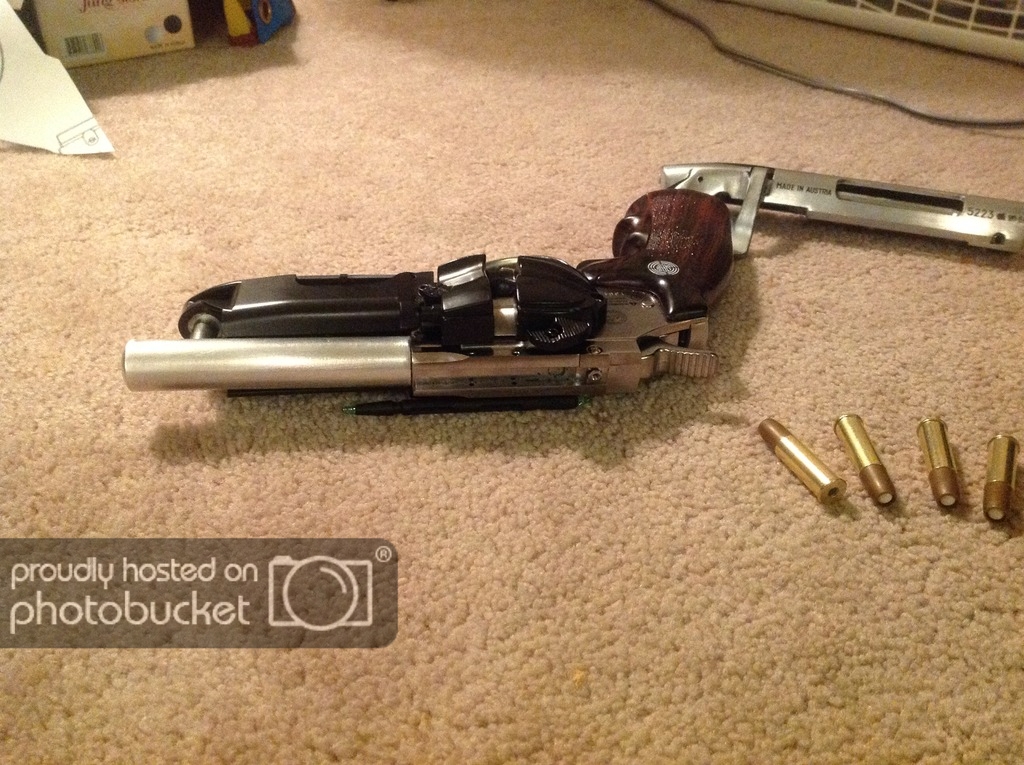 Removed original trigger guard and mounted the new one. Trimmed down the hammer. Completed about half the work reshaping the top of the frame to allow mounting of the upper receiver. 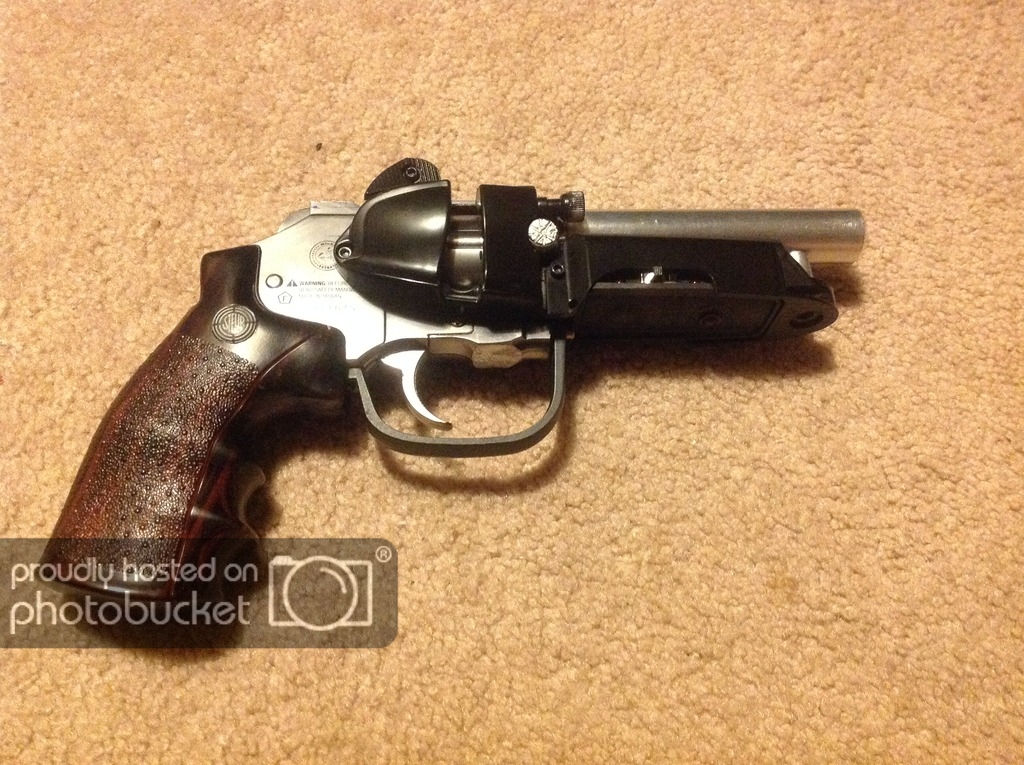 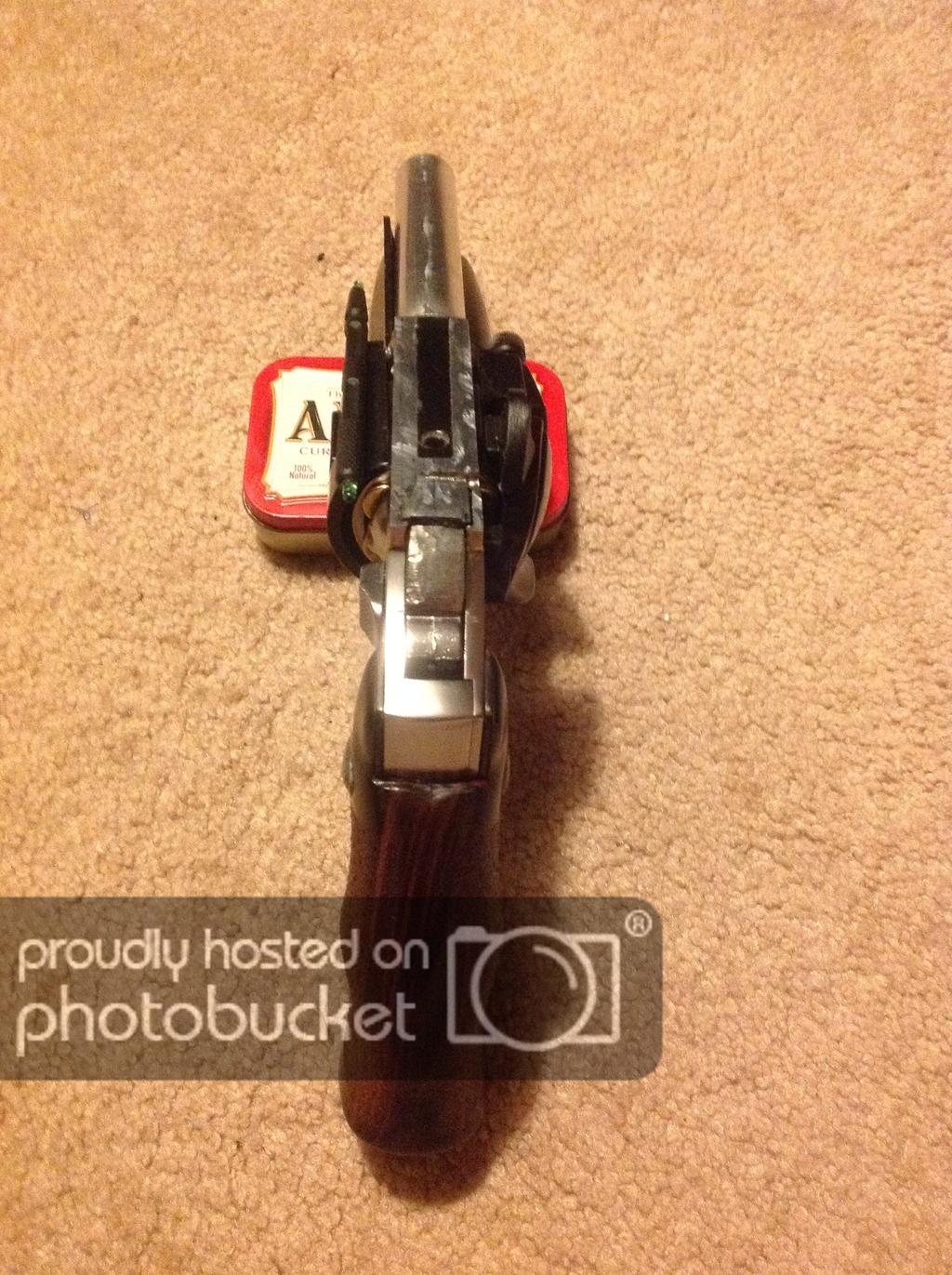 Machining the slot for the forward trigger... 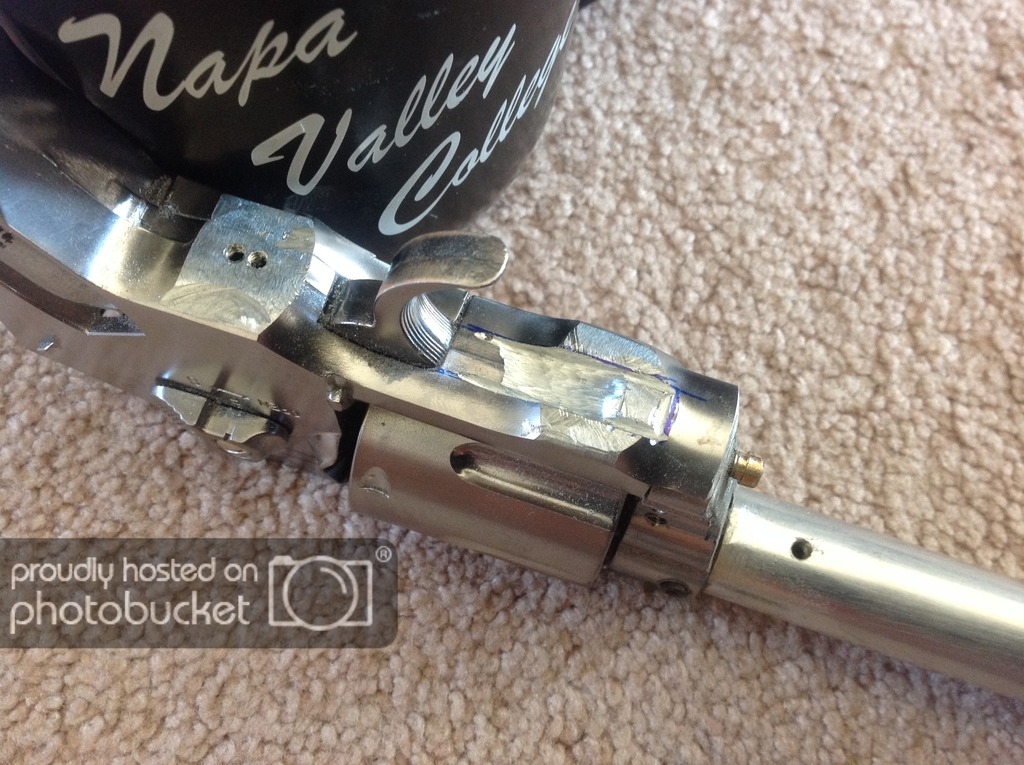 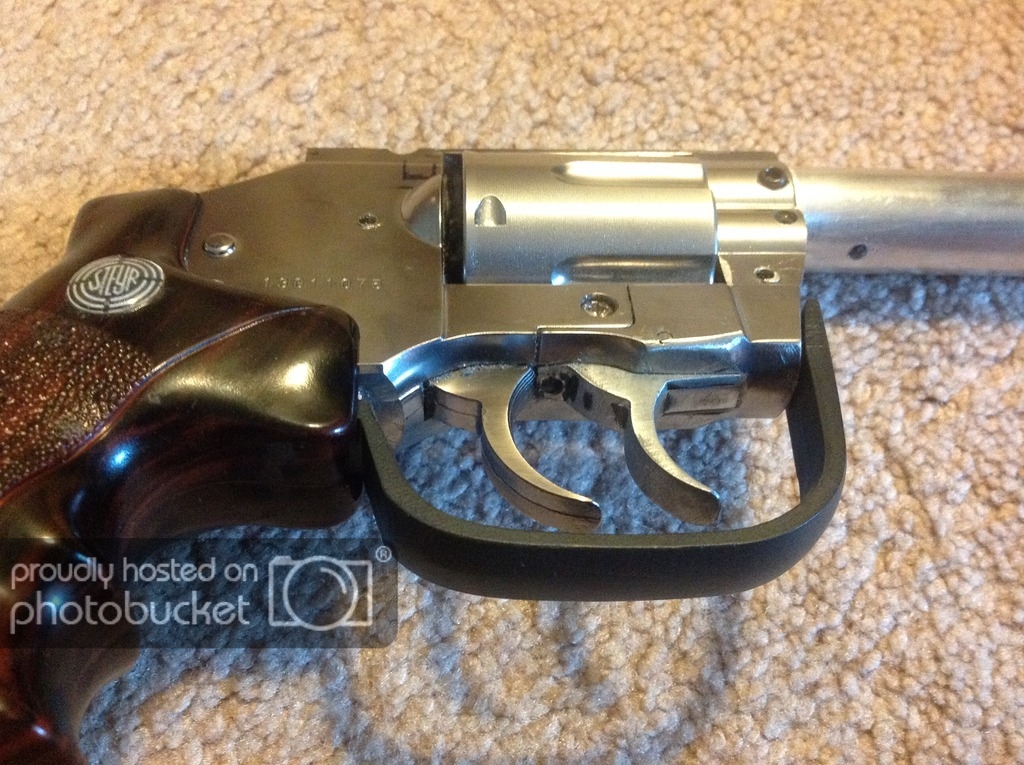 I'm going for a "well maintained service pistol" look so I won't be doing any weathering. I will also be keeping the faux wood grips on it since A. I like them, and B. I can't modify the the grip frame to use the film style grips without damaging the Co2 cartridge mount. 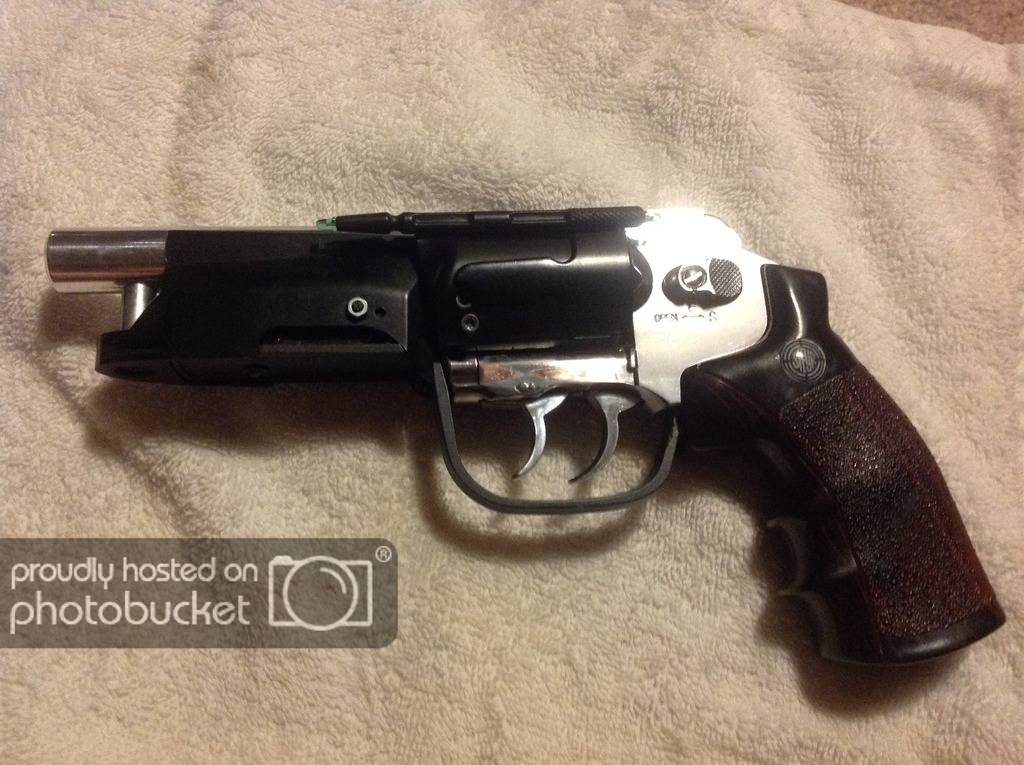 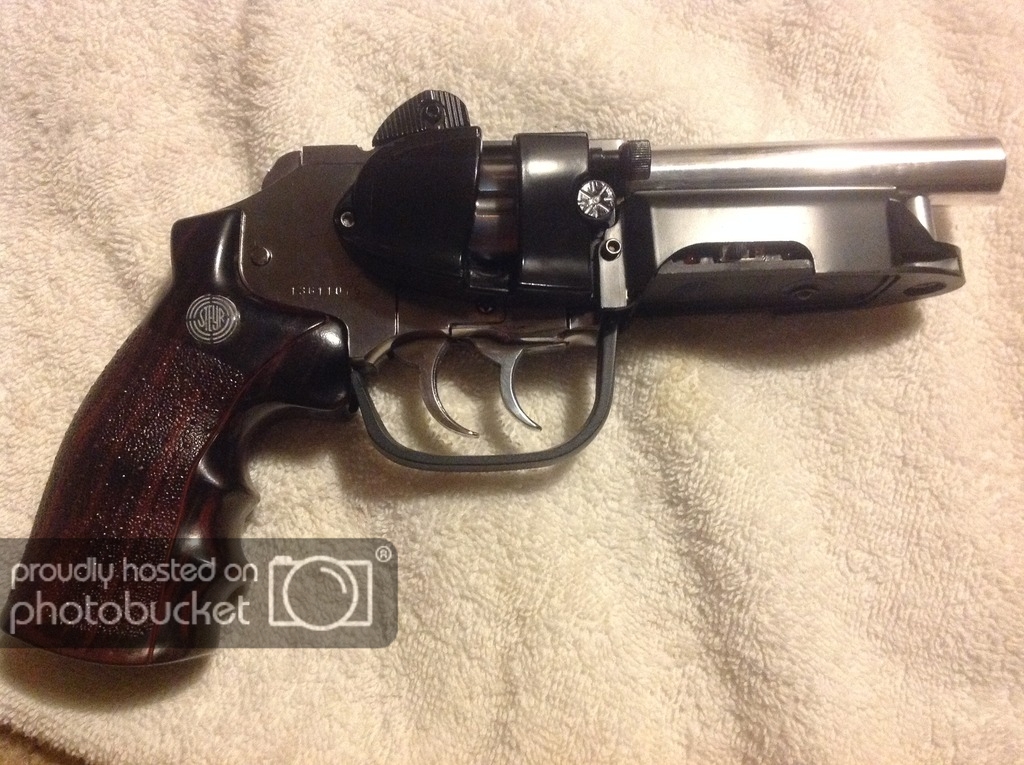 Next up is finishing the machine work on the top of the frame and getting the upper receiver mounted.

I too have built one of these out of an airsoft gun and and tomenosuke kit and it can be a bit of a pain.

The real problem as you mentioned is no one currently makes a Charter Arms Bulldog model.

I managed years ago to find a rare and elusive Kanomaru Bulldog airsoft pistol but those are over 30 years old and rarer then hens teeth to find and I was sweating then entire time I did the modifications to it :lol

I look forward to seeing you progress I love these airsoft conversions.

I finished the machining to fit the upper receiver to the frame. There is still some clean up work to do at the rear end of the upper receiver and on and around the hammer. It's slightly different from the original due to to differences in the airsoft gun but I'm pretty darned pleased with the way this is turning out. 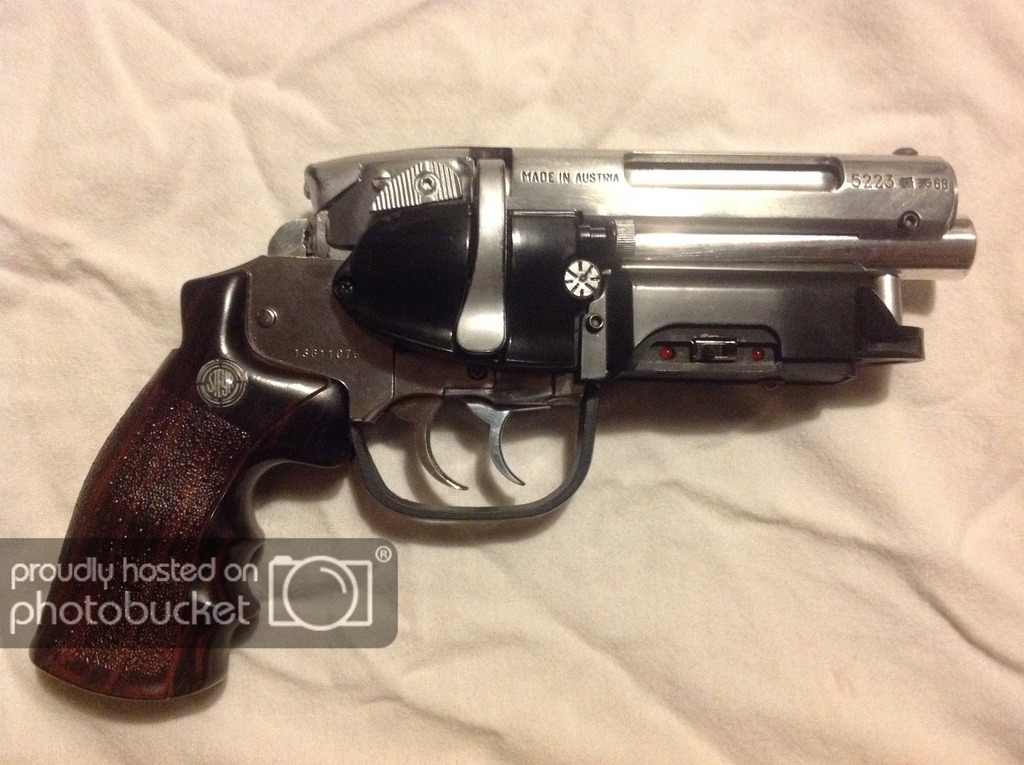 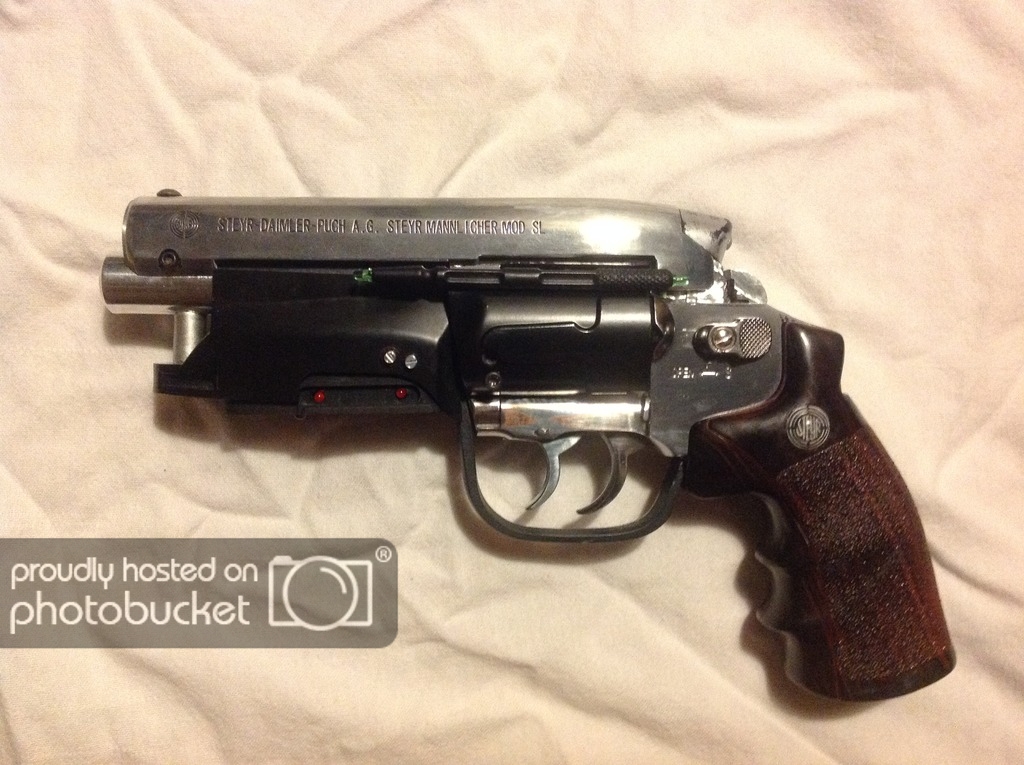 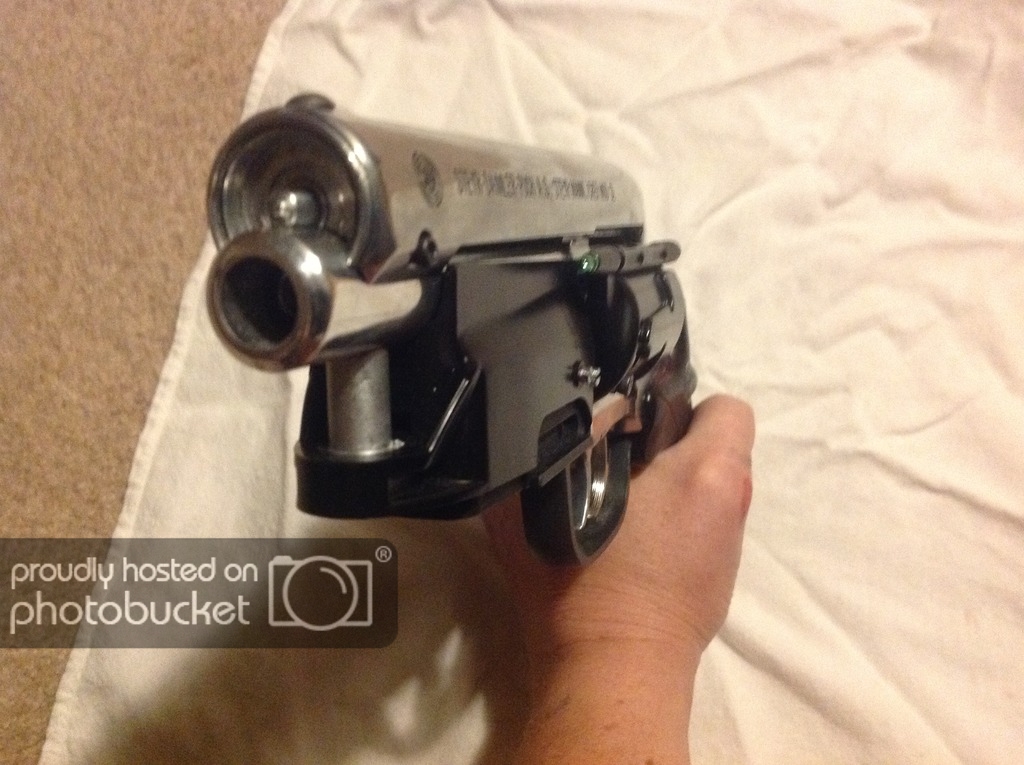 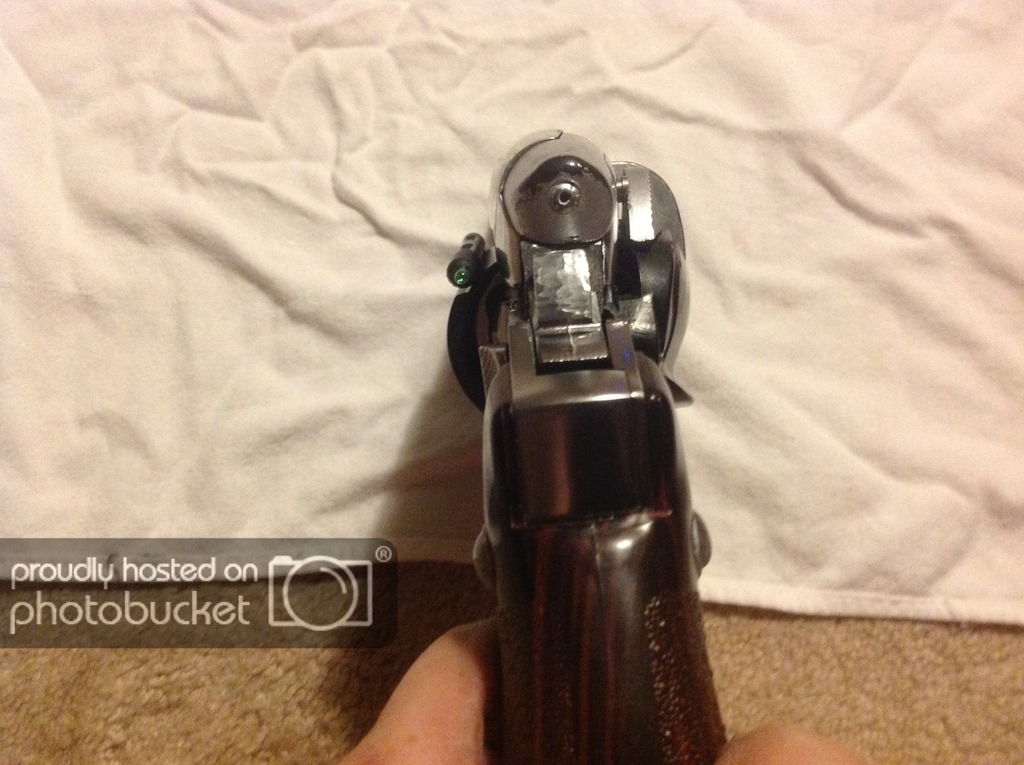 Gwen,
That looks awesome...to say the least! Very imaginative to create your own version of the blaster. It turned out great and would be a welcome addition to anyone's collection. Kudos for your imagination and execution!!
--Ed

Yeah Gwen, that is a righteous build. Very nice work. I like the way you made your own variant. I dig that stuff. It looks fantastic.

Thanks for the kind words guys! It's not quite finished yet but I'm pretty proud of this build =)

My new holster from Phil Steinschneider just arrived today so I thought I'd post some photos. This holster is beautiful, I highly recommend Phil. I also included my ID I made with my plastic card printer...

Added an aluminum shroud behind the hammer to try to preserve the overall outline of the original prop and to clean up the frame areas I had to cut off. I still need to file it down a bit and polish it but this is the last of the work I expect to be doing on this project.

Today at 3:24 AM
Alan Castillo