RPF PREMIUM MEMBER
Welp. I was going to follow up updating the first post immediately with this one, but the power went out as I was typing it up. Yay. Anyway. Fresh start. Kinda. More of a soft reboot, I guess. I currently have three HBS Shadow Trooper helmets and one standard white Stormtrooper that I got for a commission that canceled due to life tossing them a curve ball. I'll start there. By this point, I can break these things down faster than someone disjointing a chicken for cooking. I keep these pieces: 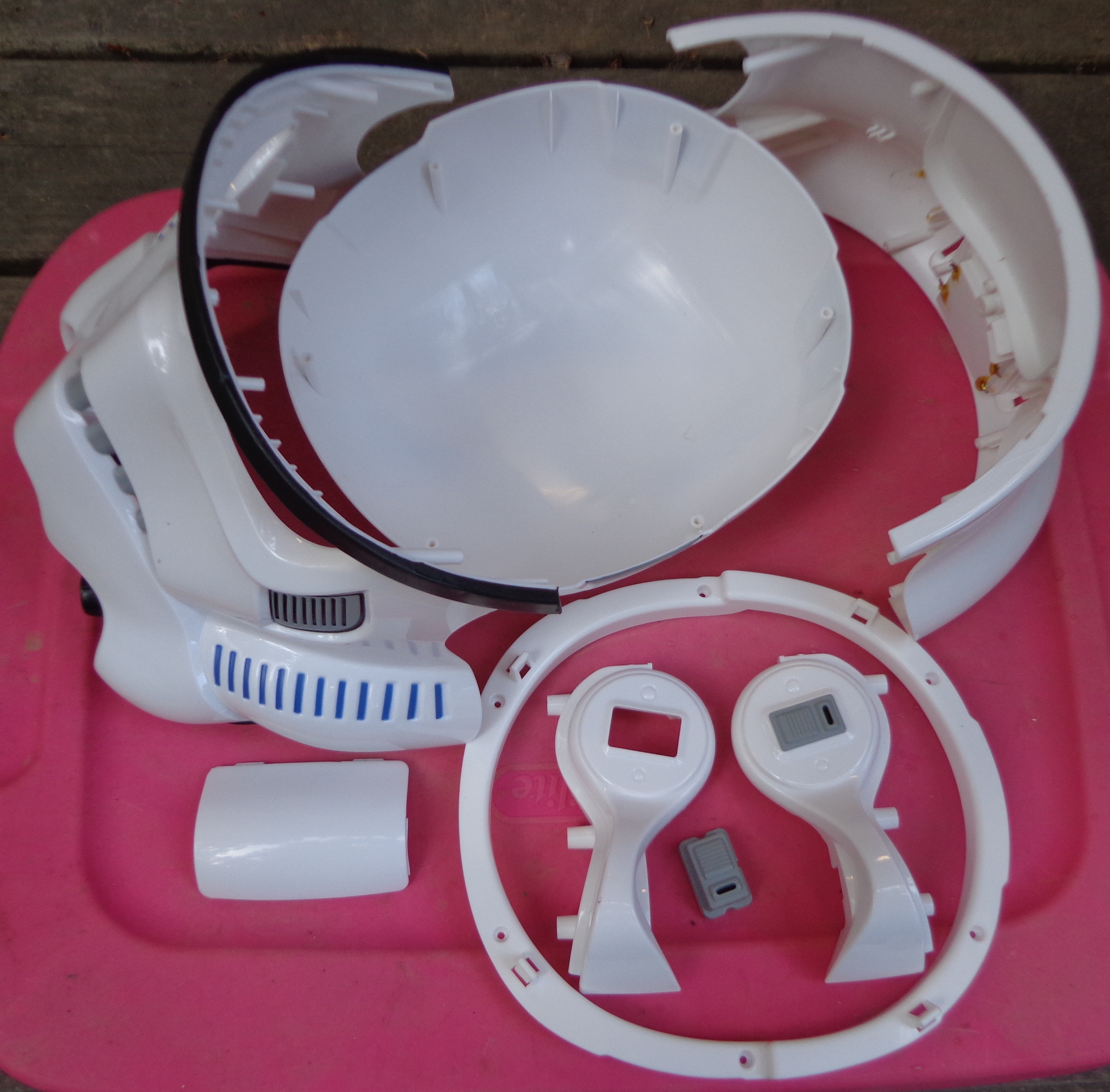 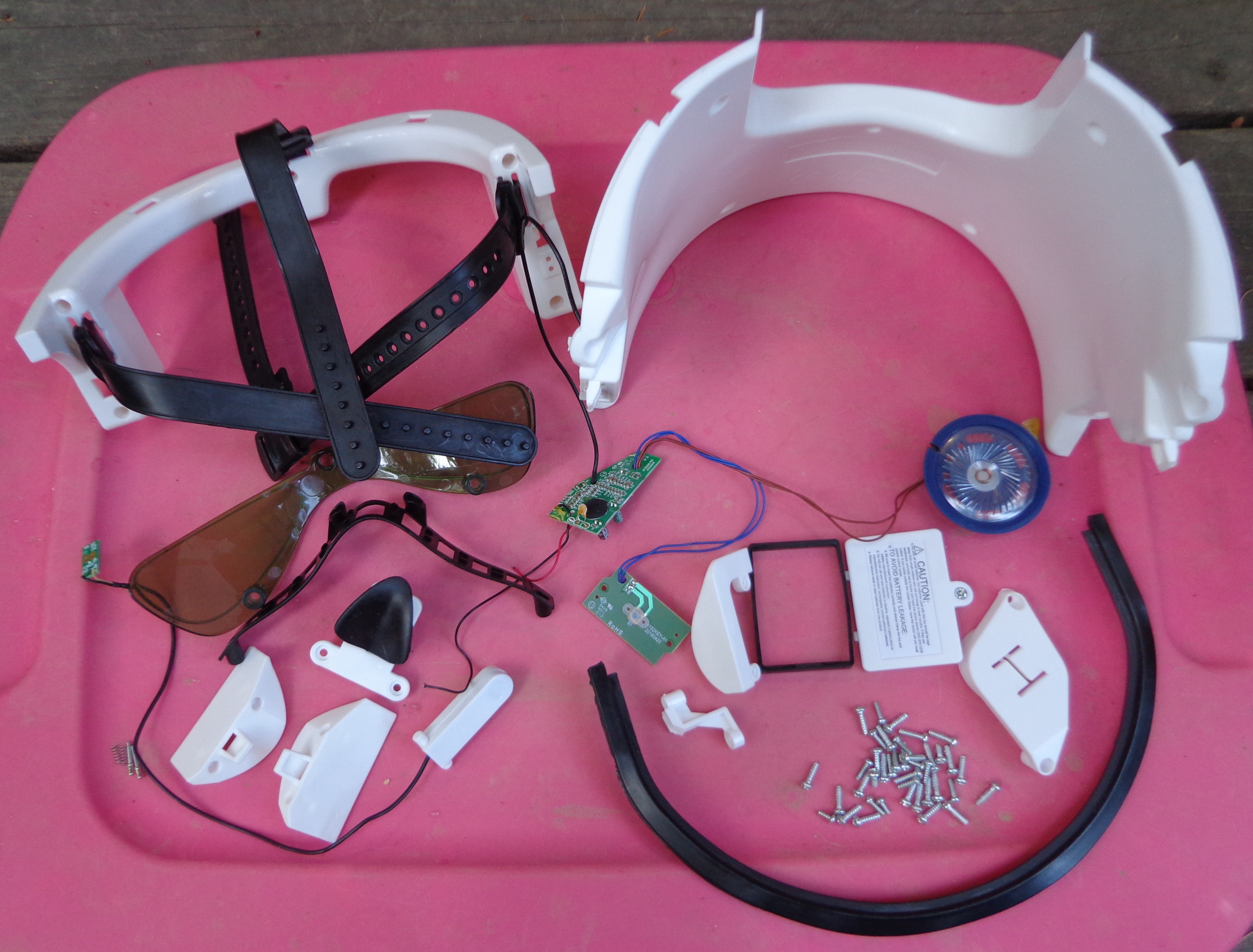 Although I should note the Shadow Trooper variant has a semimirrored tinting film in front of the lens piece that I keep. Also, I keep the separate earcap greeblie out of habit more than need. I only need one pair of those, for one of the builds I'll get into later. The rest are getting replaced by more OT-style bits. I also pop the aerators off and keep them in my just-in-case drawer. As shown upthread, I have accurate 3D-printed Hovi replicas that, conveniently, don't require drilling out.

I've got a pretty set prep routine now for the individual parts. Pretty much everything gets ground out of the insides, with a few exceptions: 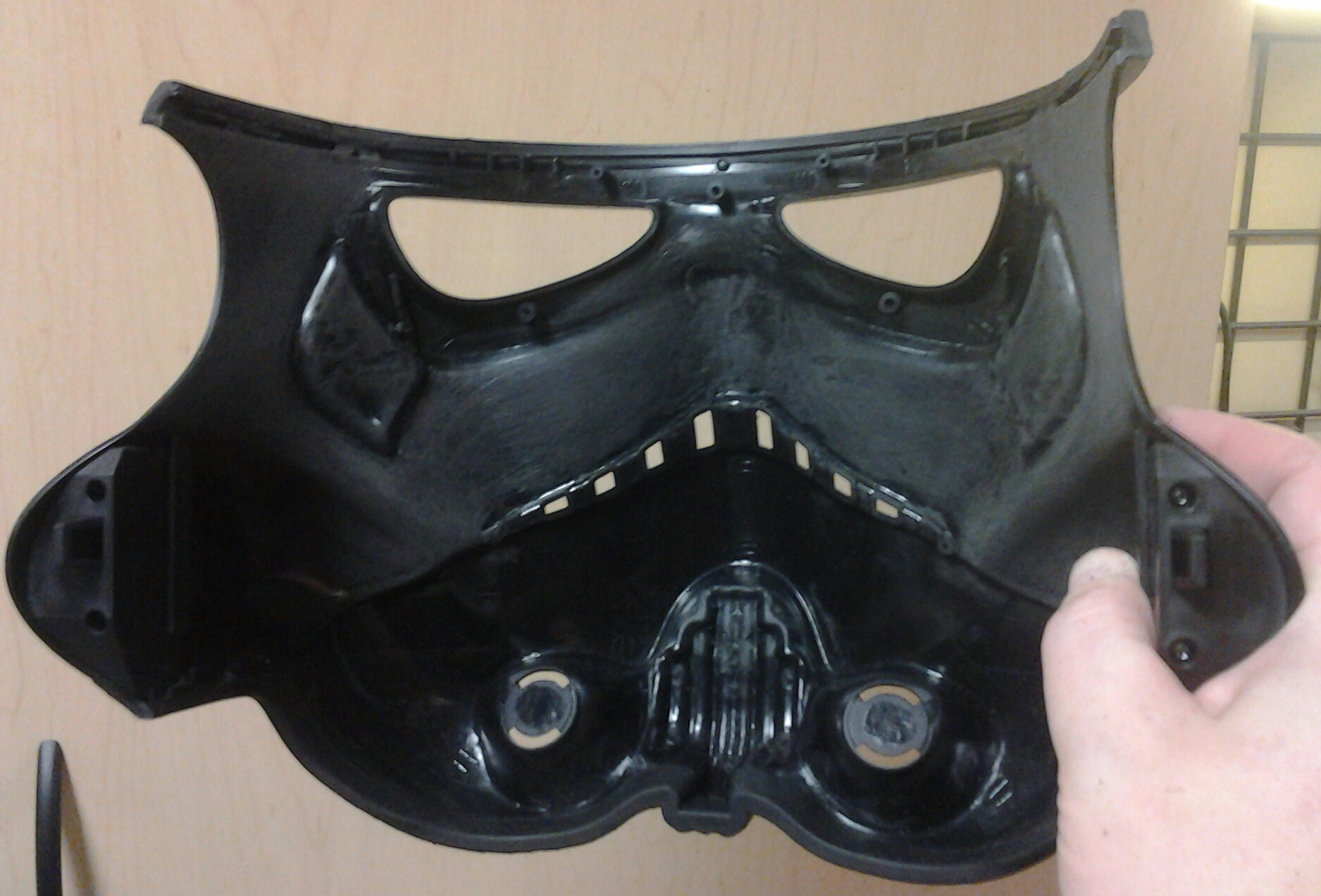 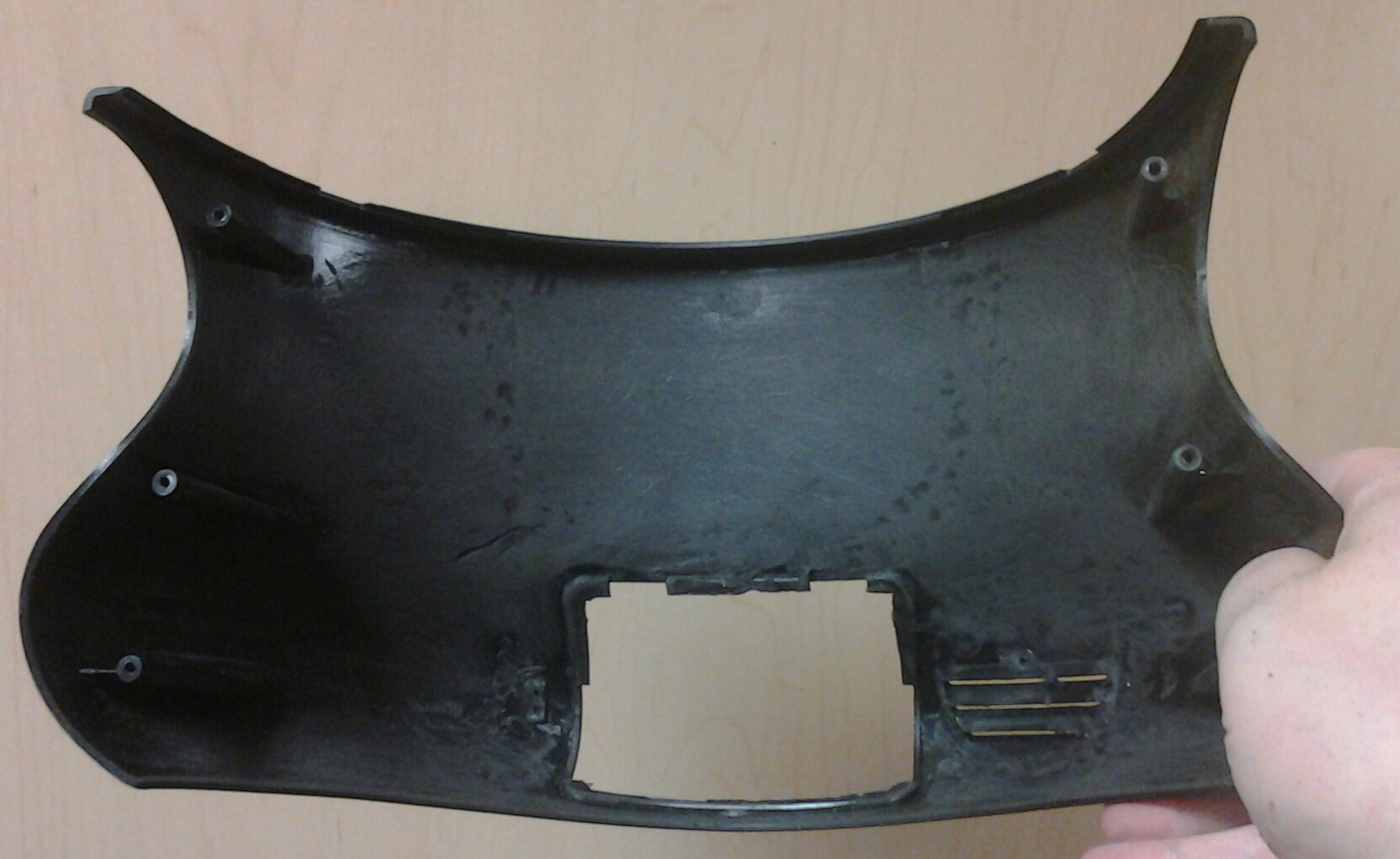 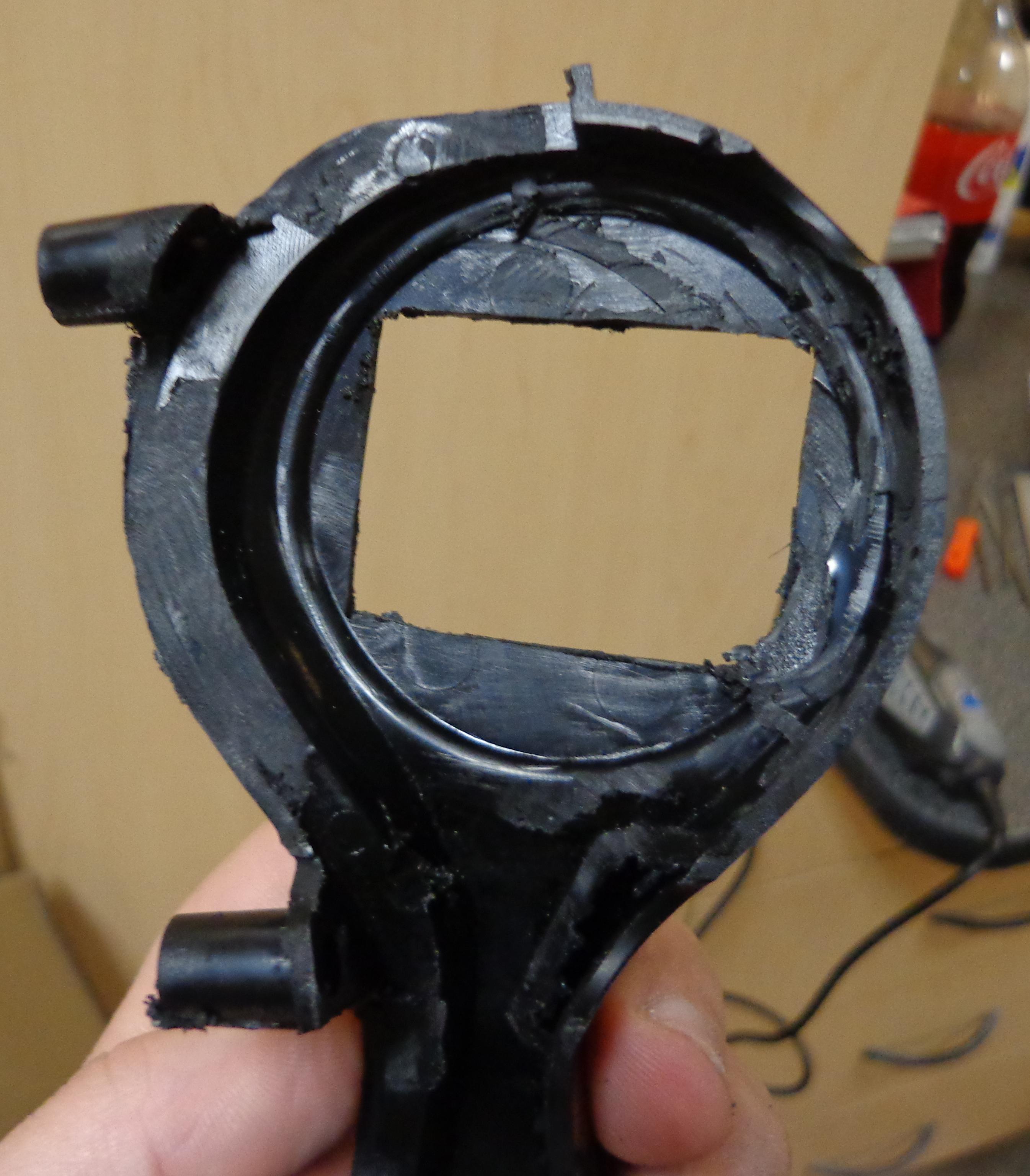 More pics later this afternoon, but I wanted to get even a slight bump on this. It's been eating at me.

RPF PREMIUM MEMBER
So I have two roughly standard Stormtrooper helmets I'm building out of these -- discounting paint jobs. Everything up to this point has been with my first attempt, where I was, ah, having all my learning experience. After going a little in the wrong direction, I am presently here with the cap-n-back, which I epoxied together ages ago. Cleaned up a bit of the inside and, as you can see, did some trepanning: 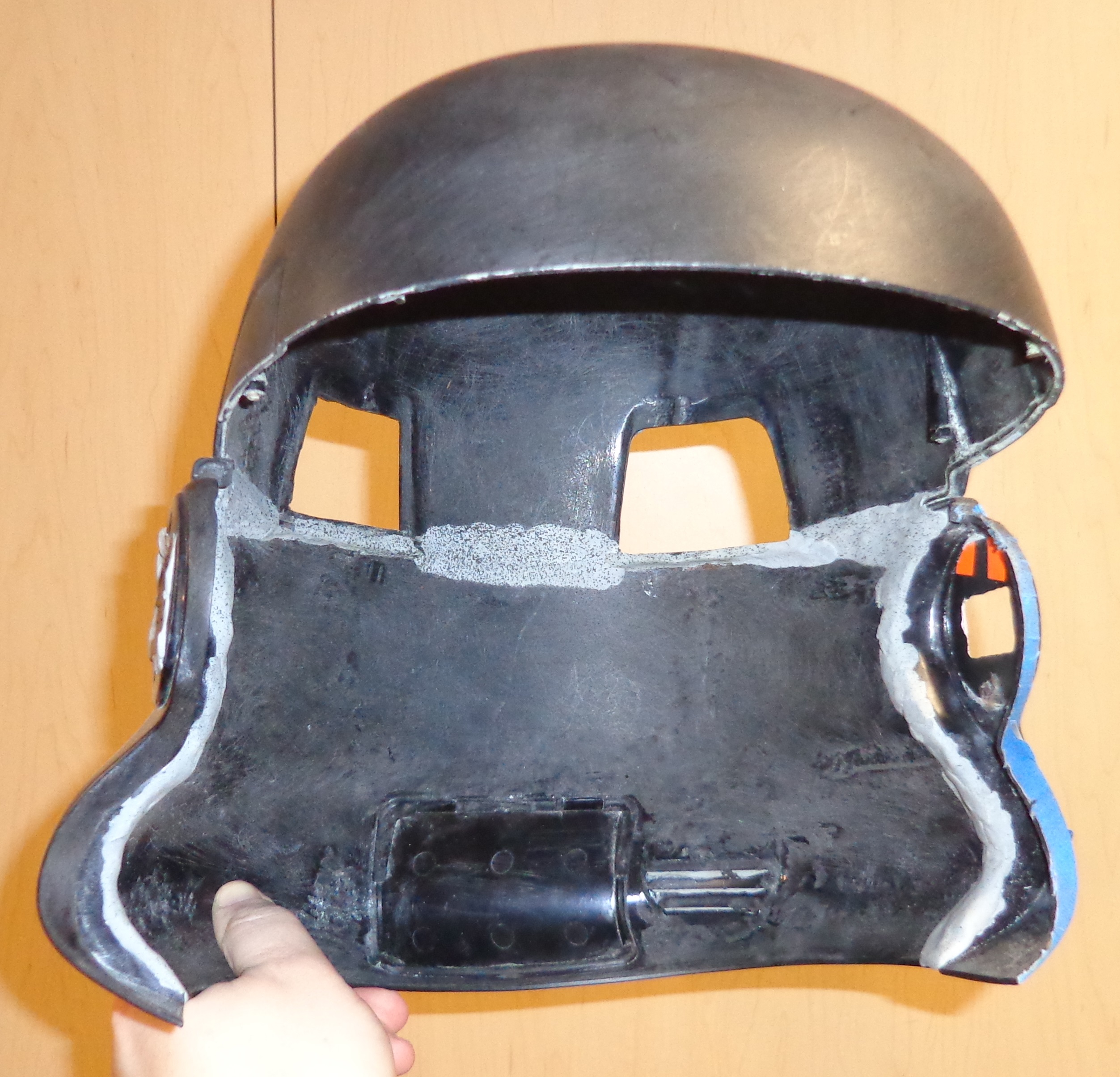 The traps around the helmet dome aren't quite accurate in shape, so I'm opening up all four to the right size, with new traps being made to put in from behind: 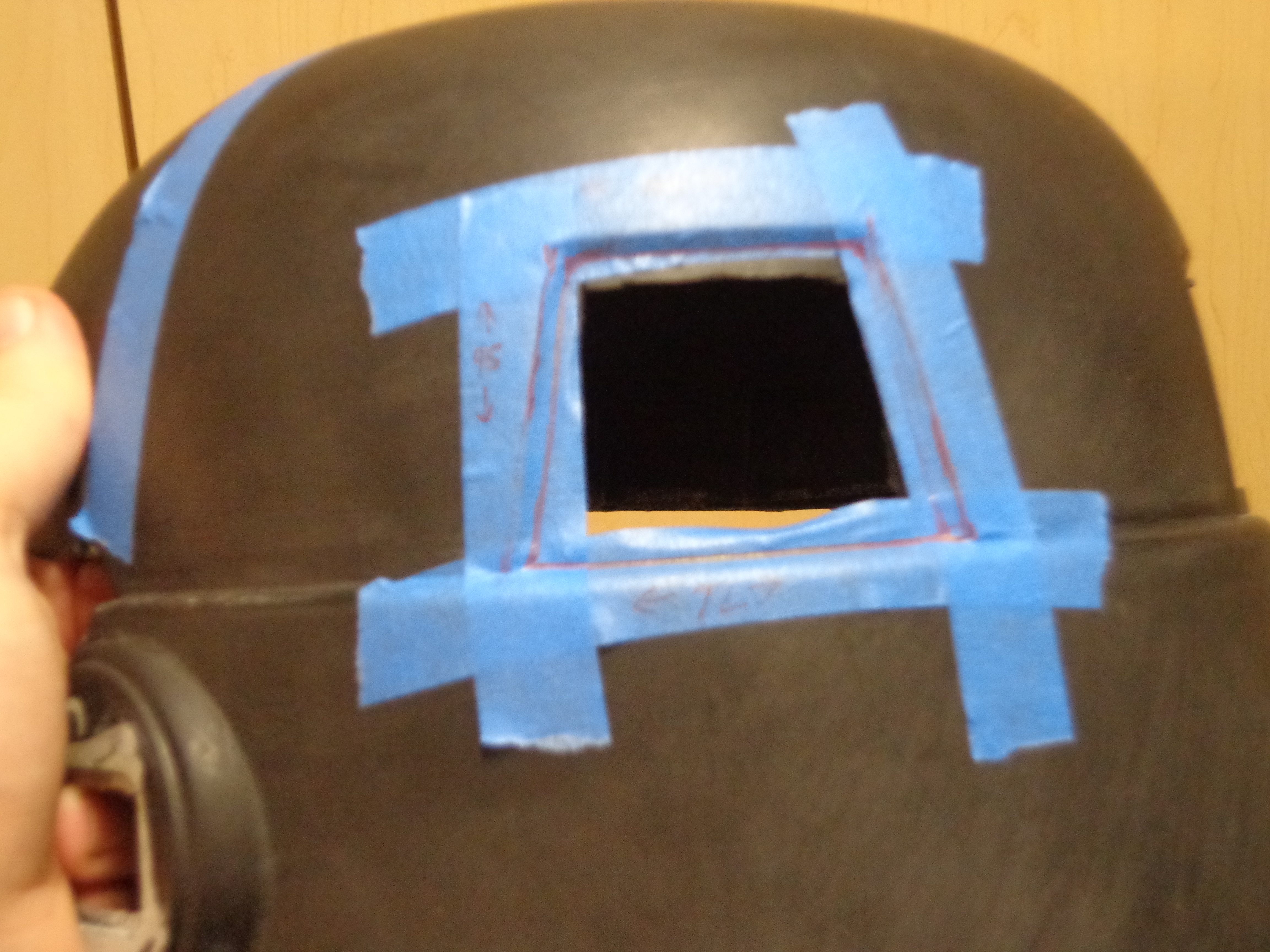 The faceplate got further butchery. The brow band got cut off entirely, and the tears and chin grille got cut out. I went back to my initial take on the tube stripes -- annoyance that they made them physical slits in Rogue One. So those are filled in and smoothed over, for good: 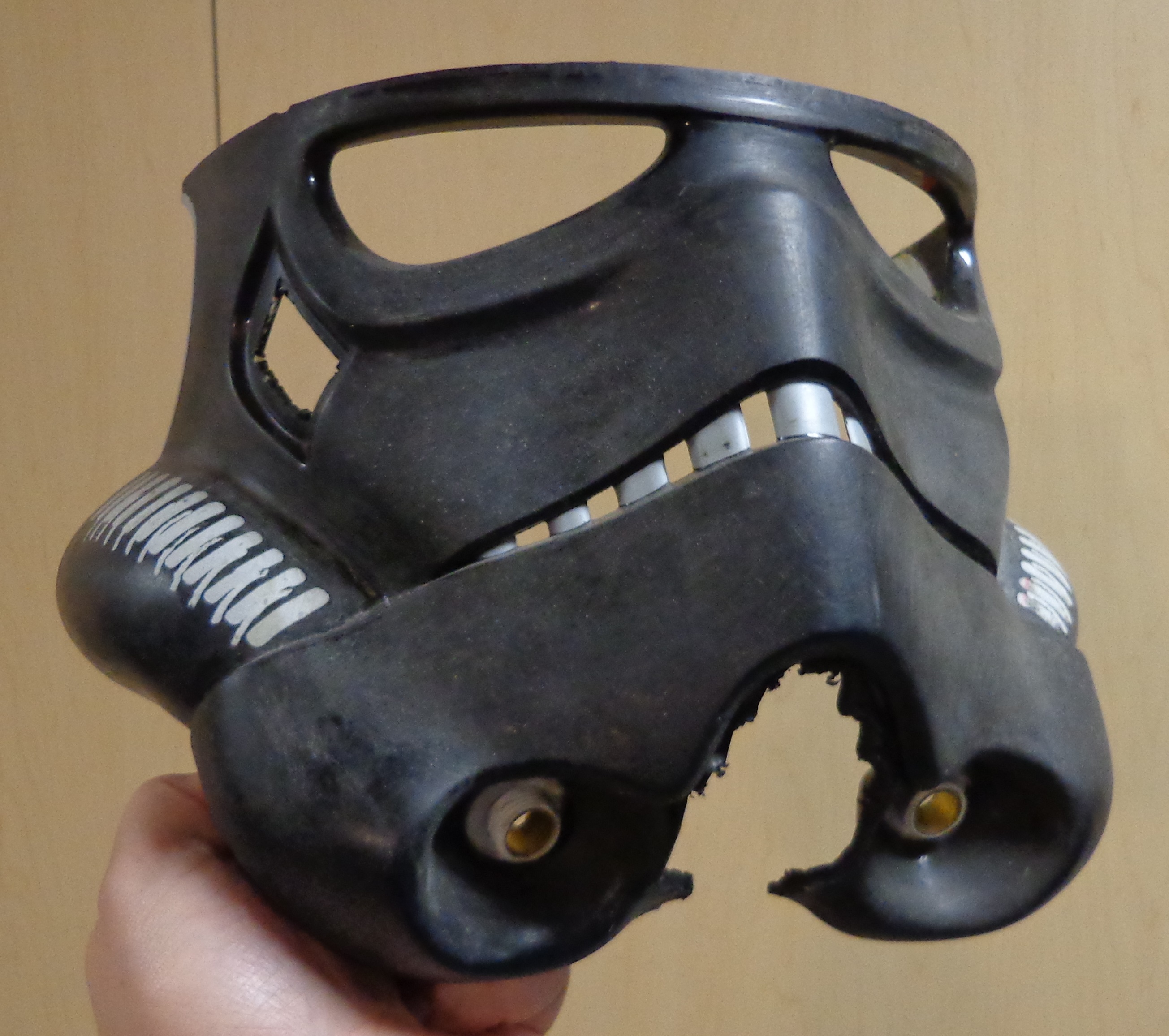 The lower return edges under the chin and around the sides are getting reshaped and extended to better match the originals (Stunt version, particularly): 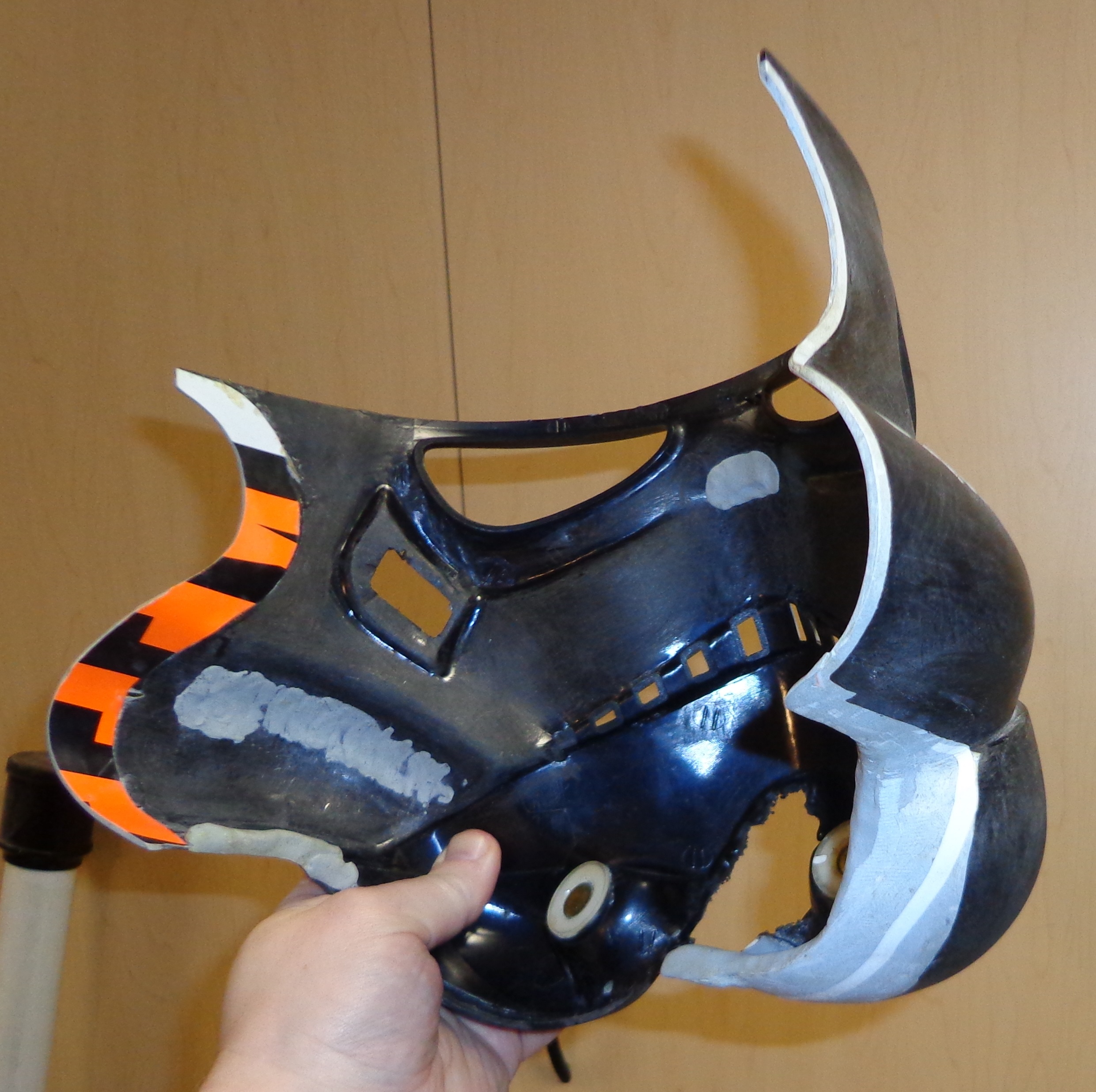 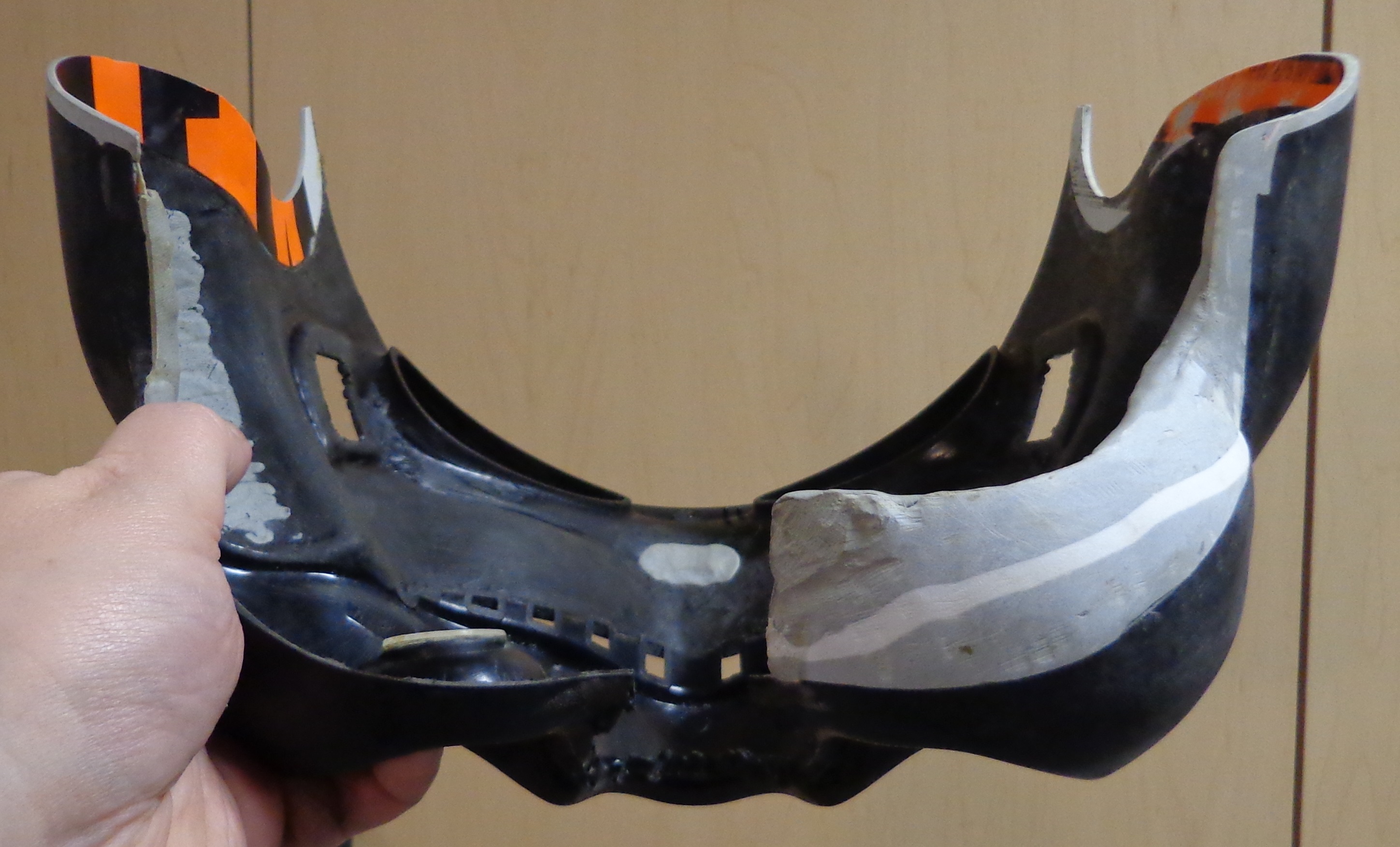 Jumping over to my second Shadow Trooper helmet, I can show how I better tackled the traps and extending the brow: 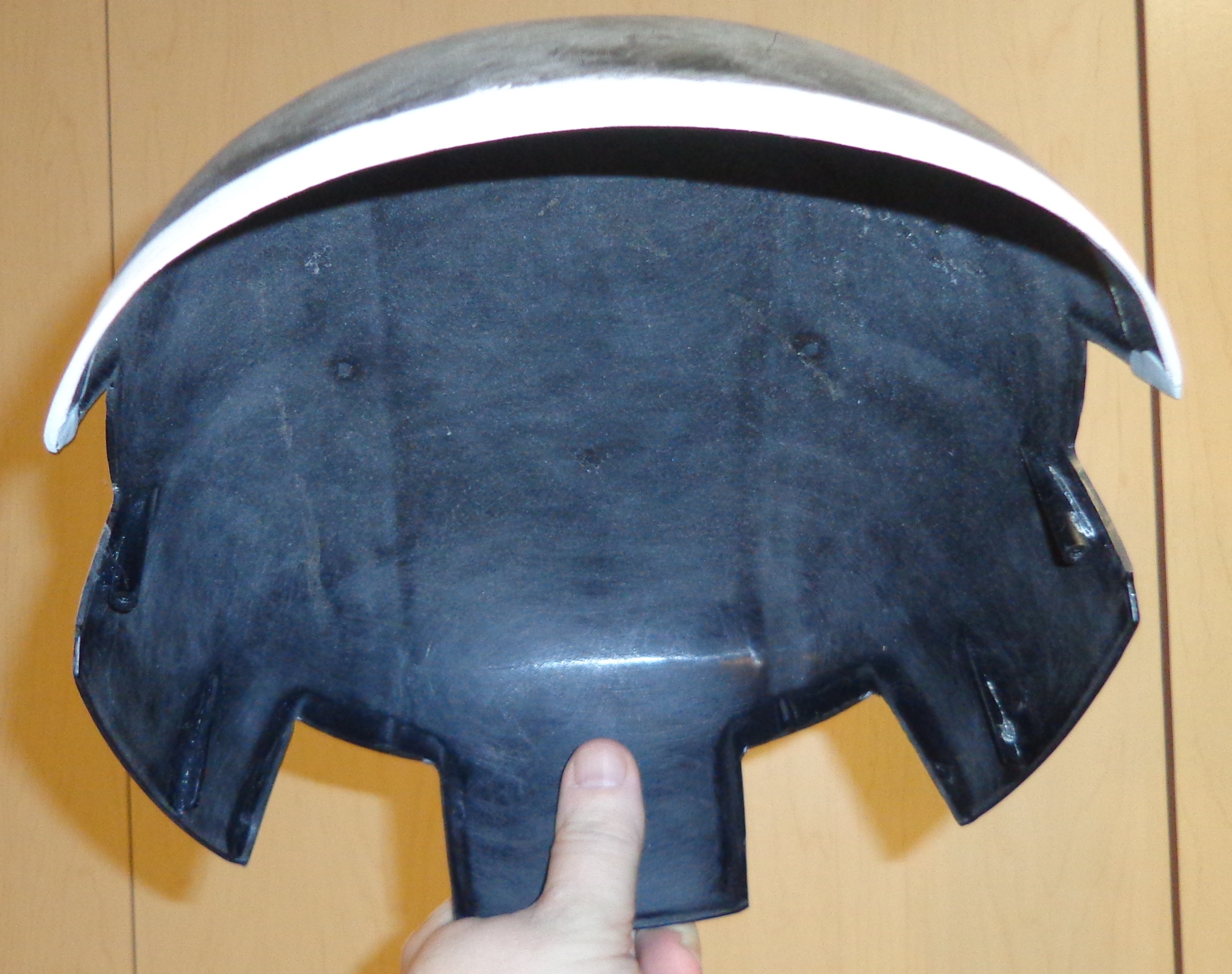 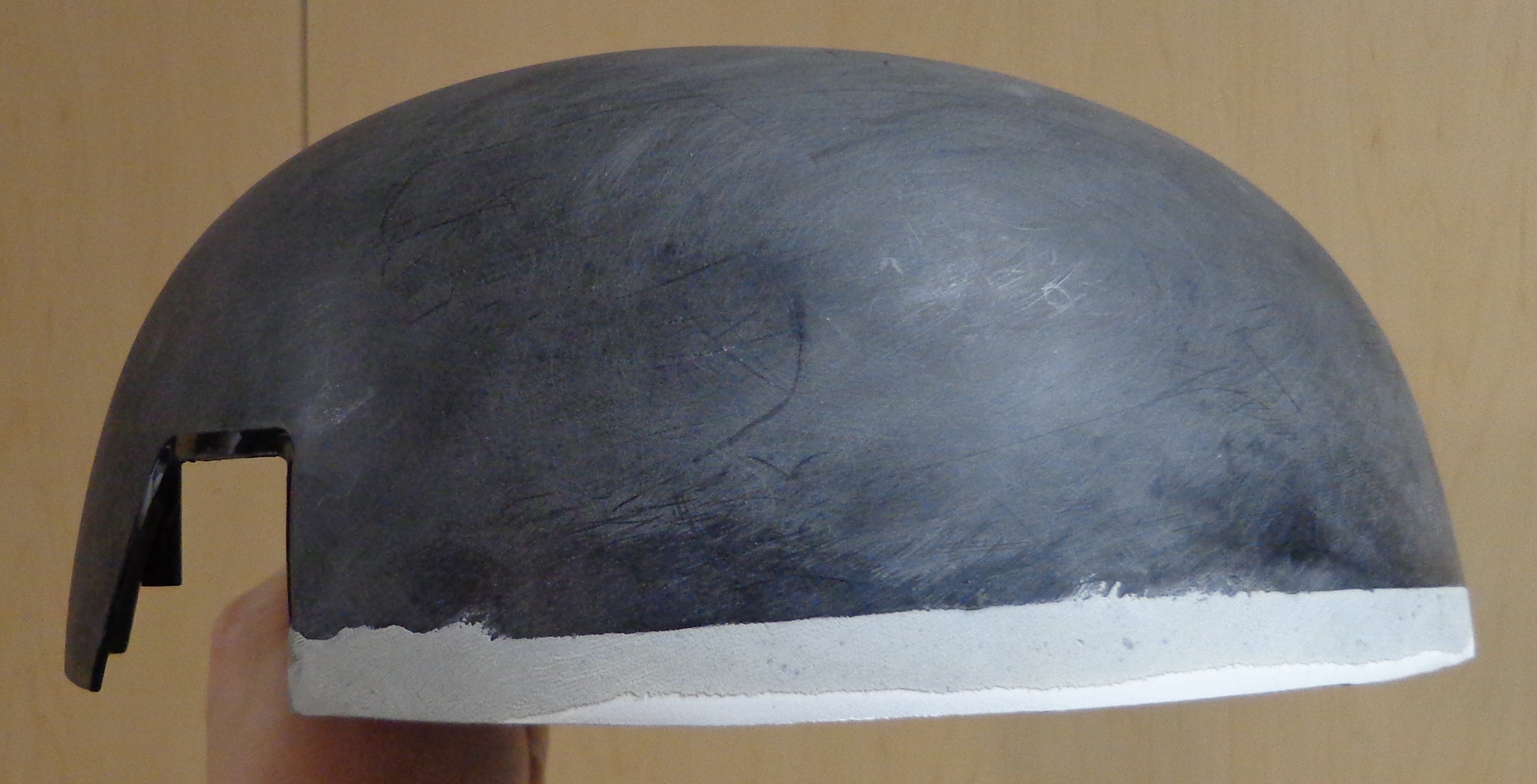 A decent amount of what time and energy I've been able to bend to working on anything has been getting all these up to the same relative points -- breakdown and discarding of unneeded bits, cutting out the traps and tears and chin grilles, extending the brow, tearing off the lower front rubber trim, closing everything up in the back, and grinding everything out where needed. Also accumulating the rest of the lenses and other bits and bobs for the interiors.

I've taken inspiration from this thread for my own mods. Thanks!

Any progress since January?

RPF PREMIUM MEMBER
Some. There were setbacks over the winter, plus ongoing pandemic issues, but I've gotten a lot of the tedious prep work on all four helmets up to the same point:

• Cap front brow levelled
• Traps and tears cut out and reshaped (and temple traps repositioned on one)
• Earcap greeblie openings reoriented and reshaped (the latter on three of the four)
• Tube stripe indents filled, chin grilles cut out, neck trim removed and return edge reshaped and lengthened, plus faceplate back edge extended slightly
• Aerator bases installed on two, other two need more drastic work
• Tangential work on accessories and details poking along slowly -- I'll give a couple teases on that score...

I am building one helmet up as an idealized ANH Stunt, with a bayonet fitting for one aerator to attach the air hose as shown in ANH (rather than just tucking it up into the helmet). I have the Fruehauf kits and am working on scratch-building the escape pod shells. No photos ready to post yet -- it's all just loose bits of plastic at the moment.

I am building one helmet up with fixed aerators, but also with the enhanced targeting sensors from Solo: 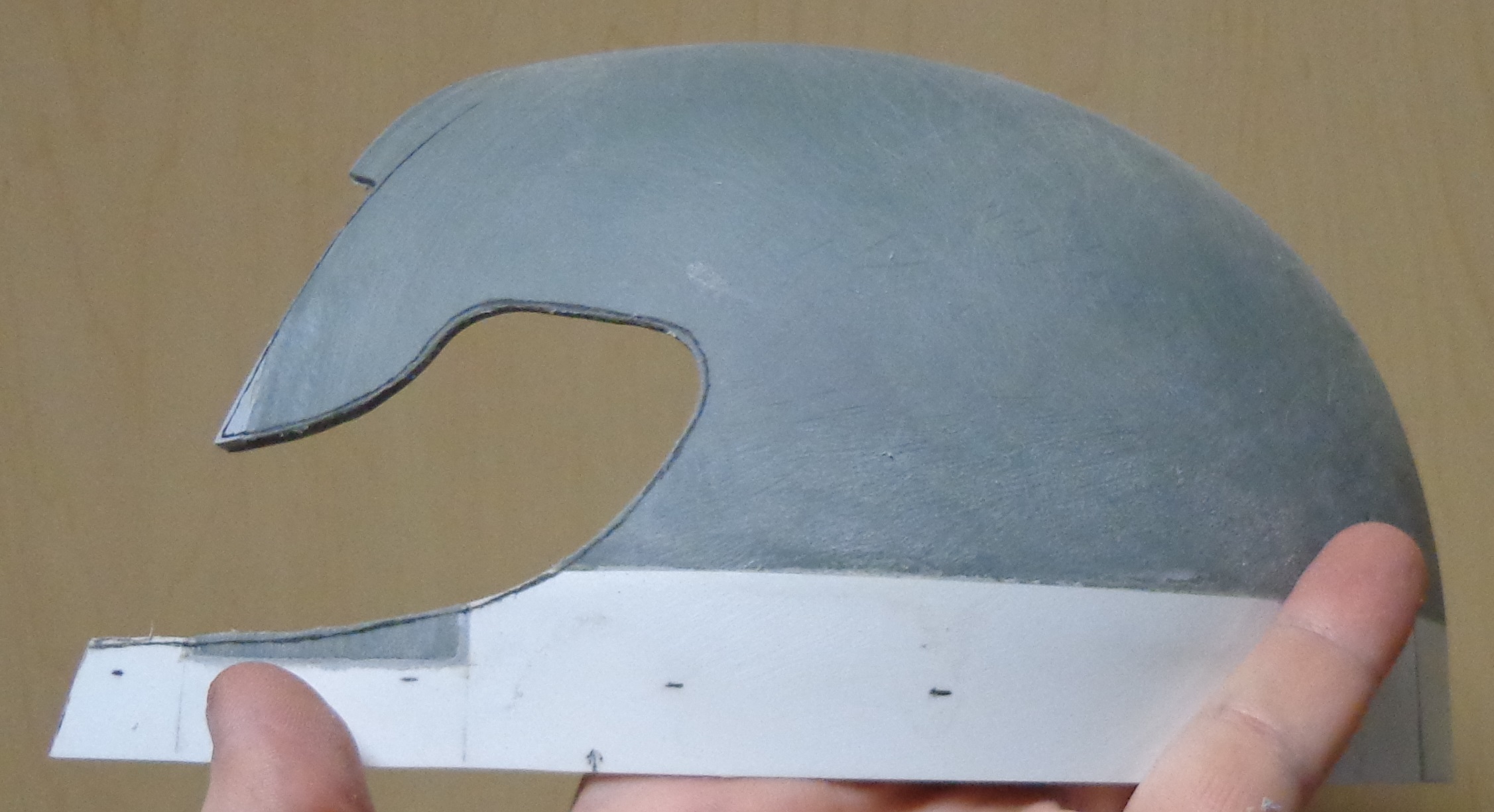 One I'm building to ROTJ spec. Thanks to CFO for the helmet kit so I could compare relative shapes. I'm building that kit up for a friend who wants to have her own Stormtrooper armor, and prefers the ROTJ version. So, perfect situation. I always knew the ROTJ helmets were "pinched" compared to how they were originally sculpted, but I didn't know by how much. I built a simple wooden box of the right rough dimensions, softened the cap with a heat gun, squished it in there, and let it cool. It's been sitting in tape to cut a new browline for ages (the pinching pushes the side edges down). I've yet to address the reshaping of the face and back.

The fourth is more ambitious. To date, as near as I've been able to find, no one's done an accurate Legacy Stormtrooper. Not the one Jan Duursema designed when she created them, anyway. The only ones I've seen are derived from the interior art done in later issues by a different artist. What she designed is more like a mashup of an ANH Stormtrooper with a BARC Trooper, with other additional tweaks: 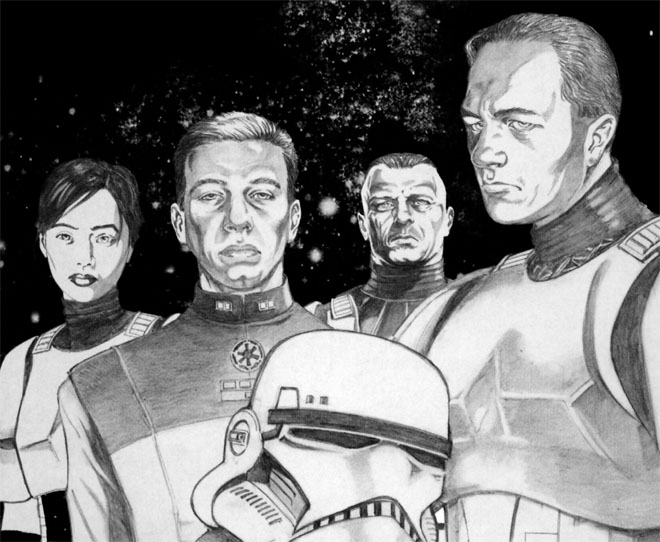 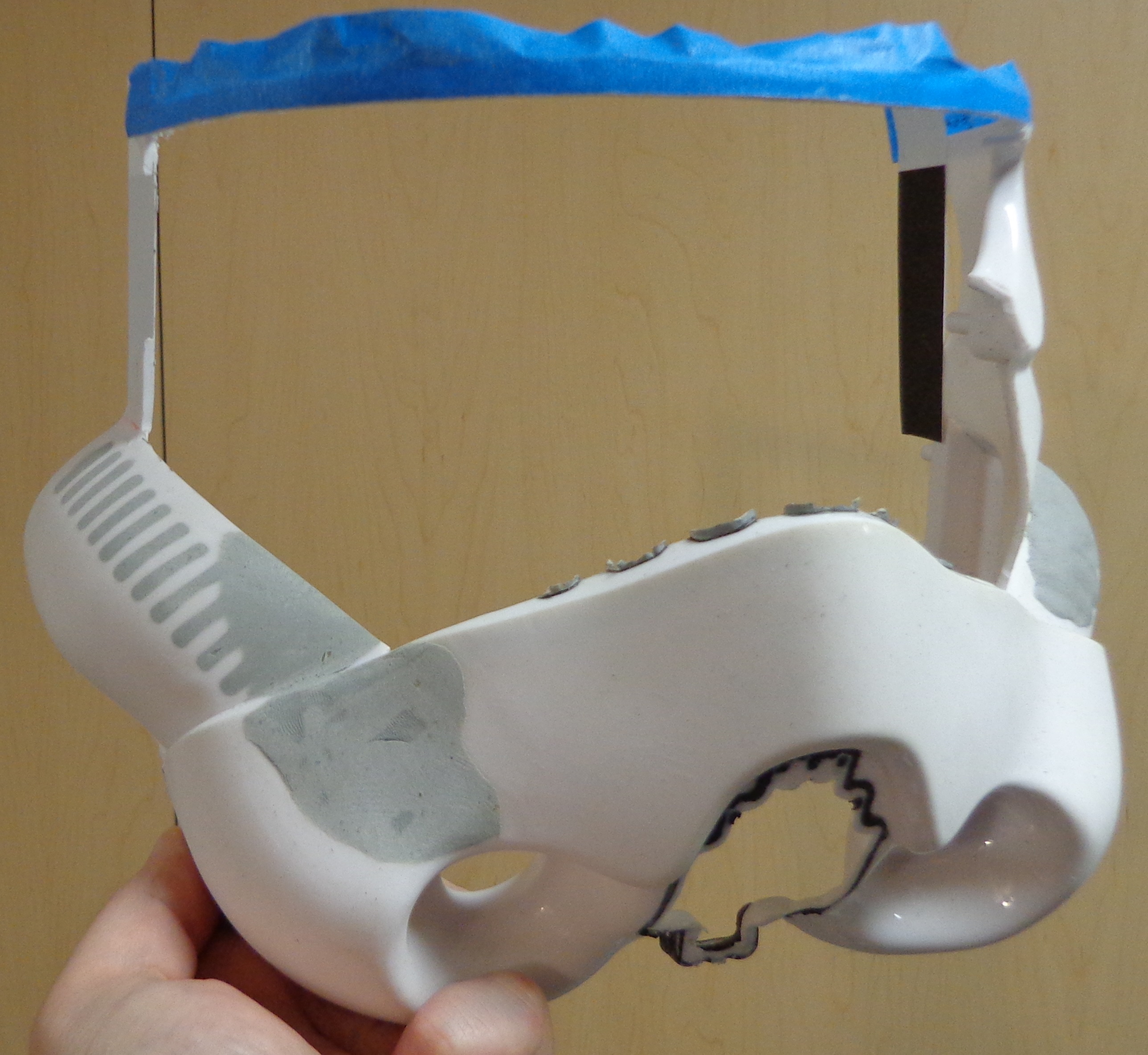 With a good base to work from for the face: 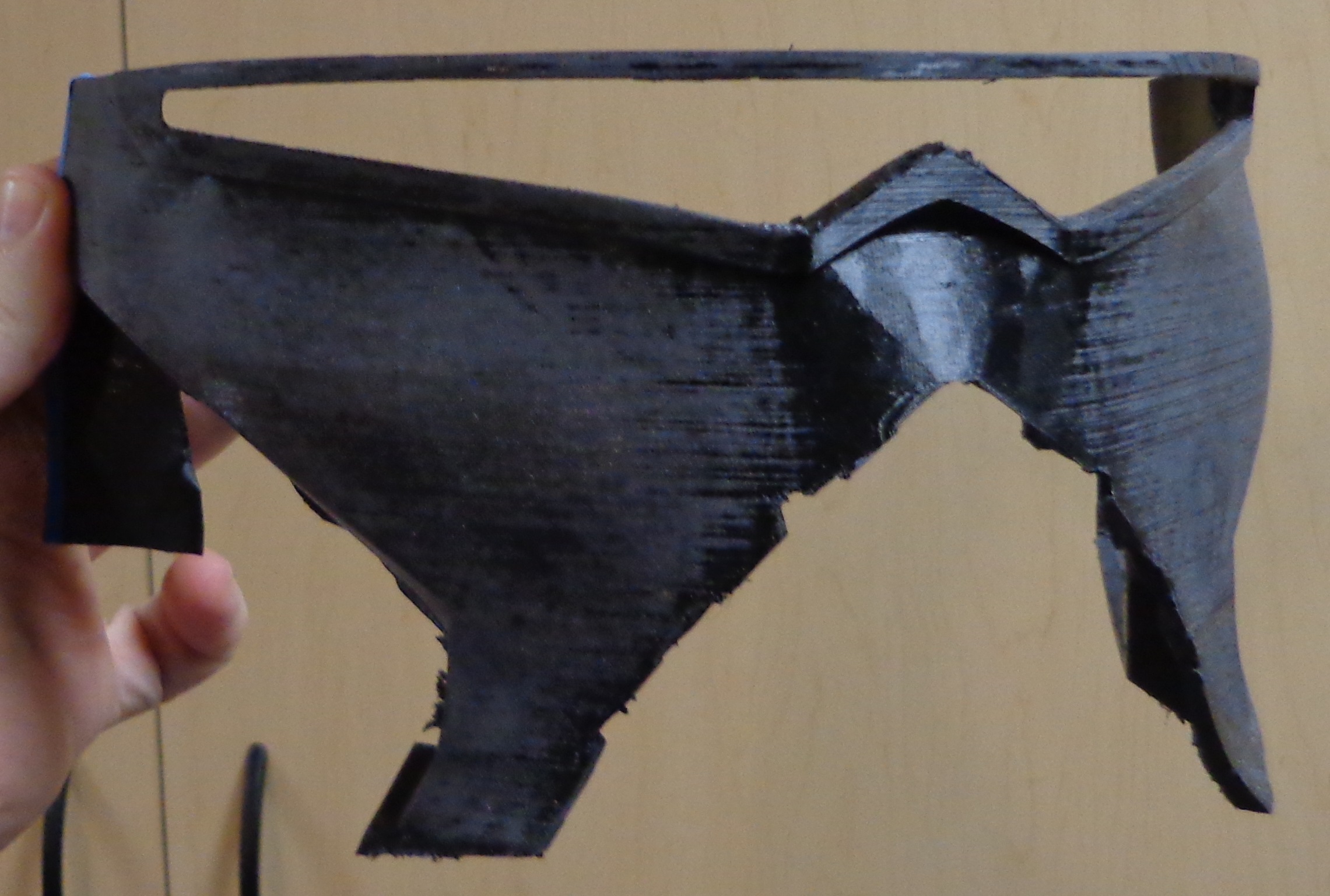 ...including a repositioned "nose"... 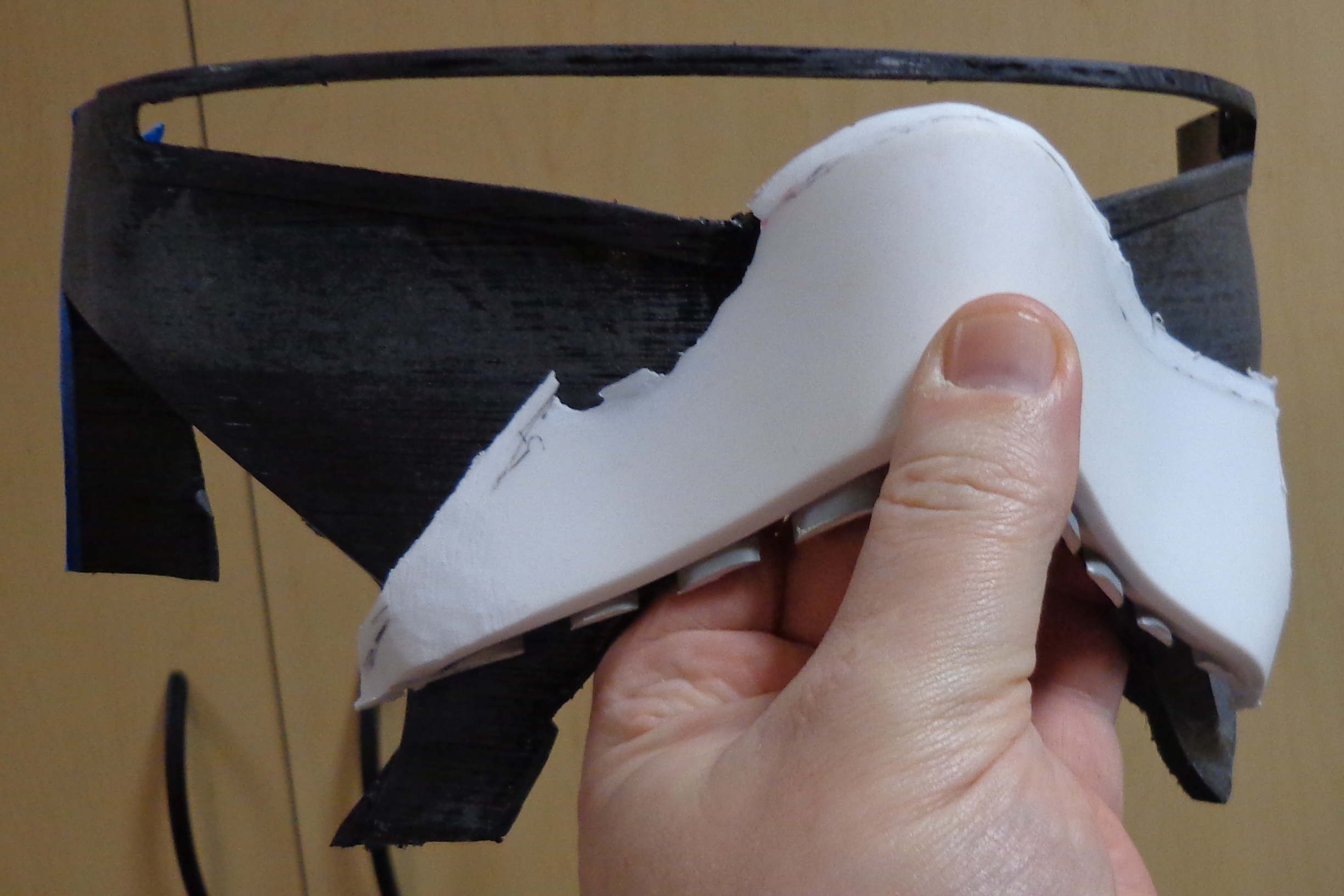 And, conveniently, the Solo style ear greeblies, flipped around, are quite a good match for the ones Jan put on these: 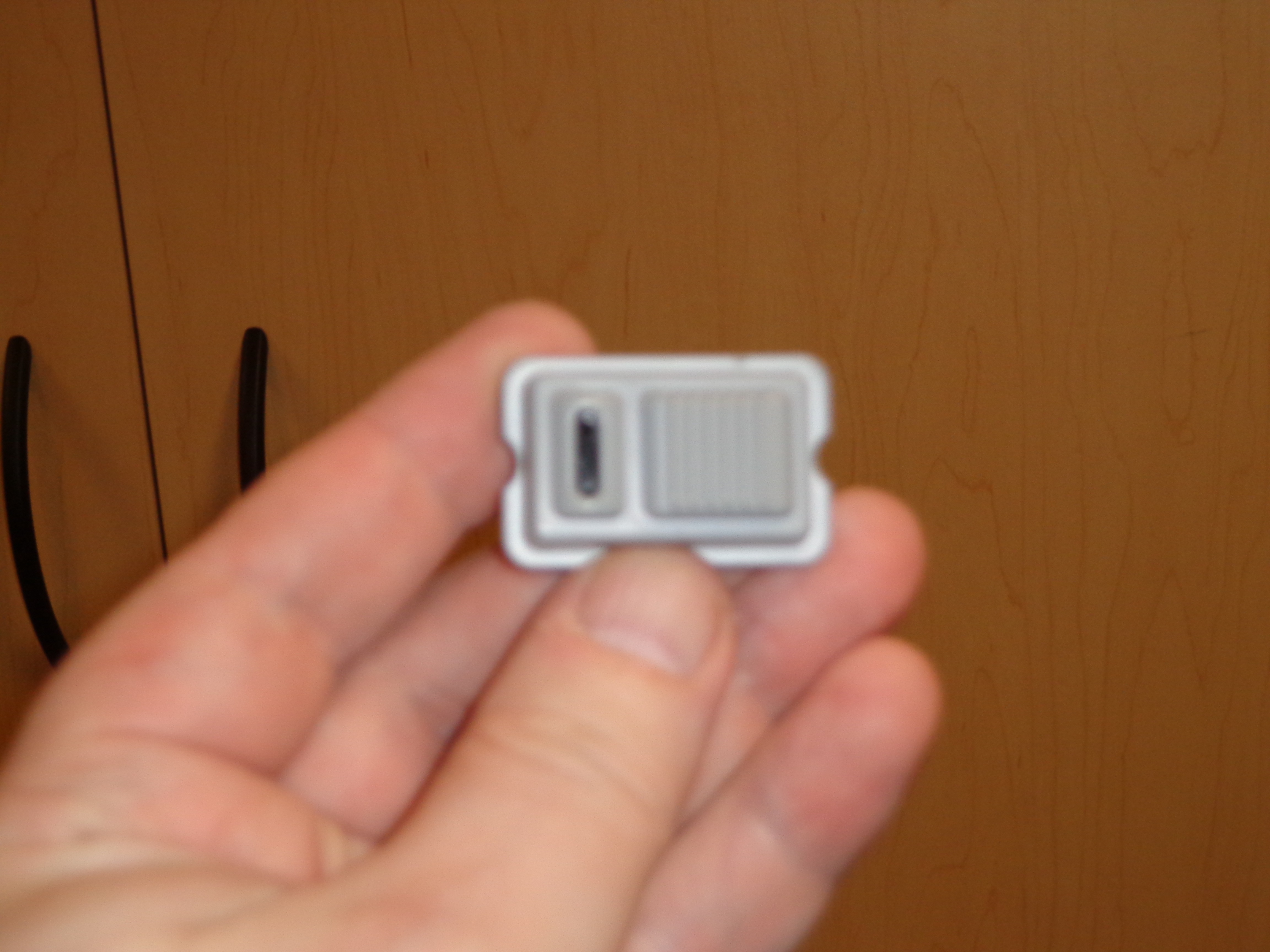 I need to get stuff laid out, properly photographed, and collated into their own discrete posts in here. But yes -- there has been some movement...

RPF PREMIUM MEMBER
A teensy bit more, while I'm taking a break from kitchen stuff... Here's the best reference I have for the enhanced targeting housing: 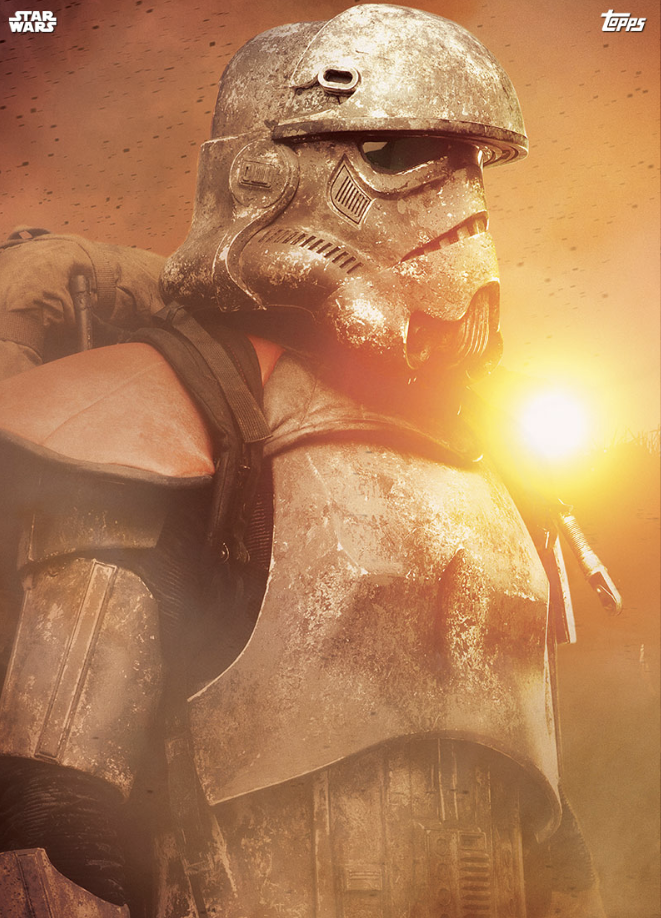 • Brow trim that is just a little shorter, vertically than the regular helmet brow trim. I have marked mine accordingly via photoscaling. 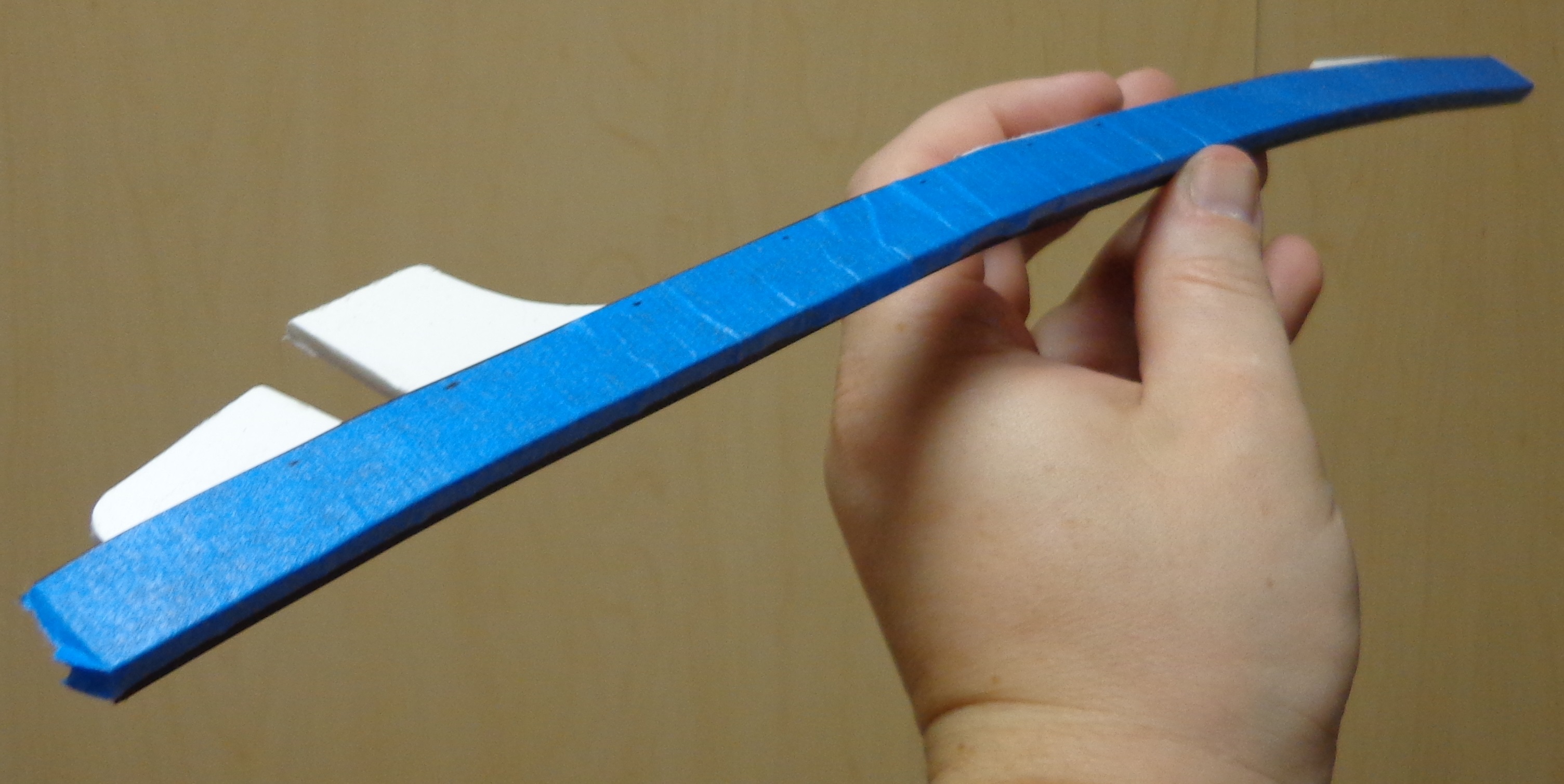 (The sintra chips are in there to hold the spacing for straight cuts.)

• Fun times parsing what's what in the undercut. The outer rubber brow trim is obvious enough. From the "bridge of the nose" between the lenses you can see the upper faceplate band and the rubber brow trim of the helmet itself, as here: 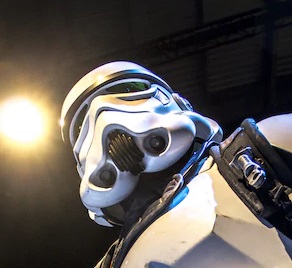 And between those is another thin crescent of material that comes down as far as the outer brow trim and has two rectangular cutouts with greeblies in them, positioned roughly in line with the lenses. I cut two crescents, one out of 1mm and one out of 3mm sintra, the latter to stack behind the former, after the notches are cut out of the thinner piece. 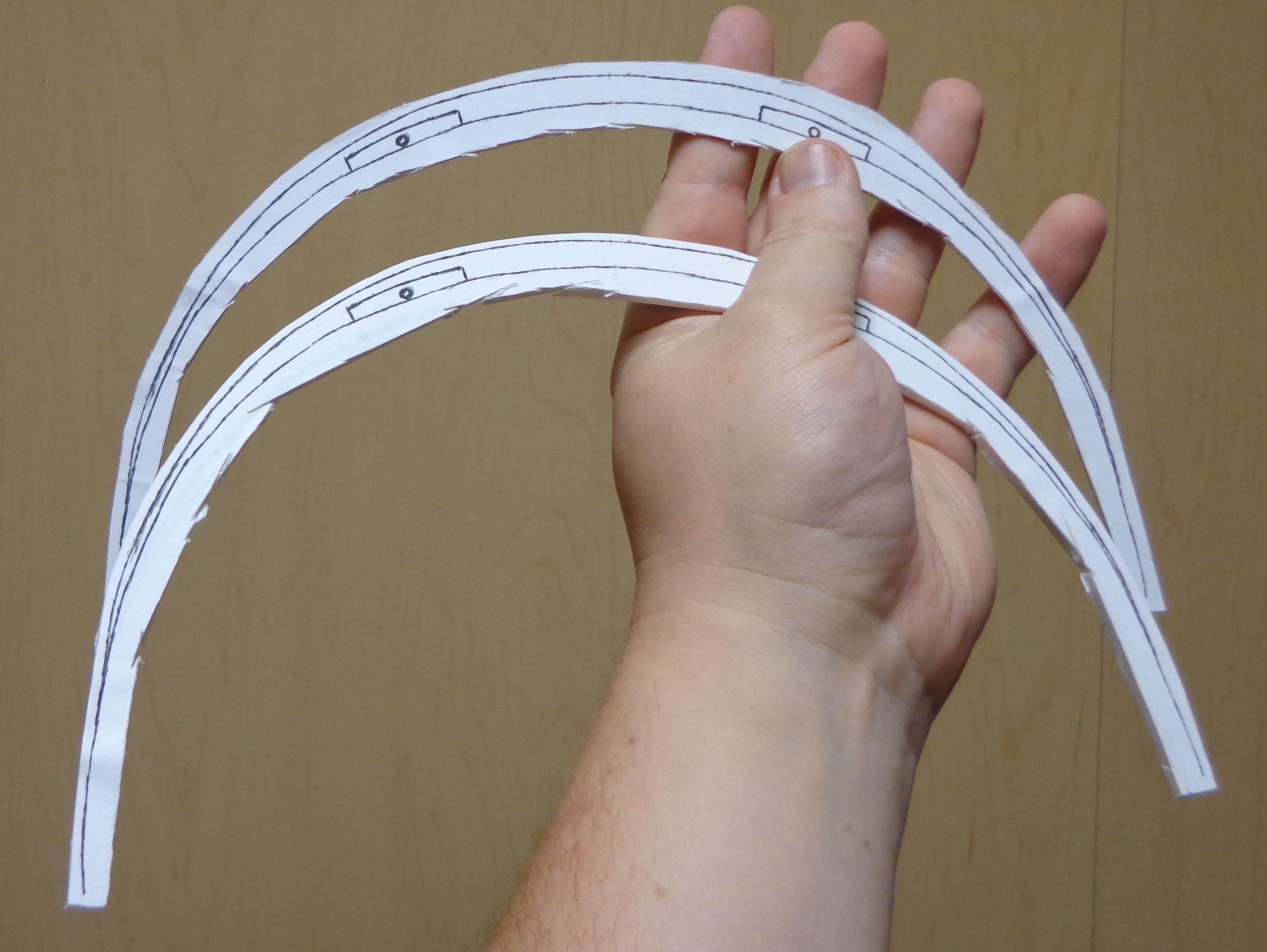 These will get fine tuned as they get attached to the inside of the forehead shield, and I have these to stick in for the greeblies: 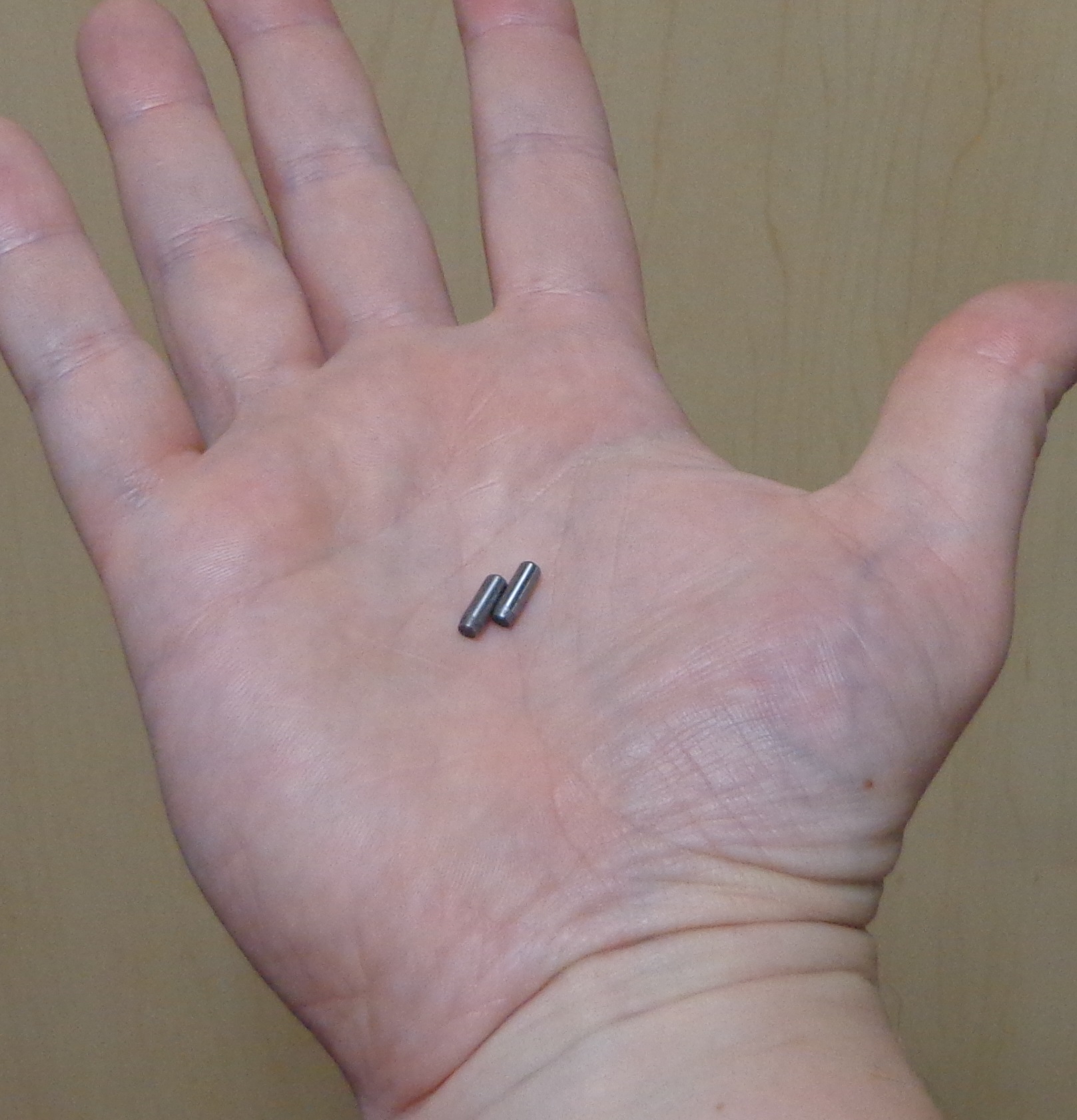 I have built up the oval mounting lugs, as well, but don't seem to have pictures of them uploaded yet. I'll get on that. Which leaves the back edge of the forehead shield. Assuming Anovos' prototype is reasonably accurate to the film prop, which we never see clearly, this is what I'm aiming for: 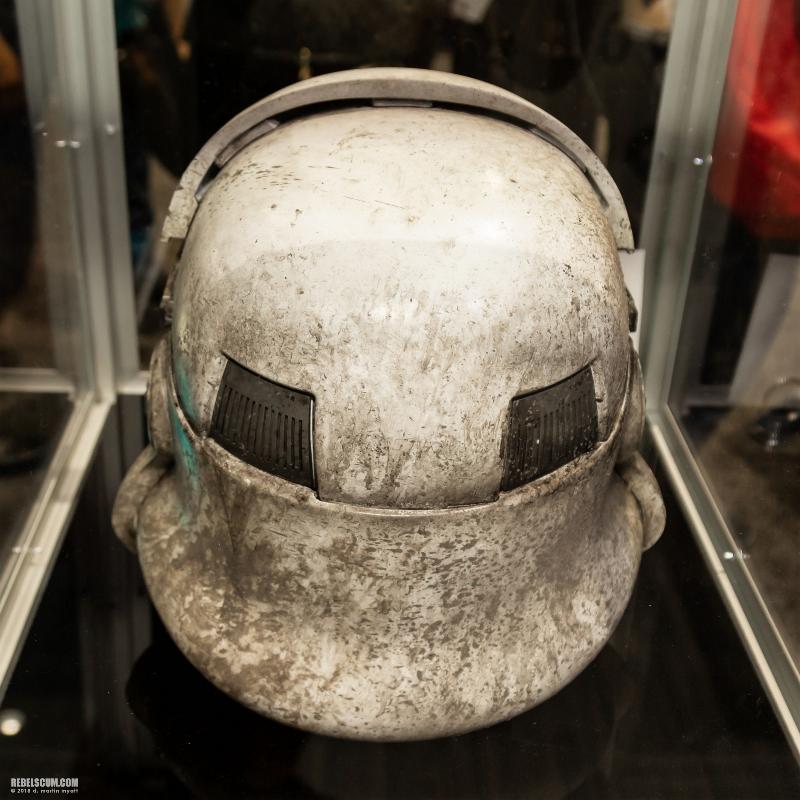 ...And is where I'm currently at with layout and fabrication -- marking the shield's approximate position on the helmet dome, creating a cutout template out of cardstock at that point, marking the outer face of the shield, measuring and marking where the inner face is, and figuring out the geometry and spacing. And what the heck to stuff under there. Those three spacers are obvious enough, and the gaps indicate they're part of the array, not attached to the helmet. I plan to employ magnets there. The stuff down around the side lugs is harder to make out, though, so that's going to be some experimentation and error.

Today at 2:08 AM
Inquisitor Peregrinus

Saturday at 10:10 AM
James Hammond