RPF PREMIUM MEMBER
Yeah, I do it a really simple, ghetto way. You can get an indexing table and all the tools to get finer cuts and details...but I don't have the funds to invest in that when my method derives the same results.

All I have is a mill, vice, and end-mill bit. If I just cut two of the valleys opposite each other, the pommel will center/seat itself. I mark where to cut on the pommel (valley), which itself is off-center like the rest of the master, after cleaning up the raw cast a bit; I do a few shallow passes with the mill to cut the valleys to depth. To do the angles, I just turn the the pommel in the vice so the angles of the cube lay perpendicular to the end-mill bit. I can rotate the mill itself but it just don't have the vertical space to get the angles I need. Again, take it down in shallow cuts. If there are those flat undercuts in the sides of the cubes, like on the Yuma/Hero, that's just not machining to meet the bottom of each valley.
Last edited: Mar 10, 2020

RPF PREMIUM MEMBER
First time seeing this! Wicked job! I too am in the process of a V3 cast.

Bryan with the pommel eyes! Gotta love it!!

This whole virus situation has left me sad that a lot of things I was looking forward to have been cancelled, and for all the dangers it has posed to people at risk. ...But this means I’ve had an absurd amount of time to work on this saber some more this past week.

First off, thanks BRR for that pommel diagram! You’ve got some eagle eyes. I don’t know how I stare at these images for seemingly hours and don’t pick up on stuff like that. Also that video of cutting the pommel cubes is really insightful Dann, watching it be done helps me understand it a lot lol. Thanks for sharing your method to PPP as well! It seems like there are a ton of ways to get the same results so whatever gets the job done works! And thanks for the kind words Halliwax, I’d love to see a V3 build from you sometime!

I think I’ve dialed in almost everything but the grenade rings, that still needs some work. I might make the pommel just a tad wider at the cube area, but I’m pretty satisfied with that now. The wind vane still needs a little bit of work on the curves, but I've gotten a lot closer imo as well. 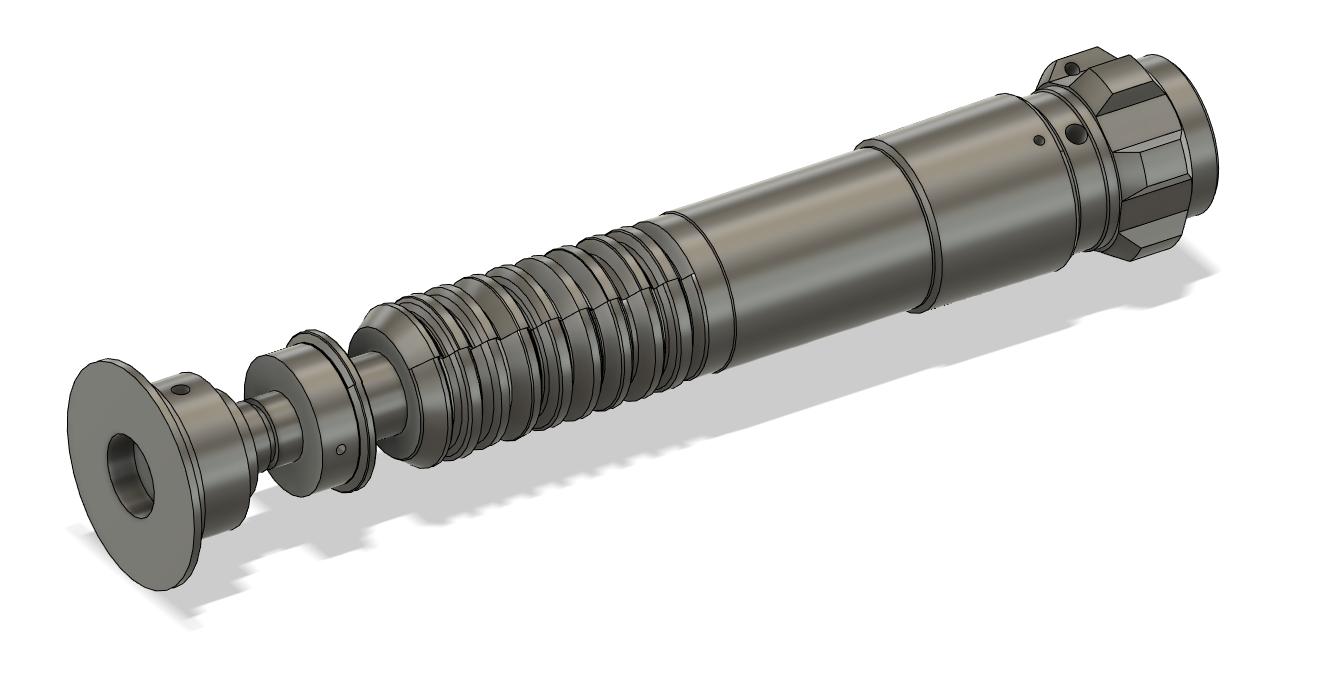 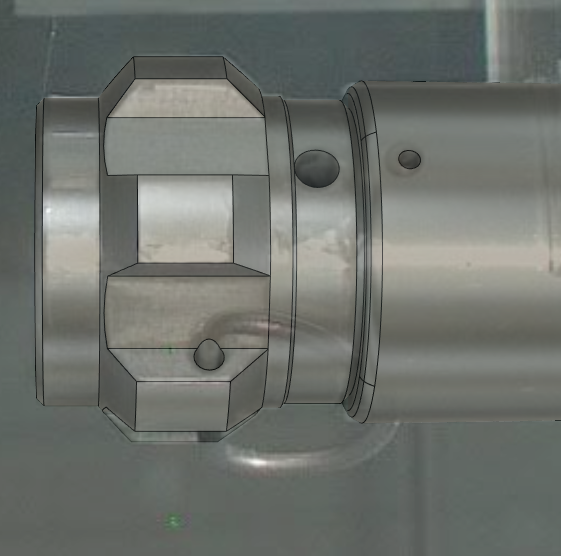 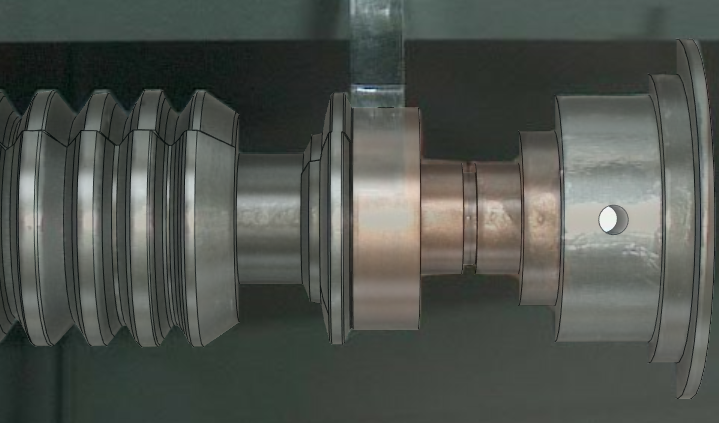 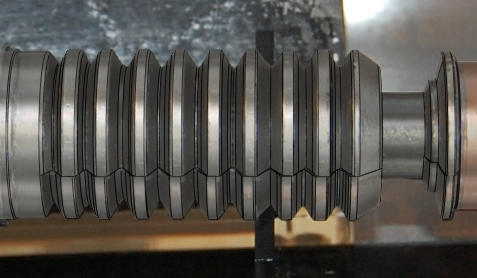 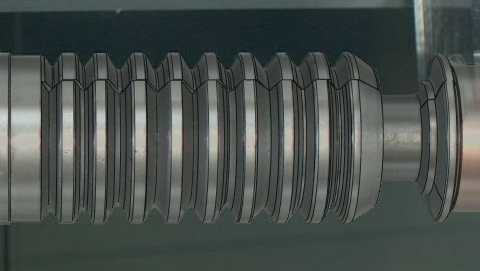 RPF PREMIUM MEMBER
P.S. you have just hit the ‘most accurate V3 model’ slot imo. I would be very hopeful a run can be pursued based from this work

looking forward to your further refinements!

BRRogers said:
P.S. you have just hit the ‘most accurate V3 model’ slot imo. I would be very hopeful a run can be pursued based from this work
Click to expand...

RPF PREMIUM MEMBER
How's this one coming along Nathan?


BRRogers said:
P.S. you have just hit the ‘most accurate V3 model’ slot imo. I would be very hopeful a run can be pursued based from this work

looking forward to your further refinements!
Click to expand...

Thanks for the kind words guys!

Nothing too much to report right now unfortunately. I was supposed to have at least a pommel and emitter en route to me by now, but the shops I was talking to are either closed or producing essential parts (for ventilators, etc) so I'd rather not distract them with lightsaber parts right now. But, I did manage to dig up some more reference photos after scrolling through a decade worth of photos on flickr with the tag 'lightsaber,' which provided me with some nice shots of the grenade rings, so I'm definitely going to take another pass at that soon!

Also, in a small attempt to make progress a few days ago, I grabbed some brass stock and made some clamp cards using electrical tape for the lines and it really does the trick! seems like that may be what was used on it. Hopefully in a few weeks I'll have something more solid in hand

RPF PREMIUM MEMBER
I actually did the same thing a few years back. Sold a few of the cards.

Used brass stock and thin art tape. I'm pretty positive it IS exactly what was done.

Glad to see someone else come to the same conclusion that I did!

RPF PREMIUM MEMBER
I did the same with one of my prototypes. It's a dead ringer for sure.

RPF PREMIUM MEMBER
I found a few OLD pics of my spirit-of-obiwan V3, with the card I made.

These pics were taken shortly after I got the hilt, when the actual run happened. 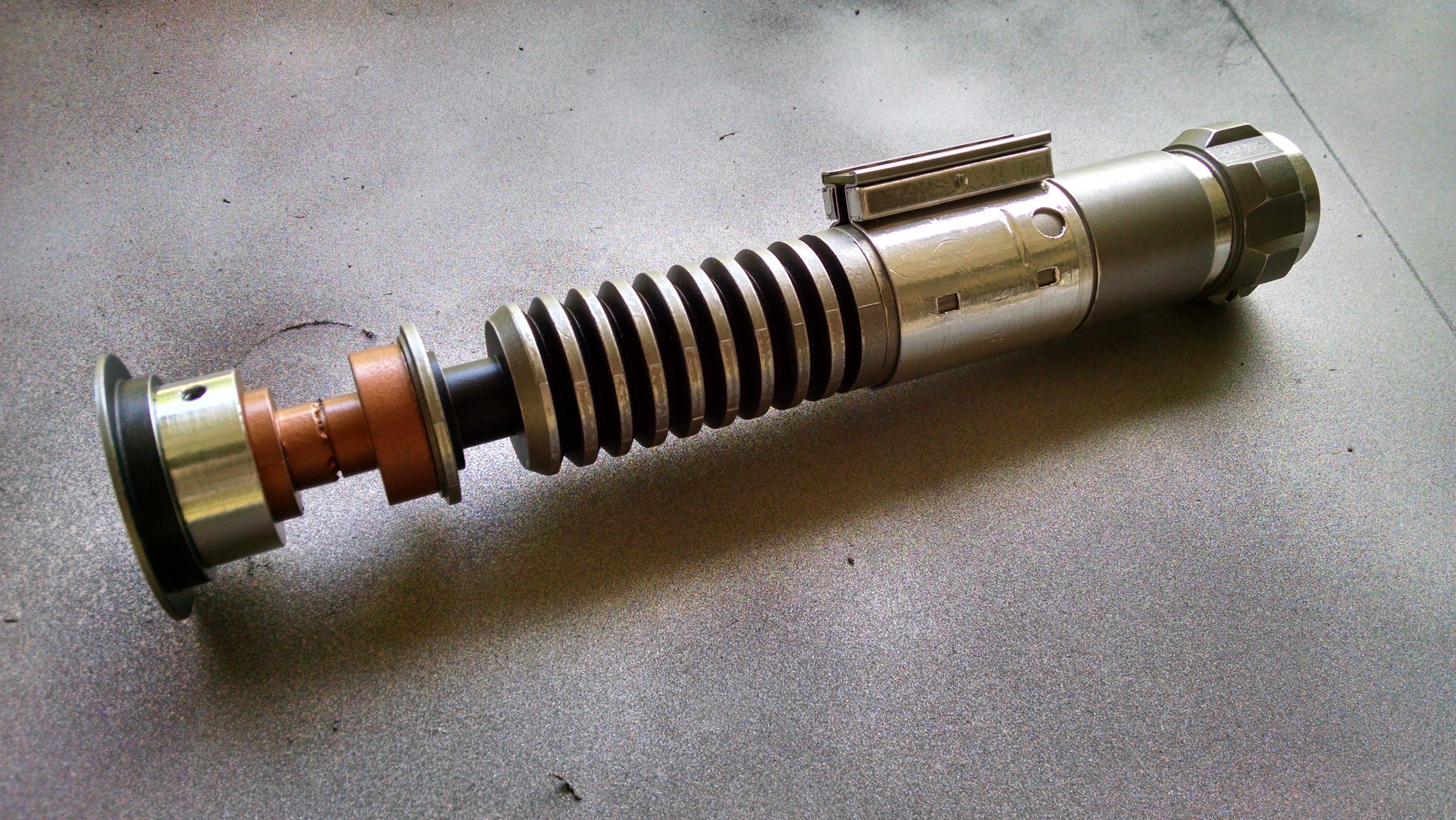 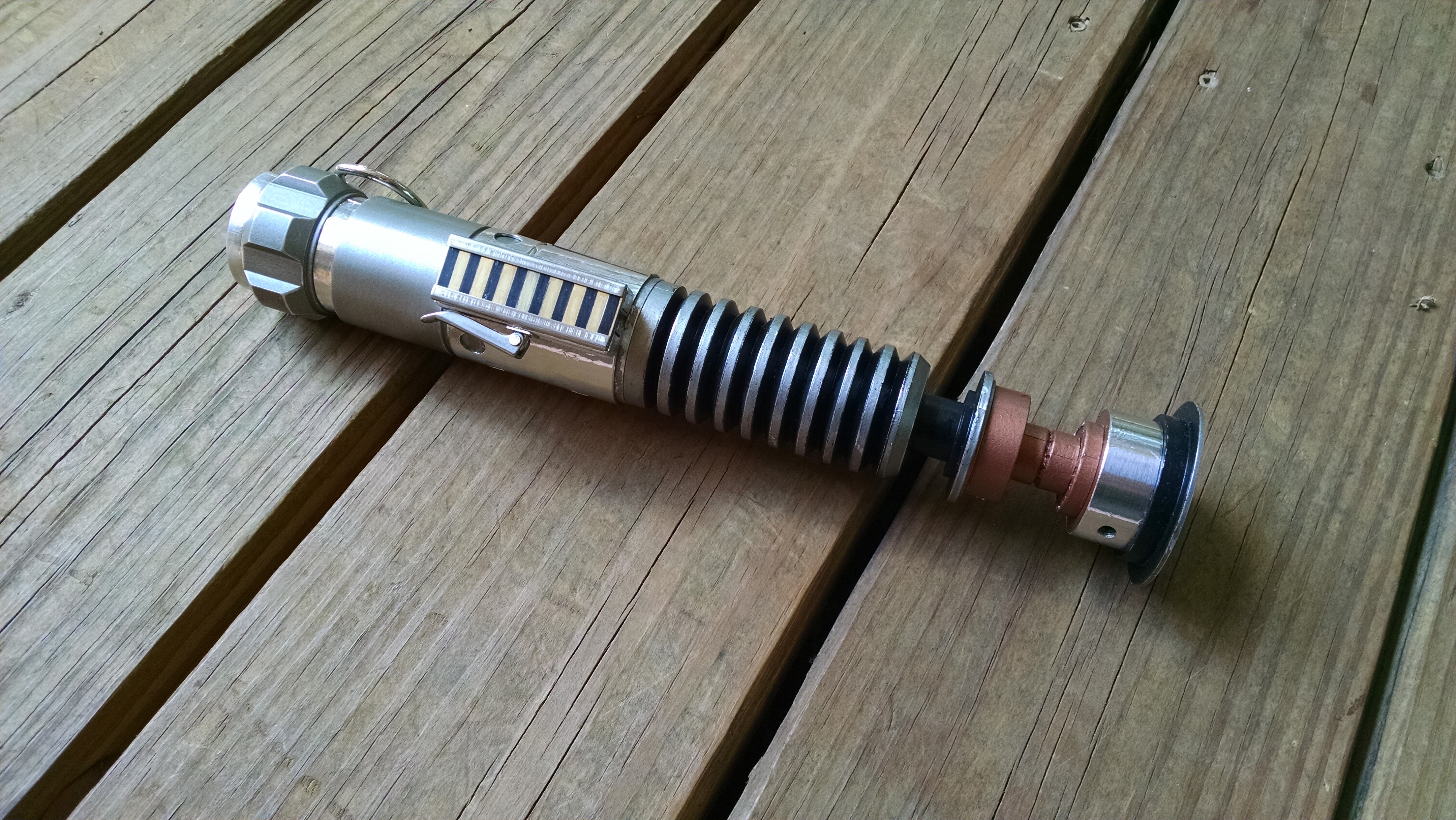 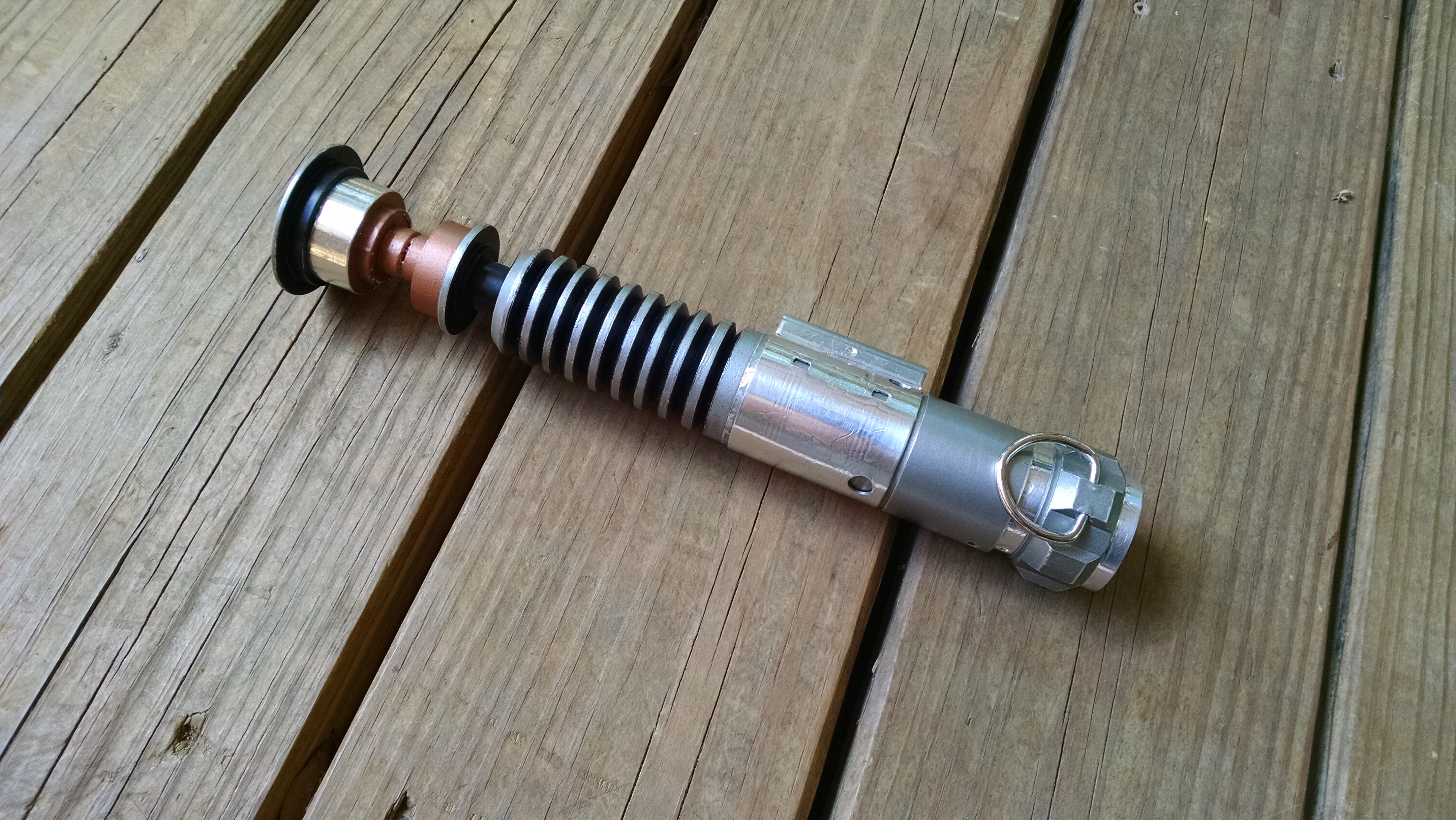 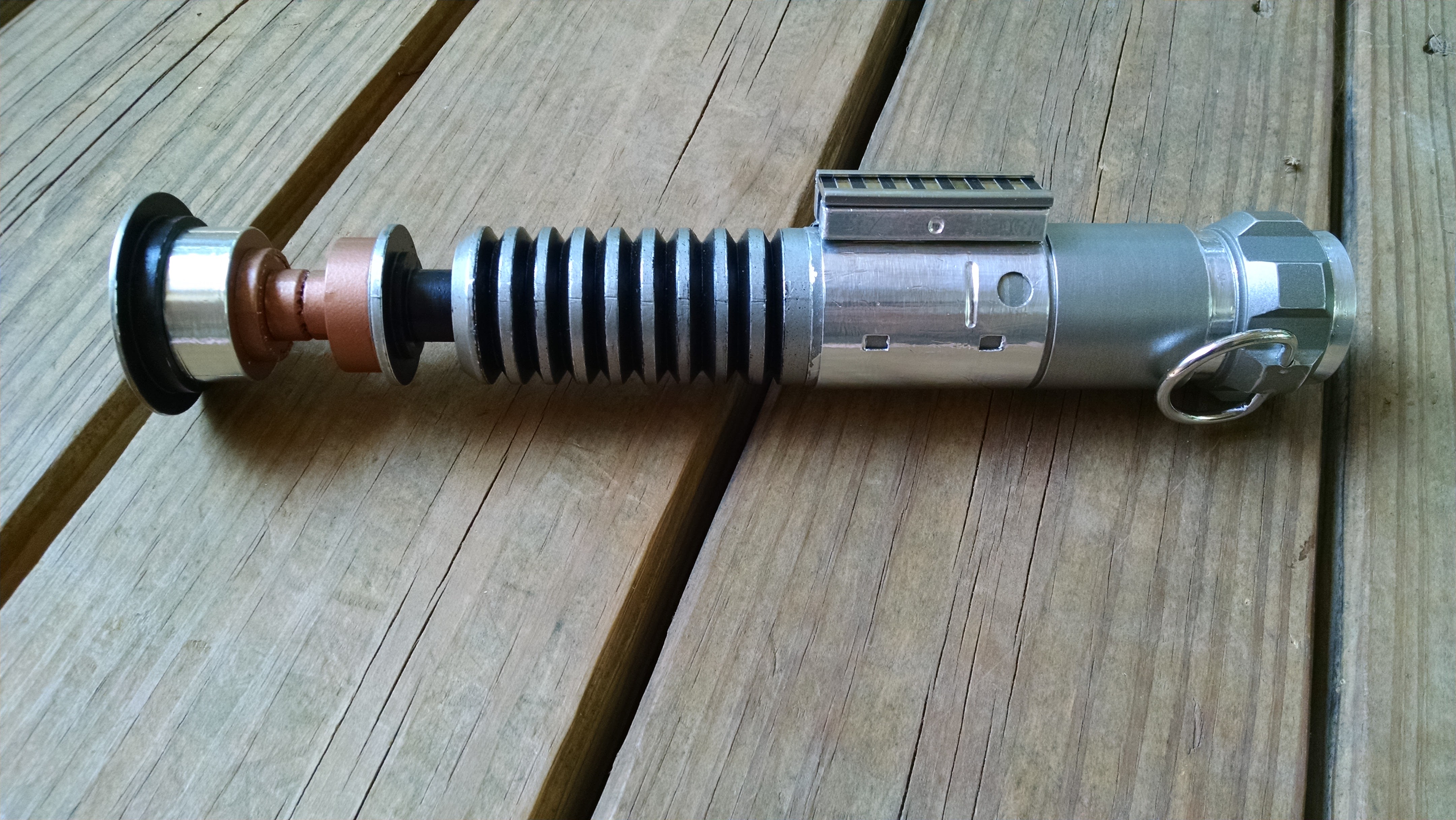 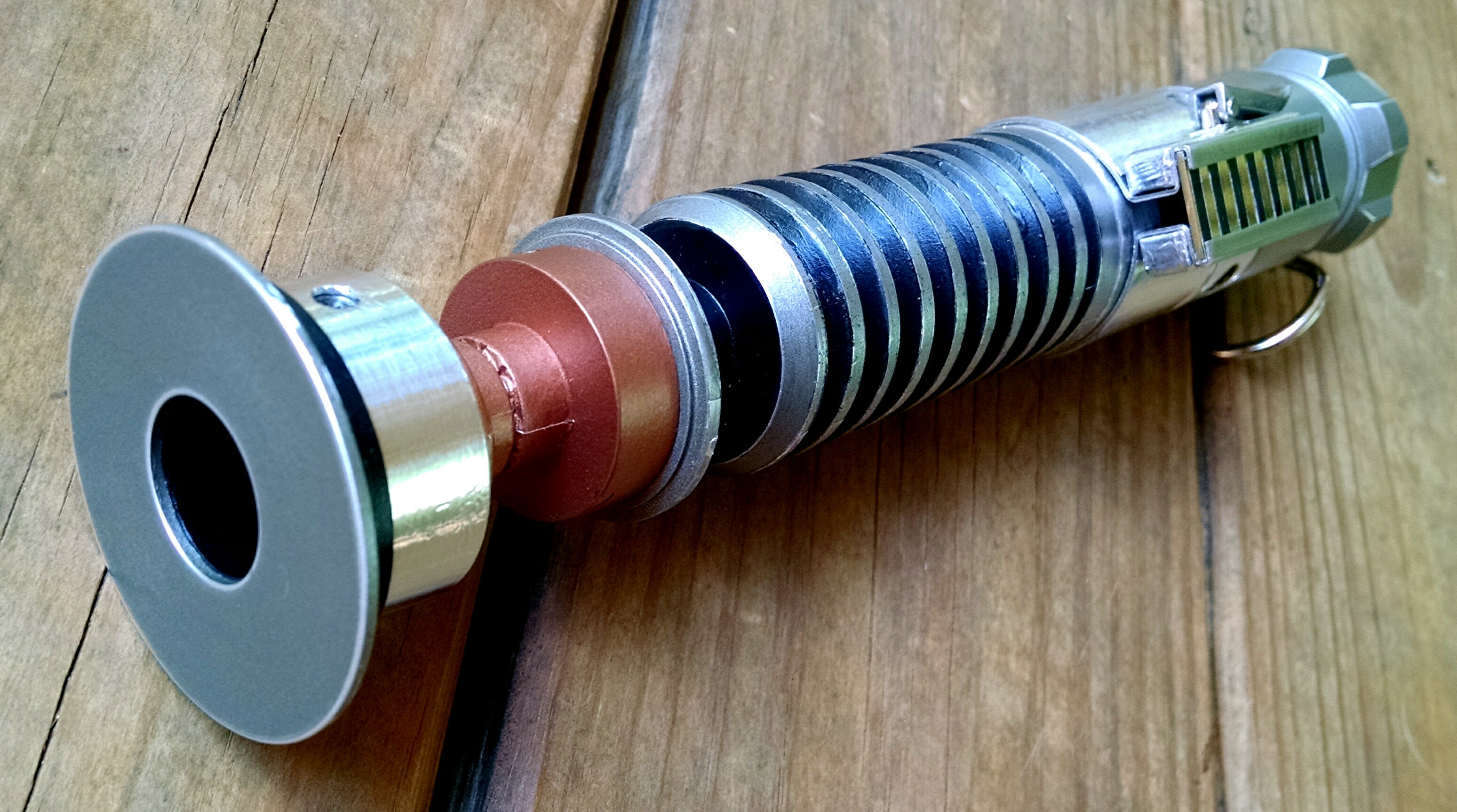 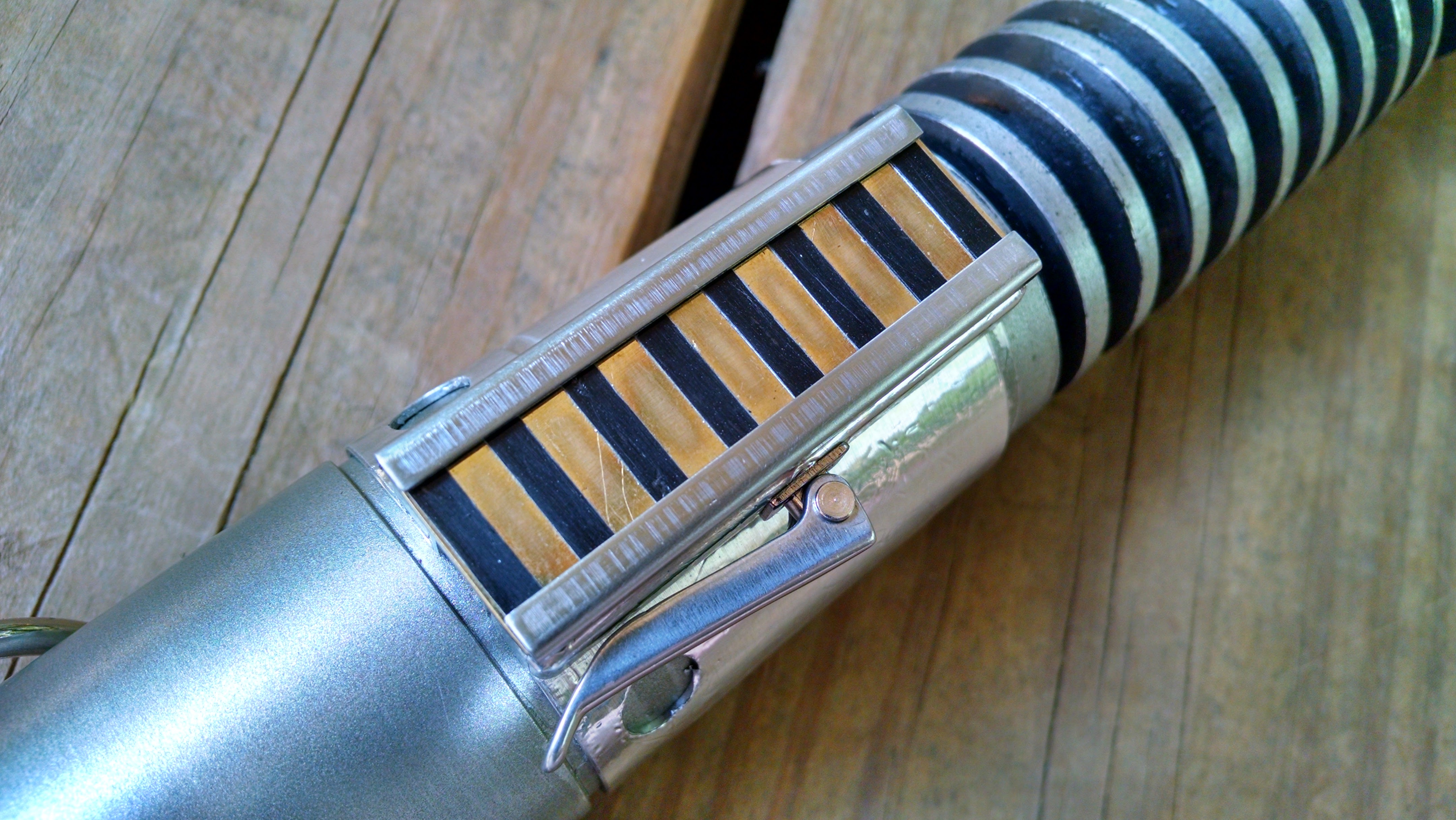 RPF PREMIUM MEMBER
nice! I would love to have that milled hole put on my hilt (using a korbanth ls6)

RPF PREMIUM MEMBER
Which hole are you talking about?

That's a killer V3 Dann! Did you use tape on the neck to get that effect that we see on the V3 as it is today? I haven't too many people try and capture that, and it looks great!

I found this image on here somewhere in a thread, and I don't think there's any denying it was just tape looking at this: 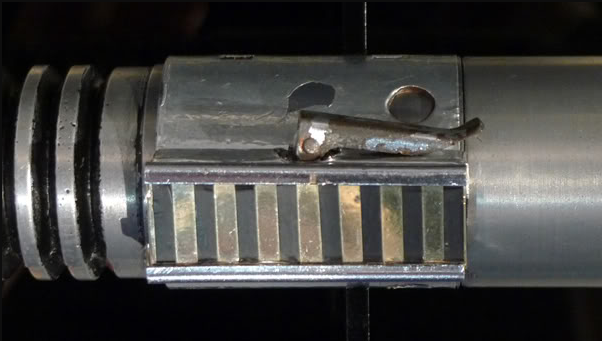 You can even see it peeling/wrinkling at the edges where it meets the clamp!

RPF PREMIUM MEMBER
Just looked through the library. Is there a clear shot of a brass edge for sure? Not saying there’s not... but rather that it’s hard to pinpoint the edge in the images

https://flic.kr/p/6PY8vw
^ if you click on this one, you can zoom in quite a bit and see one edge. There's no close ups unfortunately, but I can see the yellow edge in a few other images too. Also that library I linked is definitely out of date (I have another folder in my files that has more) so I'm actually going to update that right now


EDIT: Here's an updated google drive link if anyone is curious, there's a lot more now!
Edit 2: Obligatory Original Props Blog link (as some images are contained in the drive)
Last edited: Apr 11, 2020

LOM said:
https://flic.kr/p/6PY8vw
^ if you click on this one, you can zoom in quite a bit and see one edge. There's no close ups unfortunately, but I can see the yellow edge in a few other images too. Also that library I linked is definitely out of date (I have another folder in my files that has more) so I'm actually going to update that right now


EDIT: Here's an updated google drive link if anyone is curious, there's a lot more now!
Click to expand...

ive actually never seen this one before. what a shame! he's got a 3k version of it but he disabled downloads... I was able to screen cap some of them though... wish i could get that 3K one... 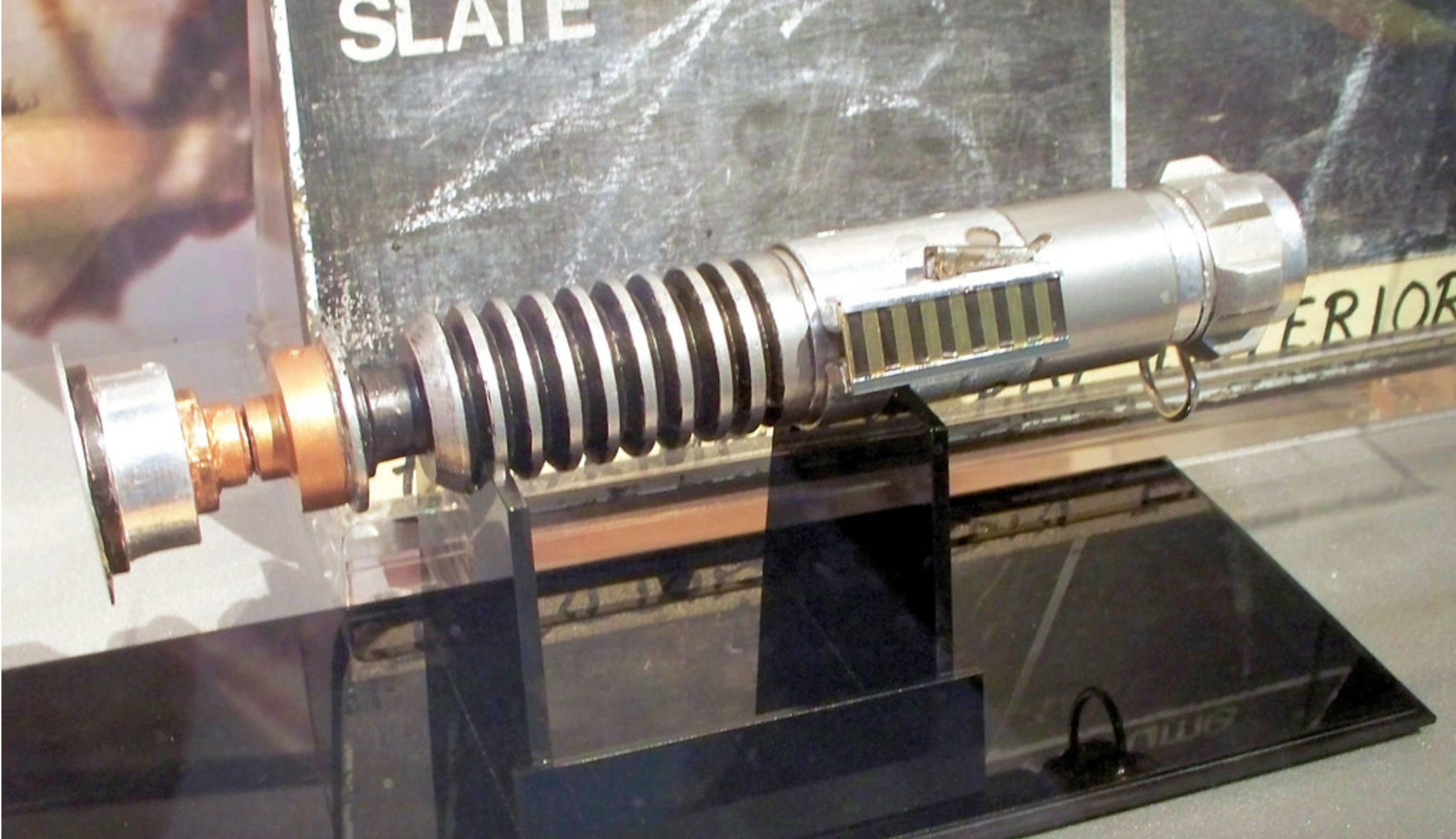 the next one you can really see how wonky the emitter is!! 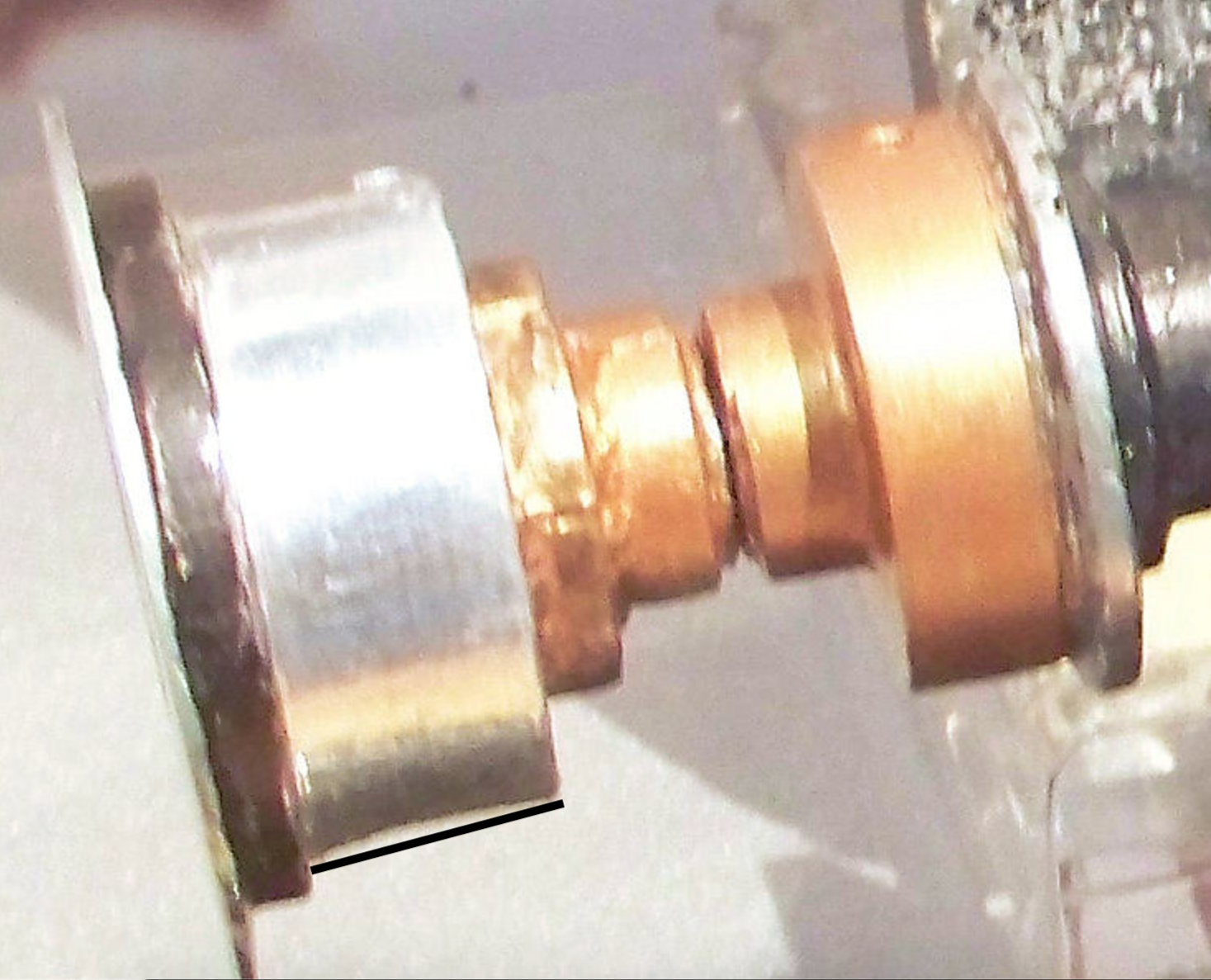 RPF PREMIUM MEMBER
where's Tom, with these pictures i think its safe to say there isn't at 3mm screws in the ring below the emitter plate (black ring)

im guessing that 5mm grub screw in the emitter has been there this whole time, just on the opposite side of all the photos we have... i find it incredible that all these photos and that grub screw is on the other side...