Was a pain in the butt and far too expensive.

So lets start with some research,

The fabric in the white robe was a booger to figure out if you're not a fabric expert. The large blobby things in the pattern (not the embroidery) are called "slubs". I looked high and low for days on the internet for this kind of fabric. Turns out it's upholstery fabric, but I was fortunate enough to find it on sale.

The Layout of the robes, tunic and pants were another matter all their own. After watching several "making of" Tron videos and the interview with the costume designer Christine Clark (https://www.youtube.com/watch?v=ko3IXU0BZ1A) gave me the hints I needed.

It turns out the clothes are all variations on Japanese clothing. The Robes are a long long version of a Happi coat with a custom collar. The tunic is a long version of a Kosode. The pants are flat front, baggy and it was easy to just use a PJ pattern
Last edited: Feb 7, 2015

The hood is based off of what appears to be a raincoat hood with some extra heavy duty interfacing sewn in to help it hold it's shape and stay open. The seams are the same and its just a bit deeper. I also think this hood buttons/velcro's onto the inside of the jacket since it covers up the EL on the inside back of the collar.

The paper patterns were based off of online versions I found in link to japanese clothing in the ultimate Tron thread here on the RPF.

Ahh the EL. For the mother of everything that you find Holy is this stuff spendy. The inverters were not much better and I really need to custom design a circuit to replace the pack I had to quickly wire up. FYI this costume was done start to finish in less than a month. I'll take far more time on version 2.0.

I had one strip from a friend who had perforated it with a sewing machine. This loosened up the laminated bits enough where I could cut it apart and re-attach copper tape electrodes (with conductive adhesive, buy it at Adafruit).

The inverter pack was necessary since each one could only drive a certain amount of square inches of EL tape. I had eight overall and they were HEAVY. All wire joints were soldered, heat shrunk and then wrapped in electrical tape. It was the incentive to avoid 230V zapping me which didn't happen since the EL tape itself was shocking me.

These are the wires in the robes and the wiring sections with square inches of panel to light. The round sleeves are run from one inverter capable of 50 sq/inches of El tape and the other inverters were limited to 100 Sq/inches. I think the values in the picture varied slightly but not enough to change inverter size or quantity.
Last edited: Feb 3, 2015

Motorcycle boots were another mess. They're still not done... I do have some black leather that I can use to overlay on the heels over the EL tape, just need to do it now. My boots are on the right. They were an eBay purchase for about $100. They are the closest thing I could find to what was used. These things are actually more comfortable than my normal shoes

The design on the back I attempted to do with fabric paint and a stencil. Next time I will embroider it, even if I have to do it by hand! I forgot to use contact paper the first time so I got to freehand xacto cut that all over again on the contact paper.

RPF PREMIUM MEMBER
This is awesome stuff. Thanks for sharing your build! Seems like not too many people have attempted this, much less succeeded. =)

Crimson490 said:
This is awesome stuff. Thanks for sharing your build! Seems like not too many people have attempted this, much less succeeded. =)
Click to expand...

Thanks, it has been challenging and far more expensive than I wanted it to be.

As for the design on the jacket I think I need to tweak it a little bit so it fits the v2.0 jacket I will also embroider it too since FABRIC PAINT IS STRAIGHT UP EVIL!!!
S

Wow, nice job! I am attempting this exact costume as well and have a few questions for you.


How are you attaching the lights to the costume?


What type of el tape did you use? split? parallel? or something else?


How good were your inverters and how are you powering all the inverters? regular batteries (9v, aa) or soemthing else?


How long could the lights be on before running out of power?


any other tips or gotchas?

s3bash said:
Wow, nice job! I am attempting this exact costume as well and have a few questions for you.
Click to expand...


s3bash said:
How are you attaching the lights to the costume?
Click to expand...

Double face tape and the inside of the jacket has clear 8 gauge Vinyl sewn in where the EL tape goes. This way they are removable/replaceable. The robes have super sized button holes sewn in to hide the electrodes where they meetup or butt together.


s3bash said:
What type of el tape did you use? split? parallel? or something else?
Click to expand...

I got them from a friend who got them from China. The electrodes are both on the back so I think they are parallel since there isn't a "scribe line" on the front. Not 100% sure on this one.


s3bash said:
How good were your inverters and how are you powering all the inverters? regular batteries (9v, aa) or something else?
Click to expand...

EL Inverters are from lighttape.com and they are top notch but are way over priced I'm looking to sell them at some point. I'm thinking of making a custom circuit to replace them though since the inverter pack is pretty heavy and quite large. I was using some rechargeable 12V battery packs from China and they are crap. I'm in the process of returning them.


s3bash said:
How long could the lights be on before running out of power?
Click to expand...

They were drawing 1.62 Amps @ 12V so you can do the math to size it to your battery pack. Mine ran about a half hour because of the defective battery packs.

s3bash said:
any other tips or gotchas?
Click to expand...

Get a high discharge quality battery.
Account for the thickness of the disc holder when it pokes though the robe fabric. I get to redo mine since I can't get the disc to stick to it
Last edited: Feb 5, 2015

This is the disc holder. I used the packaging to create a mold and then cast it with resin. I used OOMOO silicon by Smooth On. One thing I failed to take into account is the thickness of the fabric. By the time I had inserted it into the hole in the back, held on with velcro (which works beautifully FYI) I realized it didn't stick proud of the fabric and even with a few extra magnets it isn't enough to keep the disc on. So this part is a redo.

I tried to rotocast the tinted resin a bit by swirling it around as it dried. I did this in several coats and then inserted some EVA foam fillers so I didn't need to use as much resin and thus save on materials and weight.

Cut out the disc holder's design pattern for a contact paper stencil.

Turned out pretty nice. I just sprayed on a gloss acrylic clear coat to make the design.

Here's a side by side comparison with the rooms lights on/off in my office. EL lamps are on in both pictures. Well, I just realized I can take a few strips off! I don't need some of the inside ones now. This is why I'm glad I stuck them on with double face tape. I've redone the disc holder for Kevin Flynn as well as the inverter electronics. Previously I had tried to make a cast of the toy packaging. This holder still needs some dimensional work since the top needs to be flush with the inside of the identity disc.
https://www.youtube.com/watch?v=NrIbZIrIOdU

The electronics are from Shenzhen Pengyulong Technology in China and model HY-DC3000. It's a 12V inverter capable of running all of the EL tape by itself and FIT IN THE DISC HOLDER (with a little surgery). It makes some whine but I can live with it.

And this is why I love The Replica Prop Forum! I made a Tron Identity disc holder for a member and he responded back a few days ago saying he found the EXACT boots used in the movie. I looked for weeks and couldn't find them.

Also I redid the EL tape. I bout this stuff direct from China as one roll (previous post) but I found out a great lesson in splicing SPLIT EL tape. Splicing parallel electrode EL tape is much harder. I used conductive copper foil tape and used a dremel to grind off the plastic that seals in the EL tape. I had to do this to expose the electrodes on the back. I found that touching the adhesive on the back of the tape made it fail faster so use rubber gloves. Also made sure you don't grind all the way through the electrode.

This is how I terminate the EL tape. One-third is stuck down the other 2/3rds are folded over onto each other to make a tab. I tried to solder directly to the electode but it burned the light side, so don't do it that way.

This is a right angle splice. The top splice actually failed, it kept peeling away. So... I used two pieces that met in the middle so that if you look at it from the side it's an upside down "T". This acted as a strain relief. Be sure to burnish down the sticky side so it is well adhered to the electrode.

And this is what it looks like in the dark now, much brighter and it draws significantly less power than parallel electrode EL. It's also a lot whiter than the other stuff that had a blue tint to it.

Next up I plan to redo the identity disc, probably design and model it in 3D and print it out so it's more suitable than the toy I have now.

Here is the same picture as above but with the new El tape. Brighter and whiter. 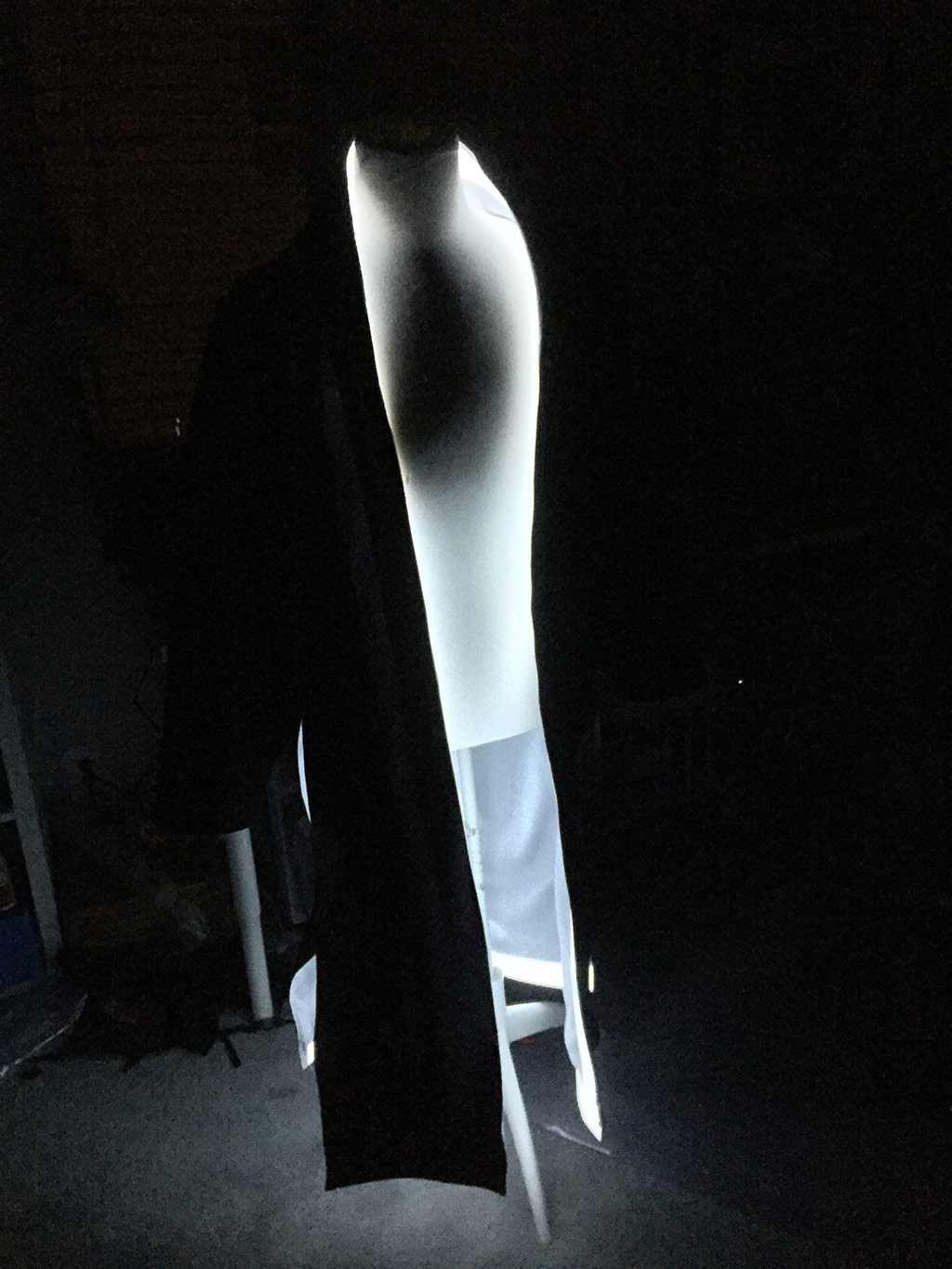 I wound up using EL tape from luminousfilm.com for my flashback Kevin Flynn motorcycle jacket. The white tape gives a true white light and they have a variety of good inverters too.

I wound up using EL tape from luminousfilm.com for my flashback Kevin Flynn motorcycle jacket. The white tape gives a true white light and they have a variety of good inverters too.
Click to expand...

Thanks and added to that thread. My new EL tape is very white, much whiter than the first parallel electrode stuff (white-blue/green) and much easier to splice and make corners with hardley any wires now. For this much EL tape and with ONE inverter the Chinese model couldn't be beat. I looked for quite a while too

Finally got some photos from a photographer who sought out Tron cosplayers. It was difficult to shoot because of how dark it had to be to pick up the glow from the EL tape. I'm totally thrilled with his work and they turned out great.

Yesterday at 7:46 AM
Snow Builder

Yesterday at 6:47 AM
Captain April