RPF PREMIUM MEMBER
Finally finished my Han Solo ESB. The jacket's being replaced with a more correct charcoal grey as I type this.

RPF PREMIUM MEMBER
wicked cool! where did u get the jacket, i have wanted one for years!

Looks fantastic what kind of existing pants did you use . . . or were they custom made? I received some yellow stripes yesterday, which in the seller's pictures looked close to my vintage brown levi's jeans . . . not . . . so I doubt I'll ever find the same color brown on an existing pants ... another lesson learned when purchasing parts ... ask for no-flash pictures and shot item in day-light :wacko

RPF PREMIUM MEMBER
Heya Halliwa an Sym-Cha! Appreciate the comments. All soft parts on my costume are courtesy of Magnoli Clothiers (http://www.magnoliclothiers.com/). He makes some good quality gear, no doubt!

I am putting together a Han ESB currently as well, and also commissioned my soft parts from Magnoli Clothiers. Magnoli's work is fantastic, and fits like a dream. I highly recommend his products!

However, I'm having the opposite problem with the color of the jacket. I ordered mine in charcoal, but the color is lighter than I was hoping for. Next to the pants, the pants are the darker of the two.

I'm planning to attempt to dye the jacket a darker charcoal color, and I'd like to add a subtle blue tint. Indy recommended a single packet of Rit black with a half packet of navy blue (not quite enough as is recommended for a garment this size), and not leaving it in the dye for too long. Any recommendations from folks with dye experience would be appreciated.

RPF PREMIUM MEMBER
I ordered charcoal grey as well. Not sure how light it will be, but it's got to be more accurate than the black jacket I accidentally received instead.

RPF PREMIUM MEMBER
I'm very curious to see if you get the same charcoal that I got, or if Indy might have chosen a different fabric. I'm almost on the fence about the color, as it looks pretty good on it's own, in low lighting conditions, but feels much too light in daylight conditions. It grew on me a bit, right up until I received the shirt and pants, and noted how much lighter the jacket is compared to the pants.

The black jacket doesn't look bad to me at all, perhaps because it matches the ROTJ colors. I just know there is a median point between your black jacket and my lighter charcoal grey jacket that would be absolutely perfect. Kudos for choosing to go for a more accurate color, rather than the blue that many seem to prefer.

I'm watching a lot of YouTube videos, and reading tutorials on the fabric dyeing process, hoping I don't mess up this wonderfully crafted garment.

RPF PREMIUM MEMBER
Here's a picture of what is purportedly the original screen-used jacket taken with flash indoors, I think. It's pretty light! 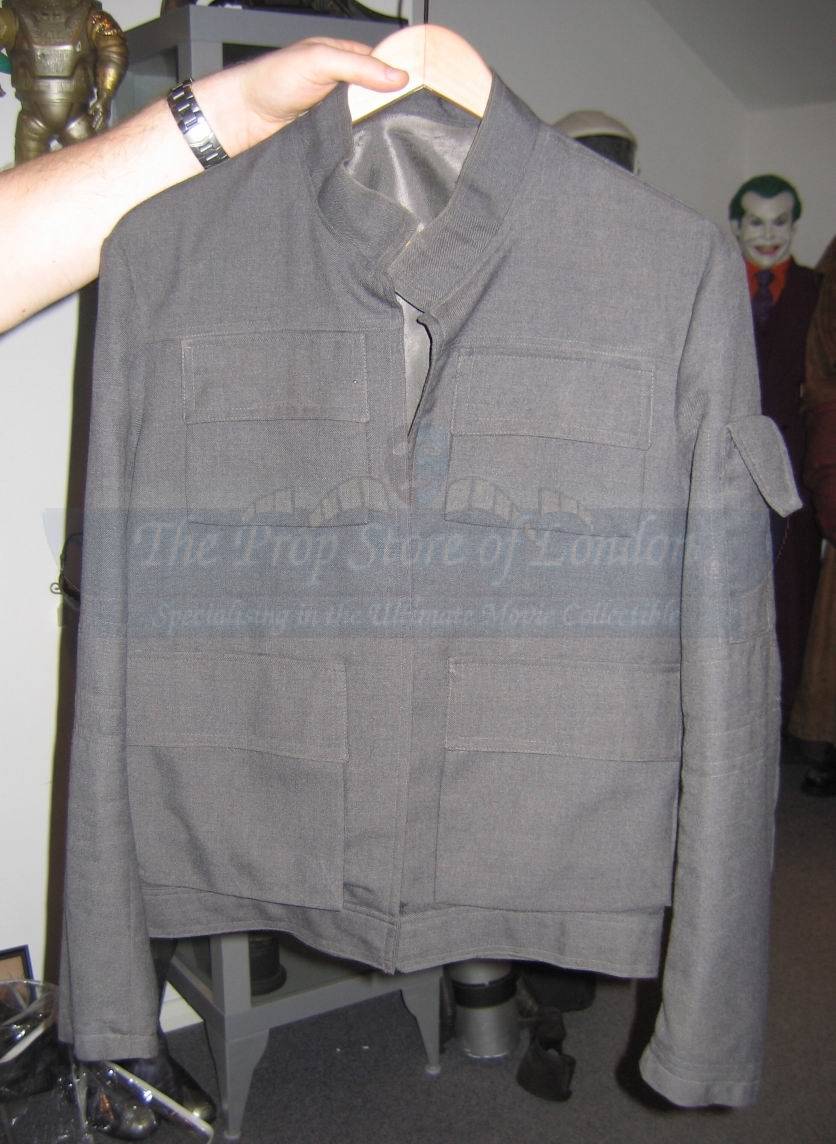 RPF PREMIUM MEMBER
Flippin' fantastic. What belt is on the trousers? Any chance of some detailed pics? Magnoli's sites photos are out of date.

RPF PREMIUM MEMBER
Here are some pictures of my Magnoli pieces in various lighting conditions.

Outdoors in the shade:

As you can see, you get quite a range of looks depending on the lighting.

Here are a couple of comparisons I whipped up, of the closeup pic(color completely desaturated) next to black and white production photos:

The charcoal color from Magnoli looks pretty close to that Prop Store photo.

Perhaps I am reacting to the value difference between the jacket and pants. Maybe the pants are a little dark? What do you guys think?

gman71- What fabric color did you opt for on the shirt? I went with ivory.

RPF PREMIUM MEMBER
thanks for the pics! to be honest, i think the photo of the screen used jacket is really blown out. this photo from celebration looks far darker and more charcoal/blue

RPF PREMIUM MEMBER
Thanks for that link, Egon. There is a closeup shot there too, where it looks lighter:

I threw together a couple of unaltered side-by-sides with those pictures, and the results are interesting:

RPF PREMIUM MEMBER
I think I will refrain from any attempts at dyeing my jacket. At this point, the difference I am looking for would be so subtle that I would be afraid to try and end up going too dark.

What boots are those, gman71? They look great!

I was tempted to go for the made-to-measure boots Magnoli is offering (and may still, later), but opted for a pair from Todd's Costumes. They are very nice 100% cow hide boots, although they need modifcation. My size 12s fit very well, with the exception of the top of the calves. I can squeeze into them easy enough, but they are tighter than I would like, and nearly impossible to get off without another person to help. Hopefully they will stretch a little bit when they have been worn more. Even 1/4 inch would do the trick.

So far, I've been to 2 local cobblers, looking to have the tops cut off straight, re-sewn, and stretched, but have had zero luck with either. The first said he didn't have the tools for boots that size, and sent me to the second. The second specializes in leather, but couldn't be bothered to cut and re-stitch the tops, and he claimed to be unable to stretch the boots after keeping them for a week. He said they have some kind of plastic coating that was preventing the stretch, but I'm not sure I believe him. Has anybody else here modified these?

RPF PREMIUM MEMBER
SpyderDan, those are Todd's Costume boots. I like 'em. They're comfy, though really snug getting your foot into.

gman71 said:
SpyderDan, those are Todd's Costume boots. I like 'em. They're comfy, though really snug getting your foot into.
Click to expand...

Did you skip cutting the tops straight? If so, I can't really tell from your pictures. They look great on you.

I cut mine today myself, and it was much cleaner than I expected. I'm not even worried about re-stitching the top. The lining is well adhered to the boots all around.

I sure can't seem to get into them today, though, wearing boot socks. I'm supposed to wear the costume to an event tomorrow night, so I am currently trying the desperate act of putting them in the freezer, stuffed with newspaper, and heavy-duty freezer bags full of water in the calves, after soaking the inside of the calves with boot stretch. If this doesn't work, I may have to try something last-ditch tomorrow.

I think I am totally going to order a made-to-measure pair from Magnoli at this point.

RPF PREMIUM MEMBER
Any updates on your jacket?

Also, I went out for the first time in my han gear, and I just want to warn you about Todd's buckles. You may wanna file them down and soften the front and back buckles a bit so they don't wear the pants too much. I already have some wear marks on my pants.

Your magnoli pants are terrific and I'd hate if you trooped and already started to wear them out!
G

May I ask which jacket colour you have in the most recent picutre? Also I'd like to know how you think about this jacket after having it for a few years. Im considering buying one myself!