I'm going into familiar territory again and this time, I'd like to commission an experienced computer modeller to produce a 3d model of the Flash Gordon Hawkman Rocket Cycle from the 1980 movie - scaled to fit the 3.75 inch tall Flash figure that Bif Bang Pow produced a few years ago (same size as the original Kenner Star Wars figures).

I was lucky to get some VERY rare, behind the scenes photos of the prop that they built for the movie which would be invaluable in producing an accurate model.

I've got the Sketch-up model that Stevestarkiller did for my larger version of the model (to fit the 7 inch tall Alex Ross designed Flash figures). There are many innacuracies in the geometry, proportions and panel placement on this sketch-up model but at the time, it was the best we could do with only a handful of photos from books and DVD screengrabs.

My good friend Martin-El now owns one of the models that were produced by Pete_SSS in 2011 when I commissioned him to build the physical model using the plans, elevations and cross sections that Stevestarkiller provided from the sketch-up model.Martin was kind enough to let me go and shoot 360 degree walk around photos of the model so I could import them into "Meshroom" Photogrammetry software.

I exported Stevestarkiller's sketch-up model as a .obj file but because that model was never created with 3d printing in mind as the output, the result is unusable too.

So, I'm back to where I started in 2011. Looking to commission someone to produce a new model that can be exported for 3d printing.

Here's the results of the photogrammetry imported into the "Meshroom" software. As you can see, it was an unusable result.

RPF PREMIUM MEMBER
Here is an overlay showing the side elevation from Stevestarkiller's sketch-up model and the best side view reference photo that I've got of the actual prop. I scaled the photos based on the overall height from the bottom of the boat shaped hull to the top of the control console. As you can see, the panel placement around the skirt are out significantly. As is the position and number of the ribbed bumper strips on the corners. The rear of the hull should be flattened more and the front part of the hull and sloping parts that the control colum attaches to needs to be pulled forward more.

Thats cool. I use Sketchup exclusively in my model work and have been making scale models (old school) for 20+ years.
Any chance the SKP model is still available? I could use that to produce 3d printable parts in STL format if so. Since you said it was not as accurate as you would like, what sort of changes need to be made?
Id be interested in taking a look if you want. No idea what your budget is, but i charge $20/ hour USD for design time. Could probably bring this in for less than $100 if there is not too much that needs changing or adding. Let me know if interested.
C

RPF PREMIUM MEMBER
Thanks for your reply. I sent you a conversation message.
Yes, I've got the sketch-up model that was made before. However, as I mentioned, it really needs to be done from scratch because there are too many errors in the proportions, geometry, details, rivet locations and panel placements. Also, it wasn't modelled in sketch-up with 3d printing in mind, so the resulting exported .obj is unusable.
It could be used for guidance, but I think that a new model would need to be created using the excellent photos that I've got of the original prop that they made for the movie.
I'm happy to pay for this to be done so shoot me a message or email:

RPF PREMIUM MEMBER
Here's the disappointing result of the .obj exported from the Meshroom Photogrammetry software. Looks like the rocket cycle after it must have crashed onto Arboria when it ran out of fuel. LOL.

RPF PREMIUM MEMBER
With a HUGE thanks to bigpetr, my wish to have a Kenner sized Rocket Cycle model is becoming a reality.
bigpetr has done an INCREDIBLE job of matching up the geometry and proportions of the full size prop and we have reached the stage where the basic shapes are completed, so now the detailing can begin. Working with bigpetr has been fantastic. He is extremely patient, very detail oriented and tries his absolute best to figure out all the tricky details to ensure that the model matches up to multiple photos of the prop. He had to start it from scratch because the older sketch-up model that I had commissioned had errors in almost every part (although it was the best we could do with the limited reference material that was available at the time).

I also took lots of photos of the 3.75 inch tall action figure (in flight pose) and sent them to bigpetr so he could use Photogrammetry to create a 3d model of the figure to import into the rocket cycle computer model so we can get the scale correct. The Photogrammetry didn't work too well, but bigpetr was able to get enough of it to give us the info that we need for the scale. (You can see partially formed, photogrammetry Flash in the montage of photos here).

I was playing around with some designs for the box art that I want to produce for the model and have used the Bif Bang Pow 2-pack box design as the starting point (since they produced the figure that will be used with the model). I've then updated it with the logo that was used on all the UK marketing for the movie at the time and tried to recreate the style that PALITOY used on their Star Wars toy boxes as that is something I always dreamed of seeing on the shelves in UK toy shops when I was growing up. I think I will use a window box for the front (instead of the classic PALITOY/ Kenner photo) although I am tempted to shoot a photo of the model with Flash and Vultan figures to make a variation of the box to put on the shelf. LOL.

RPF PREMIUM MEMBER
Here's a comparison between the first computer model done in 2011 and the WIP version of the 2019 version which has had the benefit of being photo-matched and also scaled accurately thanks to some collectors providing precise measurements and photos of the blaster props that were used to create the gun on the front of the rocket cycle center console.

RPF PREMIUM MEMBER
Some brilliant progress now. Not long until all the plates and rivets will be on. Very exciting!

RPF PREMIUM MEMBER
Just playing around with ideas for the box design while I wait for the next updated photos of the model. 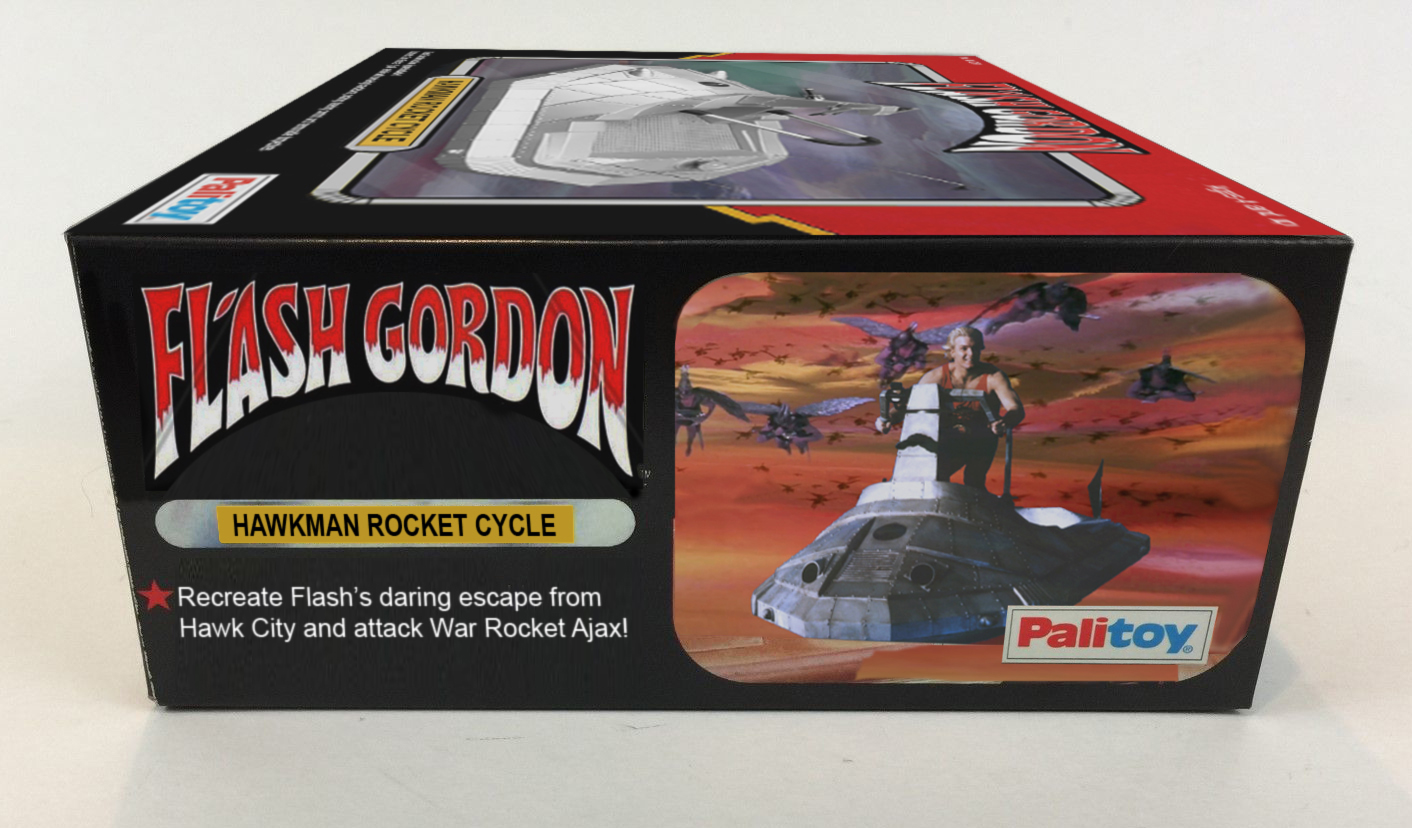 RPF PREMIUM MEMBER
Here's the first 3D printed prototype. This was done on an FDM printer and has low quality surface details. It was a test print to check the scale etc.
The final version is being printed in resin on an SLA printer.
Great to finally hold this in my hands and put Flash on there!
My box has also been printed and assembled. Good times!

RPF PREMIUM MEMBER
More updates if anyone is interested.

RPF PREMIUM MEMBER
Wow this is really cool! It's truly amazing what can be brought to life with 3d printing. The detail work is great and overall such a clean model/print. I loved instructions and boxes like this as a kid ( well still do)
C

RPF PREMIUM MEMBER
So happy! I tried lots of different variations for the box artwork before deciding on these. Having them properly printed and assembled is a real joy and finally satisfies that longing I've had to see Flash Gordon figures and vehicles in Palitoy / Kenner packaging style.