1 of them is the correct version but it had some parts that fell off in shipping. It's the one on the right. The parts are at the bottom of the pictures.

The other one on the left has an incorrect side door. It slides rather than hinges.

Does anyone know if it's possible to take the faceplate off the wrong one and put it on the correct (but broken) or maybe just replace the battery door area on the wrong one?

Are you using it to make the macros or doing a restoration job on them?

If you're making the macros, leave those parts off. That whole black plastic box comes off for the conversion.

If you're doing a resto, the metal plate is just held on with glue and the button was a press fit, IIRC. I believe the washers just sat underneath the button.

Hope that helps some,
Fred

Thanks, I didn't know that.

I wanted to make some Macros, but I know I'll never get to it.

I wanted to have one really nice one to keep or trade or something.

Do you know if there is a Macros tutorial anywhere?

Lenses are Kaligar f2.8 80mm from a Kalimar six sixty (there was one for sale in JY a couple of days ago)

The viewing hood and various knobs is also supplied by the six sixty.

The lense mounting plate was never discovered but nicely replicated by RussRep.

The little bubble plate was used to cover the eumig name plate on the top. Most people use the black box as the right side greeblie that is never seen anywhere.

Look up OdiWan72's recent post where he shows his recently built macros. You can get a pretty good idea of what goes where, but I have no idea how things attach. I'd be more than happy to work with you on this as I am also in the middle of building one. I have all the pieces, just no clue as how things go together.

Originally posted by Gigatron@Jan 21 2006, 04:03 AM
If you're making the macros, leave those parts off.Â  That whole black plastic box comes off for the conversion.Â

I've seen at least one that left the black box on. It all depends how you convert it.
Our reference of the prop isn't detailed enough to say for certain how the conversion should be done.

Regardless of the black box I'm guessing you still want to replace the banged up faceplate. I'm sure you could transplant the parts, but I haven't taken mine apart yet so I couldn't tell you how to do it.

Thanks for the comments.

The correct one is a little more beat up. I think tomorrow I will try to take these apart and see what makes them tick.

If I can replace the battery lid, then I'll have a real nice looking one.

RPF PREMIUM MEMBER
Hey FB...swapping out the front is no big deal.

Open the door, where the film-spool sits in.
Now you can see a chromed L-shaped piece of metal, that is screwed to the back of the compartment.
YouÂ´ll find two screws in the left and two in the right corner, the LOWER ones hold the frontplate in place.
To get access to the lower right screw, you have to remove the silver "drum" first.

Thanks for the help.

I just fixed it and took some pics just in case anyone else needs to do it. The cameras are identicle except for the battery door. The only tricky part was getting the back loose. It sticks a little and you just have to work it slowly apart.

2) The camera opened. I circled the 4 screws you have to take out so the back panel will come off. (the 2 screws on the right are longer)

3) Back panel taken off. There are 2 wires that are attached to the black plastic part. I broke one while taking the panel off. It solders back on real easy though. I circled the holes the screws go through on the body in green.

4) Both Camera backs taken off.

5) The end result. A cleaned up correct Eumig..

I thought the same thing.. I think they remind me of Howards awesome creations with the little brass gears.

RPF PREMIUM MEMBER
Here's a rundown on how to remove the lens and other various junk parts:

1) Remove this metal bracket (the screws are already gone in this pic). 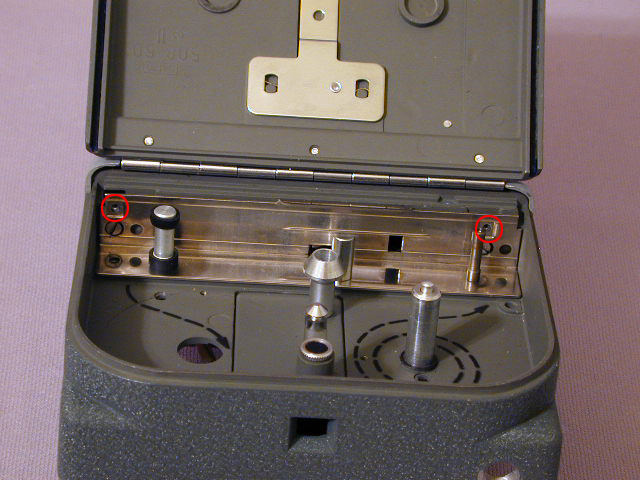 2) These two screws hold the front plate on. Remove them. 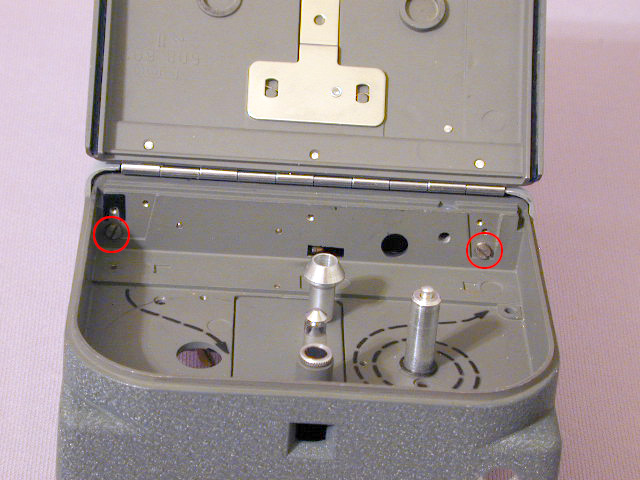 3) To remove the front plastic cover, first remove the little dial thingie and pop
the cover plate off. Then remove two screws. 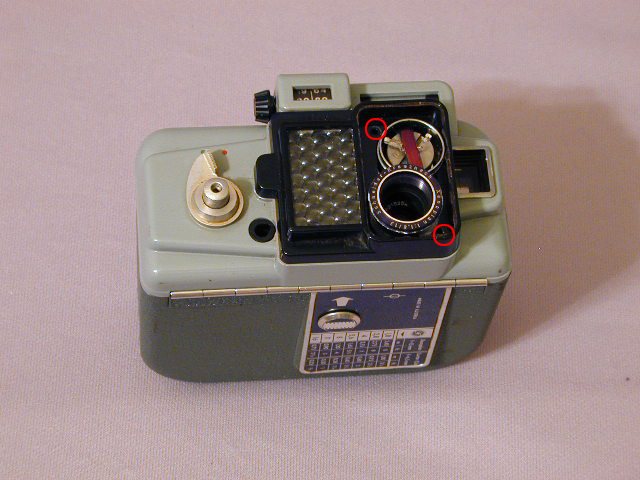 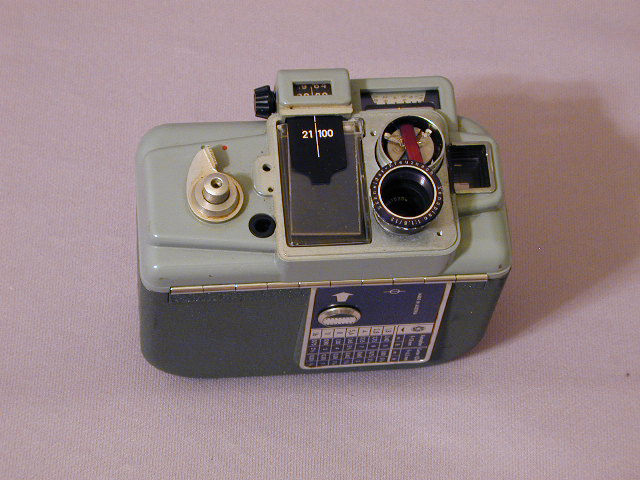 5) Take the front plate off and remove the screw and plastic cover
at the top. 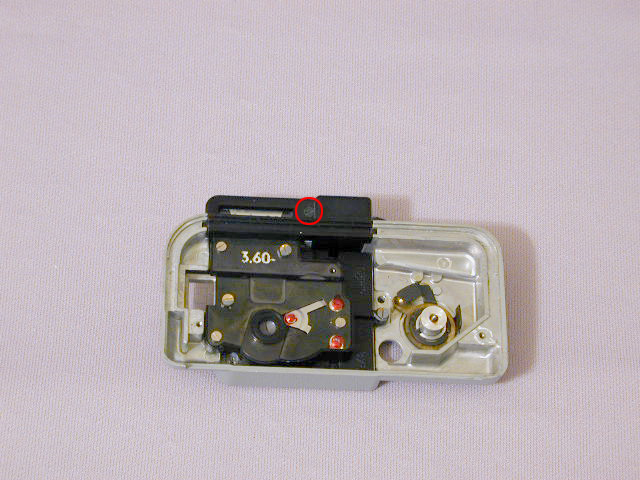 6) Unscrew three screws to remove the lens assembly. There
is a cover plate that I removed before this step, btw. 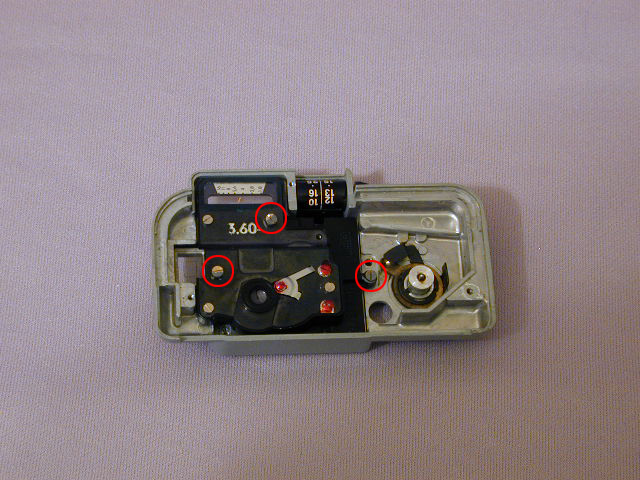 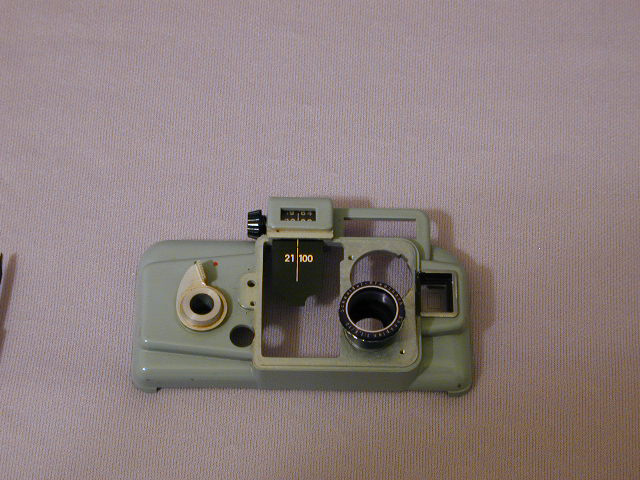 8) With a pair of vice-grips, pull the lens housing out. 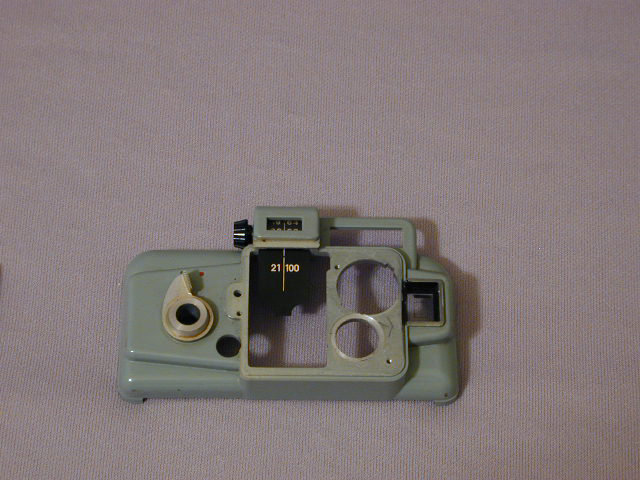 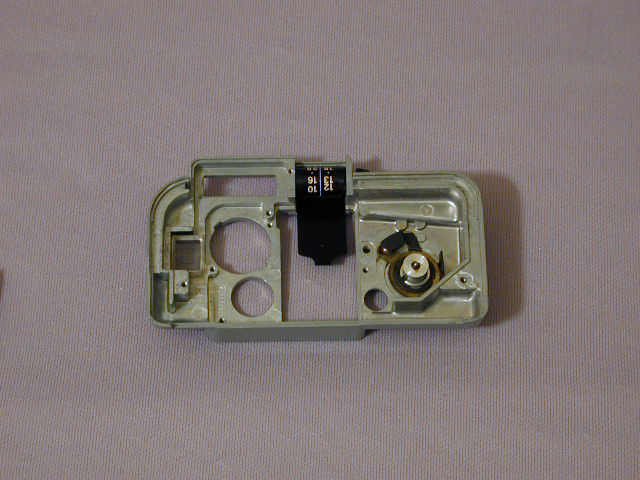 10) Unscrew most of the screws here to get that junk out. 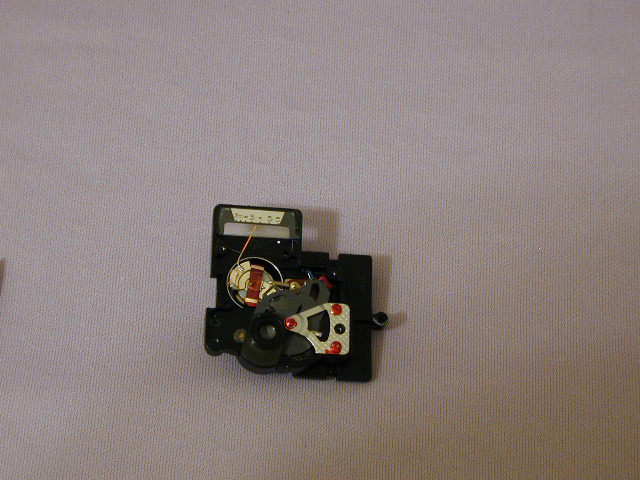 11) I liked the needle showing on mine, so I cut it off this piece.
There is a little wire on the lens housing that I was able to slide it
under so that it would stay in place. 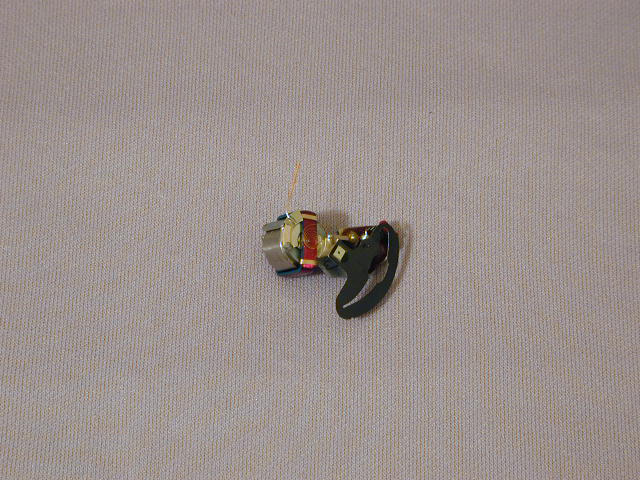 12) For this metal piece, again, use the vice-grips to pull it out. It was
pretty tough to remove, but it will eventually give. 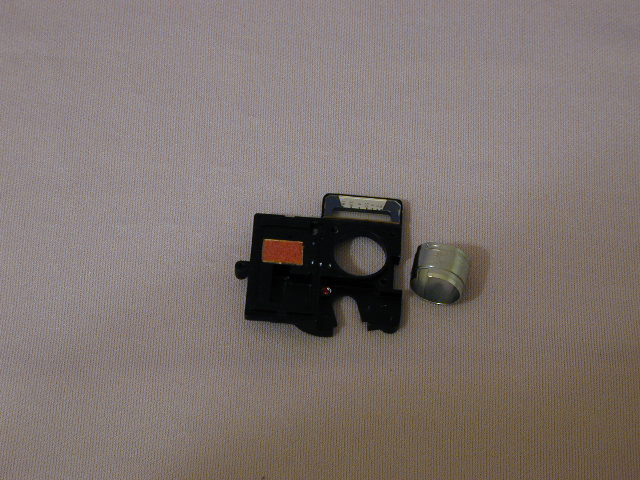 13) For the bubble plastic plate removal, flip the plastic housing over. Use a small,
flat-head screwdriver to pry the first layer of black honeycomb off. The other
layer as well as the clear part will now fall out. 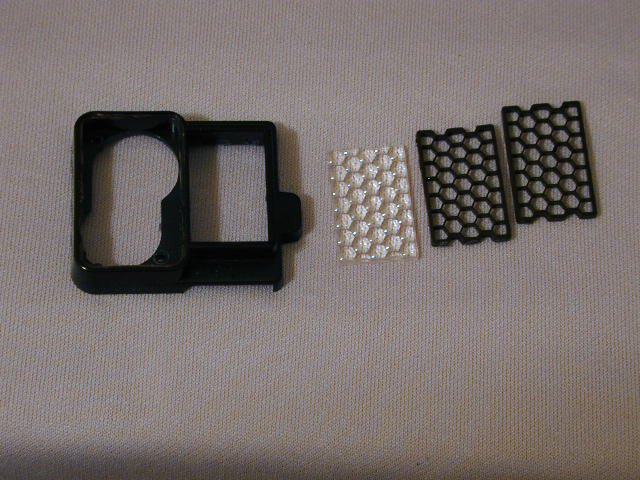 And that's that. I now have to worry about drilling holes in this metal body for attachment of the various macrobinocular pieces. I cannabalized a replica that I have and will be using the pieces from that.

I also have to figure out how to remove the glue residue from the black circular piece on top. Any ideas?

Great Pics. This will come in handy..

RPF PREMIUM MEMBER
Finally finished my macros. I still have to shove a picture inside the viewer to simulate the display. I started out with a almost 100% replica that I got off of ebay. I'm sure someone here made it. All resin repro parts and the viewer was real, but the wrong color. Hey, what did I know? :confused

So after taking apart my real eumig above, drilled holes in it for the viewer, adjustment knob, belt plate, and lens plate.

It came with no labels, so I had to snap the bubble plate off the repro and peel the label off of it to transplant over to the real eumig. The glue on the old bubble plate took some of the label's writing with it, so I had to touch it up with a permenant marker. I cut a piece of styrene to put under the label so that it would be flush with the top. I then glued the bubble plate on with a few drops of superglue around the edges.

The little round plate next to it had a lot of rust and glue residue on it, so I had to pop it out of the eumig. This broke the two little plastic pins, but no worries, these can be glued back on later. I gently scraped all the residue off with an exacto knife and sanded the entire plate with a fine grit sandpaper. I then glued the little plastic pins back on and sprayed it with a satin black paint. It was then glued to the eumig.

The two little kalimar knobs on the side were securely glued to the repro, so I had to dremel them off. It was like excavating fossil bones. I had to be very careful because one slip of the dremel could destroy them. Once they were removed and cleaned, I superglued them to the real eumig.

The repro lenses had some clear lens material in them, but one was really crazed and did not look right, so I popped the end caps off and replaced the clear lens with 35mm Wiggle Eyes that were slightly trimmed down with scissors. I found mine in the doll section of Michael's. Thanks to gw2tulsa for this tip.

The lettering was painted by applying White Apple Barrel craft paint and then wiping with a damp paper towel. Make sure the paper towel is pretty damp, but not dripping. Wipe in one direction in one movement first and then in which ever direction that will clean up the paint the best. If the paint doesn't fill the lettering completely the first time, let it dry and then re-apply.

All the numbers and lines were painted in similiar fashion with yellow, black, red, and a special lime green color that I had to mix up specially for this project. Everything was then sealed by spraying with a clear satin from the airbrush.

Too bad the viewer is the wrong color. I suppose I could paint it, but that's probably more work than I want to put into it. 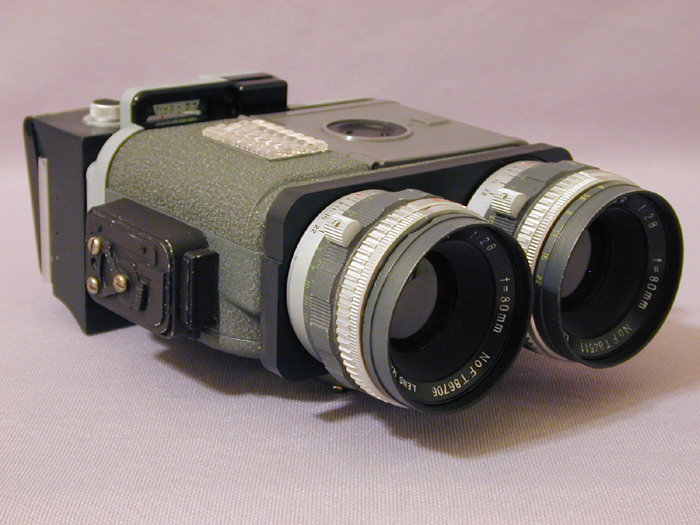 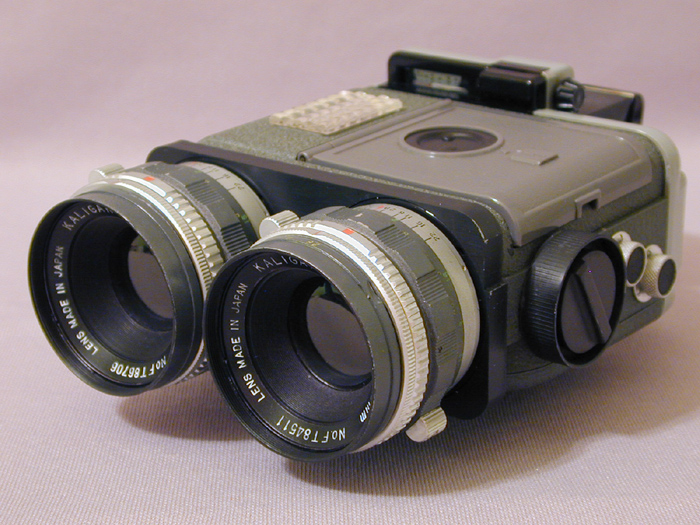 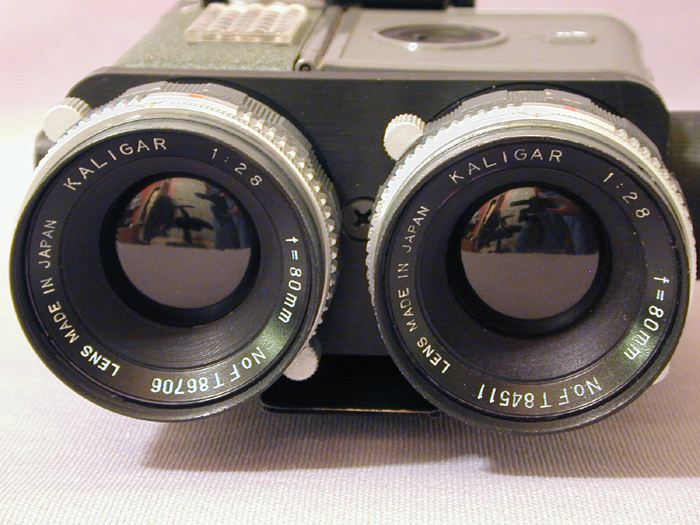 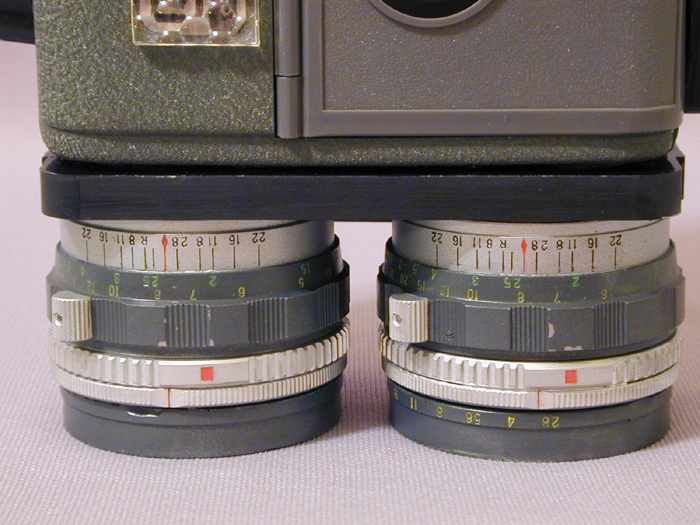 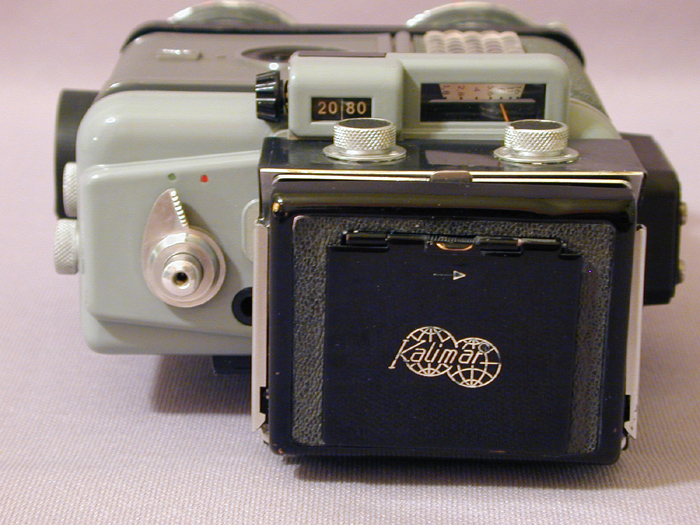 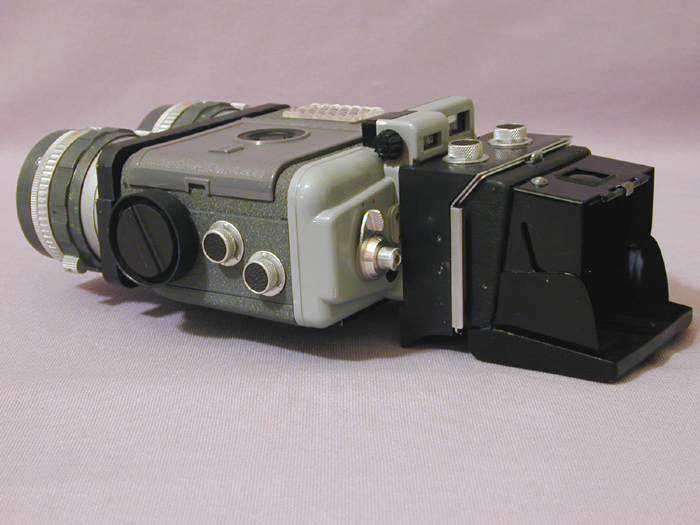 RPF PREMIUM MEMBER
Thanks. This is my first prop where I actually had to get my hands dirty. :lol

I wish I had the time to finish mine. :cry

Clutch, I don't know what you were worried about - those came out great :thumbsup

Michael Myers mask suffering from alopecia - how can I fix this?