I'm finally making some good headway on my DL-21 variant!


Original DL-21, as seen in ESB with Rebel troops on Hoth and also Dengar's sidearm, (with link to Wookieepedia article) for reference: 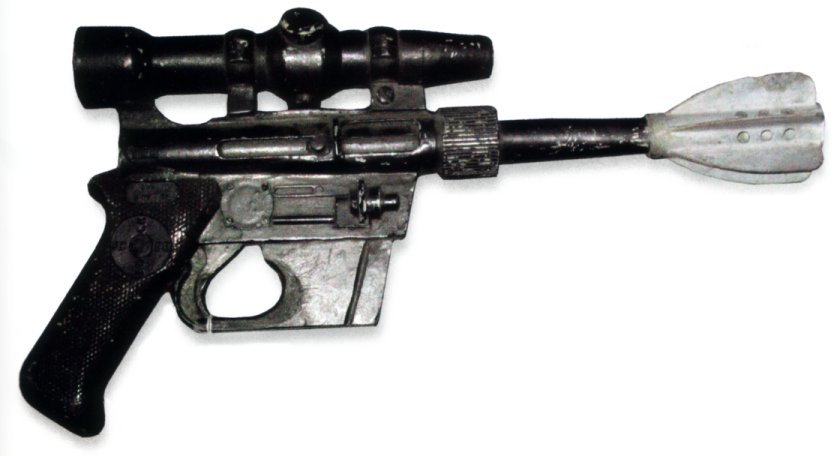 Instead, I'm starting with a Charter Arms Explorer II, a pistol version of the AR-7 survival rifle from which the DL-21 was based. Obviously, the grip is quite different, as is the back part of the receiver, and also the rear sight. Hence, why it's a 'variant' - it's gonna have some differences. Personally, I think the grip looks similar to the Bolo Broomhandle Mauser.

ArmaLite AR-7 Explorer (with link to Wikipedia article) for reference:

Today, I went to the shop, not for work, but to play!

I recently got my hands on a couple mortar fin assemblies: original WWII-era British 2 inch (50mm) mortar fins, which someone turned into a petrol lighter (I think this is what they call Trench Art): ...which I'm saving for a screen accurate DL-21 build.

The other is a modern US 81mm mortar fin assembly: Compared to the 50mm fins, they were far too big! So, I drew some lines, did some cutting on the band-saw, then put it to spinning and started cleaning it up. (Sorry, in advance, for the crappy cell phone pics.) I turned down the front half of my barrel and threaded it to the same pitch as the fins. There's a small, brass washer behind the fins (barely visible in the poor-quality phone pic). Also shown in the pic is a Webley 4x15 scope. I also have a bronze bushing that will soon be tapped to thread onto the barrel and turned down to an attractive emitter. Also on the agenda: scope mount rail.

even if I´d swap the scope for a SP or a generic, but SHORTER one.
The long 4x15 seems a bit out of place IMHO

I like it! I was never aware there was a pistol version. Everyone said it was a cut down rifle. So which is correct for the movie version?

I'd love to get my hands on a couple Single Point scopes! One for my screen accurate DL-21 and one for my A280 build.

I agree, it does look a bit long on this. I have several options on hand - Webley 4x15, Weaver Qwik-Point S-1, Hensoldt Wetzlar ZF2x17°, M38 and M77C tank telescopes, etc. - but I'm not completely satisfied with any of them. Eventually, I'll find something that fits.

My understanding is that the movie props were made from castings of an AR-7 rifle receiver.

I have seen pistol versions of the AR-7 with the original style receiver, but they are very rare. That's what I'm planning on using, if I ever find another for sale; the last one slipped through my fingers before I could buy it.
You must log in or register to reply here.
Share:
Facebook Twitter Reddit Pinterest Tumblr WhatsApp Email Link
Top