RPF PREMIUM MEMBER
Never thought I'd see this day. I am now the proud owner of #01 Atlantean, #01 Father, and #20 Atlantean of the 20th Anniversary Editions of the Swords of Conan by Albion.

Real swords through and through. You could cut a small tree in half with the Atlantean. However, they are still in the realm of fantasy as far as weight is concerned as they all weigh about 7 1/2 pounds each. I've read that even the heaviest combat swords were on average 3 or 4 pounds. The Father's sword is a real treat to hold! The leather grip is perfect!

This has also been a an eye-opener as to how these swords are manufactured. Now that I have two Atlanteans to compare, I've been able to tell that

1) The signatures on the certificates are all stamped except for Jody Samson's.
2) There is nothing on the certificates to distinguish between the Atlantean & Father's.
3) The #1 Atlantean has more 'robust' bronze components and wider runes on the ricasso although I think the #20 is a 'prettier' sword overall.
4) The #1 is slightly longer, but this could be due to the fact that it is not sharpened and the #20 is.
5) The edition numbers are stamped on opposite sides between the two swords. They are also the inverse of each other. The #1's writing is dark and the #20's writing is light.

Here are some quick handheld photos: 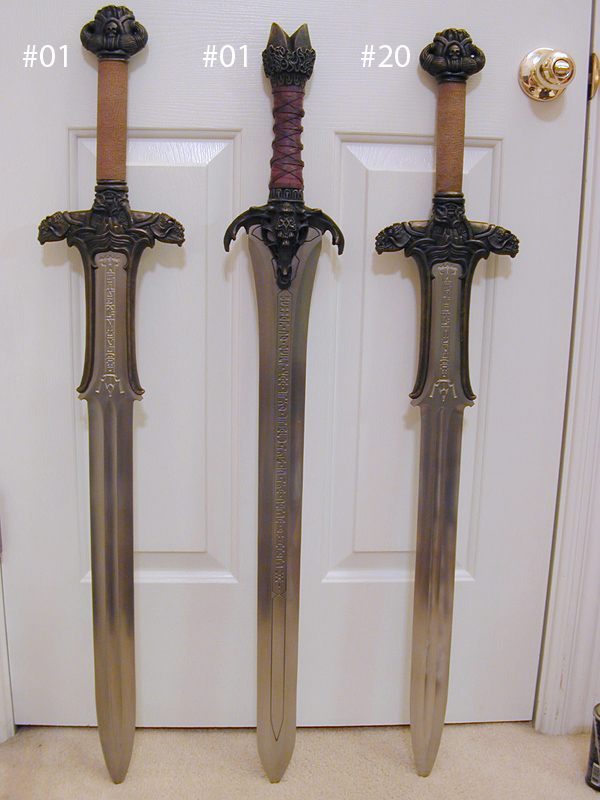 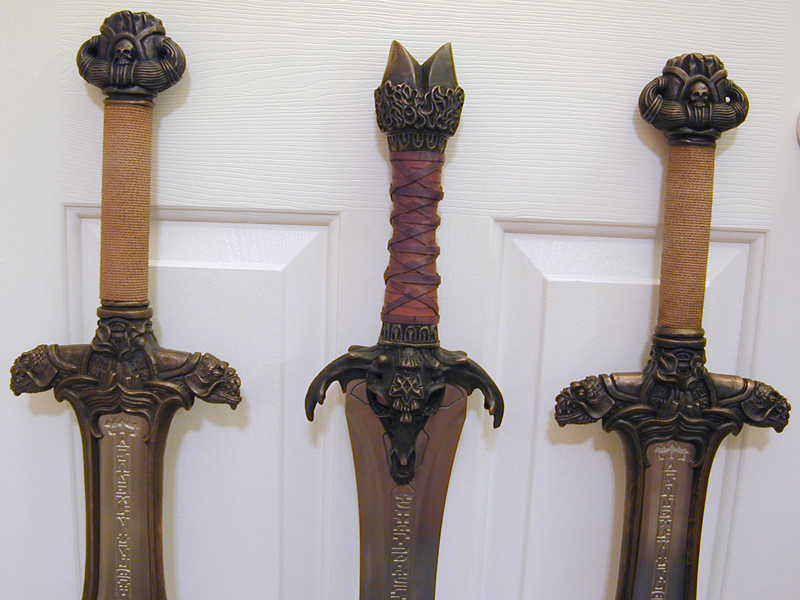 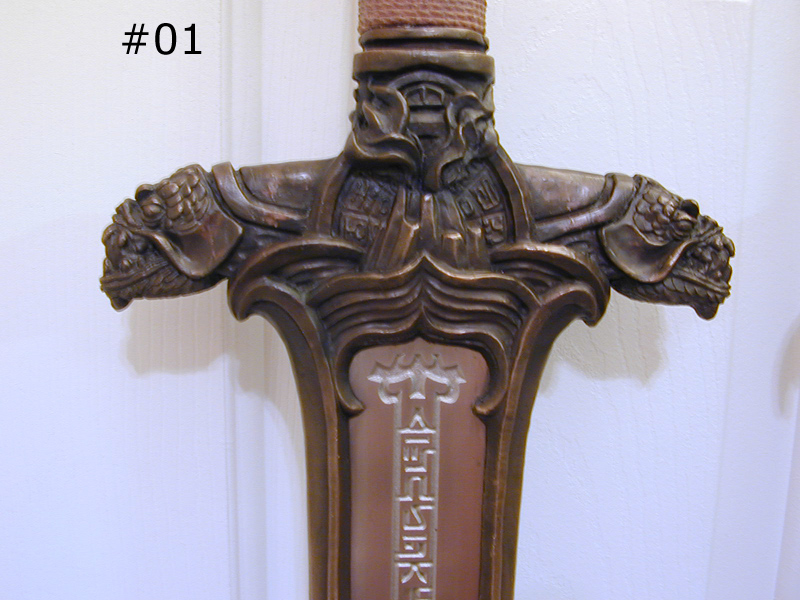 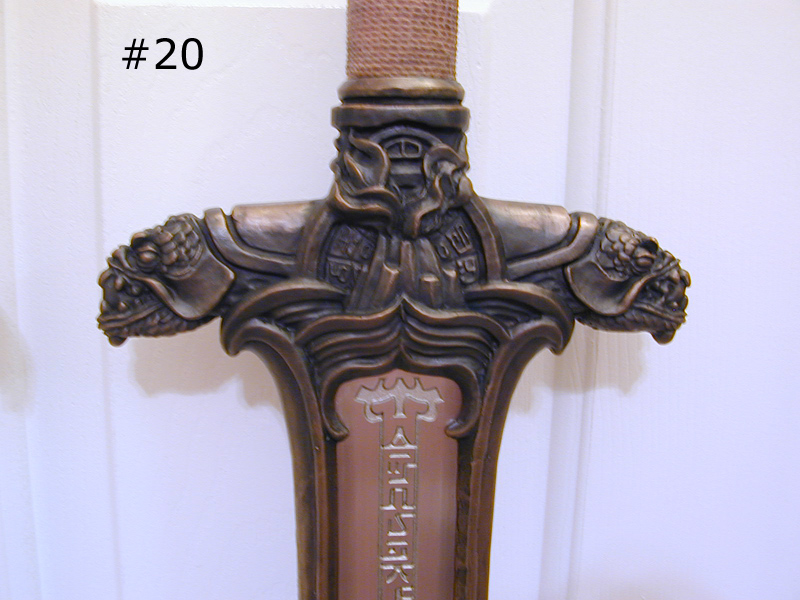 One day I hope to have the financial wherewithal to own an Albion Atlantean & Father sword. I've been following them since they were just concept drawings.

RPF PREMIUM MEMBER
Where do you live again?.

Awesome. So is the number stamped on the left or right hand side of yours?

The envy runs through my veins ...
J

What a beautiful collection.

I'm hoping that I'll be able to buy the Atlantean and the Father's sword later this year. Fingers tightly crossed.

I'd also like the double snake dagger to display with them ...
and the amulet ...

and the jade medallion ...

perhaps I should shut up and start saving. :lol

RPF PREMIUM MEMBER
Thanks everyone. These puppies will be handed down to my children and hopefully their children's children.

Kevin, I know what you mean about the amount of stuff there is to get. It seems like they've slowed down a lot, but at one time they were bragging about this list of stuff they were introducing in 'the coming months' :lol We can dream....

Beautiful collection.
Conan's Fathers sword and Vaders Light Saber were my 2 most desired props as a kid growing up loving these films.
Love them...and I'm jealous I might add....

My best friend used to own the screen used fathersword, which albion used to produce these., nice swords

I've been regularly pestering Howy for a bronze axe and matching shield...sigh...

Stamped number? No, my number (used to be) in bright bronze on the underside of the left horn (holding the blade tip down). It looked like it was made by a decal being applied, then the brass black antiquing, then the decal removed. Very classy, but as I display my sword tip down it annoyed me. So...I ran brass black over it and made the nomenclature just...go away...heh heh. Not like I'm ever going to sell the darn thing, after all.

My friend Dan kept threatening to steal my Father's Sword, so I bought him one of the $50 knock-offs floating around eBay. Those are actually a lot nicer than I expected. Well worth the fifty bucks for the prop guy on a budget

RPF PREMIUM MEMBER
Shizzle, I'm so hung up on the numbering on the Atlanteans, I didn't notice that you said FATHER'S sword. Doh. I need more coffee....

Â  Kevin, I know what you mean about the amount of stuff there is to get.Â  It seems like they've slowed down a lot, but at one time they were bragging about this list of stuff they were introducing in 'the coming months' :lolÂ  We can dream....

Jeez. It's no good, I'm going to have to sell something. Anybody around here have any white slave trade contacts?

Clutch i have said it before and i'll say it again WOW JUST WOW! It is the father's sword i really envy here as it'a always been my favorite of all time. Much as i love my Fable that albion is close to and over heaven.

Beautiful. I have always loved the Father's sword.

Thanks. Wish I could let everyone give it a good swing. I wish someone here had a Destroyer Atlantean they could post. The more I look at it, the more I like it.
T

Always loved movie steel it started back in the 80's when i was a kid running around thinking I was Ninja lol . Parents did get me a wooden one back then . Those Conan swords do command a pretty penny just look at the work that goes into them. You really must know your swords there are so many versions of each one . Did yours come in wooden crates? Great collection