Alot of the concept sketches from the Star Wars sketchbook by Joe Johnston had some really cool designs and were not far off from the final designs, I did a couple of models based on his designs.
Last edited: Sep 20, 2011

Star Wars to me is Just an expression.......an avenue to build stuff,
if I wasn't into Star Wars I would be building something anyway. I
don't think I would ever run out of things to build in regards to Star Wars
models.....props........... especially scratch-building because it just takes so
much time. I look at all the subject matter in the Chronicles book and I say.....
"Not in my life time will I get every thing I want!" LOL

I think when you have spent enough time and can pretty much
build whatever you want, the possibilities become a little endless,
so you can never be done! lol:thumbsup

I like a lot of the concepts and not so interested in others,
that's just the way it goes.......took me until now to start
liking some of episode 1 stuff! LOL

Nwerke said:
Johnston and McQuarrie sketches I'm quite keen on, for the most part. I pretty much hate the Cantwell models.
Click to expand...

totally second that. cantwell, imo, had the tastes of a 8 year old (forget where i read it - but he had a fascination with silver paint and pill bottles). also really like Johnston sketches.
G

3d-builder said:
I like a lot of the concepts and not so interested in others,
that's just the way it goes.......took me until now to start
liking some of episode 1 stuff! LOL
Click to expand...

Michael, I think you may have a fever :behave, have a relaxed day mate and take it easy. TPM is a last resort at best :lol only joking. I actually really like a lot of the concept stuff for TPM a lot more than the final design's, this pretty much across the 3 PT films for me.

Of all the ships in those movies the Jedi starfighter from Ep3 is my fav and would love to tackle it one day, Lasse's build of this was incredible and such a shame we never saw it painted.

I think part of the desire to do concept models is for the modeler in question replicating the subject to get away from the known and do the less known for a bit. I mean how many variations of an X-wing can be done? Okay, a lot still. Lets refine that and say how many variations of Luke's Red 5 X-Wing can be done? TIE Fighters if done to studio model standards typically are going to look about the same (almost clean, uniform gray shade with black panels) and many Y-wings will look similar to one another as well (how many Red Jammers have been done?).

With a concept, the rules aren't necessarily as set in stone and things have to be figured out. Translating a two dimensional sketch to 3D can reveal some problems that have to be overcome and problem solving is a skill that many good modelers love to exercise at various levels. They can throw some of their own creativity and interpretation into the subject as opposed to being pinned down to certain images and believing they have to replicate those details exactly.
M

That's just my POV but Cantwell's protos but the Sandcrawler and Skyhopper are awful. I'm pretty happy he didnt work more on the movies. Maybe his work was cool for at this time, but I cant see anything new in the design, but what McQuarrie and Johnston created was genius.

I think there're enough interesting screen-used model to be reproduced (in my case) that I'll never make any Cantwell's models (Skyhopper excepted). And if I ever build every OT Star Wars models I like, well I'll stop modelling (at least Star Wars stuff).

I came across this old thread. Very interesting reading the different takes on concept models. I like the idea of building concept models (and particularly those blurry back ground Rebel Fleet ships) is because of the reality that these studio props get expensive with all these doner kits that are require. And for me I don't have the space for keeping a lot of kits and a bugget to buy a lot of kits. Just a few good kits and your good to go.

RPF PREMIUM MEMBER
I love seeing how a final design got started- the core thinking and how it got refined by the artist's eye into the iconic craft we as so familiar with.

Sometimes a design gets lost and we end up with a weaker sister- other times they change the concept a lot and you wonder what would have happened if they stuck to the original idea.

One favorite concept which became abandoned is the Snowspeeder being the cockpit from a Y-Wing with landing skis, two BFGs and a couple of aft thrusters added.

While most of the concept models look crude and unbalanced, they are perfect for expressing various directions a design can go and watching that process is fastinating to me

RPF PREMIUM MEMBER
The Script/Story Cantwell was working from had more of a swashbuckler movie serial tone. So it's not surprising the designs are more whimsical. I find them incredibly charming for what they are. The final look of the Star Wars vehicles of course has been shaped and refined by McQuarrie and Johnston (and then all of the ILM builders). But so many of them, the X-wing,Y-Wing, TIE Fighter, Star Destroyer, especially, would never exist in their final form if they did not start with Cantwell's prototypes. He rarely gets enough credit for what he contributed IMO.

I figured I'd chime in on this since I was one of the concept model makers for the SW prequels.

The role of the concept models shifted a bit for us during the making of those films. Our models were, of course, part of the art department development of the "look" of the film - with numerous reviews and changes from Doug Chiang and George along the way. However the usage of the concept models began to take on the role as "3D blueprints" as John Goodson used to put it. Our models became references for all the different departments. The CG models, the practical models and the full sized set pieces had to match one another, so our models became the touchstones that each department used. We needed to take the finish of our concept models further than what had been done on the original films.
John even joked to me one day by saying "You know, one day these are gonna be Happy Meal toys."

Some of our concept models even became shooting models!
My MTT concept model was almost 2 feet long, and was later used in the film in addition the other different sized models of the MTT (there was a 6 footer, some about 8 inches long, and some tiny versions - roughly 2"). So the 2 footer blurs the line between "concept" and "shooting" model, because it is both.

So I don't see why concept models shouldn't carry the same legitimacy as shooting models. They were an integral part of the production of the film.

Love the concepts models/drawings...they tend to come back in other movies. Lots to do for years to come

The McQuarrie X wing. Now thats a work of art! My all time favorite. 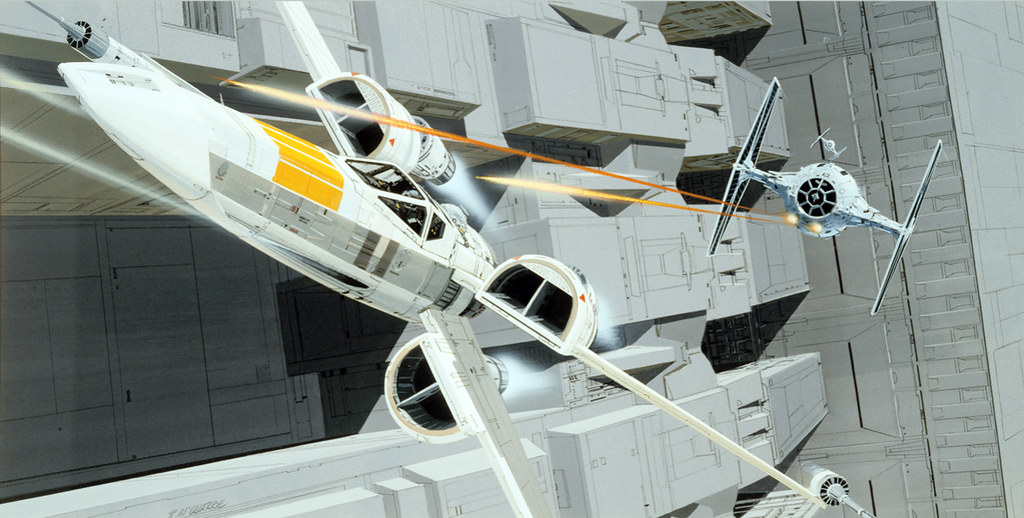