As clunky and relatively contemporary as these rifle props were, they are still endearing to some, and they did serve a purpose, especially in the awkward mits of a 1978 toaster.

In a discussion with Andrew Probert, designer for the original look of the classic Cylons back in 1978, he described the design as 'Neo-Greek', with the odd inclusion of swords, and bayonette tipped rifles in their arsenal.

It is my understanding that the Cylons were originally deprived of any contemporary looking firearm altogether, and that initially, the right arm cannon was to serve as their primary weapon. Interestingly, the new BSG series has reverted back to this, and I'm not sure if this was even intentional. In the original show, it is my presumption that the characters probably looked a little silly pointing their arms at people, especially if they weren't firing.

Here are the images of the prop, cast in polyester, and urethane foam filled, with a translucent cast nozzle, and removable acrylic bayonette. The base rifle model was honed by our beloved Morganthirteen, and serves as our first public collaboration. Thanks for looking. 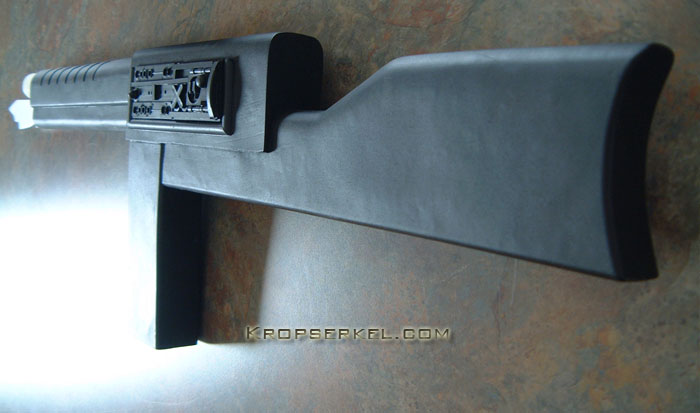 Good job. So, how much are they and will you be adding any lights & sound?

Excellent work. That sure is a unusual design, but I love it...and as usual, I totally wanted one as a kid. Really cool / clunky feel to it. Nice mastering by Morganthirteen as well. This should be a nice addition to your fine costume.

So what's next, the sword??

That is an excellent job. It would make a nice addition to the 2 colonial blasters I have.....

So what's next, the sword??

Thanks everyone for the kind words. I know this prop is ugly, but it's actually a bit of an improvement over the original in that the 'barrel' section is formed in one piece, as opposed to an acrylic tube taped to the top of the weapon body, with black electrical tape no less. Television is very forgiving, but personal, first hand encounters, aren't.

The electronic aspects of this piece are still being considered, but shouldn't be too difficult to implement with our current building scheme. The body is large enough to house components, and we could readily design a nice configuration, with a decent sized driver and speaker for sound.

Jeeves. Where have you been? We've done the sword and scabbard more than a year ago.
Check out the page with our costume (and video link) at Kropserkel Cylon page

Thanks again for all the kind words.

RPF PREMIUM MEMBER
The Cylon Rifle was always a mystery. Much of the detail is obscured by the flare camera lens. I loved the original series.

I had heard many of them were for the most part vacuum formed parts that were assembled with black electrical tape.

RPF PREMIUM MEMBER
Brilliant execution of a unique design. I loved them when it was hard to see on TV exactly what they looked like. Years later, when photos appeared of the originals, I was underwhelmed. But your joint efforts here make me want one all over again.

This looks a thousand times better than the originals if you've seen one up close.

Excellent rifle there, and well done!!